Cycling in France, it's a dream for many and has been a dream come true for our Australian PEZ man in France, Chris Selden who has been living in various parts of France since 2008. Now Chris is sharing his dream with others after he has bought and renovated a beautiful old house in the South of France that he is renting out for visiting cyclists.

They say it's easy to fall in love but harder to part and nothing could be truer than that when it comes to my love affair with France. I first fell for her back in 1991 when her amazing landscapes were beamed into my house in Sydney, Australia on a nightly basis as we finally got daily Tour de France TV coverage. The mountains, the little villages, the history, landscapes - yep, I was in love. Unfortunately for me ours would be a long distance relationship that would only come to life every July for many years until I finally got the opportunity to ride and race in France during two seasons in 2003 & 2004. 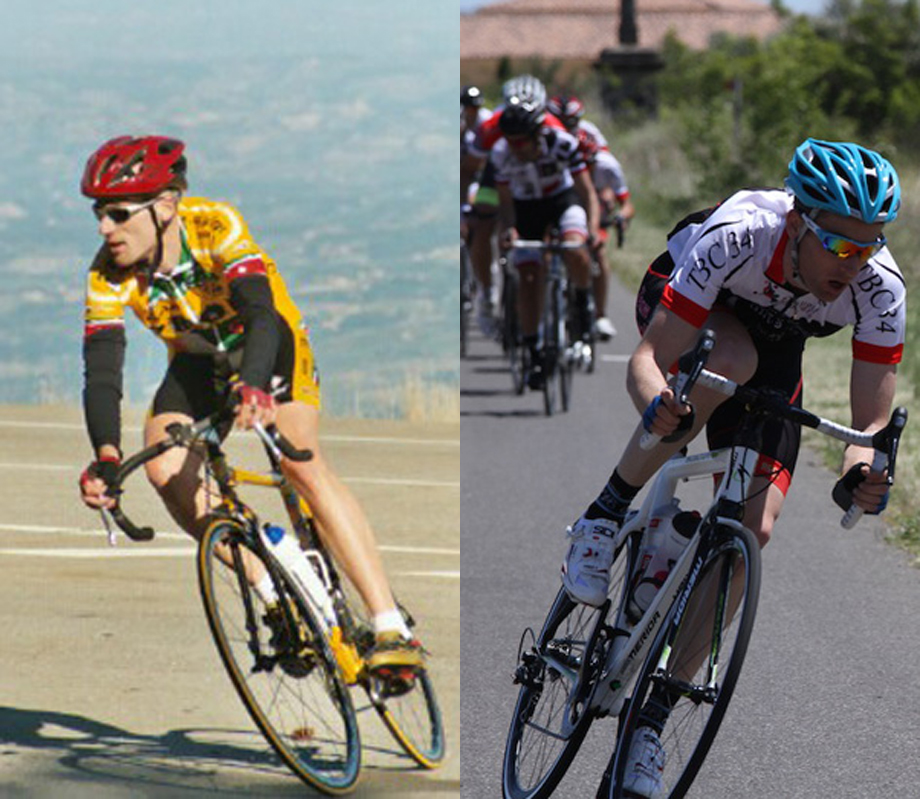 During those two years of racing I got to know France close up and fell even further in love and started to get a deeper understanding of her, the language and the culture. Sadly when my racing time ended it was time to say goodbye but goodbyes weren't forever though as I managed to keep coming back as a cycling tourist on many occasions until one day in 2008 I met my true love - my French wife!

First loves never quite die though and my wife was more than ok about me continuing to see France as much as possible with my bike. My adventurous spirit and my bicycle have taken me all over the country and although the most famous regions like the Alps and the Pyrennees are truly magic places it's in the Hérault Valley in the South of France where I've really found my own piece of paradise. 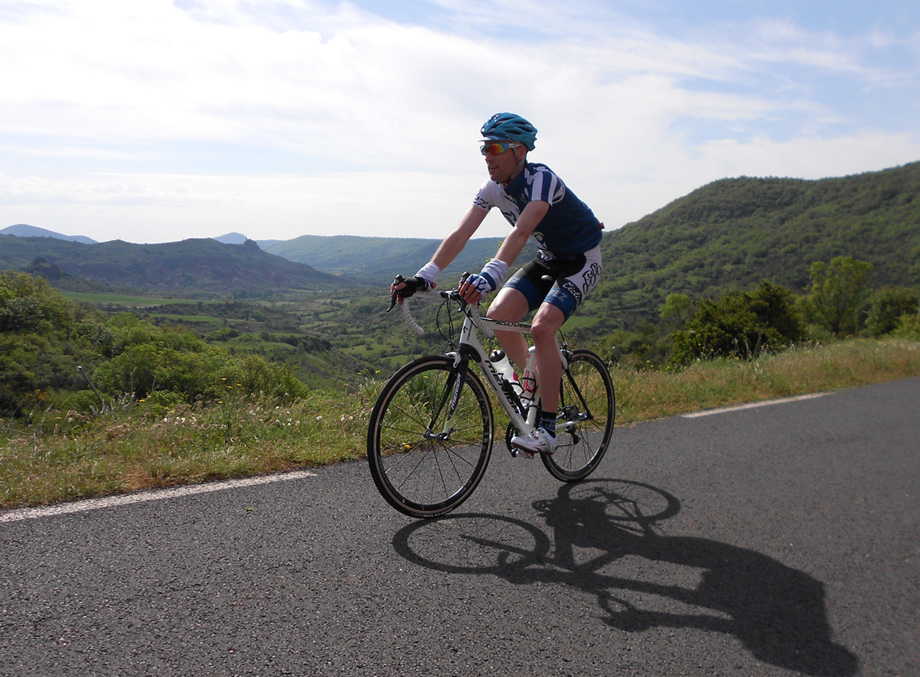 Chris enjoying his paradise in the Herault Valley 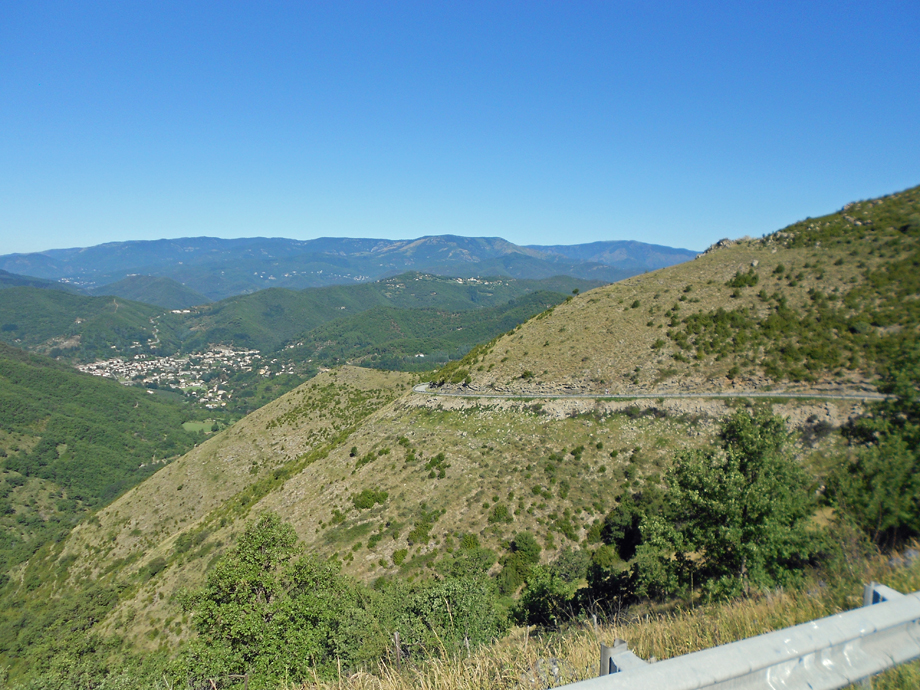 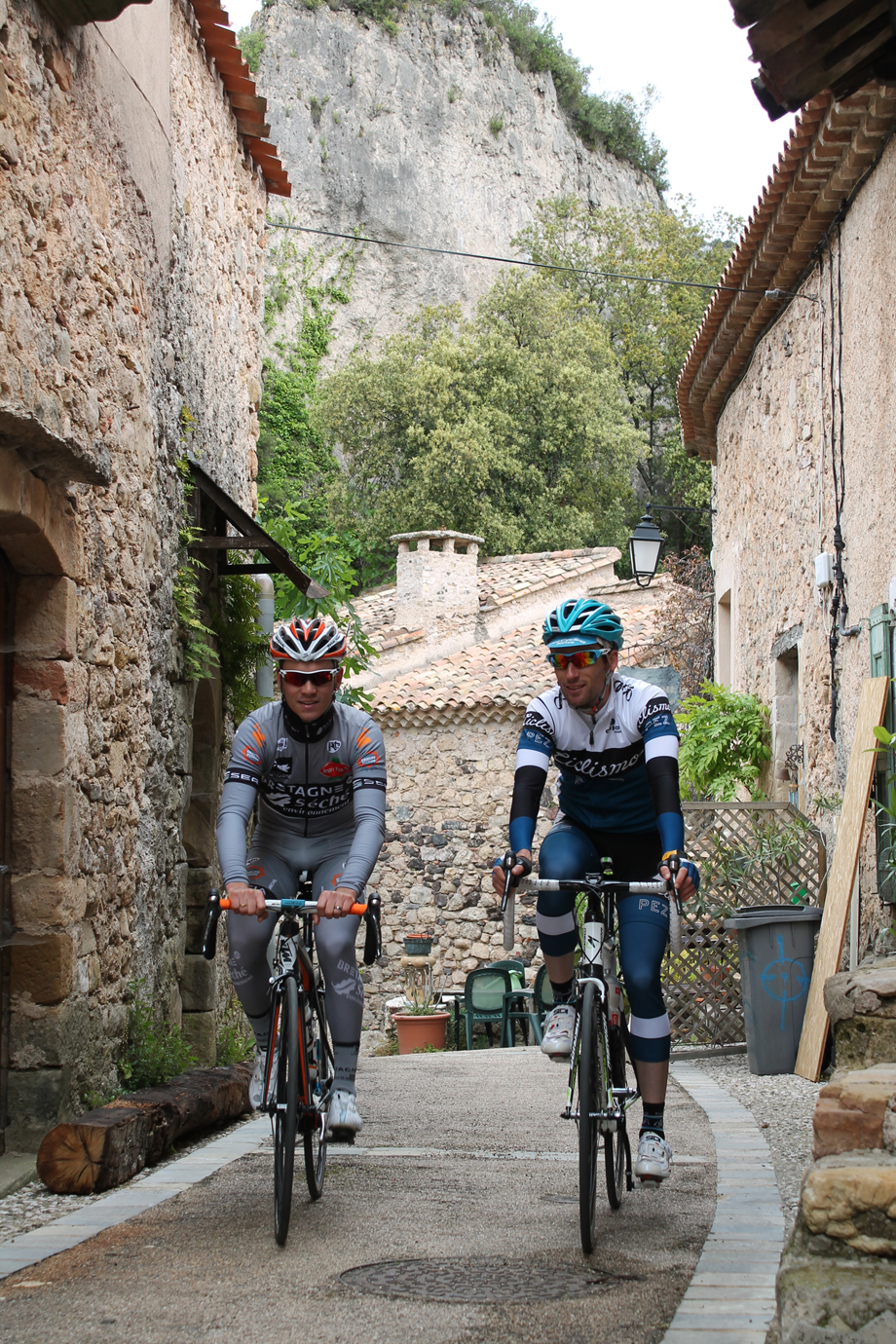 Cycling in the Hérault Valley in the South of France just has so many advantages; quiet roads, challenging and varied terrain, amazing landscapes, beautiful villages, friendly locals and more. When I moved here I told my wife that one day I would like to open a gite for cyclists from around the world to share this piece of paradise with. Fast forward 5 years later and here we are in 2017 and we've finally done it, opening the doors this past October. The road hasn't been easy though! 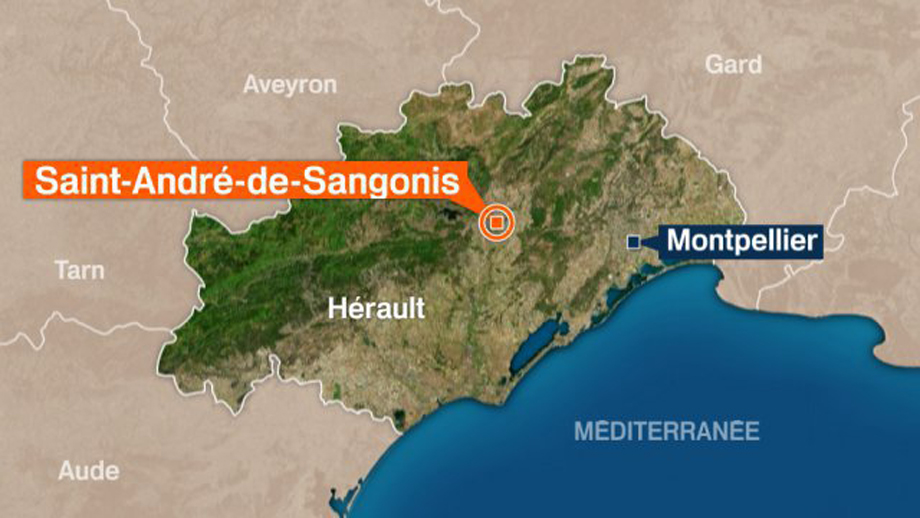 The House
I'd found the perfect region to ride in and I knew that I wanted my cycling gite to be either in or close to my village of Saint André de Sangonis now I just needed to find the money......and the house of course! Both these steps proved to be long and difficult roads but at the start of 2017 I finally found the perfect place. Run down and extremely out of date but with huge potential with a great location, private courtyard, garage for bikes and just the right size - it was renovation time! 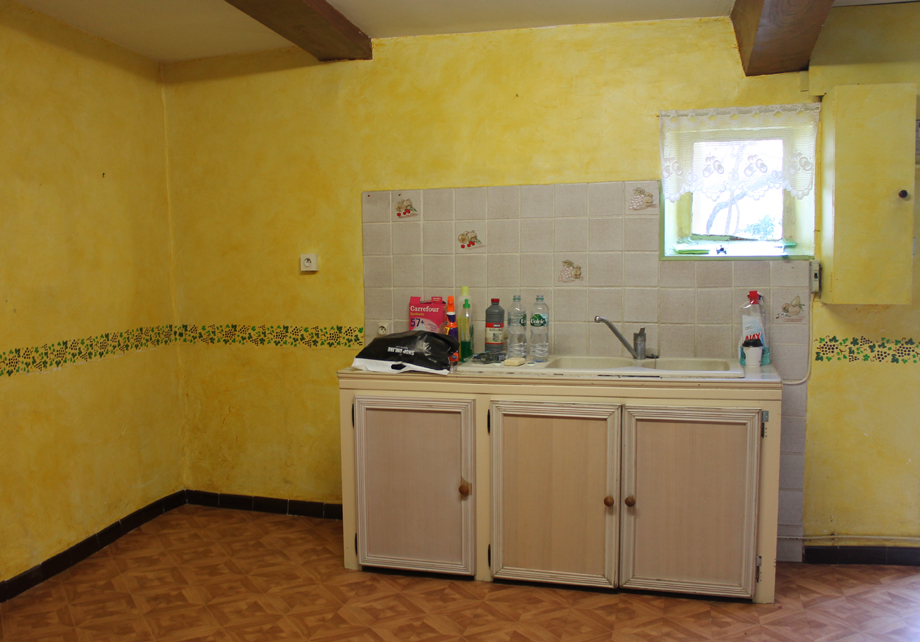 The kitchen needed a little work... 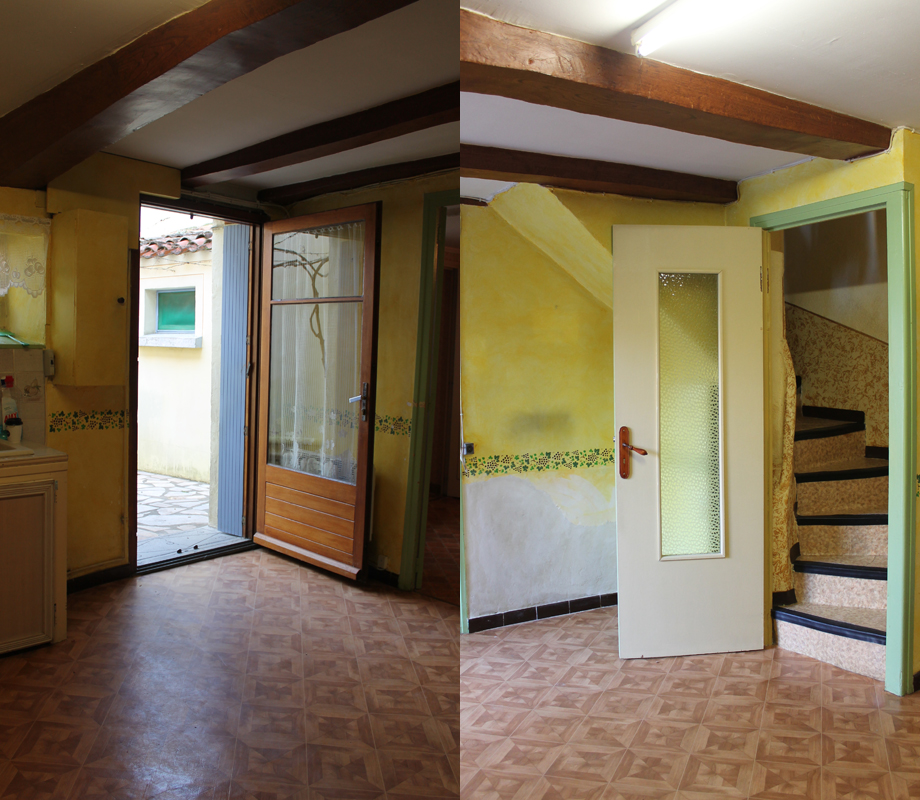 As did the whole house! 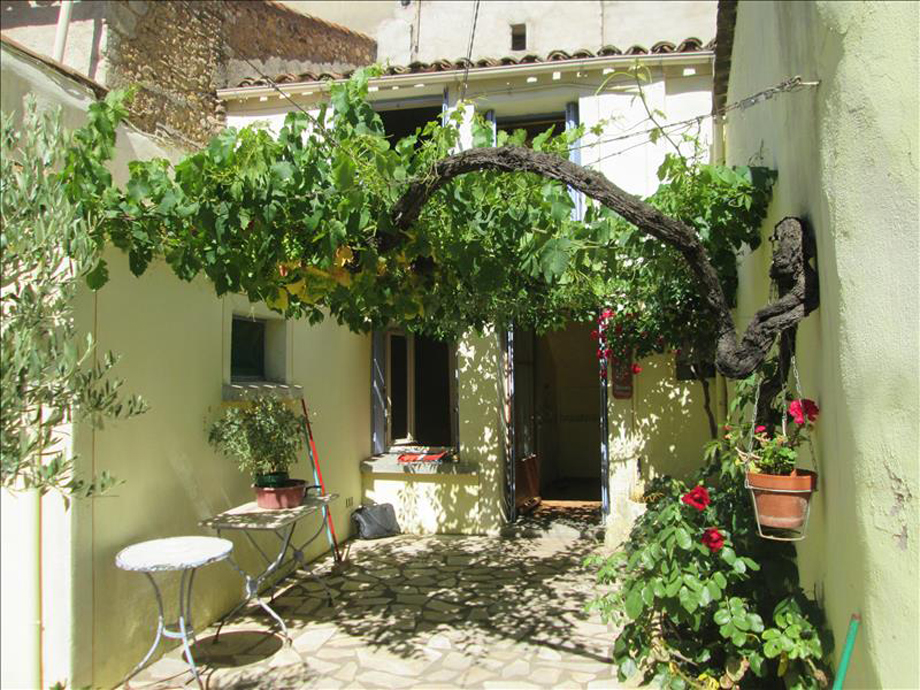 The potential was there with its private courtyard and very 'French' feel - even pre-renovation the place felt right.

The Finished Product
Six months of smashing down walls, changing layouts, installing new floors, walls, electricty, plumbing and more followed but finally it was finished. During the renovations my wife had come up with the perfect name for it, 'Maison Cachée' or 'Hidden House' and we were now ready for business. We call it the Hidden House as it's actually set back off the little laneway that it's located on and behind another row of houses with its own private courtyard, completely hidden away from everybody. 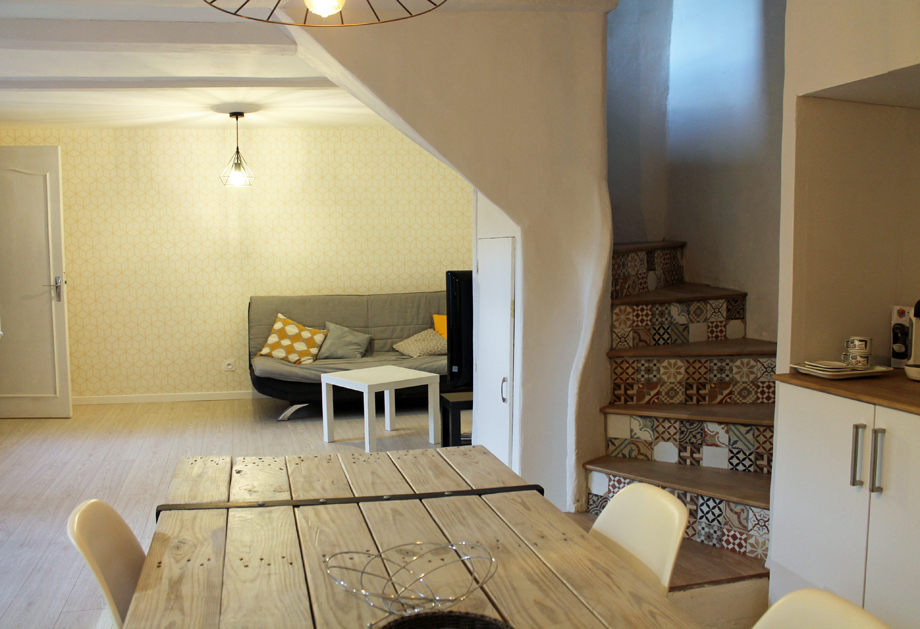 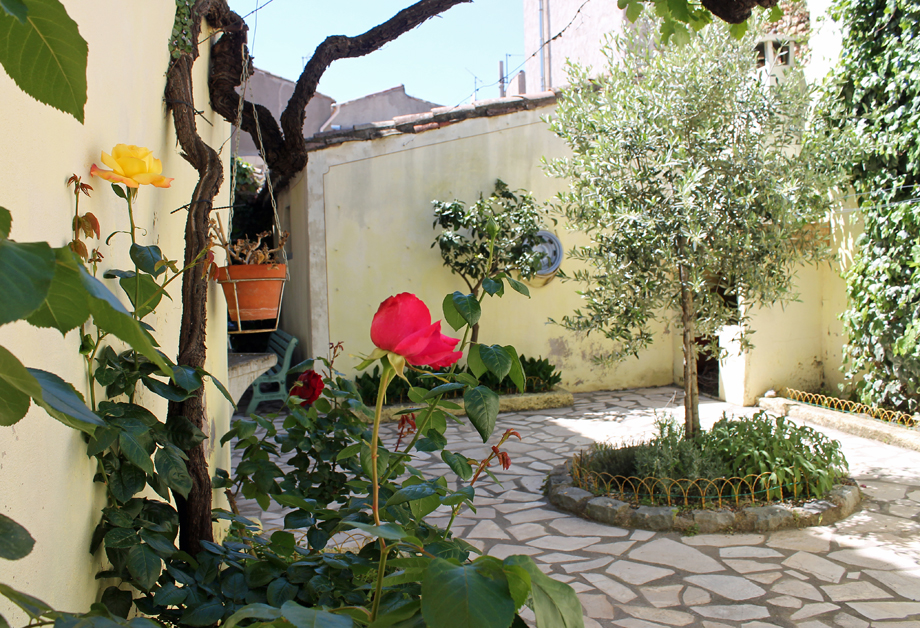 Looking out onto the courtyard and the bike garage 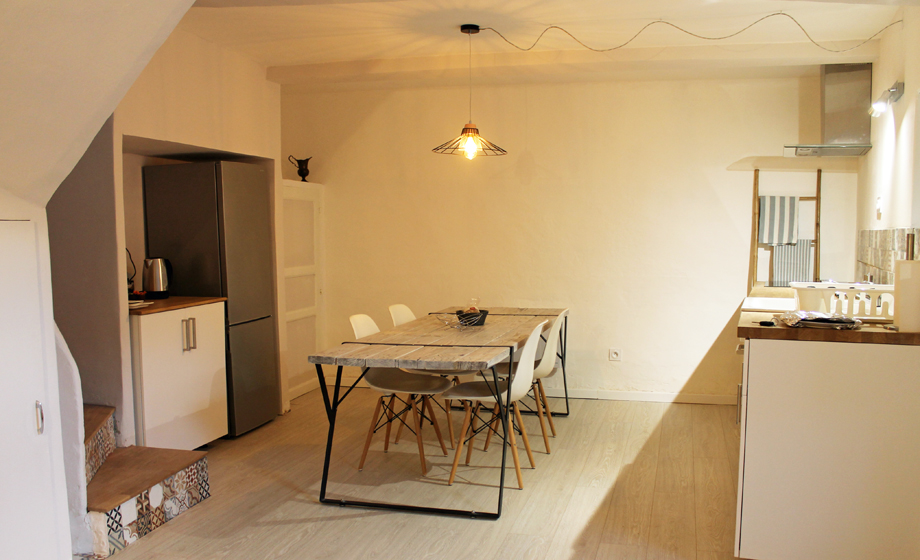 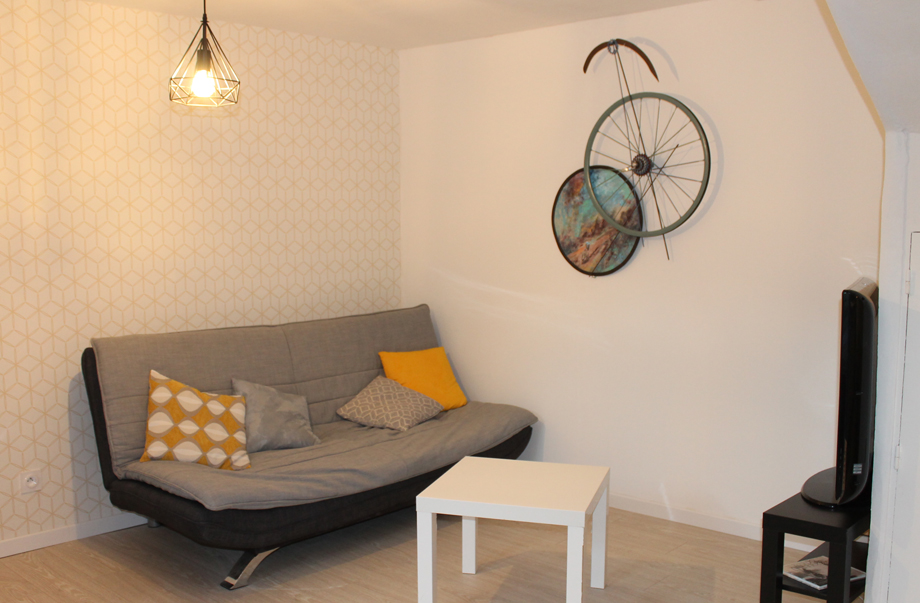 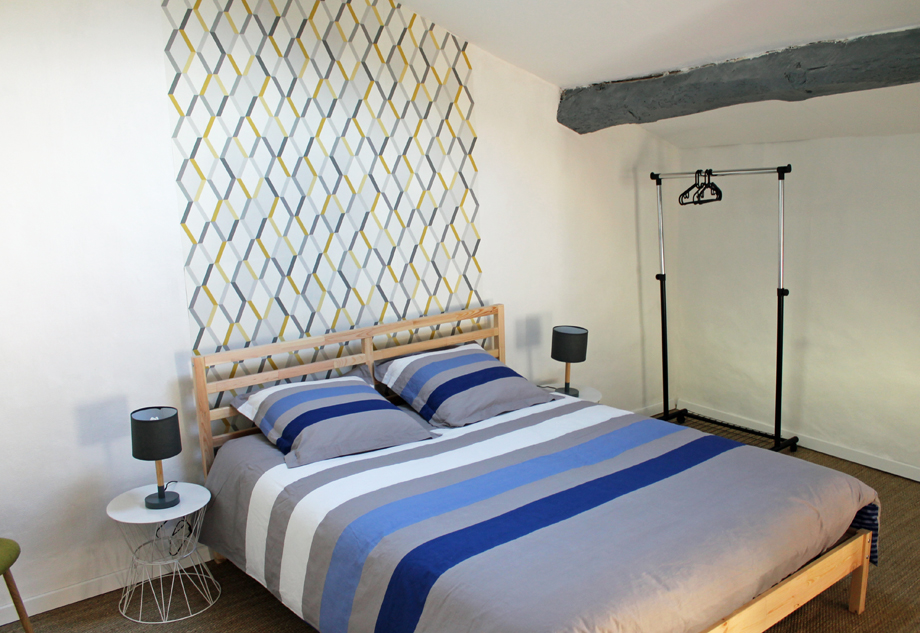 Hidden House is now a modern two bedroom place that is private, bright and airy

Riding in the Region
I've previously written about riding in the region here on Pez and I'm often asked what it's really like, how do I compare it with other regions where I've lived, raced or ridden? I tend to answer this question with a long winded reply as the region is difficult to describe briefly because it's so varied but today I will try to be concise....

There are the rolling hills with vineyards, the flatter roads closer to the Mediterranean coastline, the challenging hills and then the seriously challenging mountains. There's a little bit of everything in the Herault! 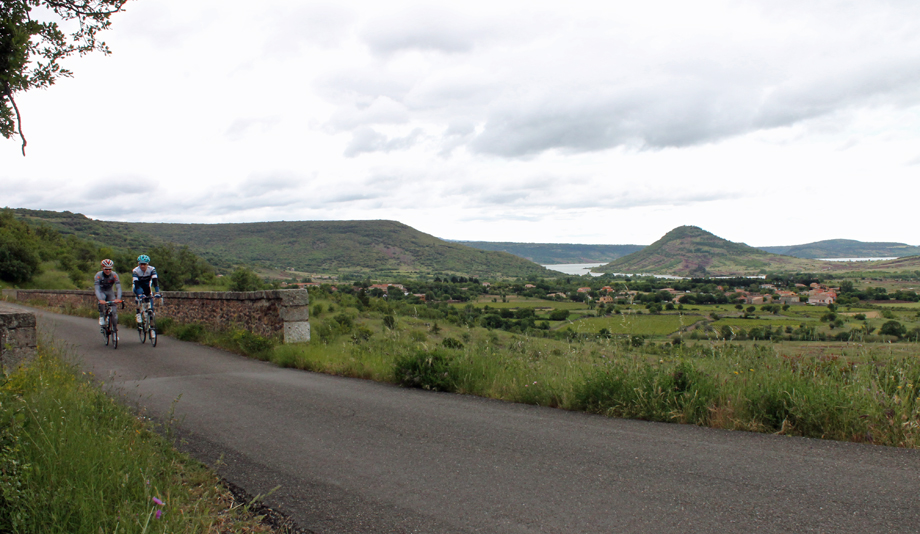 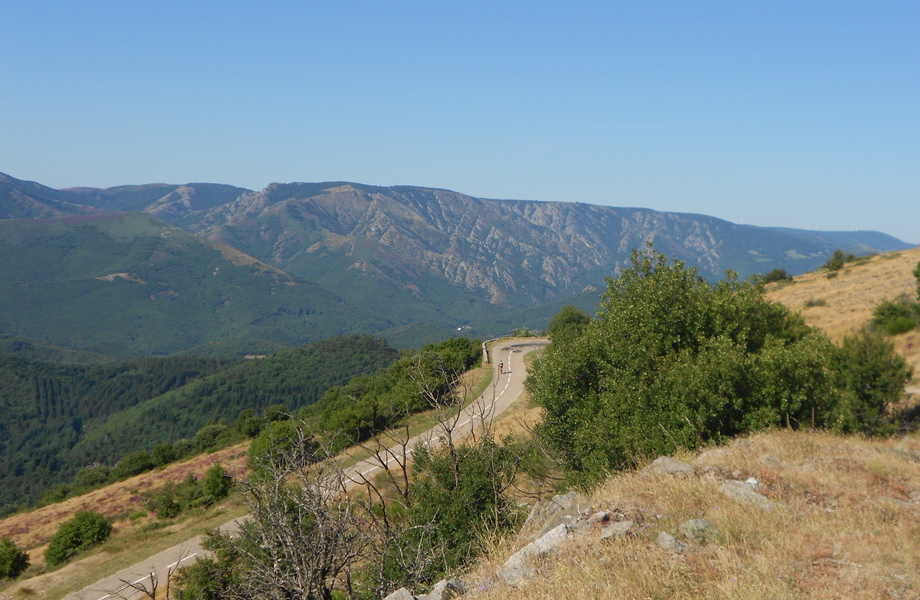 Whilst not as high or as long as the Alps the mountains in the region certainly can pack a punch and big climbing days are possible. One popular spot amongst hikers and cyclists alike is the Cirque de Navacelles, an amazing cratered landscape with tiny lost villages and isolated roads winding their way up and down into this massive crater. 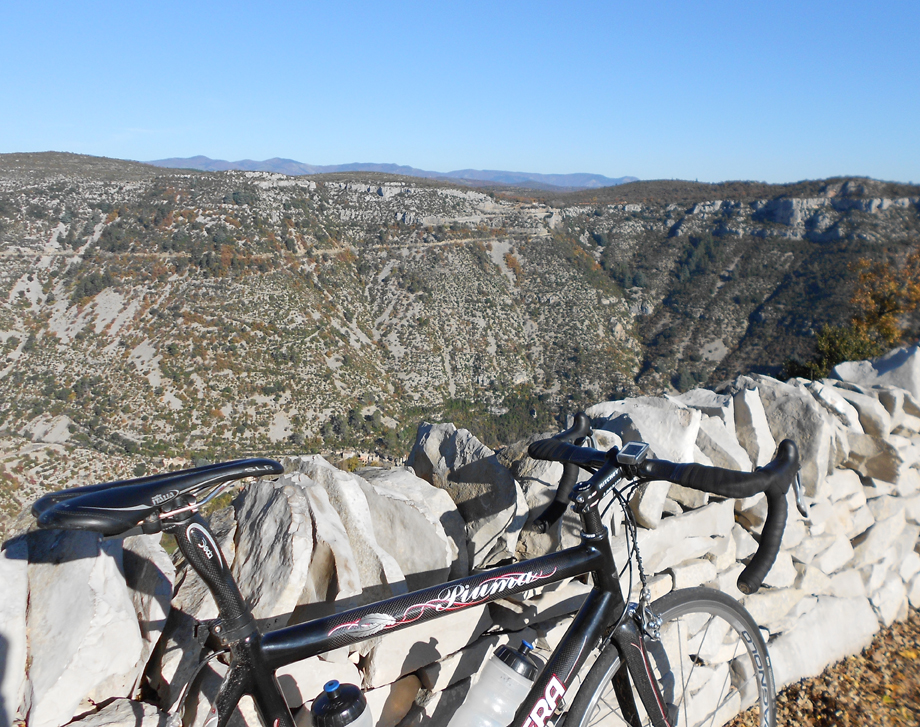 A quick pause at the top of the Cirque before descending down one side and choosing the easiest way back up.... 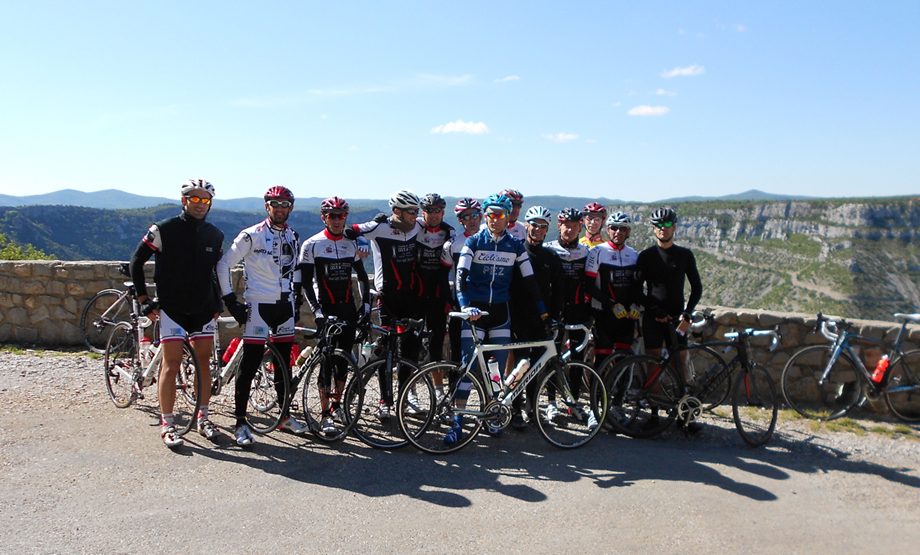 Group photo time at the top of the Navacelles midway through another epic Sunday morning winter's ride with the local club, Team Baudille Cyclisme

The highest climbs of the region approach the 1000m altitude mark but you can also ride down to 0m altitude and visit the beaches on the Mediterranean. From my village of Saint André de Sangonis great cycling can be had by leaving in any direction and I do so depending on my mood of the day and what type of riding I'd like to do. More often than not though I like to find the smallest, seemingly abandoned roads that wind their way through the countryside in this region and then arrive kilometres later at some amazing village. 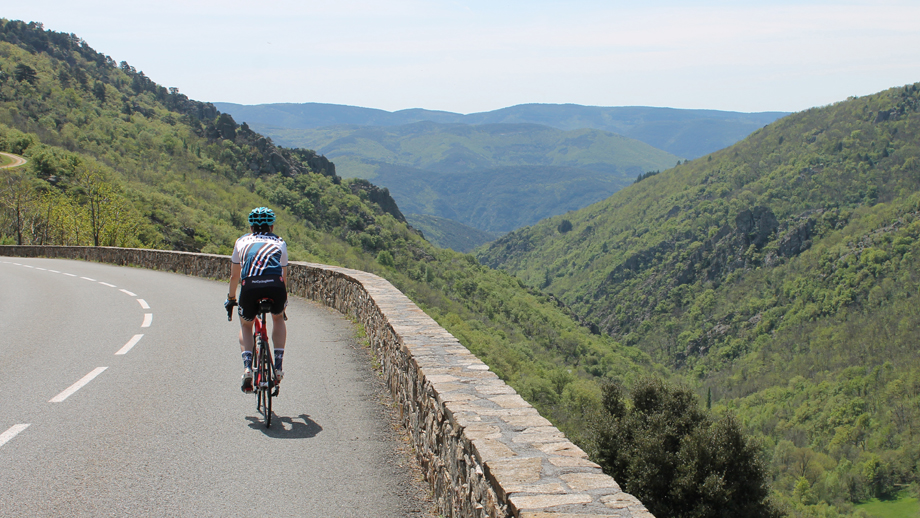 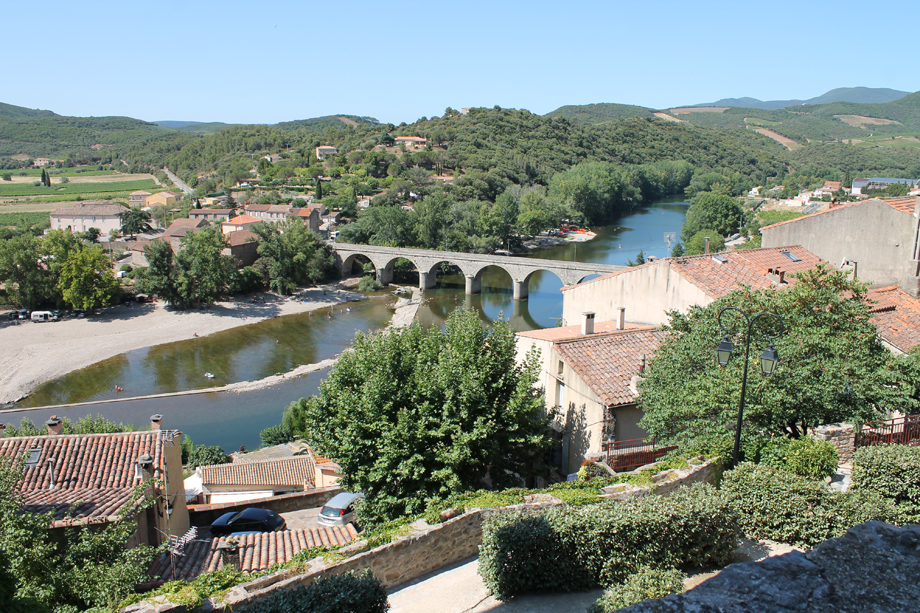 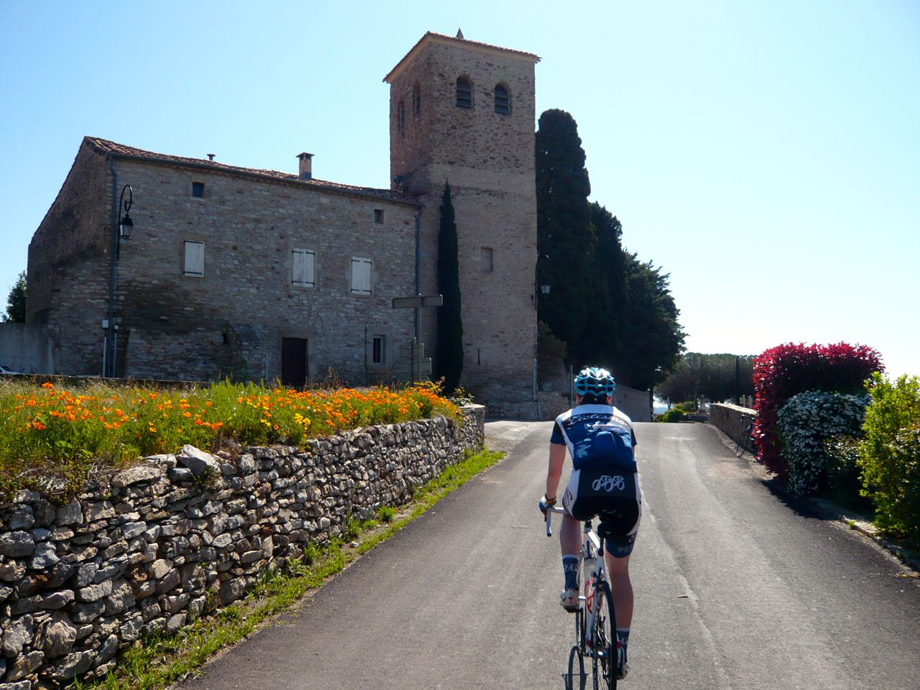 When we talk cycling in France the topic of the Tour de France normally comes up of course and evidence of names painted on the road from past editions is present on many of my training roads. The Tour de France normally passes through the region as we're positioned halfway between the Alps and the Pyrenees and often it will be a sprint stage finishing in the big city of Montpellier (35km east of Hidden House) but there are also opportunities for so much more than a flat stage.

Before I lived in the region there has been team time trials just down the road from Hidden House and also transition stages that have taken in some of the smaller hills and mountains on offer. Next year it's time for another transition stage as Stage 15 of the 2018 TDF leaves from Millau (1 hour north) through some of the best scenic areas that the greater region has on offer to then pass over the beautiful but very tough climb of the Pic de Noire just before arriving in the ancient castle city of Carcassonne (90 minutes South west). 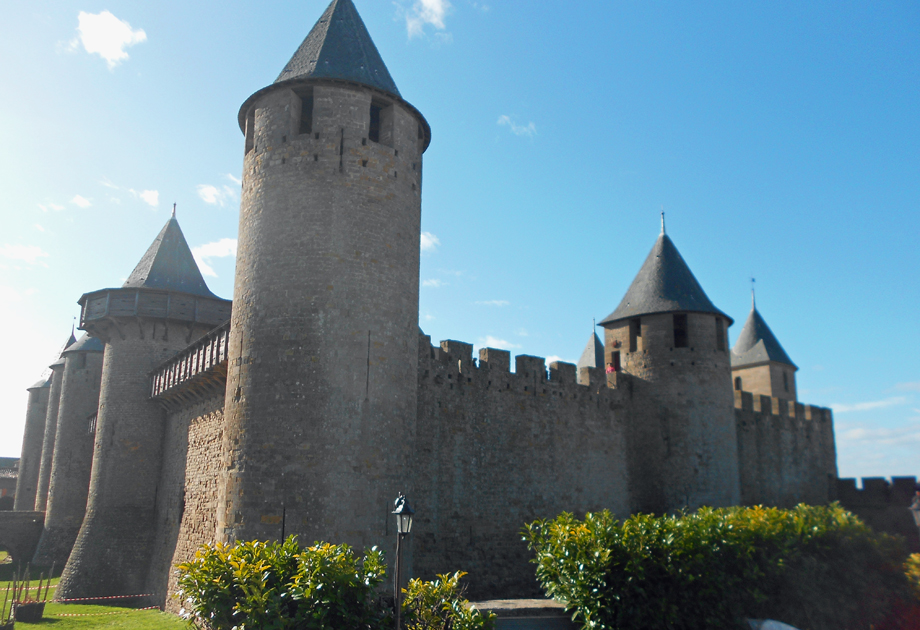 I'll certainly be there and I hope to see some Pez fans next year too as my whole idea behind the Hidden House gite is to share this great region with as many cyclists from around the world and to let them experience the region that has come in at No.4 in the Lonely Planet's Top 10 regions to visit in 2018. For less than the price of a basic room in a hotel you and some cycling friends or loved ones can rent out the whole Hidden House and experience the true Southern French lifestyle, living as a local in the heart of the village. (Hidden House sleeps from 1 - 6 people).

There are a mouthwatering 4 boulangeries (bakeries) in the village where you can buy your daily baguette and croissants, a supermarket, restaurants etc plus a weekly farmers' market to buy fresh fruit, vegetables, olives, cheese, meat, wine and more direct from the producers. There are also a number of cultural festivals and activities throughout the year, cyclosportives, triathlons, MTB races and more to experience plus even more famous cycling locations like Mt Ventoux are just a short drive away.

Drop me a line at [email protected] and check out my website hiddenhouse34.com for more info on Hidden House and the region and planning a super cycling holiday in the South of France. You can also follow me on instagram at hiddenhouse34 and facebook.
▲ BACK TO TOP ▲
Related Stories
﻿