How deep can you go and how much do you have left in the tank? Part of it is how much you are willing to suffer, but the bigger picture is how much energy you still have to spare during the ride. What if there was a way to model and monitor that in your training?


Fatigue Management in Racing
In racing though, fatigue management involves “saving matches” and expending as little energy as possible before firing off your main, race-winning attack. This isn’t just about avoiding stupid early attacks. Every little extra effort you have to make will cost you later on. Whether it’s poor positioning in the pack exposing you to too much wind or having to accelerate out of each corner because you are stuck at the back, racing smarts can complement fitness.

The mantra during time trials is pacing, which is another word for not going so hard so early that you blow up before the finish line. The biggest mistake is screaming off the line early because you feel fresh, because that often digs you such a deep hole of fatigue that you end up losing more time later on that what you gained early.

The same constant decisions must be made during time trials whenever there is a hill or headwind. How much above your threshold should you push up that hill and how long should you try to sustain that effort? Or would it be better to shift down and take it a bit easier? Part of this decision comes down to your anaerobic capacity, along with race situations such as the length of the hill and its location on the course.

Fatigue Management in Training
Training is all about increasing this well of energy that you can draw upon. Even if we don’t have a power meter, most of us are by now familiar with the basic concept of Functional Threshold Power, which is the maximal power that we can sustain over a 60 minute effort. Basically, this is a good measure of your sustained aerobic capacity. And since almost all disciplines of cycling is aerobically-dominant, the crux of cycling training involves maximizing FTP.

Training is all about appropriate stress and recovery. This happens on a macro level of season-long planning to arrive at your “A” events at optimal fitness and freshness, a state where you are as fit as you can be but also as recovered as possible. On a more short-term level, this is also why we typically insert a recovery week after every 3-4 weeks of hard training, permitting our body to recover and hopefully become stronger.

Stress and recovery also happens on a daily basis, where you space individual intervals with enough recovery to permit you to go hard again on the next interval. The other goal with interval sessions is to do enough quality intervals but not too many. That is, you need to do intervals as hard as you can, but you need to stop when you become so fatigued that doing another interval will just be counterproductive.

Xert and Maximal Power Available
A new Toronto, Canada-based startup, Xert, is producing a cycling analysis website that I have been playing with as a beta-tester the last week or two, and I’m finding some of its concepts extremely intriguing. Disclosure: there are no financial or other conflicts of interest between myself and the company behind the website.

Among many different ideas, the major new concept from Xert that I’m most intrigued by is real-time fatigue monitoring through its Maximal Power Available (MPA) analysis. In broad strokes, it is anchored (in watts) at your peak 1 second power. From there, the MPA line drops or rises throughout your ride based on your efforts to that point in time. 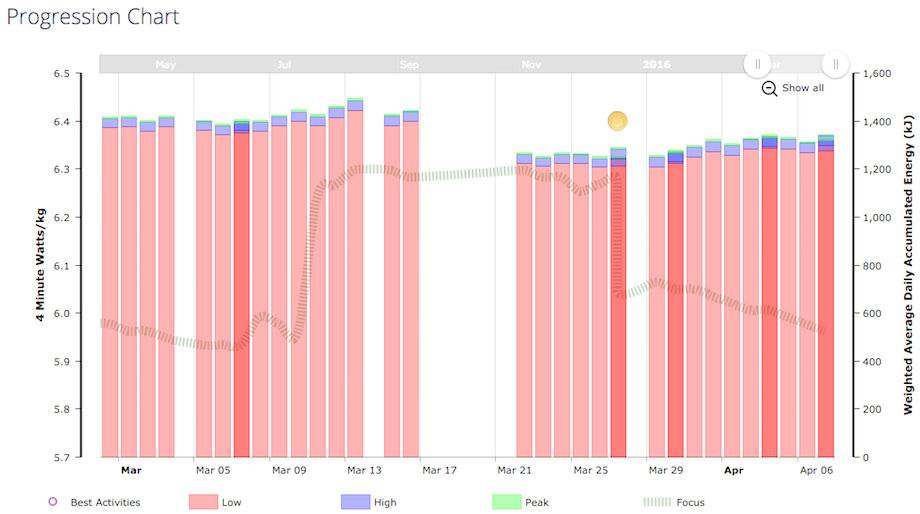 Xert does all that you expect from a training log, with data directly downloadable from Strava or TrainingPeaks. You can see your prior workouts and how much energy was modelled as coming from below threshold (red), above threshold (blue), and near peak power (green). The gold circle highlights a breakthrough workout.

The MPA is modelled on a wide range of factors. Some of this derives from your individual fitness such as your aerobic (Threshold power in watts, roughly analogous to the familiar FTP) and anaerobic (High Intensity Energy in kilojoules, or how much energy you have in reserve above your threshold) capacity. And some of MPA is also derived from basic physiological principles, such as the rate of glycogen depletion over time. I’m not currently privy to the modelling, and this isn’t the point of this article as opposed to the general idea.

How does this work in reality? Theoretically, you should never be able to exert more power than what you have available at that point of time. So your instantaneous power should never be higher than your MPA. 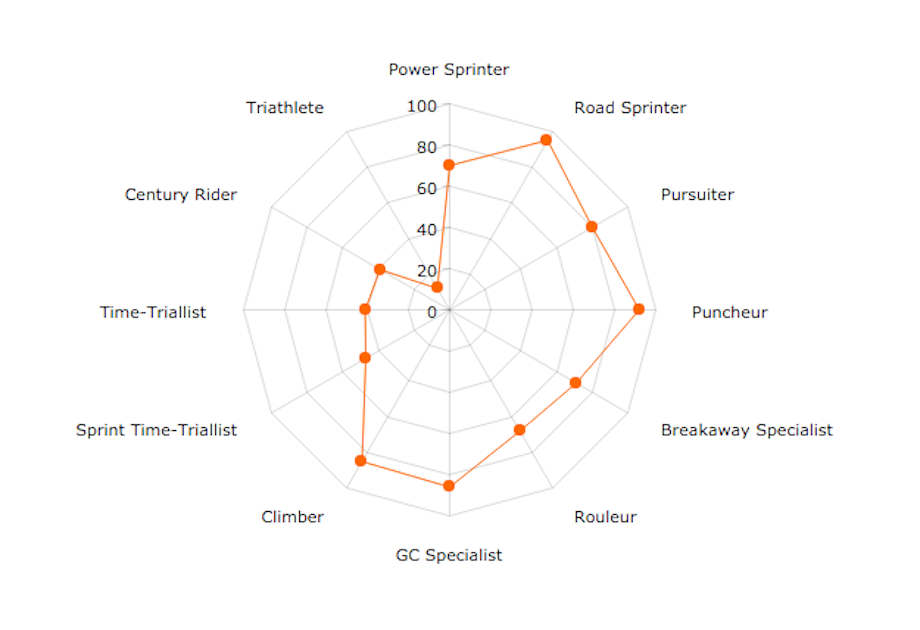 Xert can provide a view of your overall profile relative to others in its database. Each of the rider types correspond to peak wattage over different time periods (e.g., “Power Sprinter” is 10 s, “Puncheur” is 4 min, “GC” is 8 min, and “Time-Trialist” is 1 h).

With Xert, it will automatically calculate your Fitness Signature based on these three numbers (Peak Power, High Intensity Energy, Threshold Power) over your entire database of rides, adjusting these values as it goes and new rides are added. So you get a nice tracking of your progress over time.

You can also manually adjust the different components of your fitness signature based on an individual ride. One advantage of this is that you are not restricted to relying on defined testing to gauge your fitness, as some people just do not test well and testing can also be tricky to schedule into a training schedule.

Does MPA Relate to Racing?
So how does MPA track over the course of a hard ride? At the end of March, I did my first race of the season, the Heck of the North “Open Category” road race north of Toronto. The 70 km race had 100 starters, and was held in frigid (started -2°C) weather over continuous rolling roads that ranged up to a max of 19%. Let’s just say that it was a wickedly hard race. I hid in the pack for 52 km until a stretch of gravel rollers did me in. I soloed the remainder, but got caught by 4 guys less than 1 km from the line and had to do a final sprint for 48th place overall.

My FTP is 260 W with a weight of 65 kg. The race was screaming right from the gun. You can see from the file screenshot just how many efforts there were throughout that were way above this FTP, and how many were way above 400 W. The first 52 km (77 minutes), we averaged 218 W. You can see on the right side of the graph (about 1:17 into the race) where I finally got dropped and soloed in, with a much more even distribution of power. Then there was the final sprint with my peak power for the day.

What is interesting is how my MPA gradually dropped the first 20 minutes or so (rollers with a tailwind), then recovered a bit and stabilized before plummeting at about 38 minutes. This coincided with a very long stretch of steep rollers straight into a headwind.

Looking at a closeup of this headwind rollers stretch, you can see how MPA dropped perilously close to my instantaneous power. A couple of points along this stretch, I did get slightly gapped and had to make even bigger efforts to get back into the safety of the pack, relying on maximizing momentum gained during downhills.

If your power does rise above the modelled MPA, you can adjust Peak Power, High Intensity Energy, or Threshold Power, and then save this as your new fitness signature.

Once I got dropped, I did a solo effort that also averaged the same (~215 W) as when I was in the group. But MPA, as expected, rose back to near baseline because the steadier nature of the effort meant that I wasn’t as fatigued from constantly going above threshold.

The MPA again dropped during the final surge to the line, and my peak power during the sprint of almost 1,000 W came close to the MPA.

Summary
I’m just in the early stages of playing with Xert, but I think the idea of MPA modelling can really change the way we monitor training, both in its post-ride analysis but also potentially real-time monitoring. For example, Xert has just come out with a Garmin app that can provide real-time colour-coded information on your fatigue status. I have not started playing with this yet, but I can see how this might be a useful tool for planning and executing workouts.

It will be interesting to see this modelling of fatigue progress, and I’ll be exploring more about its potential applications in future.

Stephen Cheung is a Canada Research Chair at Brock University, and has published over 90 scientific articles and book chapters dealing with the effects of thermal and hypoxic stress on human physiology and performance. Stephen’s Cutting-Edge Cycling, a book on the science of cycling, came out April 2012, and he is currently co-editing a followup book “Cycling Science” with Dr. Mikel Zabala from the Movistar Pro Cycling Team. Stephen can be reached for comments at [email protected] .
▲ BACK TO TOP ▲
Related Stories
﻿