Toolbox: Hydration continues to be a hotly debated topic in sport science. That debate extends even to winter when conditions are cool. Equally, it is an issue when training indoors. What are some of the considerations for cycling hydration this winter season?

There remains no clear consensus on the proper amount and type of fluid to drink during exercise. Recent highly-publicized work by our own Toolbox Editor Dr. Stephen Cheung demonstrated that 3% body weight loss had no impact on time trial performance in the heat. However, it remains true that dehydration CAN be a negative factor for some riders, especially due to body fluid balance influencing a wide range of physiological responses and functions. 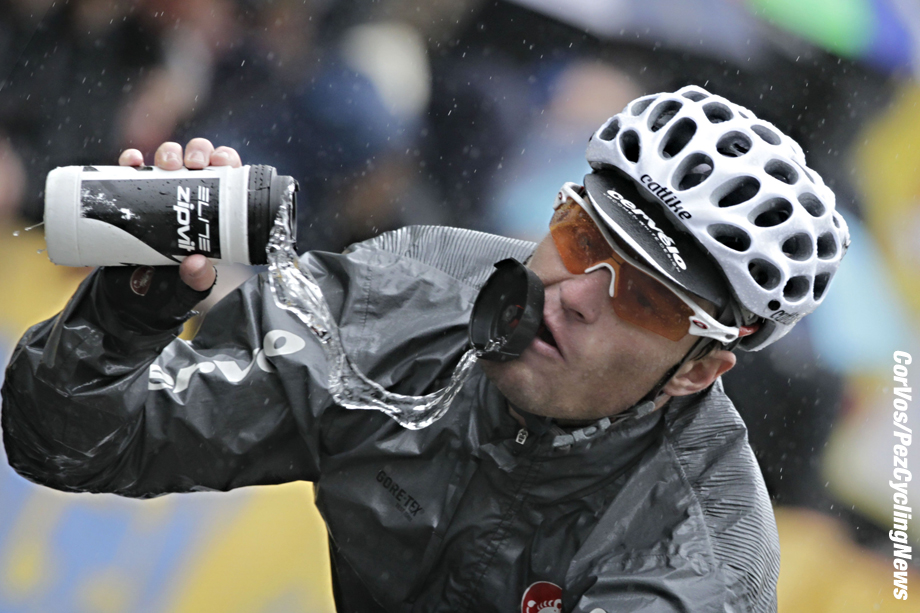 Dehydration, if sufficiently severe can cause (1):

The majority of your body’s heat loss will take place through the evaporation of sweat. Heat production may increase 15-20 times compared with at rest, even on relatively low-intensity rides.

The aim of hydration during riding should be to avoid gaining weight (i.e. don’t drink too much) but avoid losing too much. Though some weight loss is common, most riders will tolerate losing 2% of their body weight during a ride in cold to temperate conditions (between 5 - 22°C). To find out how your body responds, try weighing yourself before and after a ride noting how much fluid you consumed during the outing.

For example, if a rider weighed 70 kg at the start of a ride, but returned weighing less than 68.6 kg (2%), it’s likely that they did not drink enough.

In addition, a rider may monitor urine output to assess frequency, volume and colour, in order to conduct an individualised self-assessment of hydration status.

The amount of fluid that a rider should drink varies, so it’s difficult to make specific recommendations. However, the American College of Sports Medicine’s Position Stand (2007) is that riders should aim to consume between 400 – 800 mL hour. A rider may adjust this based on weight and urine observation experiments pre and post ride.

Small amounts of sodium (0.3 to 0.7 grams per litre) may be useful in some contexts (‘e.g. for salty sweaters’) and added to sports drinks, but the amounts of electrolytes a rider should consume also varies between individuals. Electrolyte powders and dissolvable tablets, containing sodium, are available from a number of manufacturers. Hydration advice should be specific to the task, the environment and the individual.

You Can Still Overheat In The Cold
Heat stress is strongly related to prolonged intense activities such as cycling. In addition to impairing performance, getting to hot also increases the risk of heat illness. Heat illness can occur even in relatively cool conditions. In their book ‘Cutting-Edge Cycling’ (2) Allen & Cheung cite the case of a male runner who collapsed following a marathon due to heat stress, despite the fact that the ambient temperature was ‘only’ 6°C.

Overheating can especially be a risk during indoor training, due to the lack of convective heat loss from the lack of movement and wind. It is definitely worth it to invest in a quality fan that can push a substantial amount of wind across your body, as studies have demonstrated that the lack of airflow in many research studies may distort and over-represent the benefits of different hydration and cooling strategies like pre-cooling (3).

In addition to overheating, you can still lose a substantial amount of fluid during winter rides, even if you don't feel like you're sweating much. First off, you're still sweating a fair amount but it's just evaporating quickly rather than sitting on your skin. Second, you're breathing in cold and dry air, humidifying it before it reaches your fragile lung tissue, then losing all that moisture when you exhale.

Why Getting Too Hot Can Slow You Down
There is a large body of work in the fields of medicine, sports science and exercise physiology looking at the impact of heat. For example, in 1997 Galloway and Maughan (4) explored the effects of ambient temperature on cycling performance, measuring a group of rider’s time to exhaustion at 4°C, 10°C, 20°C and 30°C whilst riding at 70% VO2 max (the upper boundary of training zone 2 in a 6 zone system). The subjects performed best at 10°C and progressively worse at 20°C and 30°C.

However, it’s not simply environmental conditions and their impact on chemical processes which limit performance. Our perception of the environment plays a huge role. 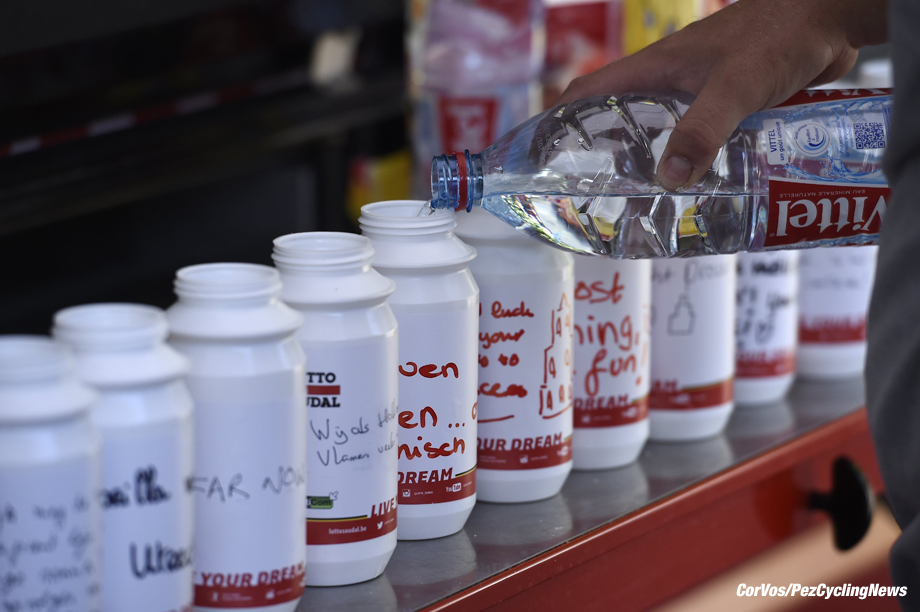 Is It All In The Mind?
In 2011, Castle et al. (5) conducted a study requiring subjects to carry out a 30 minute cycling time-trial in a range of temperature conditions. However, the researchers deceived the riders by providing incorrect feedback, tricking them into thinking that the room and their body temperature were lower than in reality.

The findings were compelling:

“Deception improved performance in the heat by creating a lower RPE, evidence of a subtle mismatch between the subconscious expectation and conscious perception of the task demands.”

Protect Yourself
Simply being fit provides protection against the negative effects of increasing core body temperature. It appears that individuals who possess greater levels of aerobic fitness are more resistant to heat, likely due to a number of adaptations which take place in relation to improving fitness which also enhance heat resistance. Examples include improved sweat response, lowering the threshold that sweating begins in addition to lower resting and a higher maximum tolerated core temperatures.

Top Tips To Regulate Your Body Temperature This Winter
1) Select appropriate clothing for the conditions.
2) Consider wind-chill and individual differences (body-mass).
3) Use a fan when training indoors.
4) Hydrate appropriately, even in cool conditions.
5) Use your mind to your advantage: If you can’t do anything about it, don’t dwell on thoughts of being ‘too hot’ and even try to convince yourself that it’s cooler than it is!
6) Keep training! - The fitter you are, the better it seems that you can acclimatize. 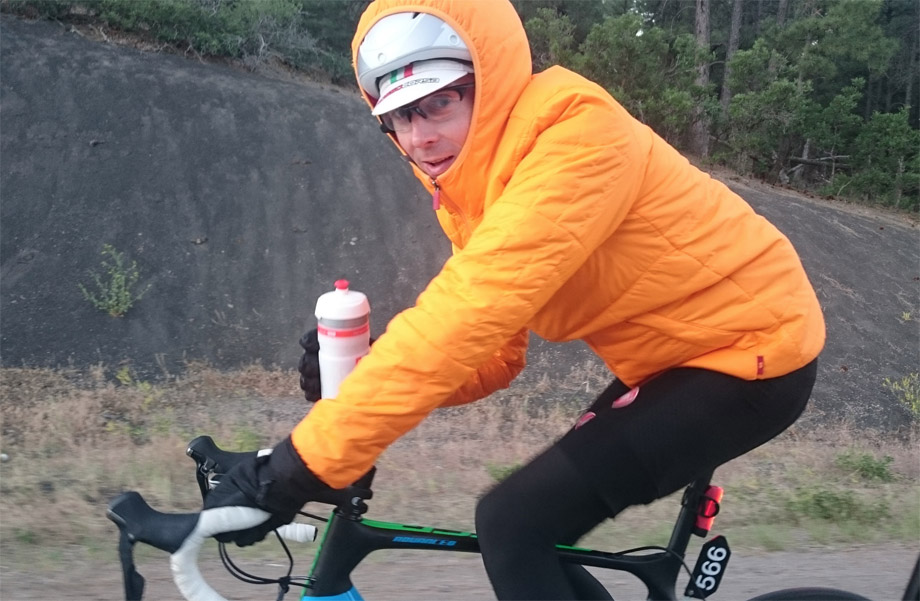 About James
James Hewitt is Sports Scientist and Performance Coach with HINTSA Performance based in Geneva, Switzerland. In a previous life he was an Elite racer but now focusses on avoiding caffeine overdose and helping other people achieve their goals. You can contact James through twitter @jamesphewitt and find out more at his website www.jameshewitt.net
▲ BACK TO TOP ▲
Related Stories
﻿