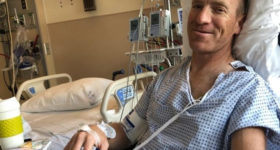 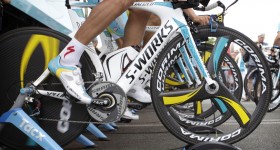 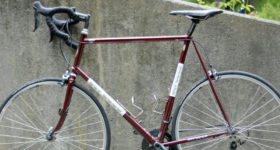 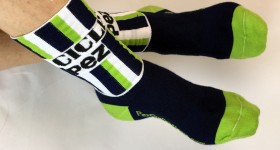 ToolBox
TAGS:
Best of PEZ Toolbox’14: The Power of a Bike Fit
by Stephen Cheung

There are many reasons to go for a bike fit, from an unusual body shape, fixing aches and pains, through to optimizing power output. Regardless of what technology is used or reason for going, a good bike fit by a fitter with a sharp eye and a collaborative approach can be one of the best investments you make in your cycling. Let’s explore with a data-driven case study.


The Ideal Non-Candidate for a Bike Fit?
I can count myself quite lucky. In nearly 30 years of riding and racing, I have never had any bike-related issue besides crashes that has kept me off the bike. So no knee injuries or tendonitis, painful back or neck, numb hands or arms. And all this despite a continuing rotation of bikes, shoes, and saddles over the years. I typically just throw a pair of cleats onto my new shoes, tweak it a couple of times at most, then forget about it.

Same with bikes and saddles. I generally have no problems adjusting to different saddles, and currently have saddles on my various bikes as wide-ranging in design as the flat and lengthy Fizik Arione, the Specialized Romin as a moderate all-around saddle design, through to the highly sculpted SMP with also a very long middle cut-out.

And my saddle position? It pretty much hasn’t changed since the time I started cycling in the mid-1980s. For those of that era, the ideal bike fit was to emulate the pros’ “high and back” saddle position. This was formalized in the equation of bottom bracket to saddle distance of 0.883 * inseam length (the fact that I can reel that equation off by heart after 30 years should show how deeply ingrained and popular that philosophy was!). 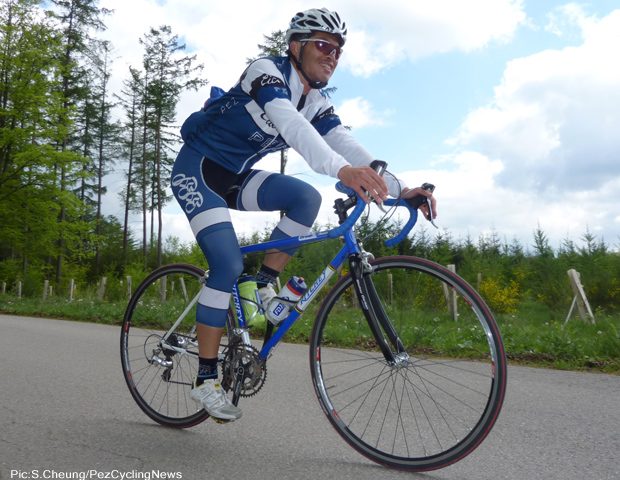 In the Ardennes with my classic 1980s position

My Path to the Bike Fitter
So despite being a scientist by training and by mindset, I have never felt the need to experiment with my position. There was no obvious reason to experiment because I wasn’t suffering any injuries, and I figured the idea of improved power output through position changes was a bit of snake oil promise. 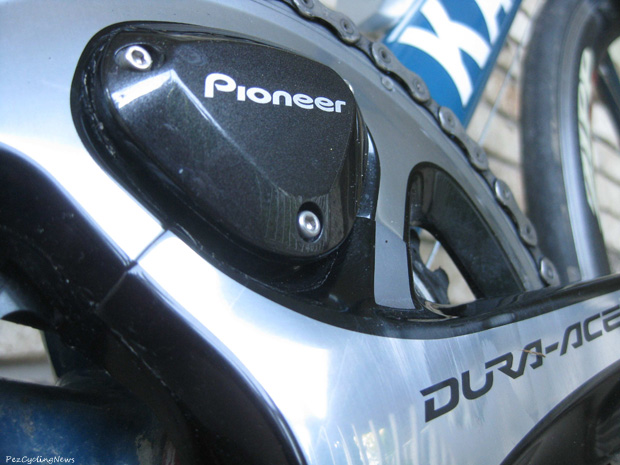 Then along came the Pioneer power meter, which provided the unique ability to see and analyze your pedal stroke in real time. Unlike other power meters that give you power as a single number, or left-right pedal balance by just overall power from each leg, the Pioneer provided force vectors of each 30° of each leg’s pedal stroke. So with each leg, I can see twelve arrows telling me the magnitude of force production at each point of the stroke, and also the direction of that force. Now HERE was something I could sink my teeth into scientifically!

Bike Fit #1
If you recall my Toolbox article from earlier this year, I outlined my first experiences with the Pioneer, finding that I had a large left/right power discrepancy of typically 55:45% regardless of cadence or power output. So I booked myself for a bike fit this past January at my local shop using the Specialized Body Geometry fit system, with Kyle Rempel a master fitter who is also a trained kinesiologist with a degree from my own department at Brock University. 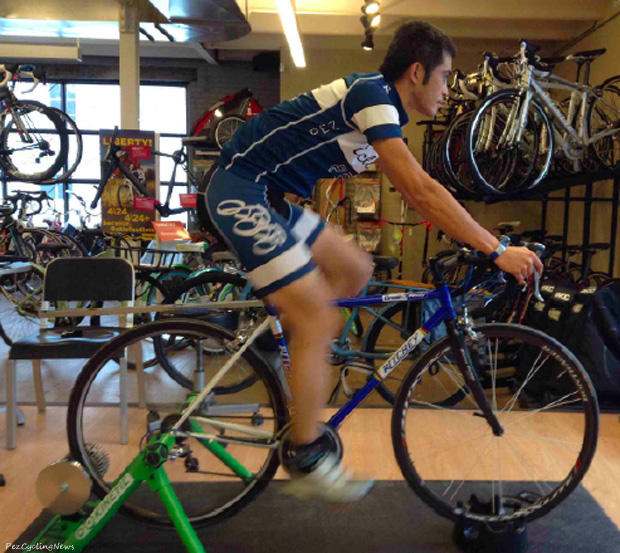 Now if there is one thing that is critical when approaching a bike fit, it’s that you should go into it with a clear set of goals. What you hope to get out of it determines the aims of the bike fit, be it addressing a particular injury or optimizing fit towards a style or discipline of riding (e.g., time trials, racing, recreational riding). My goal with this bike fit was to figure out what’s causing the pedaling power discrepancy, rather than any particular performance outcome or goal. 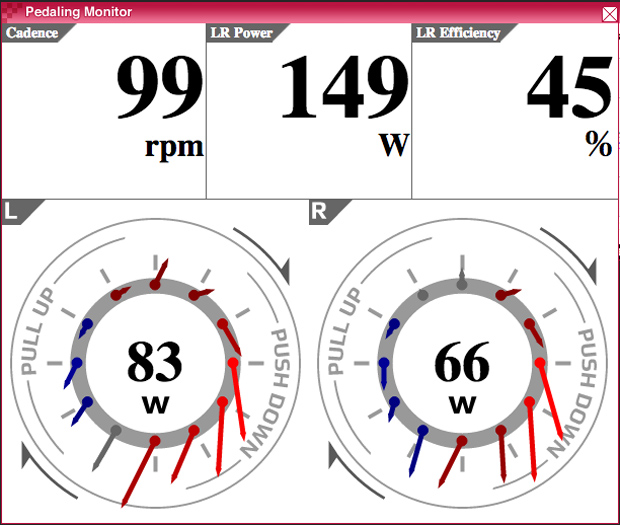 Here’s what my pedaling generally looked like before. Notice the big difference in power output between the left and right legs along with the pedaling stroke differences (red = positive, blue = negative force). Note also the fairly strong downward force on both legs and the dead spot at the top of the right leg.

The main assessment was that I had a functionally longer right femur, resulting in my right leg being cramped and not generating power. Upon reflection, this made sense, but I had never connected the dots until now. On my main bike (De Rosa Idol), I had an Arione where the left side sagged down heavily compared to the right. And while riding hard, I tended to twist my body hard to the left. Both of these observations pointed to me leaning over to the left to try to even out my leg lengths.

The changes involved switching to a Romin saddle to provide a more stable platform for my hips than the Arione I had been running. At the same time, we shimmed my left cleat and also moved the cleat forward, functionally lengthening my left leg. Finally, we raised my saddle height by 5 mm to extend both legs.

How did these changes work out? Here’s a representative screenshot of how my pedaling looked like after this first bike fit. This was taken during a series of 3 min seated climbing efforts up a 8-10% grade. 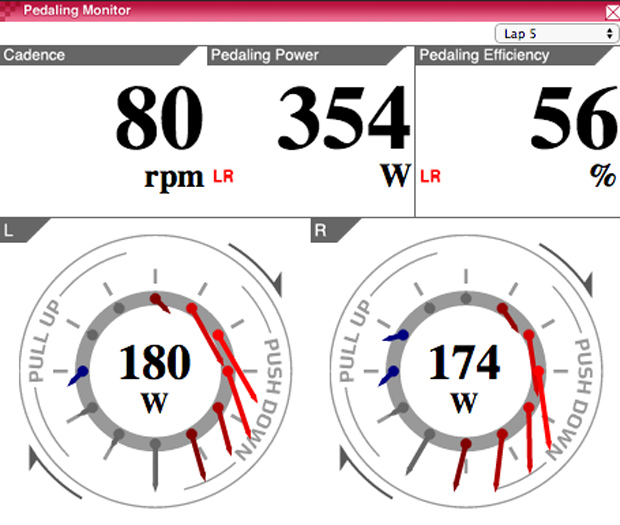 The power distribution is much more even but the pedaling dynamics remained fairly heavily biased towards the downstroke, with less negative force on the upstroke.

The new position certainly had the nice effect of evening out my pedaling stroke and power distribution. Out on the road, the biggest thing I noticed was that I was far more stable and balanced on the bike, in that I was no longer twisting to the left even when riding hard.

I went on to ride the next six months and about 5,000 km with this position set up on all of my bikes, riding both indoors and outdoors. This included my month of cycling in the windy Netherlands along with a big trip around and up Mont Ventoux with my Dutch pals. Throughout it all, I had no issues with the change in position and my fitness improved along its usual season-long trajectory.

New Bike = New Bike Fit
My second bike fit this year came about in early July when I had the opportunity to test the new Aquila Equipe-R from the Toronto-area shop Racer Sportif (review coming!). Since this was a completely new bike, owner and Retul-certified fitter Frank Mizerski and I decided to do a thorough bike fit to optimally spec the bike for me. I decided to not divulge any details of my prior bike fit history to Frank to see how two different bike fits might compare in their diagnoses and recommendations. I also used another pair of shoes (Mavic Huez) that had a neutral cleat setup. 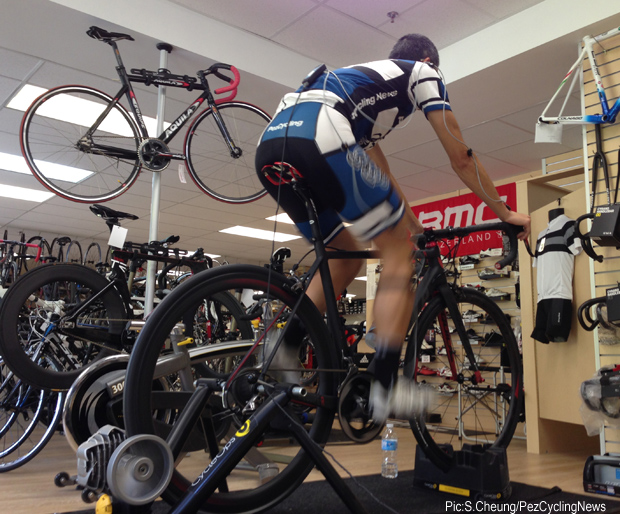 The week before, my buddy Rob and I did a hard climbing repeats workout, with 10 x 3 min repeats up an 8-10% grade riding my Kane with the 2014-era Pioneer power meter. My average power for the repeats was in the 310-315 W range, with the highest single effort averaging 323 W (see pedaling profile in previous pic).

Using the Retul, which uses infrared sensors at multiple joint segments on each side of the body, the unique data that is provided are the actual joint angles and knee tracking during actual pedaling, rather than only during static holding of a position or snapshots with a camera. What I found interesting was that Frank almost immediately diagnosed the “high and back” saddle position based on the joint angles. We then proceeded to talk through my riding and racing history in more detail. Specifically, some of the things we talked about:

• I’ve always been a low-cadence rider. My preferred cadence is generally 90-92 rpm, and it’s a bit of a stretch for me to maintain a cadence >95 rpm.

• My biggest racing weakness is the inability to rapidly accelerate, hit the high wattages, and close a gap or chase down an attack.

To address these issues, we decided to drastically change my orientation to the bottom bracket and cranks. Specifically, we moved the saddle down 10 mm (i.e., down 5 mm from what I had before my first fit), and about 30 mm forward. To keep my already fairly aggressive and low position, we further dropped the handlebars by 10 mm. The end result is that I was much more over the bottom bracket and my legs weren’t nearly as extended as before.

How did this work out? I set up my Kane/Pioneer combo with the same saddle position and did the exact same 10 x 3 min repeat workout two days afterwards (one week in between the two workouts). Here’s a representative screenshot: 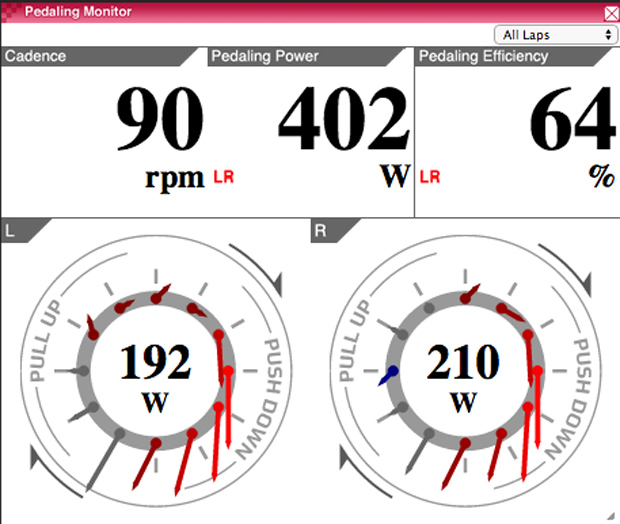 • My quads were usually what really burns with hard efforts. With the new position, I felt much less stress on my quads, as I was using more of my hips, hamstrings, and glute muscles.

• My pedaling was much more even over the entire stroke. You can see that I’m pulling back effectively now (6 and 7 o’clock positions) and also starting to generate positive force consistently at the 11 o’clock position). This wasn’t restricted to climbing or high efforts, but has been consistent in most riding situations.

• My preferred cadence is now much higher. Rather than struggling to maintain 95 rpm, I now easily spin 100-105 rpm without even realizing it.

• Besides the power difference, the biggest thing I’ve noticed on the road is on false flats or small rollers. Whereas before I would either stand up or shift down, I now notice that I can just keep the same gear, stay seated, and roll over them.

• Moving my centre of gravity forward has resulted in a change in bike handling, to the Aquila and all my other bikes feeling much more lively. There’s now zero lag time between steering and response.

Lessons Learned
Two different bike fits, two different recommendations. What have I learned from the process?

First, each bike fit had different goals going in, and this played a huge role in what we focused on and what we ended up with. So before you go for a fit, be clear on what your approach or goal is, and communicate it clearly with your fitter in a collaborative exchange.

Second, context and history is important. Each bike fit made sense based on things that I have noted in my own riding history. So a bike fit is NOT a one-way street, but relies on your experience to mesh with ideas that the fitter may propose.

Third is that an increase in power IS possible (but not guaranteed) with changes in bike position.

Fourth, there is no single best fit system. Tools are just tools but a knowledgeable fitter is still the primary requirement.

And the last one should be obvious. Despite my lack of injuries, a bike fit was still a great and worthwhile investment for long-term health or performance.

Thanks to Kyle Rempel at Liberty! Bicycles and Frank Mizerski at Racer Sportif for their help. Full disclosure that I received the bike fits for free, but I believed in the process enough to pay for my wife to get her own bike fit.

Stephen Cheung is a Canada Research Chair at Brock University, and has published over 80 scientific articles and book chapters dealing with the effects of thermal and hypoxic stress on human physiology and performance. Stephen’s Cutting-Edge Cycling, a book on the science of cycling, came out April 2012, and he can be reached for comments at [email protected] .
▲ BACK TO TOP ▲
Related Stories
﻿