Toolbox: Ask a coach about “winning” and he might cite threshold power, great tactical acumen, or the importance of a strong team; each an important element without question, but what else goes into the equation? In the end it often comes down to mental focus and the ability to sort out the irrelevant. 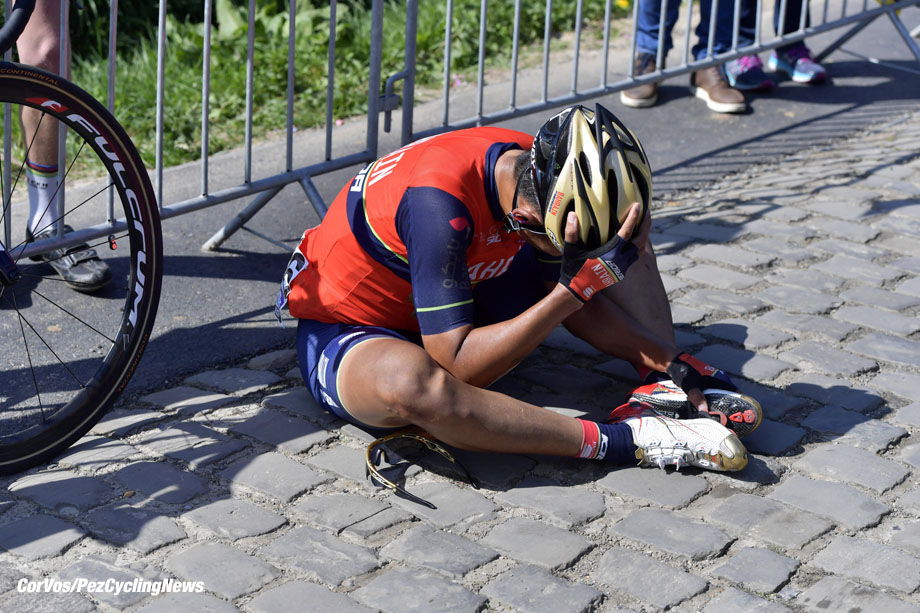 Listen to PEZ editor Dr. Stephen Cheung talking all about fitness/fatigue and its role here:


Read 'Is Your Brain Slowing You Down with Dr. Stephen Cheung' by Sonya Looney HERE.

What is Talent?
Talent is a nebulous concept. We all know of riders who seem supremely strong physically, but never make it beyond the club ride scene. At the same time, we all likely know of physically non-descript riders who are pretty much impossible to drop and who seemingly rise through the ranks on sheer willpower alone. What is it that helps the cream rise? Must we look above the legs and lungs to see if the mental side of the equation could be a major contributor to endurance sporting success?

To begin to answer questions like these Martin, Staiano, Menaspa, et al wanted to look at the role of grey matter in performance so they set out to compare resistance to mental fatigue and inhibitory control characteristics between amateur and professional cyclists.

Inhibitory control is as nuanced as it sounds. Essentially it is an individual’s ability to override their dominant, natural, or habitual behavioral response in order to implement a more adaptive goal-oriented behavior. Put another way, how well does an athlete manage the aversive feelings of muscle pain, thermal stress, the urge to quit and other generally negative thoughts and feelings against the larger goal of winning or putting forth a great performance?

Mental fatigue is perhaps easier to grasp for it is, as the authors noted, the “negative effects of prolonged mental exertion on mood and/or performance during cognitive tasks requiring vigilance and effortful cognitive processes.” Of particular note is recent work by the authors and others that deduced mental fatigue is also “associated with higher perception of effort and reduced performance during physical endurance tasks.”

The 30 minute Stroop Colour-Word task asks participants to categorize a series of words in different colors. The job is to hit the button that correlates with the INK color presented, not with the word color offered. For example the word blue in yellow would correctly be answered by pushing the yellow button. To further challenge participants if the ink was in the color red, they were to press the word color, not the ink color. For example if the word blue appeared in red ink, participants were to push the blue button! Wow, talk about mentally fatiguing! By comparison the less demanding group had to simply observe a black cross on a white background for 10 minutes.

A variety of measures were tracked in an effort to assert some conclusions. A maximal power test was administered on the first visit to establish baseline power numbers for the athletes. Physiological and perceptual measures included blood lactate concentrations, heart rate (HR), and rating of perceived exertion (RPE), using the Borg 6-20 point scale of effort.

On the Psychological measures side the NASA Task Load Index (NASA-TLX) was used to assess subjective workload of the cognitive tasks. The NASA-TLX is composed of six subscales, four of which were used here: mental demand (how much mental and perceptual activity was required?), temporal demand (how much time pressure did you feel due to the rate or pace at which the task occurred?), effort (how hard did you have to work to accomplish your level of performance?) and frustration (how irritating or annoying did you perceive the task?)” Each item was scored on a 20 point scale, which was the multiplied by five to get a final score between 0 – 100 on each subscale.

To assess changes in mood from the beginning to the end of visits 3 and 4, the Four Dimensional Mood Scale (4DMS) was used. The 4DMS measures positive energy, tiredness, negative arousal, and relaxation using 20 adjectives rated on a five point Likert scale to describe their current mood state ranging from 0=Not at all to 4=extremely. 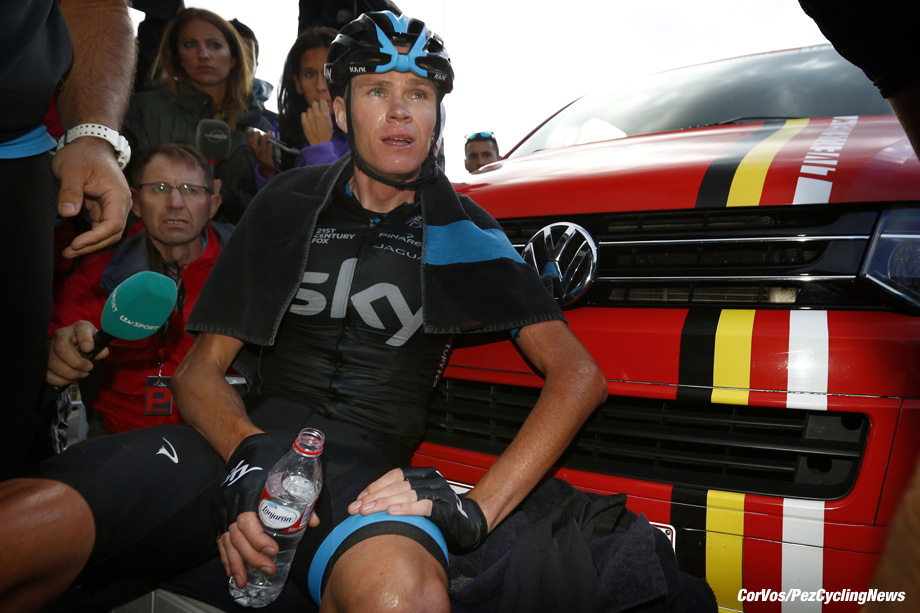 Results
As you might expect based on the description above, the Stroop task was rated as being much more mentally demanding (77 vs 24), temporally demanding (63 vs 12) and more frustrating (56 vs 19) than the “black cross on a white background” control condition. While both groups rated the Stroop test as more effortful than the control. In concert with that 4DMS analysis showed a decrease in positive energy, relaxation and tiredness all decreased from visit 3 to 4, while motivation showed no decrease. 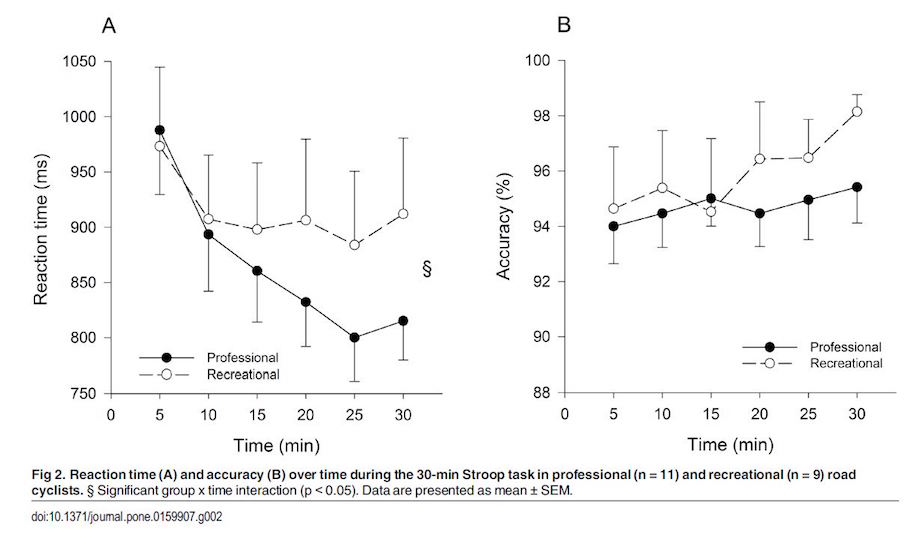 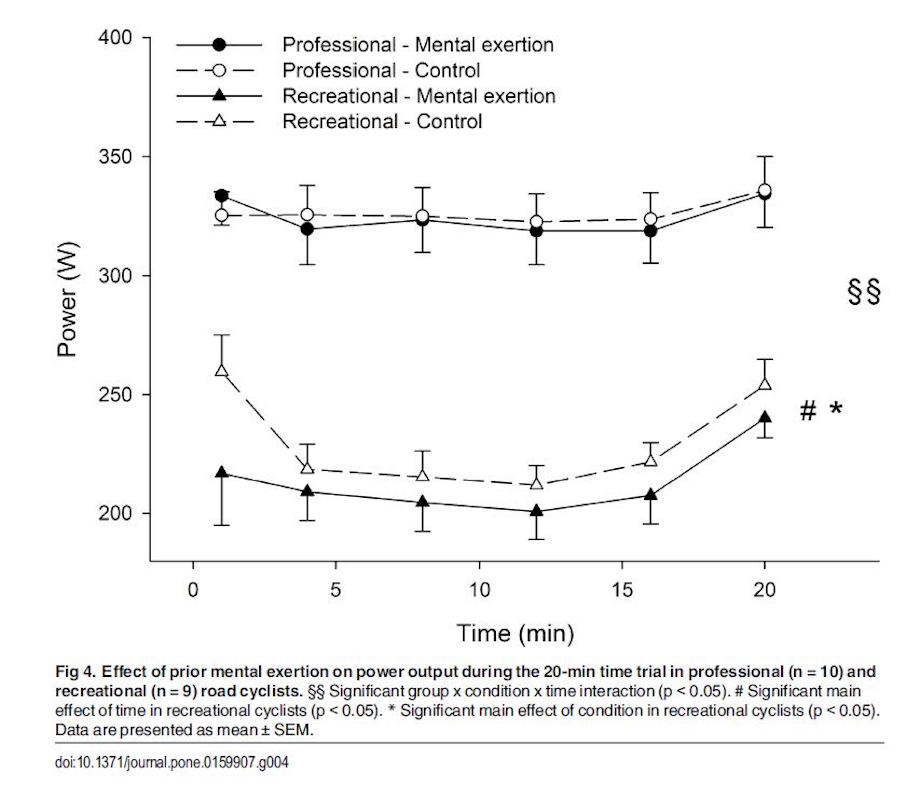 Interestingly RPE and HR were both higher across trials in the professionals than in the amateurs, although both reached similar maximal values at the end of each test.

Take Aways
In the end the two groups of athletes performed roughly how one might expect them to on the physiological measures. The professionals rode faster, at higher power, and at higher heart rates than the amateurs. The two conditions on offer, mental exertion and the control, showed a significantly better performance by the professionals when it came to minimizing the effects of the prolonged mental exertion during the time trial. In addition the professionals continued to improve their performance at the Stroop Word Colour test throughout the test, while the amateurs only showed significant improvement during the first 10 minutes. The researchers theorized that this could be due to superior inhibitory control of the professionals. They further theorized that said improved inhibitory control of endurance athletes makes them more likely to persist through the rigors of training, dietary and social restrictions, and also better able to exert this control during competition. The question then becomes where does inhibitory control come from? The researchers noted that previous work had suggested that superior inhibitory control was genetic and stable, so perhaps talent identification and early success were drivers of keeping those with superior inhibitory control involved in endurance sports. In addition aerobic training has been shown to improve neural efficiency and an increase in anterior cingulated cortex, an area of the brain associated with improved Stroop performance.

Summary
Performance is all too often described in physiological terms like power, heart rate and VO2max. Much research has focused on these elements, while the role of the brain is less well known. Professionals performed better at both the time trial and the Stroop test, demonstrating what the researchers attributed as superior inhibitory control and mental focus. These are the abilities to block out irrelevant stimuli like discomfort and distraction to focus on the task at hand. Perhaps these factors as much, or more, than purely physical ones can account for the difference between two equally “talented” riders.


About Matt McNamara: Matt is a USA Cycling Level 1 coach with over 20 years of racing, coaching and team management experience. This fall he once again jumped into the ‘cross game in anticipation of a massive El Nino in Northern California and the arrival of much needed (and anticipated) rain! Matt is the founder and president of Sterling Sports Group. Learn more by visiting him online at www.sterlingwins.com.