Writers'Rigs: We have all seen Chuck Peña's fine Felt FC bike in his wheel, chainring and saddle reviews in the past, but we've not heard too much about the steed its self. Not to miss a chance to show off his bike and describe the ins and outs of its existence... Chuck's Writers' Rig in detail. 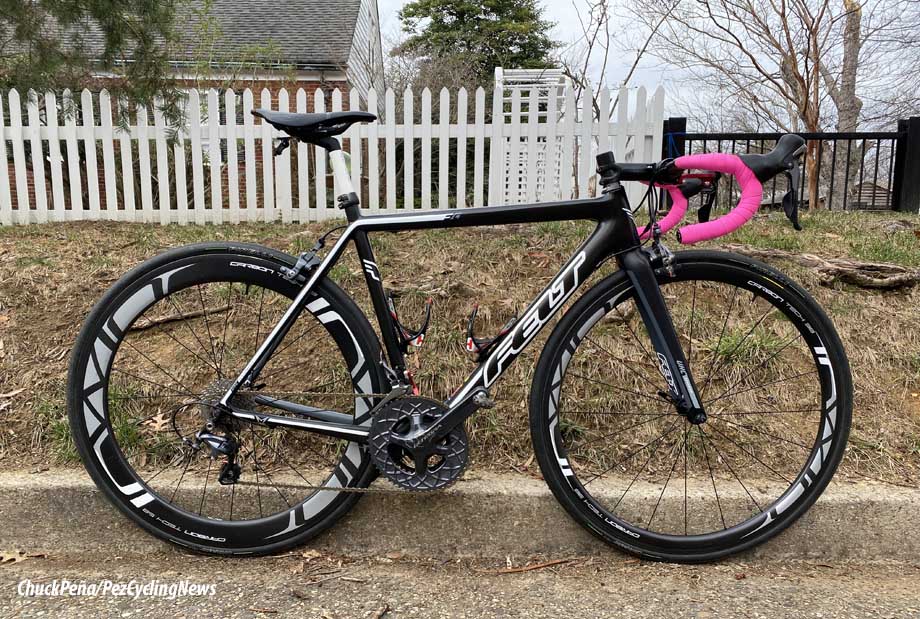 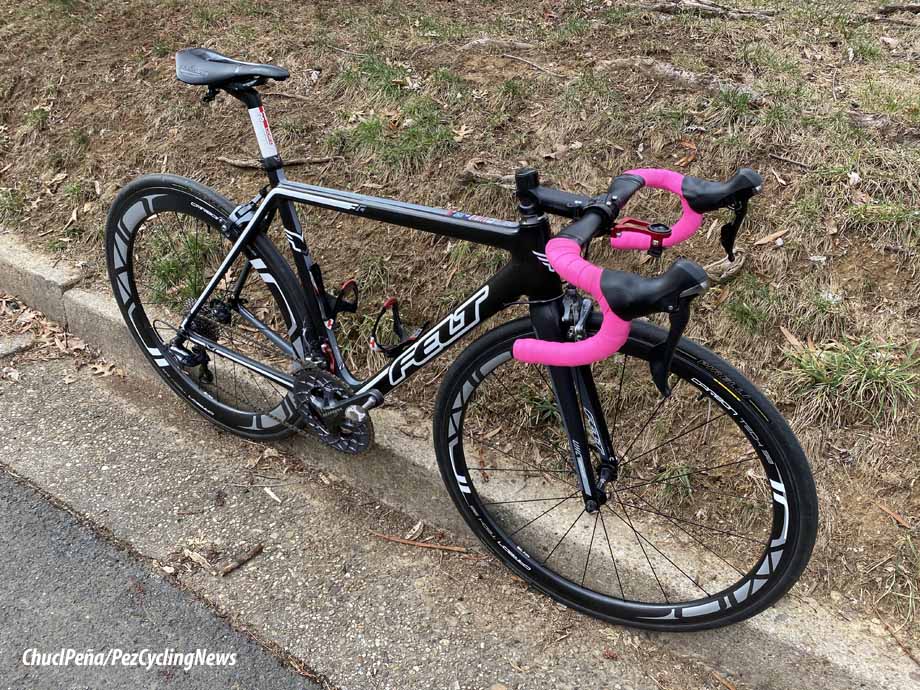 When did you buy it?
My wife bought me the frame as a 55th birthday present toward the end 2014 (my birthday is in June, but it took me a while to decide on parts and build so my first ride on it was in November). I had been back to riding a year after a 15 year hiatus and as much as I love my #steelisreal Hollands that was my race bike in the 90s (I still ride it), I wanted a modern carbon fiber bike. 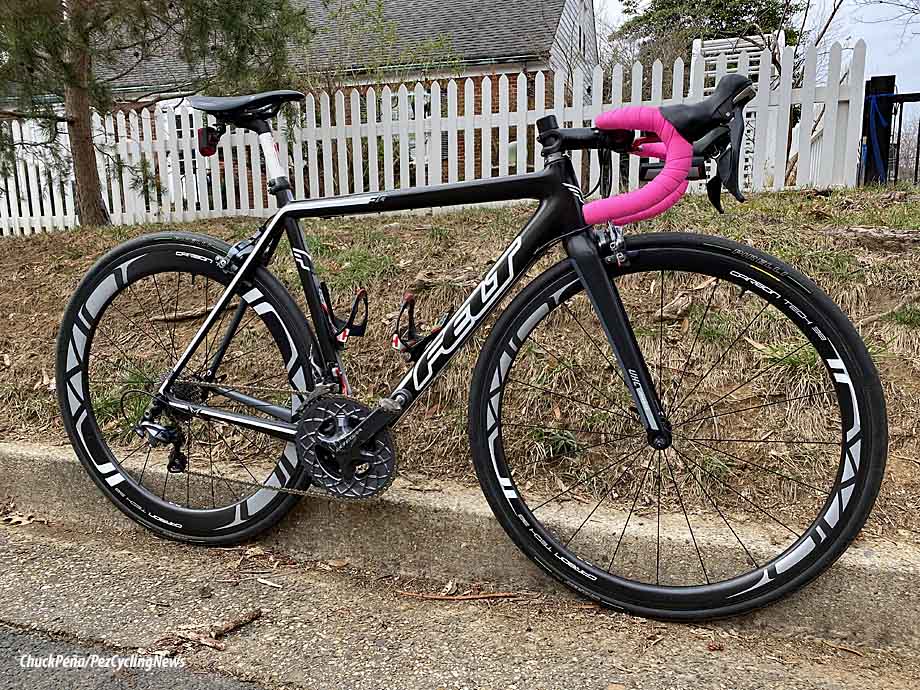 What made you choose this bike?
My wife was in the bike industry at the time and she was able to get an employee deal (Felt knew it was a gift and was OK with that) so that was part of the equation. But a bigger part of the equation was that the geometry (including stack and reach) were pretty much spot on identical to my Hollands (which is a custom frame because for my height I have a somewhat longer torso and reach so need a longer top tube). But that meant sizing "up" from Felt's recommended frame size to a frame size that would be too big (standover height) if the frame had a horizontal top tube but fits me just fine with a slightly sloping top tube. So it looks a little more "traditional" in that I don't have a ton of seat post showing or have to run an ungodly long stem (although at 11 cm, my stem isn't all that short either and looks longer because it's -17 degrees) compared to a lot of modern pro bikes. And Felt had been ridden by the likes of Marcel Kittel and the Argos-Shimano team to stage wins and the yellow jersey in the TdF, so I knew their product was up to snuff. 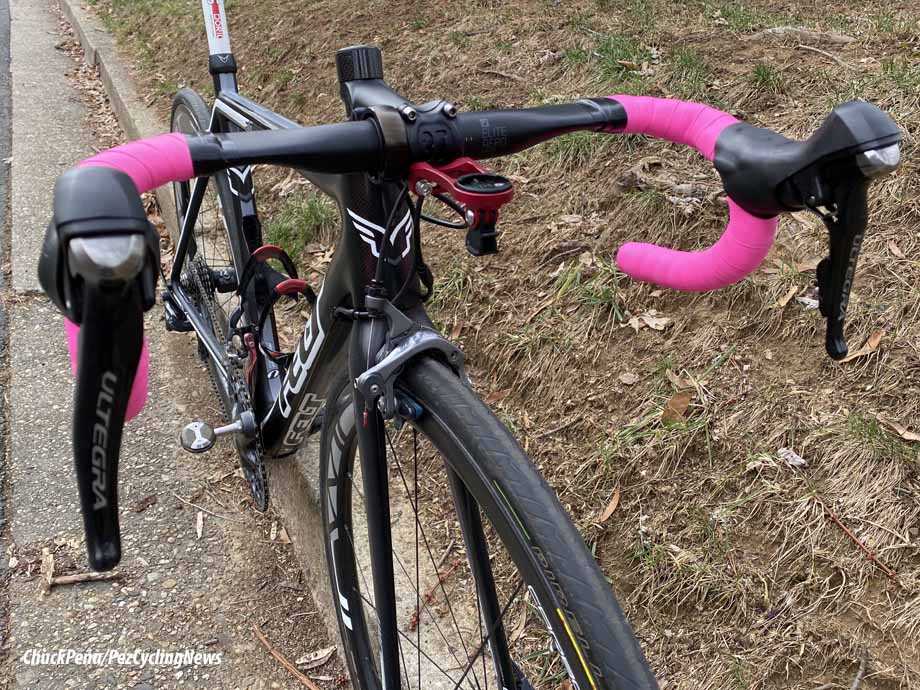 Have you done any modifications/additions to it?
I built the bike from a bare frame so I guess you could say everything is a modification! I thought about Dura Ace (because that's what I used to ride when I raced) but decided to go with Ultegra because it was just the more cost-effective thing to do. Whatever performance gain I would get from Dura Ace just wouldn't really matter because I'm not that good. I originally went with an "oddball" 50/36 chain ring combo (with 11-28 cassette) because I wanted to be able to stay in the small ring longer on the flats. And then I made the switch to Absolute Black oval chain rings. But after doing the likes of Flèche Buffoon, my aging legs decided I should probably be riding 50/34 (so I got an Absolute Black 34T small chain ring) and I changed my cassette to 11-30. After several years of riding on Shimano chains, my friend Chris in the UK convinced me to try a KMC chain (I'm told they make chains for Shimano). I like the idea of a quick link plus love the Mr. T gold bling. I rode the original FSA BB30 bottom bracket with spacers for the crankarms for a year, but then switched to a Wheels Manufacturing outboard bottom bracket (at the urging of my friend, Chris, who is a fellow Felt rider) to ward off the inevitable creaking and other sounds that seem endemic with press fit bottom brackets. My original saddle was a Fizik Kurve Bull that I absolutely loved, but it needed replacing and isn't made anymore so I'm now riding a Selle San Marco Shortfit Carbon FX. My original handlebars were 3T Ergonova (alloy) but I recently swapped them out for Bontrager Elite Aero (also alloy) -- not for any performance gain but just because I like the look of aero road handlebars. And my original wheels were Shimano RS81 C35s that had an alloy brake track with a carbon fairing (at the time, I thought the best of both worlds), but I've since gone full carbon and am actually an ambassador for Irwin Wheels. 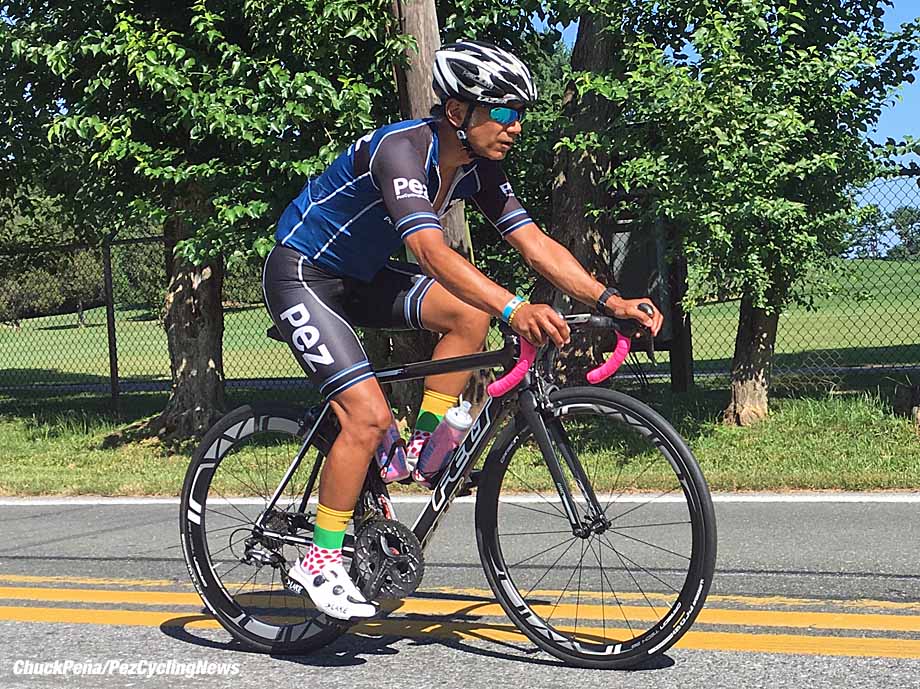 Slicing through the wind on mixed depth wheels 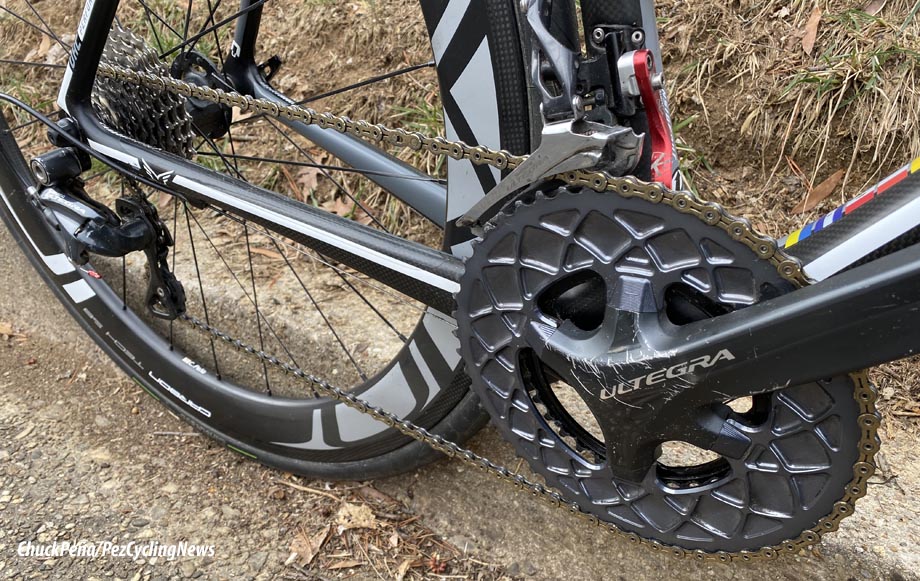 Pardon the battle scars on my crank arm, but just call me Mr. T 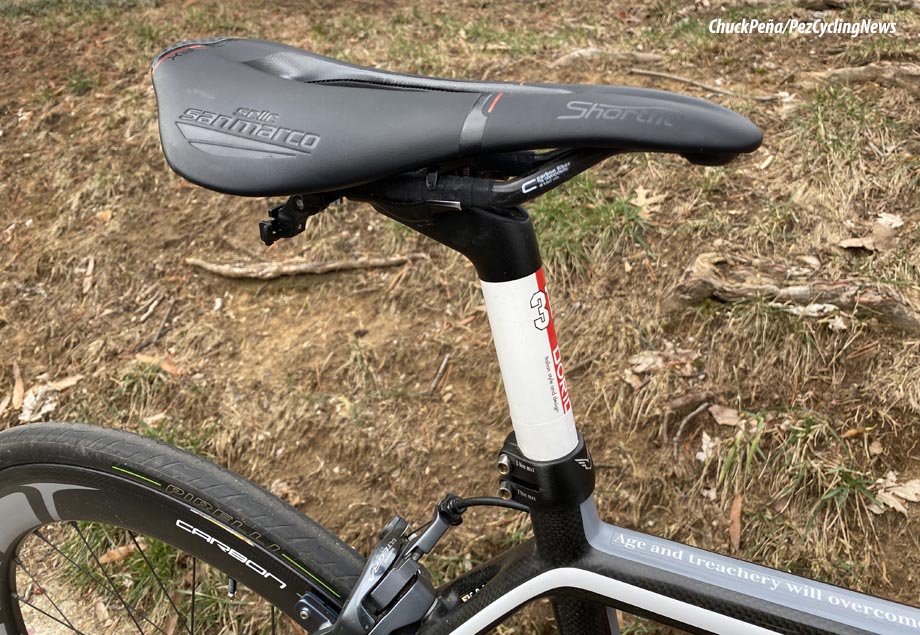 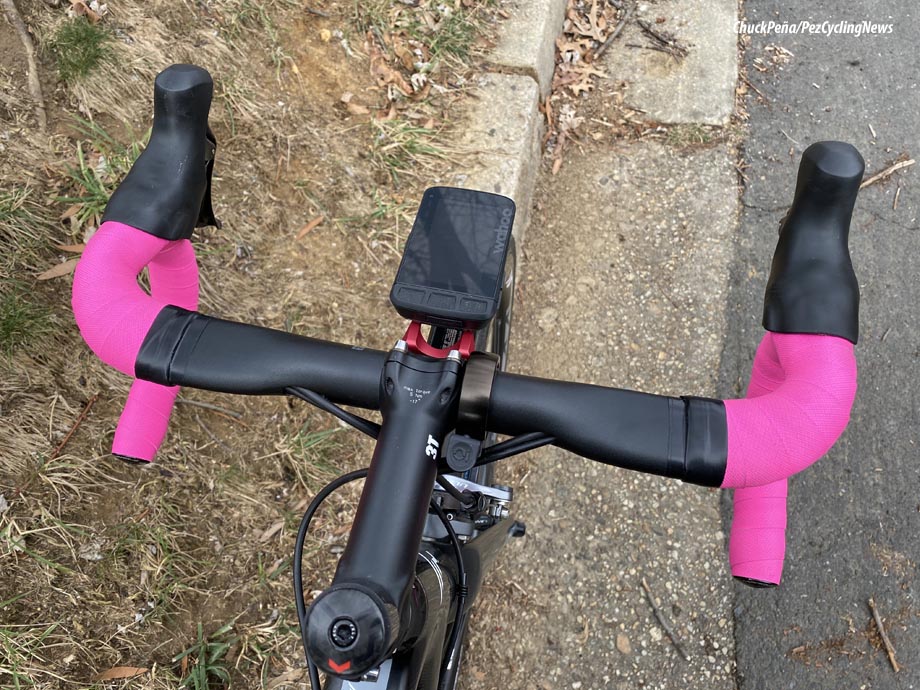 How many miles/kilometers do you do a year?
For the last several years, I've managed to ride more than 5,000 miles (but not quite 6,000). With work and family, I figure that's all I'm worth. 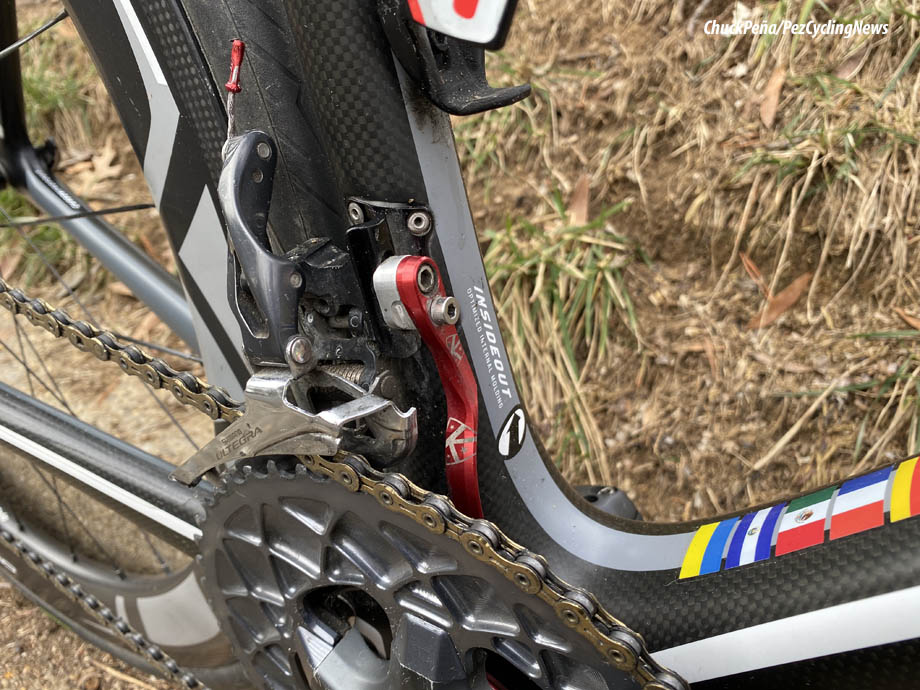 K-Edge Pro chain catcher is not infallible ... I've dropped my chain to the inside on a couple of occasions 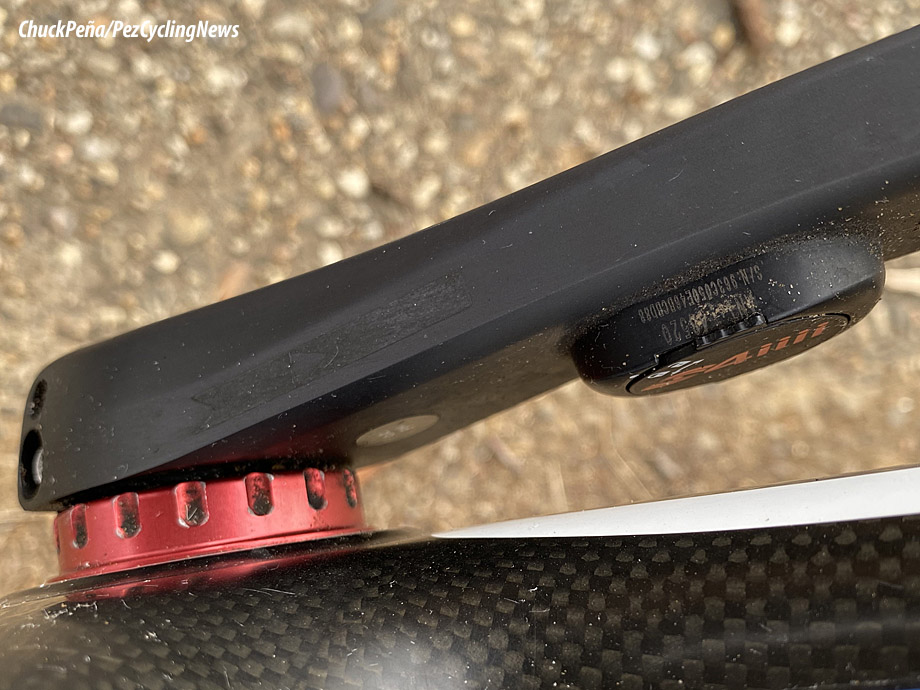 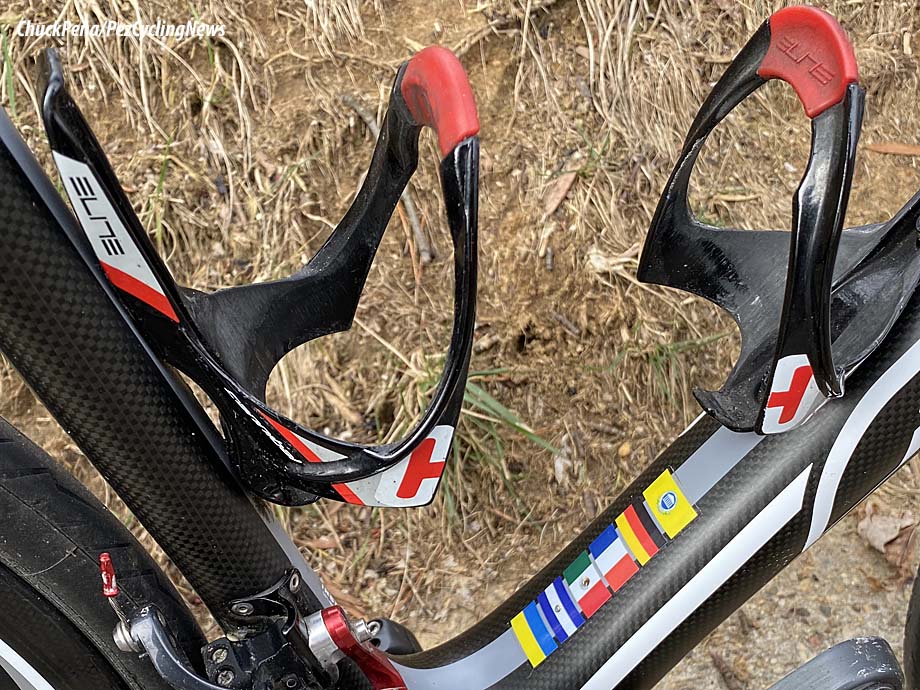 What do you love about this bike?
I'm sure every PEZ reader loves their bike because it's THEIR bike, which is how it should be. That's how I feel about my Felt FC. In particular, I love that it's built exactly to my spec since I did the build myself from a bare frame (when something isn't right with the bike, I just blame my mechanic!) And I love that it fits me perfectly (I think fit is something that too many riders overlook) -- combined with tubeless tires, it makes for an all-day comfortable ride (but still plenty stiff!) It's not a particularly "flashy" bike (except for maybe my choice of neon pink handlebar tape), but still sort of stands out from the crowd because Felt isn't as popular a brand (at least with roadies -- they are big in the triathlon world) as say Trek, Specialized, Cannondale, and Giant -- so it manages to get some looks and people ask about it when I do group rides. I also love the look of a -17 degree horizontal stem that's slammed on top of the headset cone spacer. IMHO it just looks "right." Thankfully -- despite my advanced years -- I can still ride a relatively long and low position, but even some of the younger guys wince just looking at it. 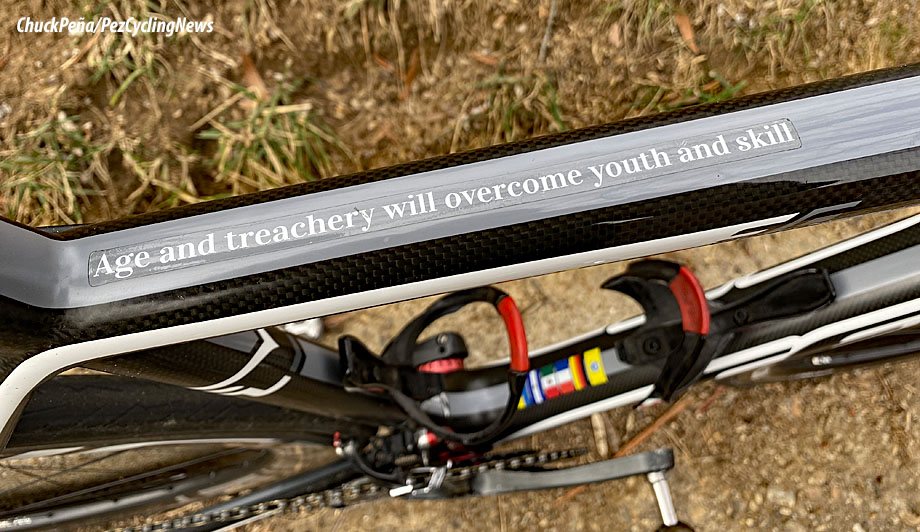 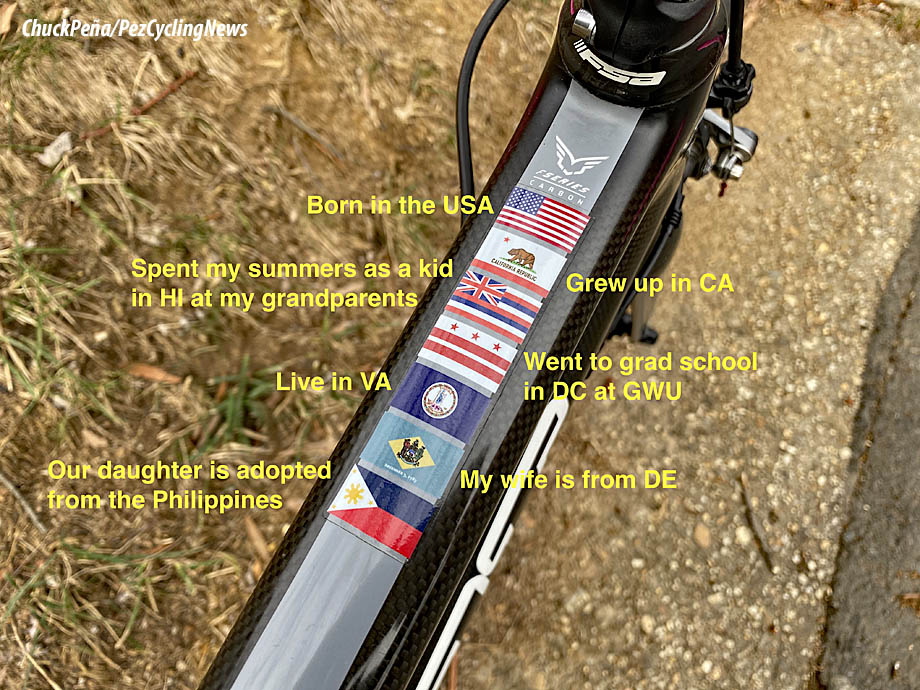 The flags on my top tube tell a story 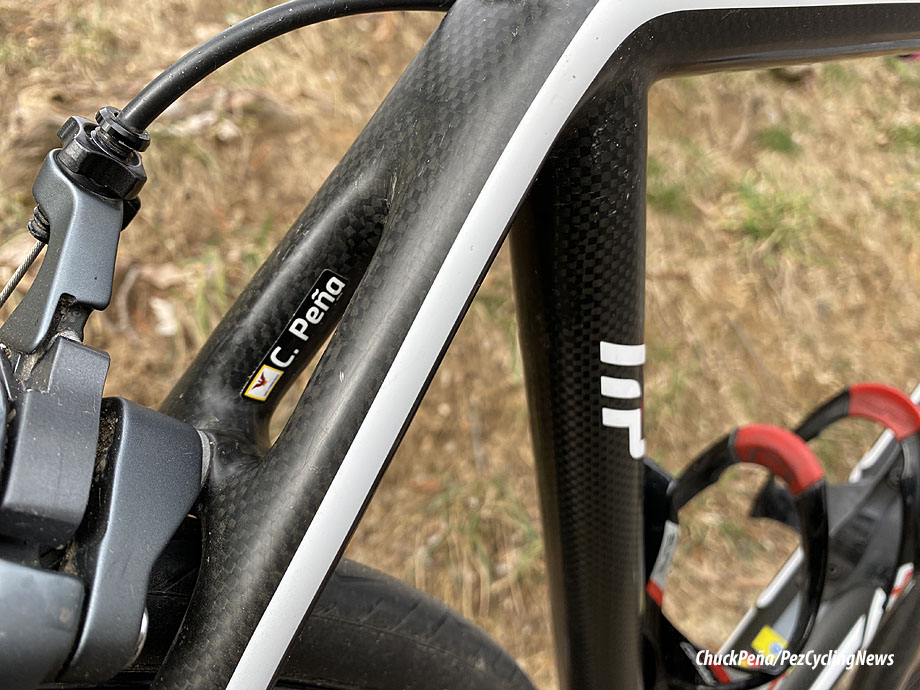 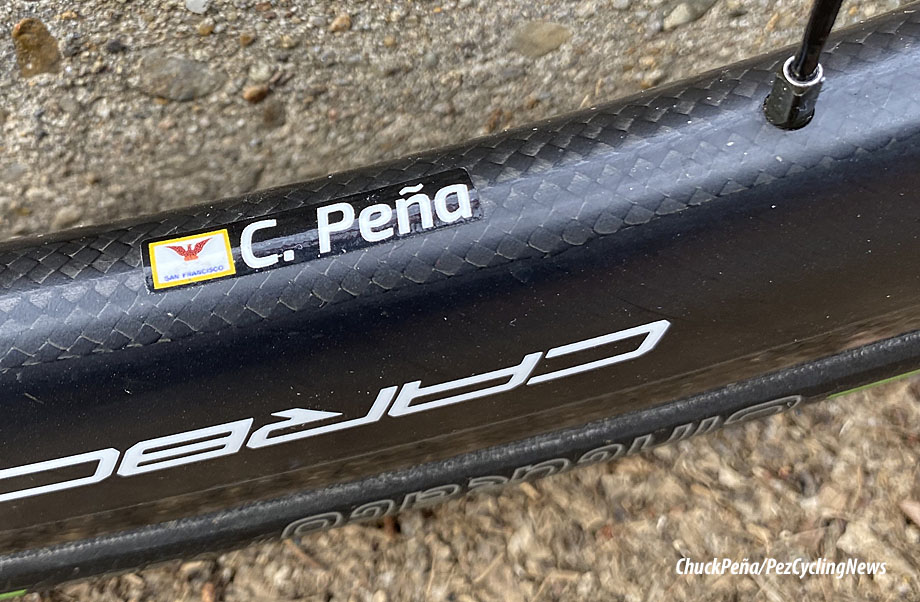 Favorite riding area?
Because of time constraints, I do almost all of my riding right from my front door so a lot of it is more urban-ish. Even though I live in a more metropolitan-like environment, you'd be surprised at how much good riding there is. I do a lot of riding in the northern Virginia area (Arlington, Alexandria, Falls Church, McLean, and Great Falls), but also love to do city riding in DC. And it's always fun to venture across the river into Maryland and ride out to Potomac, Poolesville, and Sugarloaf Mountain. I try to make time for a few rides a year where I put the bike on the car rack and drive somewhere further out. I did a fun ride out in the Leesburg area last year that included some extended unpaved sections (including a climb). And two longtime favorites are the Blue Ridger and Skyline Drive. 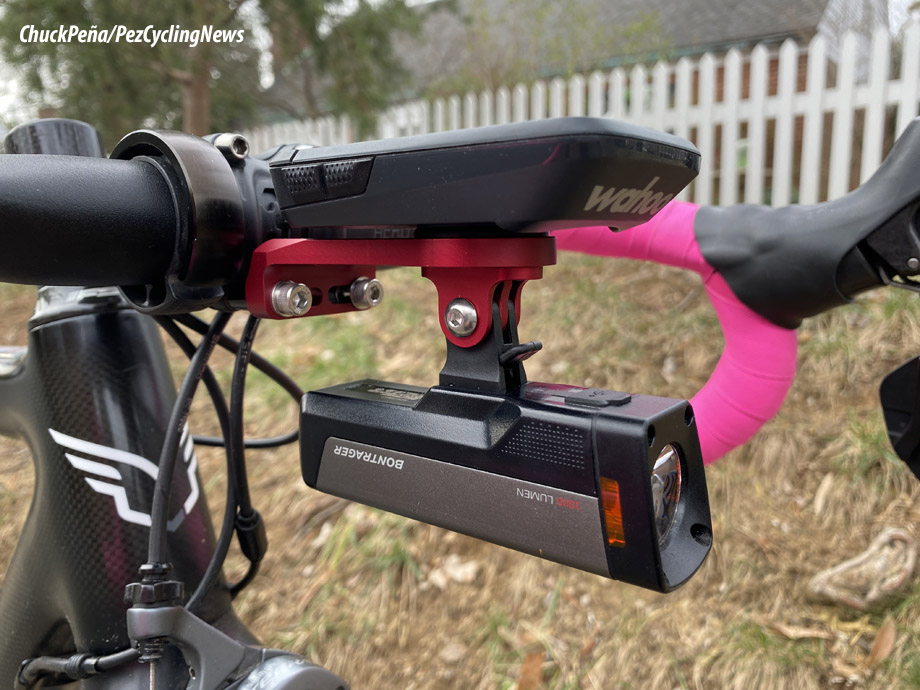 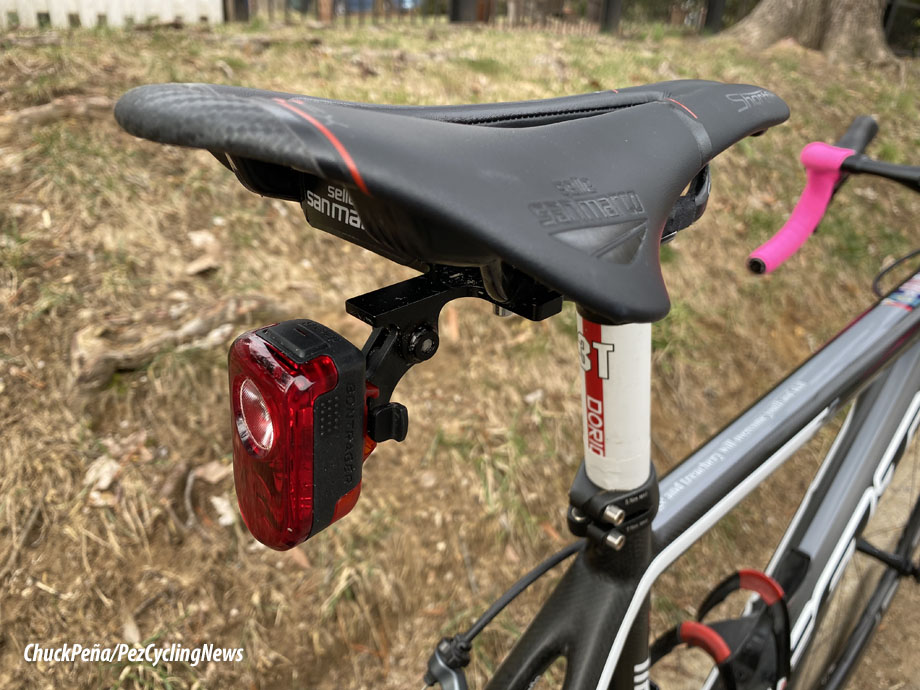 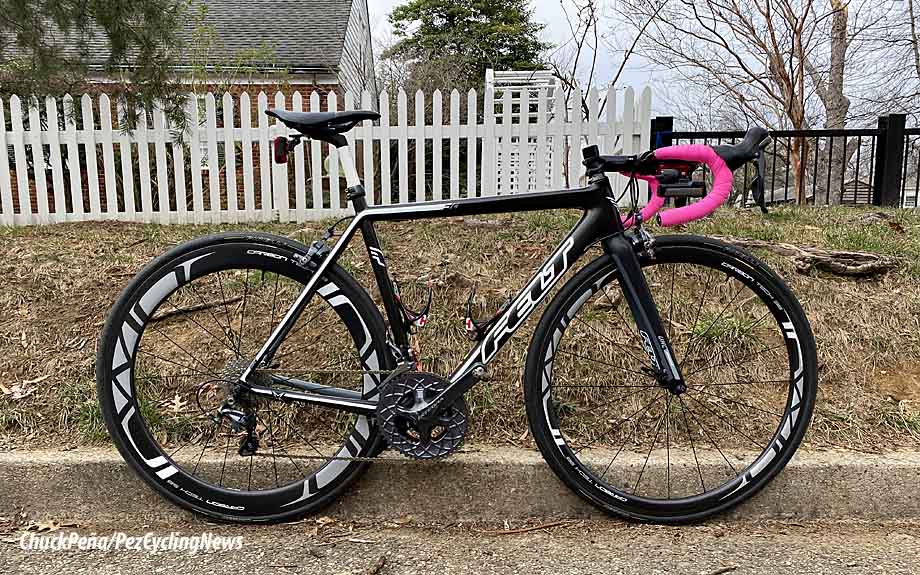 My front and rear light set up ... Made in China no-name brand + Bontrager Blendr 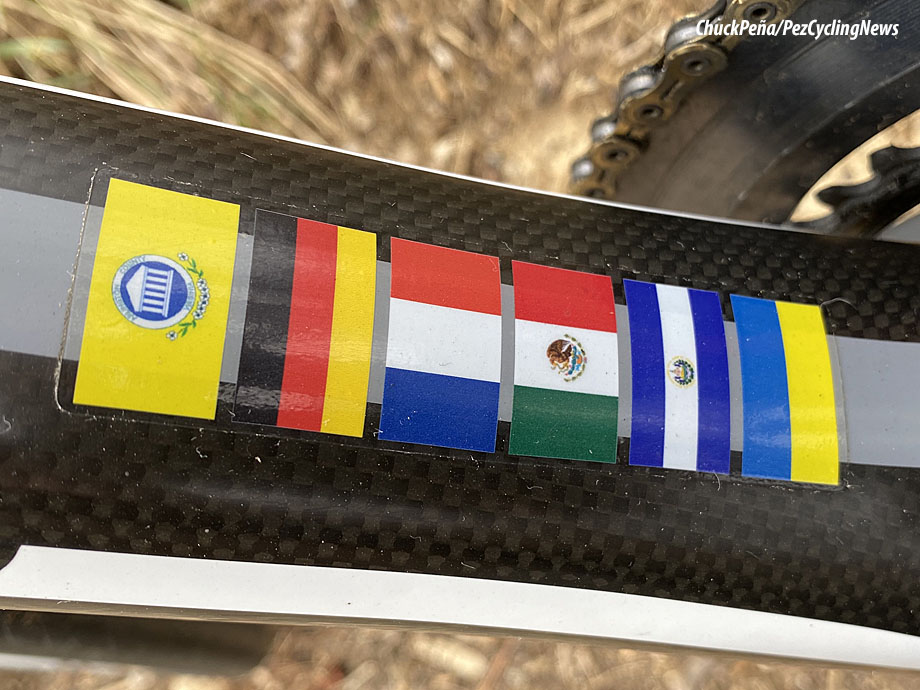 Favorite riding experience on your bike?
I have two. The first was the aforementioned Flèche Buffoon that I rode in April 2018 with my friends Bob Goulder aka The Real Bobke and Jeff Trinkle. Probably the single hardest day of riding I've done (including doing team RAAM in 1992). It really is a half Liege-Bastogne-Liege. 70 some-odd miles and nearly 6,000 feet of climbing parsed out over 14 Ardennes-like climbs -- all of which have double-digit grade. The worst is the Uhlerstown climb that averages 11 percent (according to Strava), which is actually a deceiving stat because some parts approach 30 percent! Definitely gives you greater appreciation and respect for the pros (especially in the Vuelta). 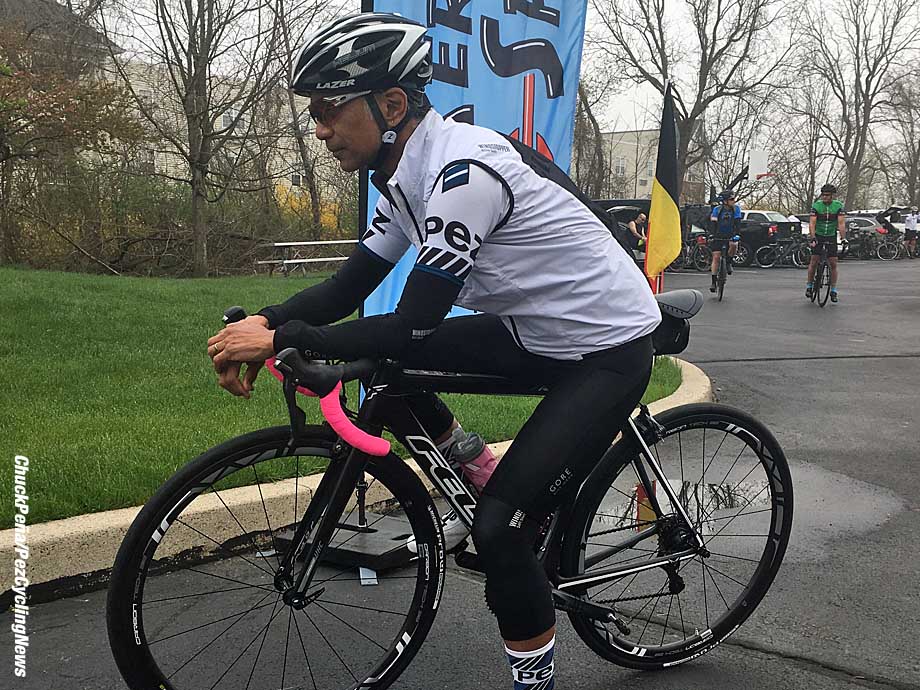 Pondering the 14 climbs that lay ahead in Flèche Buffoon

My second was the Double Peak Metric+ that I rode last June with a group of my regular riding buddies aka useless idiots. We thought the two big climbs would be the hardest part of the ride. We were wrong. The last 30 or so miles was largely up and down with a lot of steep climbs (most of them not that short). We were already pretty fragged plus it was hot. And then there was the wind. Like Fleche Buffoon, fun in a sado-masochistic sort of way. 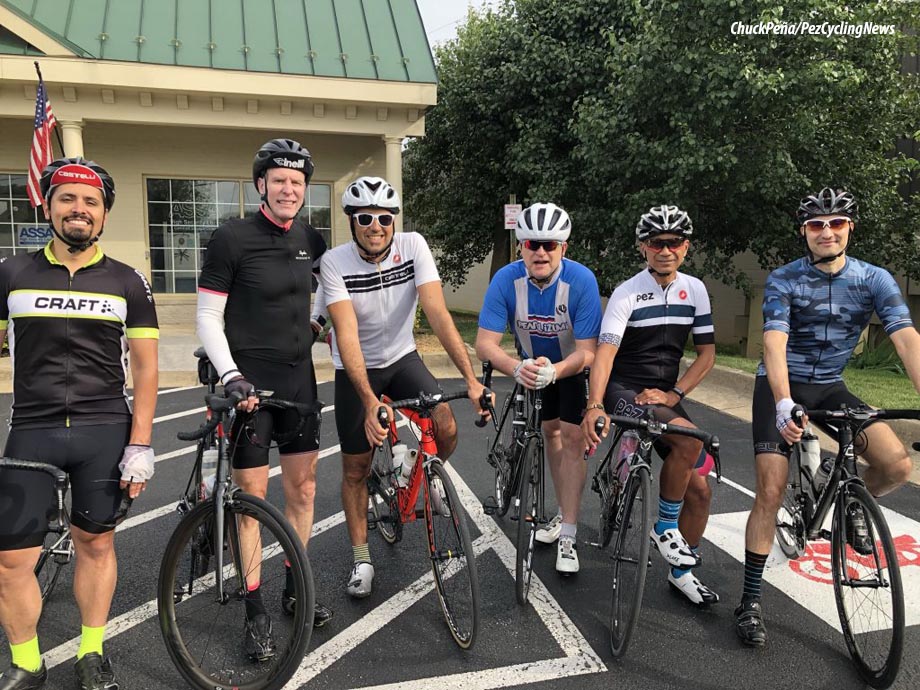 I guess I should add that any time I can get out for a ride with my wife is always a favorite. 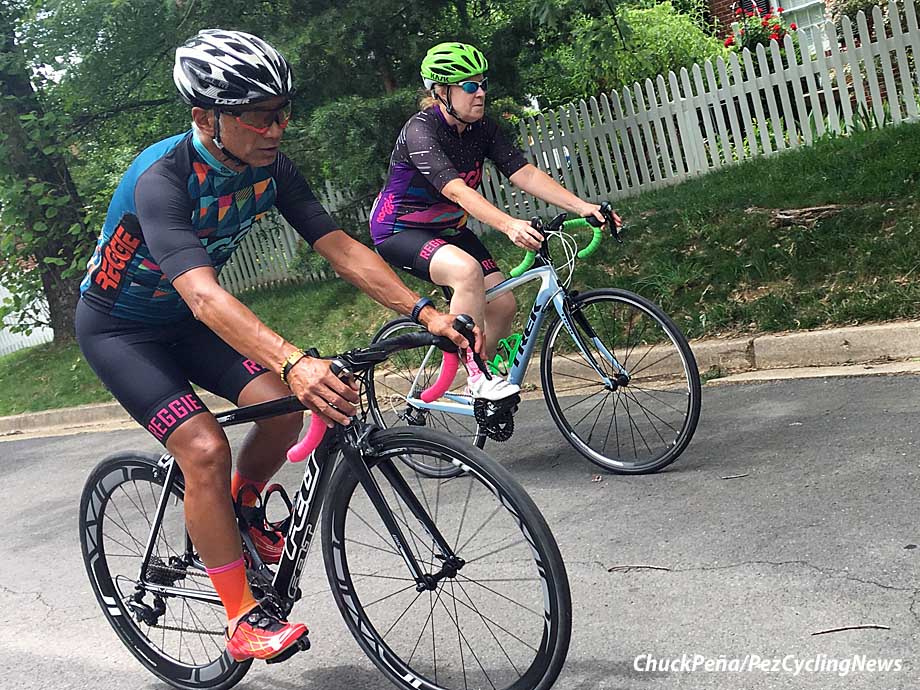 Future upgrades?
Nothing planned, but you never know! 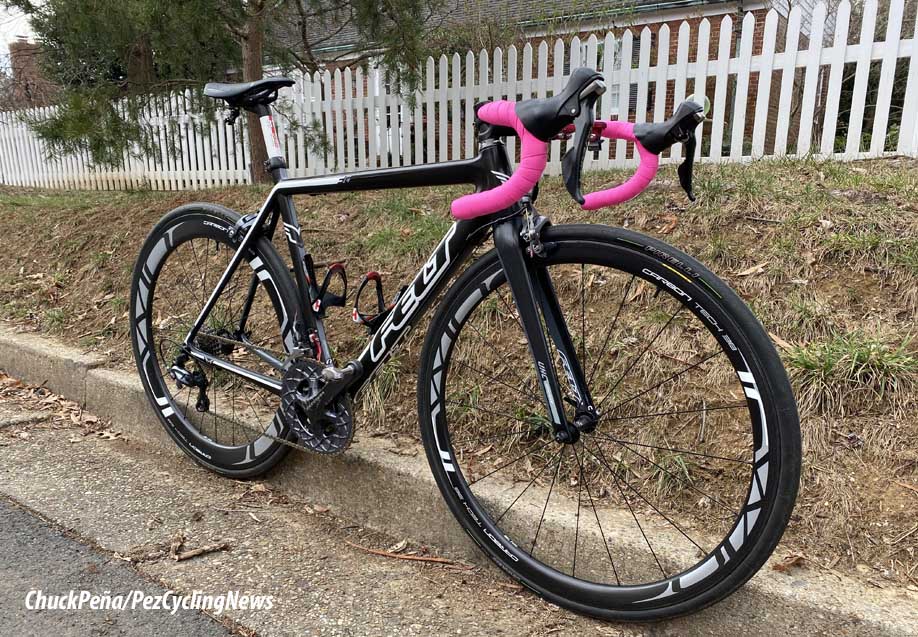 Last words?
Although my Felt FC is now going on 6 years old, it doesn't look or feel that old (at least to me). It's not the latest and greatest (Felt introduced the next version of the FC with TeXtreme carbon fiber shortly after I got the frame), but I'm more than happy with it and can see riding it for many more years. Ultimately, I know any shortcomings or limitations are not about the bike.


PEZ contributor Chuck Peña is a former weekend warrior racer who now just rides for fun and coffee (as well as the occasional taco), but every once in a while manages to prove Fausto Coppi’s adage true: Age and treachery will overcome youth and skill. He lives in Arlington, VA with his wife (who is his favorite riding partner), his daughter (who takes great joy in beating him at golf all the time, but at least he’s still faster on a bike), and their dog (who is always there to greet him when he comes home from a ride). You can follow him on Strava, Twitter, and Instagram.

Great to see Chuck's bike, do you have a bike that you're proud of? Well how about sharing it with fellow PEZ fans and getting it featured in Readers' Rigs so we can all stare at it! Send us a Readers' Rigs submission direct to [email protected] and your bike could be featured in all its glory here on the pages of PEZ.
▲ BACK TO TOP ▲
Related Stories
﻿