Worlds Race Report: Quinn Simmons was the pre-race favourite for junior World championships, and the American talent soloed impressively to the title. The 18-year-old Simmons rode alone for 30 kilometres to finish ahead of Italian Alessio Martinelli and countryman Magnus Sheffield. Enzo Leijnse of the Netherlands was 4th. 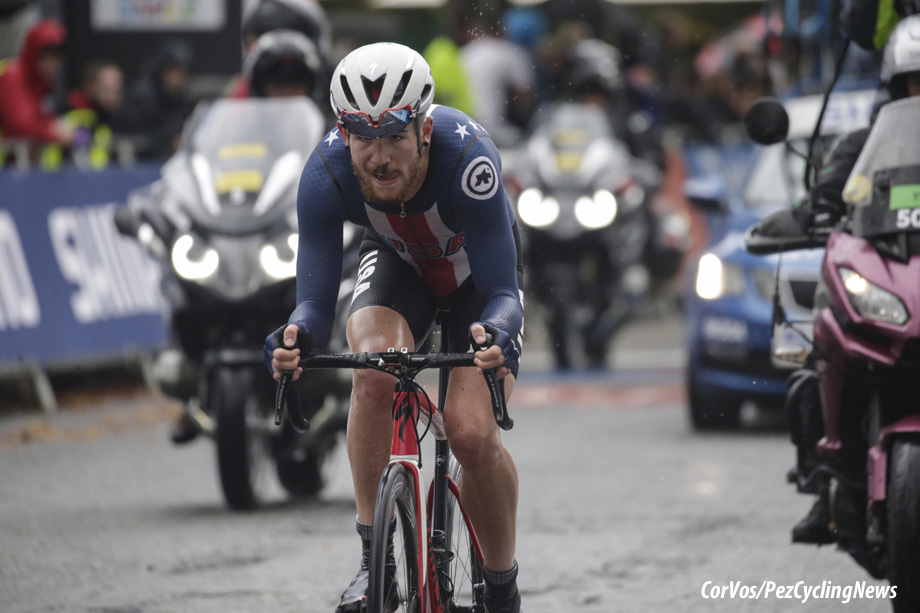 Now that the World tome trial championships are over, we turn our eye to the road race and the first up are the juniors men. Who will be the successor to Remco Evenepoel? Top man, Quinn Simmons, would take some beating, the competition would come from Marco Brenner, Andrii Ponomar and the Dutchmen Hidde van Veenendaal and Lars Boven.

The start in Richmond

Men Junior Road Race - Richmond to Harrogate - 144.5km
The first 37km of this rolling parcours sees the peloton head into the Dales where the first key climb of the day is awaiting them at Kidstones. This early ramp should provide an ideal opportunity for a breakaway to move clear, but the peloton will have ample time to plug that gap on the relatively flat section which follows before Burnsall. The historic landmarks of Barden Tower and Bolton Abbey will then be passed before the second main climb of the day comes between Beamsley and Blubberhouses. This drag onto the exposed moorland could catch some riders unaware before they sweep into Harrogate and take on three laps of the circuit before one final sprint for victory along Parliament Street.

Several riders tried to escape after 15 kilometres, but the peloton didn't let them go. Next it was Alex Vandenbulcke, Michel Hessmann, Gianmarco Garofoli, Sakarias Koller Loland and Max Walker who tried and succeeded in making a nice lead. The five attackers rode to a maximum lead of 1 minute, but the USA team was not going to allow them much time. The Americans rode up Kidstones Bank (3.9 km, maximum 11%) at speed to drop some riders off the back. 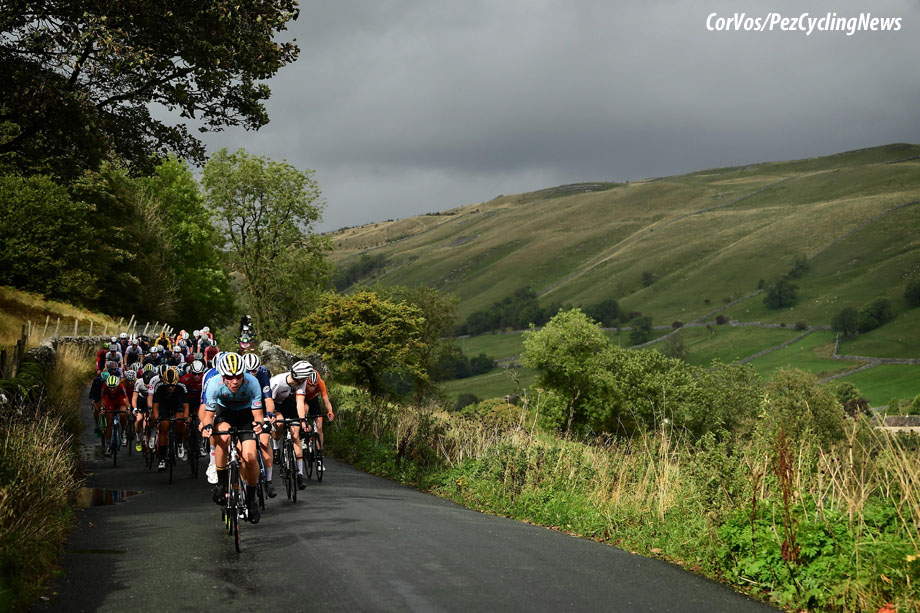 A wet day in Yorkshire

Early escape caught, America in control
At the top of Kidstones Bank the pace eased a little, but the front five riders had already been caught, and the thinned peloton started the last 100 kilometres. Home rider, Lewis Askey and the American Magnus Sheffield jumped away. Their lead was limited to about 30 seconds by a nervous peloton on slippery roads. 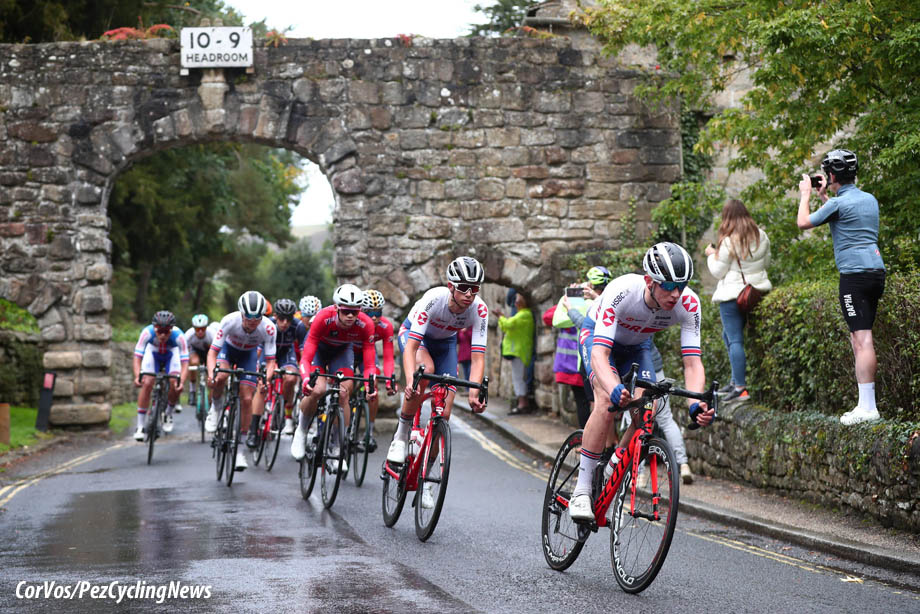 The home team saw the front

Seventy kilometres from the finish there was a crash, with William Blume Levy of Denmark the main victim. The winner of the Tour of Flanders was too injured to continue. The other casualties tried to rejoin the peloton, but the Americans had no intention of slowing the pace. 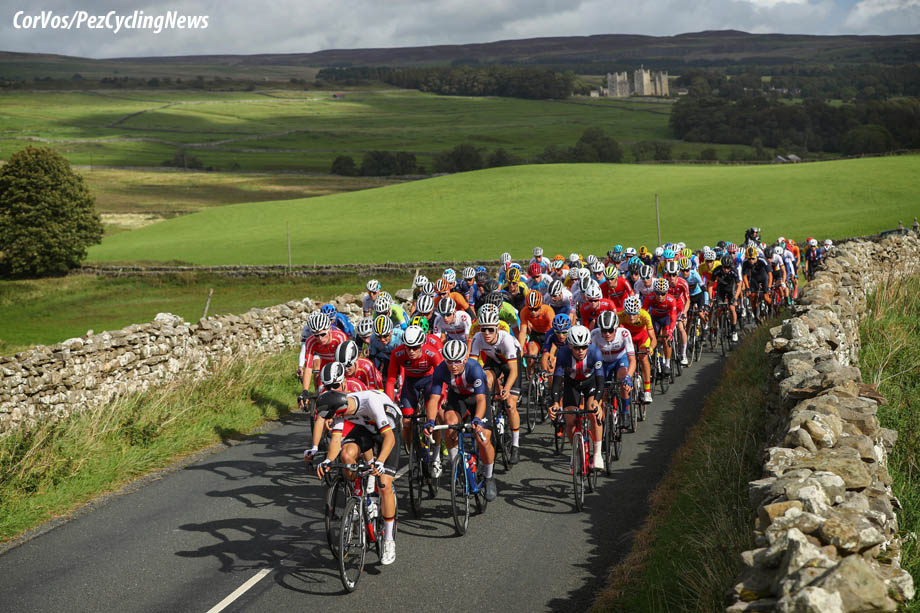 The course if far from flat

The American team decided to accelerate once again on the run-up to the finishing circuits, resulting in a new leading group of five riders. The big difference with earlier escapes was the presence of top favourite Simmons. The winner of Gent-Wevelgem and the Grand Prix Rüebliland could count on the support of his countryman Sheffield. Askey, the Czech Pavel Bittner and the Spaniard Carlos Cano Rodríguez joined them. 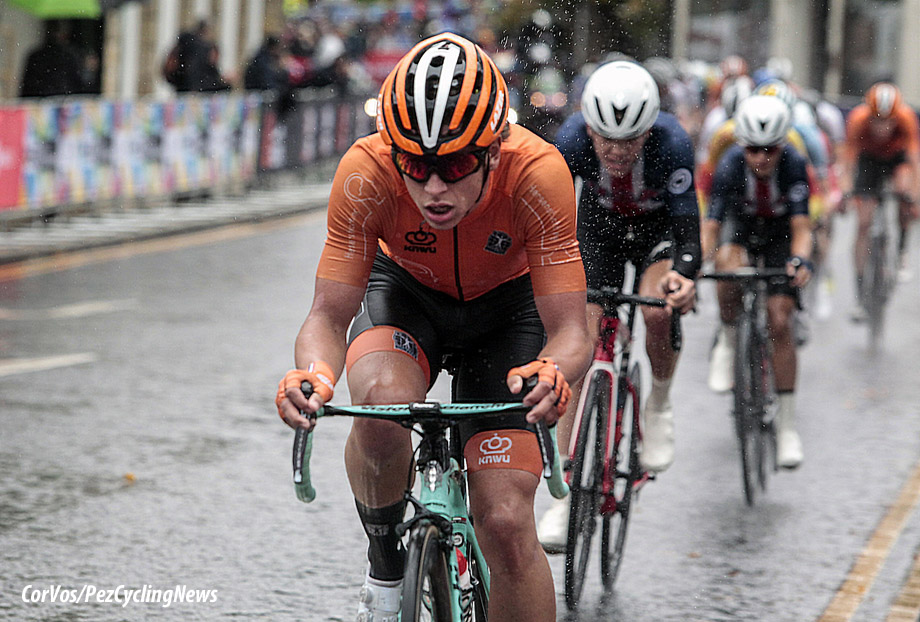 Simmons was in the driving seat, his biggest competitors; Brenner, Ponomar, Hugo Toumire and Samuel Watson had to chase, as did the Italians and the Dutch, but they were not strong enough to close the gap. The difference increased, because the Americans behind were slowing the chase. The break started the first circuit with a 37 second lead with 40 kilometres to go. 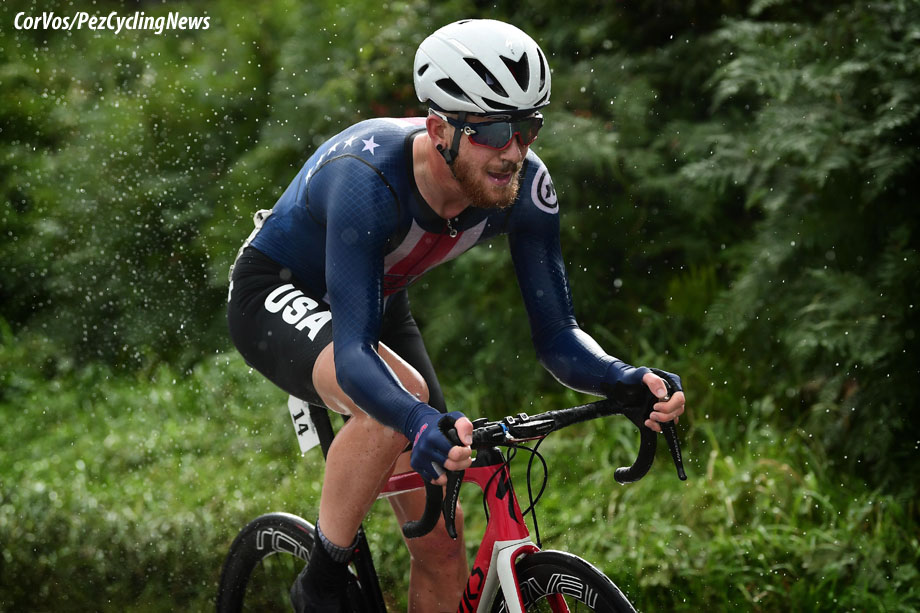 Simmons made his move 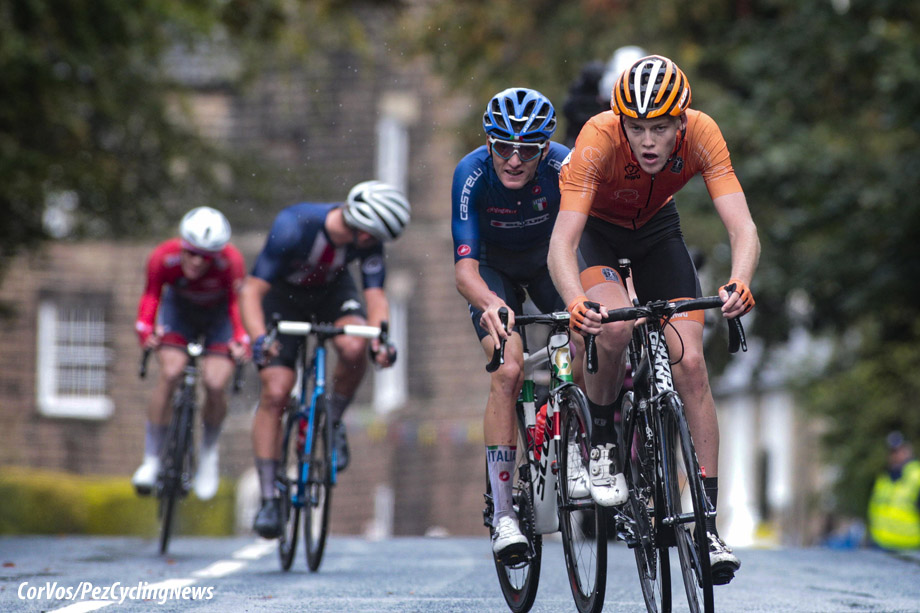 The top favourite gambles
Sheffield rode hard for Simmons, although the difference to the chase group narrowed again, which was the signal for Simmons to make his move. The 18-year-old managed to drop the others, with 30 kilometres remaining. He then managed to extend his lead to 40 seconds with two laps to go. 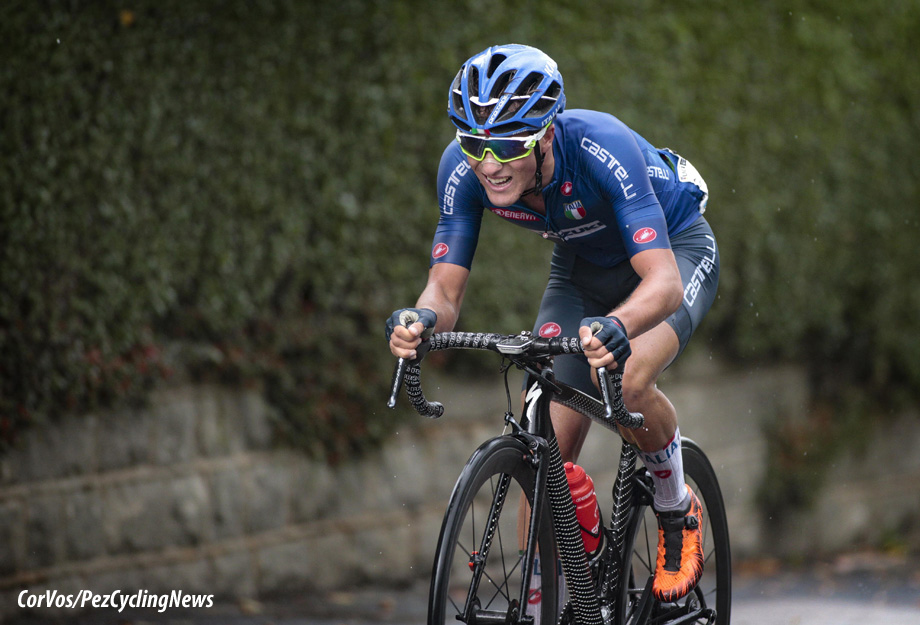 With 20 kilometres to go, the difference had grown to 1 minute, as Alessio Martinelli went on the counterattack. The Italian clearly still had good legs, because he managed to get 15 seconds closer to Simmons in no time. The American kept on pounding away, while Martinelli was stuck at 35 seconds as they hit the final lap. 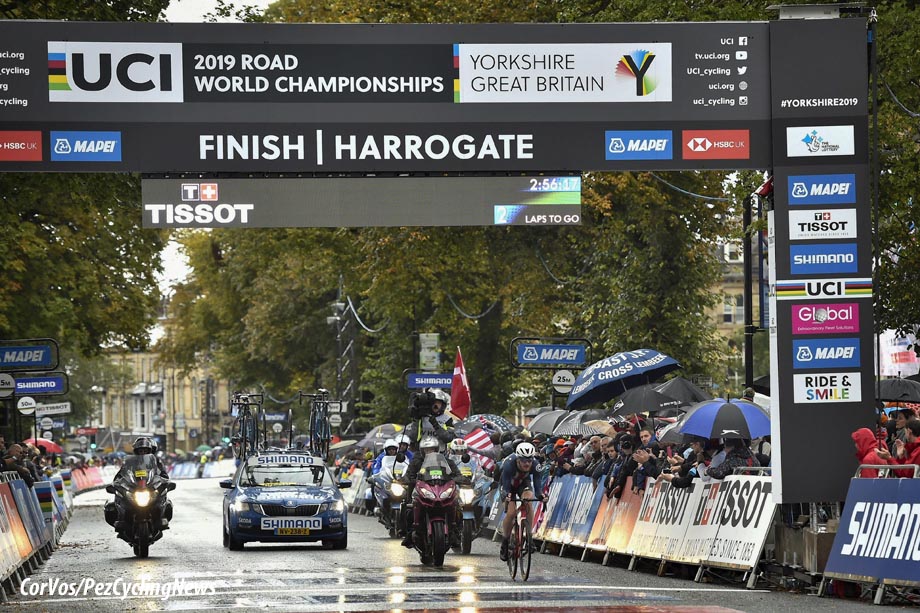 Simmons solos to World title
A chase group - including World time trial champion, Antonio Tiberi, Enzo Leijnse and the Belgians; Ramses Debruyne and Milan Paulus - would be competing for the bronze medal, more than 1 minute down onSimmons, who was on his way to an expected World title. On Monday, Simmons was just outside the medals in the World time trial championship, today he took revenge with a gold medal. Martinelli had to settle for the silver, as the battle for the bronze was still on. 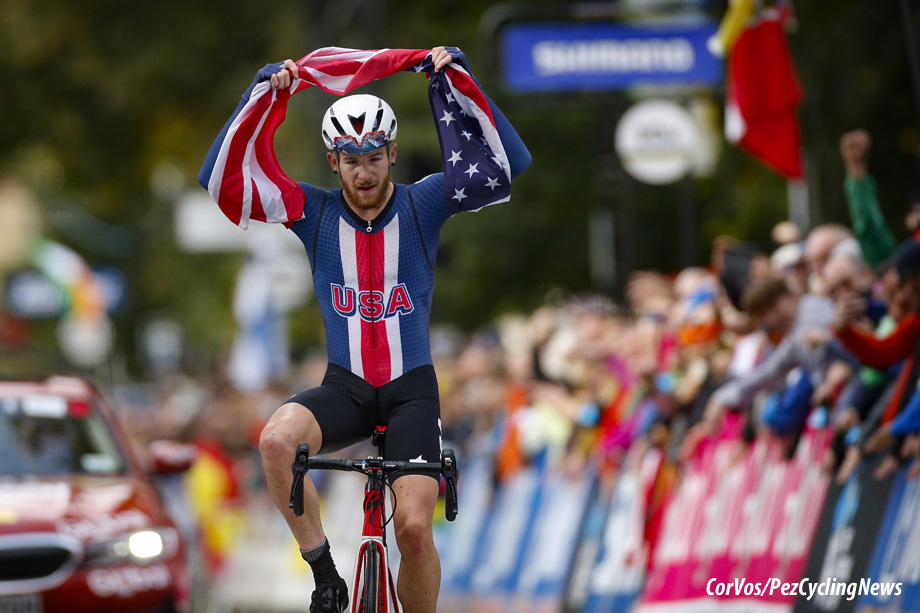 Get the flag right

There was a battle between Leijnse and Gianmarco Garofoli, but with three kilometres to go the Dutchman and the Italian were joined by the strong Sheffield and the Norwegian Vegard Stokke, so there would be a sprint for the bronze medal. It was the strongman of the day, Sheffield who was the fastest in the group for bronze ahead of Leijnse. 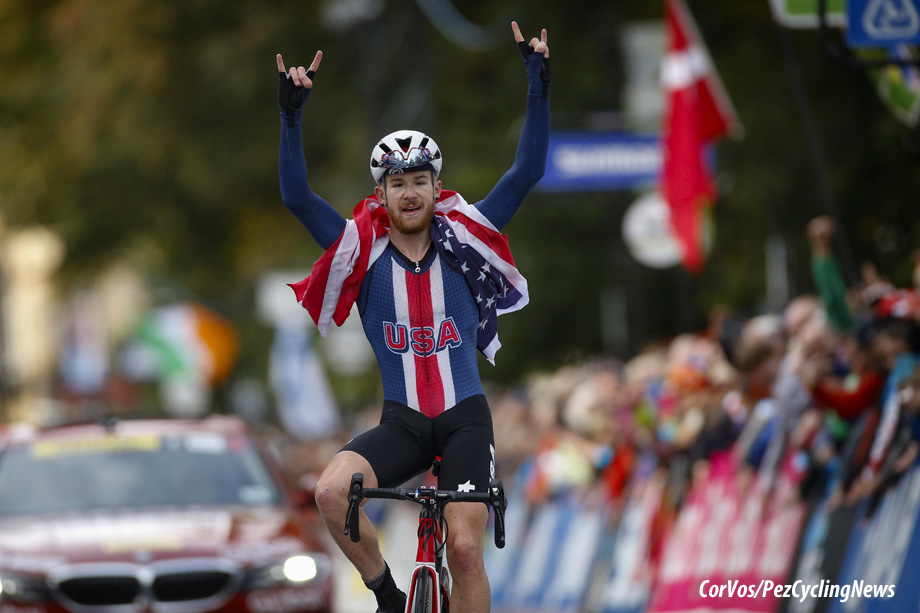 A fine solo win for Simmons

World junior champion, Quinn Simmons (USA): "I had something to prove after the time trial. I already had a good feeling about the course before the start. Moreover, we had a very strong team. I really want to thank everyone for the support. I attacked a little earlier than planned. My teammates immediately went full steam ahead. Magnus really led me out perfectly. The plan was to ride the local circuit together. I finally entered into something earlier than planned, but I succeeded. I'm already looking forward to next year (with Trek-Segafredo). I have focused on this World championship since November last year. I also had something to prove after the individual time trial." 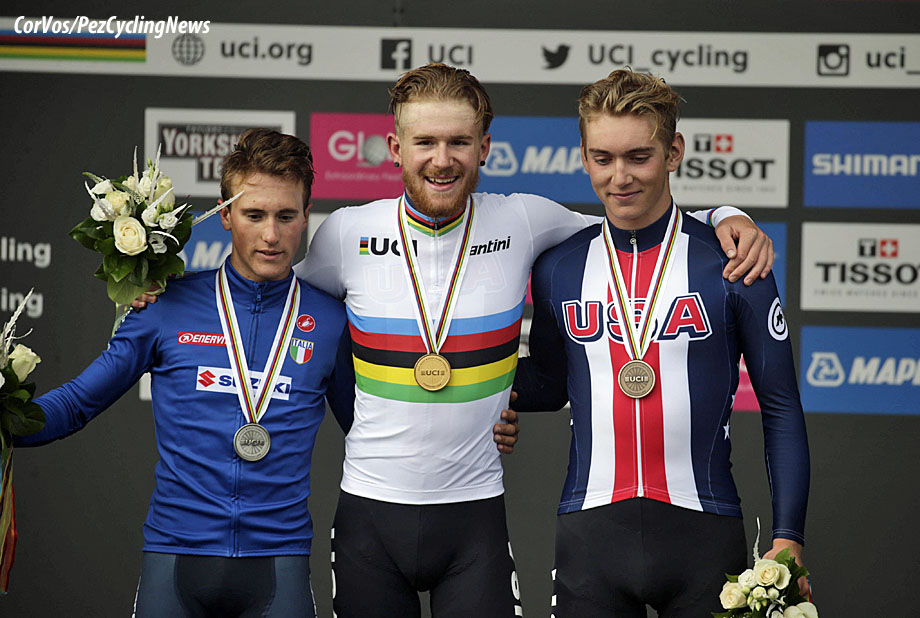