Race Report: It was always destined to be a sprint finish in the coastal town of Peñiscola and once the obligatory breakaway had been reeled in it came down to a fight between the sprint teams. Tinkoff’s Danniele Bennati almost outfoxed the whole race but he was overhauled with 200m to run and BMC’s 'Jempy' Drucker came shooting past Etixx - Quick-Step’s Gianni Meersman who had been forced to go early, having run out of lead-out men. A superb finish to put the BMC team on the scoreboard. 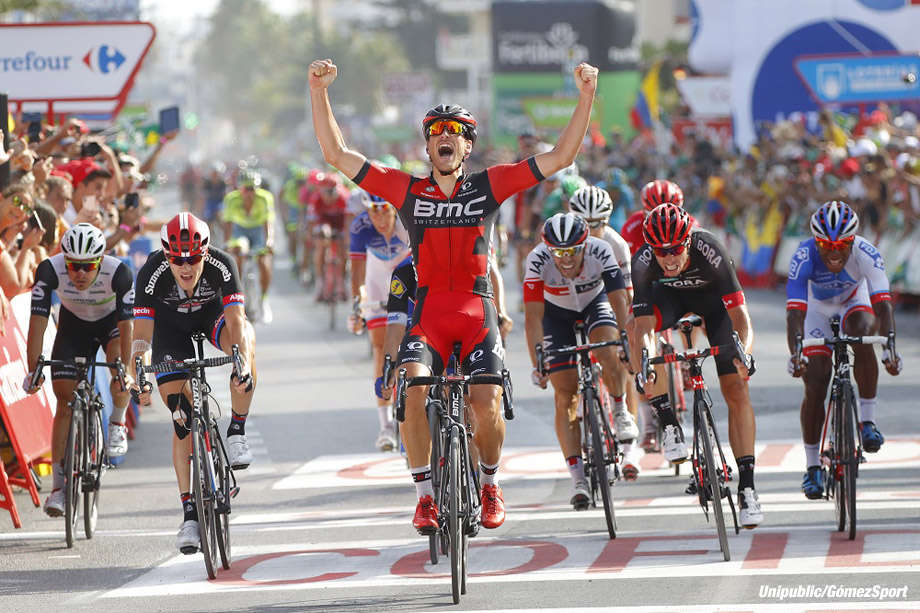 Rumbles in the Bunch
After the fireworks of yesterday when the strongest team in the world was convincingly put to the sword, the fight for the overall is back on! Two things became known after yesterday’s stage: Team Sky is not invincible and the riders are showing considerable signs of tiredness…and the organization disregarded its own rules by allowing 90 riders who finished more than 22 minutes outside the time limit to take to the start line today.

Not everyone is happy with this situation even if it’s a rule that is more often treated as a ‘guideline’. The team DS’s were all called to a meeting this morning and put on notice that it wouldn’t be tolerated again. Jan Bakelants said he felt it was “fraud” and that he would have been happier with the situation if they’d missed the cut by 5 minutes, not 22.

On paper, today’s stage could be the ‘recovery’ day that the Sky riders will have been praying for. Leaving from Alcañiz it was 156km of riding starting with a gradual ascent of the 3rd category Alto Castillo de Morella but it was then downhill for 50km finishing with a flat, tight and highly technical 17km run in to the finish at Peñiscola.

Definitely one for the sprinters if they could pull back the inevitable breakaway. And that breakaway formed almost from the end of the neutralized zone. Six riders clipped off the front and soon began to build a lead. They were Silvan Dillier (BMC), Sven Erik Bystrøm (Katusha), Luis Angel Mate (Cofidis) and Julien Morice (Direct Energie). They were being chased by Davide Villella (Cannondale-Drapac) and Mario Costa (Lampre-Merida) who eventually linked up. 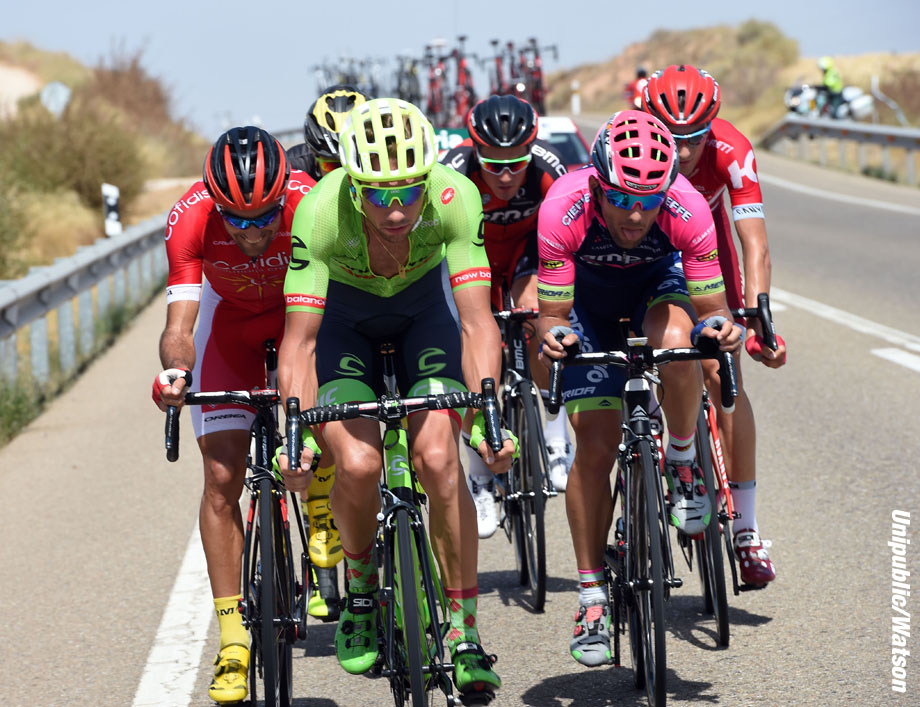 With temperatures reaching 36˚C nobody was all that keen to chase and their gap went out to the 3-minute mark. Giant-Alpecin, thinking of the possible sprint finish, was keeping a check on their progress, helped strangely by Astana.

The only other noteworthy moment was when Simon Yates and his teammate Sam Bewley took a tumble in the middle of the bunch requiring a quick trip to the medical car. 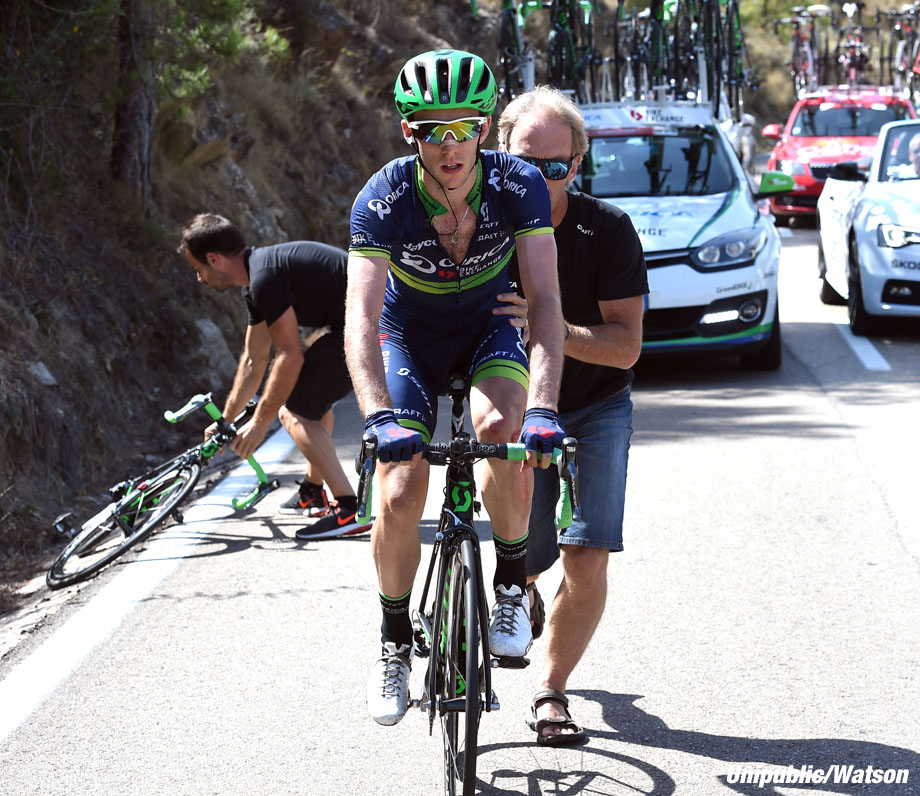 Alto Castillo de Morella
Onto the only counting summit of the day and the riders rode up and past the spectacular basilica in the walled town of Morella. Over the top and onto the tight and twisty first part of the descent, the sprinters’ teams were beginning to pull in the peloton.

IAM Cycling and Dimension Data had sent men up to join the other teams and once the roads straightened out, the gap was very quickly reduced to just under 2 minutes. 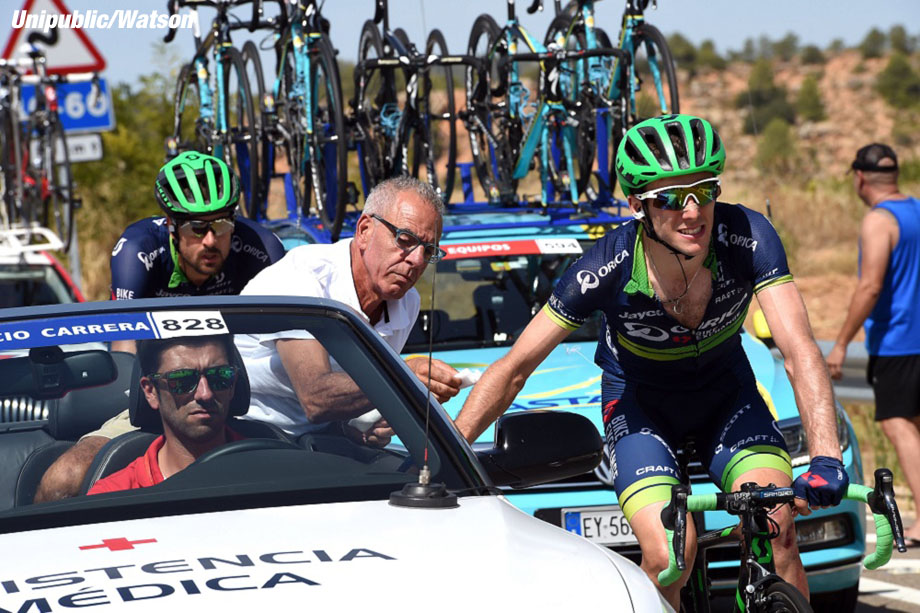 Lots of talk was still going on in the pressroom regarding the decision not to exclude 90 riders who finished outside the time limit yesterday…if the rule had been applied then only two of the six breakaway riders in today’s move would still be riding. This means that four of those involved had effectively saved energy on yesterday’s run in.

This argument will run and run as sponsors want to see their riders competing and can hold organizers and the UCI to ransom. With that in mind, some were saying the time limit rule should be abolished but this creates massive problems for organizers both logistically and from a sporting point of view.

Etixx-QuickStep now added their weight to the chase in the hope of another stage win for Gianni Meersman. 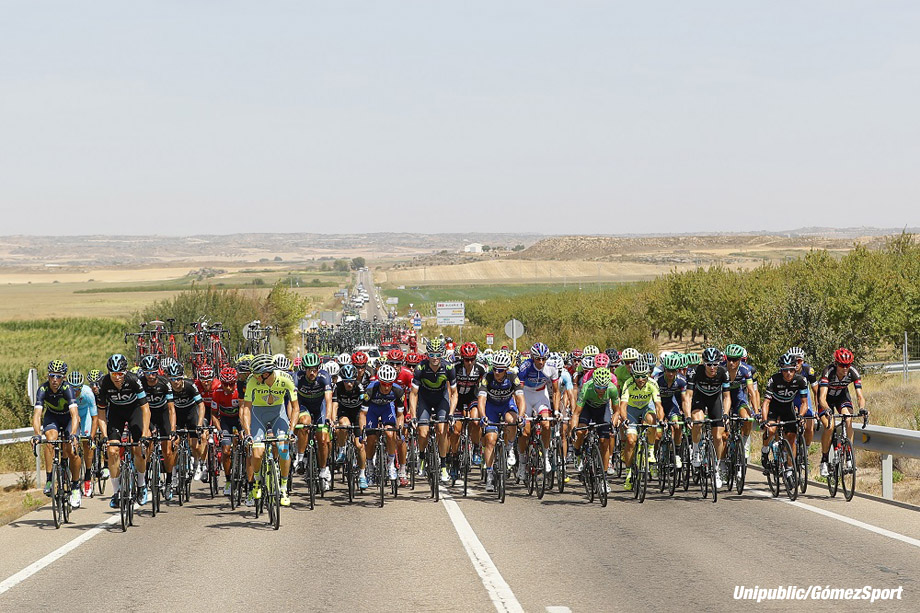 Fast Straight Roads
The bunch was streaking down in pursuit of the escapees but they were flying too as they headed to a possible win in the old walled town of Peñiscola in the Castellón province. There was a prediction of cross/headwinds approaching the finish.

The riders were motoring though, keen to get to the finish and out of the heat of the day. They were well ahead of the fastest race schedule and with 38km to run it might just have been possible if the sprinters hadn’t decided to ride for one of the very rare sprint stages on this year’s Vuelta. The gap was down to 1:20 and going in the wrong direction as far as the break was concerned.

Run to the Finish
On the narrow, technical run to the Intermediate Sprint at Vinaroz the gap had plummeted and they only had 19 seconds as they came through. The peloton had managed to avoid the echelons in the crosswinds but the main GC teams were massing at the head of the bunch.

The break had splintered through the sprint and we now only had three riders (Dillier, Bystrøm and Maté) ahead by 12 seconds with 14.5km to run.

The peloton had brought them back too early and the main teams were rushing to hang back…crowding together in team order but not hustling to bring the trio back into the fold. The leaders, though, knew it was all over and it was all together at 12km to run. 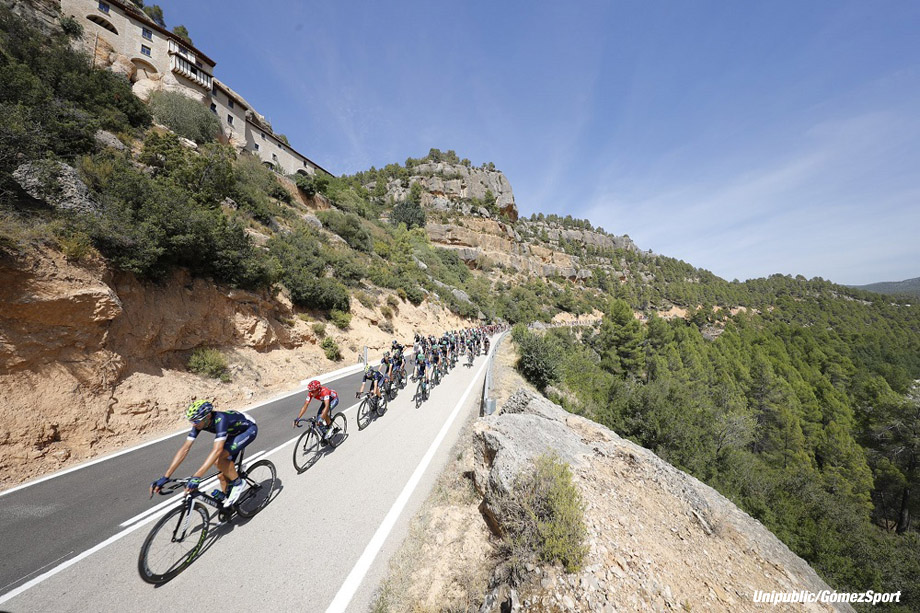 GC Teams Against Sprinters’ Teams
The teams involved in fighting for the overall were trying to keep their men to the fore as they came into the technical turns and roundabouts and with the 3km mark being right on a roundabout with plenty of pinch-points before that, there was a lot of nervous riding going on.

The sprinters were keen to get into the 3km zone where they could dispense with the GC contenders and get on with their job. The pace was high and the streets were narrow, with loads of road furniture to contend with.

Team Sky was keeping the speed high and the teams were all fighting to come forward as the race flashed past the beach. With the old town in the distance, the race switched into the interior streets of the new town. One tight turn after another and Sky had given way to Giant-Alpecin and Dimension Data as they fancied their chances in the bunch romp.

Outside of town, the route kicked up a little but would turn downhill for the final 3km. Roundabout after roundabout and BMC and Giant were choosing the right way round each time.

Run to Castell del Papa Luna
And Daniele Bennati (Tinkoff) hit everybody by attacking just before the final series of technical turns with just under 2km to the finish. It was a great move but the sprinters were not to be denied as they overhauled him with 200m to go. 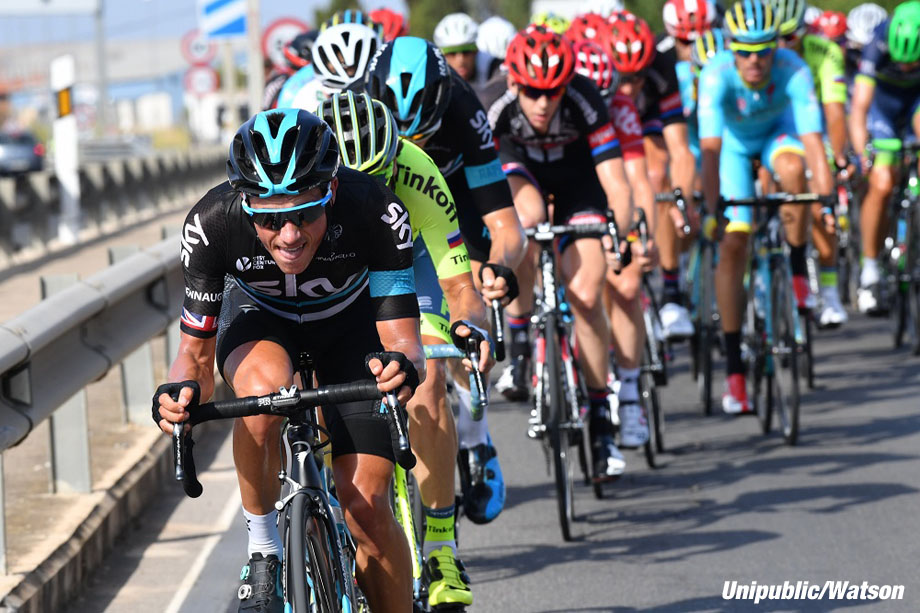 It had been such a desperate chase that the sprinters had used up all of the lead-out men and Gianni Meersman, vainly looking around for help, decided he had to go for it himself.

With the finish line fast approaching he was out in front but BMC’s Jean-Pierre ‘Jempy’ Drucker was hunting him down. Meersman had gone just too soon and it was too much as he was passed by the man from Luxembourg. Drucker won by a good bike’s length and Meersman was also passed by Bora Argon’s Rudiger Selig and Giant-Alpecin’s Nikias Arndt and could only finish 4th.

BMC had worked hard all day and were amply rewarded with a superb win for Drucker…his 3rd professional win and the rider was overjoyed! It was a hectic finish but BMC played it perfectly…back to the drawing board for Etixx-QuickStep.

Tinkoff’s Bennati had thrown a spanner in the works and it almost came off.

Back to the mountains tomorrow with a summit finish but the day belongs to Jempy and his BMC team as they celebrate their first victory in this year’s Vuelta.

The second rest day is on Tuesday, but don't worry lost more Vuelta to come on PEZ.