The Larry H. Miller Tour of Utah stage 5 rolled 115 miles from Layton to Bountiful, gaining 4,200 feet in the process, and will go down in history as the stage where Robin Carpenter (Holowesko-Citadel) crashed early on, then chased back from several minutes down to capture 4th place in the sprint. Here's Darrell Park's photo report of the day. 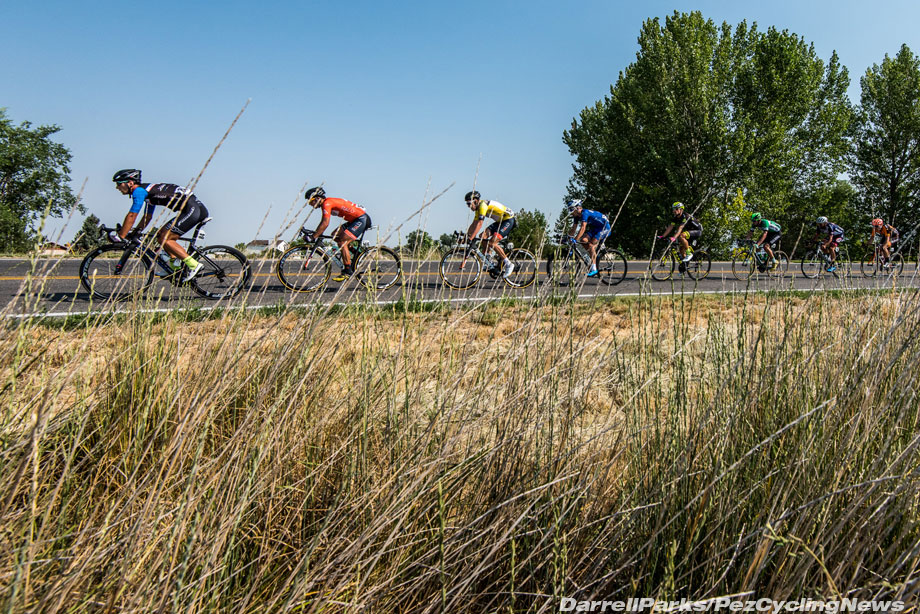 The official Tour of Utah website describes the day like this:
Davis County is quickly becoming a fan favorite for the Tour of Utah, with massive crowds and dynamic racing a staple of every year’s route. New for 2017 will be a stage start in Layton, which will provide spectators with two opportunities to view the race. Soon after the start, the race will travel through Hill Air Force Base for the first time, home of the F-16 and F-35 fighter jets. After traveling 53 miles along the rural roads of Davis and Weber counties, spectators will see the race pass through Downtown Layton for a second time, heading for the traditional two-lap finish in Bountiful. These nine-mile circuits include the two crushing climbs across the Bountiful Bench. The winner is going to be a strong rouleur who can get over the climbs and outkick those few remaining in the peloton.

There were a couple of hard crashes early on... 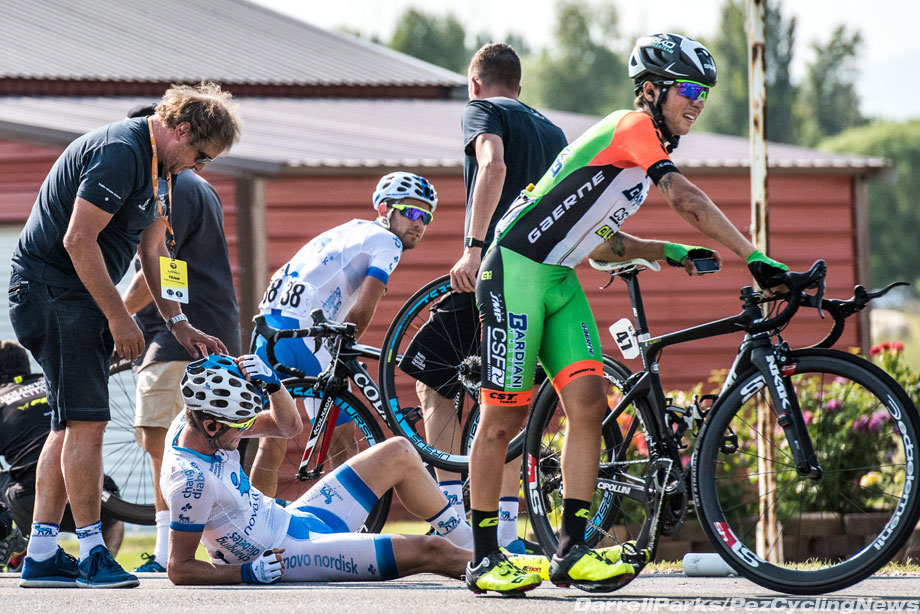 But the "play of the day" award for Robin Carpenter started when he went down here... 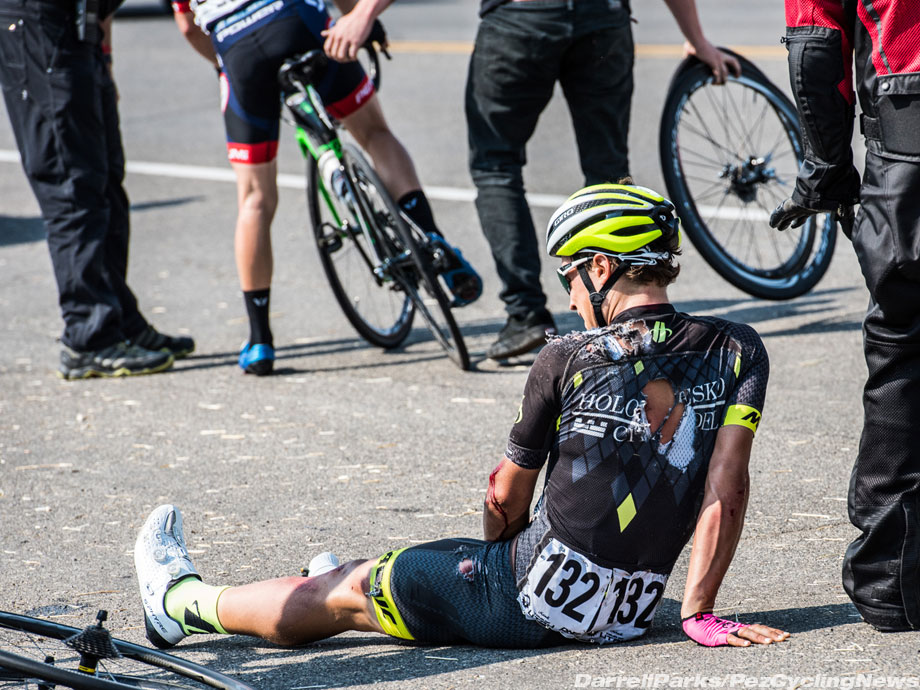 The situation worsened when he discovered his helmet had cracked - which he guessed was from another rider impacting it during the fall, and not from smacking his head on the pavement.   Race rules prohibit a rider from continuing without a functioning helmet, and his team support car did not have an extra lid on board.  The tension mounted as the race rode away, while Carpenter was checked for a concussion by race officials.  When he was cleared to ride but still didn't have a helmet, things got worse.  He was saved by borrowing a fan's helmet - which he had to walk along the course to retrieve since riding without one is forbidden.  He remounted and joined the chase amongst the team cars - eventually catching the group not far from the finish.  He got to the front and amazingly took 4th on the stage. 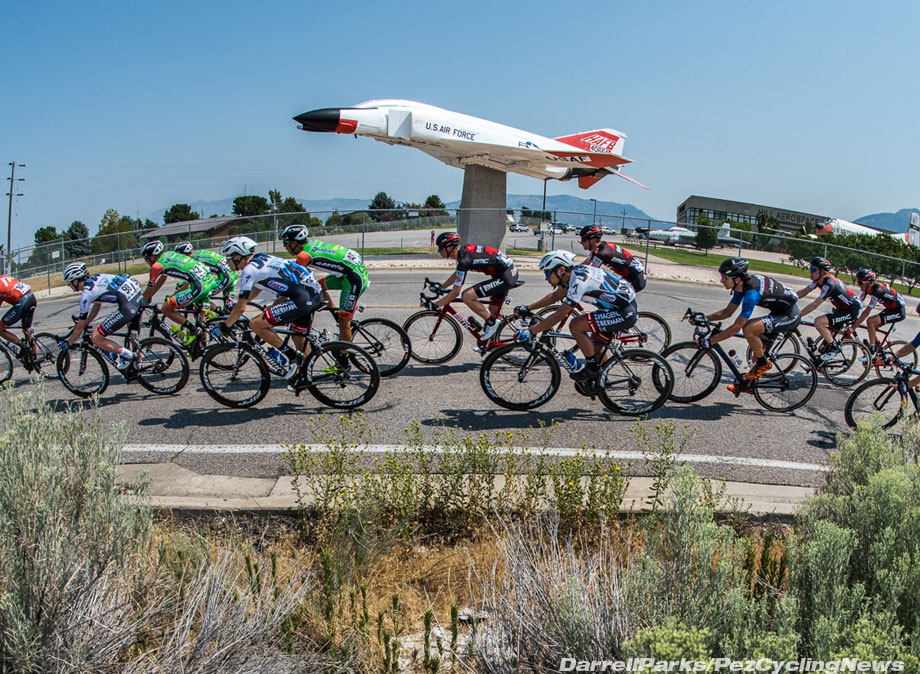 The bunch made a low pass by the Hills Airforce base. 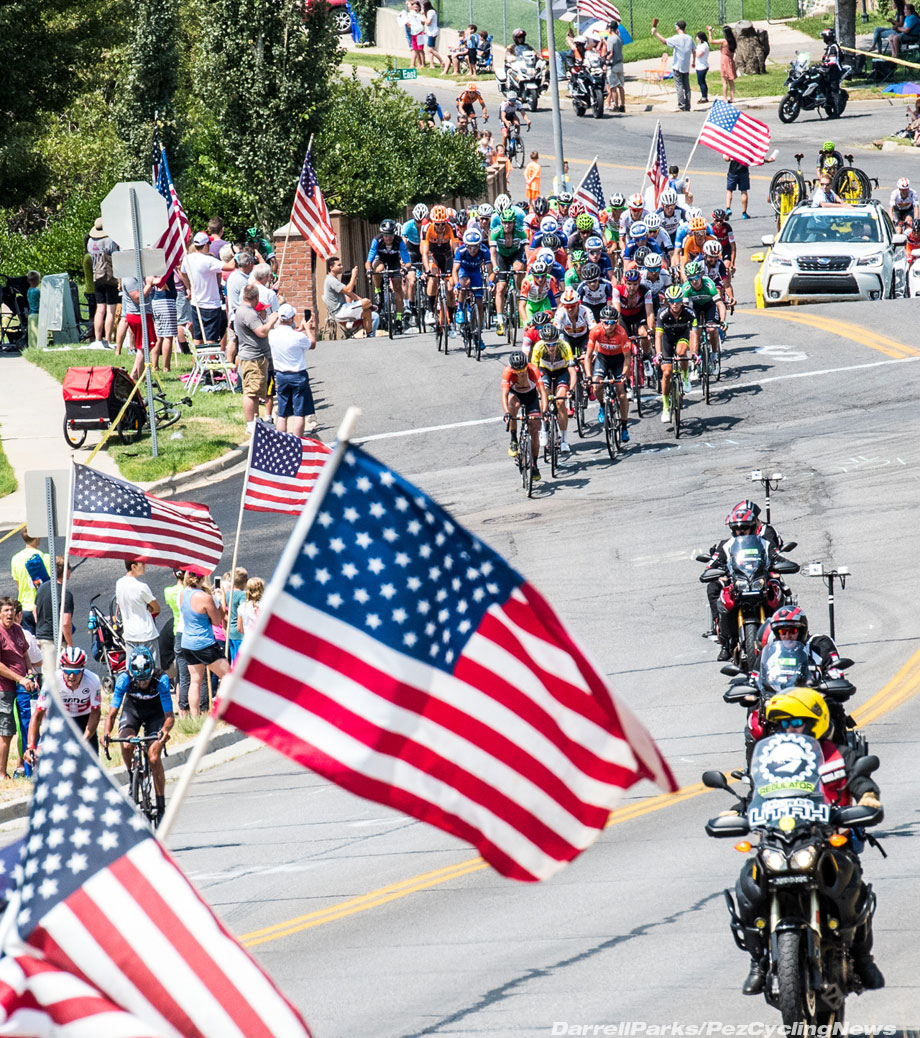 Based on flag count alone, you could say the race is pretty close to the heartland of America. 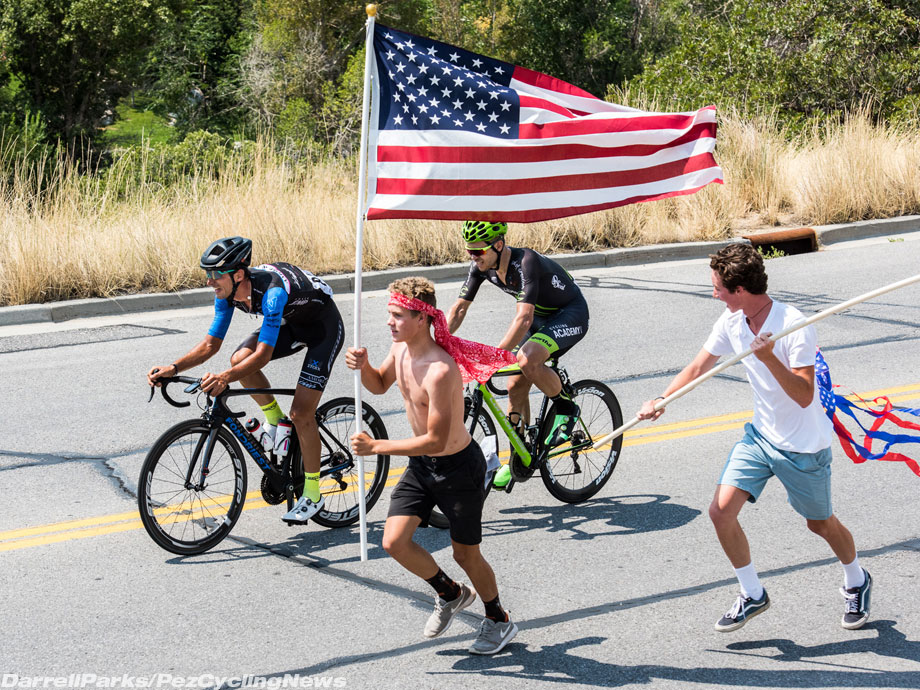 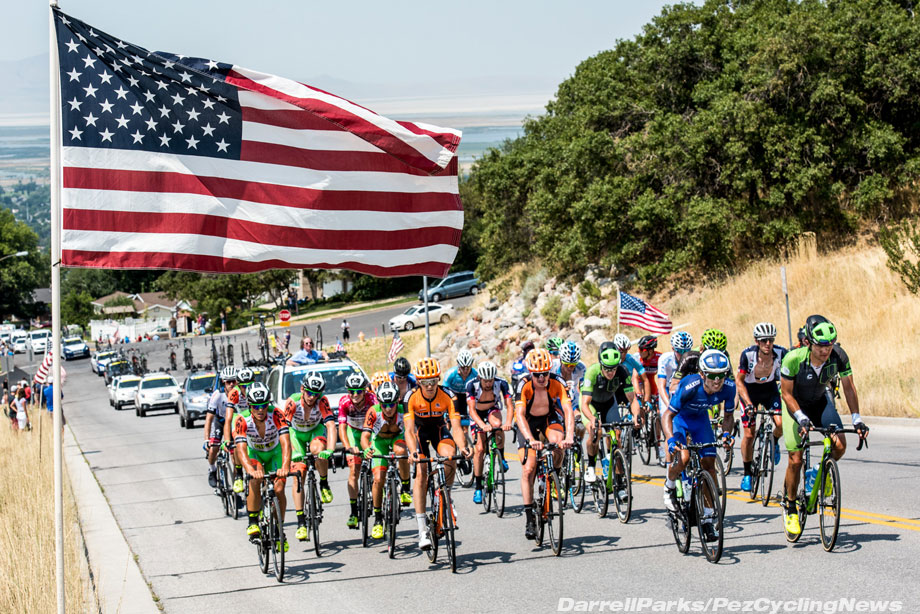 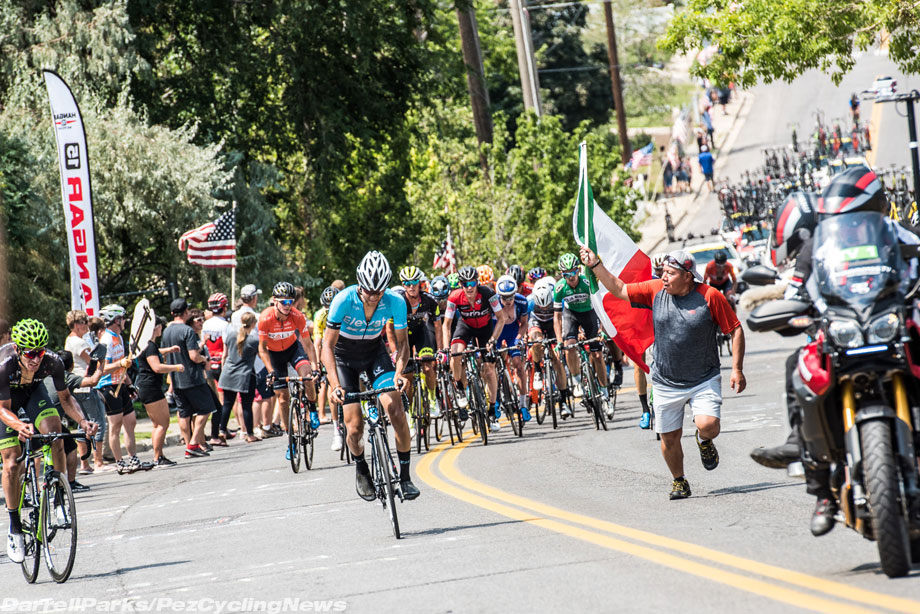 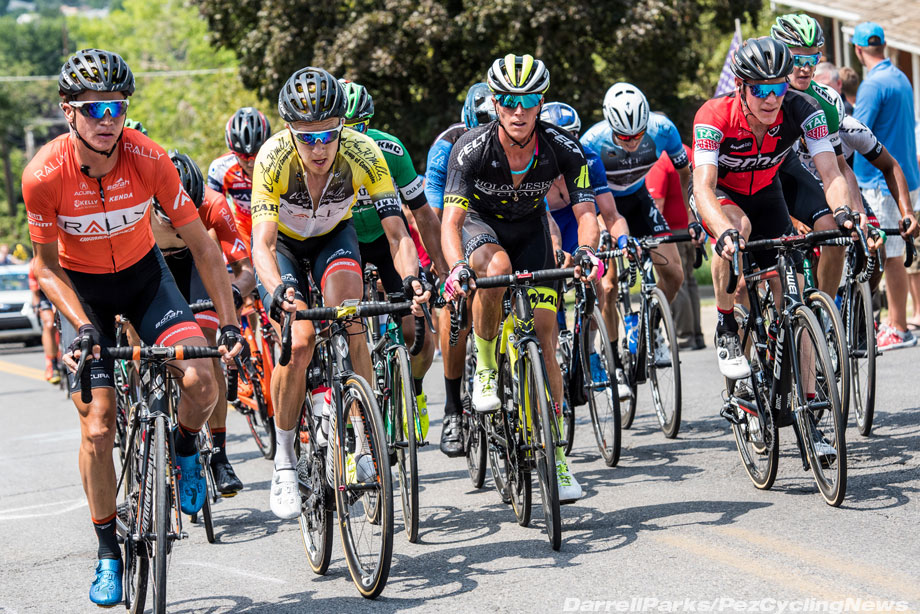 Here comes the sprint - UHC's Travis McCabe took the win - but look who's there 2nd from left - Robin Carpenter. 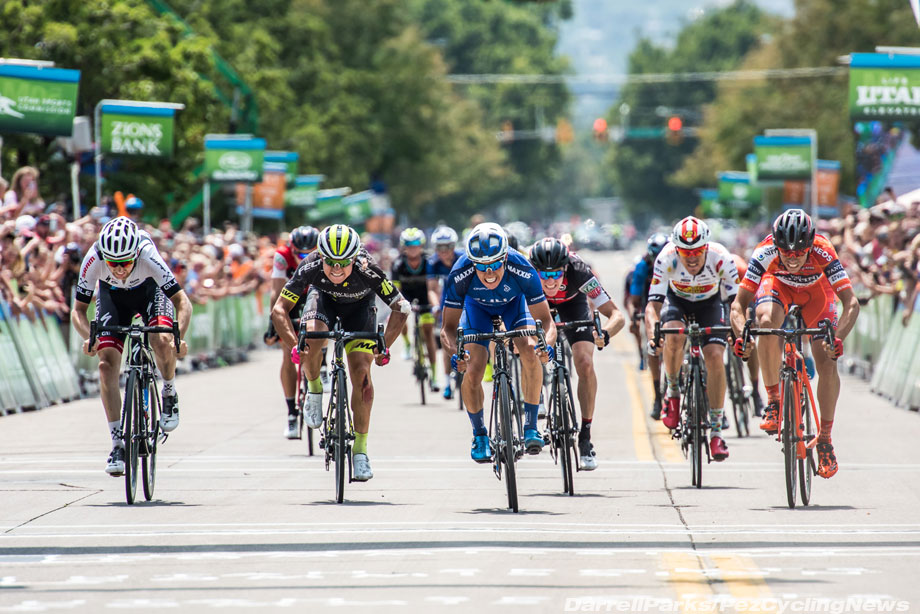 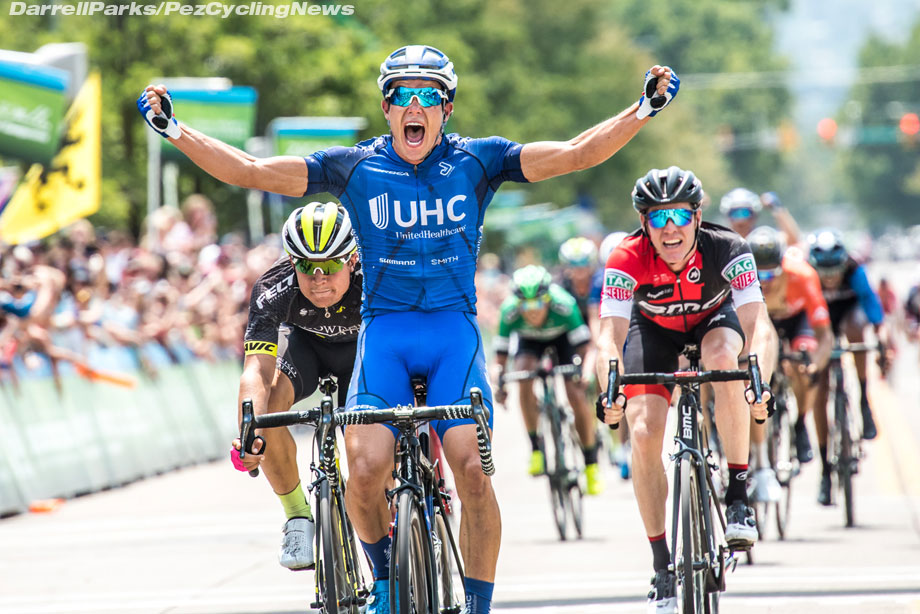 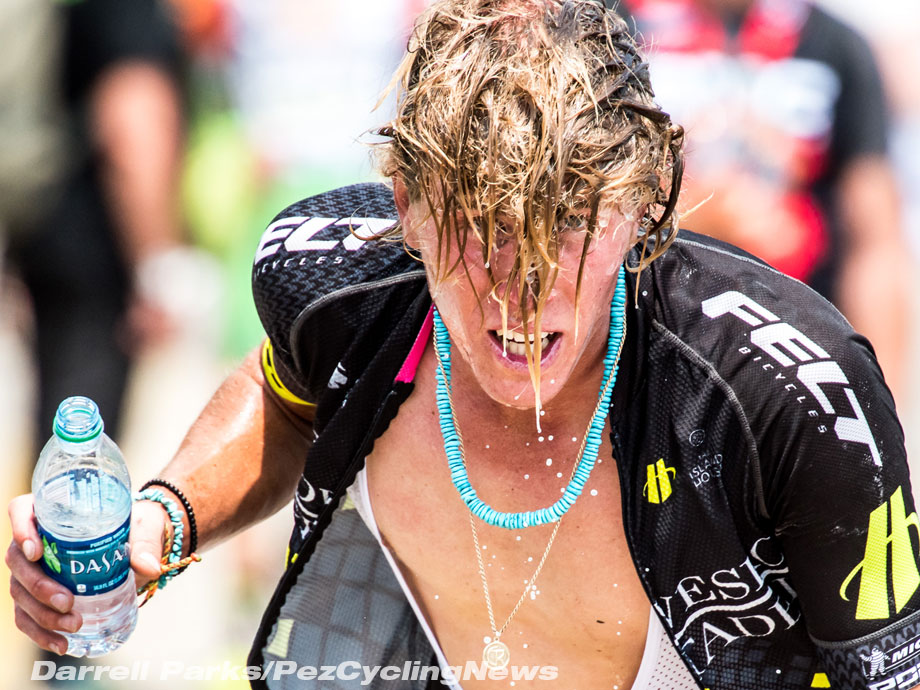 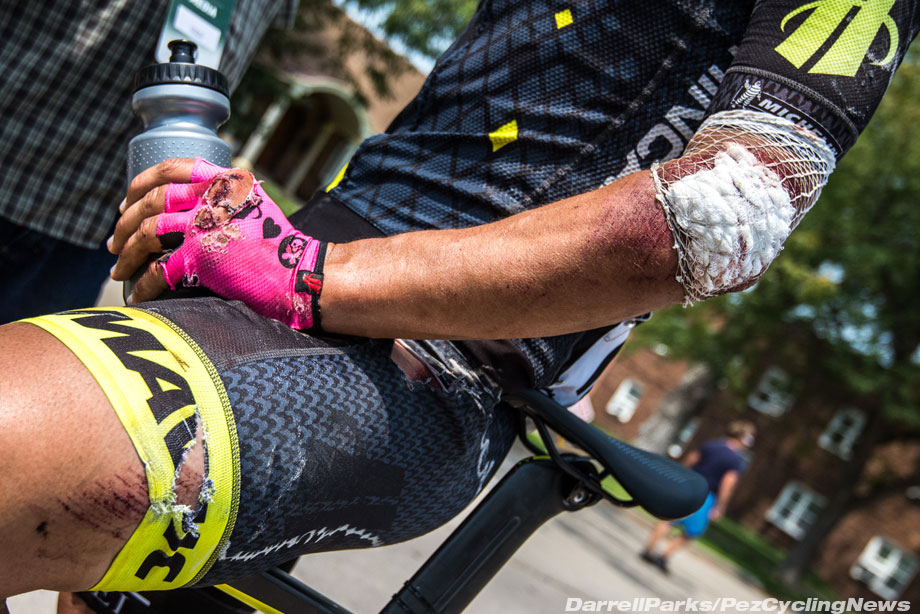 Robin Carpenter afterwards (above)  - that's gonna be a sticky night ahead...  while TJ Eisenhart enjoyed a day as the Fan Favorite leader... 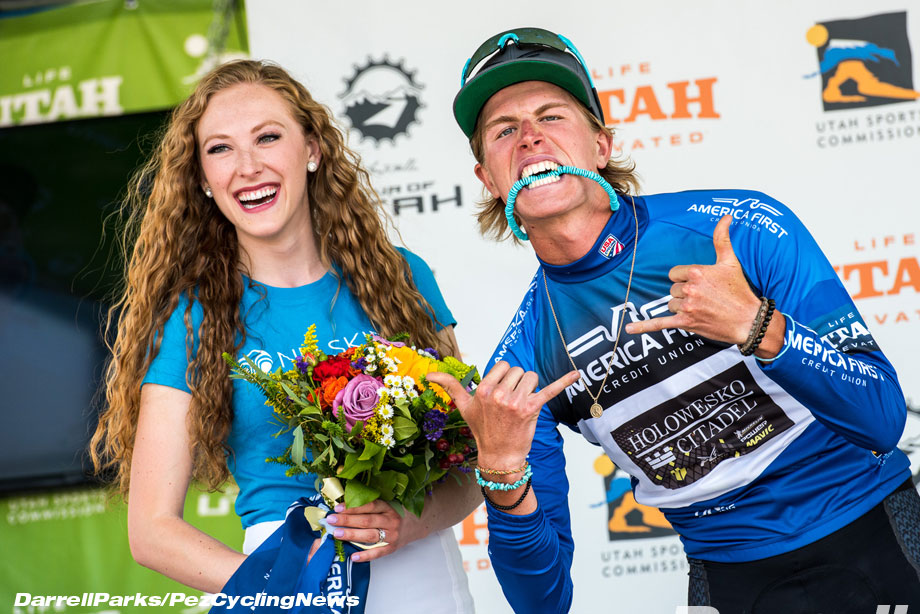