Roadside: With the Tour de France starting on Saturday you would expect Team Sky to dominate the home British road race championship to take that stripped jersey over the English Channel. The race didn't quite go the WorldTour team's way with Connor Swift of the Continental Madison Genesis team taking the top honours. Callum MacGregor was Roadside in the North East of England to see the action unfold. 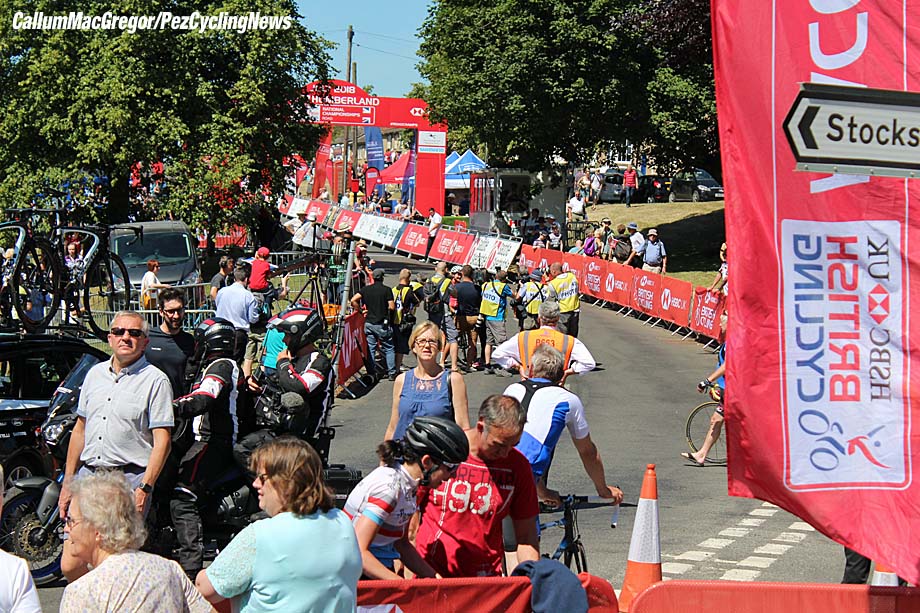 Stanfordham village transformed for the day

The British Elite Men's Road Championship produced a new star after 187kms of racing on Sunday with Connor Swift (cousin of UAE Team Emirates Ben Swift) taking the victory after another attritional race saw only 38 finishers from the 140 plus starters. With defending champion Steve Cummings absent, the form appearing not to be what it was, the race started with three former champions, Adam Blythe, Aqua Blue Sport, Ian Stannard, Team Sky and Mark Cavendish, Dimension Data all hoping to pull on the fabled jersey once again. 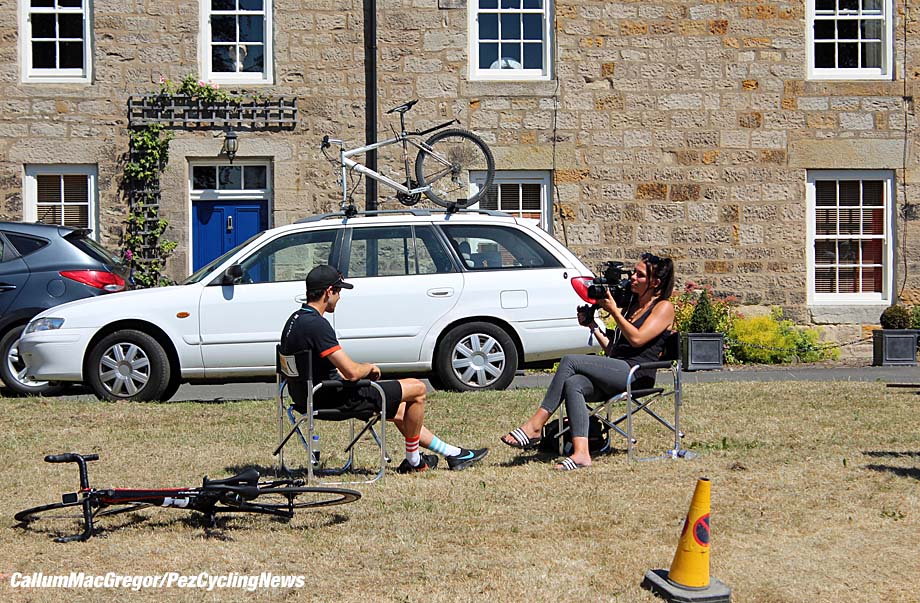 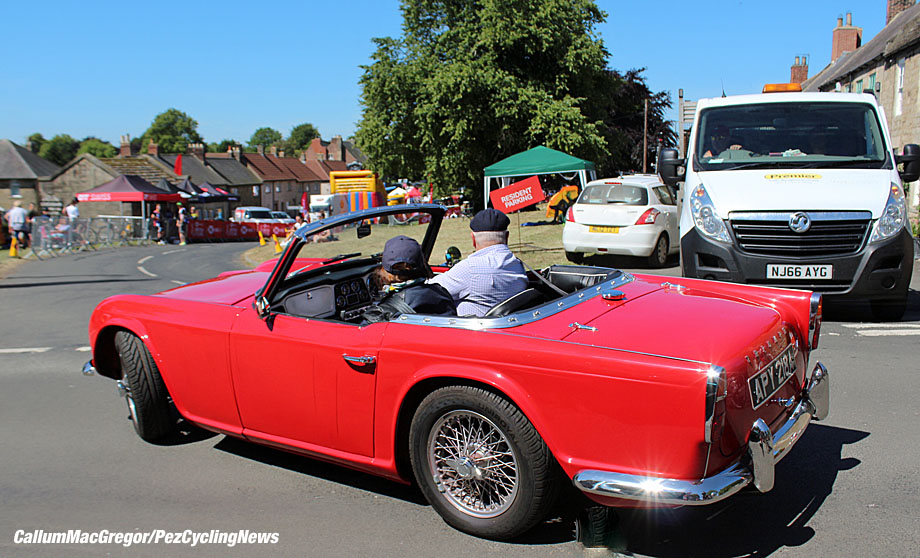 Noticeable non-starters were Geraint Thomas, presumably satisfied with his win in the time trial and team mate Luke Rowe also a no show, as was Peter Kennaugh, BORA-Hansgrohe and Dan McLay, EF Education First-Drapac. In total there were some thirty riders who failed to start.

The race was last in Northumberland in 2011 when Sir Bradley ran out the winner with Team Sky taking the one, two, three. We were expecting a similar show of strength today, we were to be proved wrong how-ever. Without "G" and Luke the team was below full strength and there was no sign of the lower division teams being intimidated by the World Tour Riders present.

The race route comprised a lap of a smaller circuit of 22 kilometres to start, four laps of a bigger 35 kilometre circuit and a final lap of the smaller circuit again, before dropping back in to the picturesque village of Stamfordham for the finish. Race distance of 185 kilometres, the climbs and the heat would prove the winner had survived best what was to be a brutal day out. The course was far from flat with the Ryal climb being the major obstacle with the gradient topping 20% in parts. 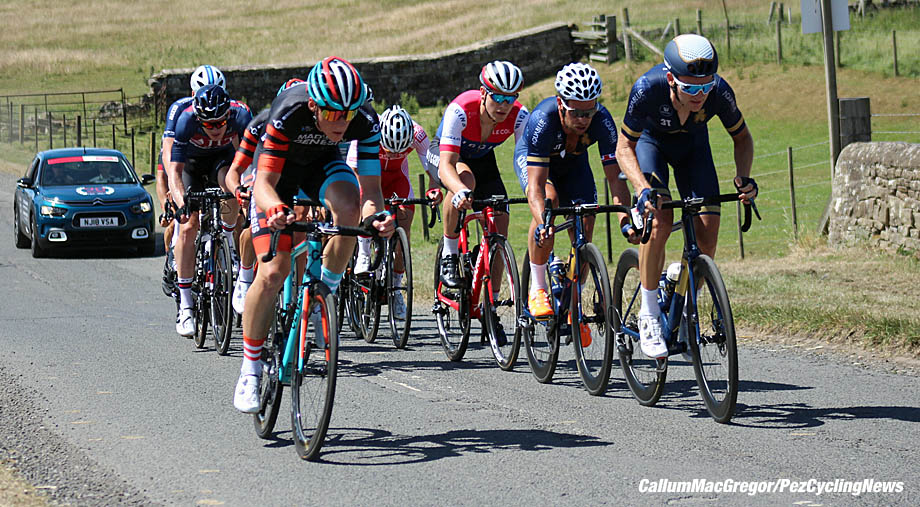 Our first sight of the riders was less than 10km in and Owain Doull was forcing the pace for Team Sky, although there were none of his team mates applying any additional pressure, but it was early. Having set up camp just over the summit of the Ryal climb, with folding chairs, drinks cooler and a hamper that ensured we were never likely to get "the knock" we settled down to watch the action. We were not disappointed with a large group of approximately eighteen off the front and clear by a minute driving hard into a strong headwind. Conspicuously there was only one Team Sky rider, Owain Doull, with the domestic teams including Team Wiggins, Madison Genesis, JLT Condor, Richardson Trek and One Pro Cycling, Canyon Eisberg all represented. Front and centre as they passed us was Connor Swift, a long and hard day out lay ahead. 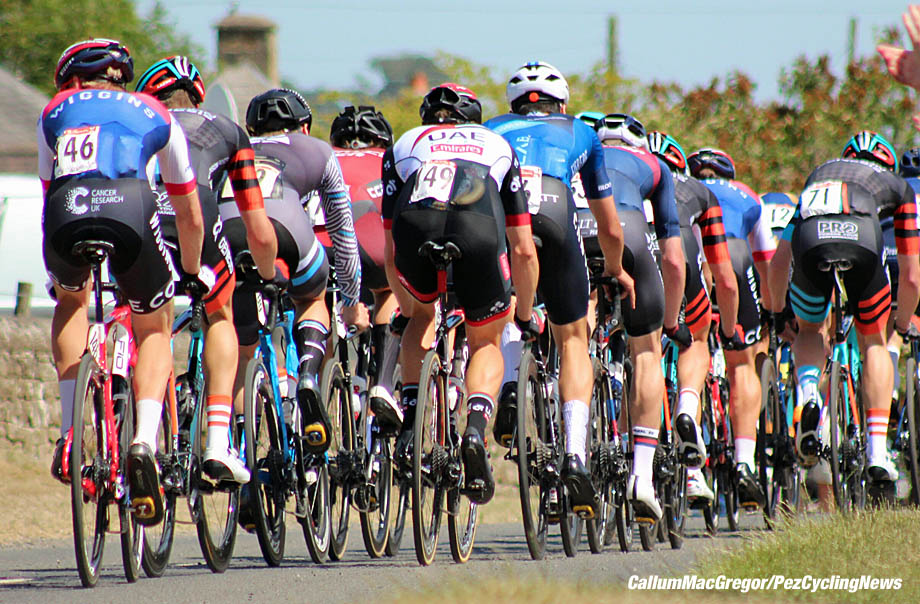 The break heads off into a strong headwind 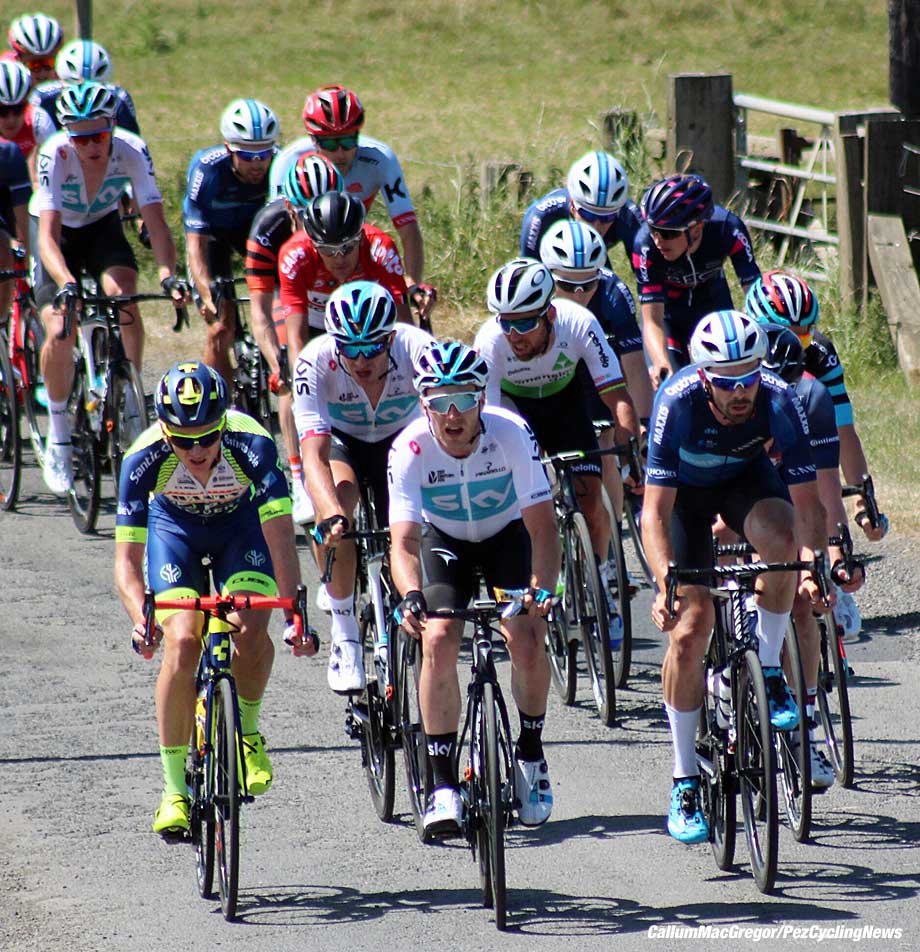 Mark McNally, Team Sky, Cav and James Shaw Lotto Soudal, at the head of the chase

The chasers had some firepower, with Team Sky pulling hard, Katusha-Alpecin's Alex Dowsett (who later fell victim to a crash which called a halt to his day) and Mark McNally, Wanty-Groupe Gobert contributing. Having watched the stragglers pass we settled down to await the riders appear after their second ascent of the Ryal. In the baking sun the break appeared with Madison Genesis driving at the front. Former champion Adam Blythe also pressing on the pedals. Sole Team Sky representative Owain Doull had now taken up position at the back of the break. The chase was becoming more concerted with Team Sky starting to worry with the break over two minutes. 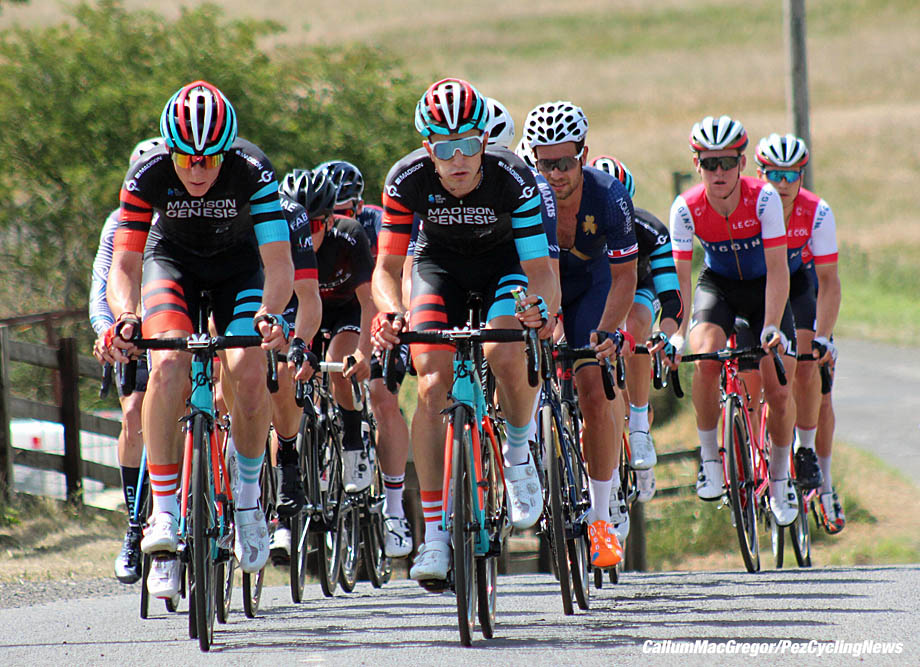 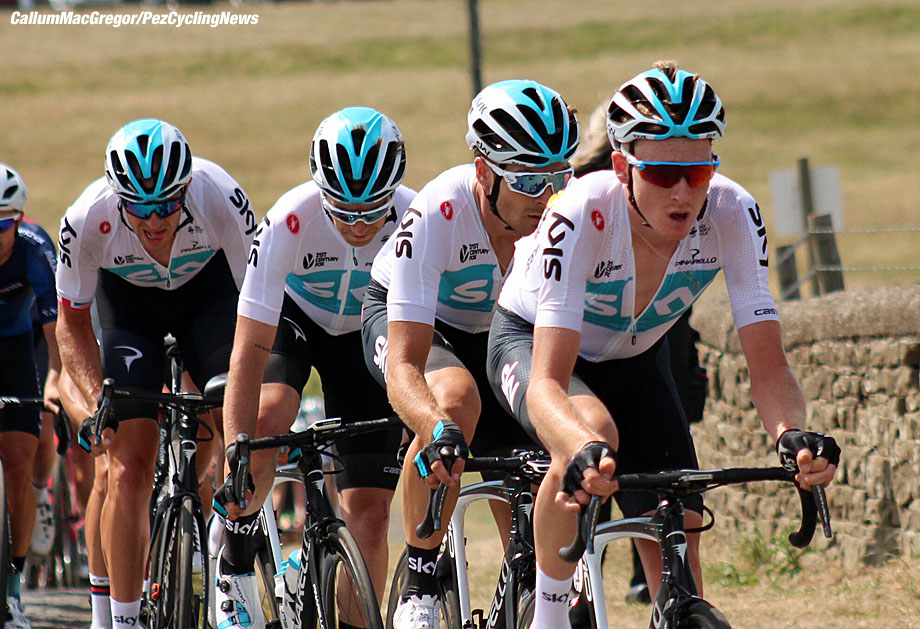 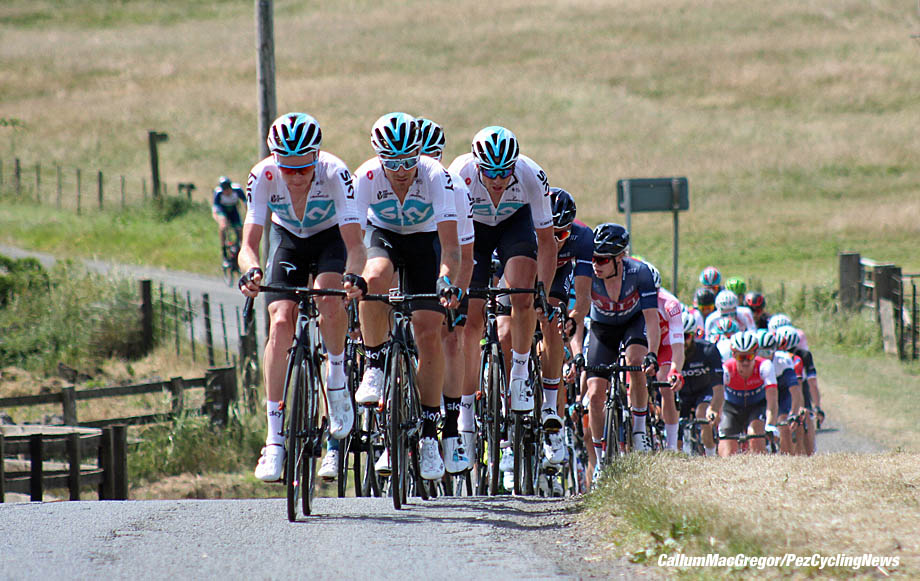 The attrition had begun and there were gaps appearing in the bunch with a significant number of riders tailed off but refusing to throw in the towel quite yet. 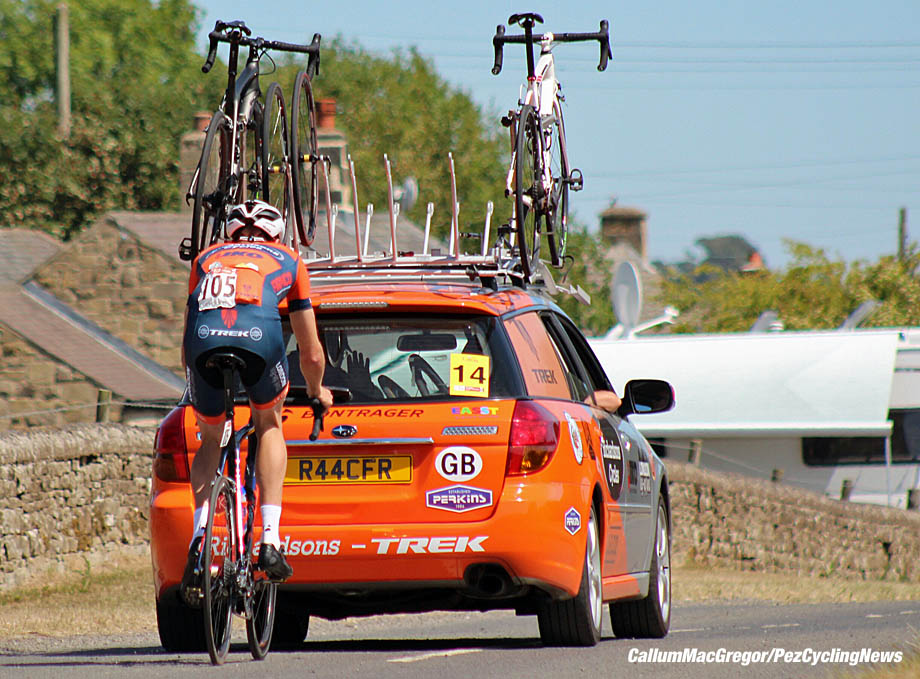 Luke Ryan, Richardsons Trek RT getting back after a spot of bother

Next time round the break was being put under pressure with Owain Doull deciding he would try to thin out the break rather than wait for re-enforcements. Connor Swift was attentive and although the break started to split, everyone got back on but the writing appeared to be on the wall for some. 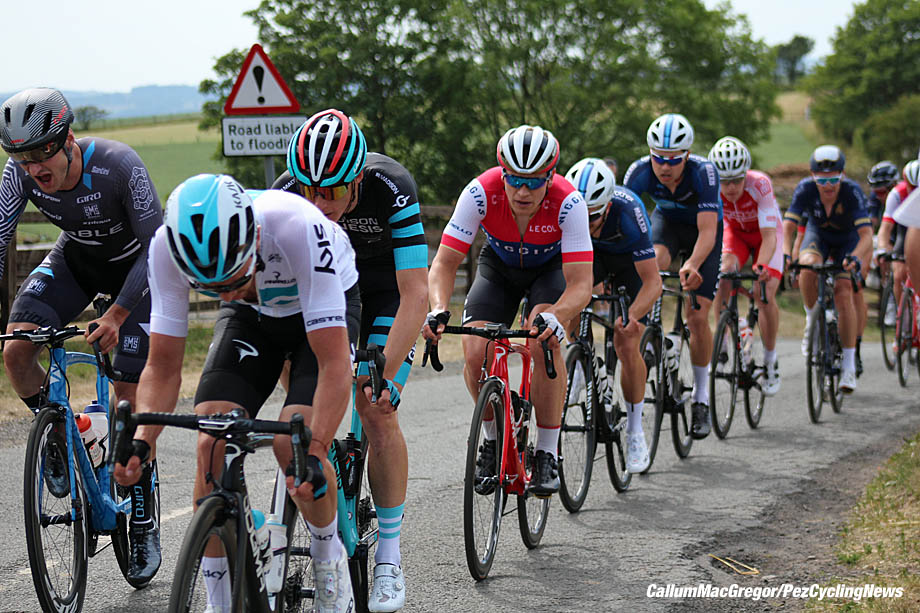 Owain Doull putting the pressure on the break on lap 3 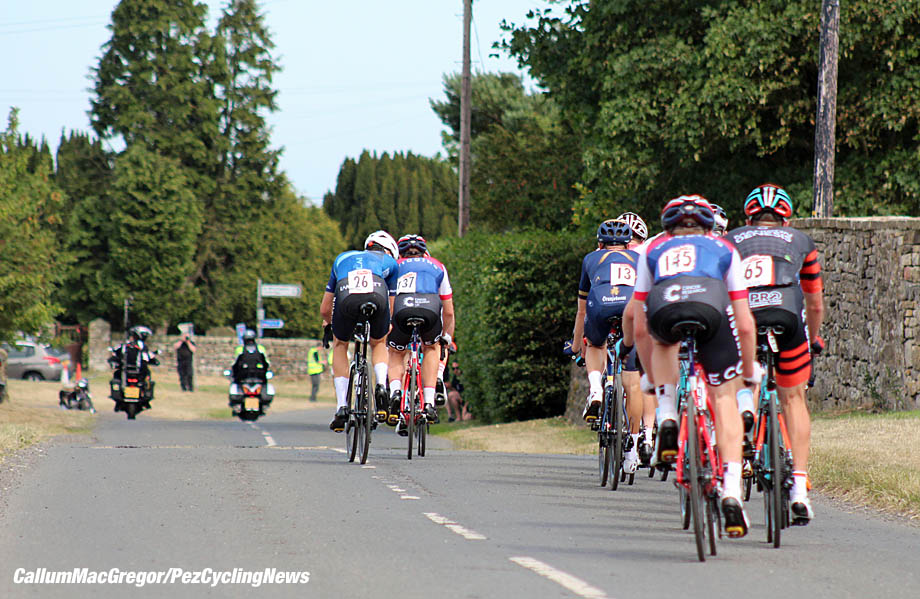 The break under pressure 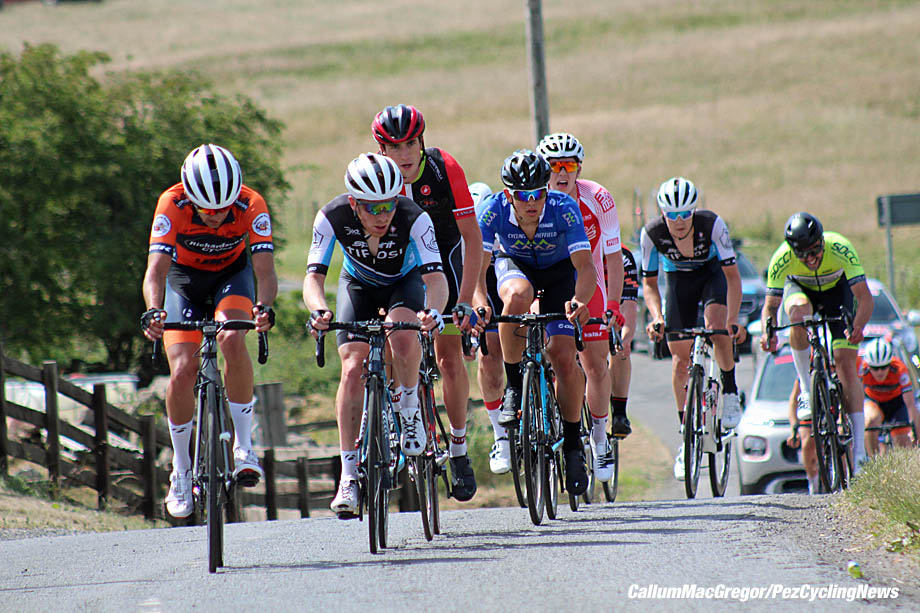 The bunch starts to split

Team Sky having presumably accepted that the team time trial at the front of the bunch was not having the desired effect of closing the gap had started to fall back with very sore legs. Except that is for Ian Stannard, who along with Tom Stewart, JLT Condor and Mark Donovan, Team Wiggins had set off in pursuit of the break. With almost a two minute gap to close it was going to be a tough ask. But with Mark Donovan on great form after fourth in the recent baby Giro, they were giving it a good go and working well, with Stannard as expected having that extra to give. 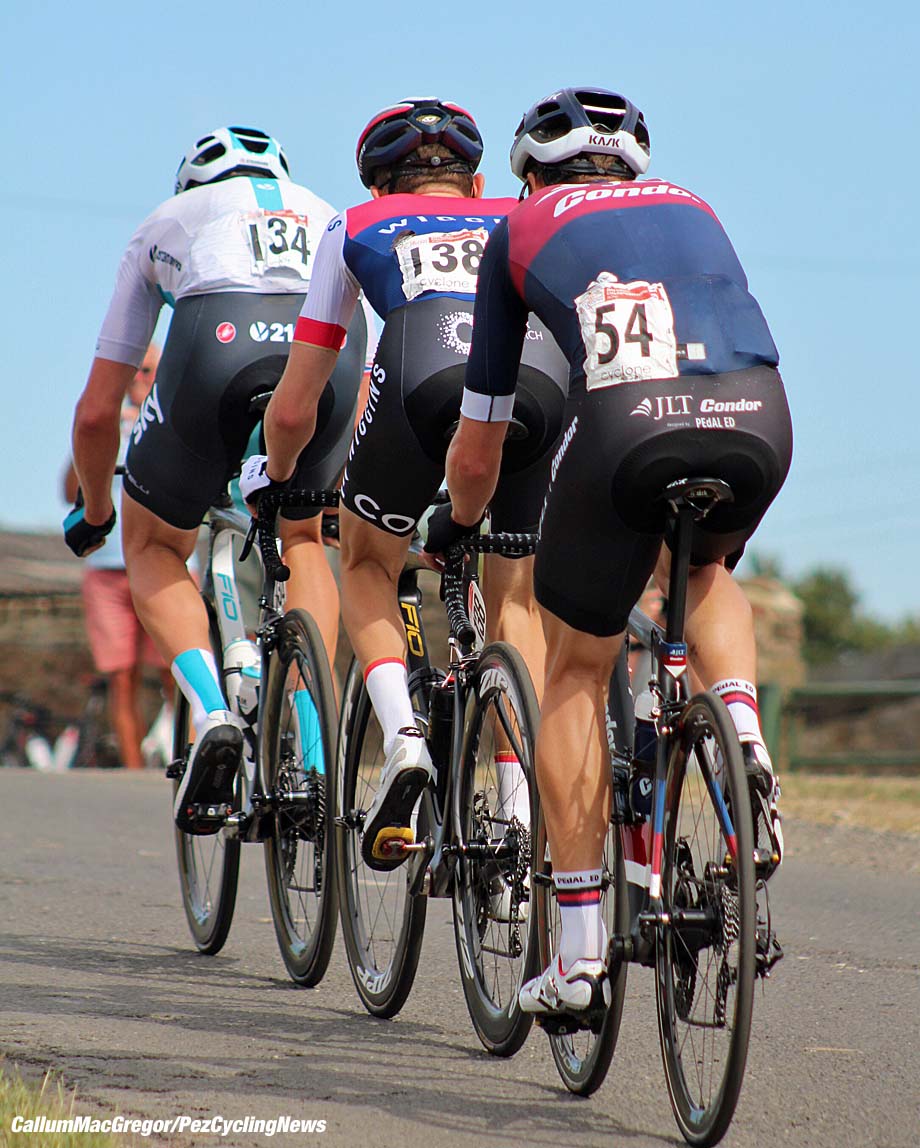 Stannard, Stewart and Donovan give chase

The bunch under sustained pressure had split and group two looked like they were having a little down time before deciding whether they would crank it up again. Group three was looking like day over and conspicuous near the rear was an unhappy looking Mark Cavendish. 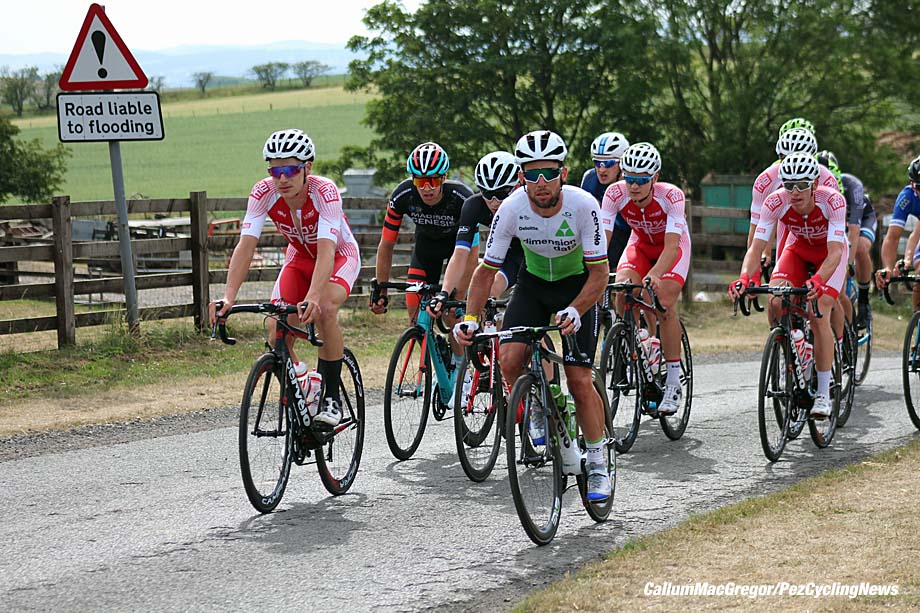 Into the final lap of the large circuit and the break appeared having completed the final climb of the Ryal intact. 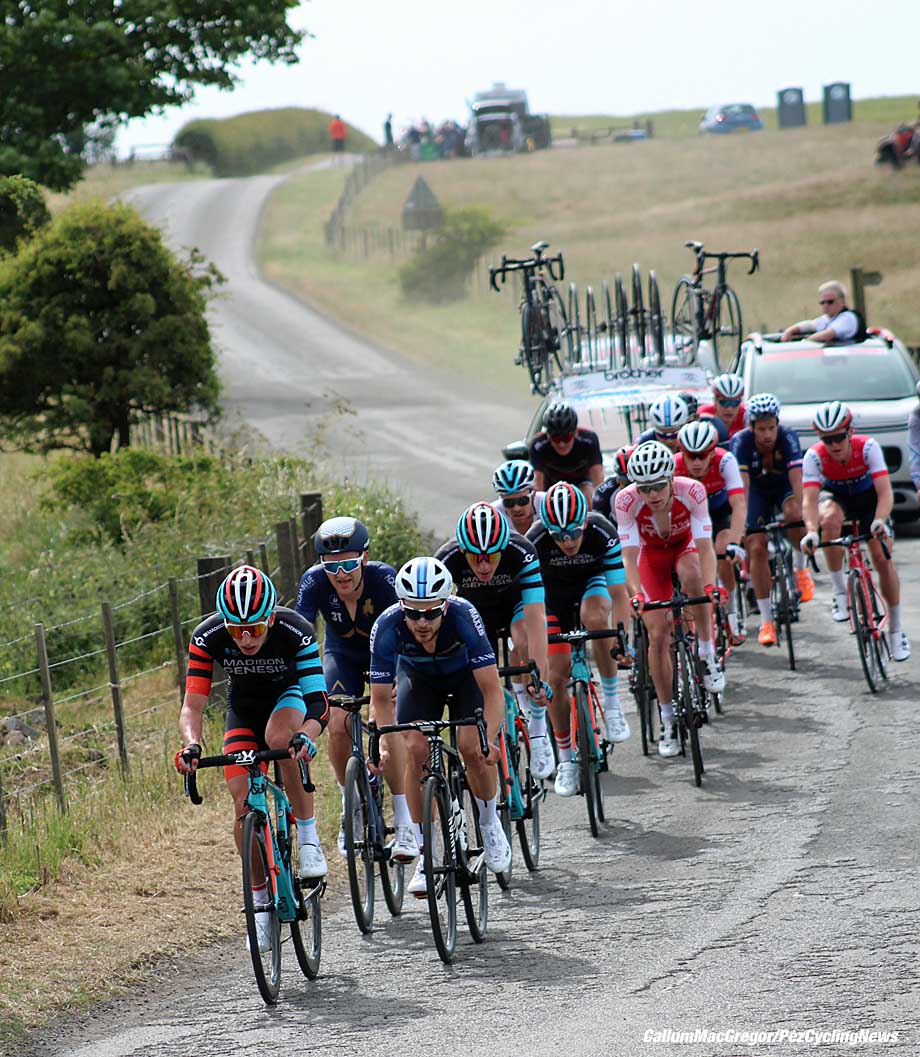 The break intact after the final ascent of the Ryal

Whilst Stannard and his fellow pursuers continued to dig deep in their attempts to bridge, with the gap having reduced to less than a minute, the diminishing bunch was feeling the pressure and there were lots of ones and twos on the road. 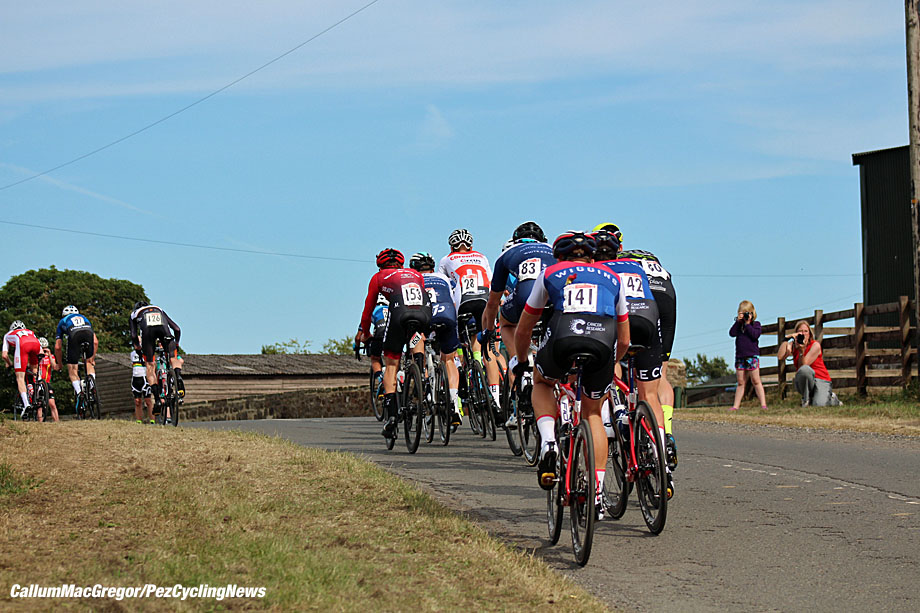 We head for the final circuit and abandon the car upon meeting a closed road. The fireworks have clearly been lit as the break has split with champion to be Connor Swift solo and committed as he passes us with a ten-second gap. The chase group of five comprising Doull, Team Sky and Adam Blythe, Aqua Sport, Fred Wright, 100% Me, Robert Scott, Team Wiggins, Ben Hetherington, Memil CCN looked like they had the firepower to close the gap but would they work together?

Well, they did get to five-seconds but couldn't agree who should close the gap and Swift, tenth in the individual TT on Thursday didn't look back and powered away to a deserved win having been at the front of the race all day. For a man whose career on the bike was almost ended by a horrific crash two years ago this was a remarkable result for someone so young and puts his career firmly back on track
It also vindicated the decision by Madison Genesis to give him a contract, the result going down particularly well with team DS Colin Sturgess. 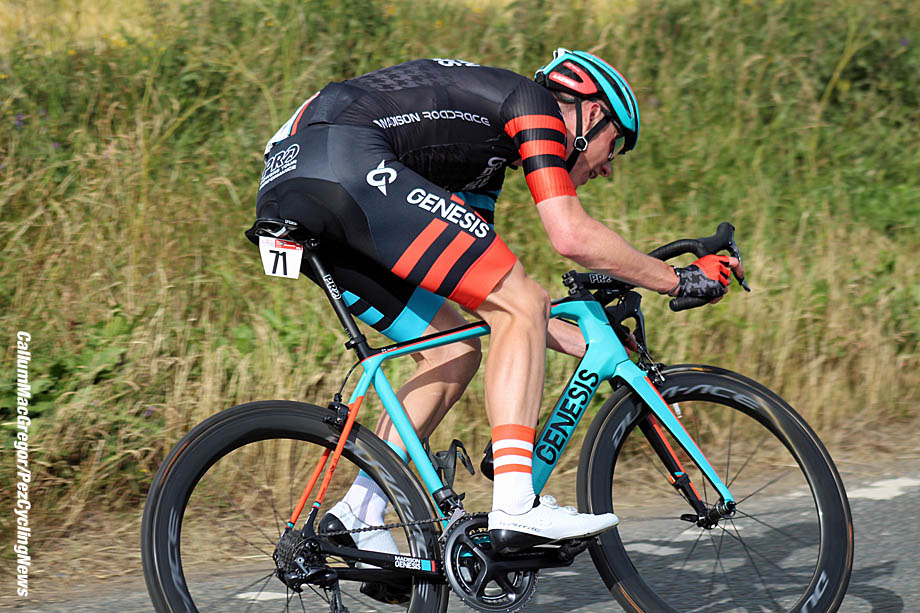 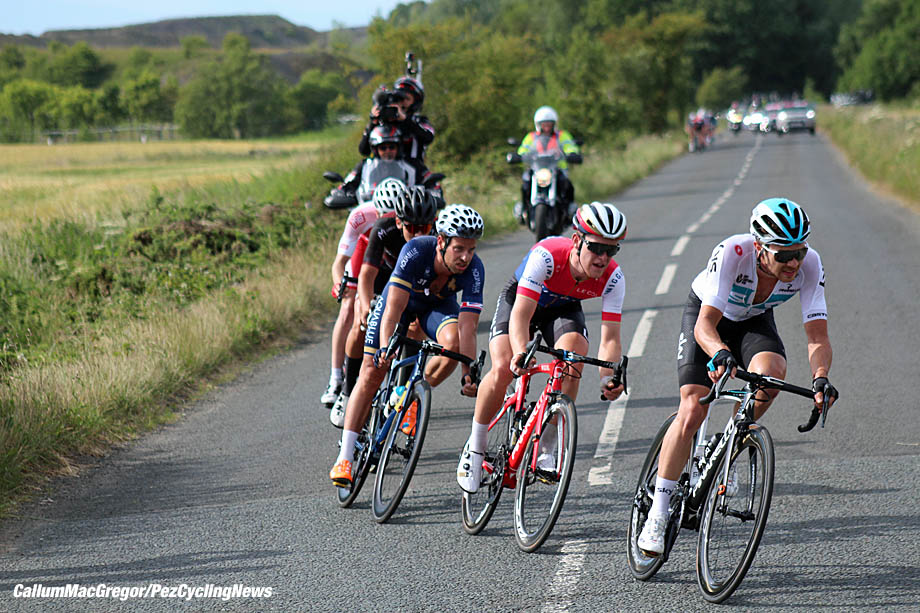 So whilst cousin Ben had to settle for eighth on the day, he was one of the first to con-gratulate his younger relative. So a race full of surprises and a winner who was unlikely to have been high on anyone's list of pre-race favourites, who himself seemed more amazed than anyone that he had won. A great race for Madison Genesis who were prominent throughout and a sign of the times? Perhaps the next generation of home grown starts are here so the established stars should watch out. 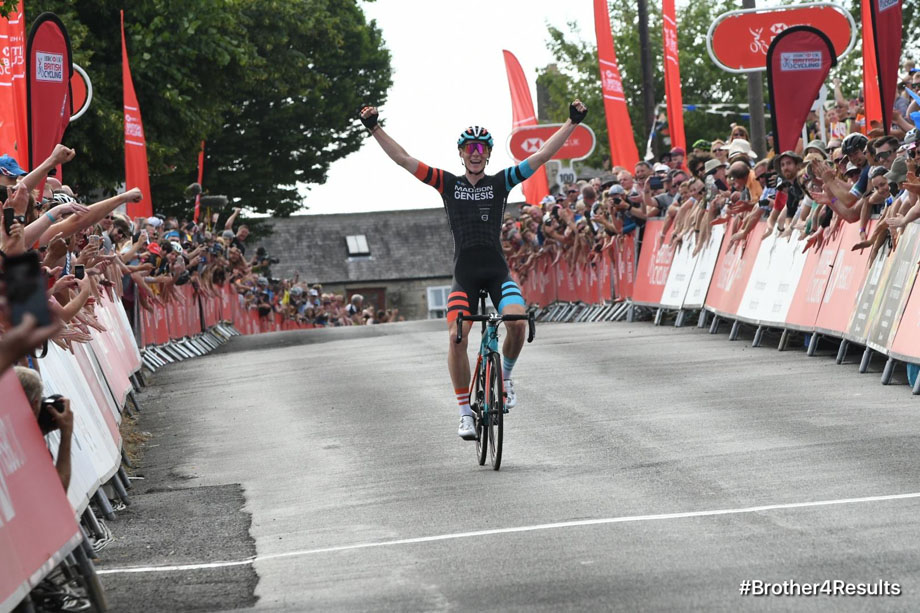