Vuelta Route Preview: On Wednesday the 19th of December 2018, la Vuelta a España route for 2019 was presented in Alicante, PEZ-man Alastair Hamilton was there to take in the announcement as it happened. The stage 1 team time trial starts Vuelta'19 this Saturday, so Alastair looks back at the presentation and gives us his thoughts on the Spanish Grand Tour route.

PEZ rider preview by Ed Hood up on Wednesday. 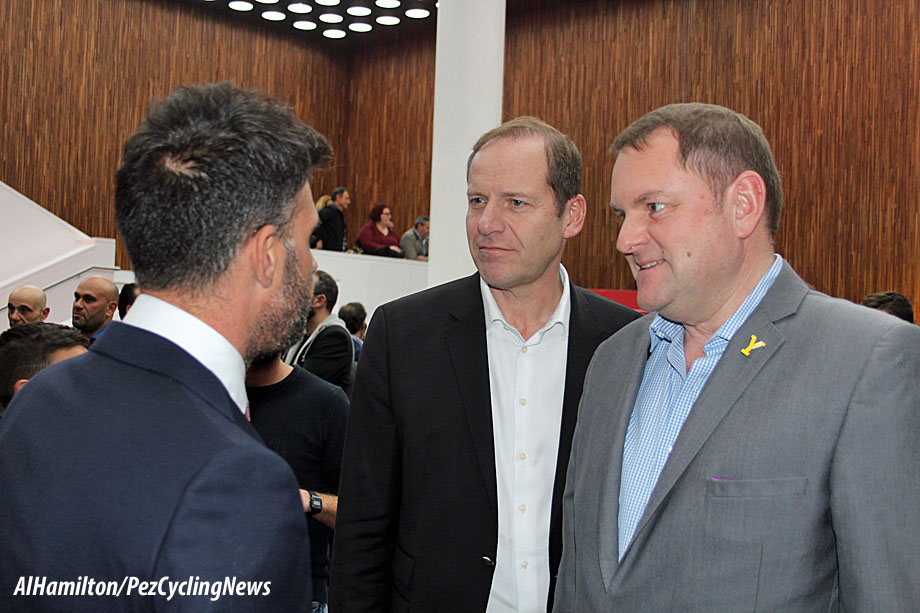 ASO's Christian Prudhomme in discussion with the Tour of Yorkshire's Sir Gary Verity and the Vuelta's Tour winner Óscar Pereiro. Vuelta in Yorkshire?

The evening was a star-studded affair of riders, ex-riders and other dignitaries of the cycling World. Most of the stars of the 2018 Vuelta were there, including the podium top three: Mas, Yates and Lopez. 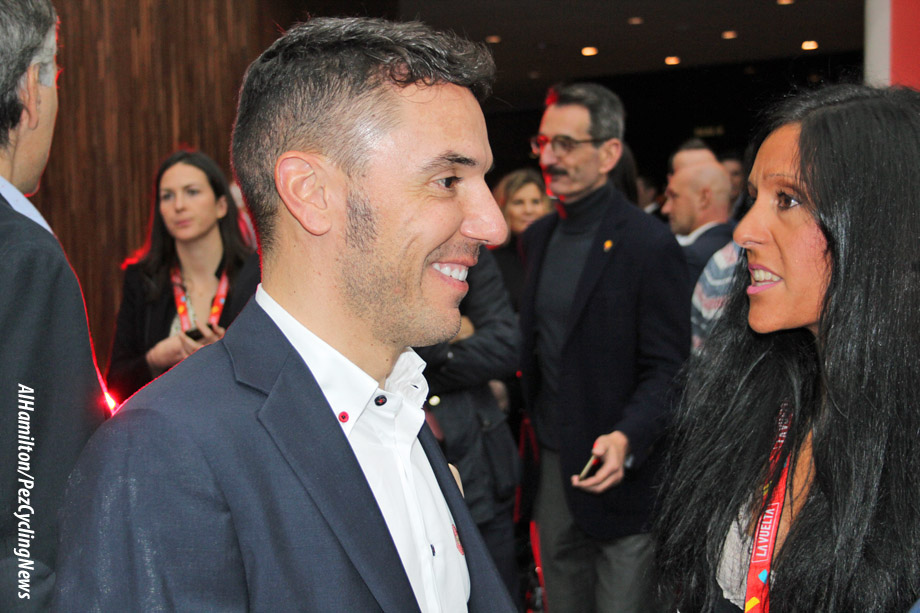 Joaquim Rodríguez had been riding some of the course on his local Andorran roads for TV and would make his appearance on stage to give his opinions. 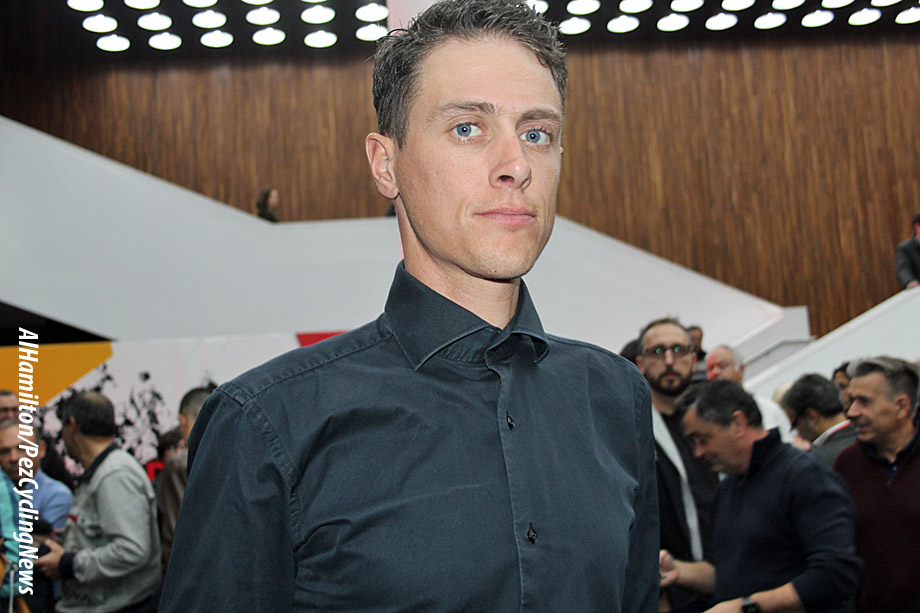 Niki Terpstra made a visit

Dutch hard-man Niki Terpstra was amongst the guests, would he and his Direct Energie team be riding the Vuelta? The team didn't get a 'Wildcard' entry, much like the team car for the official car parking at the venue. 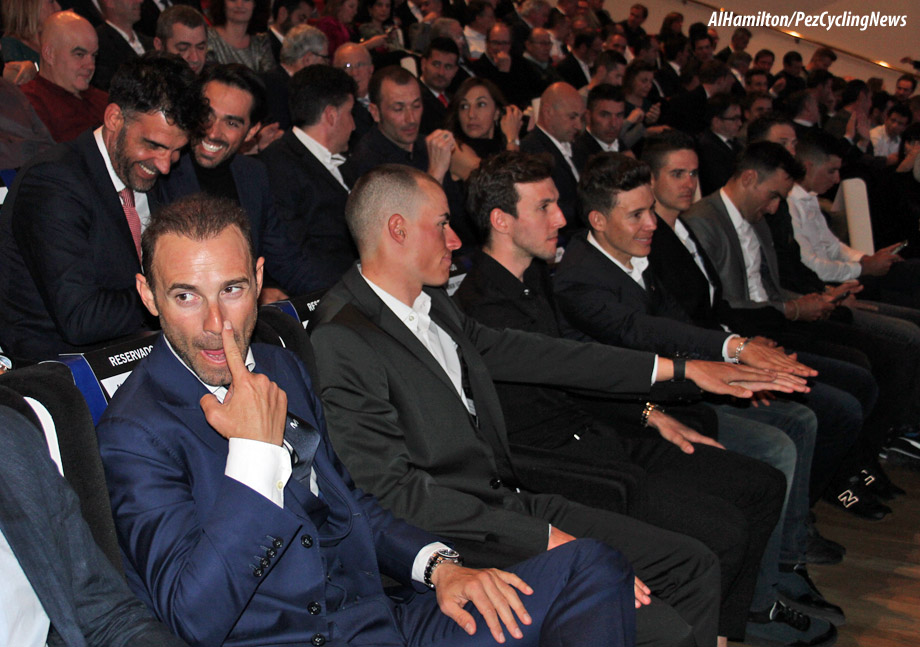 Waiting for the big reveal - Name the stars

2018 winner, Simon Yates was diplomatic about his return to defend his Vuelta title: "It's a long season, I'll ride the Giro and then see," he said. He also rode the Tour de France, so he will not be on the start line in Torrevieja.


Simon Yates has his say about the Vuelta 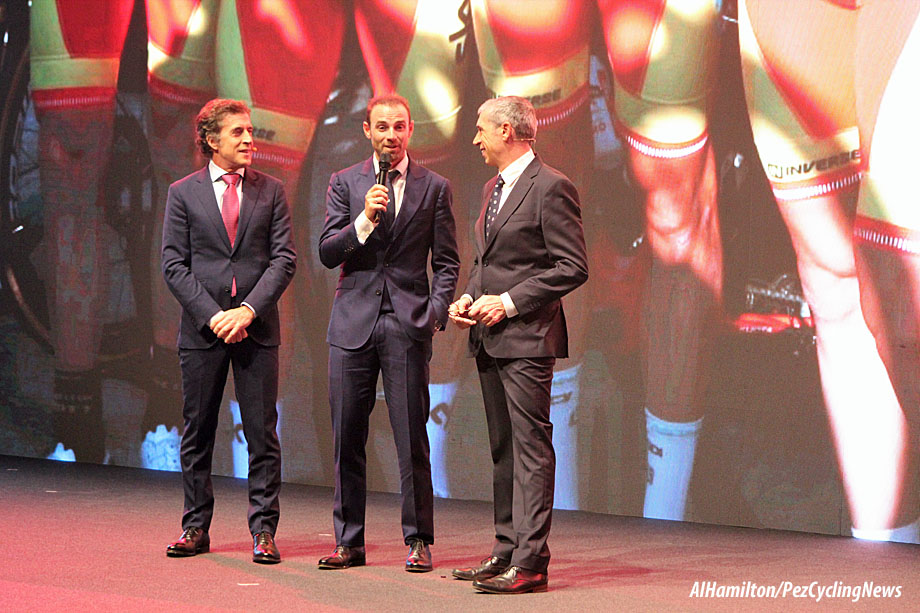 Probably the biggest cheer was for current World champion Alejandro Valverde. The man from Murcia will be on the 2019 Vuelta start line. 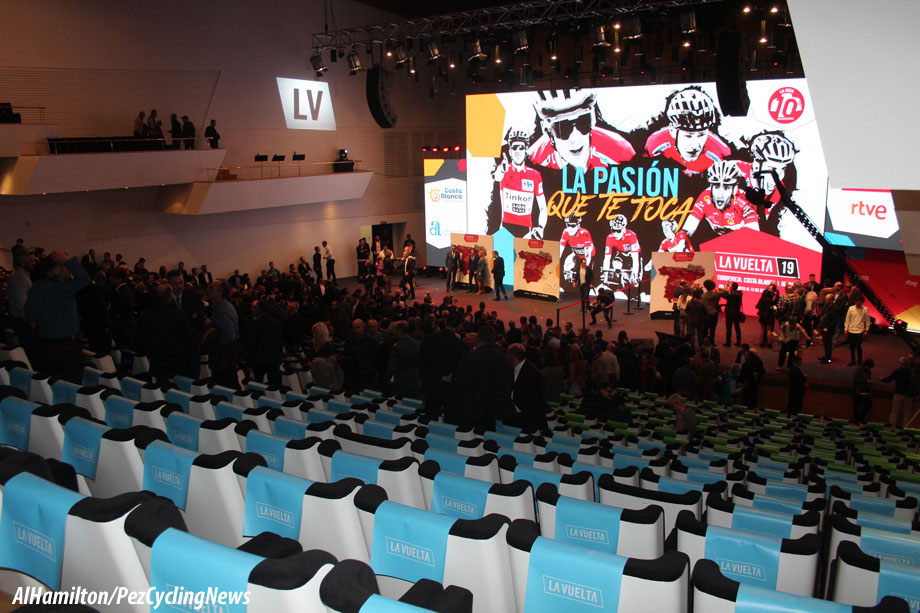 The show over for another year, time for the reception

After the route reveal a buffet was prepared in a restaurant at the coast. No current riders were spotted, but there were many other faces from the past. 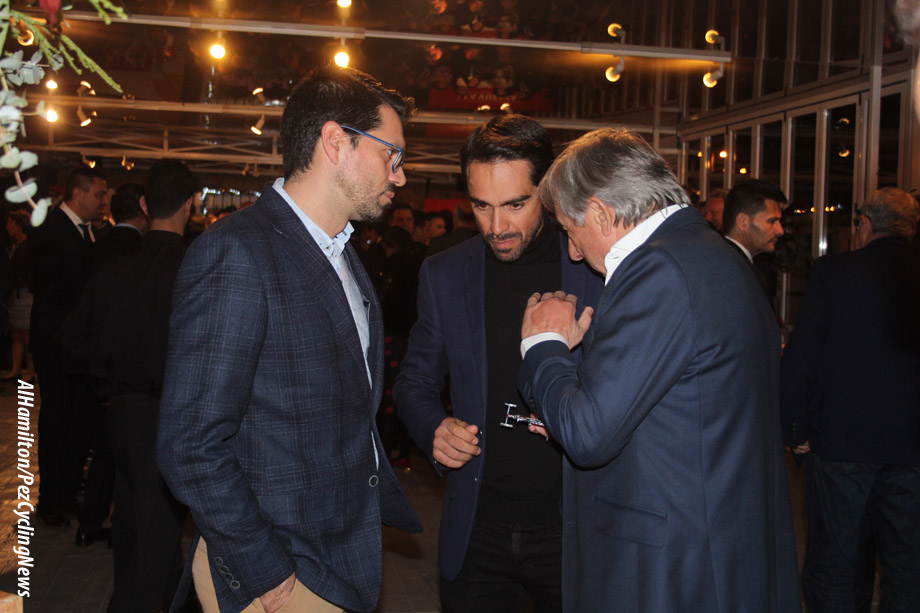 The 2019 Vuelta a España Route
the 2019 route looks to be more balanced than previous editions with more chances for the sprinters, but between the hard climbing days the flat stages are not easy, it will be a tough rider who can win more than one of the 'flat' stages. Only one individual time trial, which should suit riders like Lopez and Quintana. Similar to the Giro d'Italia in resent years, the final week is where the action will sort out the men from the boys, but the first week will cause problems for the unready. As always it's a climbers race that could suit the Colombians, but Roglic and Kruijswijk will be there for the win and the Vuelta usually has some surprises up its sleeve. Roll on August the 24th!

The Stage by Stage Lowdown:
Stage 1: The opening team time trial is on a flat urban circuit around the streets of Torrevieja. A short and fairly straightforward route that shouldn't have much effect on the final overall standings. 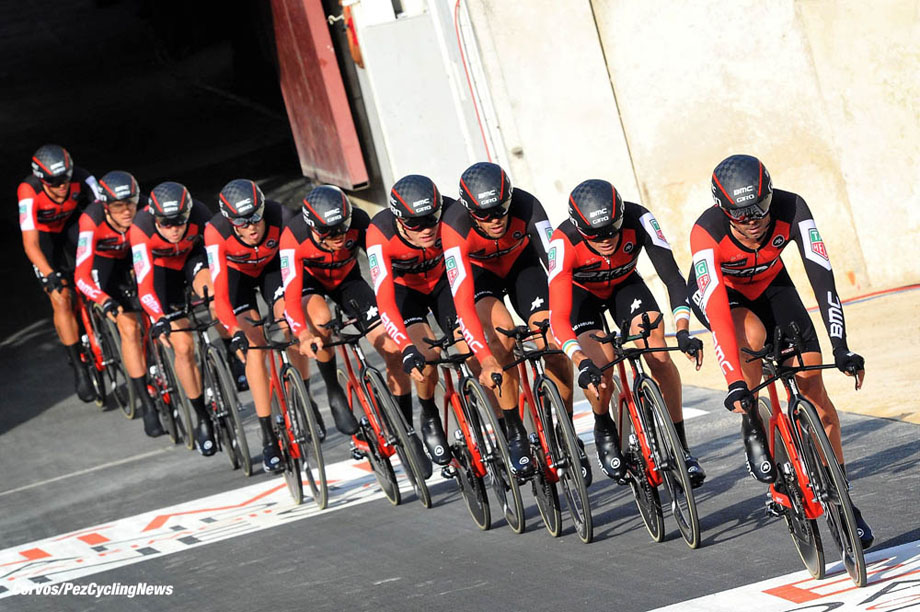 Stage 2: A mid-mountain stage from Benidorm to Calpe the first part of the stage will pass through Alicante’s hinterland, characterized by its winding roads. The finalé involves the climb of the Alto de Puig Llorença (Cumbre del Sol), 24 kilometers from the finish.

Stage 3 and Stage 4: Both fairly flat stages with only Cat 3 climbs to cause any problems. A day for either a successful break or the sprinters. 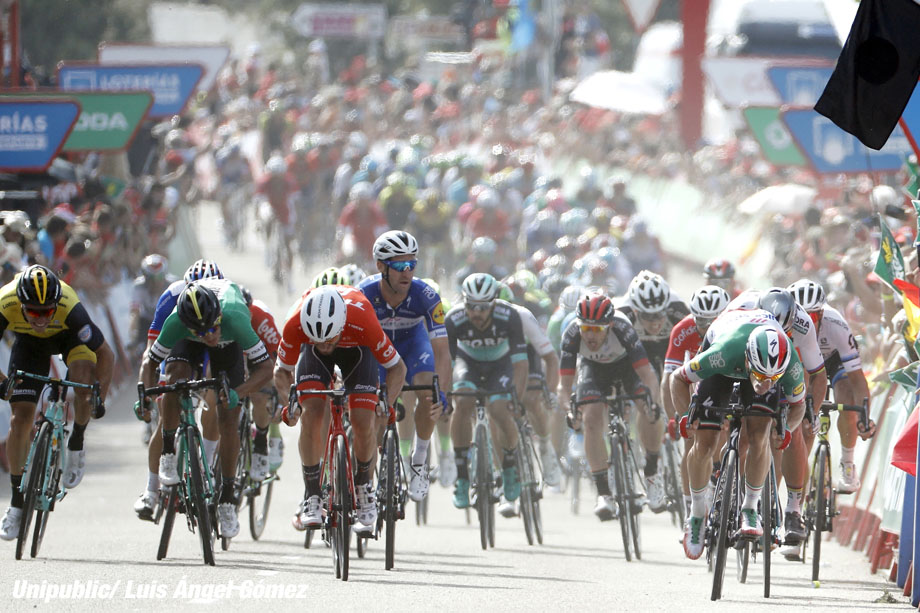 Stage 5: The first stage that should make a difference on the overall. Not a hard stage, but with a summit finish. Not an overly steep climb, but it will have some impact on individual times. Javalambre Astrophysics Observatory is a first for the Vuelta. 2,000 meters altitude, 12 kilometers long with an average incline of 7%. 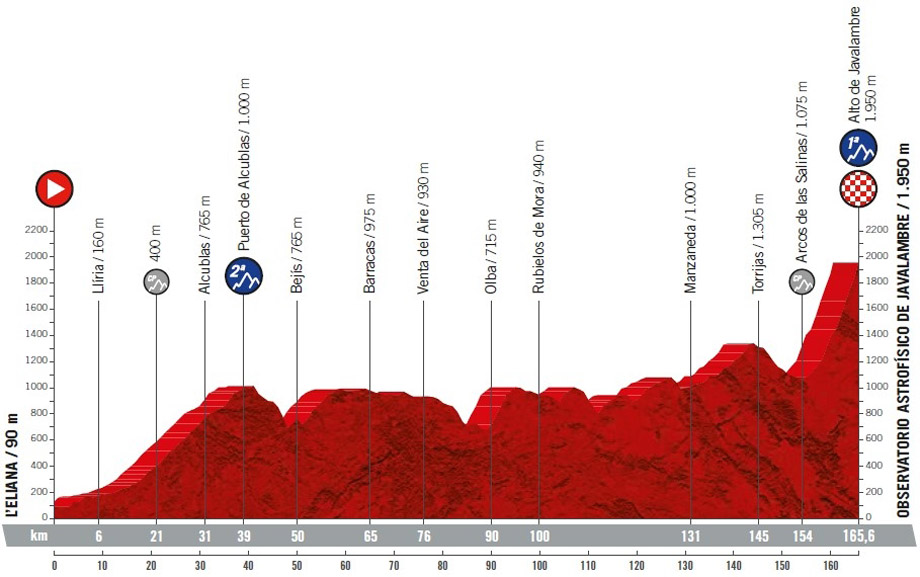 The second longest stage of the 2019 Vuelta, Stage 6 is almost 200 km with another summit finish on the Ares de Maestrat. 5 kilometers long with an average 5-6% slope. Small gains to be made. 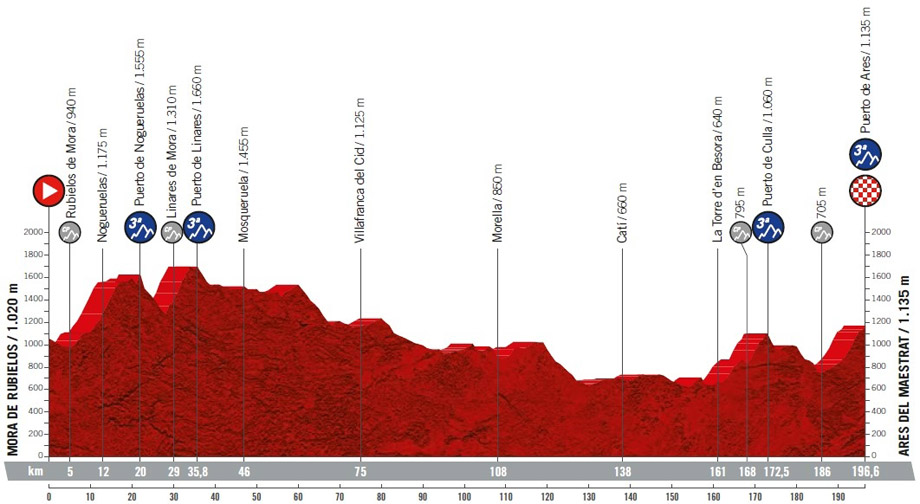 An easy start to Stage 7 with an extremely challenging finish in Mas de la Costa, which will test the overall favorites. A bit early to lose the Vuelta, but it could happen.

Stage 8 from Valls to Igualada. Another day for a break or if the sprinter teams chase after the Puerto de Montserrat, towards the end of the stage, a bunch gallop. 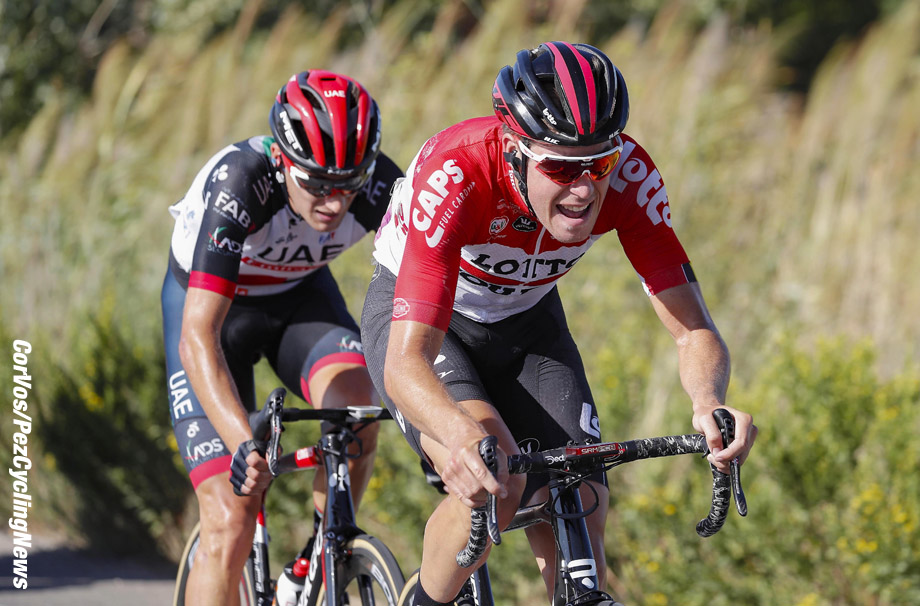 A late break win for Wallys on stage 18 Vuelta'18

Andorra welcomes the Vuelta on Stage 9 with a similar stage to the final act of last year's Vuelta, although this time the climb up to the Coll d’Ordino is in the opposite direction. The hardest part of the Coll de la Gallina and the finish will link La Comella, the first ever appearance of the Engolasters climb, and a new 4 km flat gravel track to the final climb to Cortals d’Encamp. Crucial for the overall. 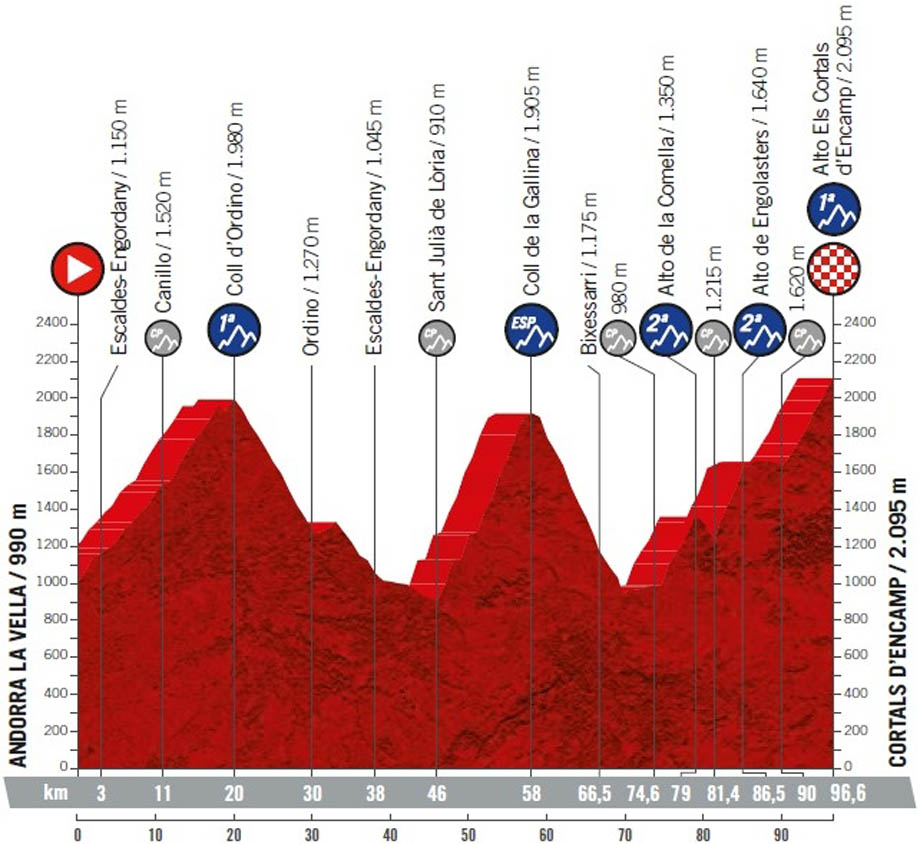 France for the 36.1 kilometer time trial Stage 10. Jurançon to Pau. A winding route with steep slopes that will suit the TT specialist. 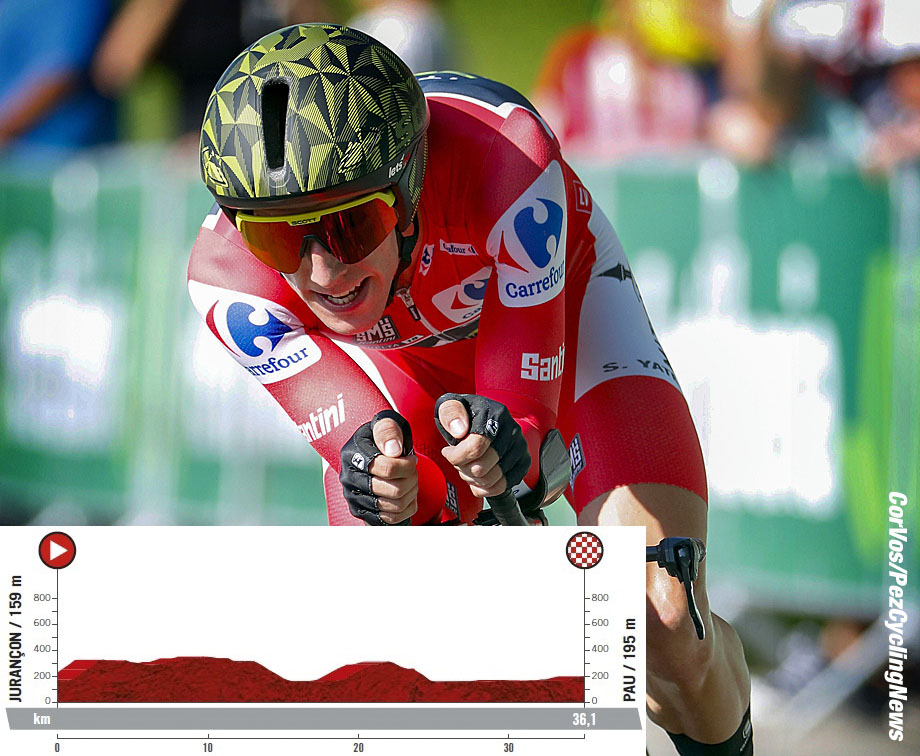 Stage 11 is a mid-mountain stage with a final circuit around Urdax. A transition stage, but one to watch for any surprises.

Stage 12 hits the Basque Country - The heart of Spanish cycling. A string of three Cat 3 climbs: short, steep and very close together, they will bring excitement to a stage finish that is expected to be highly dramatic.

Stage 13 across the North coast, extremely challenging stage with seven mountain passes: four Cat 3 climbs, two Cat 2nd and an HC finalé on the summit of Los Machucos a very demanding finish. This could be the decisive stage of the Vuelta 2019. 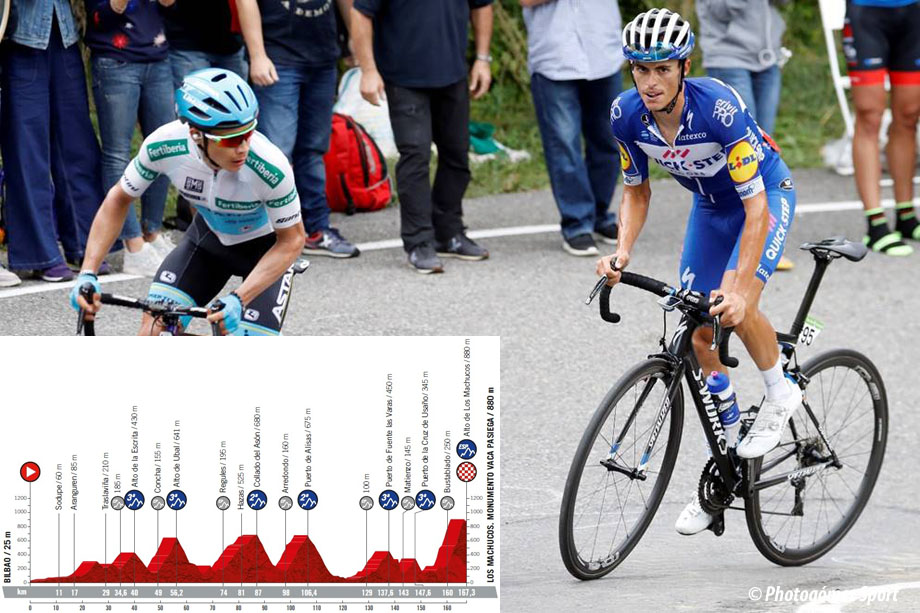 Could be a day for winning a Grand Tour

A flat Stage 14 along Spain’s northern coastline to Gijon. The final climb up to the Alto La Madera will provide the gateway to the finish in Oviedo. A day for the sprinters. 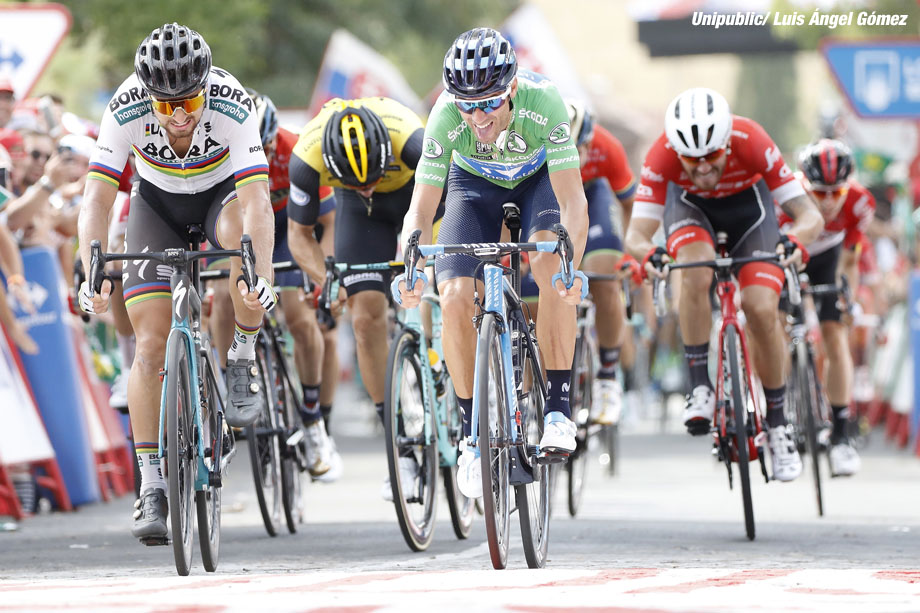 The start of the 2019 finalé and a string of tough stages. Stage 15 has four mountain passes: two Cat 1, one Cat 2 and an HC climb for the finish. The two most famous mountain passes in western Asturias: Puerto del Connio and Puerto del Pozo de las Mujeres Muertas. The final is a very demanding climb that has not featured in the race before. 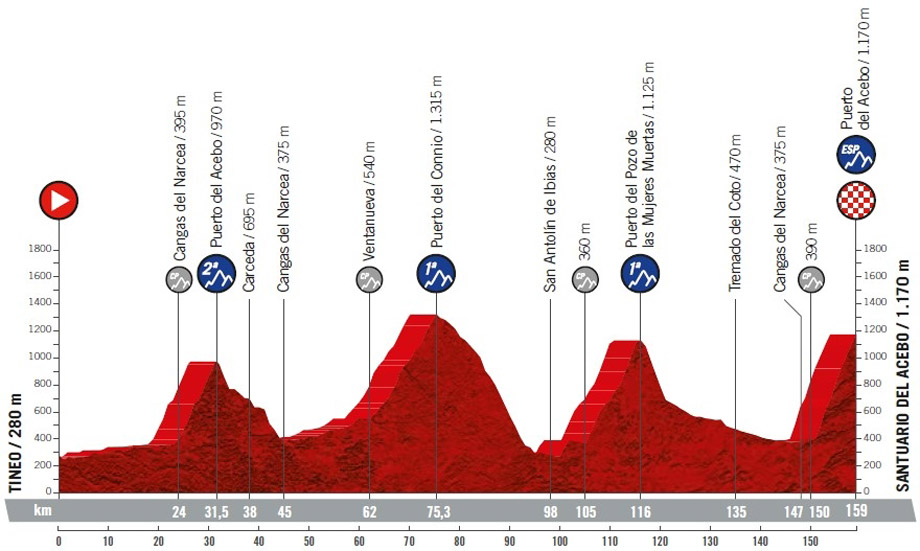 Stage 16 is a mountain stage with five climbs on the route: two Cat 3 and three Cat 1, which all come together toward the end: Puerto del Marabio, La Cobertoria and the top of La Cubilla. The overall winner will be at the head of the action on this stage.

The climb of Cubilla 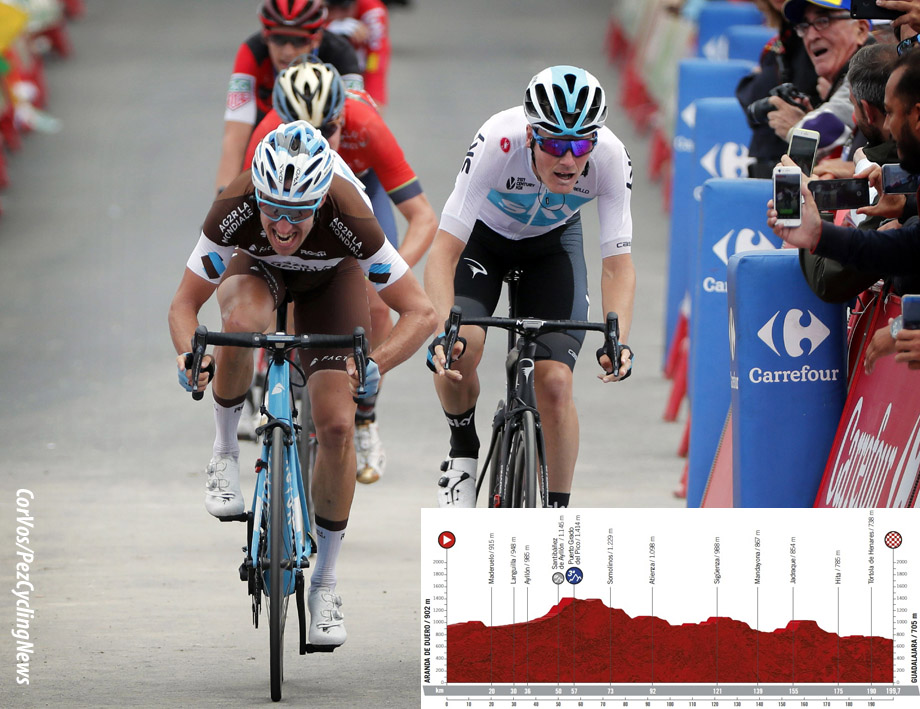 A day a break could sneak off the front

Stage 18 is yet another very hard stage, similar to the one in which Fabio Aru managed to take the overall lead from Tom Dumoulin in la Vuelta'15 with one stage remaining. The climbs include the Navacerrada and La Morcuera from both sides, and Cotos, from where the race descends to the finish in Becerril de la Sierra. 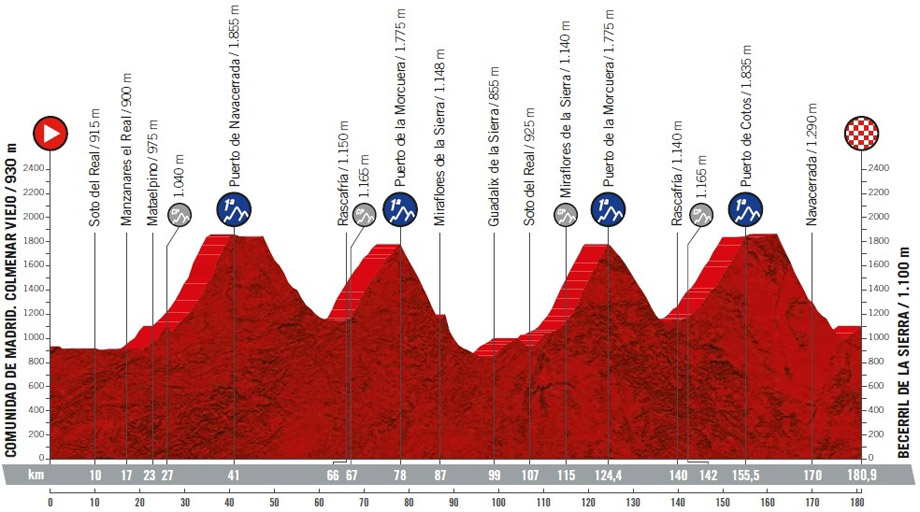 A sprinter's Stage 19 with a sting in the tail. The finish has a surprise with a 1 kilometer climb on the cobblestones of Toledo.

Stage 20 is the last chance for the overall men to battle it out and they have five mountain passes to wage their war. On the climb of the Puerto de Peña Negra (Cat 1) the overall race leader will have to fight to keep his hold on the red jersey. The race could come down to this climb, if anyone has any strength left. 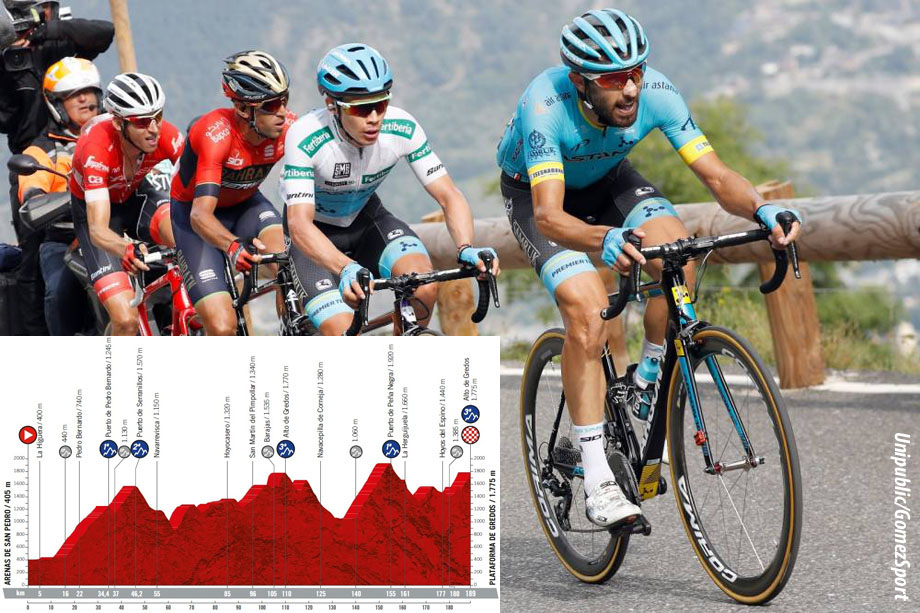 The final Stage 21 in Madrid will follow the usual plan of celebrations and a sprint finish in the Spanish capital. 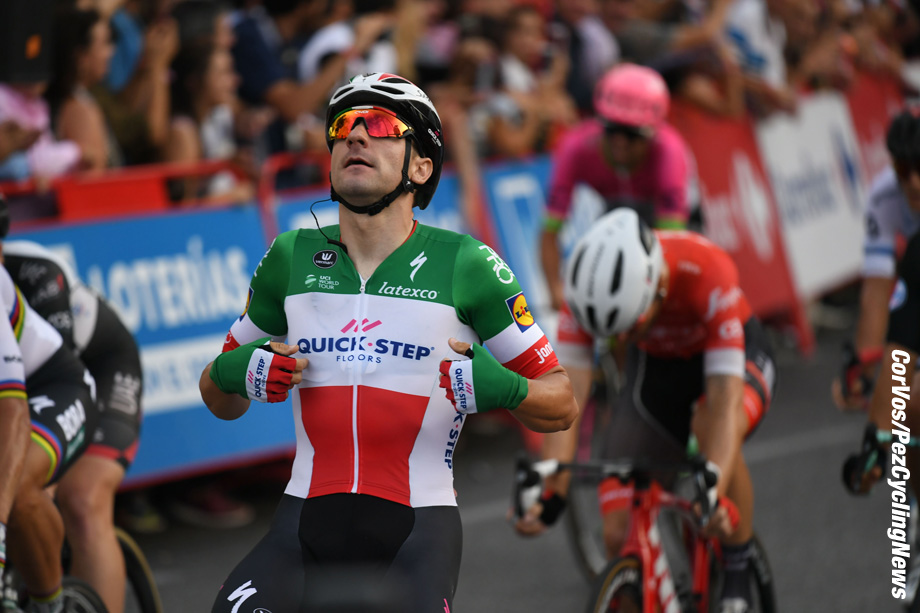 # Rider preview up on Wednesday - For live Vuelta a España action go to SteepHillTV. # 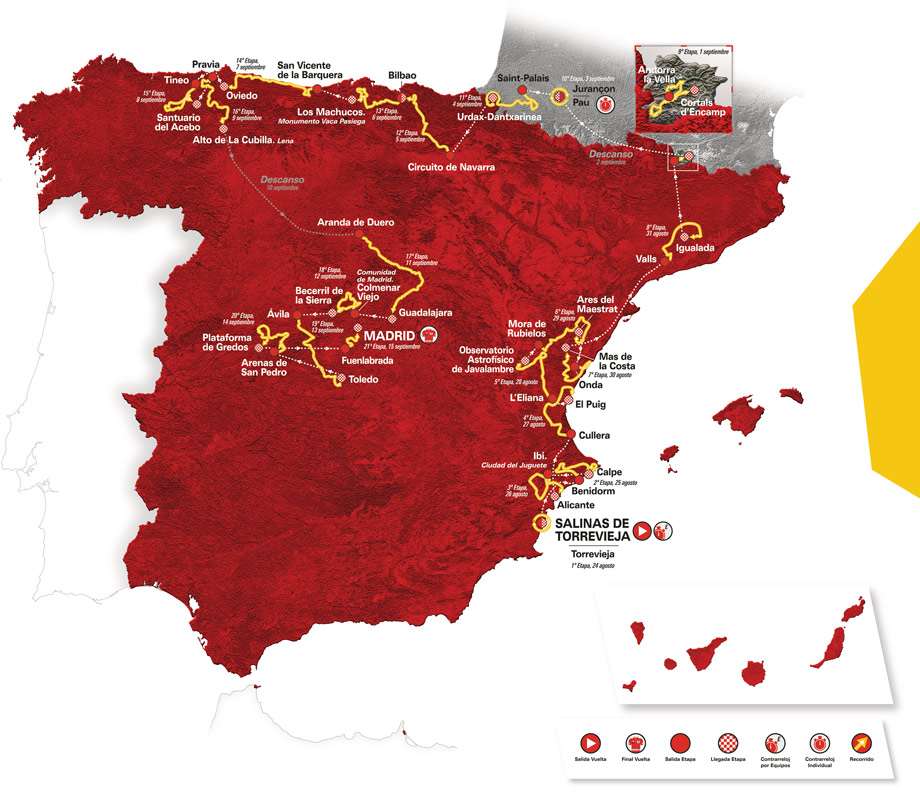