Vuelta Stage Report: Jesús Herrada (Cofidis) won the sixth stage of the Vuelta a España. The Spanish rider was the best on the tough final in Ares del Maestrat, a third category climb. Herrada defeated his escape companion Dylan Teuns (Bahrain-Merida), who was more interested in taking the overall lead. Teuns replaced Astana's Miguel Ángel López in the red jersey. 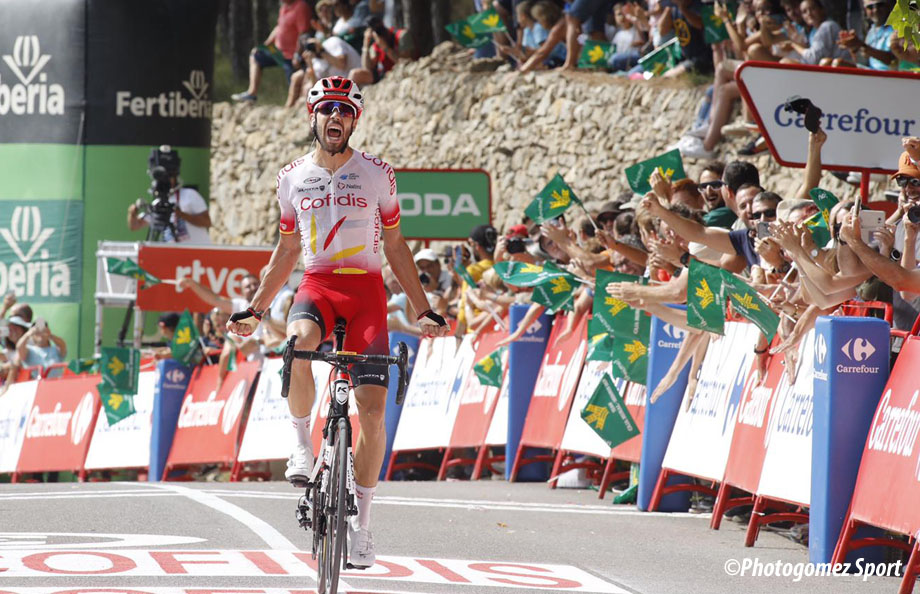 
A long stage, running to almost 200km, in which the first breakaways will be made by potential winners. Finish at the mountain pass of Ares de Maestrat: 5 km with an average 5-6% slope. There should not be any great time differences among the favourites to win the race.

Several attackers tried to get away, but it took a long time before a few riders got any space. On the first climb of the day - the Puerto de Nogueruelas (9 km at 4.5%) - Wout Poels attacked. The Dutchman of Ineos was making a move off the front for the first time in this Vuelta, although we had seen him off the back. Poels was joined by Lawson Craddock and Stéphane Rossetto. 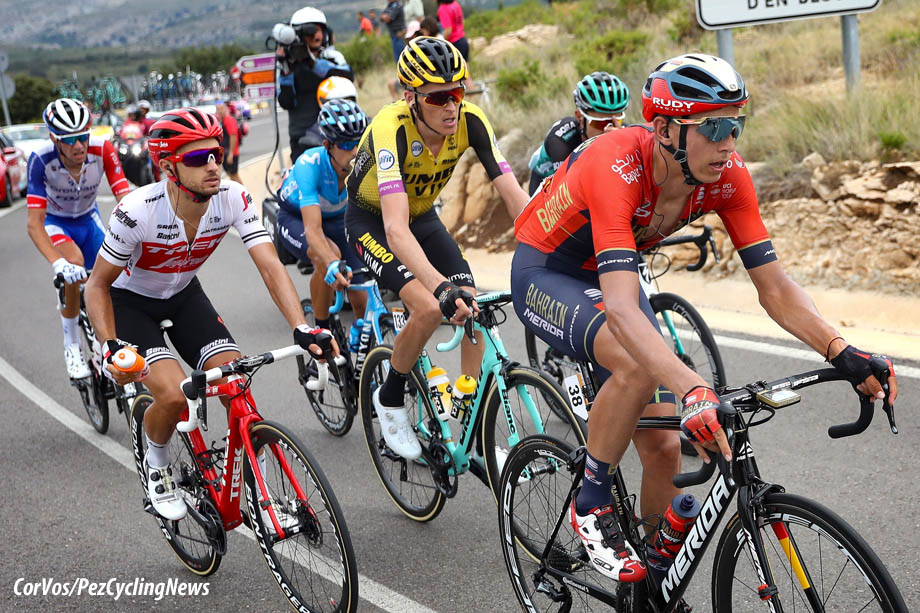 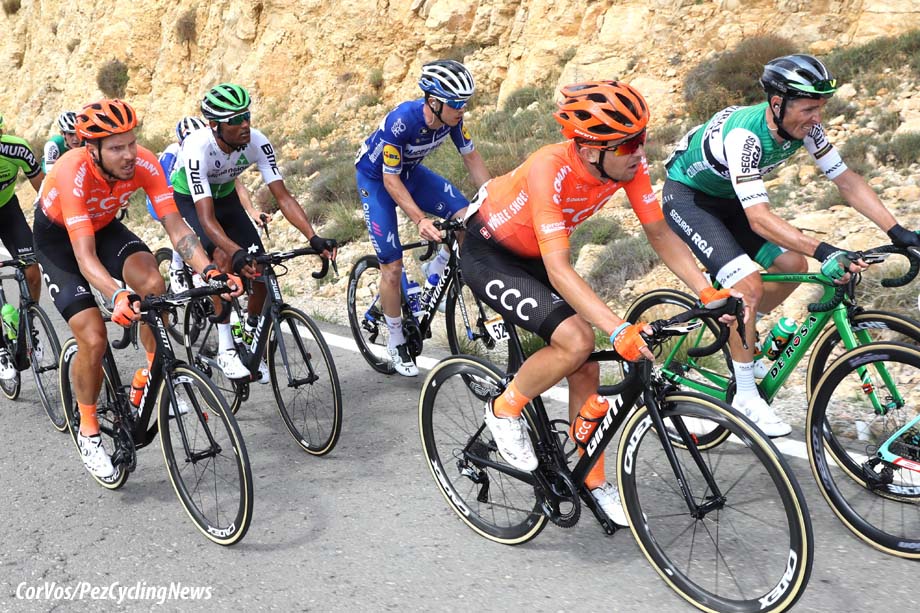 A good day for a break

The peloton didn't give up chasing the leaders, but didn't get any closer. The lead got bigger and it was obvious that this was going to be the 'Break of the Day'. The teams of the classification riders had to keep some pressure on as De la Cruz was 23rd at 4:35 and Teuns was 25th at 4:43 to overall leader, Lopez. 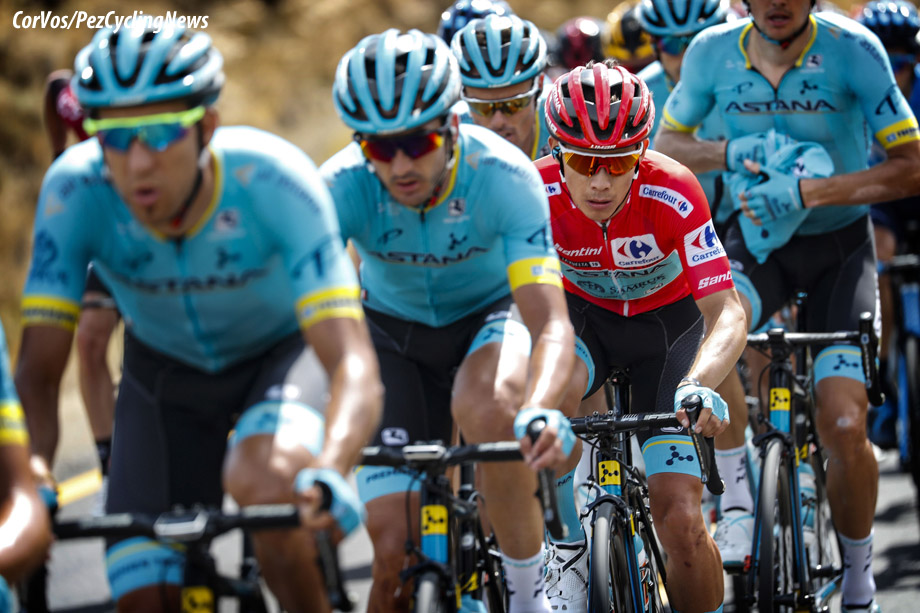 Astana were in control, but didn't mind loosing the overall lead

The break was never allowed more than a 3 minute lead. The pace quite high in the peloton and at 80 kilometres from the finish there was a massive crash. The worts victims were former red jersey wearer Nicolas Roche and Rigoberto Urán, both riders were too injured to continue. 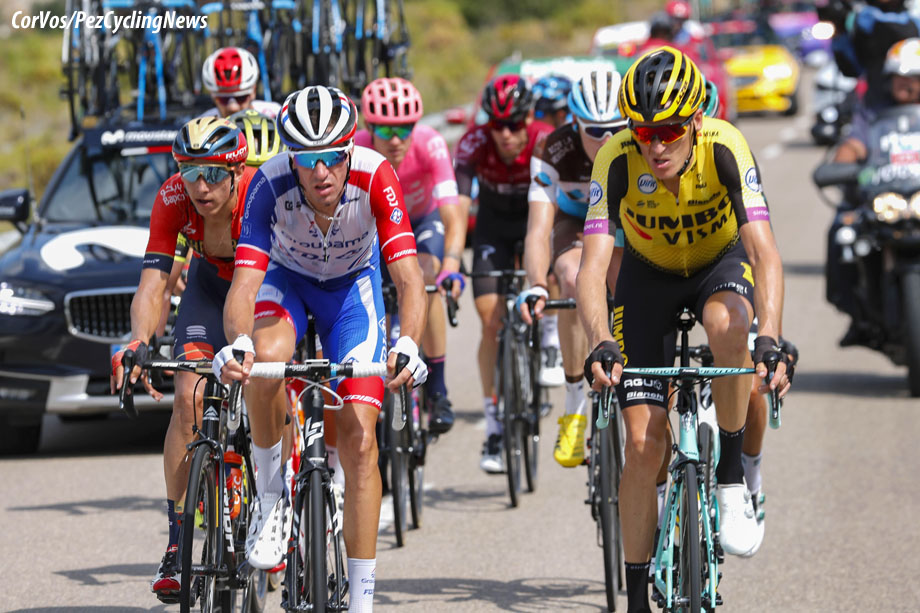 The break wasn't given too much lead

There were more victims; Urán's teammate, Hugh Carthy and Victor de la Parte (CCC) also had to abandon. Tony Martin and Davide Formolo were also in a bad way, but both riders managed to remount, but the Italian champion was on and off the back of the bunch. 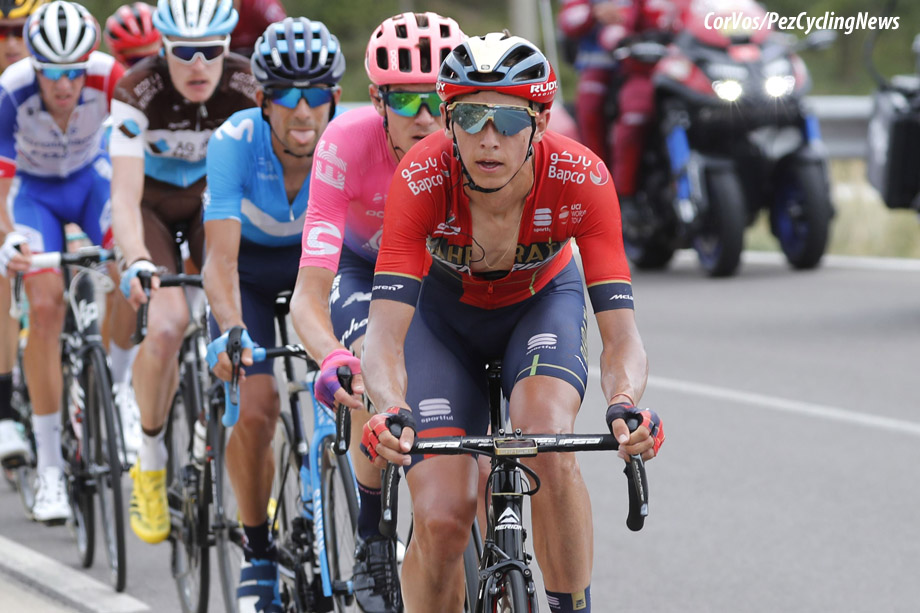 Teuns knew he was in with a chance

Astana continued to push the pace at the head of the pack holding the escape at 3 minutes, although the gap went up again before the start of the Puerto de Culla. Ethiopian climber Grmay attacked from the break. The Mitchelton-Scott rider soon had 40 seconds lead as the others looked at each other. Just before the top Gesink tried to get across, but he wasn't allowed any room. The move by Gesink inspired Van Garderen to counter-attack. However, he took too much of a risk on the descent of the Culla and shot off the road. Another disappointment for EF Education First. 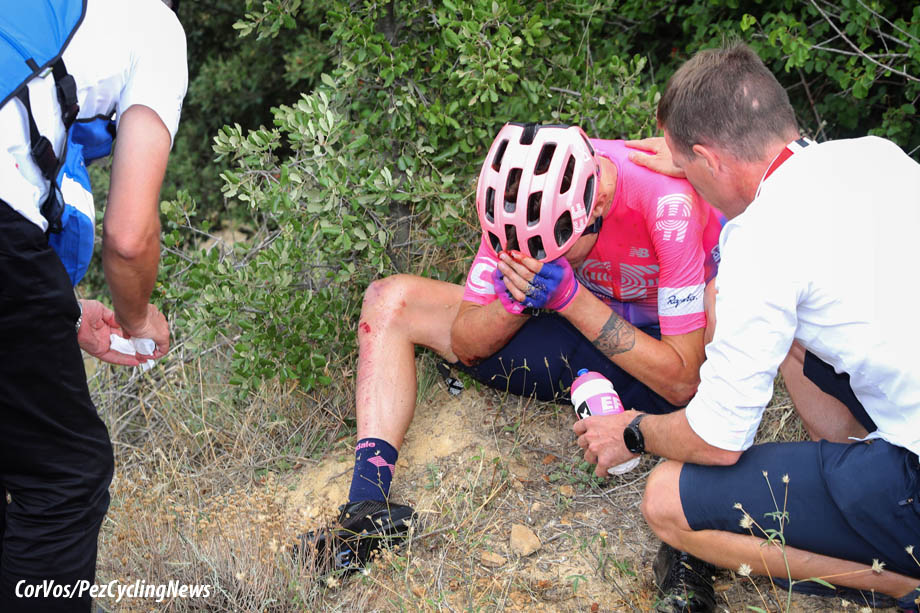 The others in the break continued to chase behind Grmay. The African was holding his lead, but the chase group started working together, and Movistar's Oliveira managed to cross to Grmay. The due started the final climb with a 30 second lead. 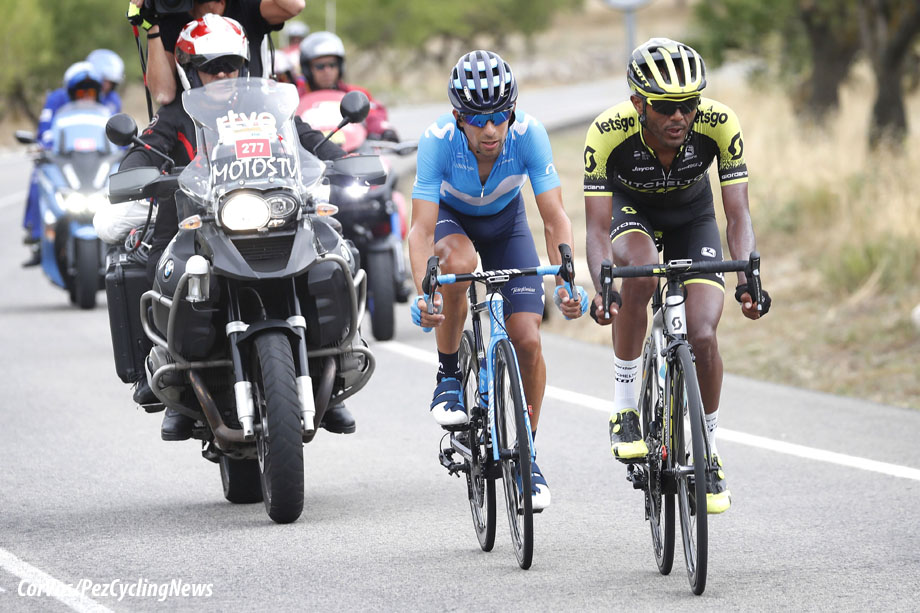 Oliveira and Grmay looked good for the win, but...

On the Ares del Maestrat (7.9km at 5%), Grmay and Oliveira stretched their lead. The other refugees seemed to have left it too late, but Armirail accelerated 4 kilometres from the top. His fellow escapees were immediately on his wheel for Teuns to jump away. The Bahrain-Merida rider managed to catch the two up front with the help of Herrada. 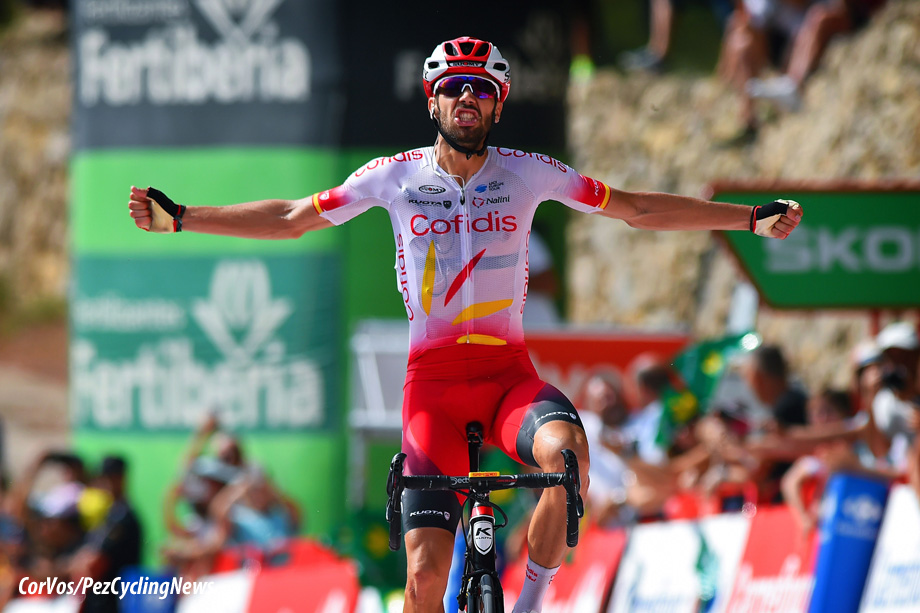 The win for his brother

Teuns and Herrada pushed on past Oliveira and Grmay, to fight out the stage victory. It was Teuns who did the biggest share of the work, as the Belgian was on his way into the red leader's jersey. Herrada was happy with this as he could save himself a bit in the wheel of Teuns. In the final uphill kilometre Herrada could drop Teuns for his first victory in his home Tour. The red jersey group came in 5:44 later to give Teuns the overall lead. 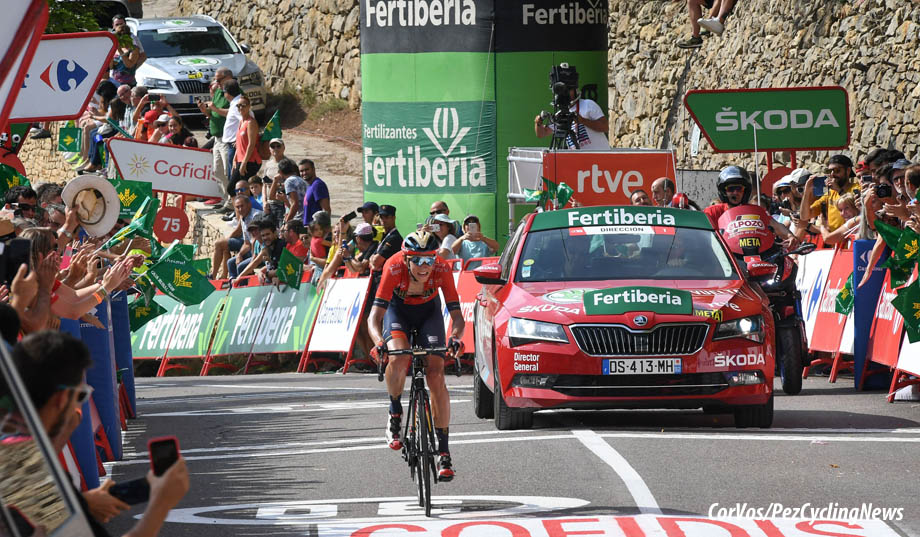 Stage winner, Jesus Herrada (Cofidis): "There is no vengeance, only new opportunities. I was targeting this stage because I know the start and the final climb pretty well. This victory is for my brother, who came close to taking the victory yesterday. It’s also for my family and my partner, who came to the stage; and for the team, obviously. It was hard to get the break going. Halfway through the stage, we didn’t know if we were gonna make it. When Teuns accelerated, I stuck to his wheel and I saved energy for the sprint. And I got the win. To win a stage and to wear the leader’s jersey are both beautiful. But this victory was my goal for the year, to get my first Grand Tour win. And I’ve done on the stage I was targeting! I can go home with peace in my mind but I’ll be looking for more opportunities and they’ll come." 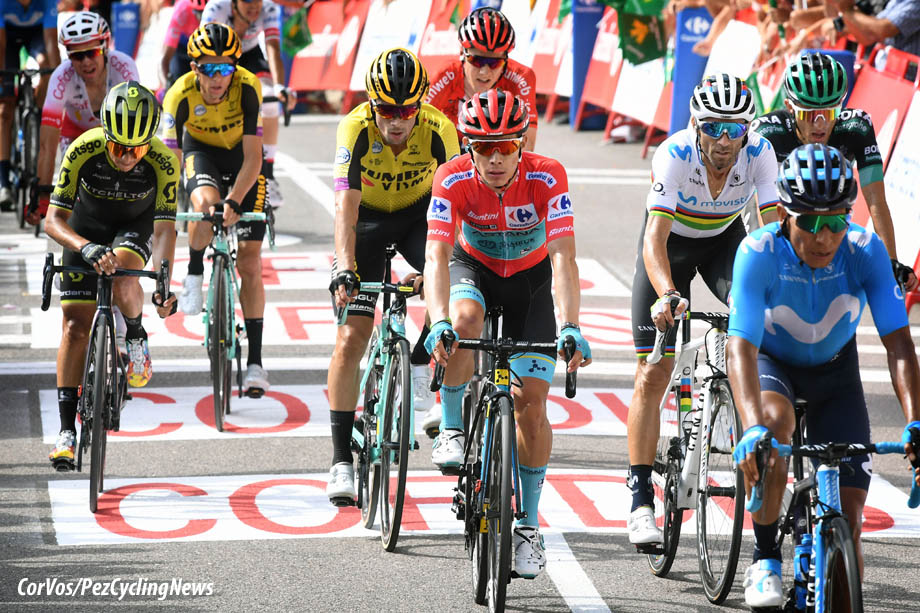 Overall leader, Dylan Teuns (Bahrain-Merida): "I already had the red jersey on my mind before I came to La Vuelta. Today I raced for the stage and in the final climb I went all in with 4km to go. It would have been nicer to also win the stage but I’m happy with La Roja. I was unlucky that one guy was strong enough to follow me, and then I didn’t have the legs to sprint in the last 300m. We have to see how I can defend the jersey. Tomorrow we have a pretty hard and steep final climb. I saw yesterday the GC riders are really strong. I’m a little bit of everything. I love the classics but I also like one-week stage races. And in the Grand Tours, I like to go for opportunities like I did today. To win a stage in a Grand Tour and now to wear the leader jersey, I had never done it so I feel like I’m still improving." 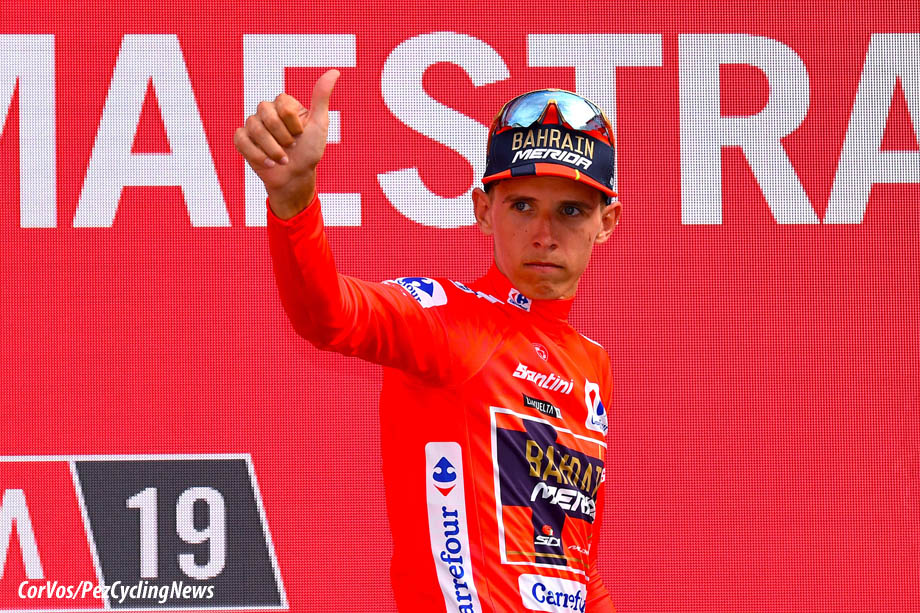