Vuelta Stage Report: King of the Mountains, Ángel Madrazo (Burgos-BH) won stage 5 of the Vuelta a España to the Observatorio Astrofísico de Javalambre. He rode away from teammate Jetse Bol and José Herrada (Cofidis) - the stage long break. Miguel Ángel López (Astana) took over the red leader's jersey from Nicolas Roche (Sunweb), who crossed the finish line a minute and a half after the Colombian. 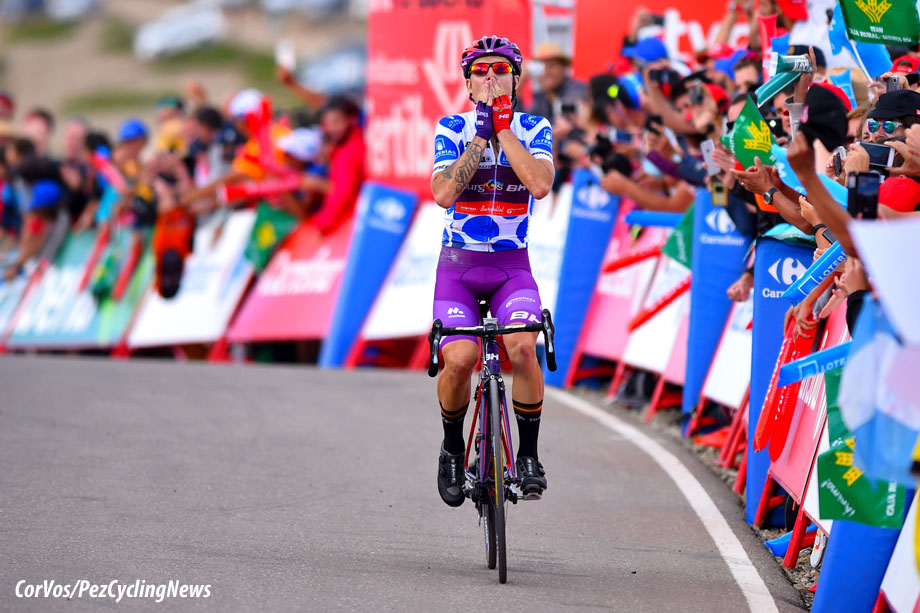 
This is a stage that will begin to separate the men from the boys. The race will pass along winding roads that will take its toll on the peloton before the final climb. It is not an overly steep climb, but it will have some impact on individual times as it features in the race for the first time, promising to be very exciting. 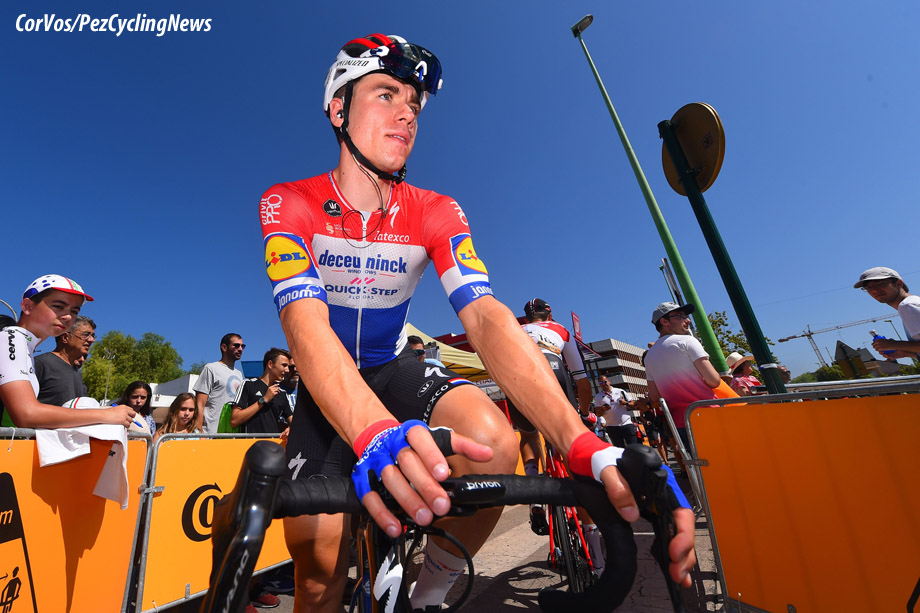 After two sprint stages in which Sam Bennett and Fabio Jakobsen took their victories, it was up to the climbers on stage 5. The finish line was on the Alto de Javalambre at an altitude of 1950 metres. This is the first time the climb has been used in the Vuelta a España and was expected to make a serious difference in the overall rankings. The first kilometres are relatively easy, but after 3 kilometres the percentages go into double figures and remains steep to the line. 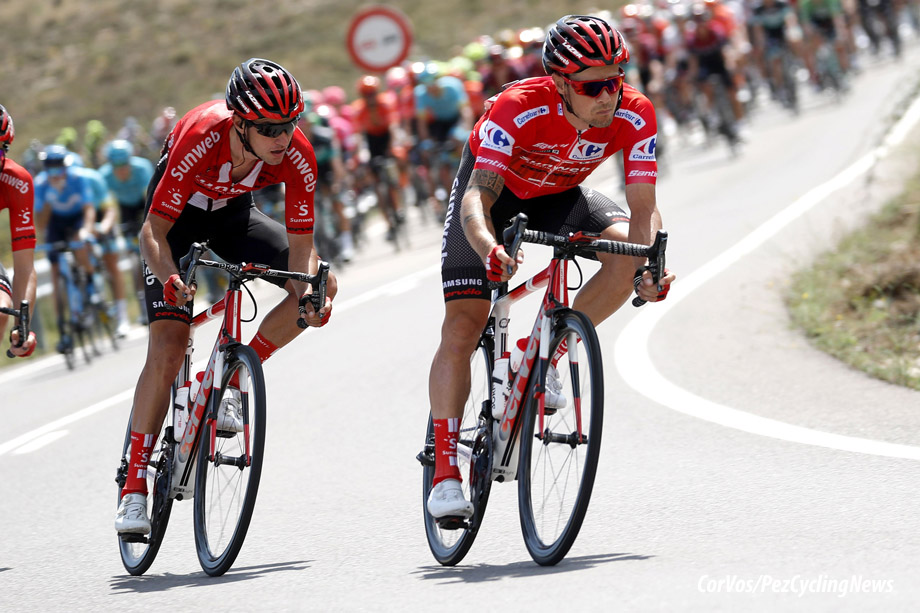 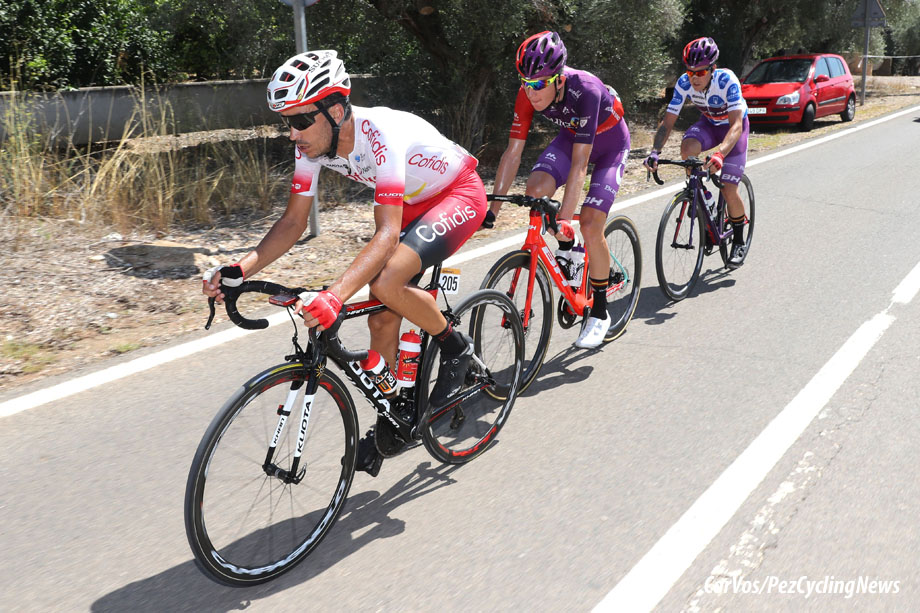 The break of the day - That man Madrazo again

From the start attempts were made to launch an escape, but it took until after the first 10 kilometres for a few riders to gain sort of gap on the peloton. Burgos-BH teammates Jetse Bol and Ángel Madrazo (KOM), joined forces and were joined by José Herrada (Cofidis). Herrada became the virtual overall leader as the gap on Nicolas Roche went to 13:21. 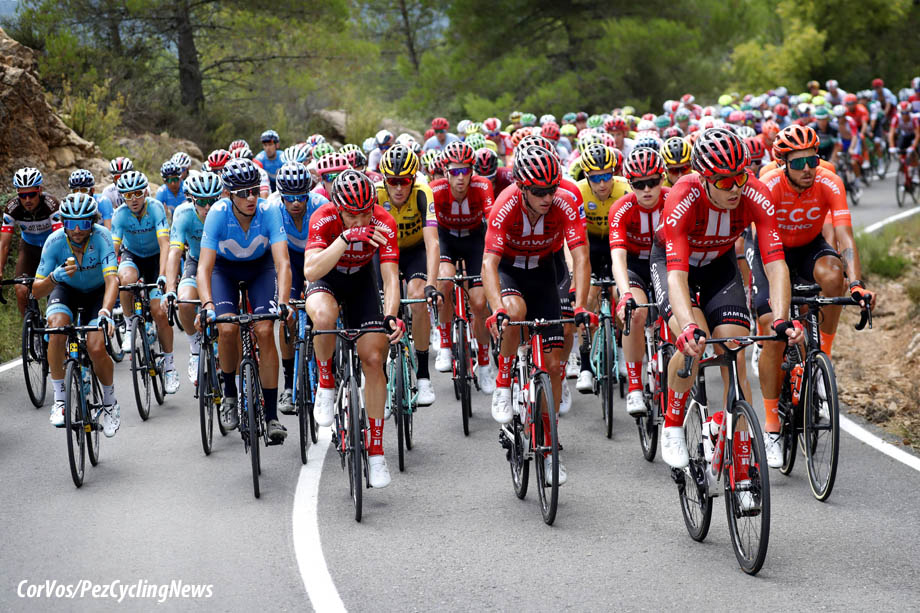 Sunweb were in control at first 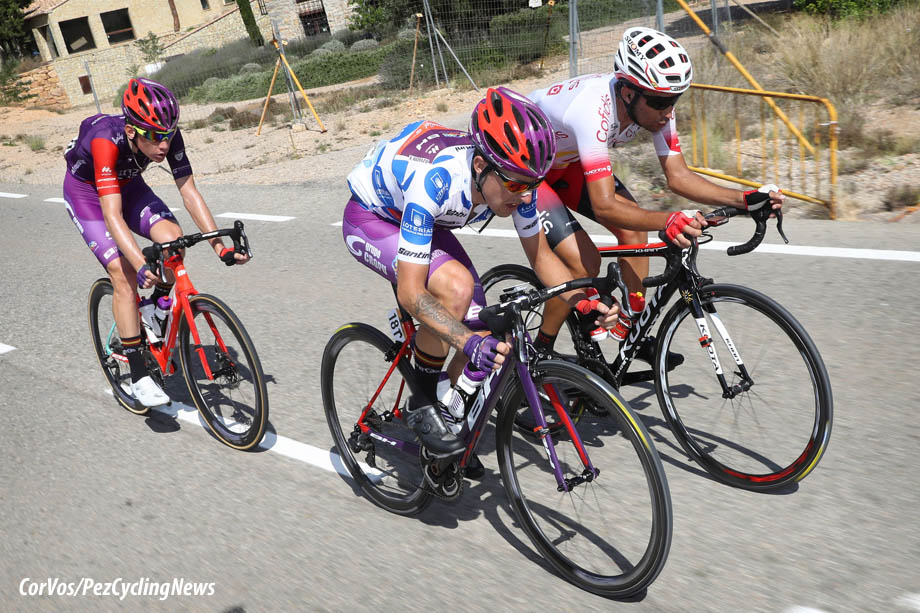 Burgos-BH must have had a plan

On the Puerto de Alcublas - the first climb on the route after 32 kilometres - Madrazo was the first to the top and took the 5 points for the KOM classification. Along with Bol and Herrada he still had more than 7 minutes on the peloton, where Sunweb set the pace. After 45 kilometres the lead went back out to 10 minute. From then on it fluctuated between 8 and 10 minutes. 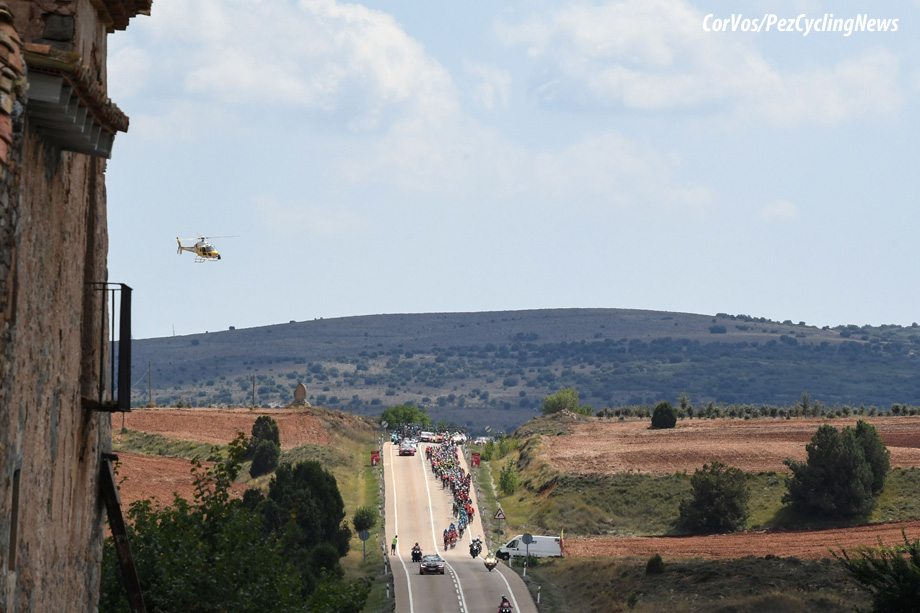 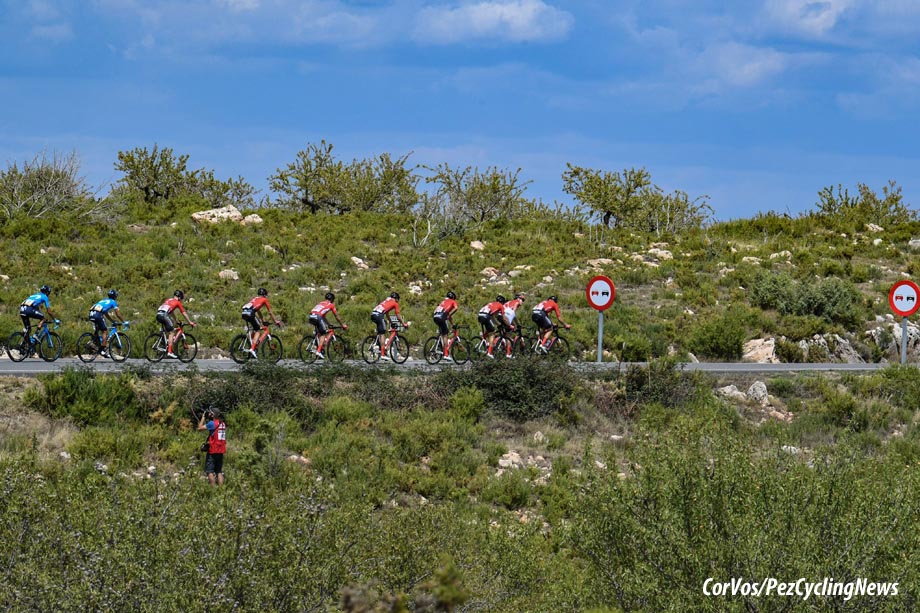 80 kilometres from the finish line there was a crash in the peloton involving Kilian Frankiny and Rémi Cavagna, but everyone was able to ride on. On the Alto de Fuente de Rubielos, Madrazo once again took the 3 points with still 10 minutes advantage. 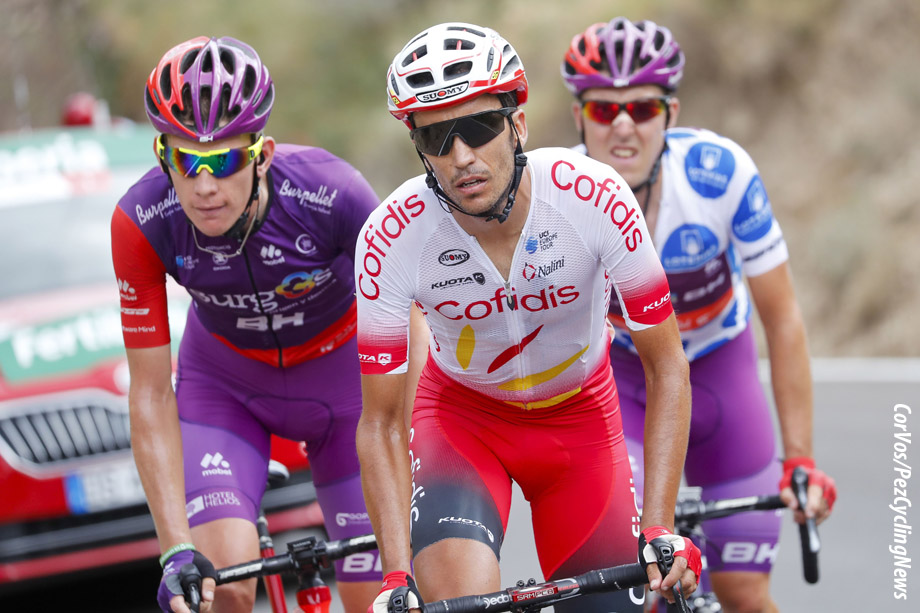 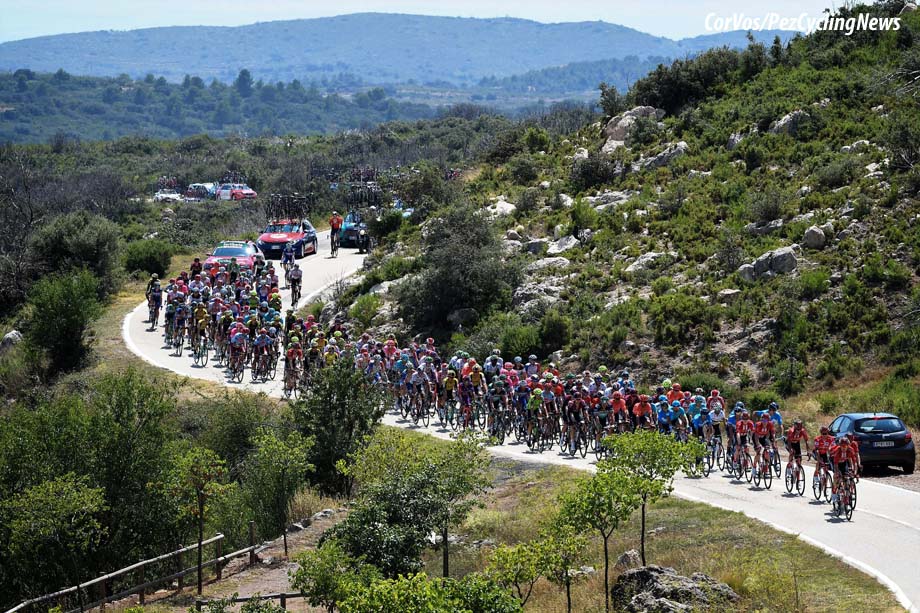 UAE Team Emirates tried to reduce the lead of the break, but received no help from the others. Gregor Mühlberger became the third rider of the 2019 Vuelta to abandon. The Austrian stopped because of health problems, his team reported. 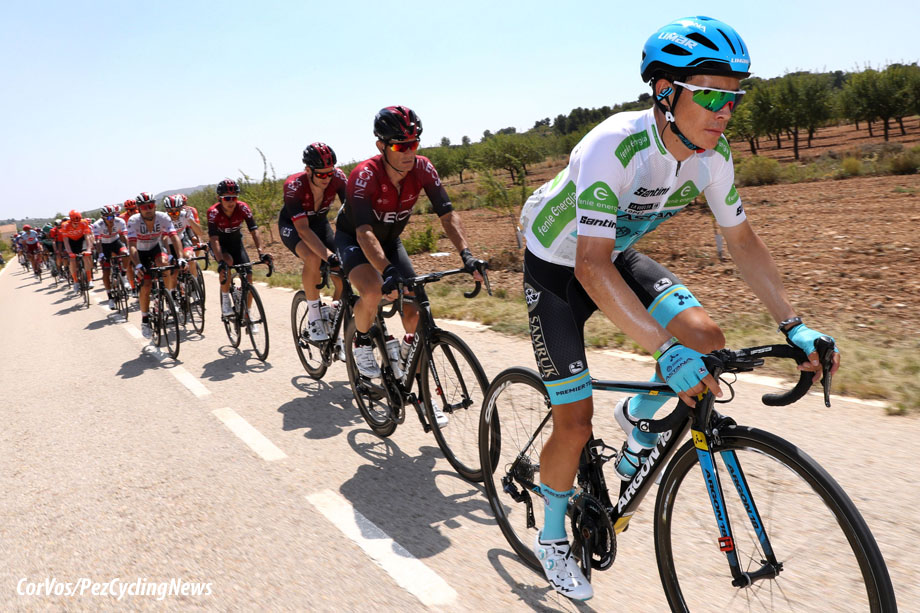 'Superman' Lopez is the man on form... at the moment

The leading group reached the foot of the final climb to the Javalambre observatory with a generous 9 minutes lead. The time advantage suddenly dropped due to Ineos upping the speed for their man, David De la Cruz. When the bunch reached the base of the climb, the difference was barely 7 minutes. 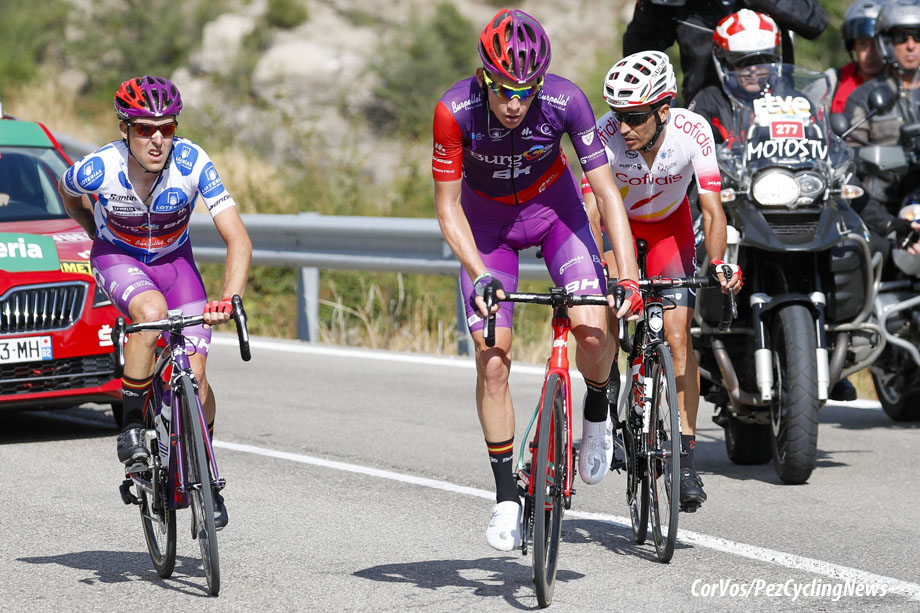 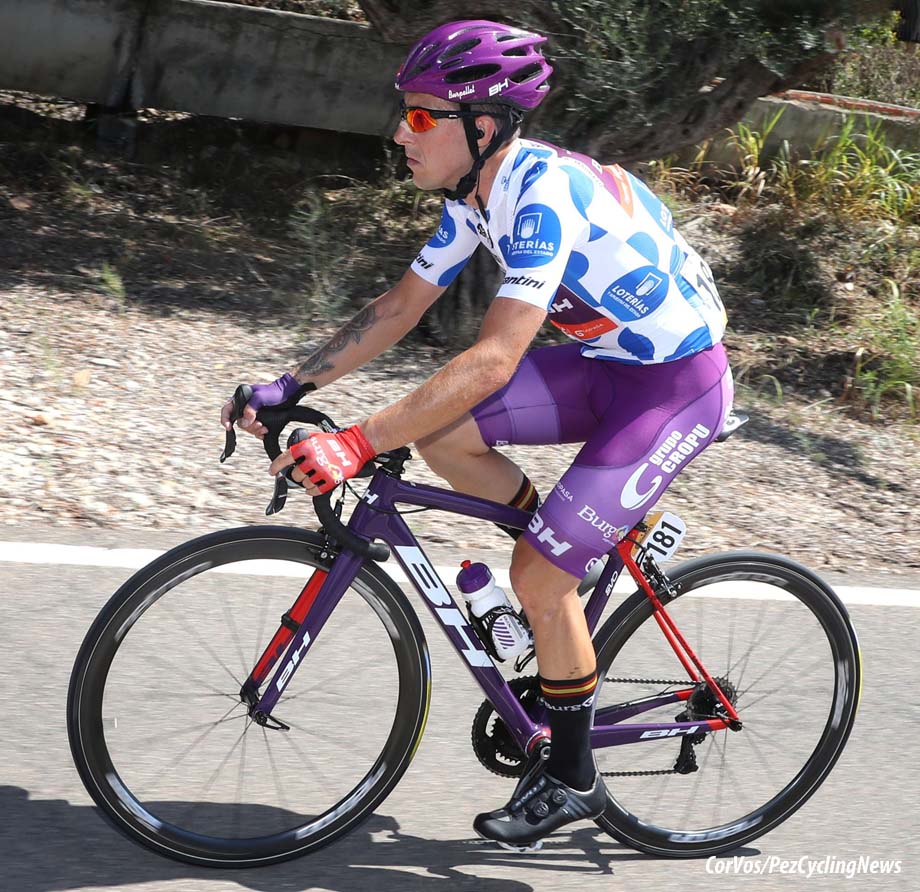 Madrazo was dropped, but got back for the win

On the final climb, Ángel Madrazo seemed the weakest at front when he was dropped 7 kilometres from the finish. However, the Spaniard fought his way back to Bol and Herrada. After that he was dropped again, but the Spaniard showed his spirit by constantly trying to battle back to the leading duo. The three escapees started the last kilometre together. 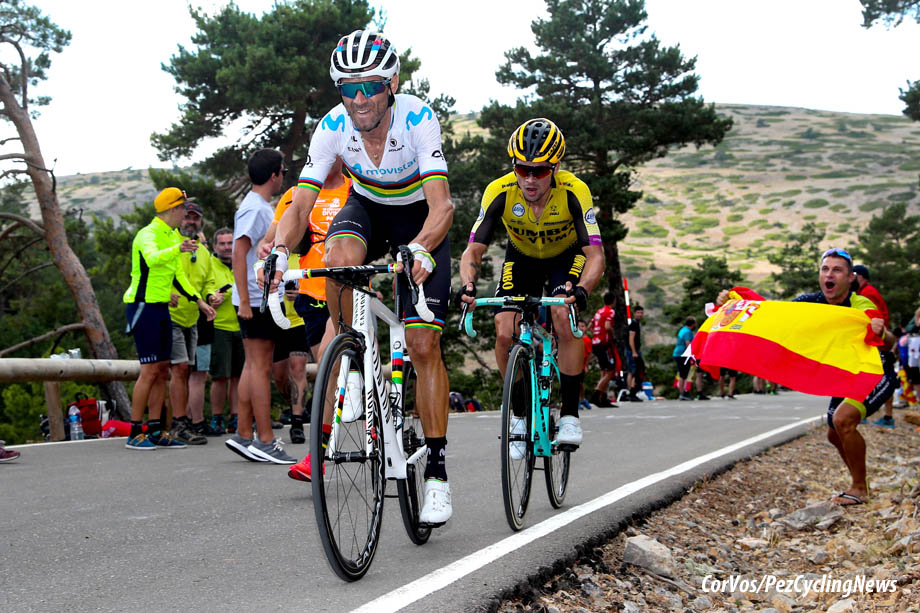 Valverde made the first move 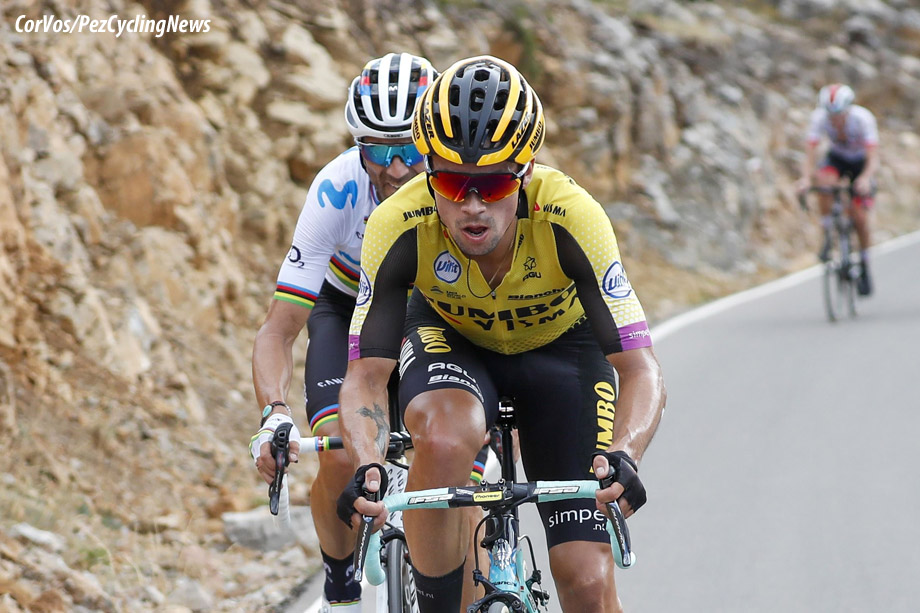 Roglic looked to be holding back

Among the favourites; Alejandro Valverde put the match to the blue touch paper on the climb by attacking. Primož Roglič's Jumbo-Visma teammates reacted and closed the gap to the World champion. The tough climb took its toll, as Mikel Nieve and Sergio Higuita had to ease off. Also Wilco Kelderman, Pierre Latour, Nairo Quintana and the red jersey Roche could not follow. In the end only Valverde, Roglič, Miguel Ángel López and, at first, Sepp Kuss remained together. 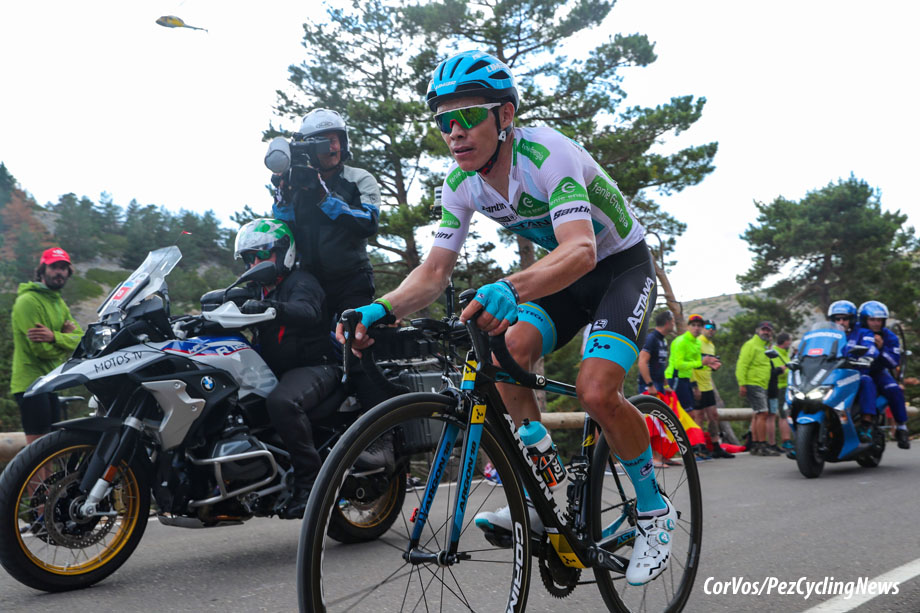 Lopez had the jump

At 3 kilometres from the finish, López turned on the turbo and quickly left Valverde and Roglič. The Colombian, 5th overall, knew he could take the overall lead as Roche was in trouble behind. 'Superman' was getting closer and closer to the front riders, who still had to keep the speed up to take the stage victory. Madrazo placed his decisive attack in the last 200 metres, for the big win for the Burgos-BH team. Jetse Bol completed the party in second place. 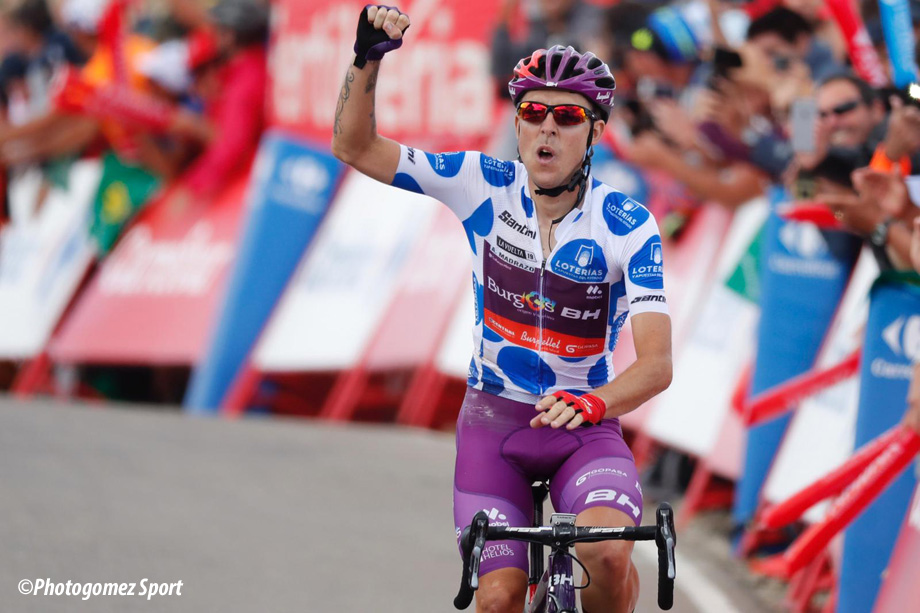 The best day for Madrazo and Burgos-BH

López crossed the finish line 47 seconds later, 12 seconds before Roglič and Valverde and 1:30 ahead of Roche, to pull on the red jersey again after the Astana win in the stage 1 team time trial.

Stage winner, Angel Madrazo (Burgos-BH): "To win here is one of the biggest achievements as a cyclist and for me it’s become a dream come true. With 50km, Herrada pushed in a climb and I was dropped. I was able to come back thanks to my mate Jetse Bol. The team was telling me to save energy for tomorrow, for the mountain points… And I told them: ‘No, no, we need to go for it, we can’t put off until tomorrow what can be done today.’ When I came back in the last kilometre, I saw José (Herrada) was faltering and I accelerated for Jetse… And in the end I was the winner! The polka-dot jersey has helped me. I was going for the KOM points. And when we saw the gaps, I told the team we had to keep pushing. Grand Tours need teams like us who are ready to kill themselves on flat and mountain days to appear on TV." 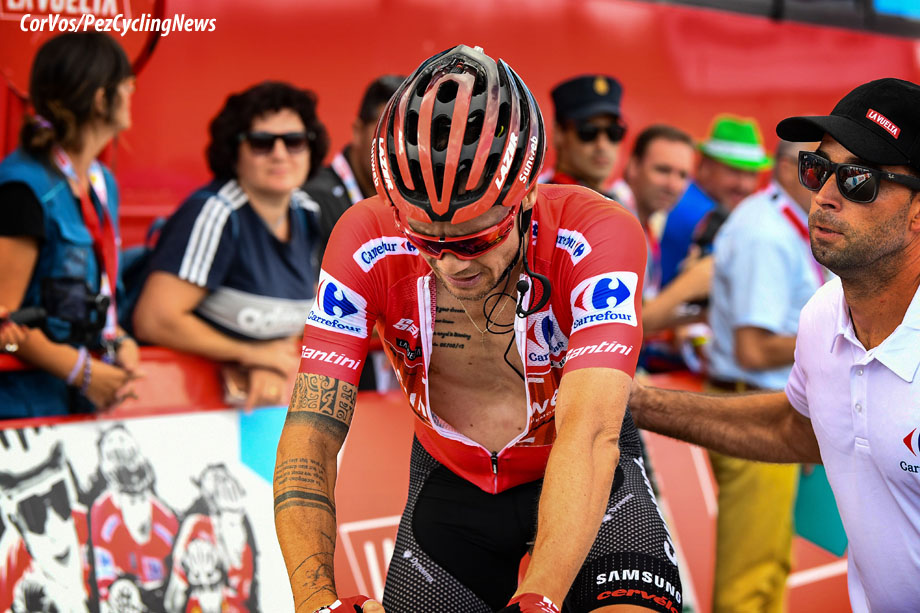 lead over for Roche

New overall leader, Miguel Angel Lopez (Astana): "The beginning of the climb was a bit fast but I always felt good. I waited to attack when the leaders were on their own. I went when it was only Roglic and Valverde, to see how they would react and because I like to put on a show when I have the legs to make people enjoy. When I saw I was going solo, I just went all in. We’ve only won a few seconds but that’s already something. We’re happy with the result and the great work inside the team. There’s a lot of racing left but so far everything is going great for us. There’ll be more differences opening in the next days. La Vuelta 19 is getting hard." 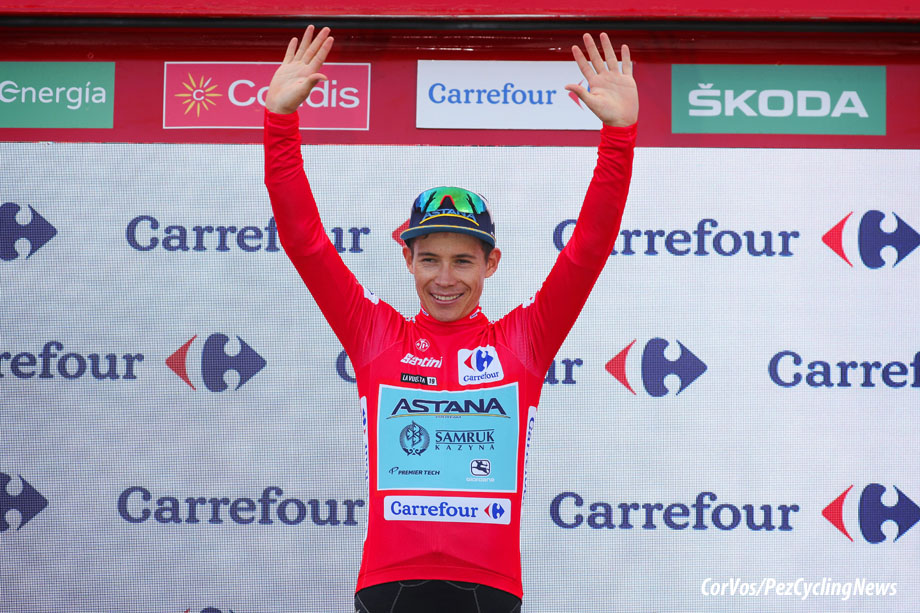 Lopez back in red