Race Report: The win on stage 15 of the Giro d’Italia on Sunday went to Dario Cataldo after a long break with countryman Mattia Cattaneo (Androni Giocattoli-Sidermec). The Astana rider was the best at the end of the Lombardy stage after a break of more than two hundred kilometres. Behind; Richard Carapaz (Movistar), Vincenzo Nibali (Bahrain-Merida) and Simon Yates (Mitchelton-Scott) were the big winners, as Primoz Roglic (Jumbo-Visma) lost 40 seconds due to a late fall. Carapaz held onto his pink jersey. 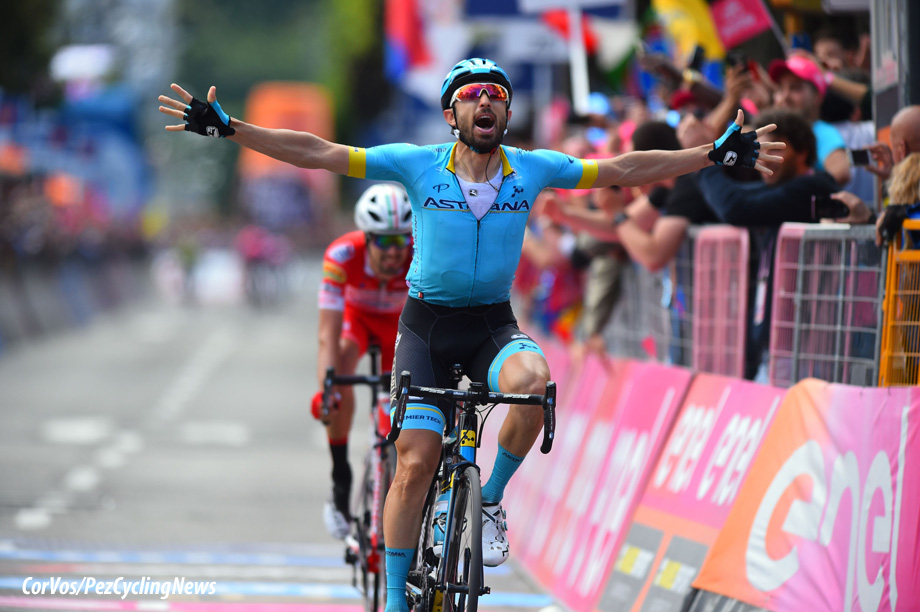 The win went to the hard working Cataldo

It took a while for a leading group to form, but it wasn't the expected large group... just two riders. Mattia Cattaneo (Androni Giocattoli-Sidermec) and Dario Cataldo (Astana) joined forces and quickly took a big lead from the peloton for a ride of 232 kilometres all the way to the finish in Como. 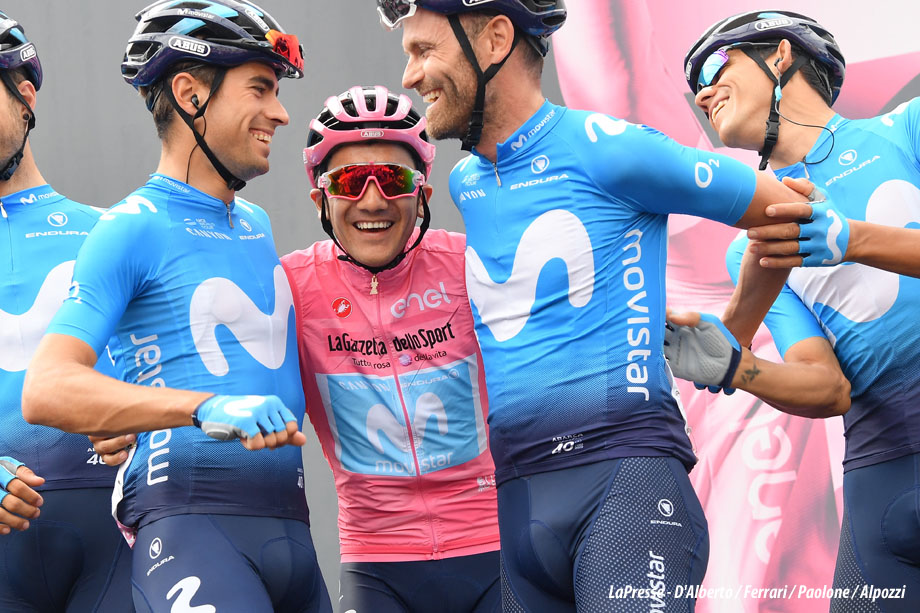 A happy Movistar team at the start

ROUTE:
Stage 15 – Ivrea-Como 232km – total elevation 3,000m
The route covers 160km on perfectly flat roads, passing through densely populated areas, with roundabouts, traffic dividers, pedestrian islands, Sett paving and speed bumps being the main obstacles typically found in almost all urban areas. After crossing Cantù and Erba, the route reaches Pusiano and Asso, descends into Onno, and runs lakeside all the way to Bellagio, to the foot of the Ghisallo climb. The route climbs in hairpins on broad roadway, with maximum 14% gradients, then drops fast on long straight roads, as far as Maglio.

Here, the road turns left onto the Colma di Sormano. Past the Colma, the route drops to Nesso (starting with a false flat, followed by a technical descent with hairpins and narrowed roadway) and runs along the lakeshore, heading into Como. After a harsh climb to Civiglio, with steady 10% gradients (and a marked road narrowing at the top of the climb), the route drops down, crosses Como again and reaches the finish. 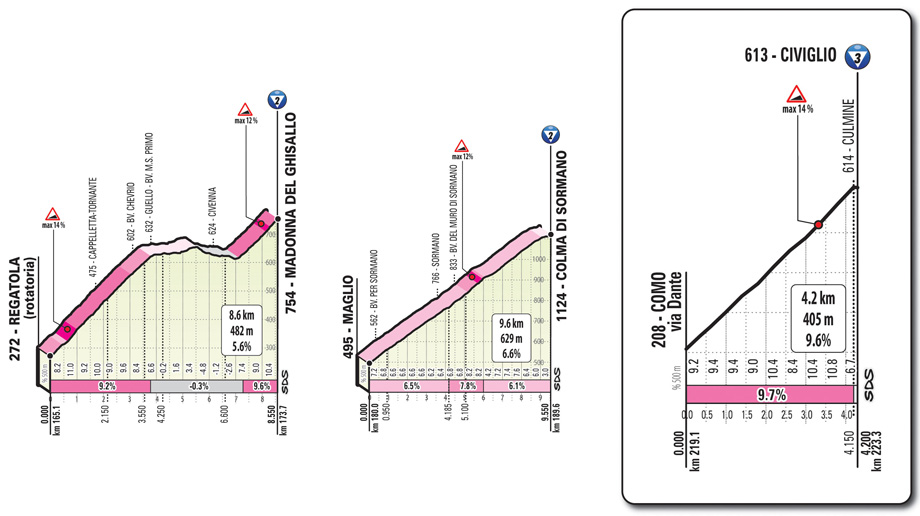 Final kilometres
The last 3km run along broad avenues in urban Como, all the way to the final kilometre, leading straight to the lake. The last bend is 300m from the finish line, which sits on 6m wide tarmac. 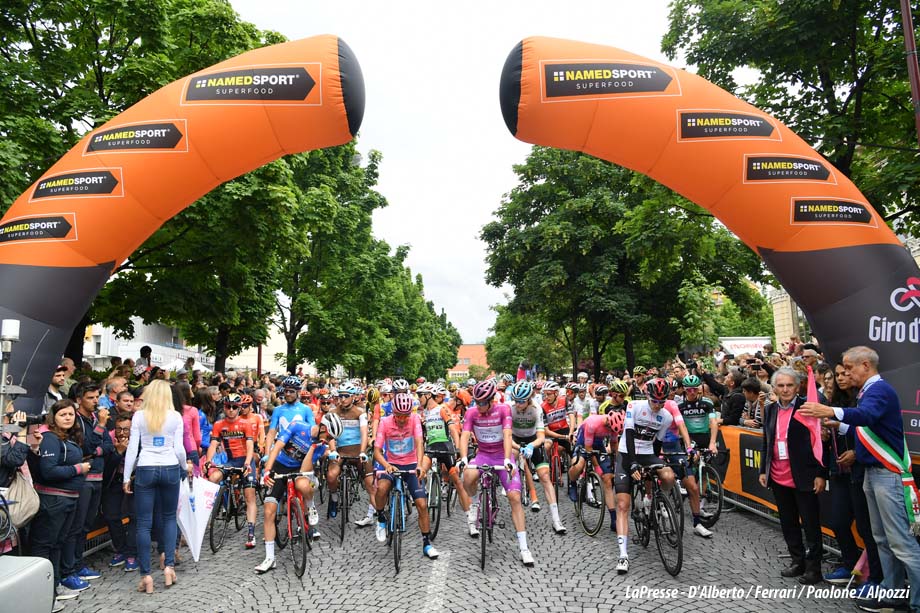 A hard finalé ahead 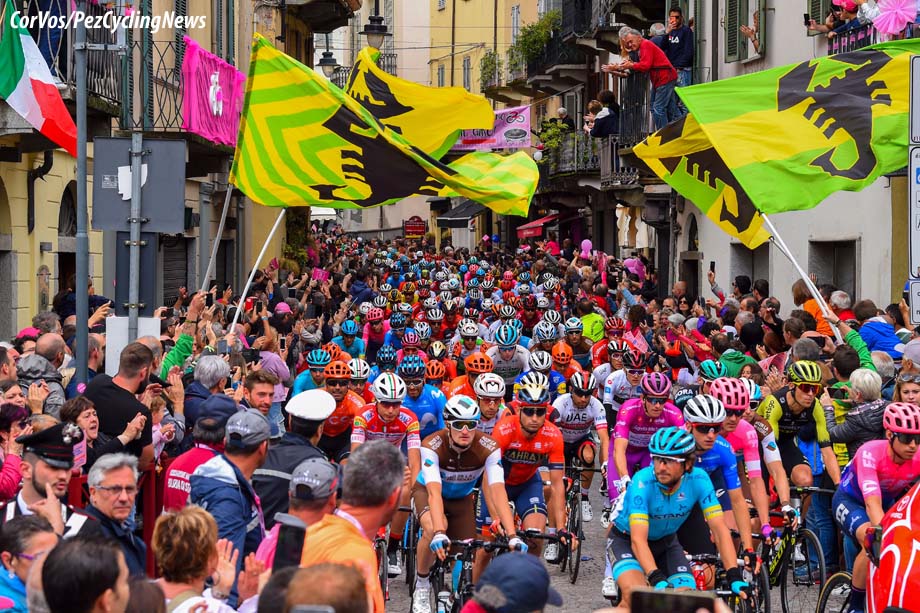 As always - Lots of fans at the start 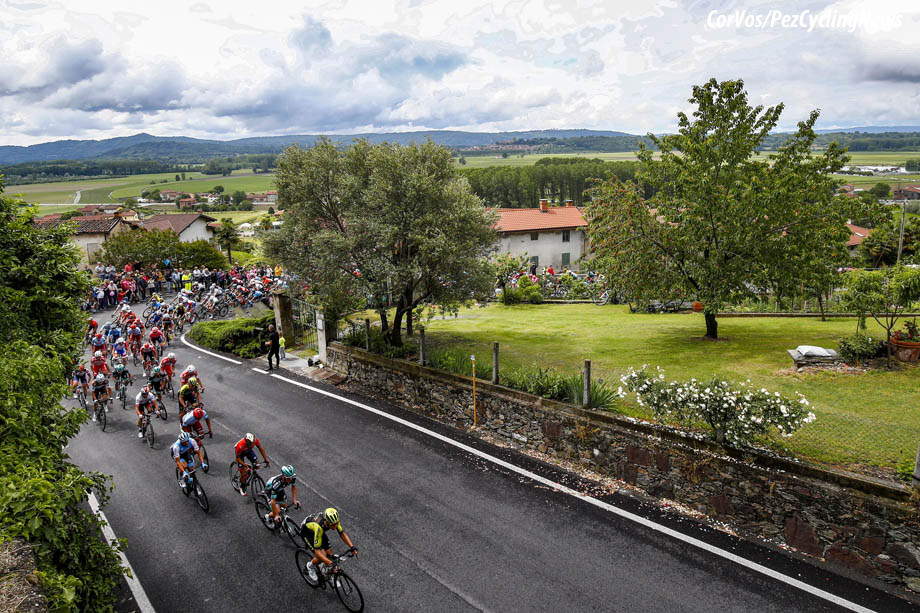 The Movistar team of pink jersey Richard Carapaz let the lead of the two to go to more than 15 minutes, Mitchelton-Scott had another idea and thought that would be too much. Simon Yates led his teammates to limit the lead before the grand finalé. The lead dropped to less than 10 minutes, with the Tour of Lombardy style finish to come. 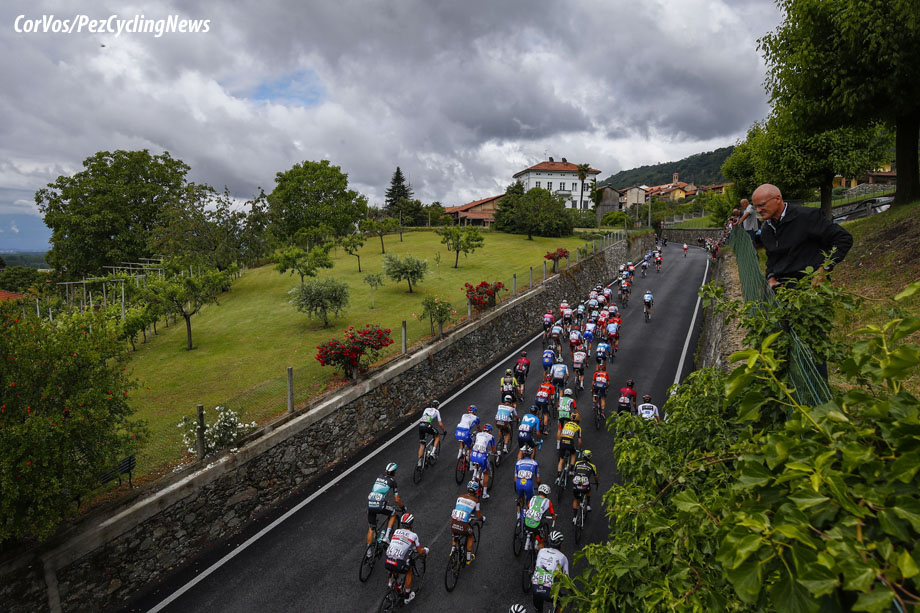 The Giro'19 hits the Lombardy climbs 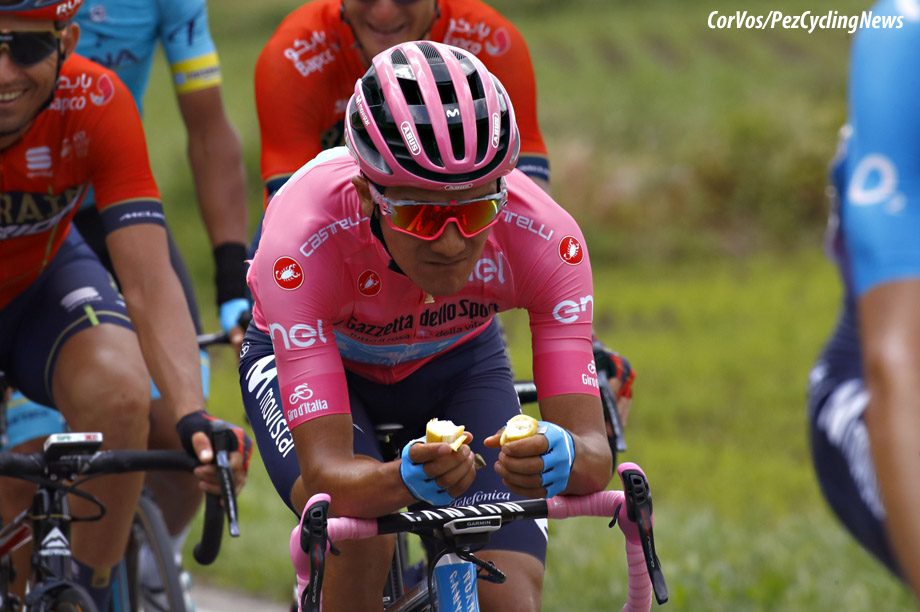 Lunch time for the pink jersey

The final started with a descent near Onno, with 70 kilometres to go. During winding drop, the peloton broke into several pieces and they were soon at the foot of the Madonna del Ghisallo. All favourites were at the front, with Movistar setting the pace which thinned the pack. The break of tow held up well, although Cattaneo needed a bike change, which did not help to maintain their lead. With 7 minutes, the Italian duo crossed the summit of the Ghisallo. This was followed by the Colma di Sormano and with 45 kilometres to go, Simon Yates put in a surprise attack. 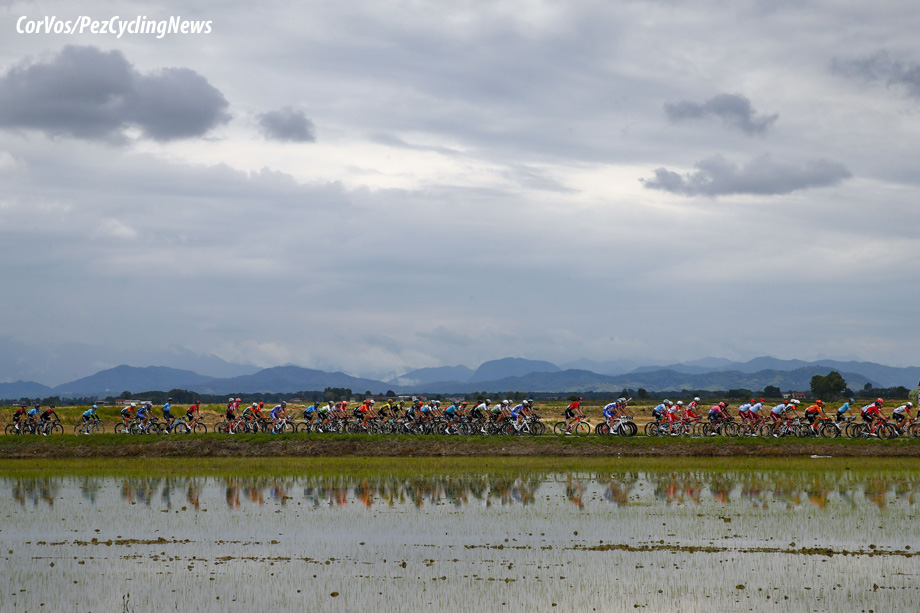 There has been a lot of rain recently 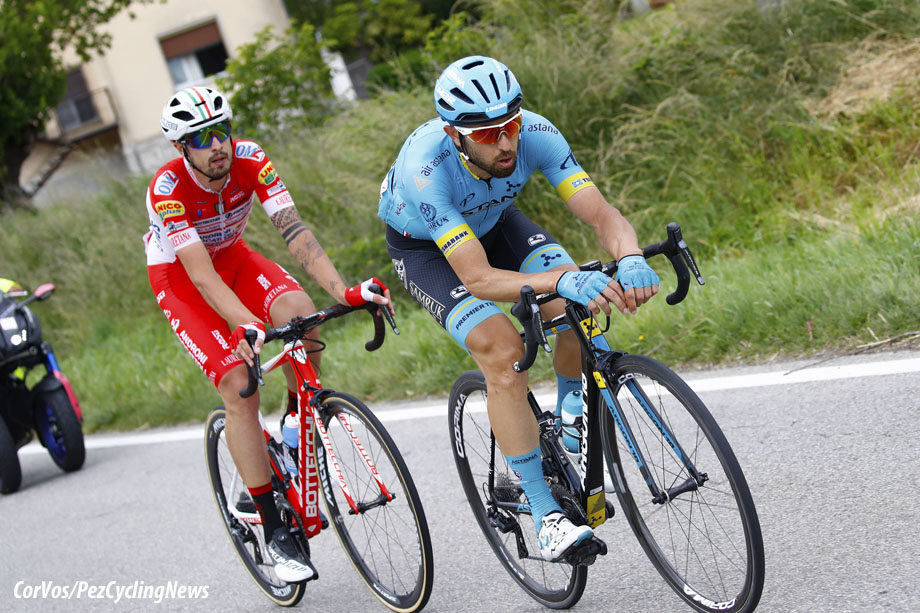 Carapaz reacted immediately, with Mikel Landa (Movistar) and Vincenzo Nibali in his wheel. Primoz Roglic did not see the attack coming and had to close the gap. Yates again, but was controlled by Movistar. Just before the top of the Sormano, Miguel Ángel López (Astana) passed Yates, hoping to hit the fast descent with a head start. 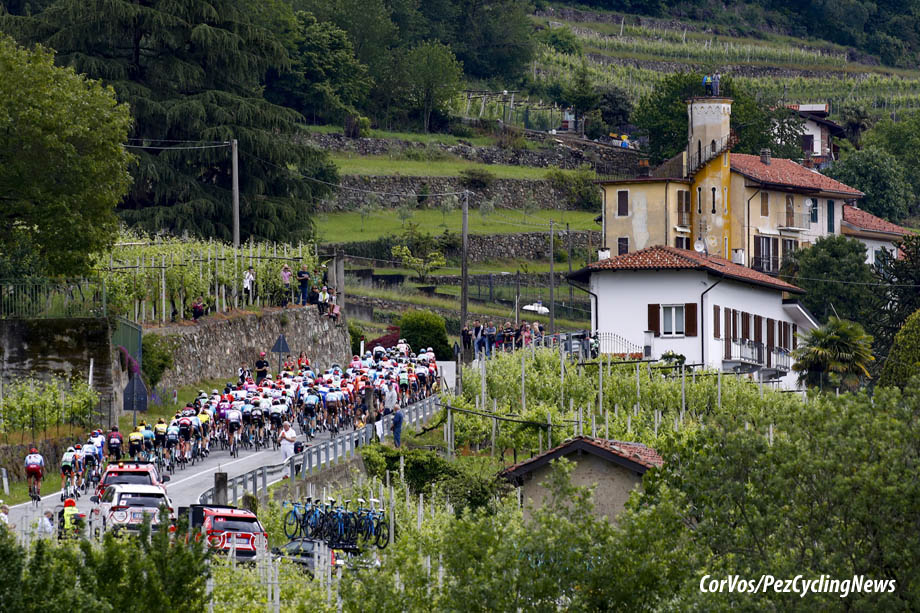 López couldn't escape and the group came down in a long ribbon, still 4 minutes behind the two front riders. On the flat after the descent the peloton kept a steady pace, this probably gave the two Italians enough time to fight for the stage victory. The favourites were waiting for the climb of the Civiglio before lighting the blue touch-paper. 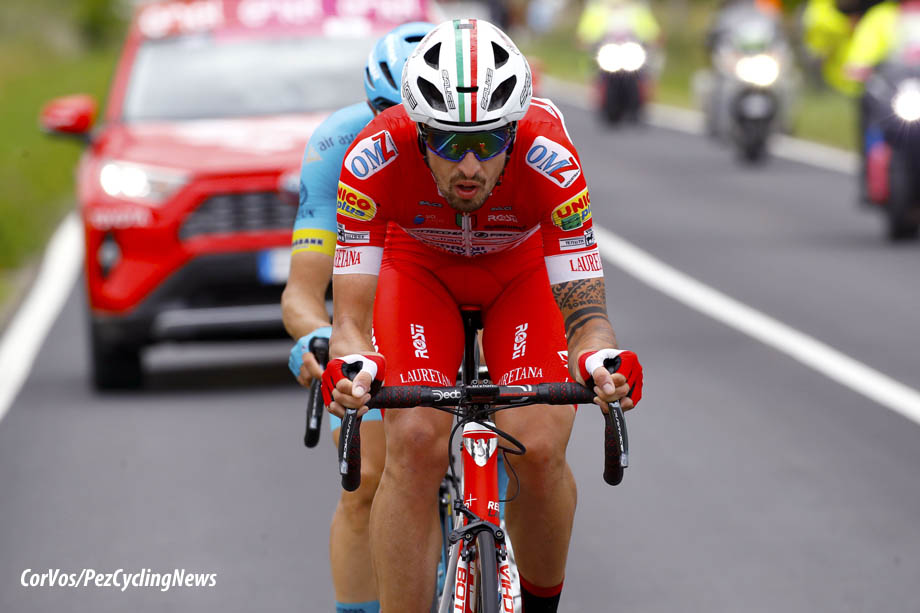 Cattaneo and Cataldo were out front for a long time

Primoz Roglic was suddenly nowhere to be seen and had lost nearly half a minute to the GC riders group due to a mechanical. The Slovenian had to chase on teammate Antwan Tolhoek's bike, but managed to regain the group before the climb of the Civiglio. At 3:20, the chase group started the Cat 3 climb. 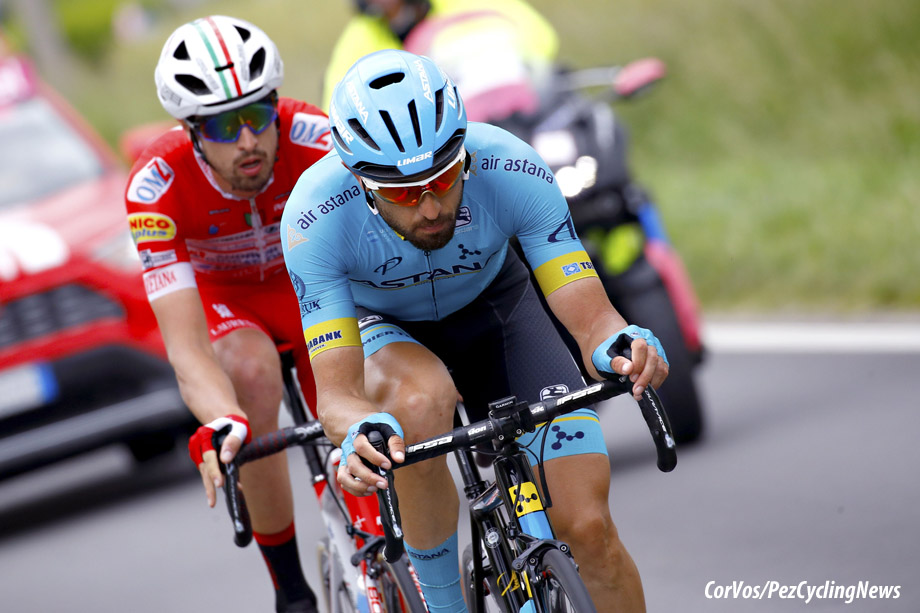 Cataldo was left to do all the work in the finalé

Movistar kept the pace high at the base of the climb, then Hugh Carthy (EF Education First) took over. Next up was his countryman Yates who gave it a dig at the front, but there was no response. Vincenzo Nibali saw his chance to put in an acceleration with Carapaz in its wheel, while Roglic was unable to respond. The Slovenian had to chase and didn't seem to have the power to get to Nibali. 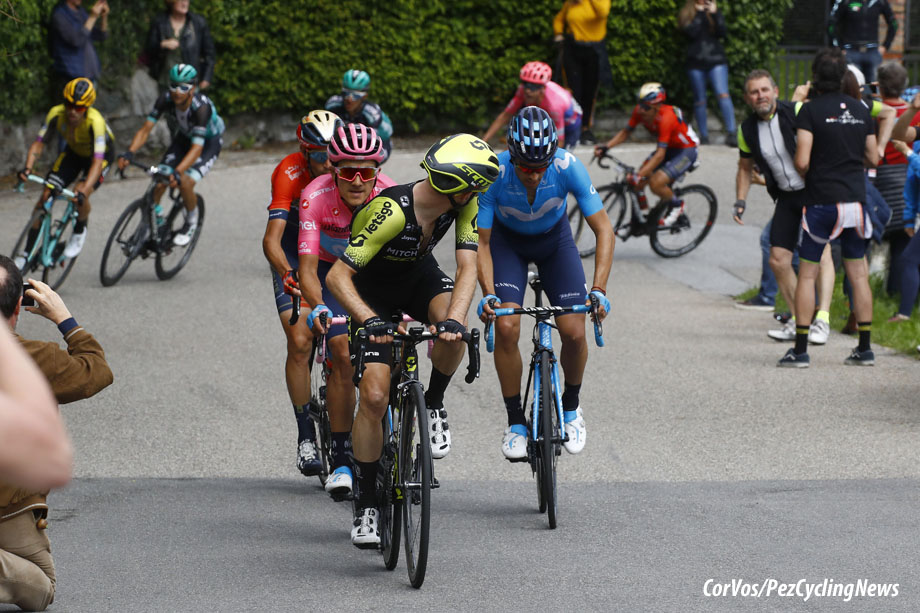 Yates made an attack that started the main action

Nibali and Carapaz joined Yates. At the summit Nibali gave another kick and could only be followed by Carapaz. Roglic tried to limit the damage, but he crossed the top at 12 seconds. 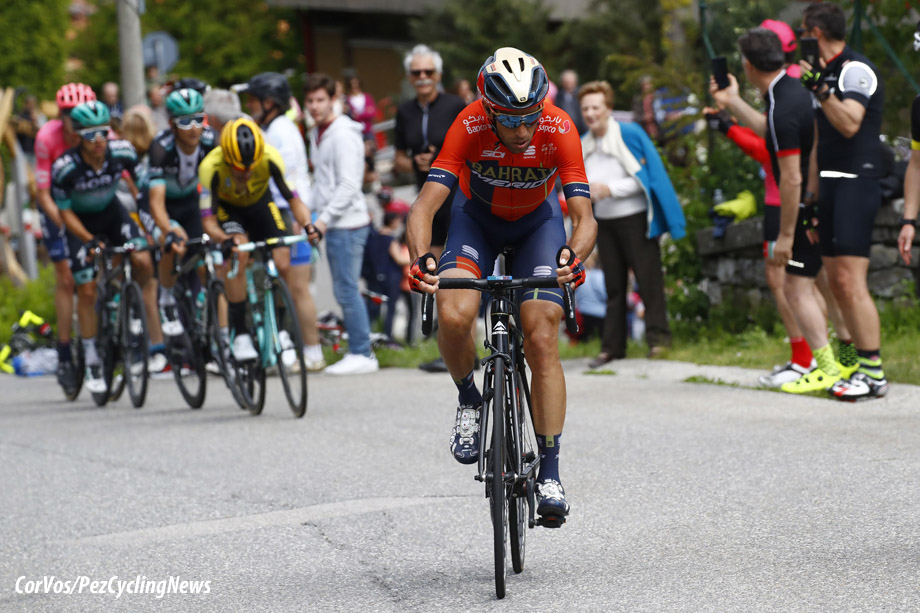 Nibali nearly pulled it off

The two attackers started the descent with a minute lead. Cataldo took the lead, but after the descent there was some disagreement and Cattaneo would not take the lead from Cataldo. Behind; Nibali was descending like a stone. The Italian dropped Carapaz, although they did return to Nibali in the streets of Como. In a sprint between the two leaders, Cataldo proved to be the strongest. 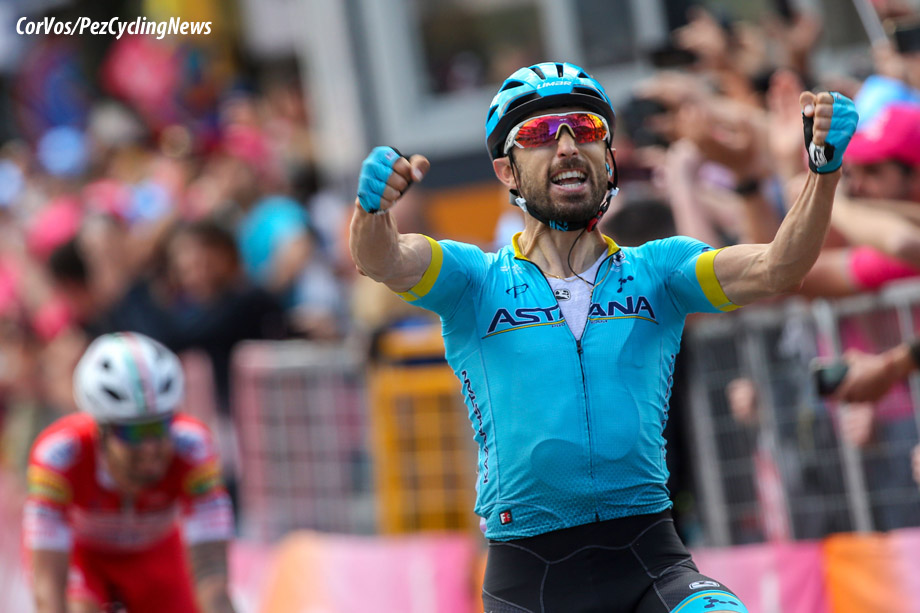 Cataldo had the sprint 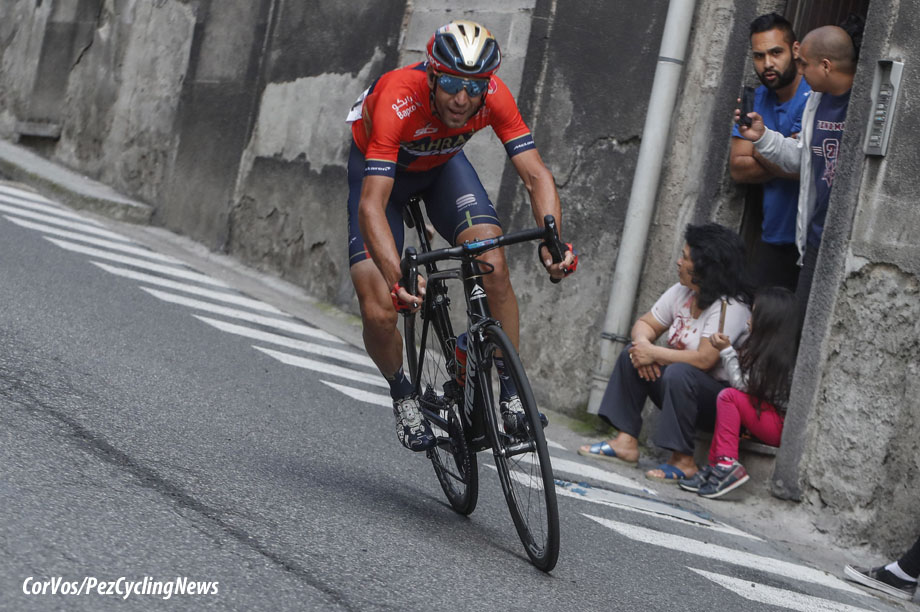 Nibali held everyone off on the descent

Roglic had to chase on the descent of the Civilgio and he risked took much and hit the crash barrier on a tight right hand bend. The Jumbo-Visma leader seemed to be unhurt and remained calm and continued on his way. Roglic did lose a lot of time on Nibali and Carapaz, the difference was around 40 seconds by the finish line. There was another group between both groups, including López and Landa. 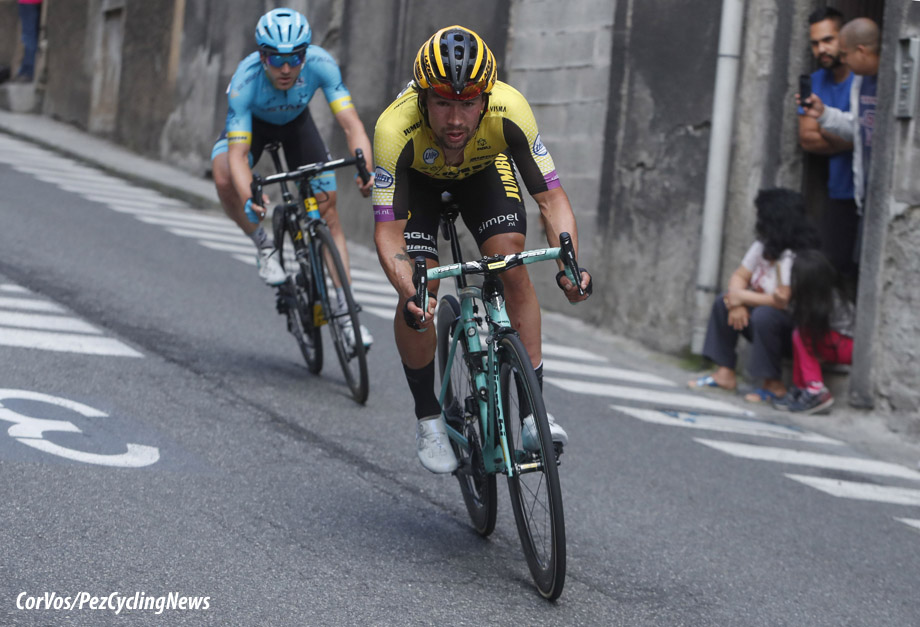 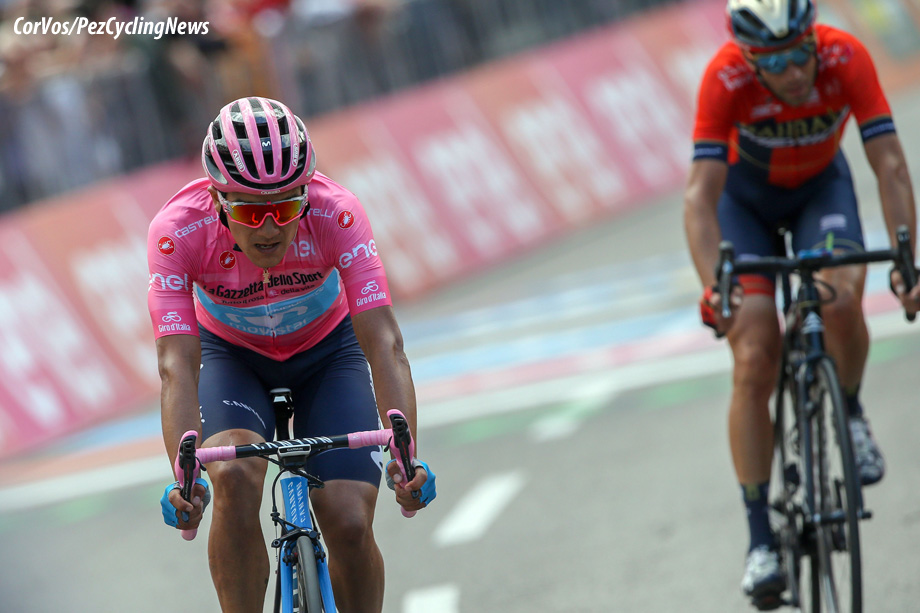 Carapaz pulled Nibali back before the line

Stage winner Dario Cataldo (Astana): “I wasn't even thinking of breaking away after I suffered so much these past two days. But as the race began, my legs felt ok. I just followed Cattaneo's attack. Then I was confident in myself. To win a stage at the Giro d'Italia is amazing. It's something I've been dreaming of all my life.” 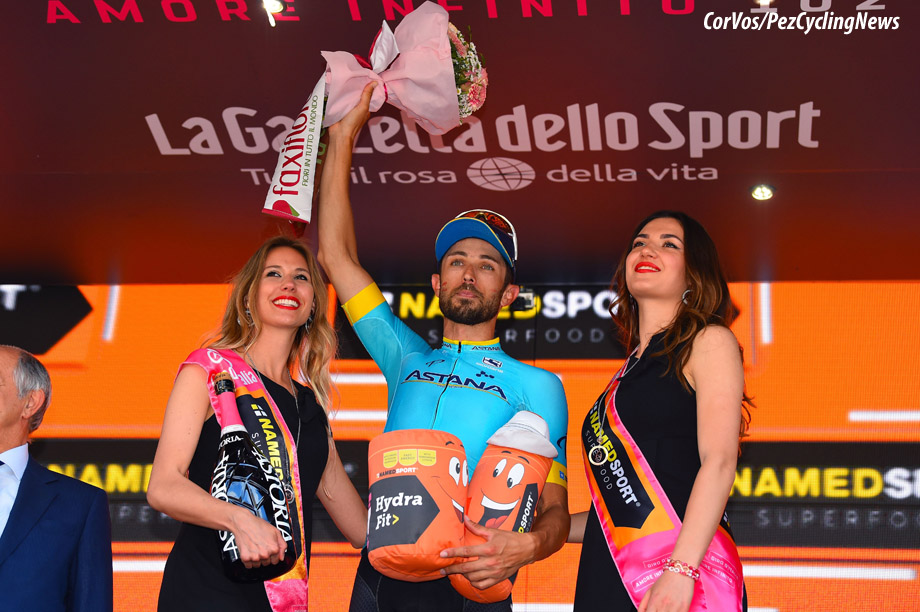 Race leader Richard Carapaz (Movistar): “We knew it would be a nervous finale with a dangerous downhill so I paid attention to Vincenzo Nibali's moves and it went well at the end. A rest day is now well deserved for my team and myself before the hard stages that are yet to come.” 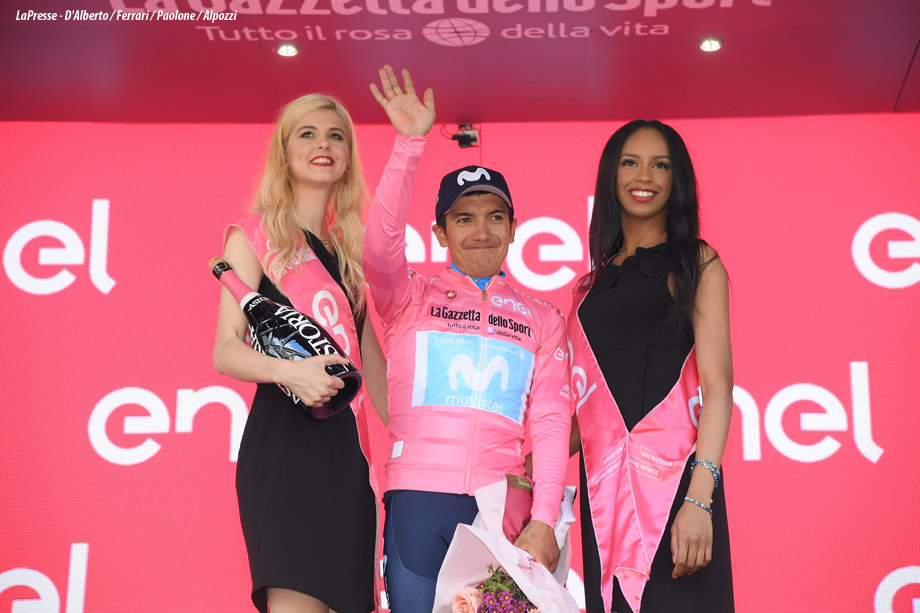