Race Report: AG2R-La Mondiale's Nans Peters took a fine first professional victory on the Giro d'Italia 2019 stage 17 to Anterselva. The Frenchman went with the early break, and then on the run-up to the final climb, he took his leave of his compatriots to solo to the finish. The overall didn't change, although there was a late skirmish from overall leader, Movistar's Richard Carapaz. 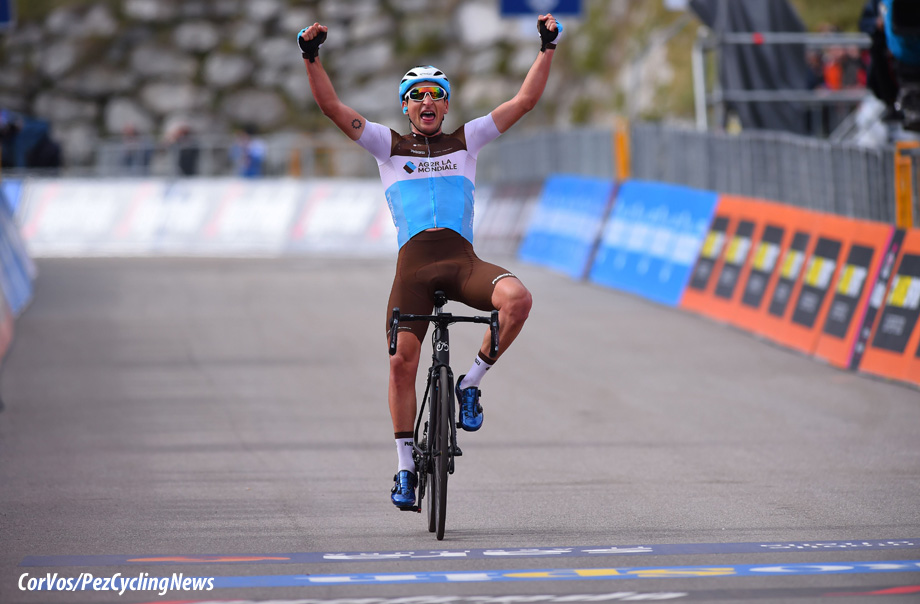 Wednesday was a memorable day for overall leader, Richard Carapaz, as it was his 26th birthday. The Ecuadorian and his Movistar team were ready for another difficult stage with 3,000 meters of climbing to overcome on the way to the uphill finish at the winter sports stadium of Anterselva/Antholz, the site for next year's biathlon world championships. 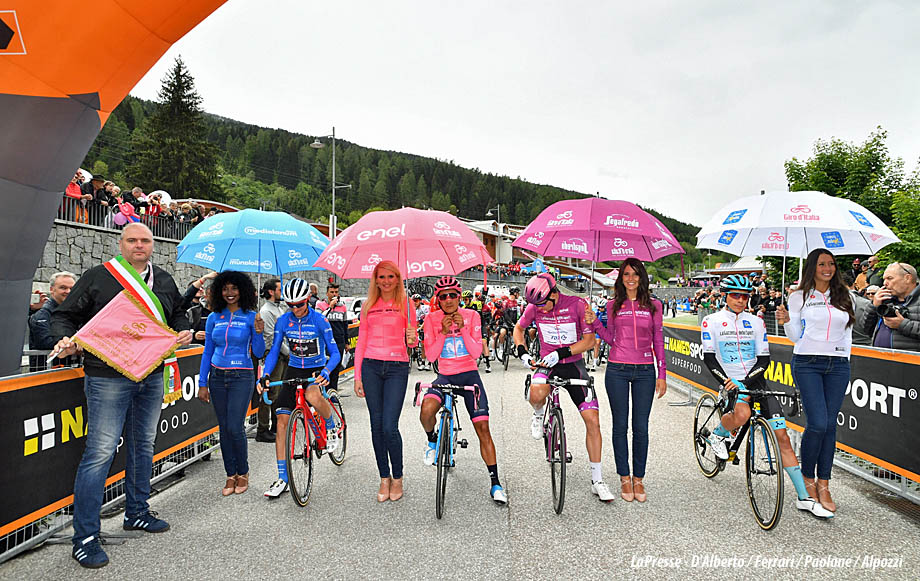 All the Giro jerseys on the start line

Route:
Stage 17 – Commezzadura (Val di Sole)-Anterselva/Antholz 181km – total elevation 3,000m
The stage profile is wavy and twisting as it passes through several urban areas. The route starts downhill to the Val di Non, and takes an unprecedented climb to Passo della Mendola from the Fondo side, hitting steeper gradients. The course drops down into Bolzano and then climbs up the Eisack Valley, all the way to Bressanone. The riders will take in a succession of climbs and descents, with categorised summits in Elvas and Terento, leading to the foot of the final climb in Anterselva/Antholz. 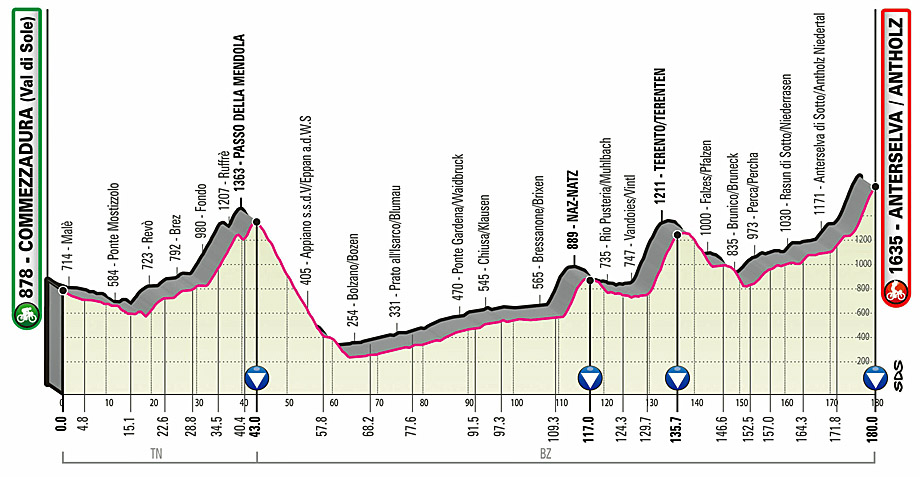 Final kilometres
The final climb is very demanding, as the road slopes at an average 8.5% gradient from 5.5km to go, all the way until the red flag. After a short ascent, the route reaches the cross-country skiing track at the Biathlon stadium, then drops for 100m through the tunnel that passes under the road, to finally enter the stadium. The home straight (110m) is on 6.5m wide tarmac, after the shooting range. 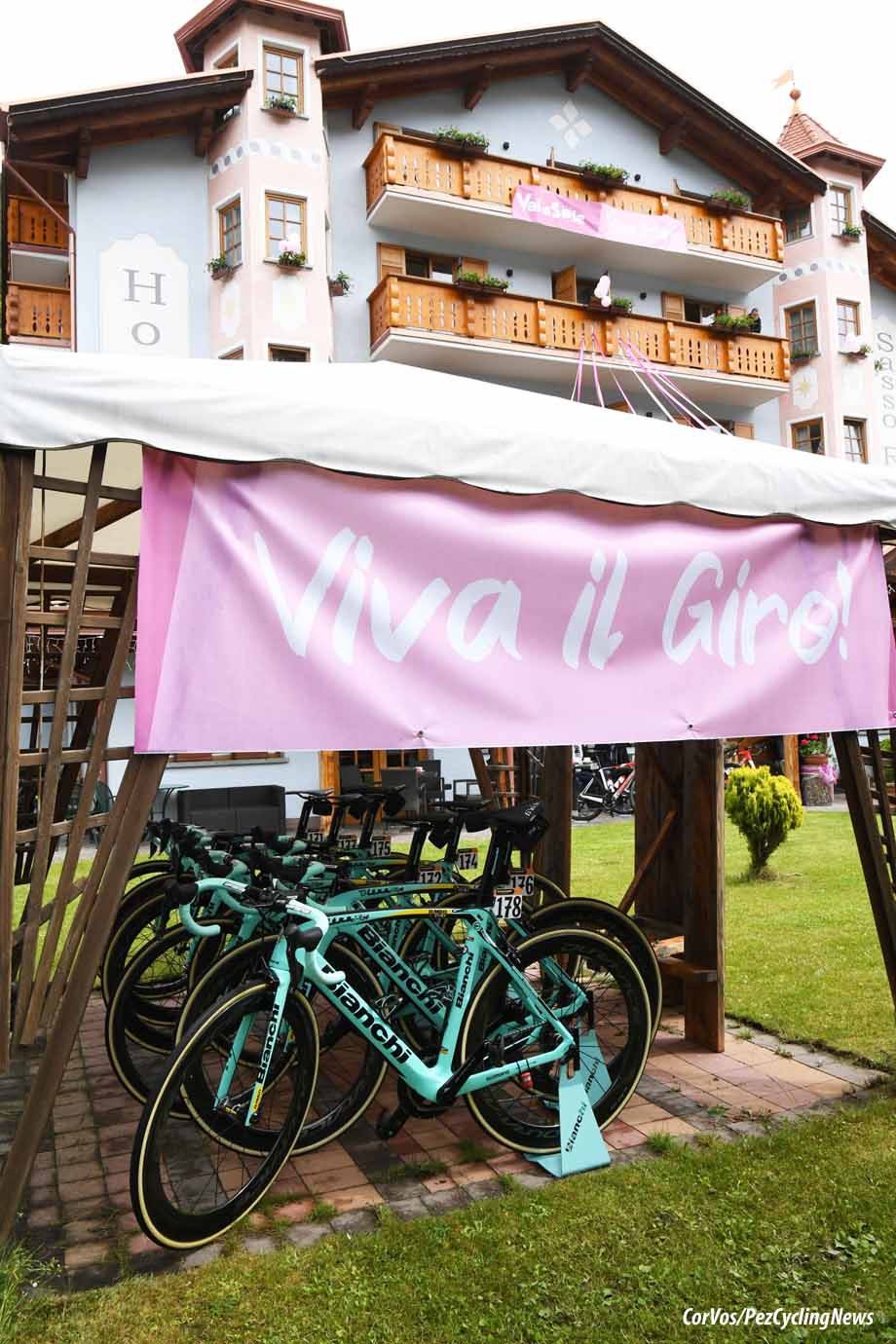 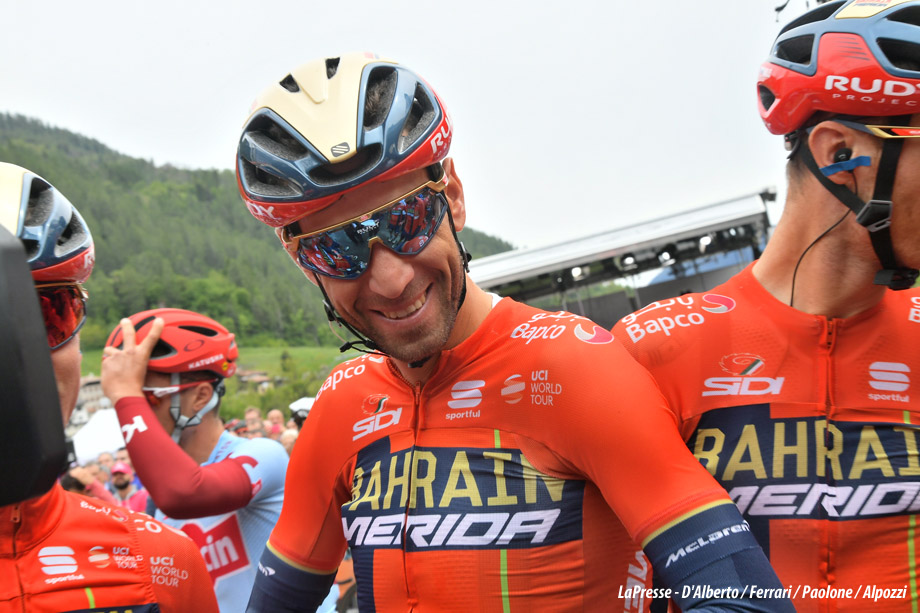 Vincenzo Nibali looks happy with the way the Giro is going 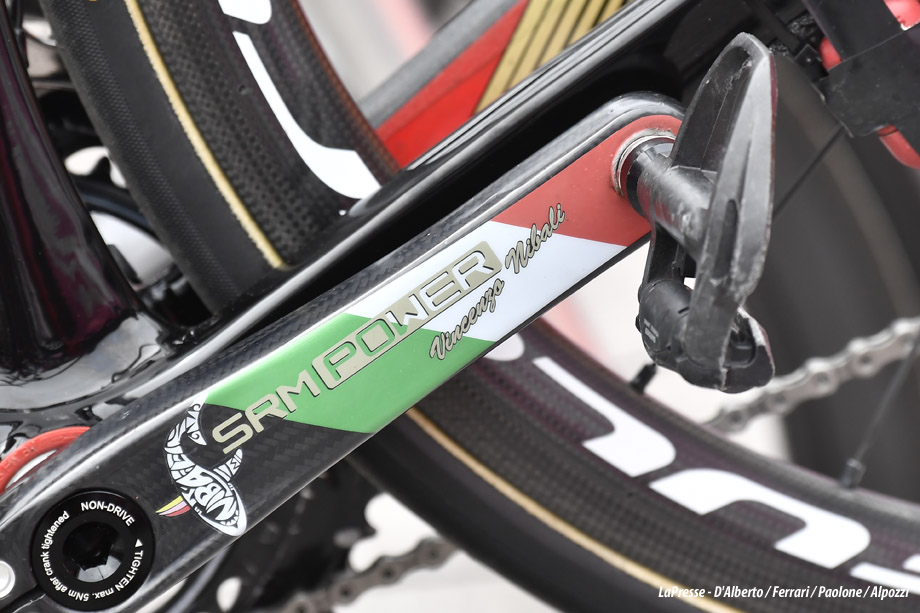 After the harsh weather conditions on yesterday's stage to Ponte di Legno, today it was cloudy and fresh at the start in Commezzadura, and it was expected to stay that way. Many riders tried to make an escape on the descent to the Non Valley. But the 'break of the day' formed on the Passo della Mendola, the first climb of the day. Nine riders joined forces, including Lotto Soudal's Thomas De Gendt, again. More riders joined, bringing the number up to 18. Koen Bouwman, Jan Bakelants, Valerio Conti (wearer of the pink jersey for six days), Bob Jungels (winner of Kuurne-Brussels-Kuurne) and Fausto Masnada (stage winner on stage 6). Davide Formolo was the best classified rider in 12th place at 11:51 from Carapaz. 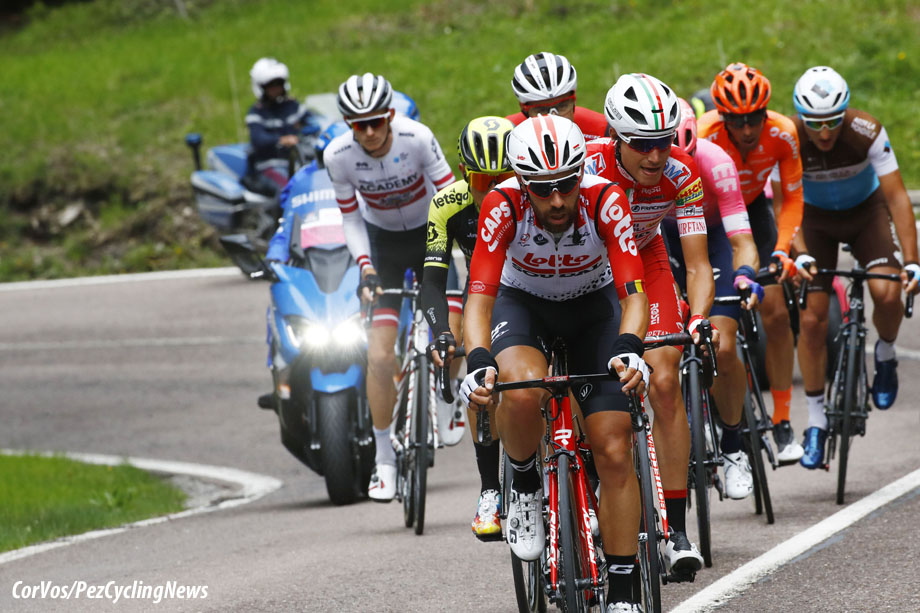 Thomas De Gent leading the 'Break of the Day' 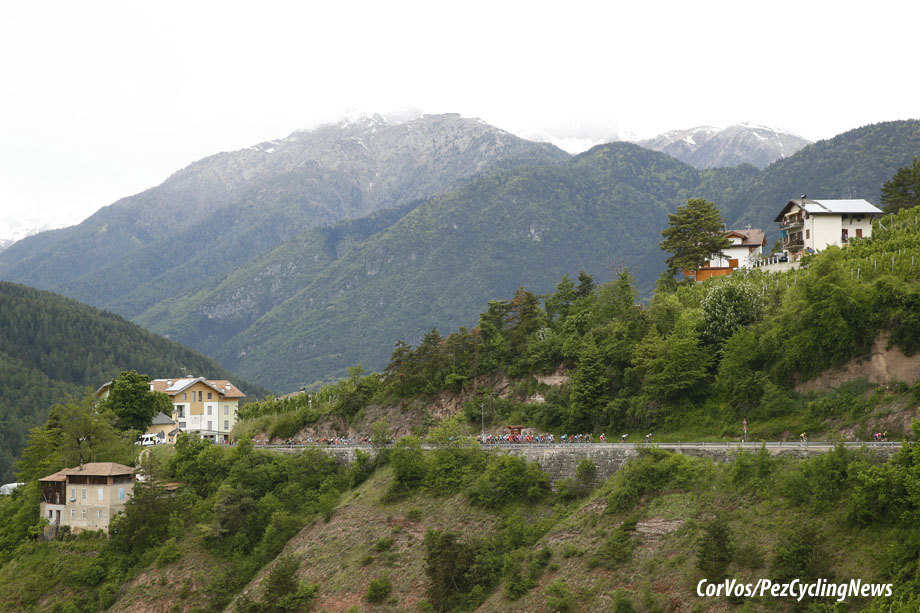 'Piano' in the peloton

The teammates of Carapaz (Movistar), Vincenzo Nibali (Bahrain Merida) and Miguel Ángel López (Astana) kept their powder dry. Also Groupama-FDJ, Nippo-Vini Fantini-Faizanè, Dimension Data, Ineos and Katusha-Alpecin were not represented up front. By the halfway point the leading group had 6 minutes. The break raced through the Eisacktal towards Bressanone, after which the climbs to Elvas and Terento would soon follow. 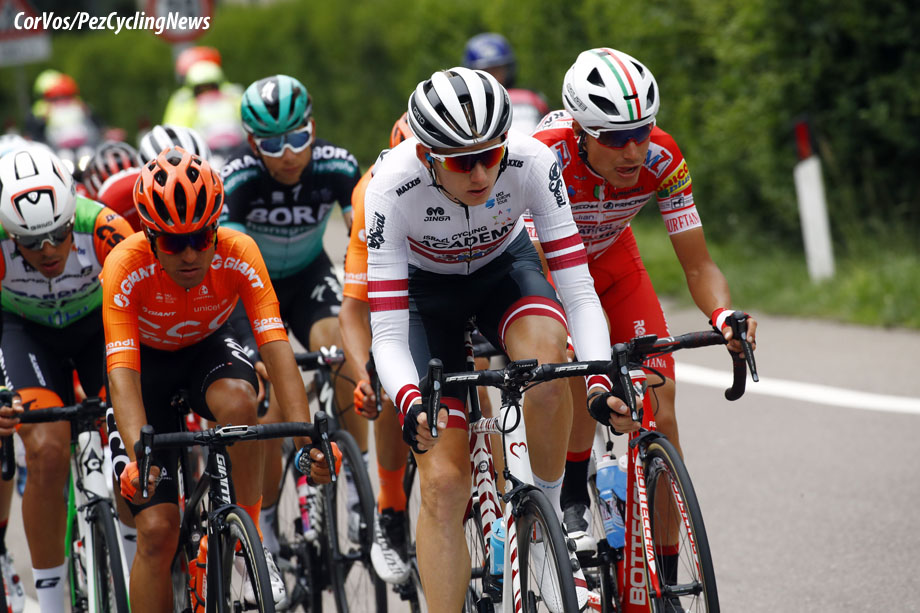 The intermediate sprint in Bressanone went to Mirco Maestri, who was too fast for Masnada in 2nd place, Masnada took over the lead in the sprints competition. After the intermediate sprint, Bakelants jumped away. On the climb to Elvas the Belgian took 30 seconds on his fellow escapees. He was the first to reach the top and started the climb to Terento, just fifteen kilometres further on, with almost a minute in hand. 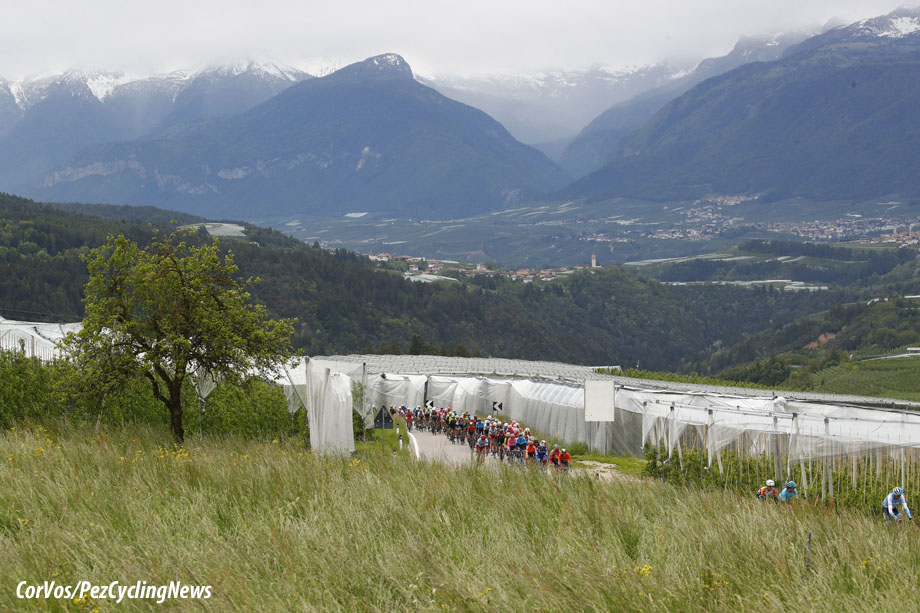 Snow on the mountains

Thanks to De Gendt's efforts, Bakelants' lead quickly diminished and even before the top he was caught up by De Gendt, Gianluca Brambilla, Formolo, Chris Hamilton, Masnada, Krists Neilands and Nans Peters. Masnada was the first to the top and on the descent Nicola Conci and Conti joined, giving us ten leaders together for the final 30 kilometers. 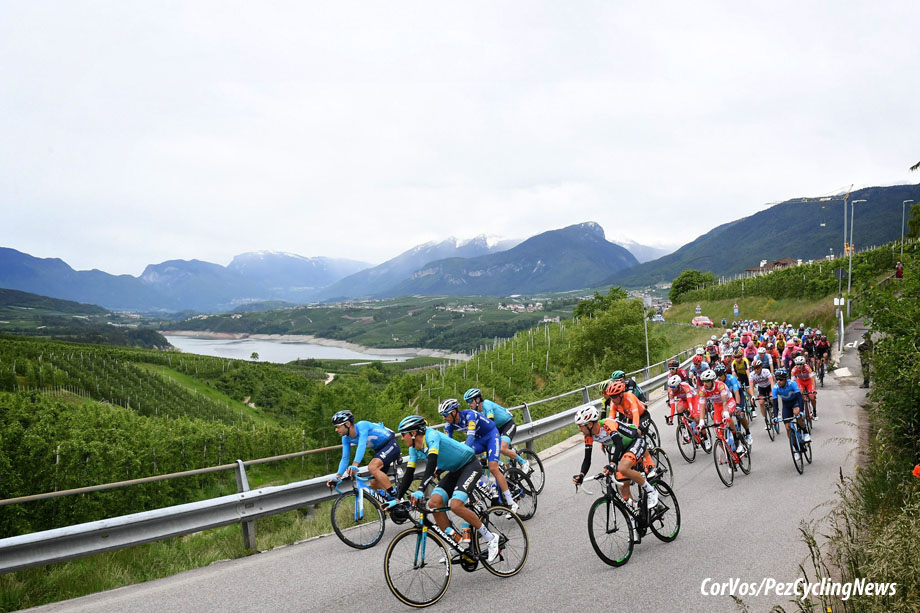 Astana and Movistar were in control of the peloton

What remained was the final climb to Anterselva, where the finish line was at 1,635 meters altitude. Eight dropped riders from the break managed return to the front in the valley. The lead on the peloton was now around 6 minutes as the road started to climb again, 25 kilometres from the finish. At this point the leading group split again. 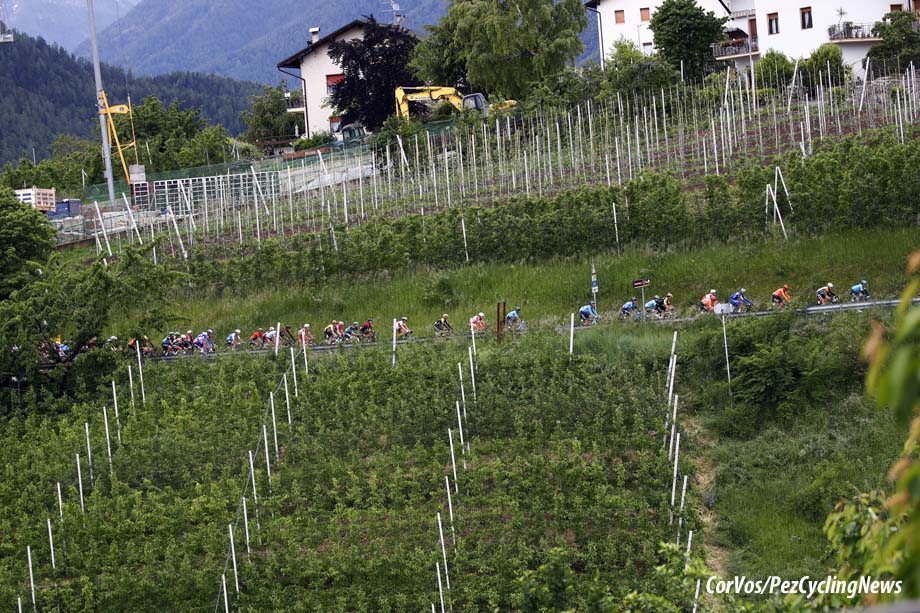 Conti and initially Conci jumped away for a while, but 5 kilometres later everything came together again. A few kilometers later Peters tried and the 25-year-old Frenchman from AG2R-La Mondiale immediately took a nice lead. He started the final climb to Anterselva with nearly a minute lead for the last 5.5 kilometers at 8.5%. 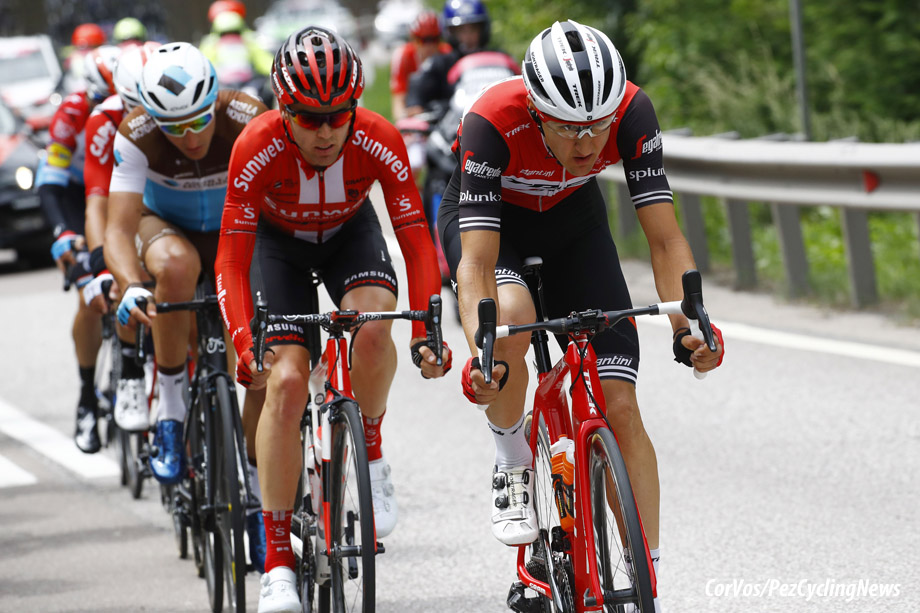 The break split and reformed before Peters made his move

Neilands, Conti and Esteban Chaves did not want to simply give the victory to Peters and started to counter-attack. Although the fight was three against one, the Frenchman did not give up a second. With a nice margin he went under the red flag for the last kilometre, after which the road flattened. Peters had lots of time to celebrate his first pro victory. Chaves rode away from Neilands and Conti and came second at 1:34. Formolo was third. 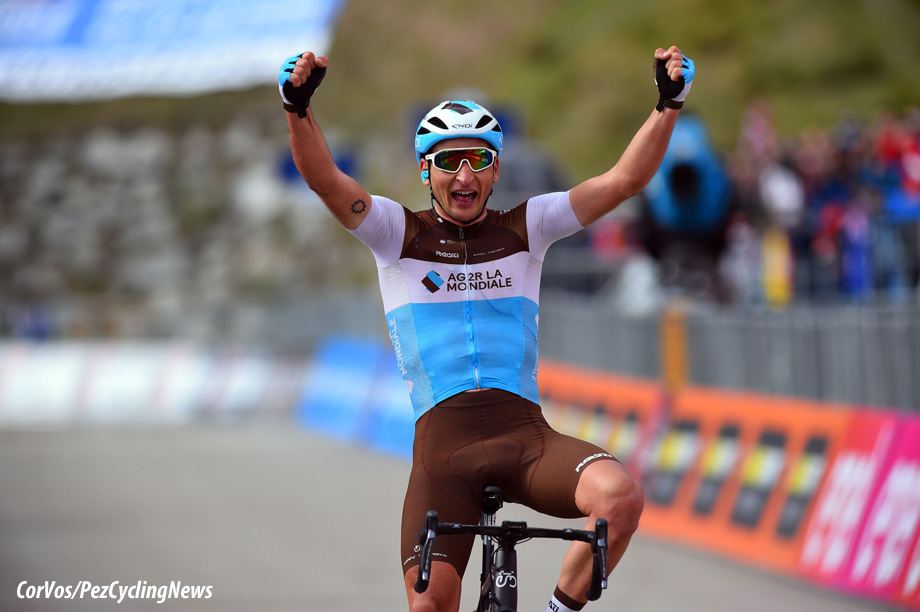 The big win for Peters 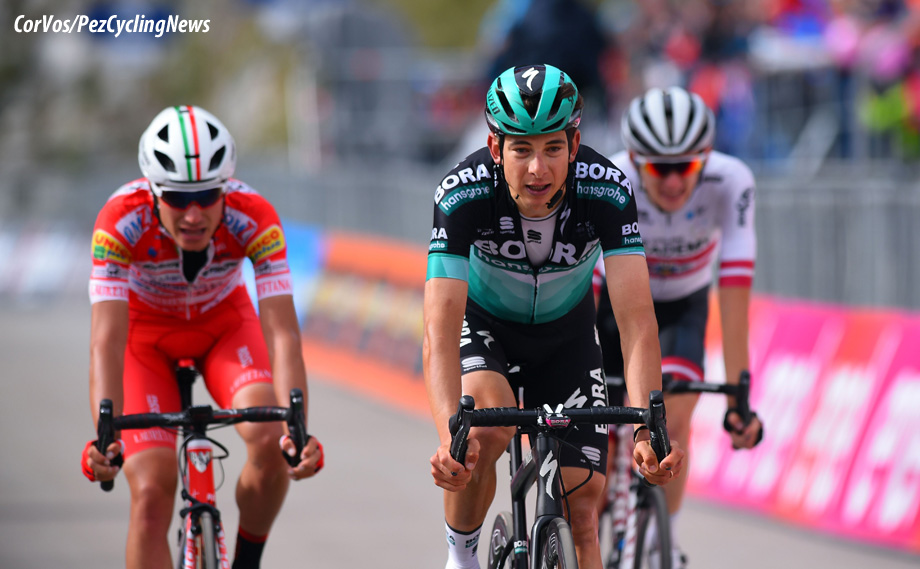 Behind in the peloton the favourites were not taking it easy on the final climb. Rafał Majka, Pavel Sivakov, Simon Yates and Ilnur Zakarin had problems, also Miguel Ángel López didn't look comfortable. Mikel Landa attacked 3 kilometers from the finish and had Hugh Carthy with him. Domenico Pozzovivo set the tempo for Vincenzo Nibali with Carapaz, Bauke Mollema, Primož Roglič and the rejoined López. 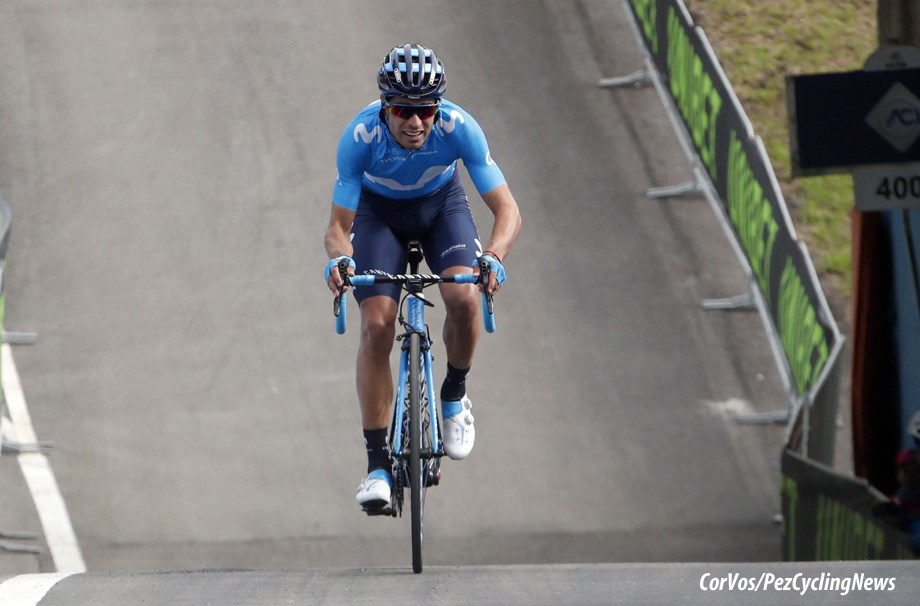 Landa put in a late attack 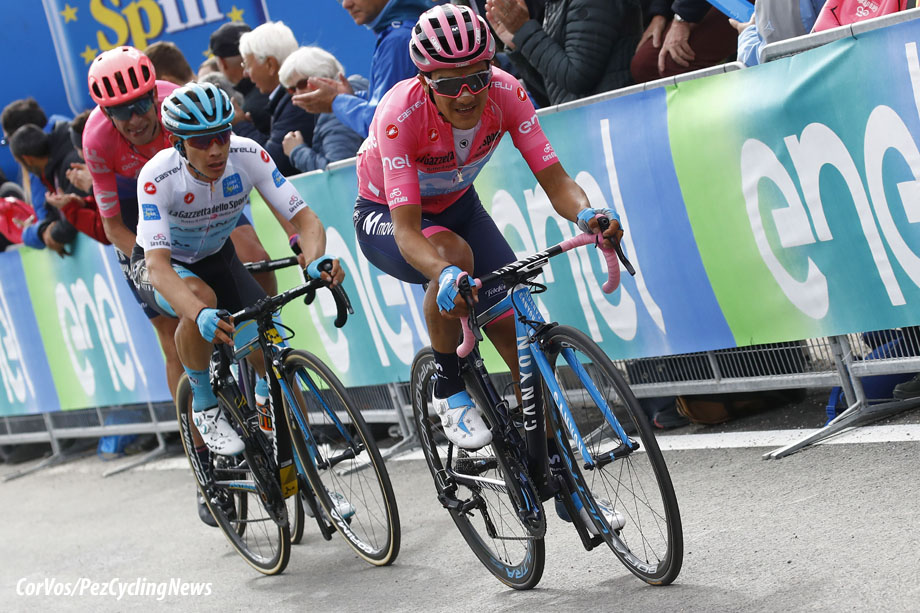 Landa wanted to put time into Roglič in 3rd place, who was only 1:06 in front of him on the overall. When the Spaniard rode away from Carthy, López and Carapaz responded. Landa crossed the line at 4:27 from stage winner Peters. He took 0:12 on Carapaz and López and 0:19 on the group of Mollema, Pozzovivo, Roglič and Nibali. Carapaz finished ahead of Nibali in the classification; the Italian is now at 1:54. 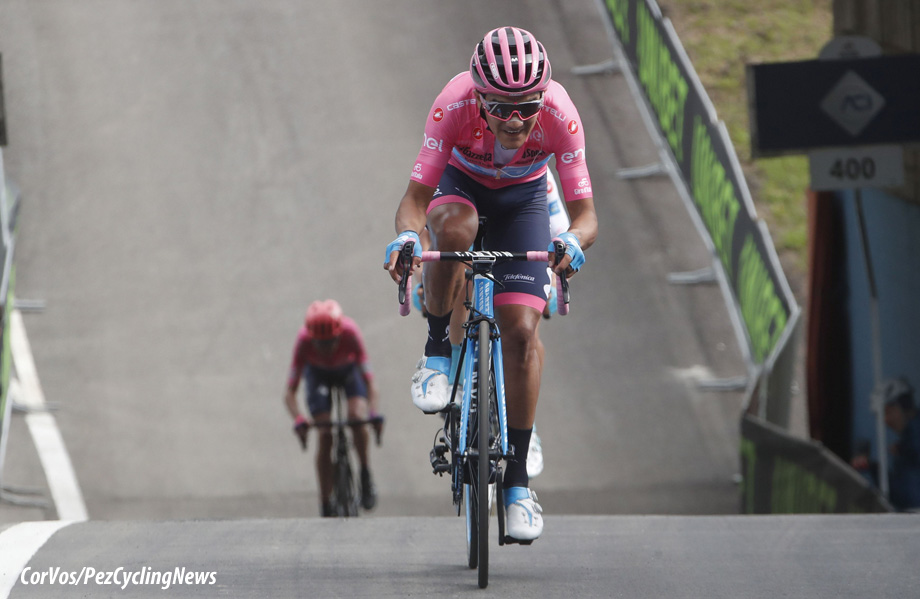 Carapaz took some more time in the finalé

Stage winner, Nans Peter (AG2R-La Mondiale): “It's enormous! My Giro was already a success with the white jersey at half way. It's incredible to get my first pro win in a Grand Tour. In the breakaway, I promised myself to attack only once and the timing proved to be right.” 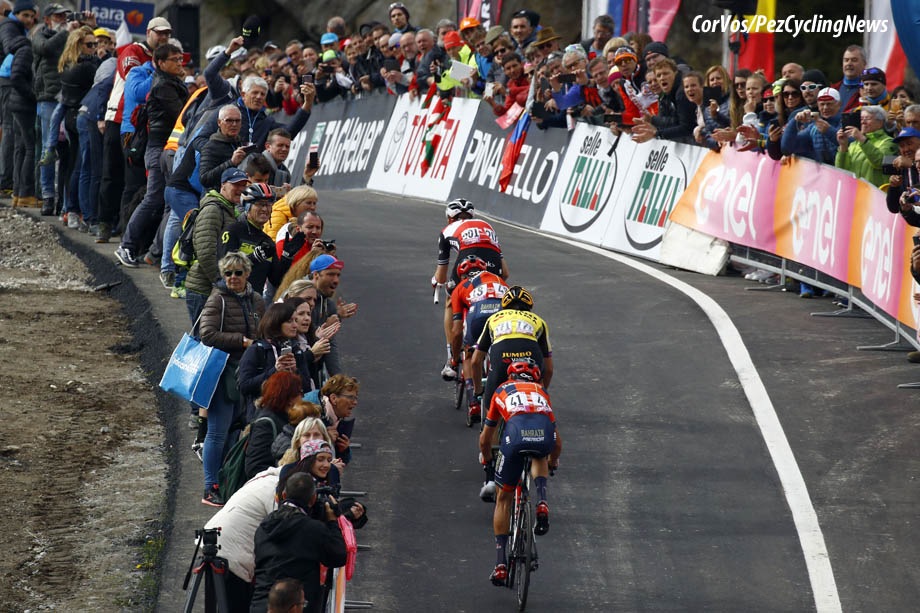 Race leader, Richard Carapaz (Movistar): “Mikel Landa felt good in the finale and decided to attack to gain some time for the final podium. I also felt good and I did my best to profit from Mikel’s attack. I couldn’t have asked for a better 26th birthday than with the Maglia Rosa.” 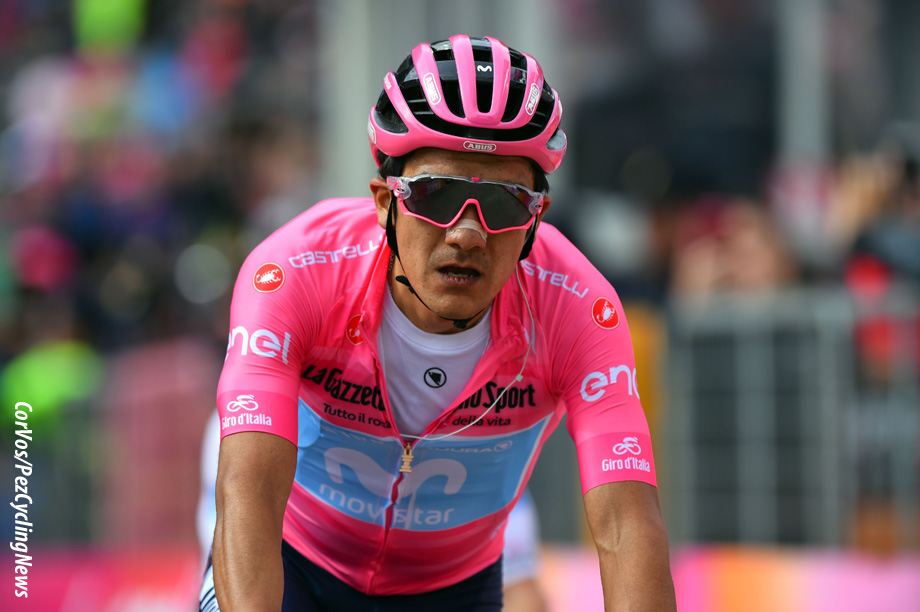 A little bit more time in the bank for Carapaz