Race Report: Giro d'Italia stage 12 turned the race upside down. The stage victory went to Cesare Benedetti. The Italian of the Bora-Hansgrohe team out-sprinted his break-away companions in Pinerolo for his first victory. The pink jersey stayed with the UAE Team Emirates team, as Jan Polanc finished 6th at 25 seconds to take the GC lead. 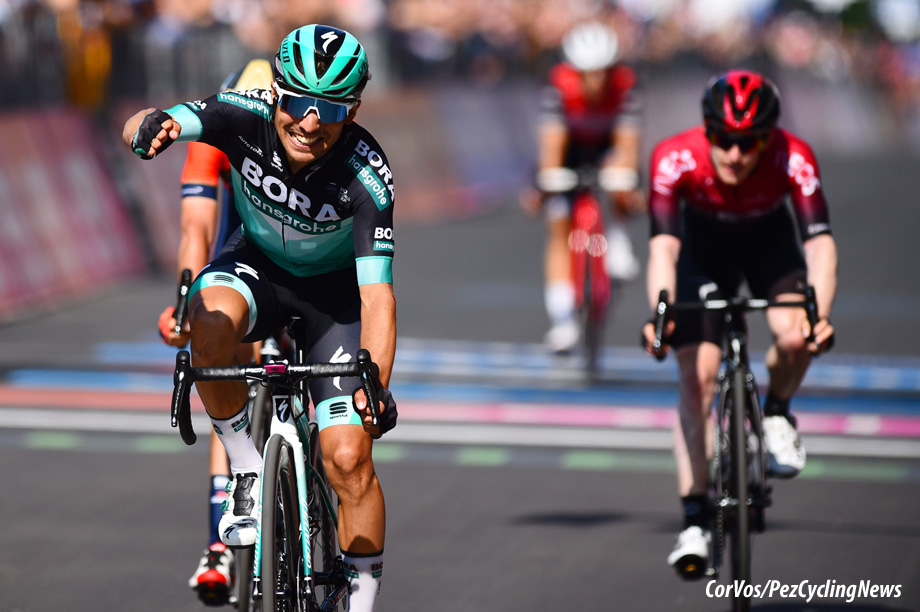 At last the 2019 Giro is finally in the mountains. On the twelfth stage, the riders did not ride over the highest mountains, but the Montoso is a Cat 1 climb.

The start in Cuneo

Exactly seventy years ago, the legendary Fausto Coppi managed a famous solo between Cuneo and Pinerolo. A large part of the peloton certainly hoped to follow in the footsteps of the Italian champion, although such a solo victory seemed a bit too much. Although Lotto Soudal's break-away specialist, Thomas De Gendt, was keen on giving it a try. 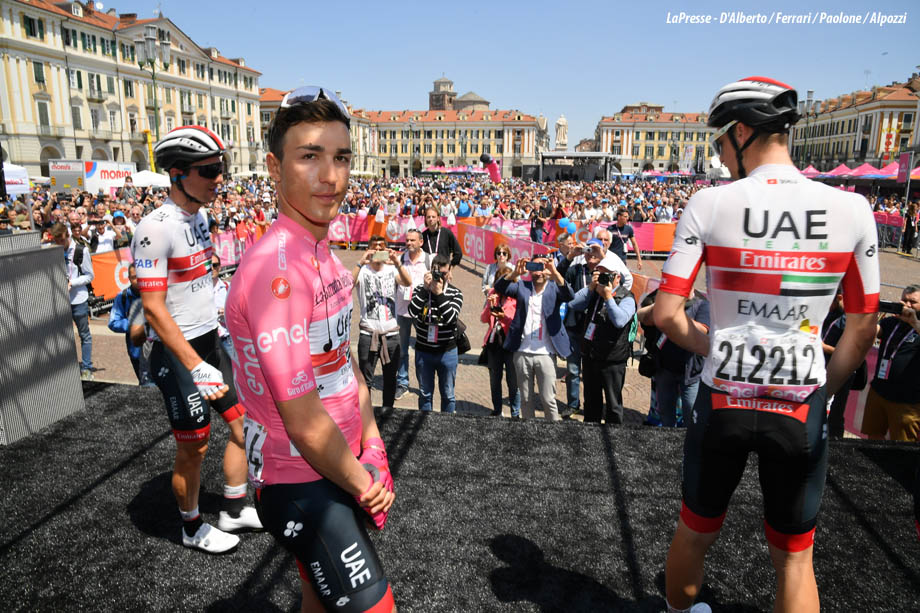 Last day in pink for Conti

Route:
Stage 12 – Cuneo-Pinerolo 158km - total elevation 1,650m
The stage is hilly and overall intense. After approximately 90km, the route enters the city to take a first pass of the “muro” (or wall) of via Principi di Acaja, and to crest the first category-one GPM (KoM) of the 2019 Giro. This climb is new to the race, with slopes at 9.4% for 8.9km (with gradients exceeding 10% for over 6km, and topping out at 14%). After a fast running descent, Pinerolo is 16km away. 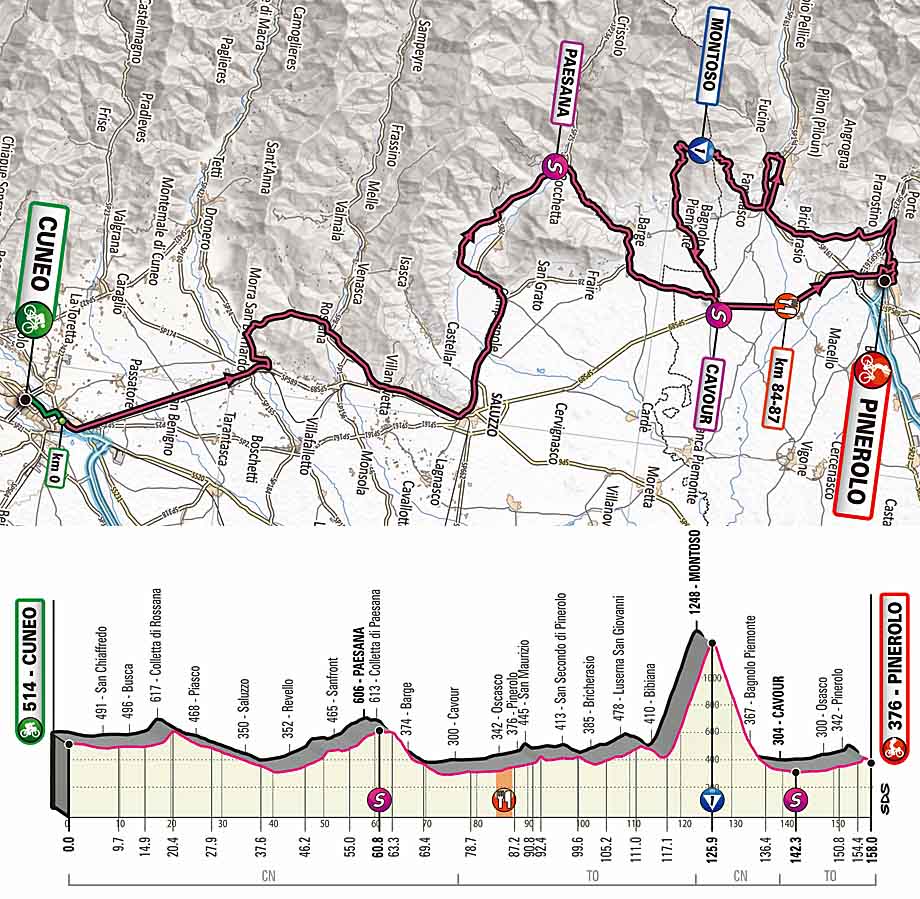 Final kilometres
2,500m before the finish, the route takes a sharp left-hand turn and climbs up the narrow Via Principi d’Acaja (450m with an average 14% gradient and peaks of 20%, on road pavers). Next is a steep and harsh descent leading into Pinerolo. The last 1,500m are on level roads, with just a few bends and a short stretch on stone-slab paving. The finish line sits at the end of a 350m long home stretch, on 8m wide tarmac. 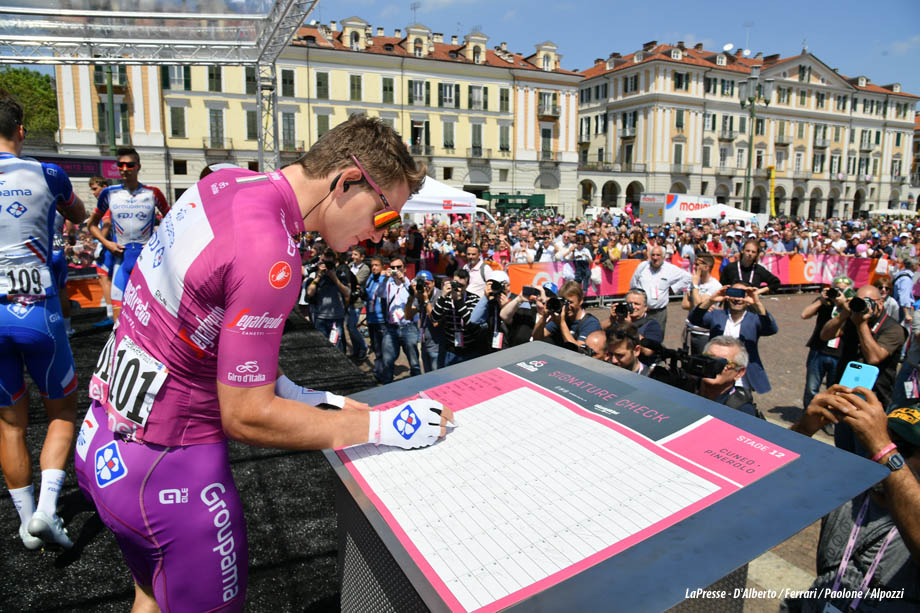 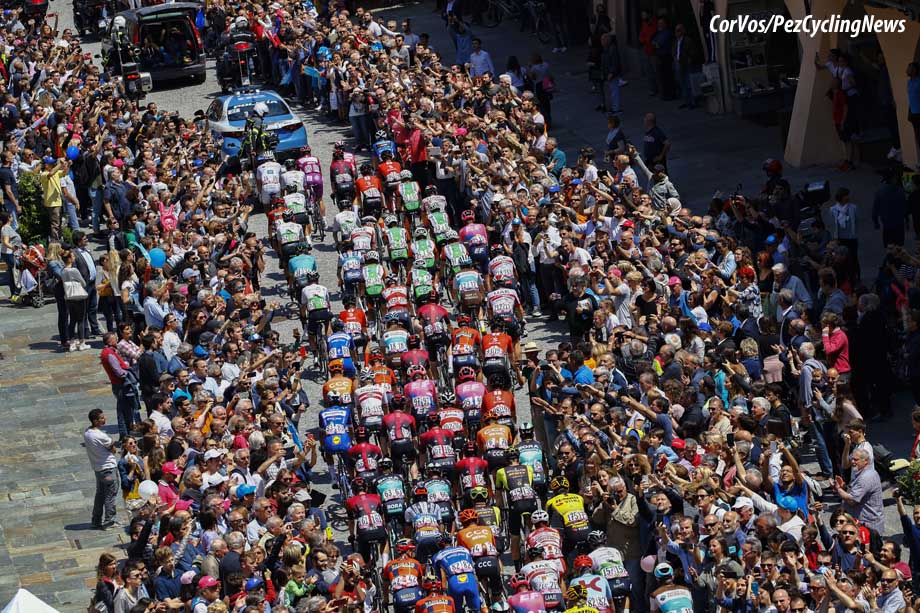 Soon after the start De Gendt went on the attack, he was joined by Eddie Dunbar, but this pair were soon caught up by a large chasing group. The peloton thought the combination was good and so they soon gained time. 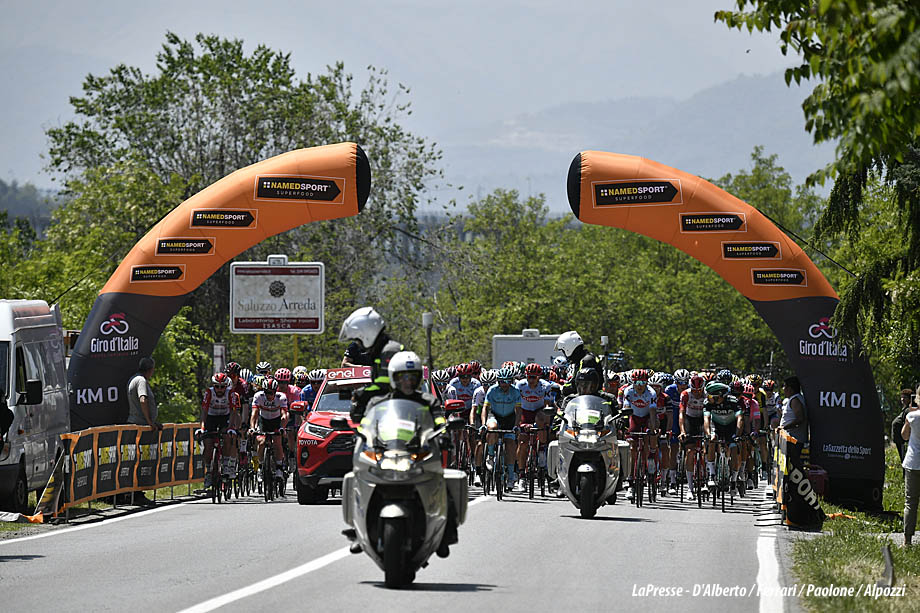 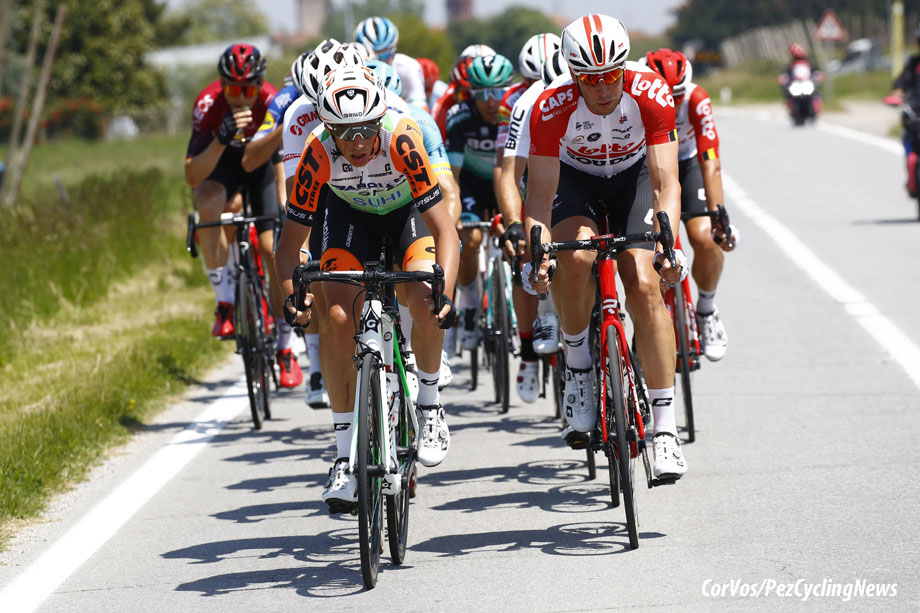 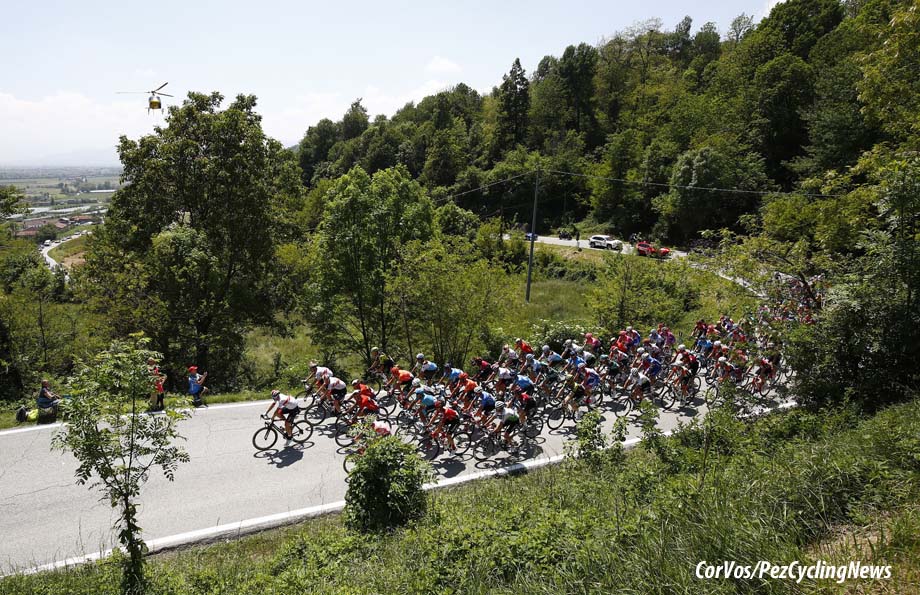 The break hit the particularly steep Via Principi d’Acaja (500 meters at 13.2%), a short cobbled climb that was also in the final, with 66 kilometres to go, Bennett and Haller attacked. On the Montoso (8.8 km at 9.5%), the first real climb of this Giro, the break had a good lead. The nervousness increased in the peloton as Mitchelton-Scott and Jumbo-Visma did not want to give Polanc, a good climber, too much advantage. The difference was reduced to 13 minutes on Bennett and Haller, who started the Montoso first, but the pursuers were not far behind. 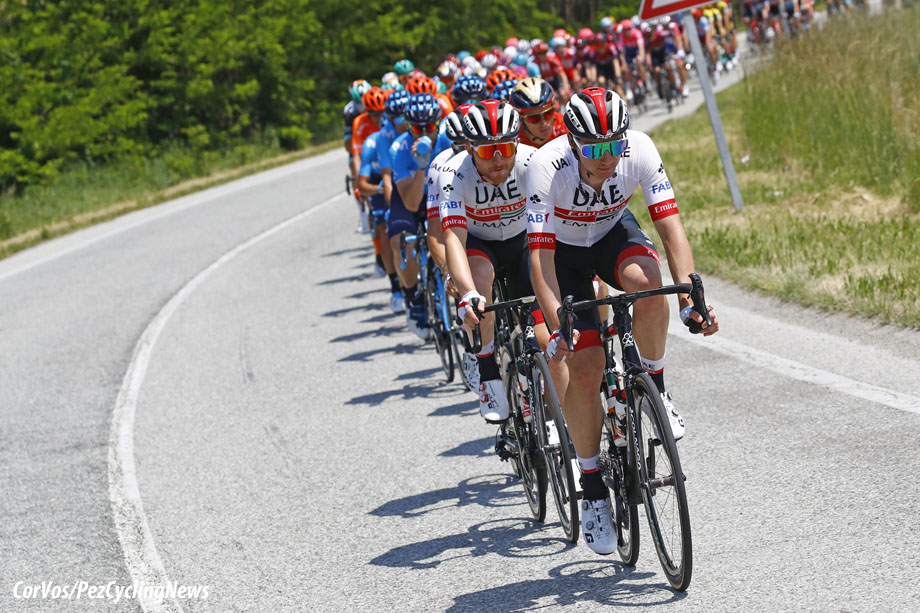 It took a while for the two up-front to be caught, as the chasers looked at each other. On the steepest ramps the climbers started to accelerate. Brambilla, Capecchi, Dunbar, Caruso and virtual leader Polanc managed to catch the two leaders... and drop them. De Gendt could not follow and was left behind with Bakelants and Vervaeke. It was Brambilla who was the first over the Montoso summit, followed by Capecchi, Dubar, Caruso and Polanc. 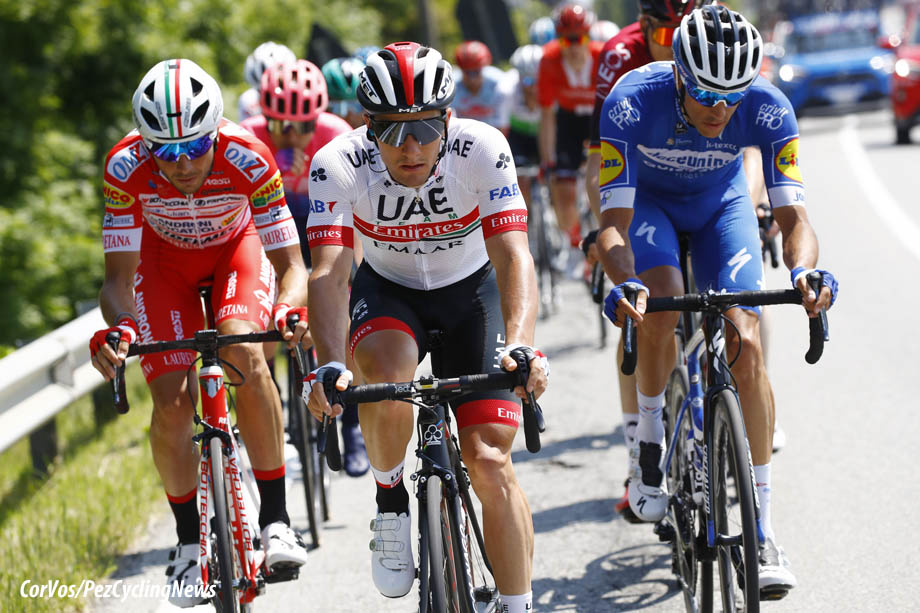 The five leaders were on the descent of the Montoso, as the favourites were still climbing. Miguel Ángel López and Mikel Landa attacked. The two climbers managed to ride away with ease, while Primož Roglič, Vincenzo Nibali and Simon Yates remained together. López and Landa managed to go further and further away. The chase group consisted of 15 riders, including: Bob Jungels, Davide Formolo, Sam Oomen and Conti ... All good climbers, but they could not follow the pace. Rafal Majka and Nibali jumped just before the summit, but the other favourites managed to rejoin and so there was an elite group at the summit. 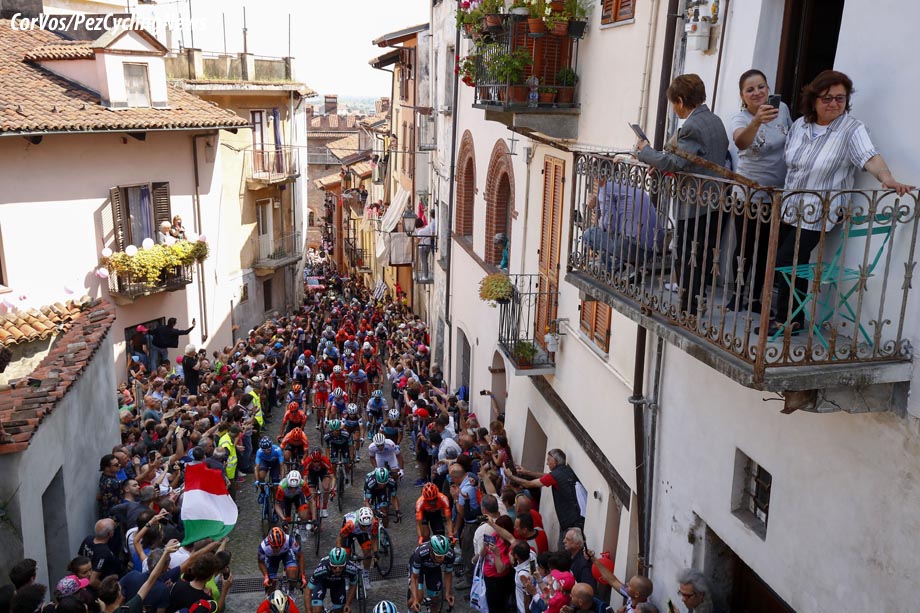 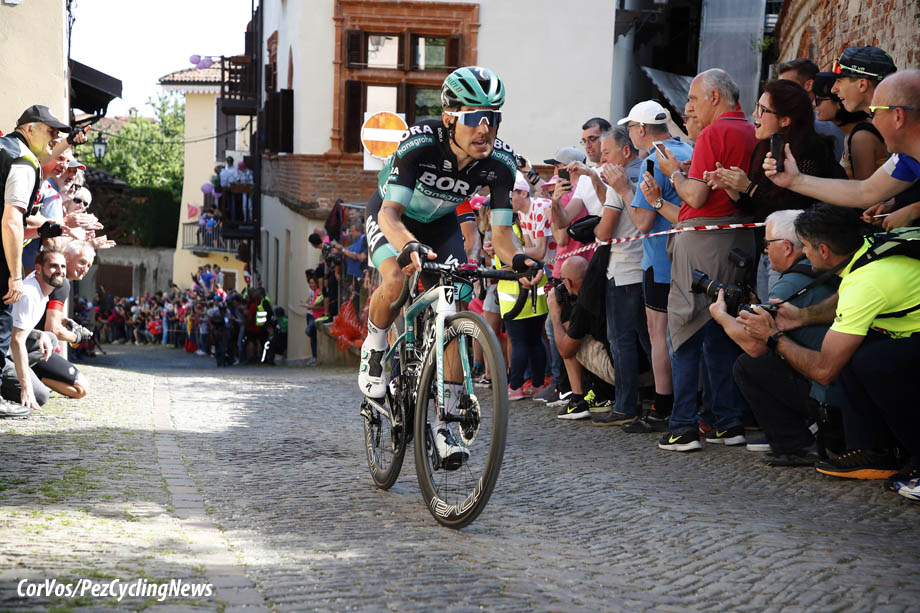 López and Landa were still ahead of the other GC riders and got some help from their teammates Boaro and Sütterlin, from the break, on the descent. The nine chasers: Roglič, Yates, Chaves, Nibali, Majka, Tao Geoghegan Hart, Carapaz, Kangert and Hamilton - had to work hard to limit their loss. 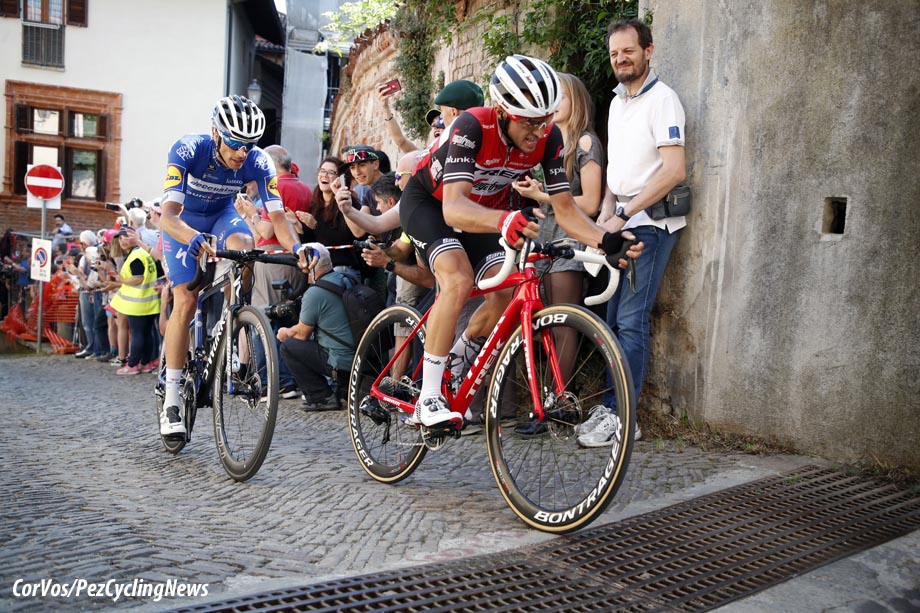 These nine top men received some extra help in the last 10 kilometres from a chasing group including Bauke Mollema and Ilnur Zakarin. The group worked hard to keep Landa and López close. The leading group was now made up of eight riders. 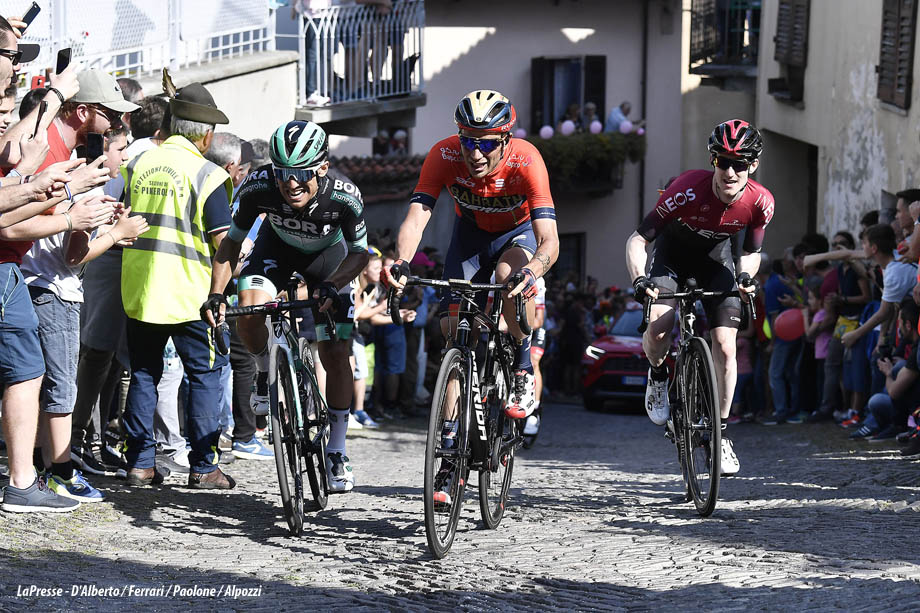 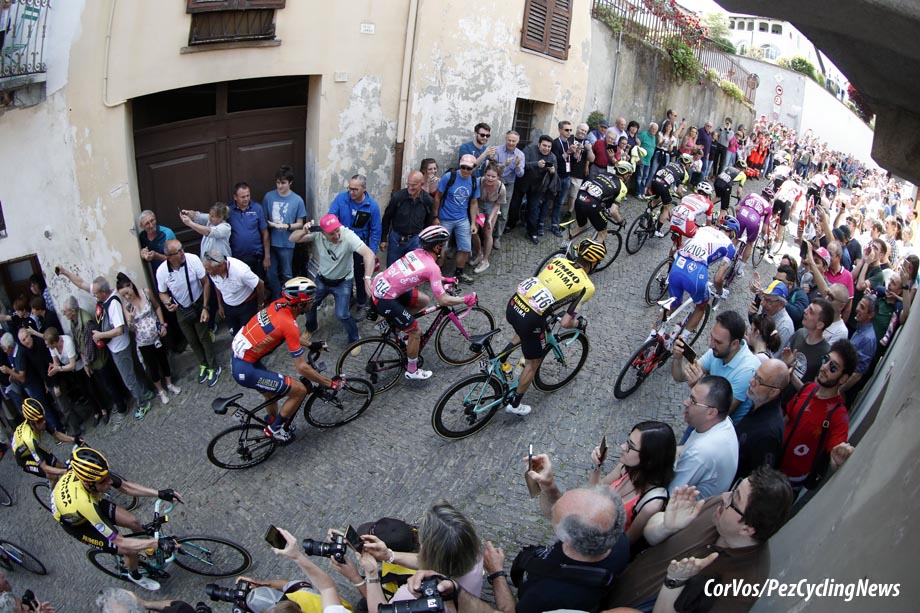 Cataldo, Benedetti and Montaguti managed to return to the front group and the stage would be decided on the Principi d’Acaja. It was Brambilla who tried for the win, but it was Capecchi who stuck to his wheel. After the summit, Dunbar also managed to cross to them followed by Benedetti and Caruso. Benedetti was by far the fastest and took his first professional win. Polanc - sixth on the day - captured the pink jersey. After Benedetti's win, Landa and López crossed the line with a time advantage on their main competition. 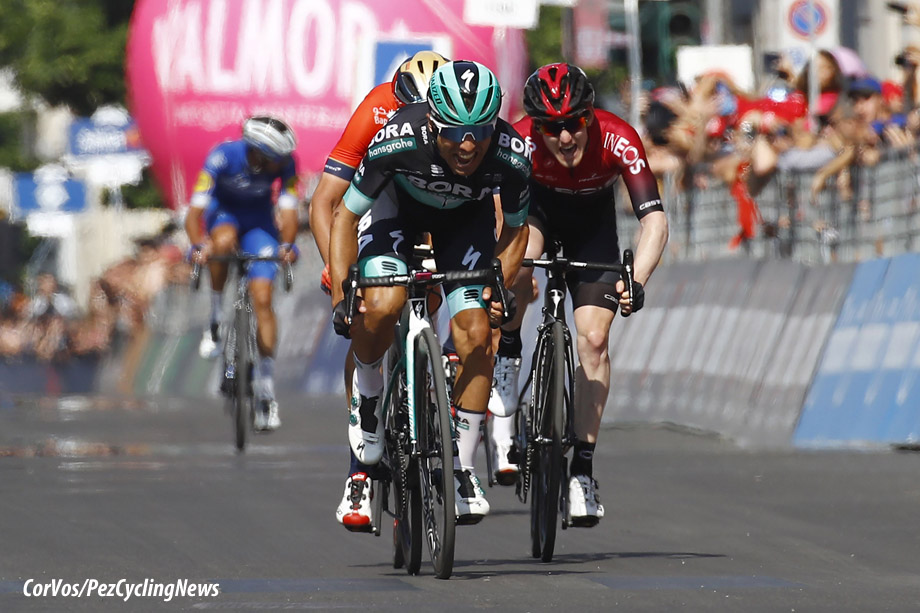 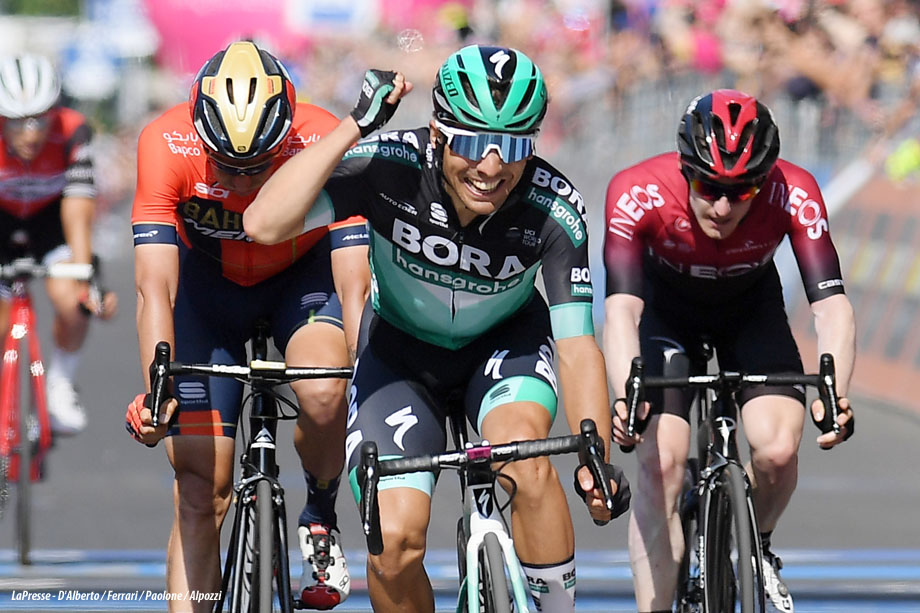 Stage winner, Cesare Benedetti (Bora-Hansgrohe): “I've worked a lot for the others in the past but today I got my opportunity. I'm not a talent, I'm not [usually] a winner. I lost contact in the final climb but I knew the three guys at the front would look at each other. The way I finished it off is exactly what I wanted to do.” 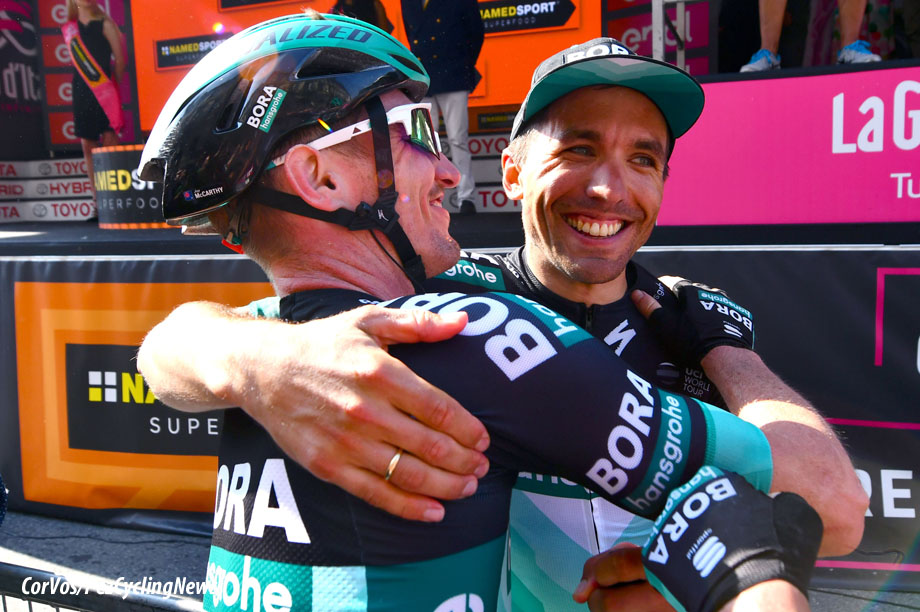 New race leader, Jan Polanc (UAE Team Emirates): “It was a team tactic that I'd go in the breakaway so we could have a better control over the race. It was also a way to keep the Maglia Rosa in the team. We were lucky to be able to play these cards and I'm very happy to have the jersey. I was thinking about the stage win as well but being the virtual leader I had to pull a lot more than others.”