Roadside PEZ: Stage 2 of the 2020 Volta a la Comunitat Valenciana finished only an hour away from our man in Spain, Alastair Hamilton, so we had to send him to the coastal town of Cullera to take in the action. 181 kilometres from Torrent to the summit finish in Cullera, the final 3 kilometres rises 173 meters to the line. 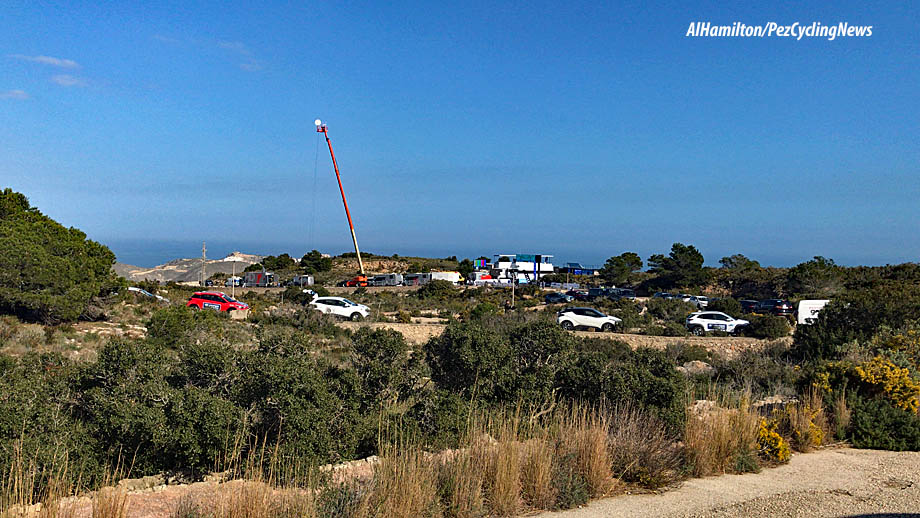 The finish line was high above the costal town of Cullera, but an even higher TV transmitter dish was needed

A fast drive north of about an hour took me to Cullera, which is a fairly normal coastal town in the winter, but a holiday resort in the summer with large hotels next to the sandy beach. 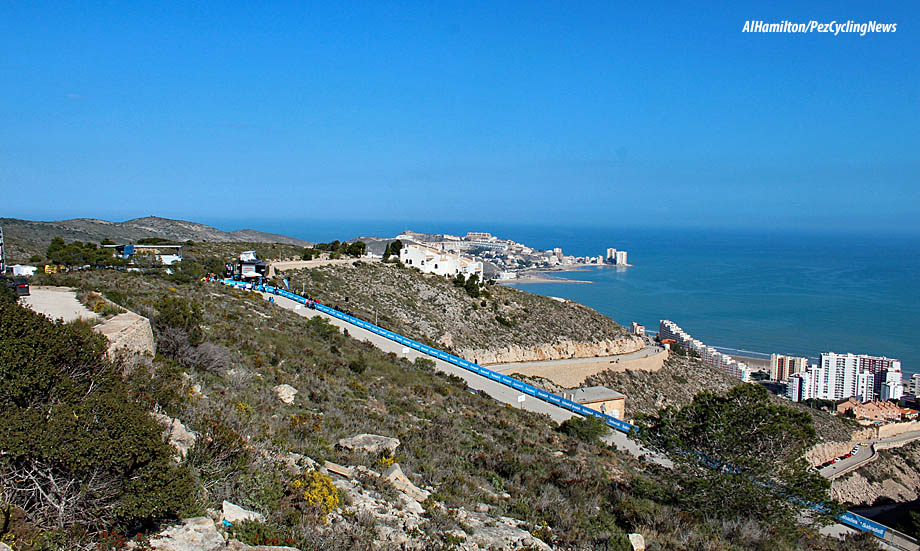 It was only a 2K climb, but it was expected to cause some fireworks

The stage 2 finish was on a short, steep climb on the edge of the town up to a weather station next to the old castle, and was bound to cause changes in the overall. 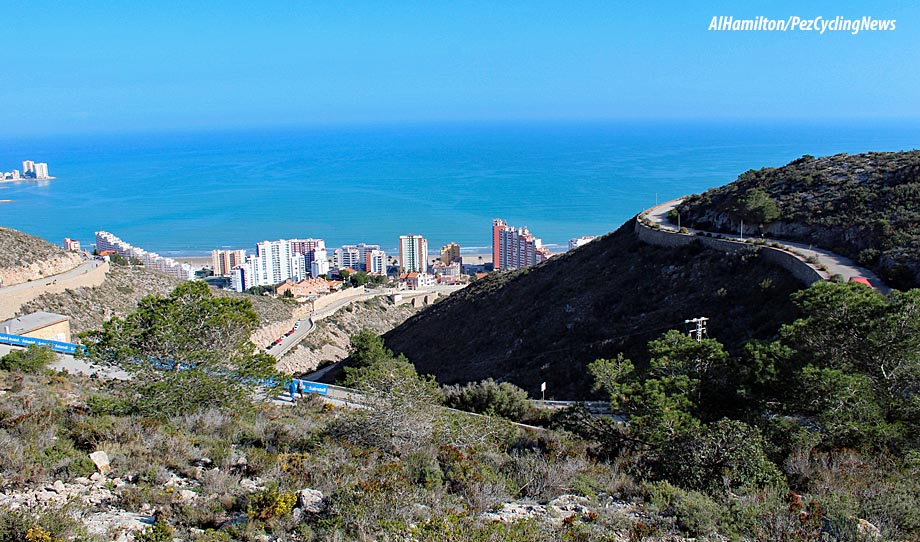 Glad I didn't have to walk up!

Here is my choice of photos from the finish. 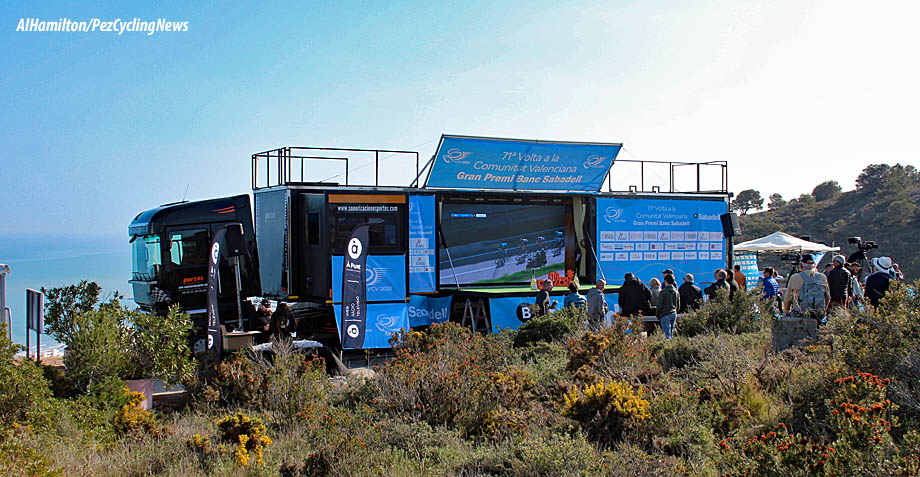 Not much room for a podium, but they managed to squeeze one in 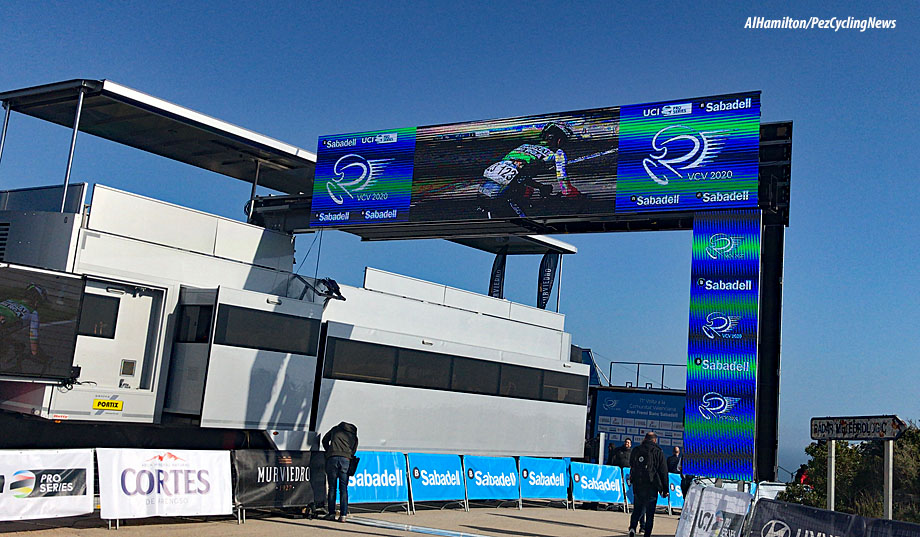 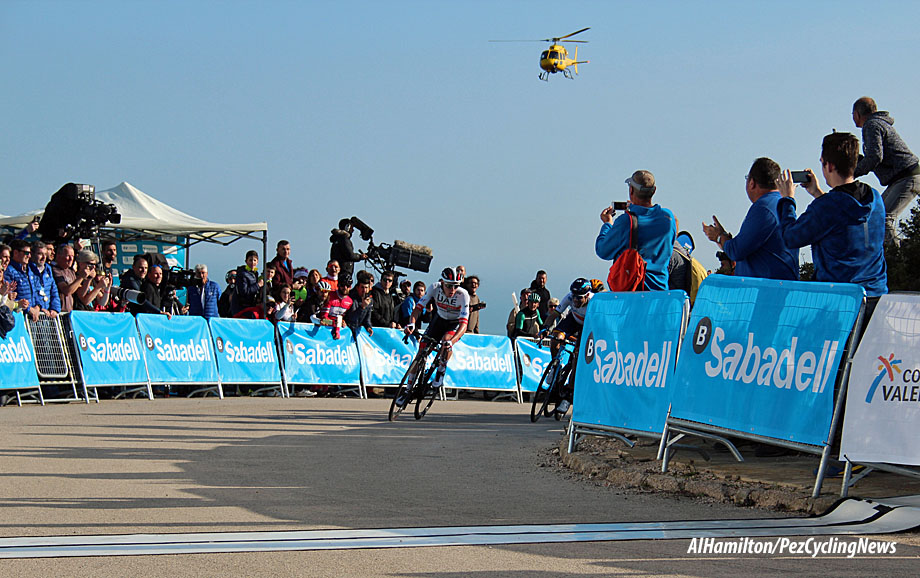 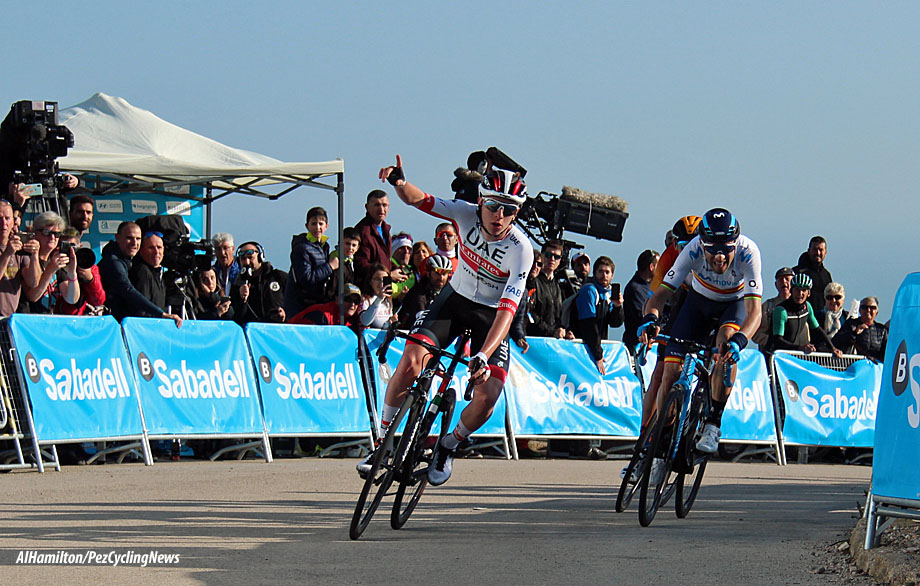 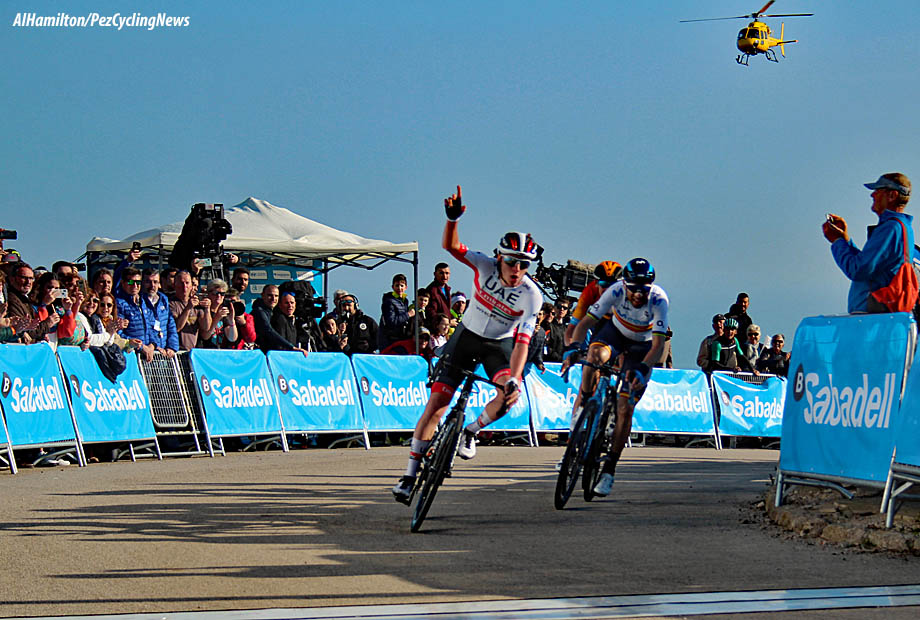 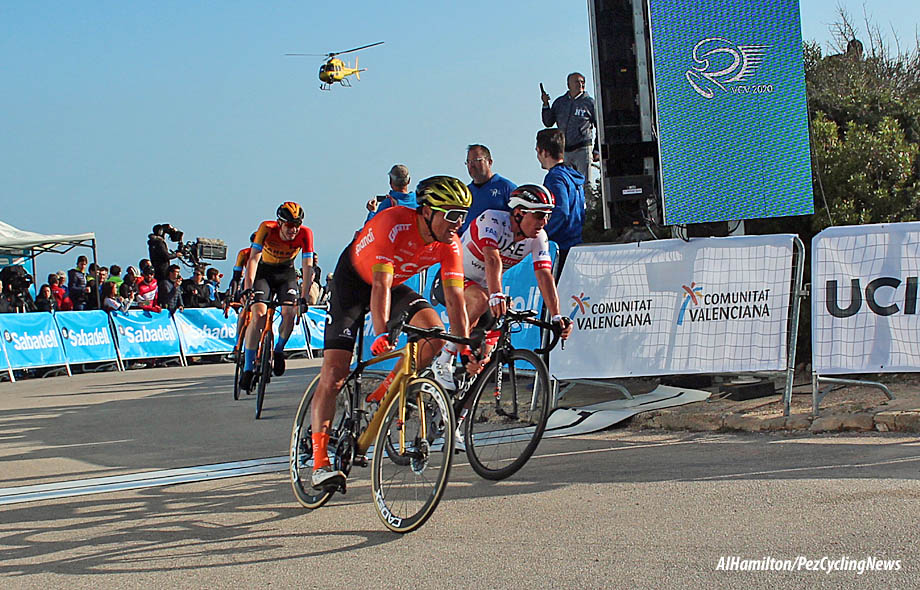 Van Avermaet had his climbing legs 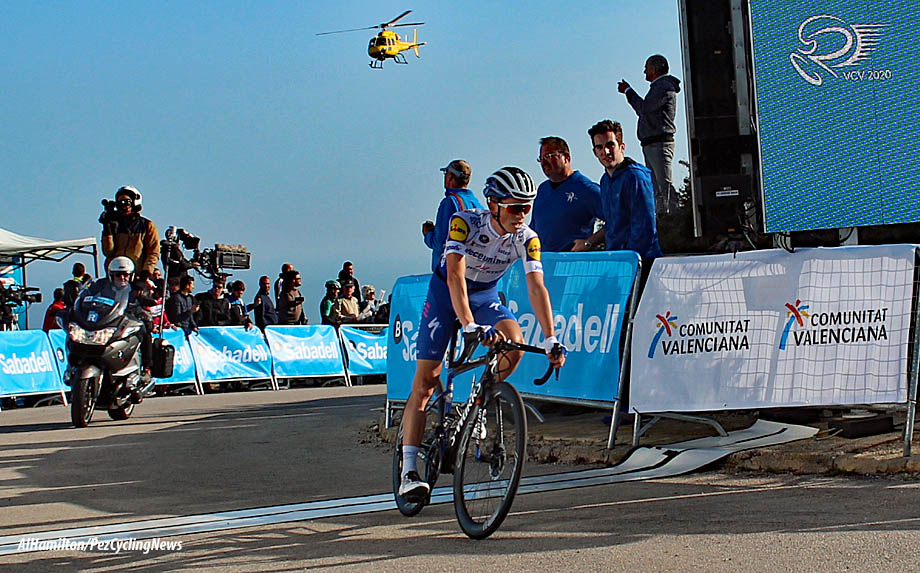 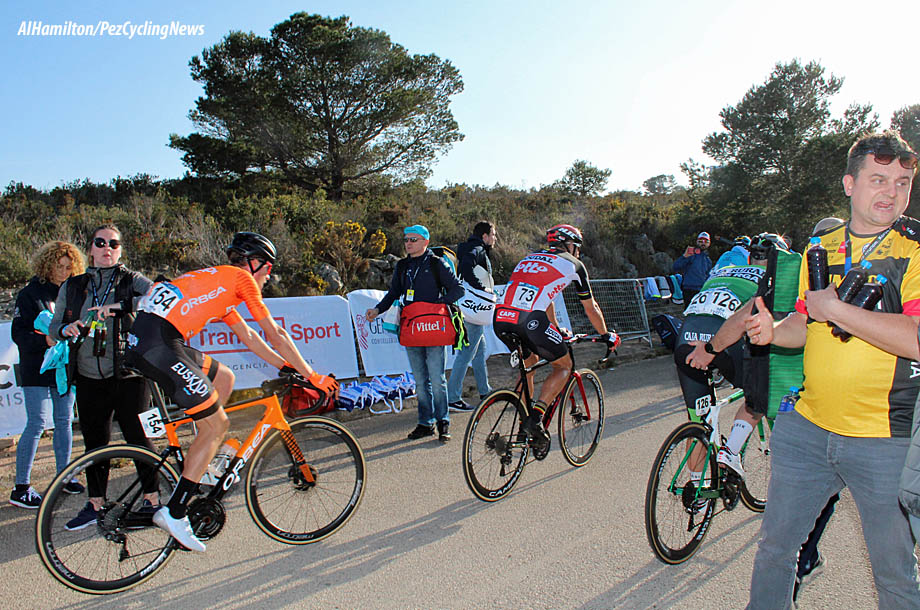 The usual chaos just after the finish line 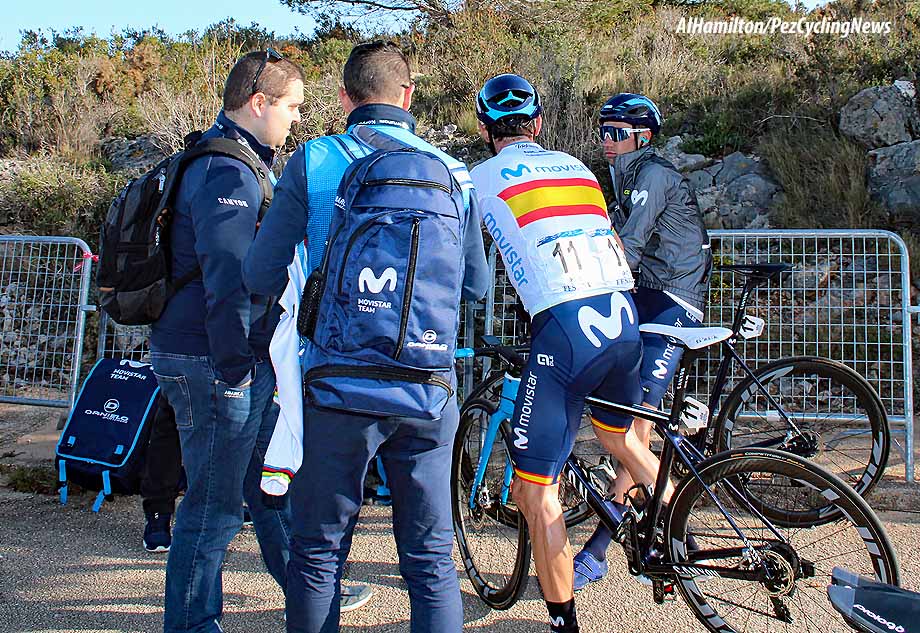 Valverde was very close to the win 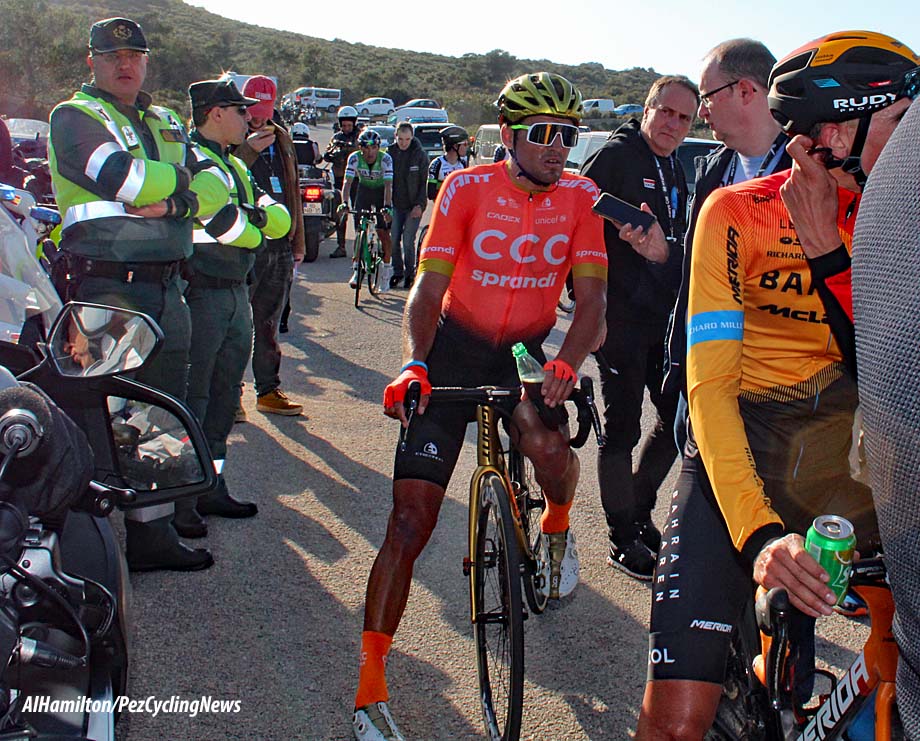 Interviews for Greg Van Avermaet - 10th place with the climbers 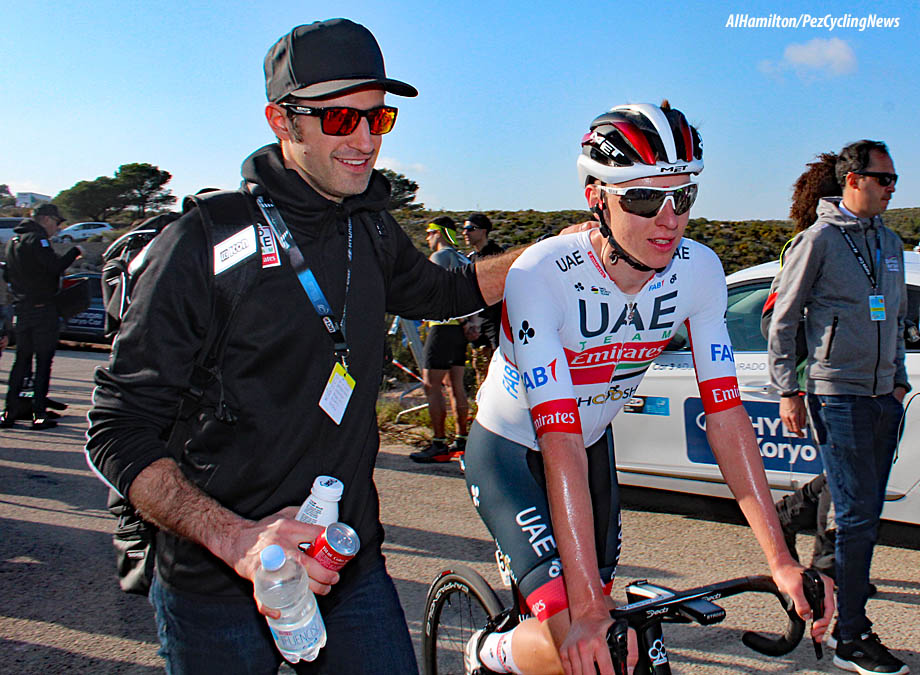 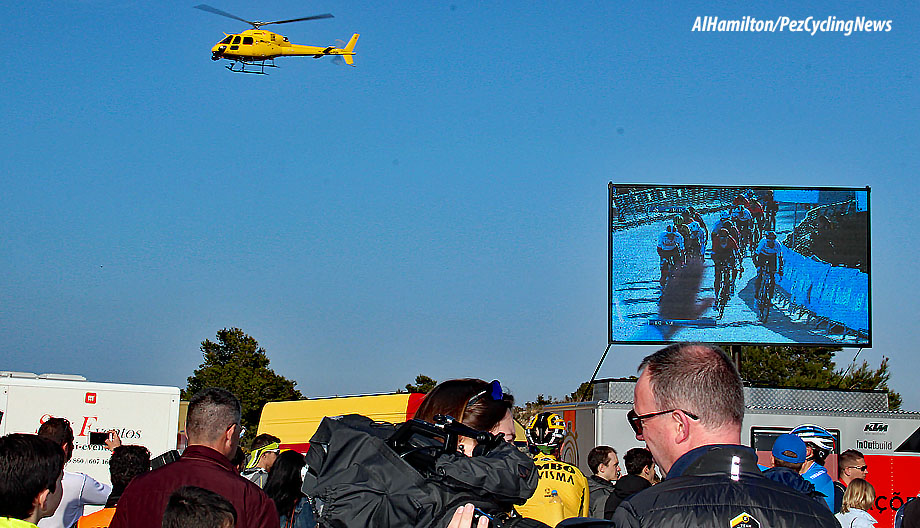 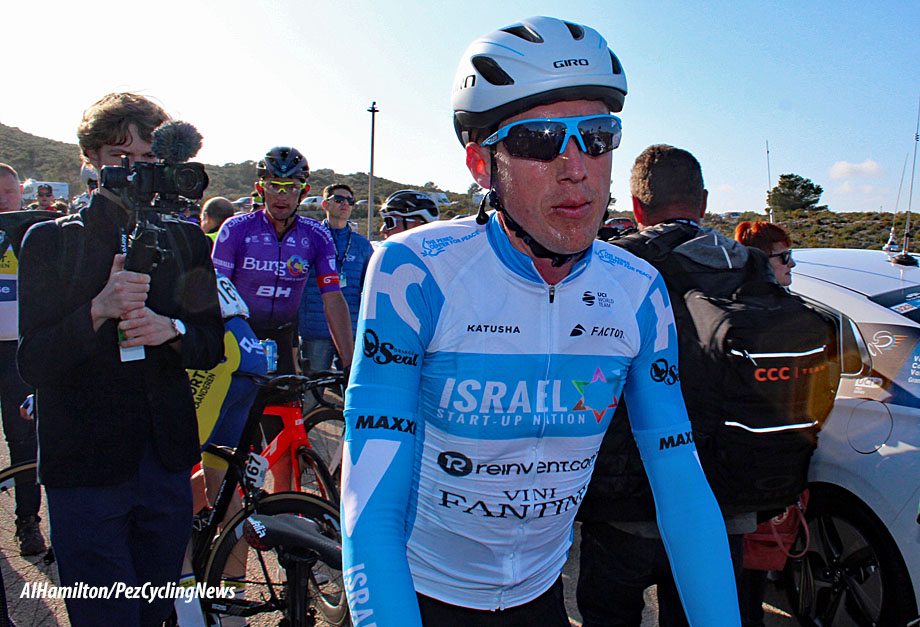 A good finish for Dan Martin in 4th place 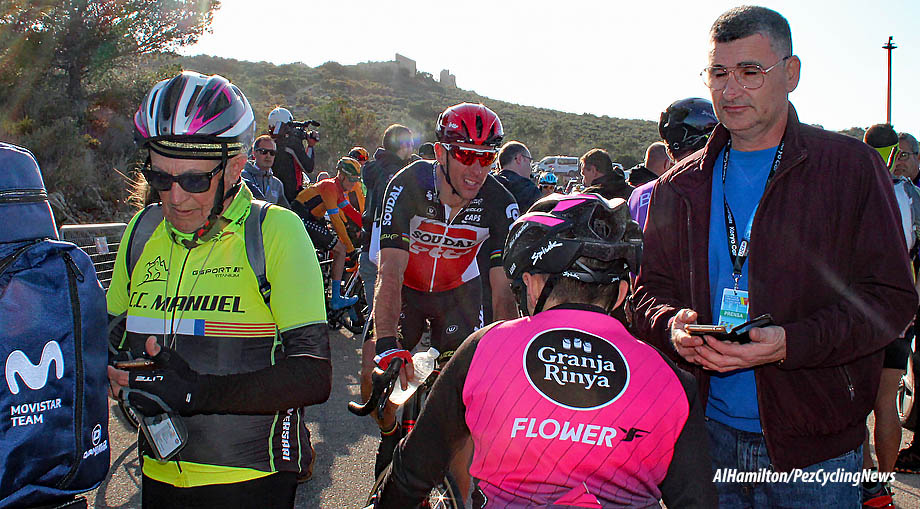 Philippe Gilbert had to find his way through the crowd 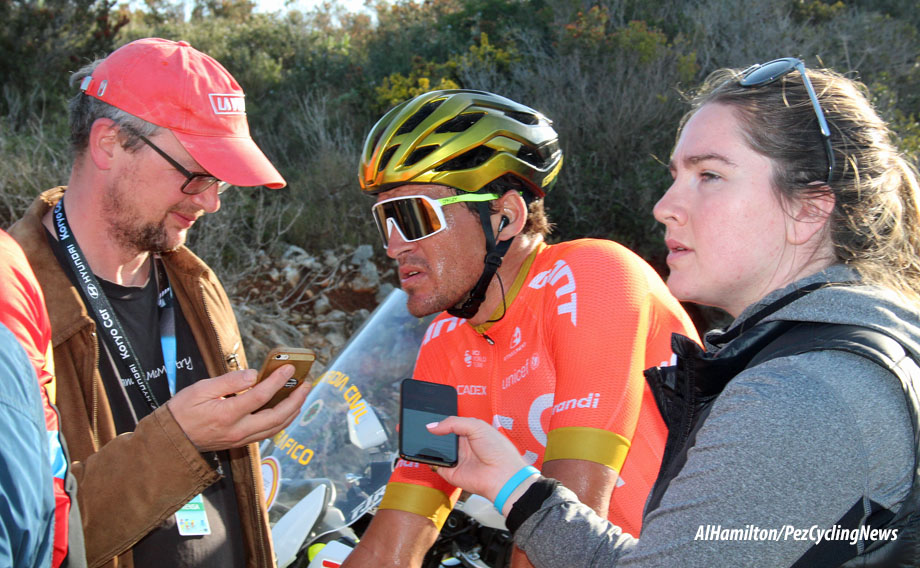 More interviews for the Olympic champion 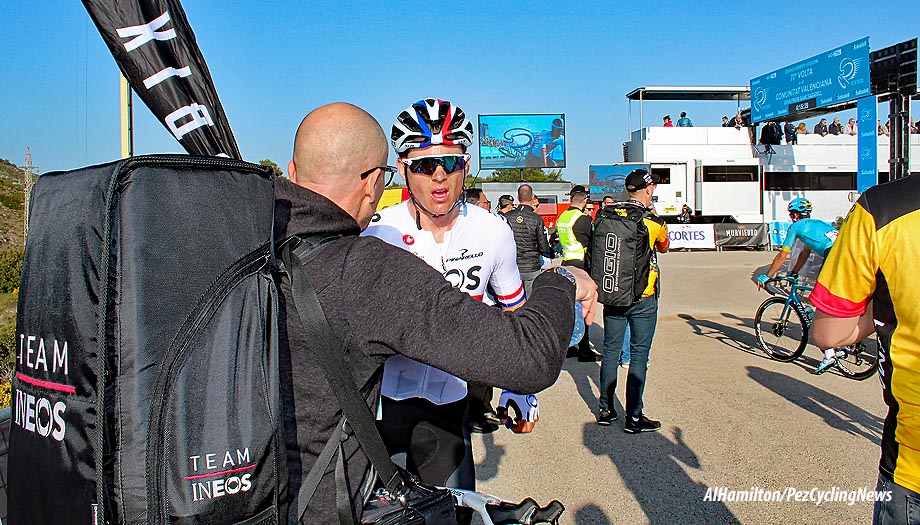 Alessandro De Marchi had been riding hard in the break all day, but they were caught before the final climb in Cullera - PEZ interview up soon 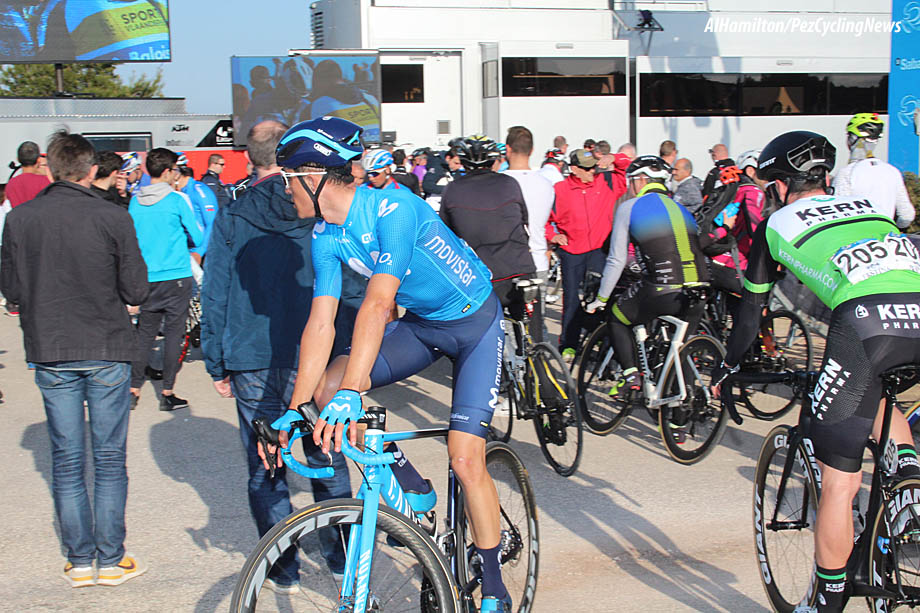 The heavier, non-climbing rider were still coming in 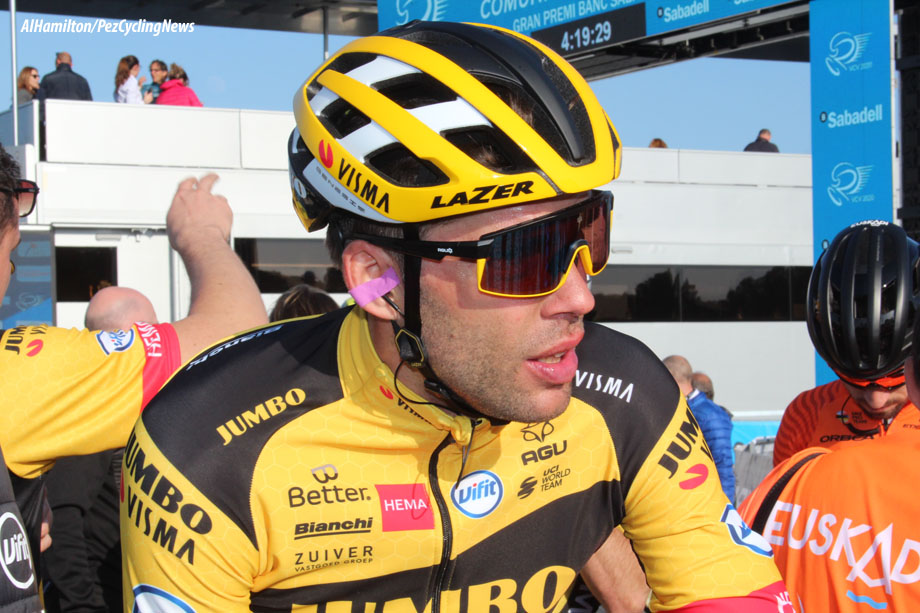 It was a hard day for Pascal Eenkhorn and his Jumbo-Visma team. Groenewegen lost the overall lead, which was expected, and the team lost Tobias Foss with a broken collar bone 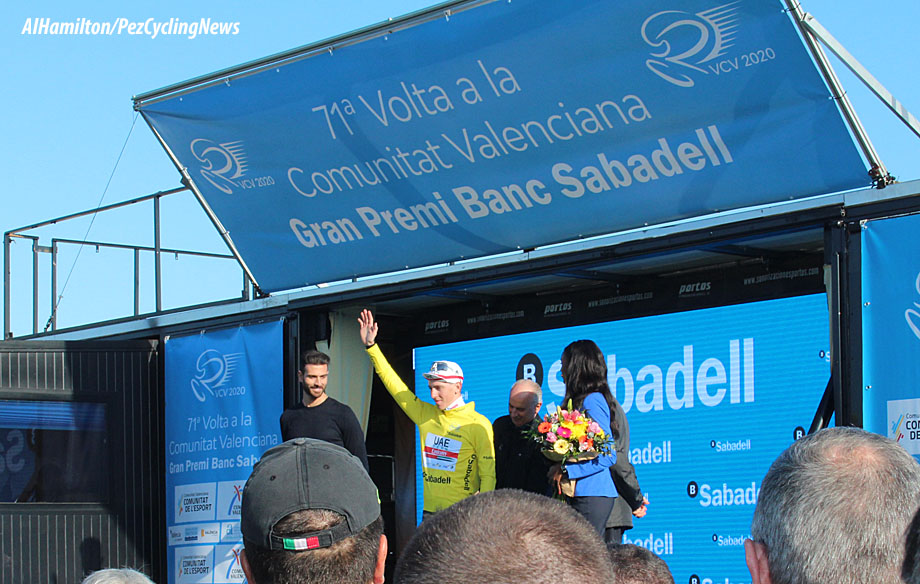 Yellow jersey for Pogačar... and all the other jerseys 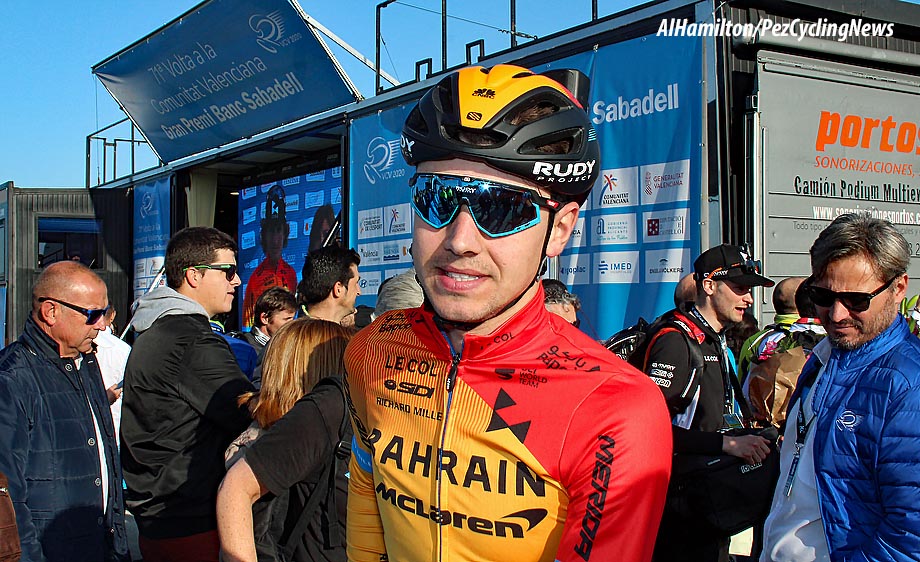 The team prize for the day went to Bahrain-McLaren and young Dutchman, Kevin Inklaar was up on the podium. He crashed on Friday, but good to go on Saturday

More from Valencia on stage 4 - The Queen stage - on Saturday.