Photo Gallery: From last week's World championships in Yorkshire, PEZ photographer, Heather Morrison has moved south to take in a week of Italian autumn one-day Classics. Heather will be doing the full week through to the Giro di Lombardia on Saturday, but first up is the Giro dell’Emilia. Take it away Heather... 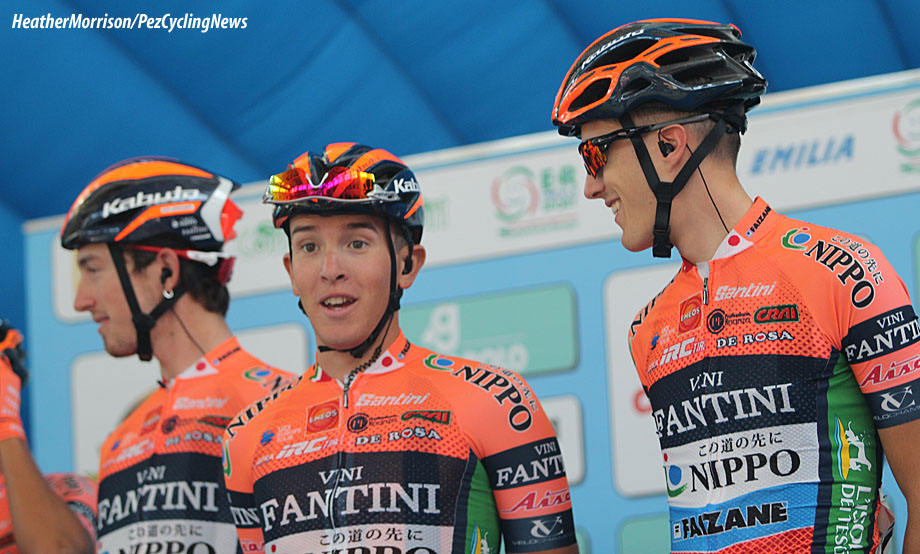 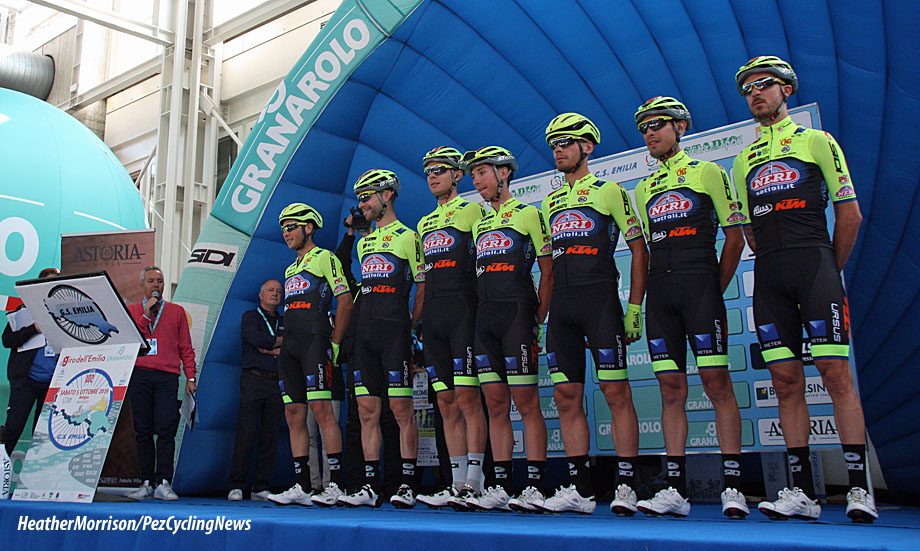 Up early in the morning and off to Bologna. It was about a 90 minute drive as I had been the day before to pick up the accreditations for the weekend's races. I got there nice and early just as an Italian Conti teams rocked up. So plenty of time. Things seem to be working out, so I wonder what will be todays downfall... The new harness I got for the cameras, I'd forgotten the hook on a camera that I left in UK. So one camera on the harness and one I have to carry. If that’s the only thing to go wrong this morning – I'll be happy. 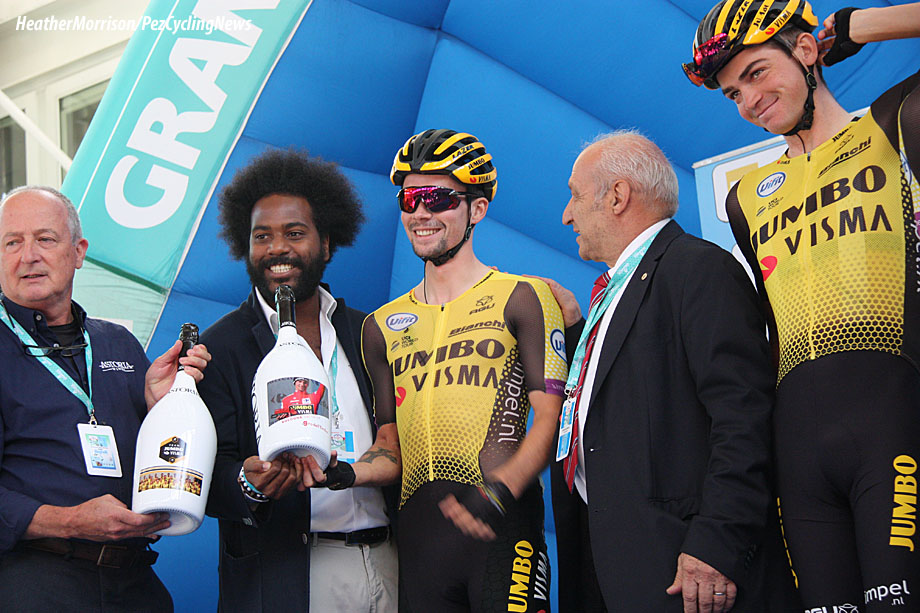 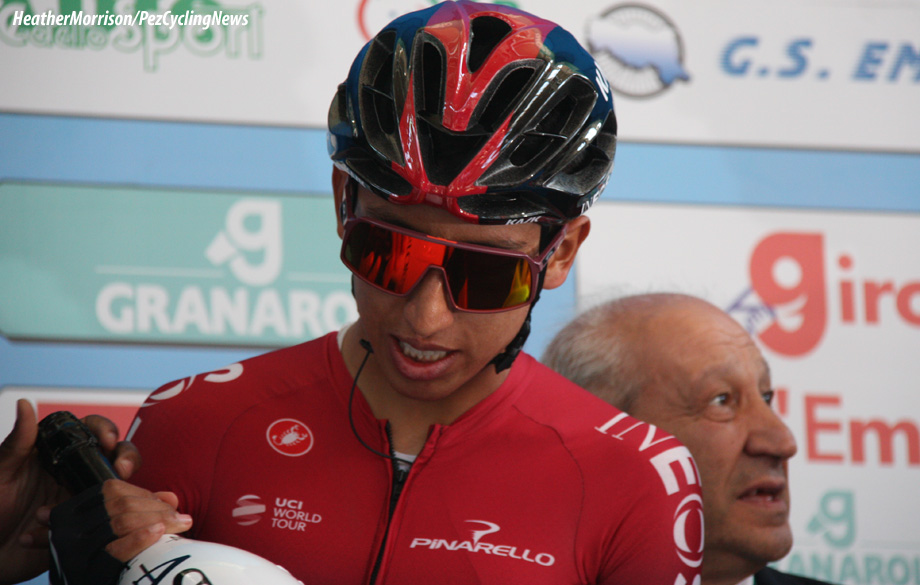 Bernal asks: 'why am I getting Champagne before the race' 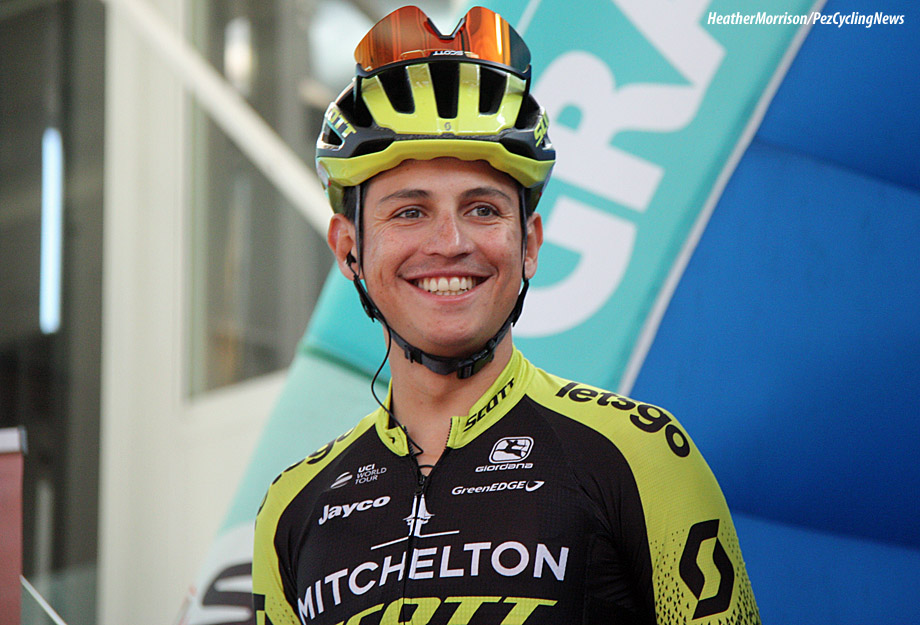 I catch the Men's sign-on and start, the women started a bit later and I thought I would catch some of it, but it was too far away. The men got off without a hitch, I saw my old friend Giovanni Visconti and he asked "what was I doing here and was I here all week?" Yes, I was officially stalking him. I asked if he was okay after the rain of the Worlds and he said he felt fine, maybe I jinxed him, as he was unable to finish due to stomach issues. 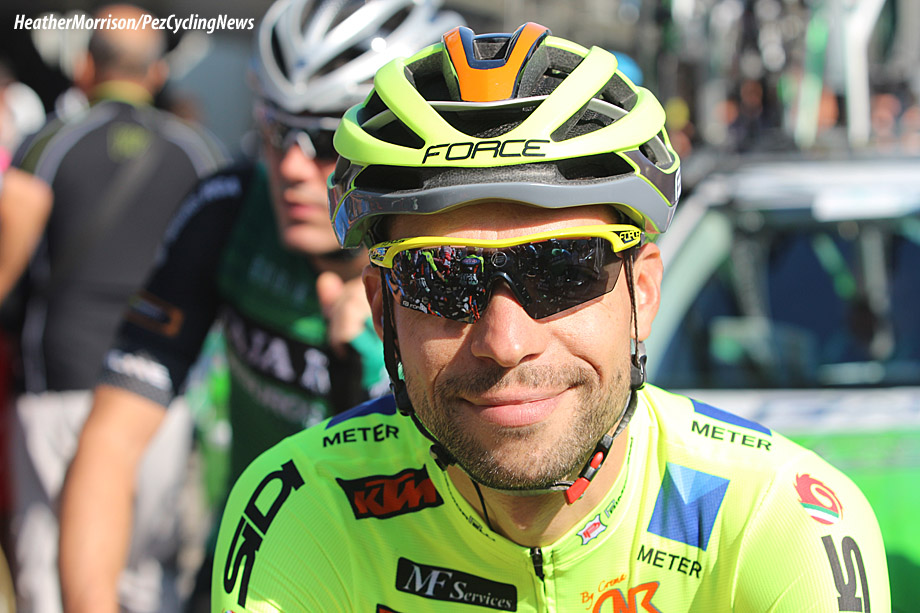 A smile at the start 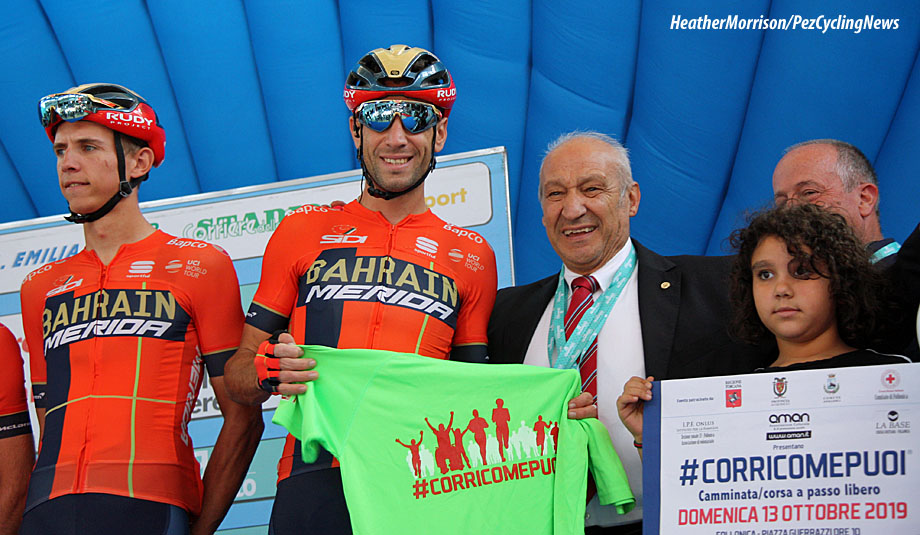 Lo Squalo got a T shirt

Nibali and Roglic seemed to be on good form at the sign-on, smiling and having selfies with fans, you can tell though that sometimes it is all too much. 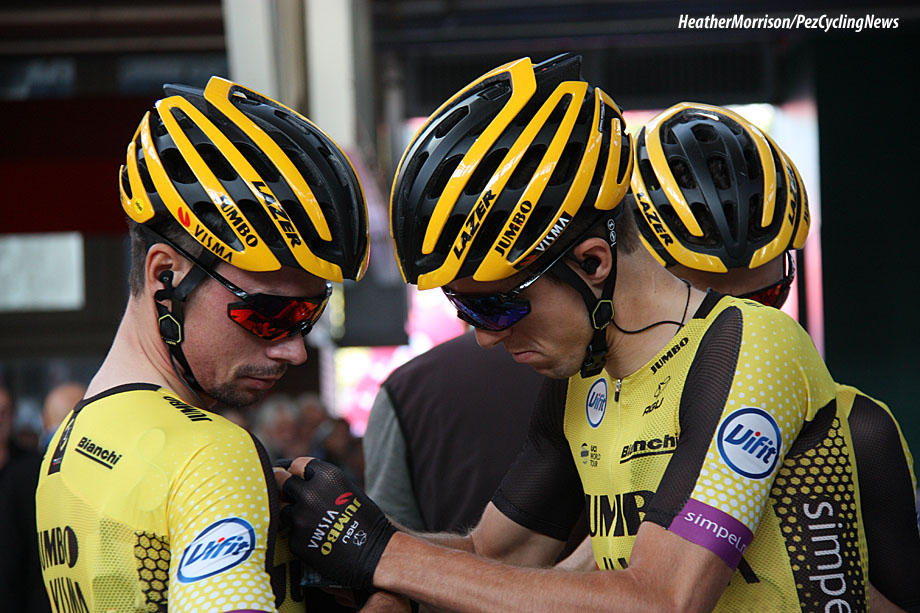 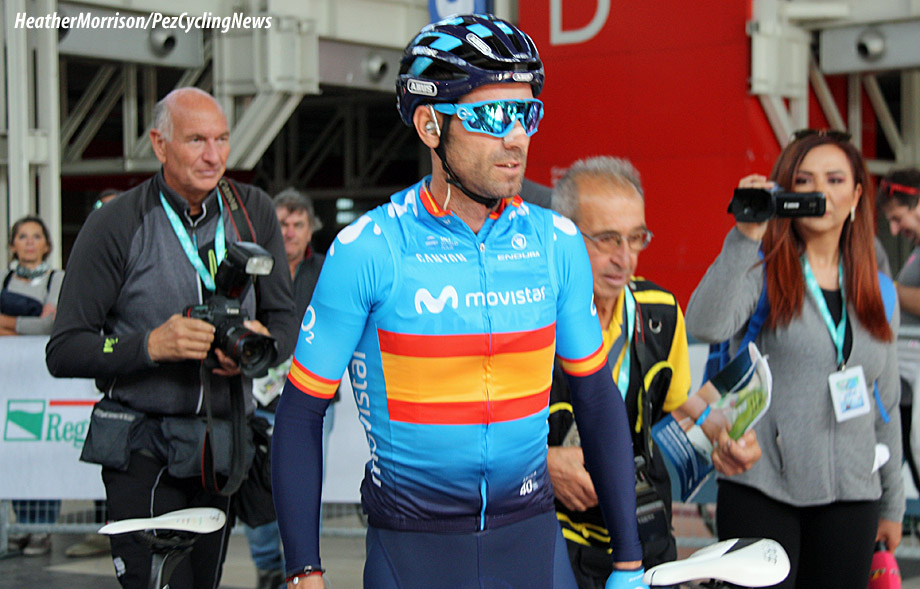 Are Bala's Spanish stripes bigger than usual for Movistar 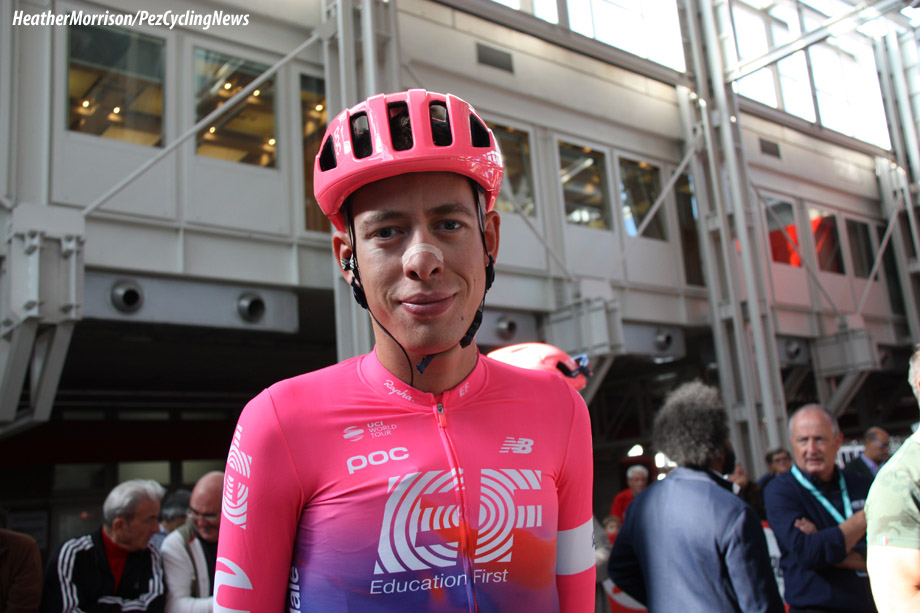 A rare smile (yes, that's a smile) from the Lancashire Hotshot - Hugh Carthy

After my failed attempt to find the women's race, I head over to San Luca, it's not easy. I think I have made it and park in one of the many dreaded underground garages in Bologna Centro. The garage man says he will park it (phew), but when I ask him where is San Luca, he says I am still several kilometres away. 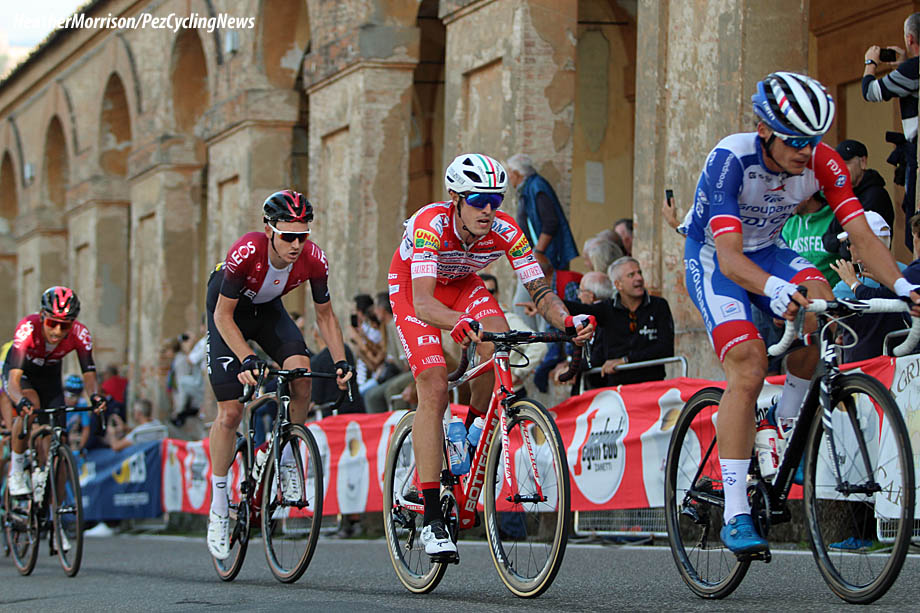 Geoghegan Hart and Bernal, 1st time up to San Luca - they don't look too clever 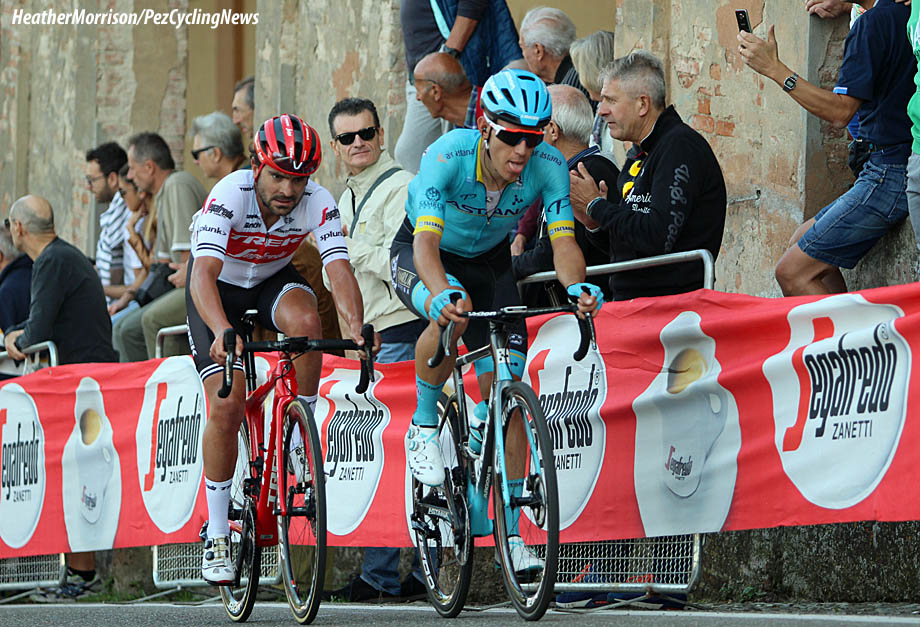 Mosca and Ballerini hit the climb for the first time

We check Google maps and select the correct place, I have to reverse out of the garage... I go straight into a wall, don’t look just drive on. I find San Luca eventually and actually drive on from the climb first time, thinking I can't possible go up there, but I see a small train go up so I go round the block and head up the climb. 1st gear all the way, stalled on that switchback corner, man it's steep. I nearly go into the barriers at one point because the little train was coming back. Nervous the whole time now. 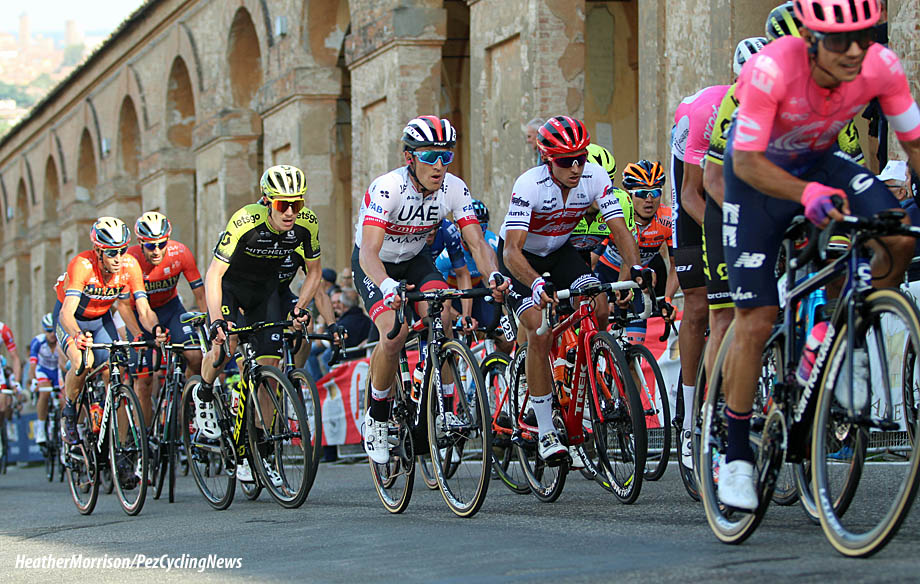 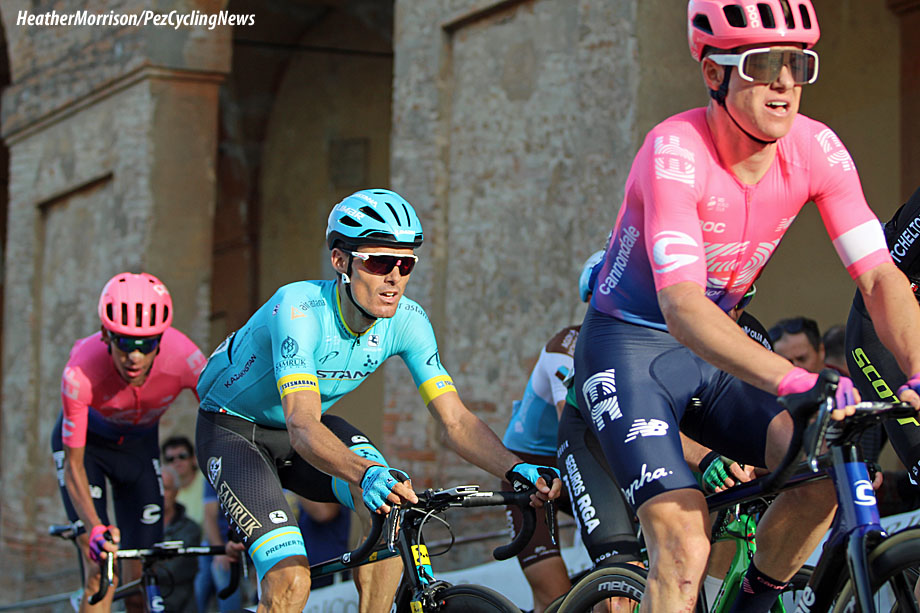 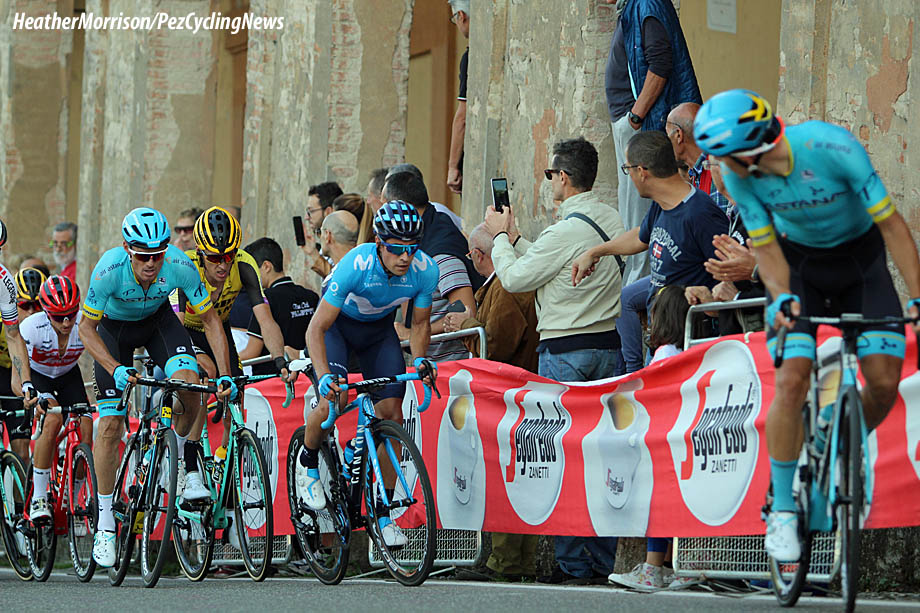 After being in the break, Ballerini waits up for Fuglsang, Landa is also there

I reach the summit, and there is nowhere to park, even for the press. A policeman advises me to park in town. There is nowhere to turn around either, so I have to go straight over the top and hope that it takes me somewhere. Google Maps couldn’t cope, because obviously it just wanted me to go back, so I had to use my sense of direction. Oh Dear. 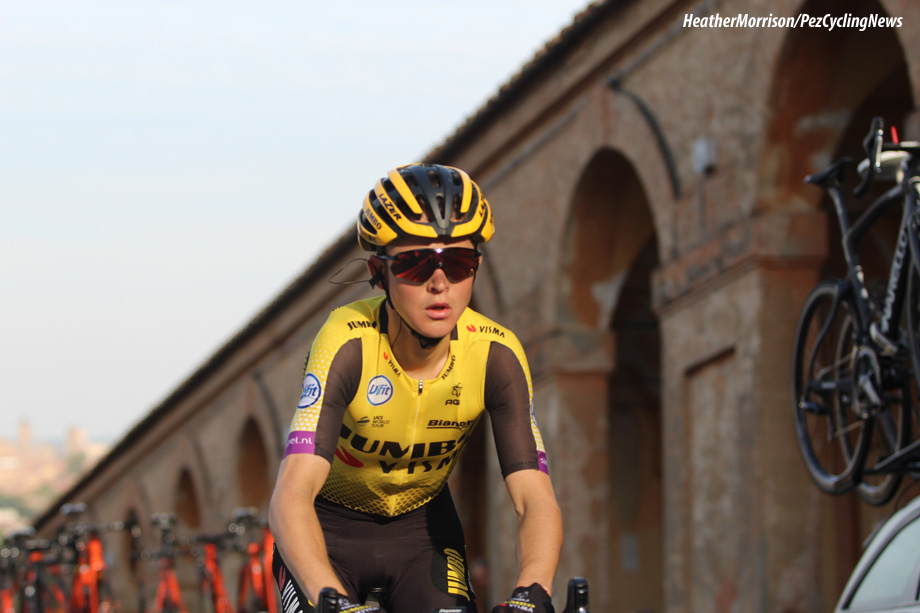 Antwan Tolhoek - Does his mum know he's not at school? 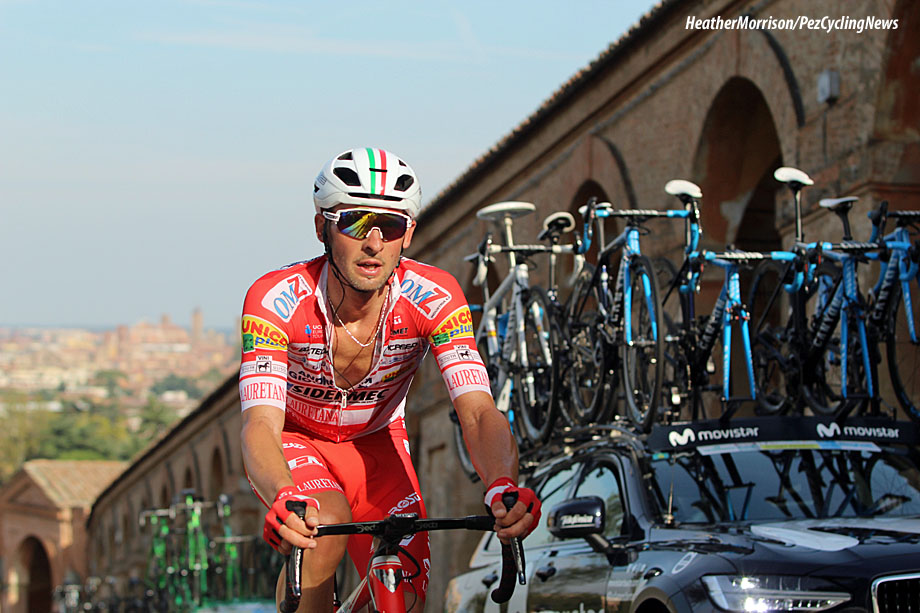 An Androni rider amongst the cars

After abut 30 minutes, I get back to the bottom of the hill where there is some parking. I am fairly certain that I will not be getting up that hill under my own steam, so I head to a walkway at the beginning of the alcoves and think I should get some good shots from there, the women's race went through and the photos were not good, so I had to get up the hill. Time to find a toilet, a sandwich and a cup of tea.... and start walking. Taking it in stages, because I am old and fat, I make it to the third corner and the race is on the way. This is a good spot and I know I will die before the summit. 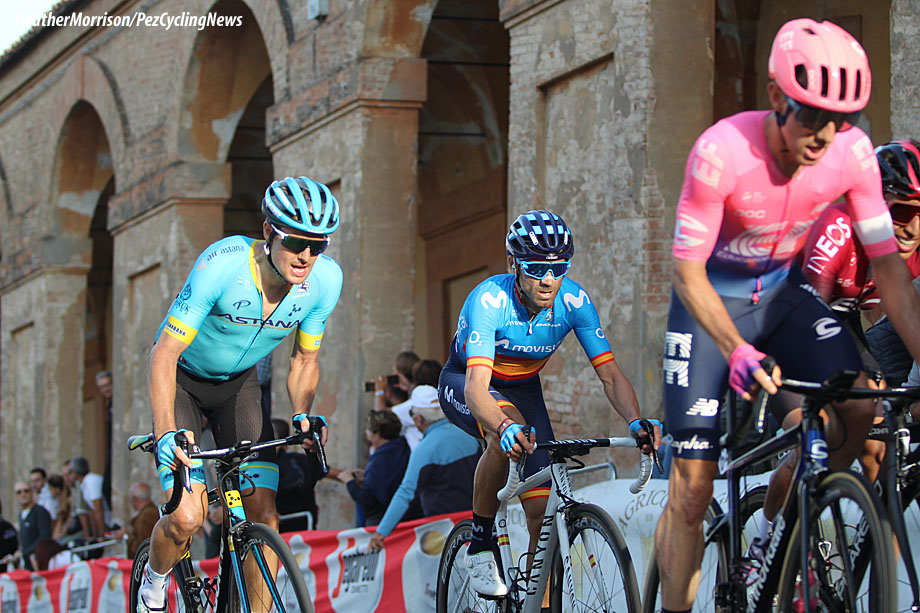 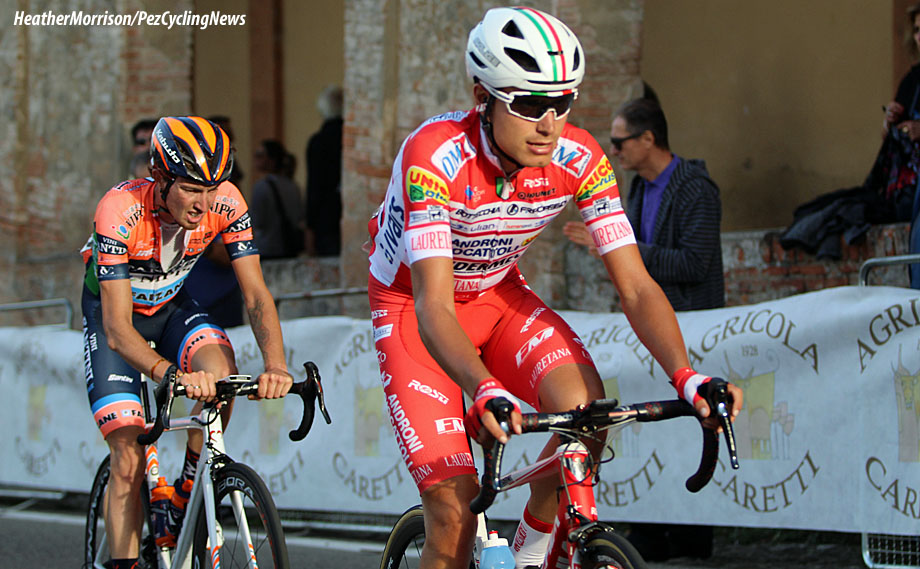 At one point I contact Valerio, the PR guy for Neri Sottoli, and ask him if I could get a lift if they were taking the car. He did get back to me but he was already up the hill, he walked! He told me to just ask at the buses, someone would take me. Then I tweeted a friend at Trek to see if they would pick me up – no joy. My spot was good so I was happy enough. 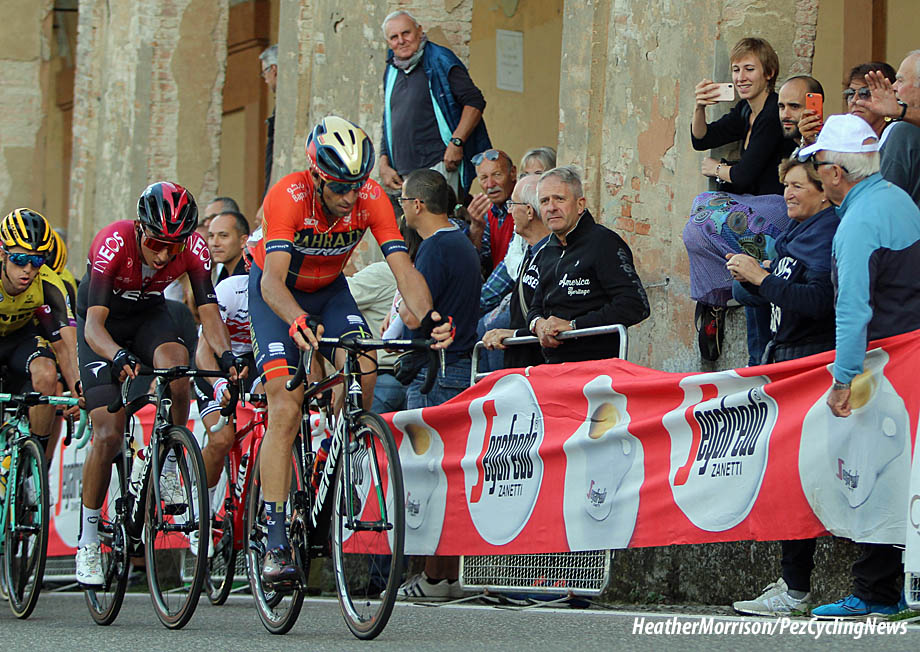 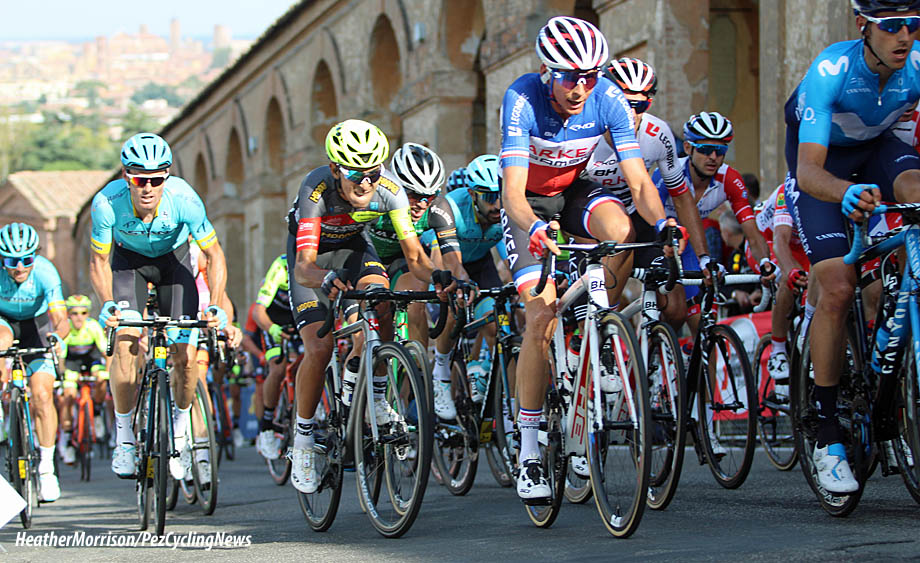 Barguil, Sanchez, Mollard and the peloton on the 3rd lap

Sitting on a hill circuit like this is cool, you see them gradually wilt and blow up. Mosca put up a brave, brave fight and came so close, but once he blew, he blew and finally came in last. But he came home, many didn’t (only 65 finishers). When Ballerini blew after the first ascent, on the second climb he was visibly going backwards. By the third pass he was back working for Fuglsang. That’s another great thing about a climb on a circuit, they go slower and slower with each ascent. I saw the mighty Ineos suffer worse than an Italian Conti team, and Roglic was so well hidden I only notice him in my photos on the final ascent. 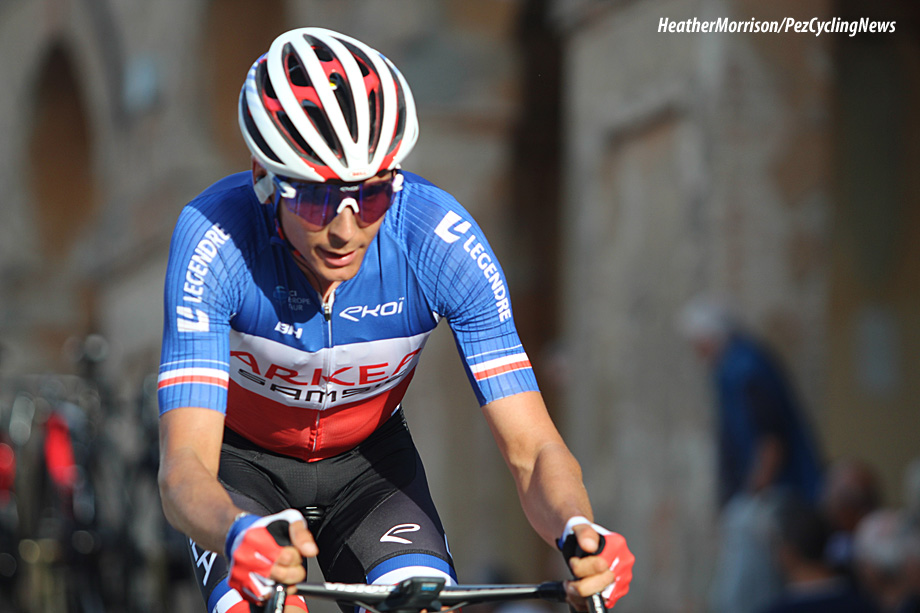 As I had missed the podium I head to the team bus area in the hope of getting Roglic back at the Jumbo-Visma bus. After about an hour and a half, a Jumbo team car arrives and everyone runs towards it, there are always fans around the buses waiting for hours for the winners. Behind the Jumbo-Visma car comes a large black beast, and Roglic's wife is driving and he is in the passenger seat with the baby. He is laughing and pointing at the scrum around the team car. It doesn’t last long as they quickly notice and flood the car. Just like the photos of Pinot in the car crying in the TdF, I felt that it was too intrusive, even though I'd hung around for almost two hours. I didn’t take any pics. 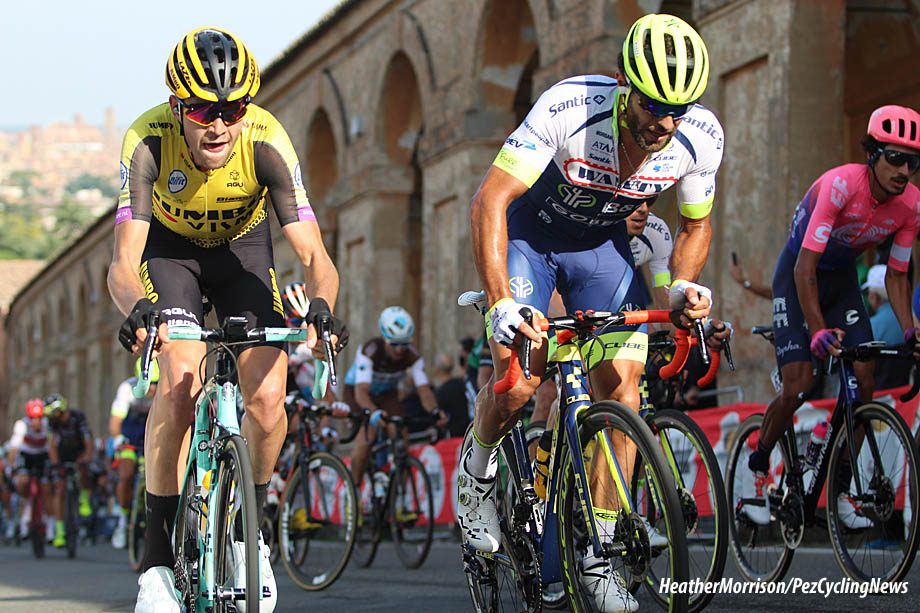 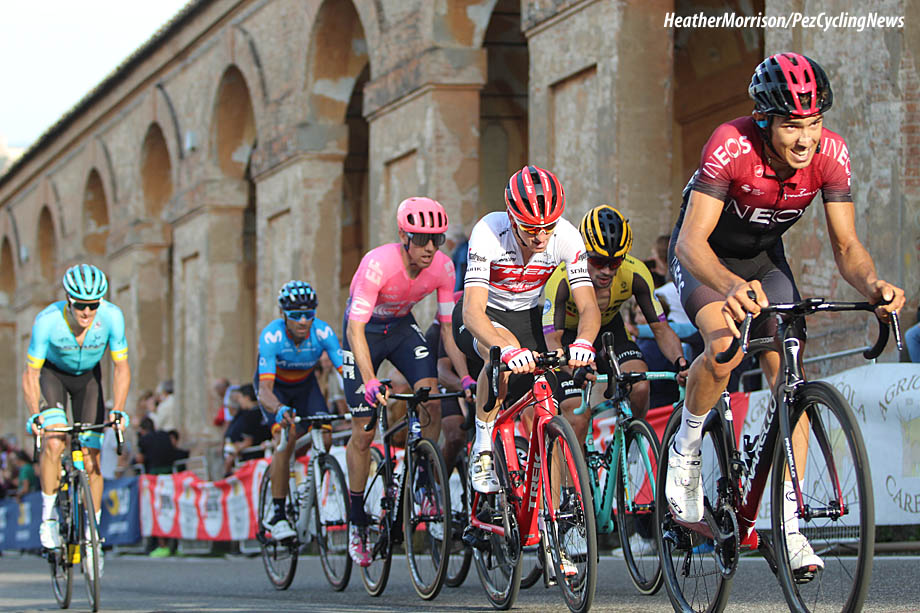 When it was over, of course you don’t know at first who has won. But when I see 'Bala' riding back down the hill soon after – I know it wasn’t him. 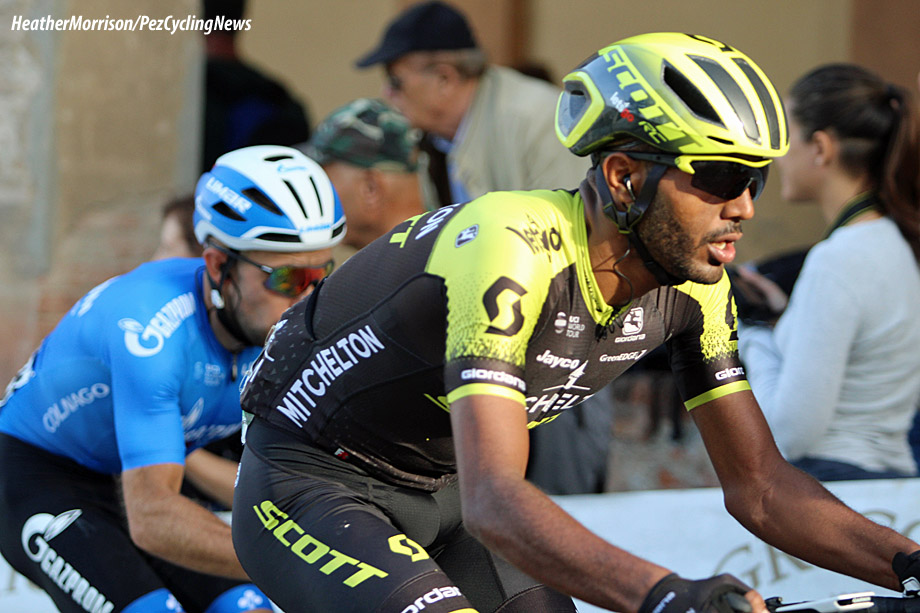 Grmay on the final lap 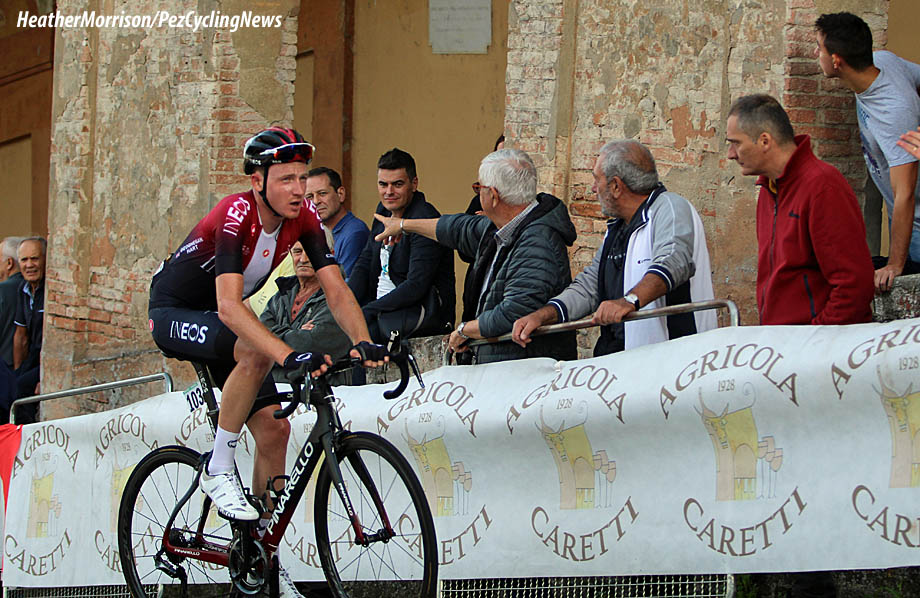 Time to head back out to Sissa Trescali, my village. It was a hellish drive back, I kept falling asleep, I was so tired and there are no services here like at home - that I could find. So I just kept going. 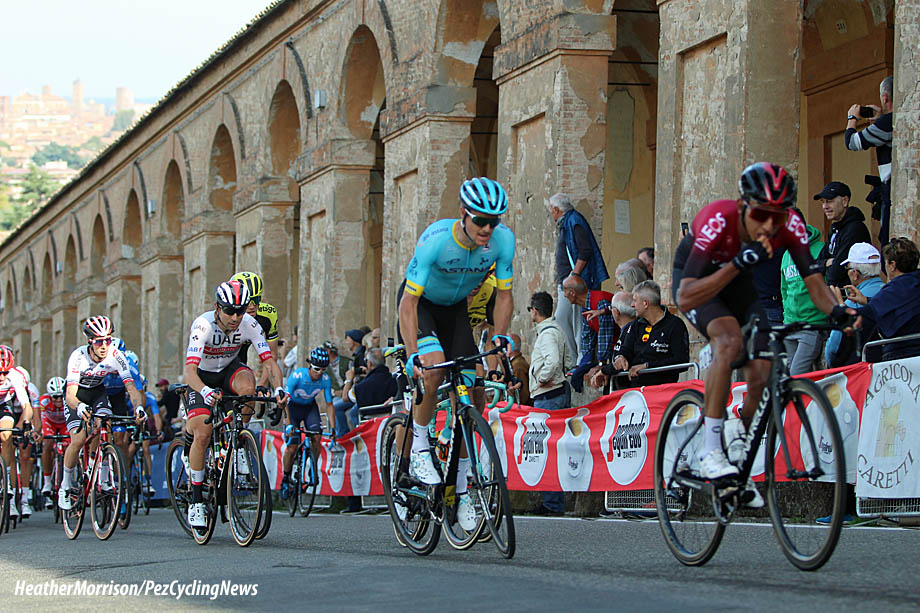 Next up GP Bruno Beghelli! 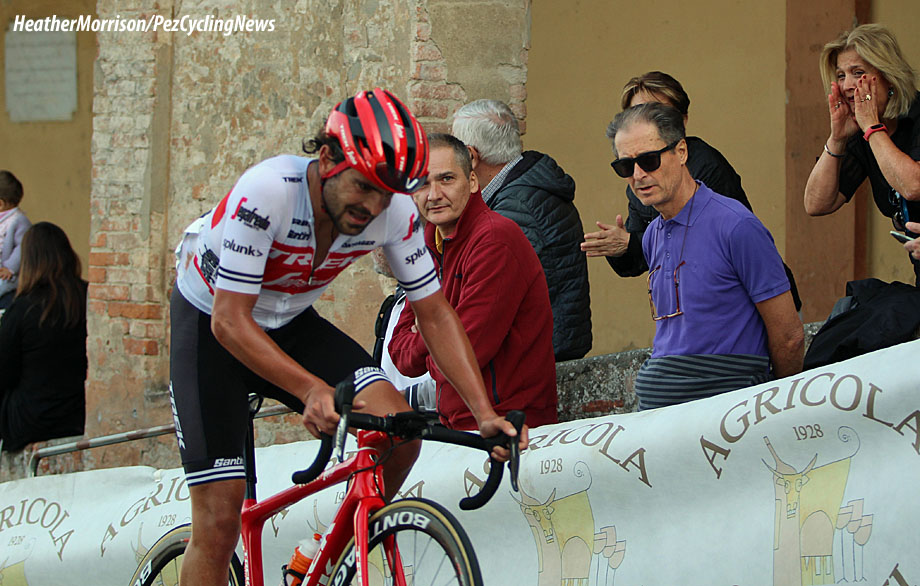