PeloPics: PEZ photog, Darrell Parks is on the roadside in California for the 2019 AMGEN Tour of California. After a busy day on stage 1 in Sacramento, Darrell has sent us his favorite 'Photos of the Day' as Peter Sagan (Bora-Hansgrohe) took the win from Travis McCabe (USA National Team) and Maximilian Walscheid (Sunweb).


More from California in EUROTRASH Monday. More top pics from Darrell to come this week, have a look at Darrell's website HERE. 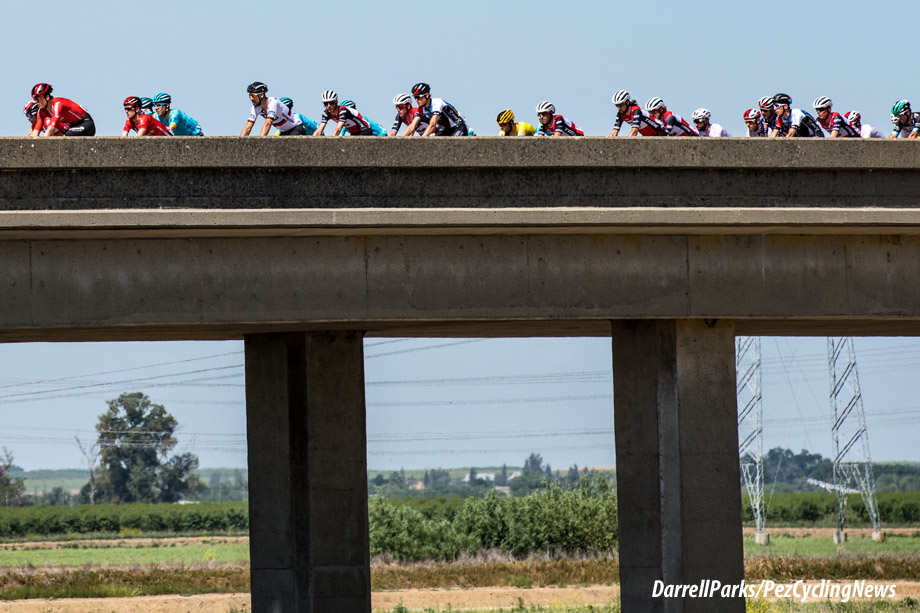 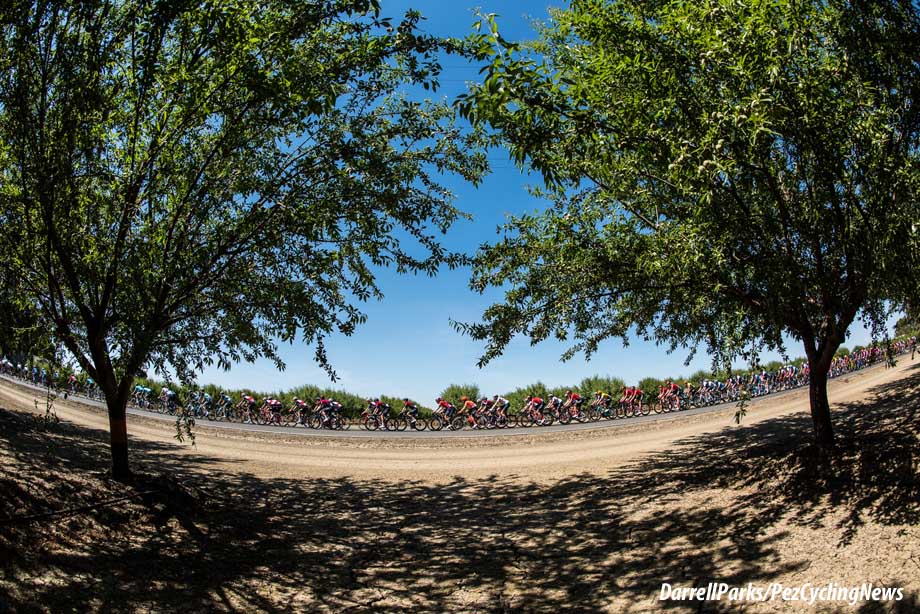 The final meters of the race’s 10th visit to Sacramento were neck and neck with Sagan and McCabe, who is celebrating his 30th birthday today. Sagan placed second twice before on this finish behind Mark Cavendish in 2015 and 2016. 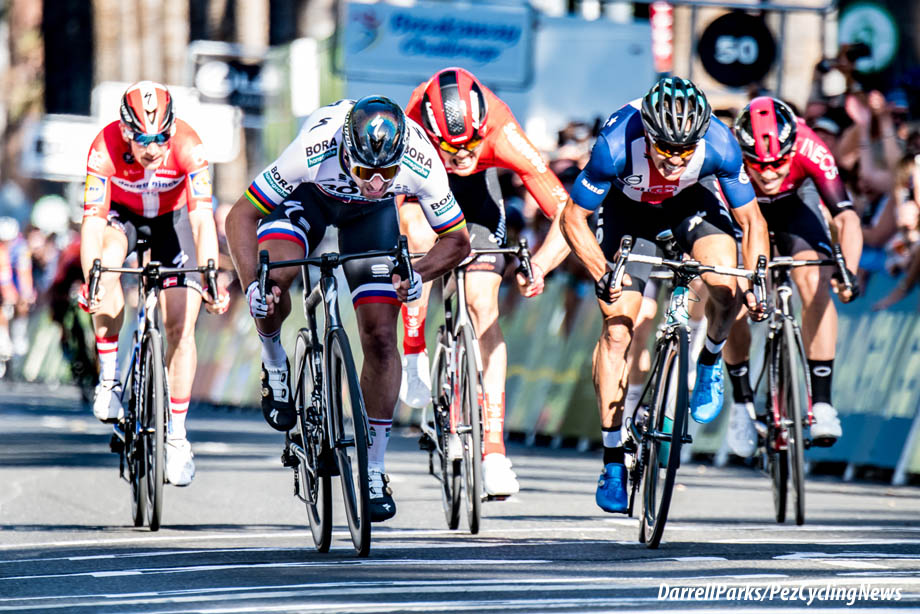 Welcome back Peter Sagan - Good to see him win again

Third for the stage was Maximilian Walscheid (GER) of Team Sunweb, which set a blazing tempo around the Capitol Circuits to get him in prime position for the final sprint.

“We will see here day by day how it’s going…,” said Sagan. “I had stopped [winning] for one year, last year I didn’t win, but I am very happy that I could catch another one. If I can continue like this, it’s gonna be nice to hold some record here in the [Amgen] Tour of California.”

Stage 1 presented by Amgen was an 88.9-mile ride beginning and ending in the shadow of the State Capitol Building, with a three-circuit finish.

“I felt great, I thought I was closing in on him [Sagan]; I had to come from four or five wheels back … I can’t be more happy with second place; losing to a World Champion is not a bad thing,” said McCabe.

An early breakaway of four dwindled to two following the intermediate Sprint in Winters, including 21-year-old Tyler Stites (Tucson, Ariz.), who is making his Amgen Tour of California debut with the USA Cycling National Team after finishing third on the final stage and fifth overall at the recent Tour of the Gila. Stites will wear the TAG Heuer Best Young Rider Jersey tomorrow. The last rider standing before being reabsorbed by the peloton as it returned to the city center was Charles Planet (FRA) of Team Novo Nordisk, a team of athletes with diabetes, earning him the day’s Breakaway from Cancer® Most Courageous Rider Jersey.

The peloton of 19 teams (132 riders) representing 33 countries includes three World Champions, Olympians, Tour de France stage winners and six current National Road Race Champions from around the world. Throughout the week, cyclists will contest 773 miles of California’s most scenic highways, mountain roads and coastlines, visiting 13 cities throughout the state for stage starts and finishes, concluding in Pasadena on May 18.

Tomorrow’s Stage 2 presented by Visit California begins in the first-time race Host City of Rancho Cordova, with the cyclists then journeying 133.3 miles and climbing 14,500 feet to the finish at the slopes of South Lake Tahoe’s Heavenly Ski Resort.

Fans can stay up to date on the race via daily live airings on NBC Sports Network with the May 18 conclusion live on NBC, and via the free Amgen Tour of California App.

The Amgen Tour of California Women's Race empowered with SRAM UCI WorldTour race showcasing the world’s best women cyclists will run concurrently for the final three days of the men’s event, beginning in Ventura May 16-18.

Amgen Tour of California fans can connect with the race through all of their favorite social media platforms and use #AmgenTOC to join the conversation.

Amgen, title sponsor of the Amgen Tour of California for the 14th consecutive year, is a biotechnology company in the race to dramatically improve patients’ lives and the company leverages its sponsorship to raise awareness and connect with patients through its Breakaway initiatives.

On May 1, Amgen launched the Breakaway Challenge, a national social fitness movement to motivate individuals to take action in their health and to support the fight against heart disease and cancer. Amgen’s Breakaway Challenge joins together Breakaway from Cancer® and Breakaway from Heart Disease™ and urges participants to turn their walking, running or cycling miles into support for eight nonprofit advocacy organizations that are dedicated to cancer and heart disease research.

“Building and connecting with communities is at the core of Amgen’s Breakaway initiatives and we are incredibly pleased with the community forming as part of the Breakaway Challenge,” said Corrine Le Goff, Senior Vice President, General Manager, General Medicine, Amgen. “Amgen is more committed than ever to scientific innovation and to building a community of support for patients. It takes a team to win the Amgen Tour of California, it takes a team to make great strides in scientific innovation and it takes a community to educate, support and empower patients. Join our Breakaway Challenge community today.”

Created by Amgen in 2005, Breakaway from Cancer® is a national initiative to raise awareness of the important resources available to people impacted by cancer – from prevention to survivorship. And, the Breakaway from Heart Disease™ initiative encourages Americans to take charge of their risk of heart disease through diagnostic screenings as well as information and tools related to physical activity and healthy eating. Learn more at www.breakawayfromcancer.com and www.breakawayfromheartdisease.com.

Throughout the race, Amgen will honor and celebrate patients. Each day the race will be started by a cancer or heart disease survivor, and the Most Courageous jersey will be awarded by a survivor as well. Cyclists will also wear Breakaway “I Ride For” bibs recognizing someone in their life impacted by cancer or heart disease.

“Creating powerful connections in the communities we serve is just as important as developing vital medicines and making a difference in the world,” continued Le Goff. “Today’s healthcare options for treating serious illness are more promising than at any other time in our history. Now more than ever, patients living with serious diseases such as cancer and cardiovascular disease can look to the future with greater hope. Our sponsorship of the Amgen Tour of California gives us a platform to discuss, educate and empower patients to have hope and believe in innovation to live a longer, healthier life.”