'Skol 6' Photo Gallery: We all know of Ed Hood's love of the '6 Day,' and everything else cycling, so you can imagine his excitement when he happened across a collection of photos from the 1980 London Skol 6 by Bill Kund. Bill has kindly given us permission to reproduce some of his brilliant track shots along with how it all came about. 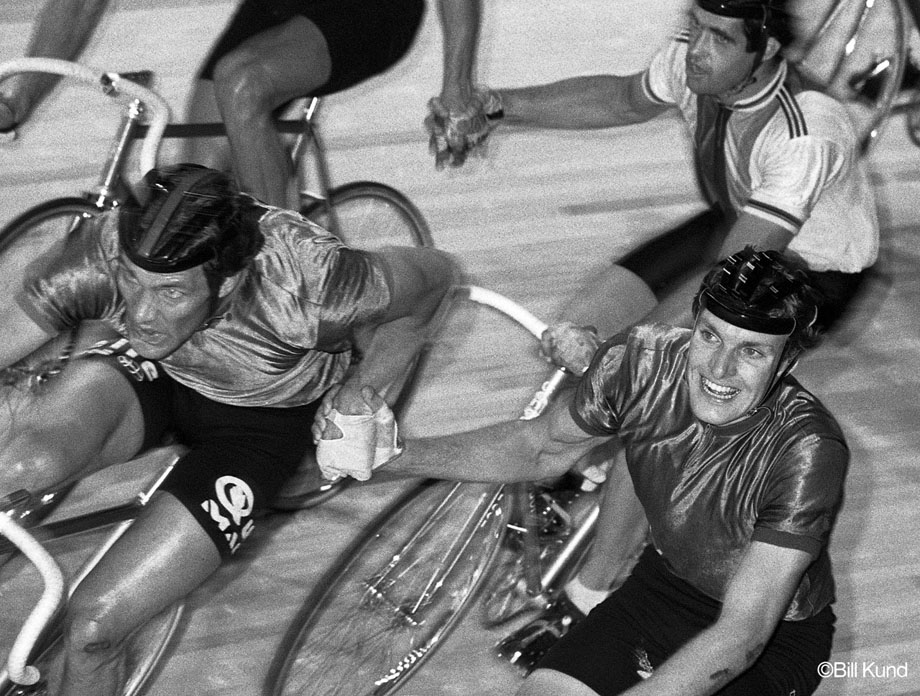 Recently we came upon some fantastic images from the London, Skol Lager sponsored six day race from 1980, won by legendary Aussie six day pairing Danny Clark and Don Allan. This was the last of the London sixes until the race was revived in 2015 when Belgium’s Kenny De Ketele and Moreno De Pauw took the honours. The man who took the pictures, American ex-Olympic kilometre rider, Bill Kund is going to write a book about the race and those who took part in it.

We thought it would be interesting to chat to the man and Bill gave freely of his time and pin sharp images.

PEZ: You were a racing cyclist, Bill?
Bill Kund: Yes, but since I never had any financial support from home I worked throughout my racing career. I raced while working my way through university, which accounted for my focusing on track racing during that time. I made the US team for the Tokyo Olympics, riding the kilometre, I finished 14th with a 1:12 to Patrick Sercu’s winning 1:09. Then I got a teaching position in Southern California fresh out of university but after two years of teaching there I moved to The Netherlands to race there. While I was there I taught at the American School of Rotterdam and took out a pro license to race mainly in The Netherlands and Belgium. To supplement this, I also began playing music in pubs and clubs, (with some occasional radio and TV gigs) in The Netherlands. In hindsight, there was no way this was going to work but I needed to, at least, give it a try. 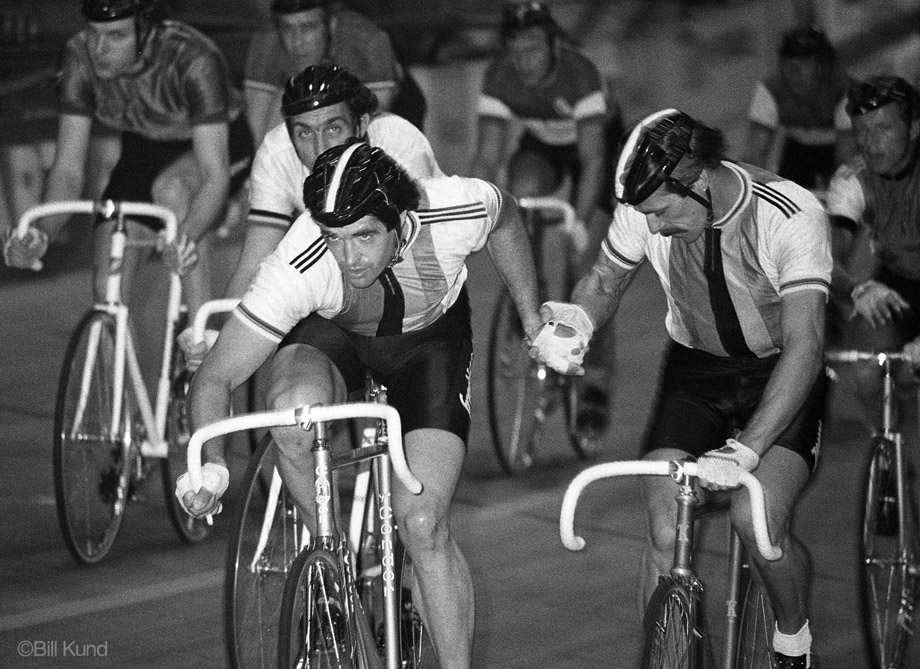 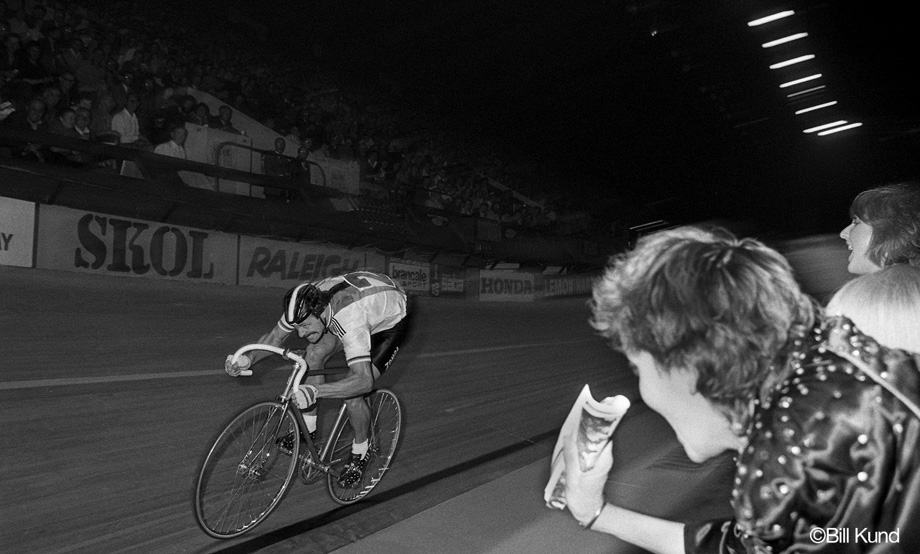 PEZ: And photography?
After four years in The Netherlands I stopped racing, moved to England, and continued teaching and playing music there. We lived in Kingston on Thames and I taught at The American Community School in Cobham, Surrey. My father was a very accomplished semi-pro photographer. He used these skills to help support us in post war Austria until we emigrated to the United States in 1955. He got me started with photography, including darkroom work, by the time I was nine years old. I drifted in and out of photography and began playing with it again while I lived in Europe. I began to get more serious while I lived in England. I kept getting positive comments from the manager of a photo shop in New Malden where I was getting processing done and asked him one day if he thought I was good enough to try to make a career of this. He encouraged me to go for it.

I began with a series of photos of telephone boxes in, and around, the area where I lived. I called the collection, “The Great British Telephone Booth” and got some good responses from that work. Some 10 years later those images were actually responsible for my getting a job with a major commercial photography studio in North Carolina back in the USA. This job ended up being like photography school on steroids’ large format studio photography. This launched my photography career into high gear in the 1980’s. 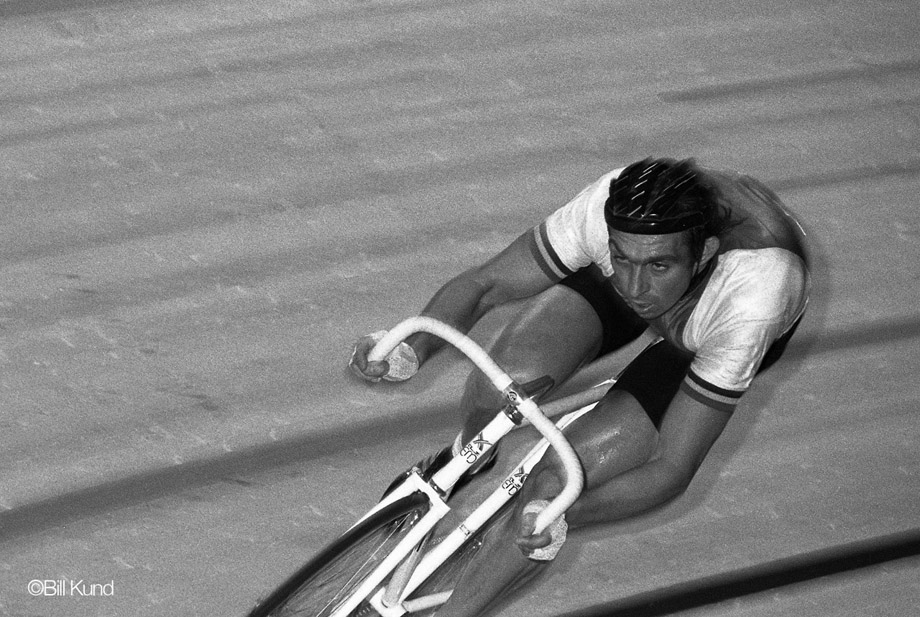 PEZ: And the Skol race?
In 1980 I decided to move back to the U.S. I had already sent my wife and two kids to North Carolina and stayed on to sell my house in Kingston. While I was there I saw that the Skol six day race was beginning soon and thought it would be a good opportunity to test my skills with the camera. I had recently purchased a new Nikon F3 with a good array of lenses, so I was well armed. Because of my racing experience, I felt I could capture what the racing was all about from an insider’s perspective. I had seen one night of the Rotterdam Six in the Ahoy Stadium but never had time to watch much cycle racing except from inside the peloton. 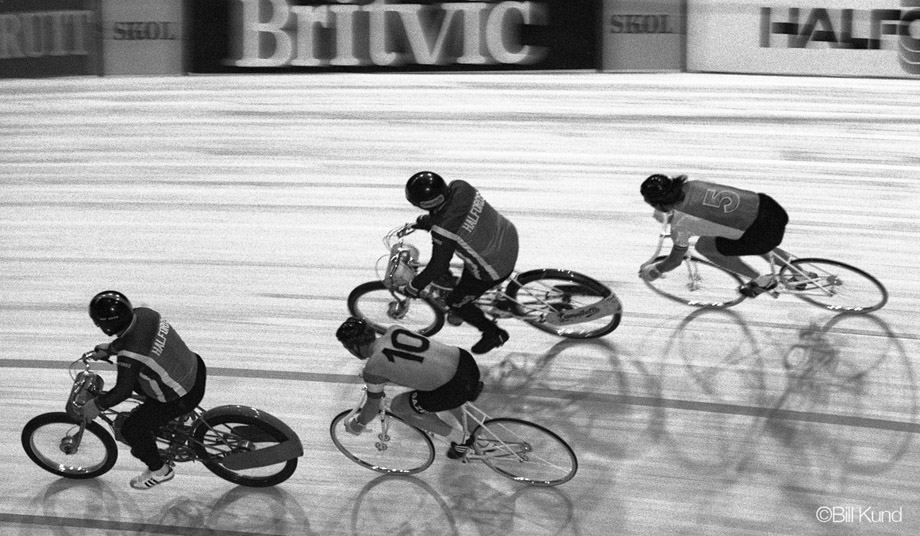 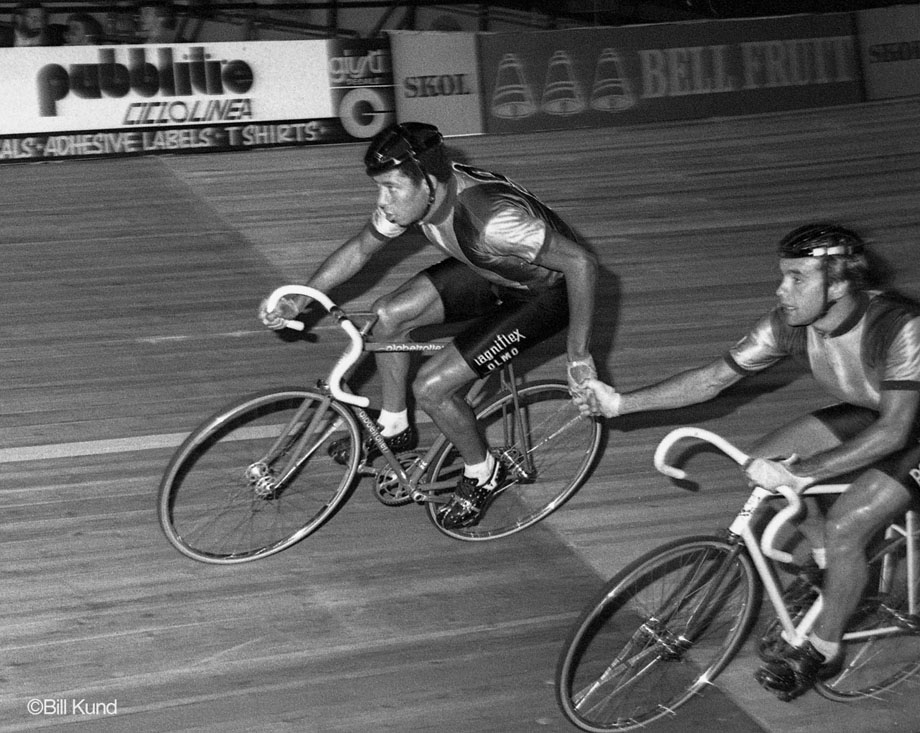 PEZ: How did you get credentials for the race?
I showed up the first night of the Skol Six and did some fast talking and name dropping to get permission to shoot. I shot all six nights. I found someone who would process the film and make contact prints the following morning and studied these to see what needed improving and what I needed to focus on the next evening. I had raced with both Danny Clark and Don Allan in Holland-along with Rene Pijnen and Willy Debosscher. Sercu won my event at the Tokyo Games and I used to see him in the peloton in Belgium on occasion, so I was not just some stranger wandering around. Leen Jansen, the soigneur, had been hired by the US Team for the World’s at Leicester in 1970 so I had spent several days on his massage table while I was there.

It was great to reconnect with him and we did a lengthy interview during the Six, which resulted in my writing a 5,000 word article published in Velo News Shortly after the race. I plan to include this article in the book. I also got a Velo News cover with one of the images and wrote an article about six day racing which was published by Velo News several months later. This whole project ended up being a big confidence builder for me. One of the images won first place in a photo contest by the English publication “Amateur Photographer” and another image was awarded second prize in the Nikon International Photo Contest. 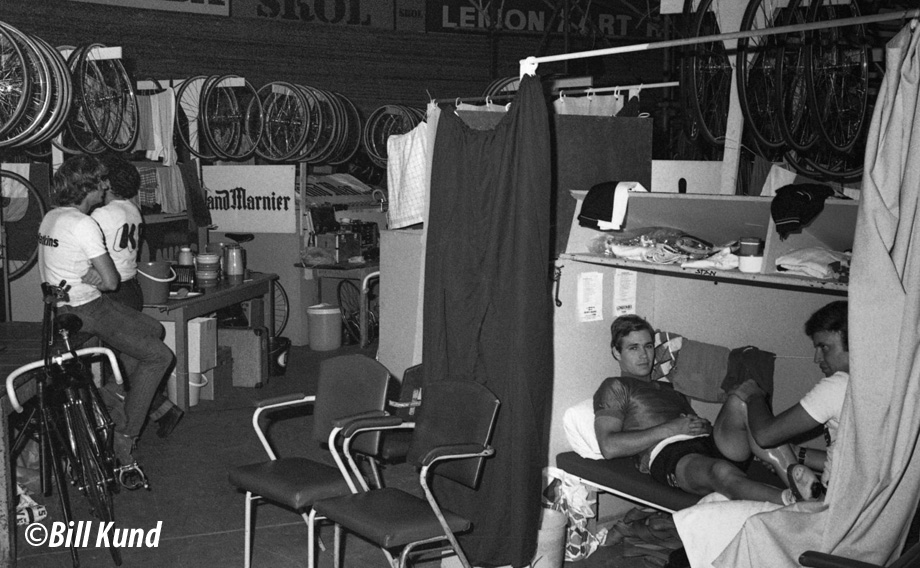 Hermann gets his massage 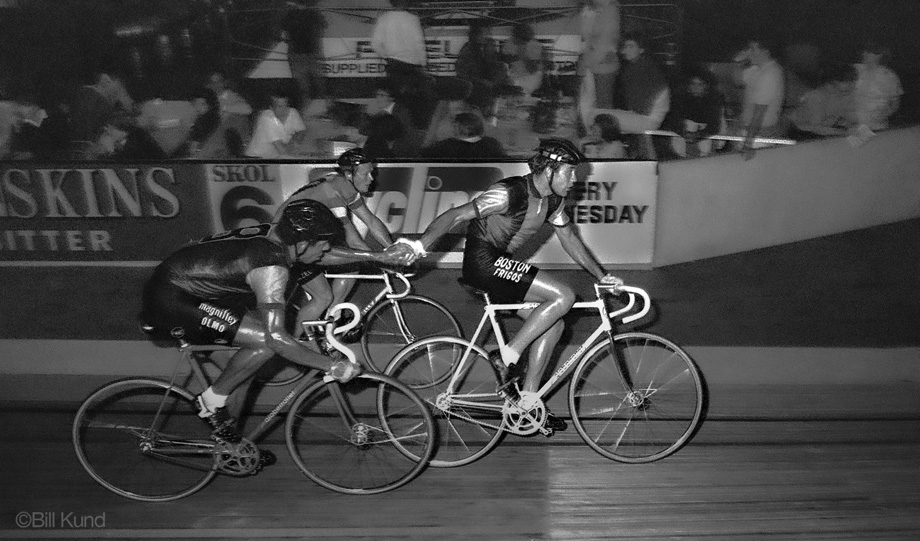 PEZ: How did the other photogs take to an ‘outsider?’
There wasn’t much interaction with other photographers during the race - mostly you just try to stay out of each other’s way. Ironically, I recently contacted Graham Watson and learned that this particular race was his first assignment for an English cycling publication. I found that many of my good images featured Danny Clark, Don Allan and Udo Hempel. This was in the days before auto focus. Typically I would pre focus on an area and shoot, either panning or stationary, whatever came into view. The riders that were photographed most just appeared there largely by chance. As I mentioned earlier, this whole shoot was a big learning experience for me - shoot, process the film, study contact sheets and learn from my successes and mistakes. You can learn a lot in six day’s worth of photography. 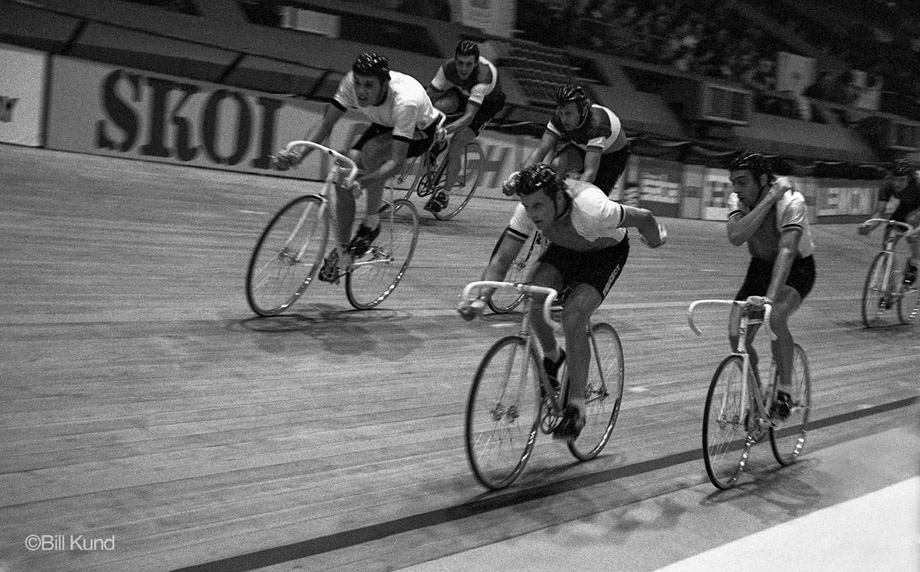 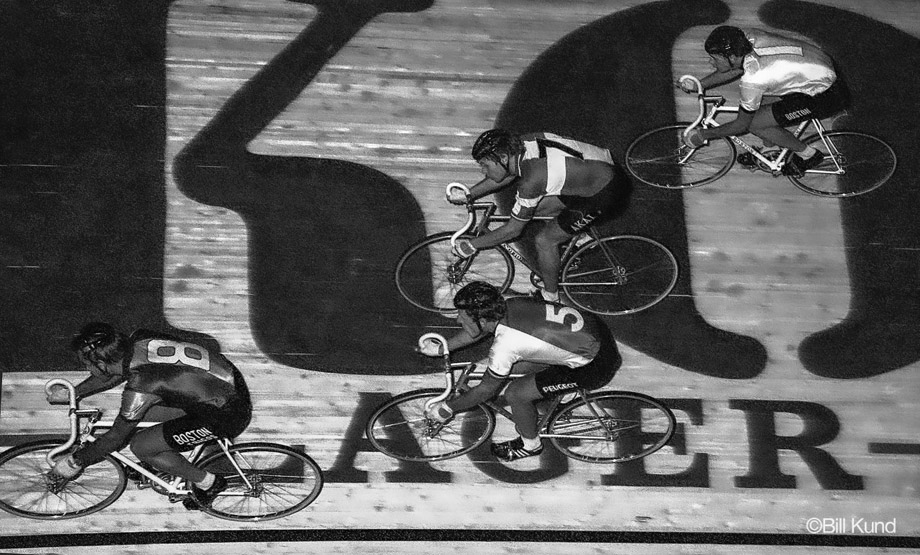 PEZ: Tell us about the book.
This project was photographed to present a complete story of six day racing featuring not just the riders, but the support crews, the fans, the riders’ living conditions the track and the whole ambiance of the race. I felt that the black and white images enhanced the feel of the grittiness of racing back then. Current six day racing has a more colorful feel than the racing did back in 1980. That period was almost like a bridge from original six day racing to what is being offered now. I’m planning to produce a hard-cover book focused largely on high quality black and white images, in essence a photo book first, with a section about the riders, hopefully with quotes from the surviving riders and some background anecdotes about Peter Post and some of the other riders and crew. I will include the article about Leen Jansen, which ran in Velo News. 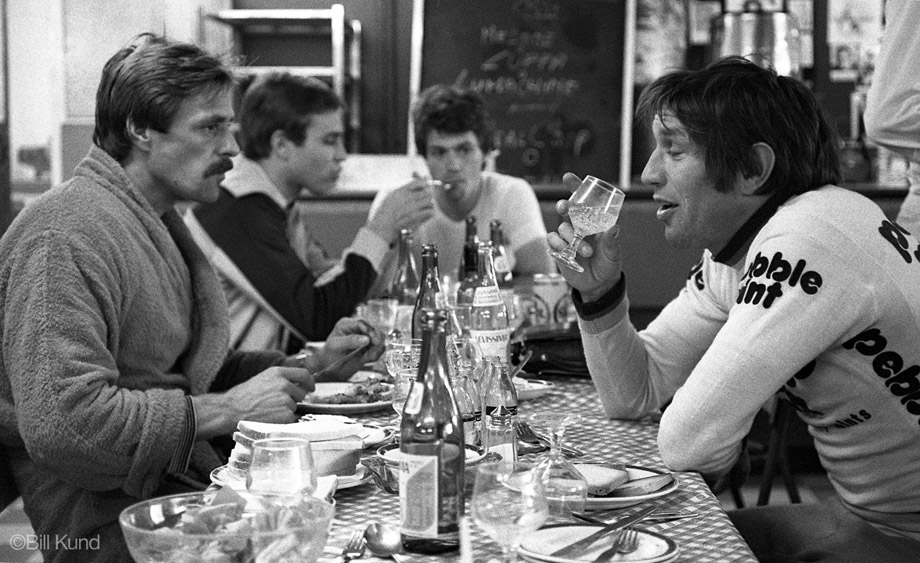 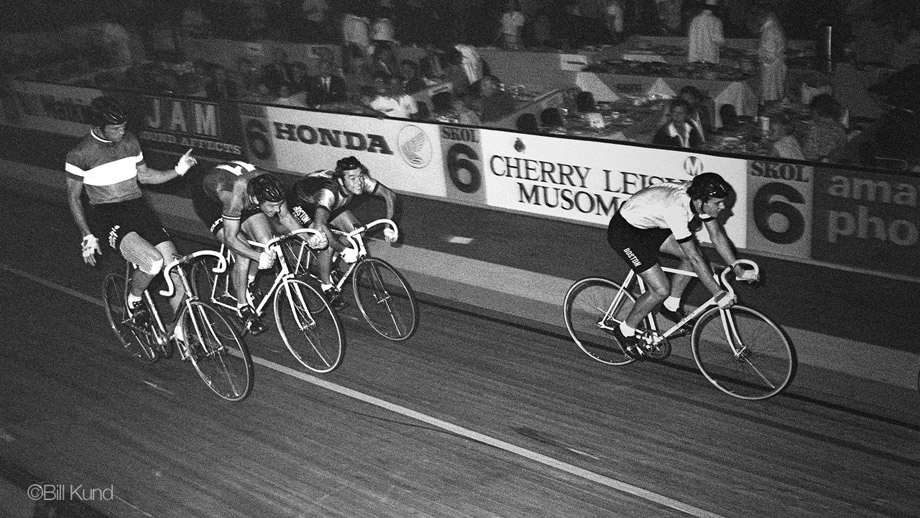 The fun of 'The Devil'

I have about 140 or so images to work with. In addition to the book, I will also be featuring my favorite images for sale on a Shopify site I’m working on now. It can be accessed via www.kundphotos.com.

Featured images can also be seen on my Facebook page (location photography by Bill Kund) and on Instagram posts. 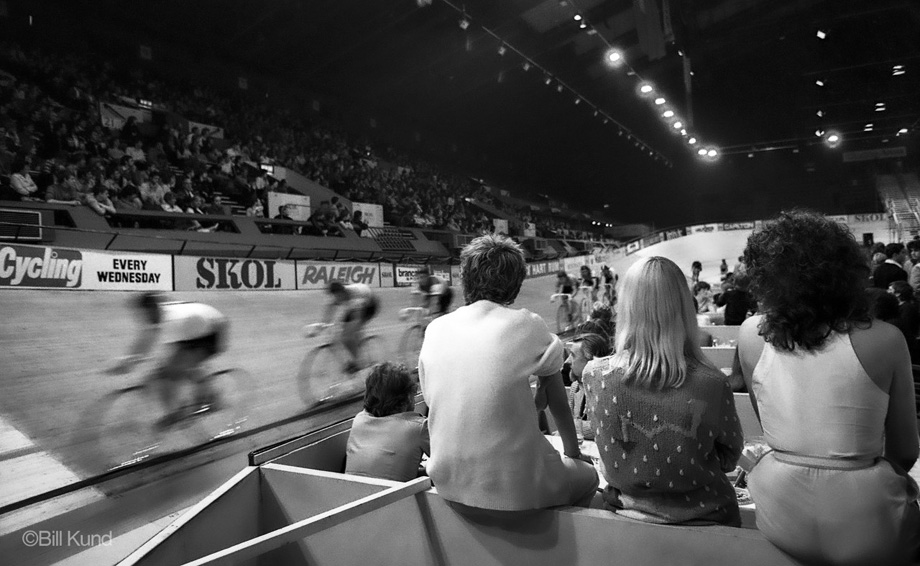 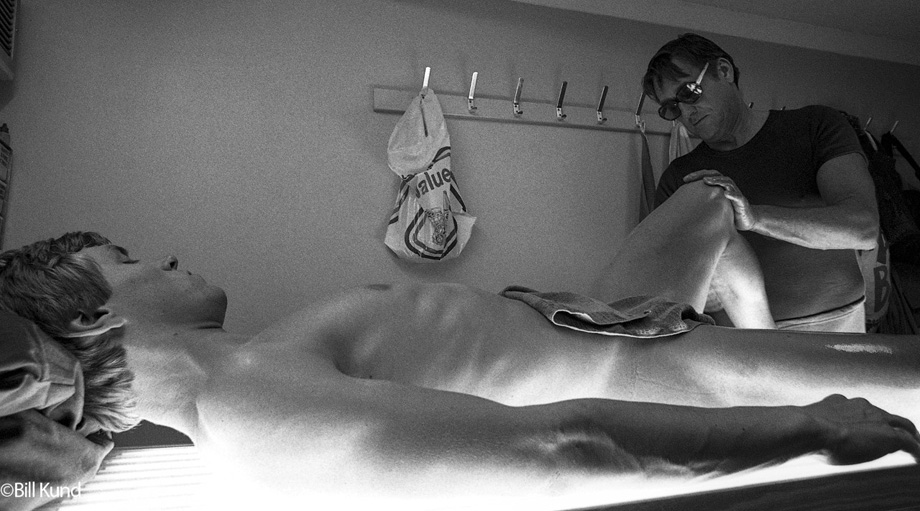 The whole collection is also on my website: www.billkund.com. I have partnered with a great photolab in Boulder Colorado, which employs a couple of racing cyclists, who will be doing the photo printing for me. The images will be high quality giclee images on archival paper. In addition, if folks want to contact me directly, I’m happy to answer any questions or customize photo orders.

Latterly with the skills I learned for high end commercial photography at Alderman, and my new found skills in sales, I built a business creating high end commercial location photography for architects construction companies, the hospitality industry and the nautical world. I’m also really enjoying revisiting my archives and sharing images I think other folks will enjoy. 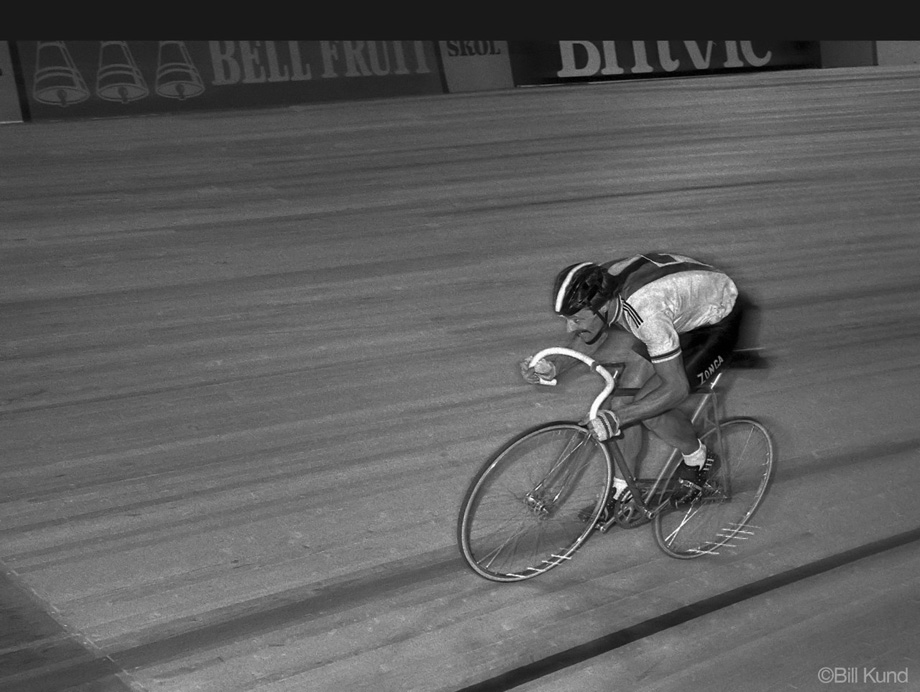 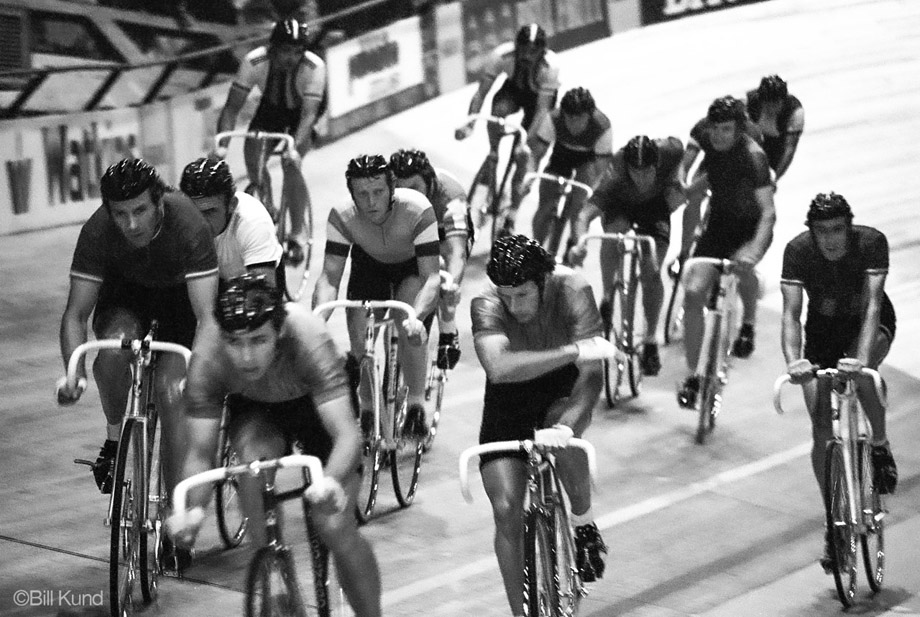 # Dave and I were at that 1980 Skol Six Day race and Bill’s pictures brought back dome great memories, we look forward to seeing his book. # 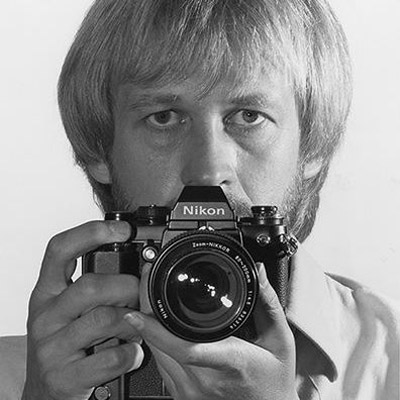