The Tour de France winner stopped over in Maser to deliver the yellow jersey and yellow shoes to Dino Signori.

It was a special day at Sidi general headquarters in Maser (Treviso) with Chris Froome (Team Sky) paying us a visit. It was the perfect occasion to reminisce on the thrills of an extraordinary victory at the 2016 Tour de France, in a face to face chat with Dino Signori. These two men are from different ages and different worlds, but they are bound by their common strong ties to the bicycle. 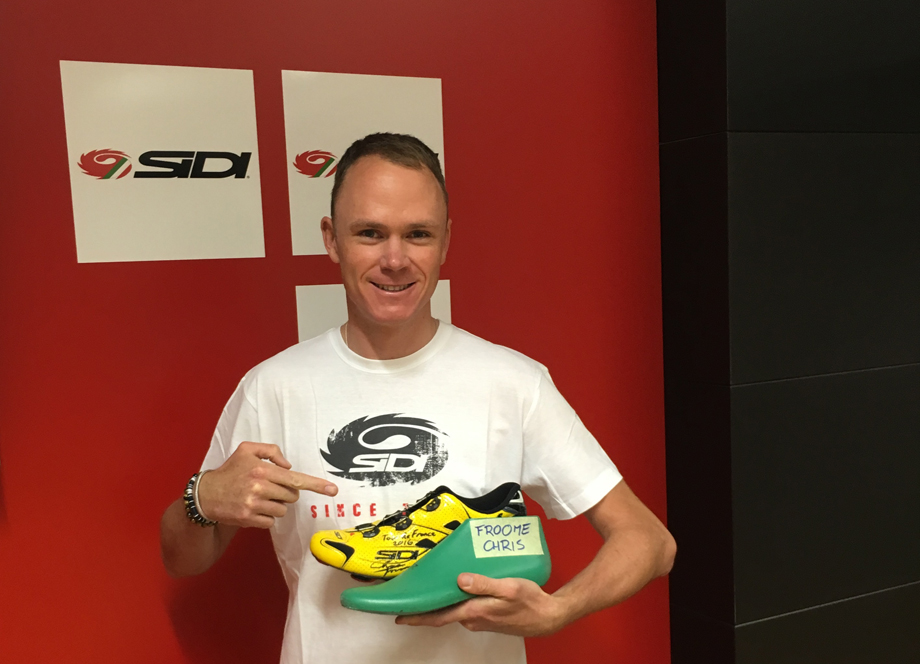 “Froome’s victory at the Tour de France was a tremendous satisfaction for us. One can make plenty of comparisons, but the Tour is and always has been the most important bicycle race in the world. All three of the yellow jerseys won by Froome (2013, 2015 and 2016) bear the Sidi signature. However, I think the 2016 race was the finest victory for the way Froome raced and how much he wanted it. He thrilled his fans and overall enthusiasts as only great champions can,” says Dino Signori, founder of Sidi who still manages the company with the same enthusiasm as when he started. 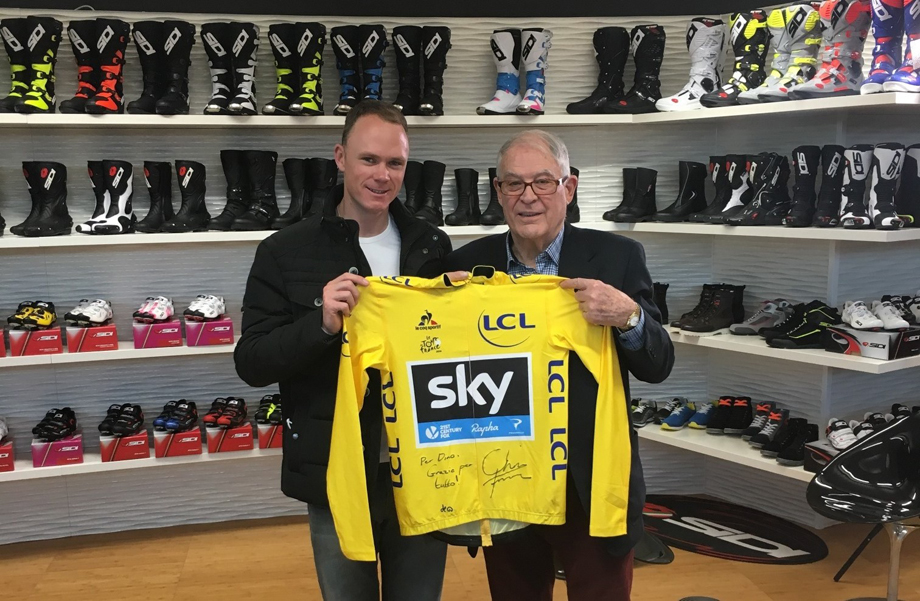 Of course there was also enough time for the British champion to share a toast with all the Sidi staff as they wished each other a Merry Christmas and Happy Holidays. “Here at Sidi I’ve found extraordinary people, both on a professional and a human level; I can’t thank them enough for the way they follow me so attentively throughout the year. I’ve been racing in Sidi shoes since 2010; we share a mutual trust and esteem. We have a constant dialogue and steady relationship that allows us to work well and profitably in developing materials, always striving to find the proper balance between innovation, comfort and performance” says the King of the Tour (and 2nd at the Vuelta 2016). 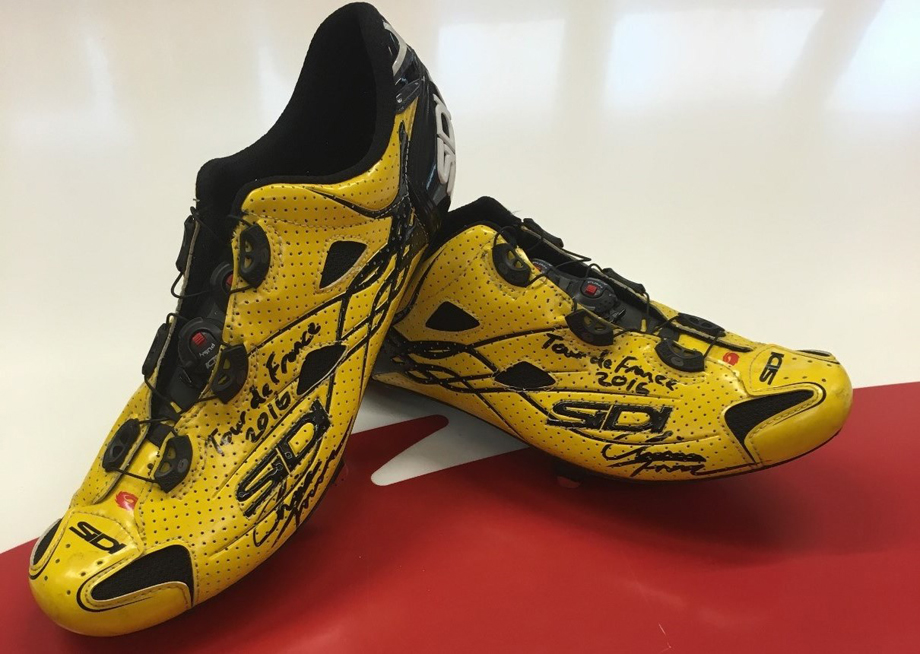 TOUR & SIDI SHOT. This visit also gave us a chance to work on some details and technical aspects of the Shot shoes he’ll be wearing in the 2017 season. Sidi Shot is the shoe with which Froome won his third Tour de France this year. “I was able to get a preview of the Shot in June. Antonio Rossetto from Sidi delivered them to me the evening before the start of the Criterium du Dauphinè, the last major test as we geared up for the Tour. For a rider his shoes are a very touchy subject; making changes during the season is never easy but I can always count on Sidi and Dino Signori. As soon as I saw the Shot and put them on I was immediately impressed, I put my clips on and I wanted to try them out right away. So the next morning I showed up to the starting line with these new shoes, creating quite a stir among my fellow riders in the pack, who were all curious and interested. I felt great from the get go, I won the Dauphinè, and I decided that these would be the shoes I would use for my shot at the yellow jersey.”

For the adventure at the Grande Boucle the Shot got splashed in yellow for a special edition made especially for Chris Froome. The rest is major cycling history, with Sir Froome pulling off an amazing feat at the Grande Boucle. He dominated the race, winning with impressive attacks on the climbs, on the flats, downhill and a great performance in the time trials, proving to be even stronger than some bad luck, like when he was left without a bike due to a fall and ended up chasing after his rivals on foot for a stretch on the ascent to Ventoux (editor’s note: an unprecedented event in cycling). The ones he autographed and gave to Dino Signori, along with the yellow jersey, are the very shoes Froome pedaled with and ran in up that climb on the Mont Ventoux. 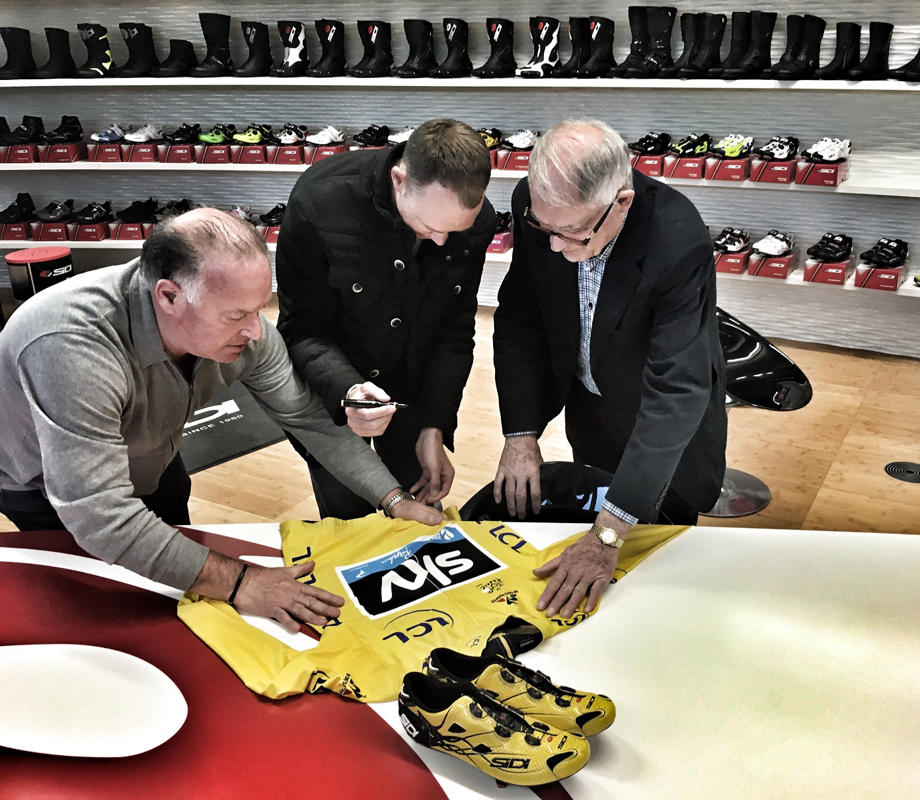 However, not only did Froome shine in the Tour de France; at the Olympic Games in Rio he took home the bronze medal in the time trial race, the second time trial bronze of his career, in addition to the one he won in London 2012. “The Tour is the most beautiful, most difficult race in the world, but for an athlete the Olympics are really something special, for everything they represent. It’s true, I wanted to win the gold, but I also knew my competition, particularly Cancellara and Dumoulin, were very strong. In any case, standing on the Olympic podium with a medal around your neck is a unique thrill that stays with you always,” concludes Froome. 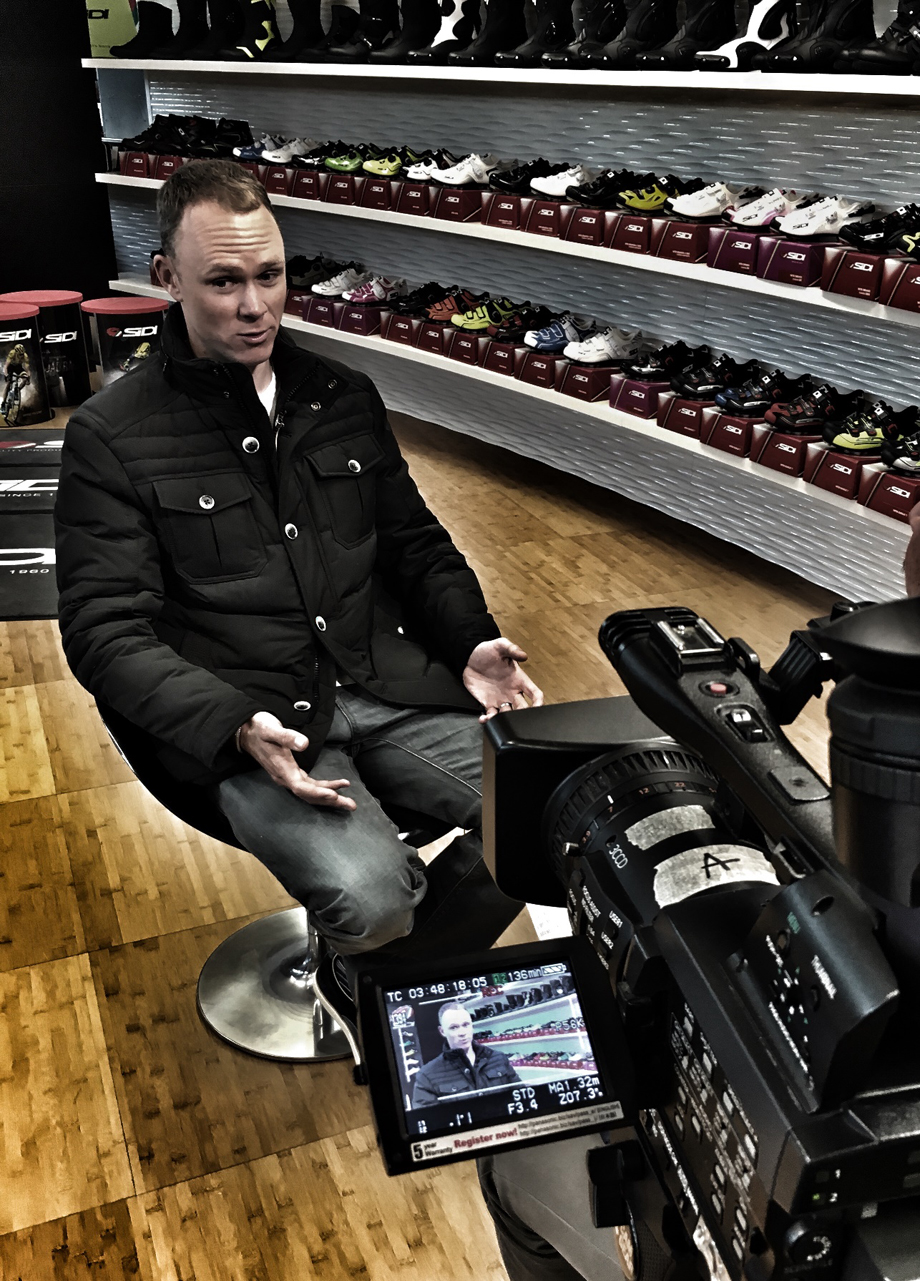 Photos from Chris Froome’s visit to Sidi by ©ATCommunication.
▲ BACK TO TOP ▲
Related Stories
﻿