Rider Interview: Ed Hood has been keeping his keen eye open for more 'Young Guns' in the peloton. The SEG Racing Academy rider line-up is one of the best places to start and the name Harrison Wood stands out for next season. Ed caught up with the 'Up and Coming' rider form Devon to hear his hopes for 2020. 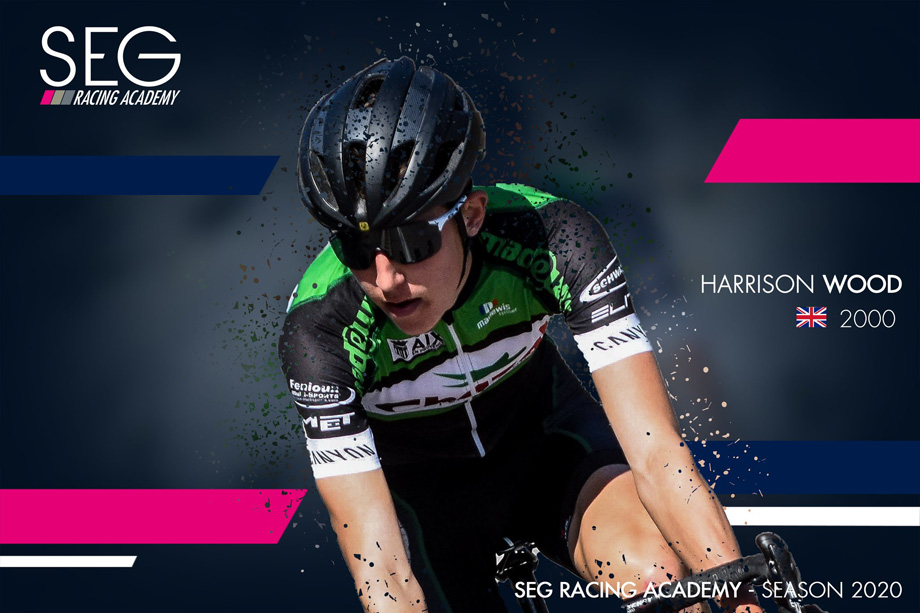 They’re all a product of the Dutch SEG Racing Academy – as one can observe, it’s not just any youngster who gets a ride with this outfit. But ‘Brit’ Harrison Wood, who recently finished a solid top 10 in the Chrono des Nations, will be riding in SEG colours for 2010. Here’s what he had to say to us about his career so far and his move to the u23 Big League:

PEZ: How did you get into cycling, Harrison?
Harrison Wood: I used to play a lot of football when I was younger so I actually only rode my bike for a bit of fun and also to do something when it was not the football season.
I gave up football when I was 13 years-old and started riding my bike a bit more, too and from my dad’s work where I used to help out. It just went from there really but I only really started racing properly as a first year junior due to exams. I owe a lot to the Mid Devon Cycling Club where I would regularly take part in Saturday morning skill based sessions and also then some GoRide race. They also helped support me through the junior ranks. 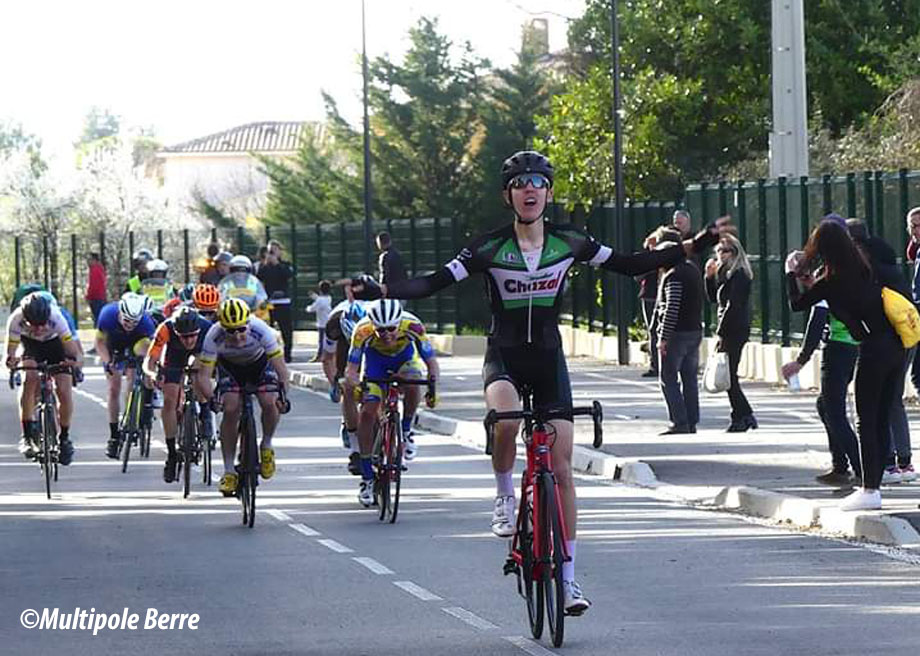 PEZ: Are you a David Rayner Fund man?'
I am indeed a 'Rayner' man. It is a fantastic fund to be honest. This season would simply not have been possible without the Dave Rayner Fund, so I owe them a lot and I'm extremely grateful for their support this season. With the fund also becoming a recognised charity in 2020 it can only bring positives to the young UK riders who have aspirations of racing and living abroad.

PEZ: How would you describe yourself as a rider?
That is certainly a great question! From racing in France this year I have learnt that you need to be good enough on all terrains if you intend to be competitive. I'm only 62kgs in the racing season at around 186cm so I would consider myself more of a climber. I obviously understand that nowadays you cannot neglect other disciplines so I like to also focus and maintain my time trialling ability. Something that I also find helps with those longer climbing efforts but also those days when you are in the breakaway. My sprint from a small group also isn't too bad! 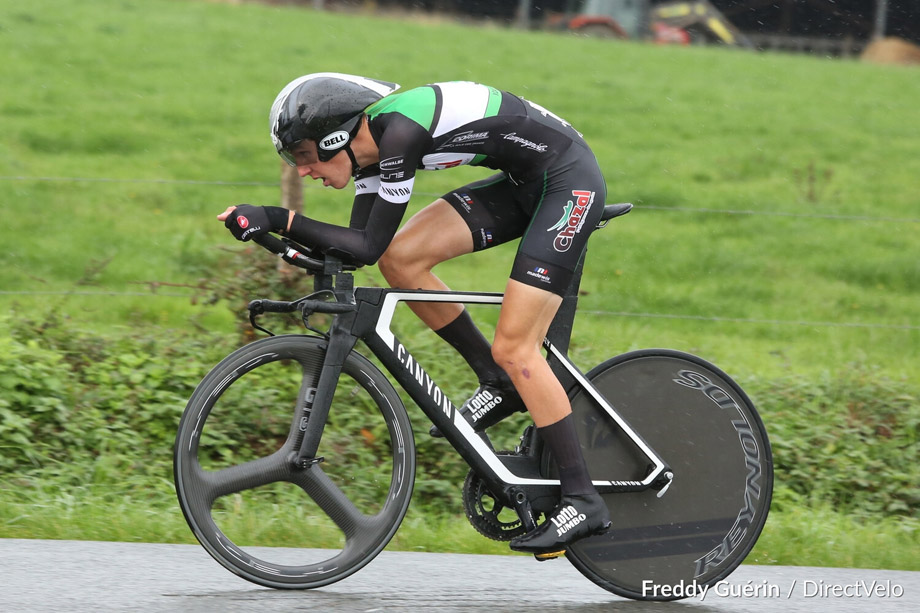 PEZ: You rode a 25 mile time trial in 49:18 as a junior, pretty quick!
Yep that was a nice time I thought! I have always actually enjoyed time trialling and as a second year youth A it was all I focused on due to school exams. I wanted to ensure I had good qualifications because the sport of cycling is very hard and not everyone can achieve their dreams. That year allowed me to do a fair few time trials and a sub 50 minute 25 mile TT as a junior was always an aim... 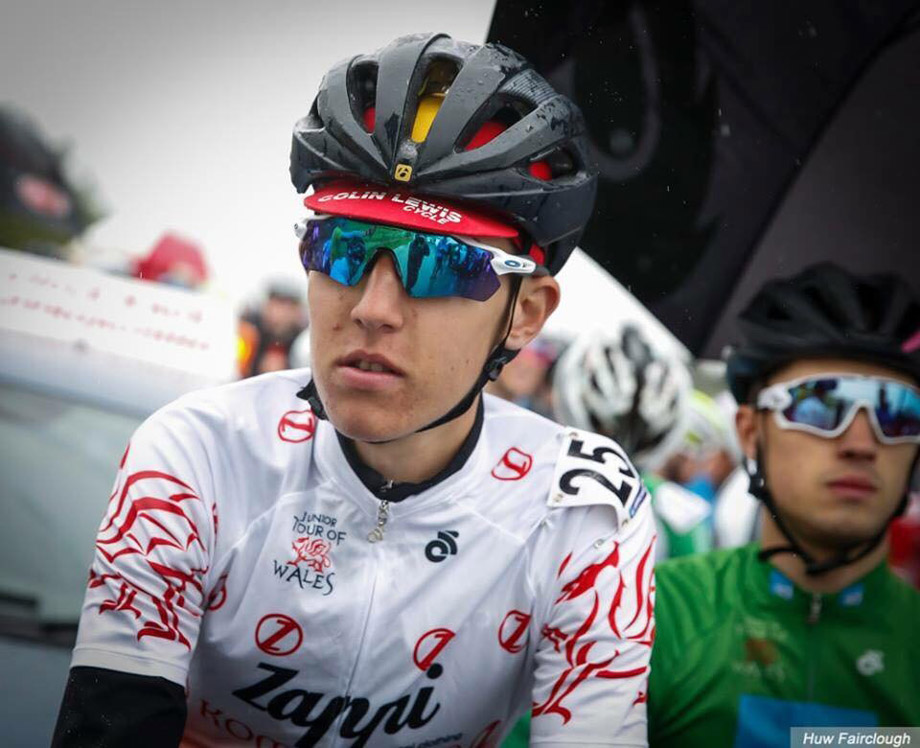 PEZ: Tell us about your Belgian Soenens Boom team, how did you get that ride for 2018?
Quite an interesting story really... I was coming into the second year junior ranks looking to get myself some good racing experiences abroad so I reached out to a Dutch DS/friend Tom Shellekens who managed to find me a place on this team. It was to be self-funded but they had a nice calendar. I could race in the UK for Mid Devon Cycling and receive their support whilst also sampling some high quality races abroad such as Nokere Koerse, Aubel Thimister Stavelot and E3 Harelbeke. 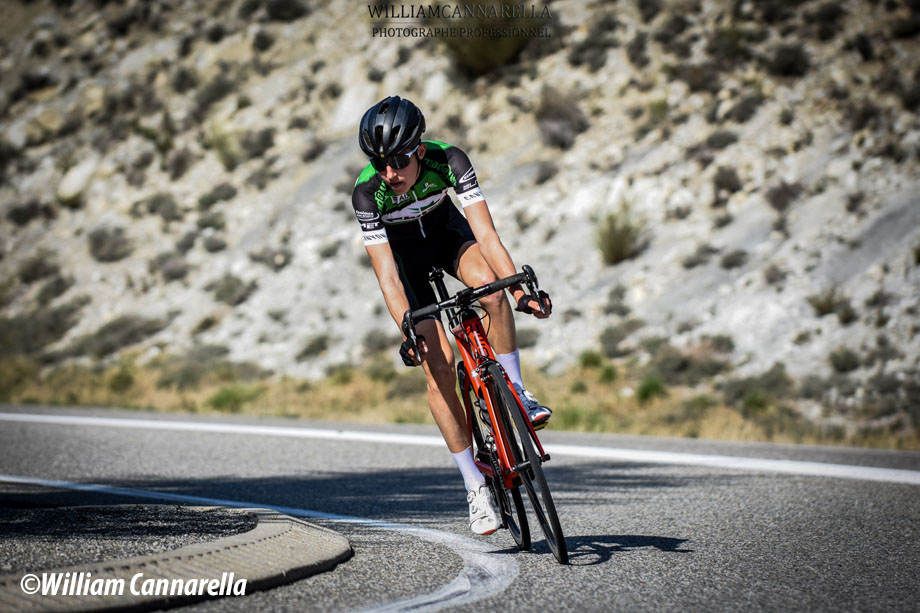 PEZ: In 2018 you rode in Poland and Spain - was that with your Belgian club team - were they good experiences?
Poland was certainly an experience... it was carnage to be honest. It was almost like a war just for the gear check. I learnt a lot there whilst also picking up a fifth on a stage in this UCI 2.1 stage race. I raced in Spain with HMT cycling team who were running a small European calendar. Soenens allowed me to race with them which was very good of them and meant I could show myself on the hillier terrains. I was sixth overall in the Junior Basque Tour. This was a good experience of racing up some proper mountains and also showed me that I wanted to race on the continent in 2019.

PEZ: AVC AiX for 2019, why the move from Belgium to France?
I only really raced in Belgium a handful of times due to the cost of actually getting there from the South West of England. For me as a first year u23 I was looking to get myself abroad in either Spain or France to show myself on the hillier terrains. I reached out to a handful of teams and AVC AIX were the biggest team that replied to me... They had a great calendar and also a pressure free zone which meant I could learn and never feel under huge pressure to perform. Something I enjoyed being only 18 years-old. 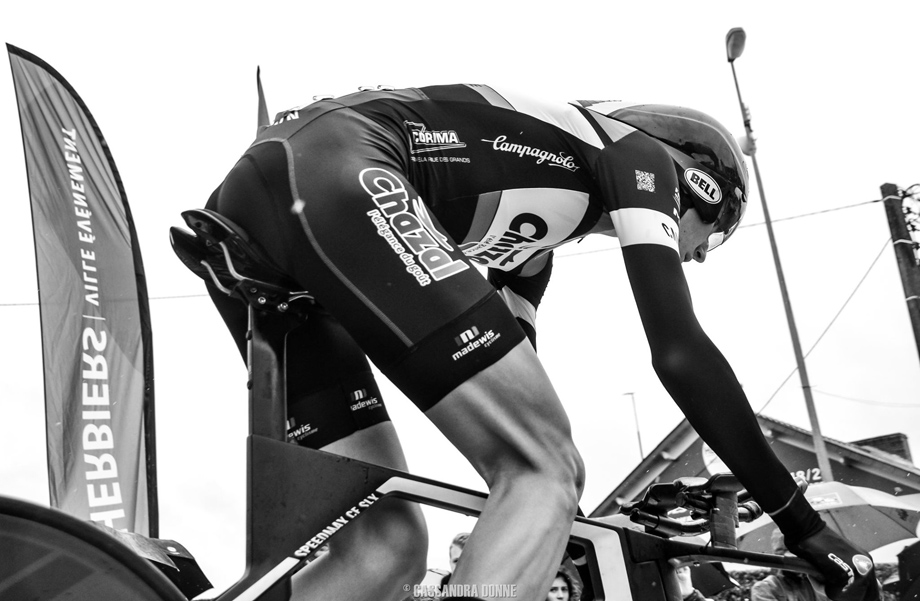 PEZ: Was it a good set up?
It was a nice setup, definitely. The south of France isn't too bad a place to live I guess... I was well looked after at races and enjoyed a nice mixture of races from hillier French Elite Nationals, Italian UCI events, mountain races to short technical local criterium races. It really allowed me to try and develop all aspects of my racing whilst also learning a lot about myself off the bike due to living abroad by myself for much of the season. 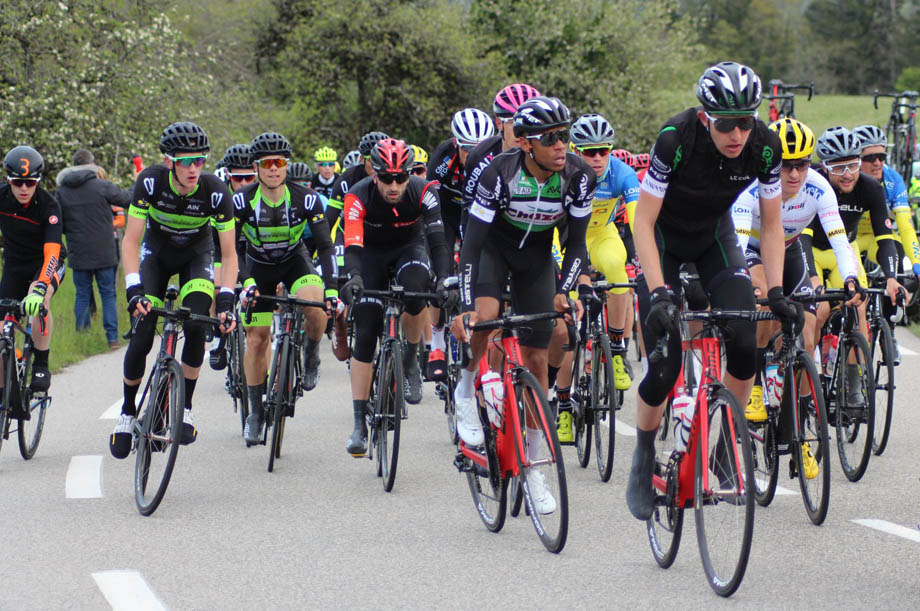 PEZ: How has the leap from junior to u23 been?
It has certainly been a very rewarding experience. The races are longer and typically faster but not always as hard. Junior is always just full gas, whereas a lot of races I have done this season have been controlled 'ish'. The off the bike side of things have been hard I guess as I have missed my family but due to social media and technology I have kept in contact regularly and have also visited home a few times which has kept both myself and my parents happy! I have also learnt to cook a lot this year and feel I'm pretty self-reliant which I guess is rare for a 19year old nowadays... 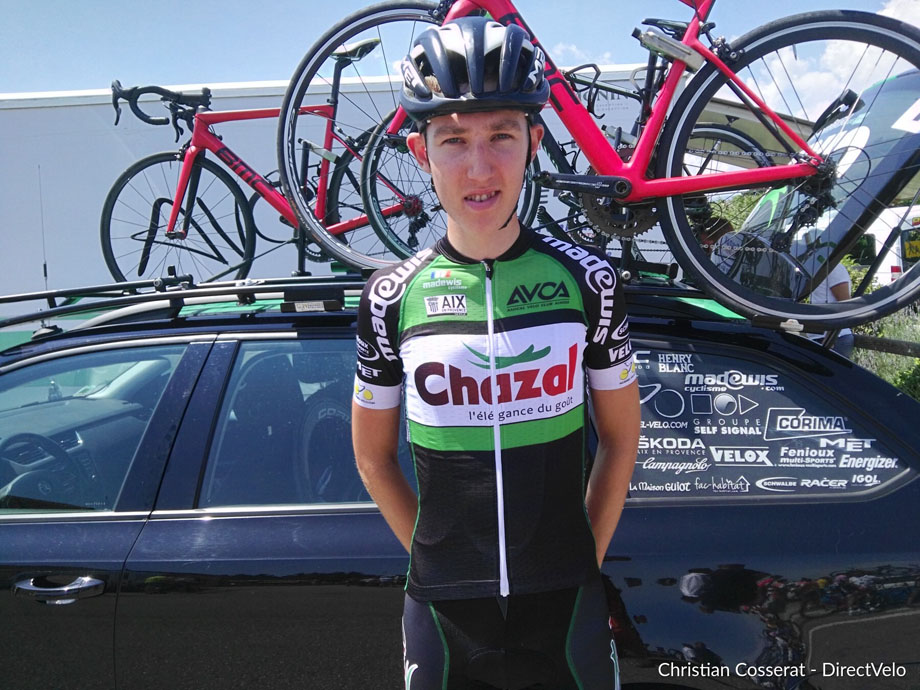 PEZ: Was it with AiX you rode Valle d'Aosta - tell us about that experience?
Yep I rode Aosta with Aix. It was quite frankly awful from my end. The first stage I was taken the wrong way in the select group chasing the break. I felt good and then the peloton decided to protest meaning a lot of guys GC chances had gone I guess. But then from there it got a lot worse. I was ill on the second day throwing up and unable to eat much meaning the third day was a damage limitation day for me. I got round but once again I was feeling sick. I started the fourth stage but I knew it wasn't going to be good. I struggled to eat and drink in the stage and once again was throwing up on the bike. The medics told me to stop and sadly I was a DNF...

This was really disappointing and made even worse when a week later I was involved in a crash in a race and broke my wrist. It was a very tough period for me this and I'm grateful to the support of my family and friends who helped me to stay motivated. 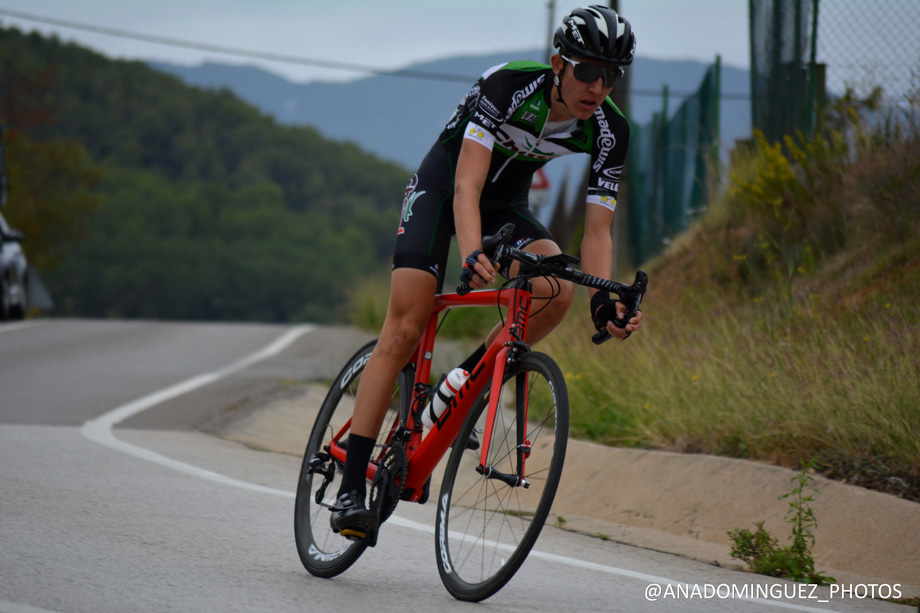 PEZ: The Chrono des Nations - how did you get that ride and what was the experience like compared to a UK time test?
I chose to ride it by myself unsupported by Aix. It was basically on the way home from the South so my dad also came to give me a hand. It was a great experience and really well organised. The weather wasn’t great and the course was actually fairly technical so it was about limiting risks on the technical wet corners. I felt I rode well and taking ninth whilst being first year u23 was also a nice reward after a long racing season. I started in late January so my legs can definitely feel the effect of around 56 race days. It was similar to the UK national TT course where I was 10th, those courses suit me more than the typical UK CTT out and back on a flat dual carriageway course. The Chrono was also a bit longer being a 43 min effort compared to the UK TT champs at around 30 odd minutes.

PEZ: Tell us about your other 2019 results.
I actually started off quite well with two top 20 places in my first two elite nationals on rolling terrain. After that I took a stage win in the Multipole Berre race. I then began to race bigger races and got second overall in the Volta Castello in Spain whilst taking second on the queen stage (summit finish at 1500m) and third on the first flat stage of that race. I took 10th overall in the UK national TT championships which was pleasing. I was also was able to take 12th in the Bourg Arbent Elite National, a race where I was battling Frenchman Clement Champoussin and American Matteo Jorgensen on the final climb - both of whom are going World Tour in 2020; AG2R and Movistar respectively. I also won a UK road race, the ‘Tom Hawkins’ whilst I was back for a break from continental racing. 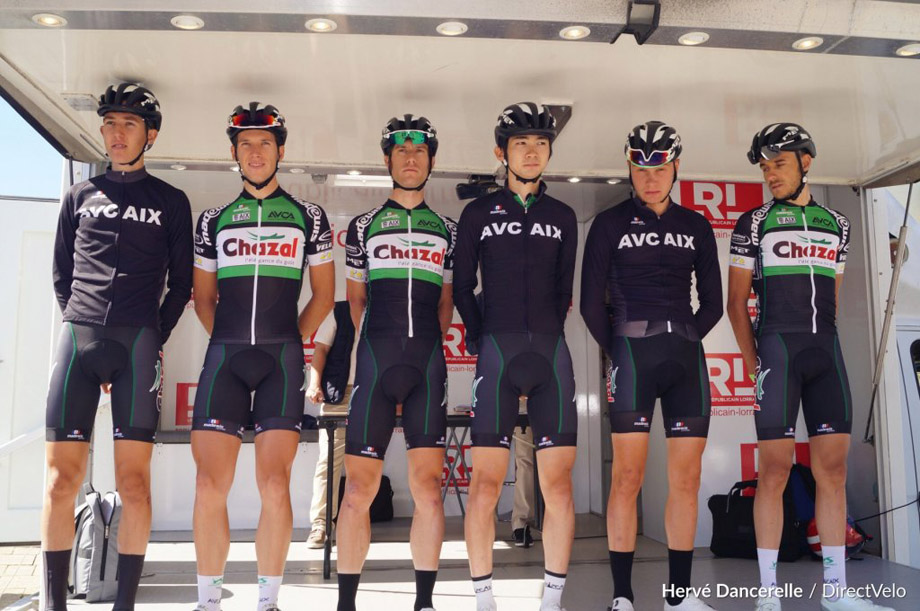 PEZ: SEG Racing Academy for 2020, a top team, how did you get that ride?
Yep it is simply an incredible opportunity for me to learn and develop in the best environment possible for an under 23 rider. I have been in contact with Bart Van Haaren for a while. We had a few calls and I did some performance tests for the team. After that, I was offered the opportunity of racing for SEG Racing Academy and obviously I was not going to say ‘no.’ I feel like is a great match, I want to learn and they have a program fully oriented to the rider's development. It takes a special mind set and commitment to go to a foreign team as a young U23, but at the Academy they know that and the environment is really friendly in that sense. 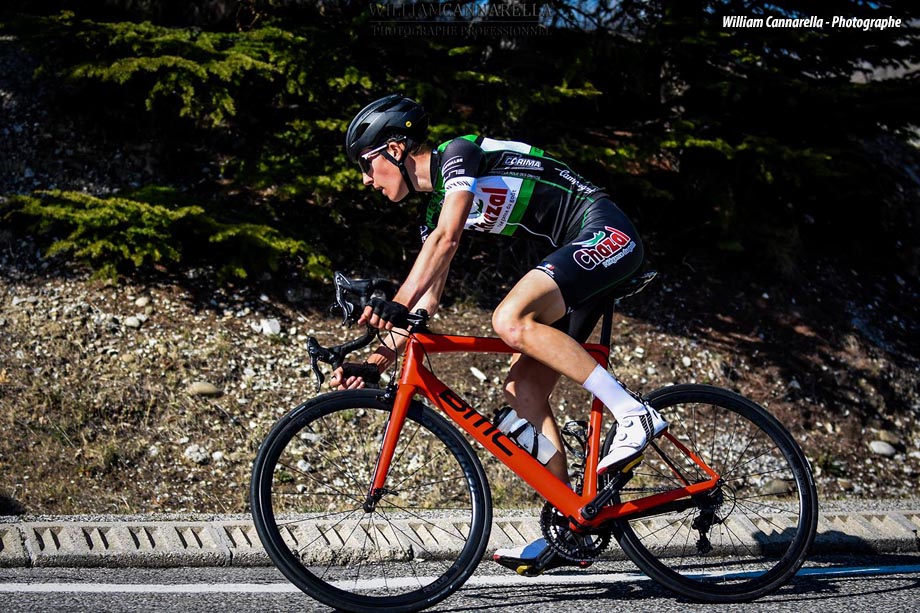 PEZ: Will you be living over there?
I'm lucky enough to be living in Girona and using that as my base for the season, this will be incredible for training. I will still come home to the UK from time to time to see family and obviously ride the national championships. 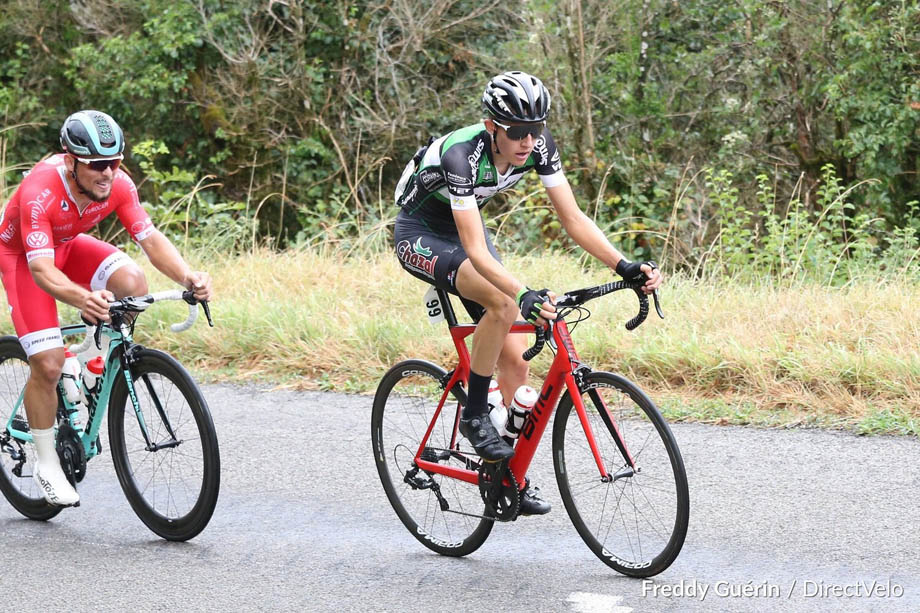 PEZ: 2020 is about . . . .
Learning, developing, winning as a team! soaking up a lot of different and new experiences.

# Oh to be young! PEZ wishes him well for 2020. Information on the Dave Rayner Fund HERE. #