Rider Interview: Riding the Race Across America is one thing, winning it is another, but winning it six times is just taking it too far! Christoph Strasser is the man who achieved that remarkable feat, winning the 3000 mile - 4828 kilometer - race six times. Ed Hood caught up with Christoph to hear all about it. 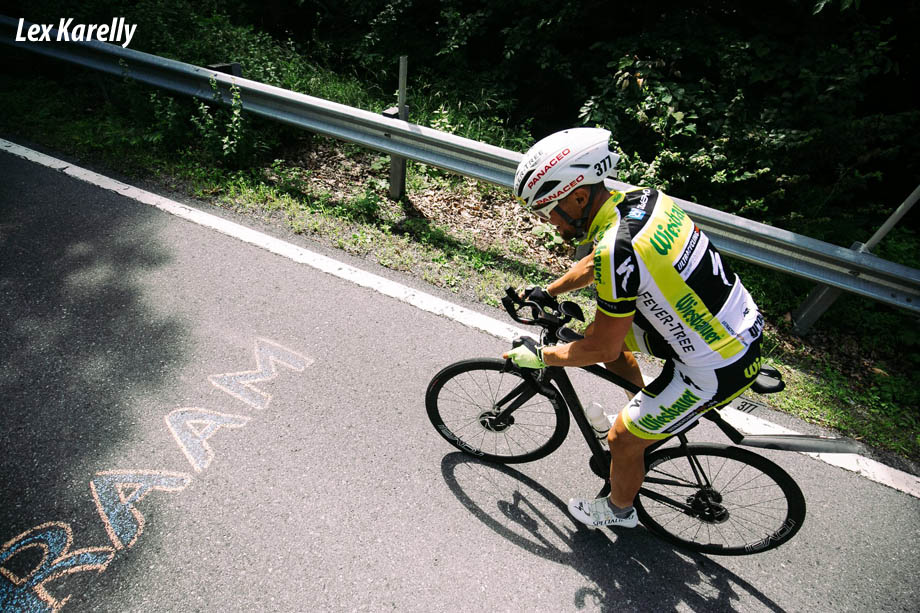 Race Across America - It's a long way!

Back in the day when I was involved in running an amateur cycling team in Scotland, I remember the hassle we had trying to get guys to ride the National 100 mile time trial championships to make up a three man team. ‘It’s an awfully long way. . .' They would tell me. 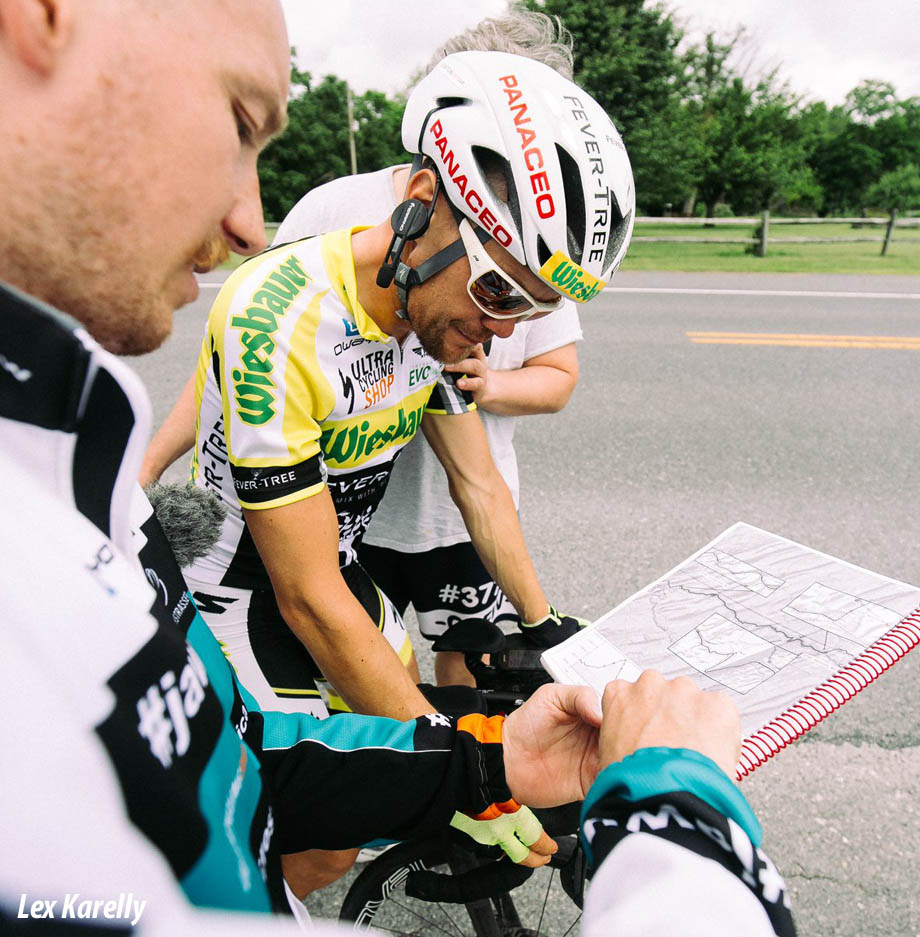 It would be interesting to hear what they had to say about a 3000 mile race – that’s the distance of the Race Across America, the legendary RAAM. First run in 1982 it’s the premier ‘ultra-distance’ event in the world. The 2019 race was won by a man who’s already won it five times previously – the undisputed king of the ultra-distance riders, Austria’s Christoph Strasser. We caught up with Christoph a week or two after his epic ride – by his own admission, the hardest RAAM he has ever participated in. 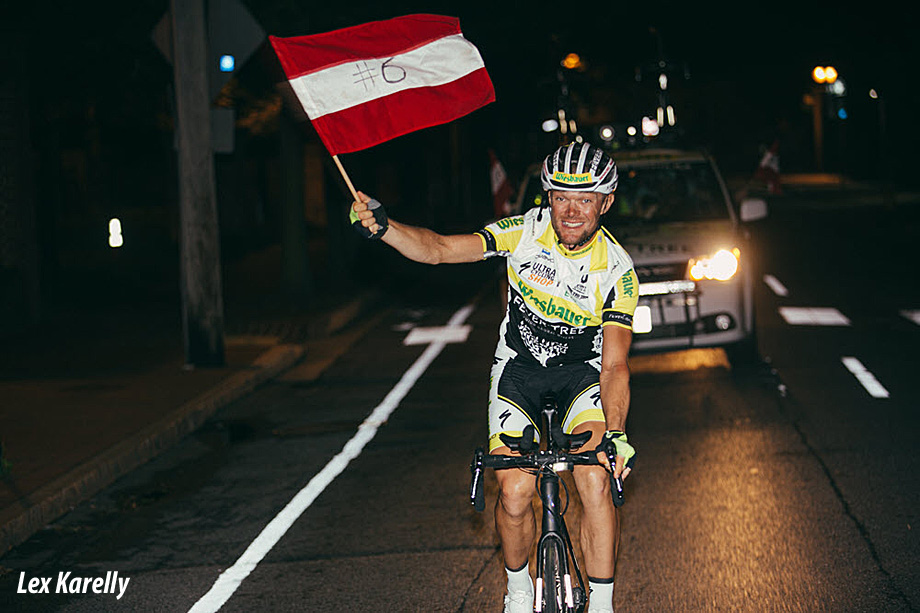 PEZ: Congratulations on your sixth RAAM win, Christoph – let’s go back to the beginning, how did you get into ultra-distance cycling?
Christoph Strasser: When I was 20 years-old I quit soccer and began to ride my mountain bike as a hobby, I used to ride it to school and do 15 kilometer ‘fun rides.’ I heard about the Race Across America and became fascinated by it and in 2002 I rode a 24 hour race. I was just a young guy doing it for fun with no specialist cycling jersey or shorts. I rode it for a few more years and decided I wanted to get more intense about it so I began to train properly and pay attention to my equipment and clothing. 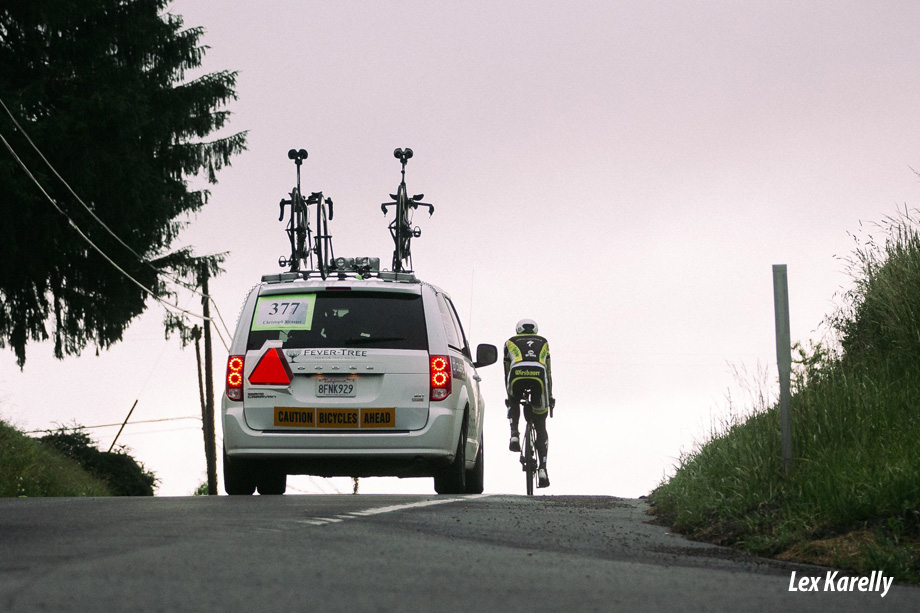 PEZ: Tell us about your training.
In my first years I made my own training plan; it was all about long, long miles with one 12 hour run per month included. But I have a coach now, he sends me my schedule a few days in advance and the focus is on recovery, as well as work. I do much more high intensity work now and power training - using a big gear up long drags with a low cadence around 55 rpm. I still do long rides but not the seven and eight hour runs I used to do. My FTP is 5 watts/kilo, I weigh 78/80 kilos and can generate 400 watts for one hour, which is good for a long distance rider. You have to strike a balance in training; if you do just endurance then you’ll never get faster but if you concentrate just on power then your endurance will suffer. My average watts for RAAM is 160/170 which is what I would usually produce on a recovery ride. In 2018 when I did 913 kilometers for a 24 hour time trial I averaged 256 watts. 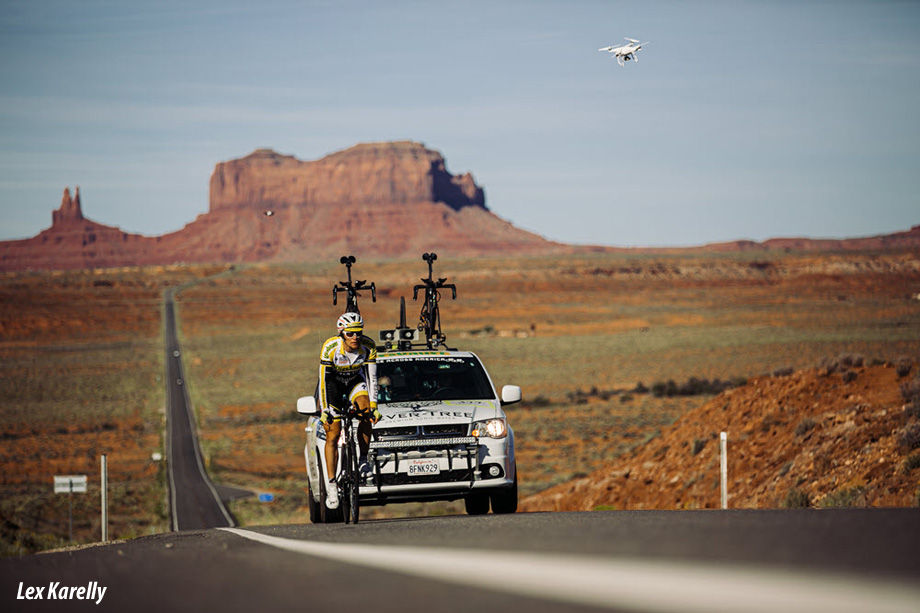 PEZ: Where does the motivation come from to keep returning to the RAAM?
For me it’s more than a race, it’s part of my life. I’m lucky that I have sponsors and my motivational speaking so I can make my living from racing, it’s my life. I’m still fascinated by RAAM, it’s sport and it’s adventure too - crossing a whole continent. I aim to become the best cyclist I can be and what I learn from competing in RAAM helps that process. But the reason so many people only ride RAAM once is because it’s so expensive, I’m so thankful to my sponsors who support me and enable me ride it again and again. 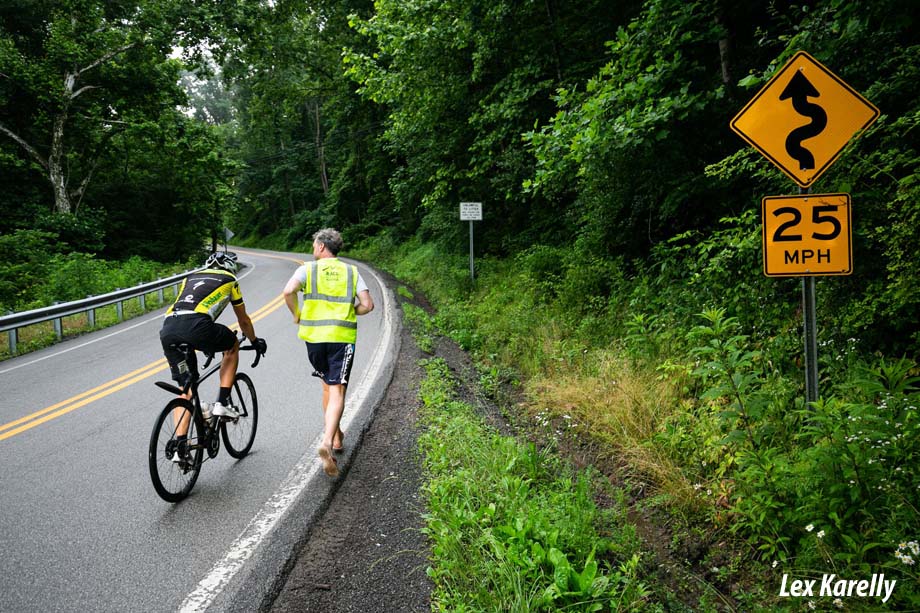 PEZ: You said RAAM 2019 was your toughest ever?
It’s always tough but to undertake a race like that and not expect to have problems is unrealistic and you always suffer a lot. But 2019 was the toughest ever, the first two days were very hot then The Rockies were very cold, zero degrees at night. On Wolf Creek Pass you’re at 3,300 meters and there’s a lack of oxygen then in Kansas you have the long, straight, flat roads with cross and head winds - that’s a really boring section. And in the second part there was so much rain, I was surprised, I’ve never seen rain like that in the race before. The skin on my hands and feet really suffered as a result of that. It was really tough and meant I had to take more breaks to change into dry clothing. With that rain there were floods too which meant detours, you have stop call race HQ and ask for the alternative route, that breaks your rhythm. But by then you’re tired and the sleep deprivation is affecting you - it’s even more difficult on roads you don’t know. 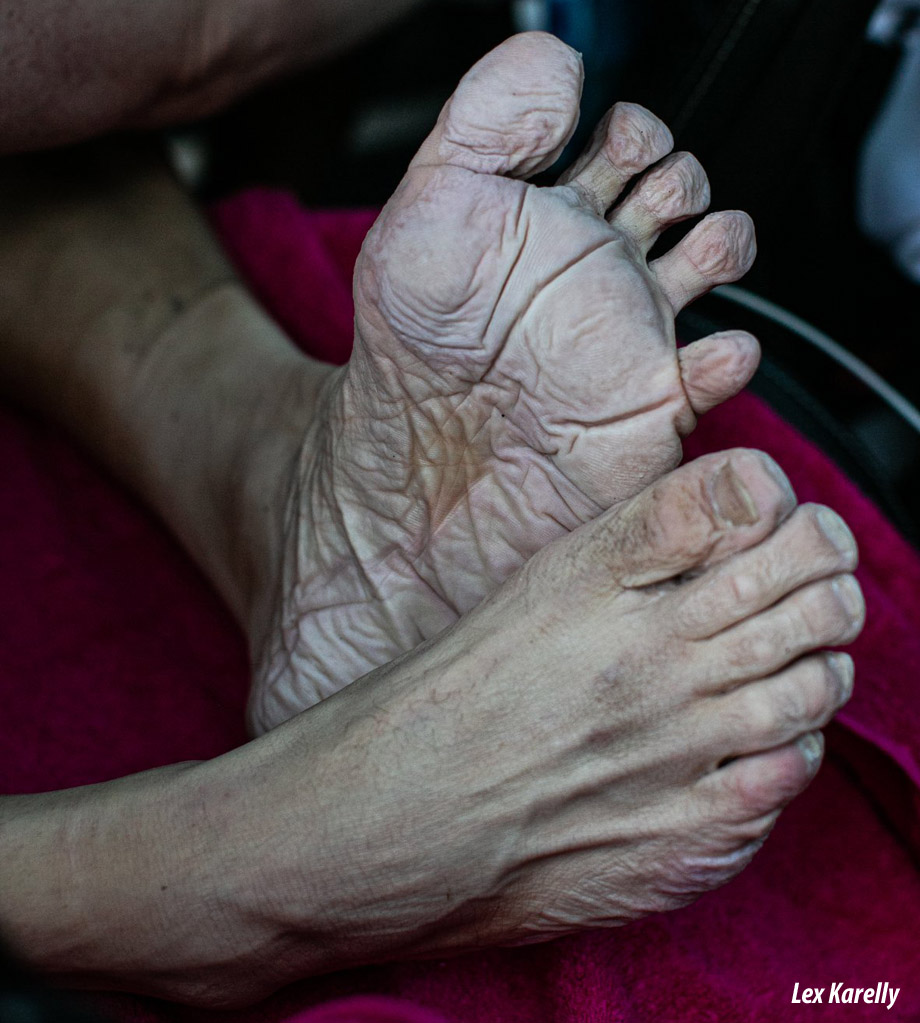 Christoph's feet due to the rain

PEZ: Which are your least favorite parts of the RAAM route.
I have two; there’s the stretch from Durango to Pagosa Springs in Colorado, where The Rockies begin; the traffic is heavy and there’s no shoulder to ride on - and on that stretch your following car isn’t allowed to follow you from 07:00 am to 07:00 pm, it has to leapfrog you. The police don’t want you to negatively influence the traffic flow - and when you hit that section it's ‘rush hour’ with folks driving home from work. The second part I really dislike is the last 50 miles; you think that now you are over the Appalachian Mountains it will be downhill all the way to the finish - but it’s not, it’s hilly with a lot of traffic and traffic light where you have to stop. 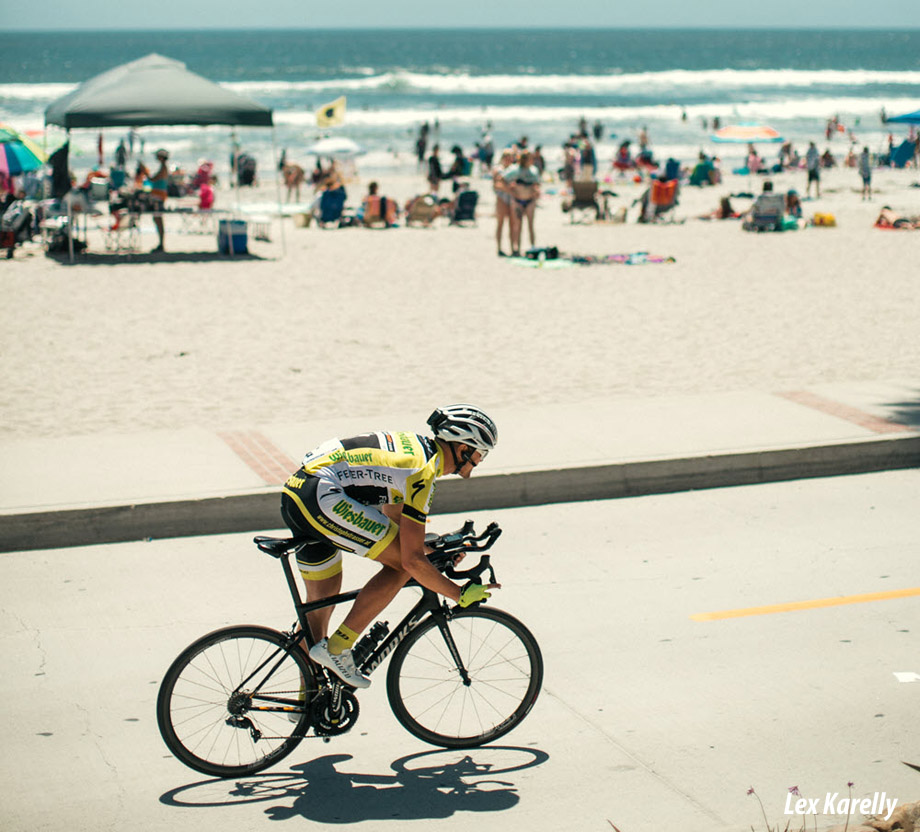 No time for the beach

PEZ: I believe that crazy motorists can be a problem?
You get the scenario where the motorist drops the gas pedal and covers you with smoke and soot (so called ‘coal rolling’ ed.) I’ve had that a lot of times. In California and Arizona the drivers are relaxed and friendly but when you get into the Mid-West and Appalachians the people are different, covering you in black gas clouds and trying to run you off the road. One time a guy drove alongside me and started shouting negative stuff at me, he drove ahead, spun round then came back towards me on the wrong side, only veering away at the last moment - I was really afraid. 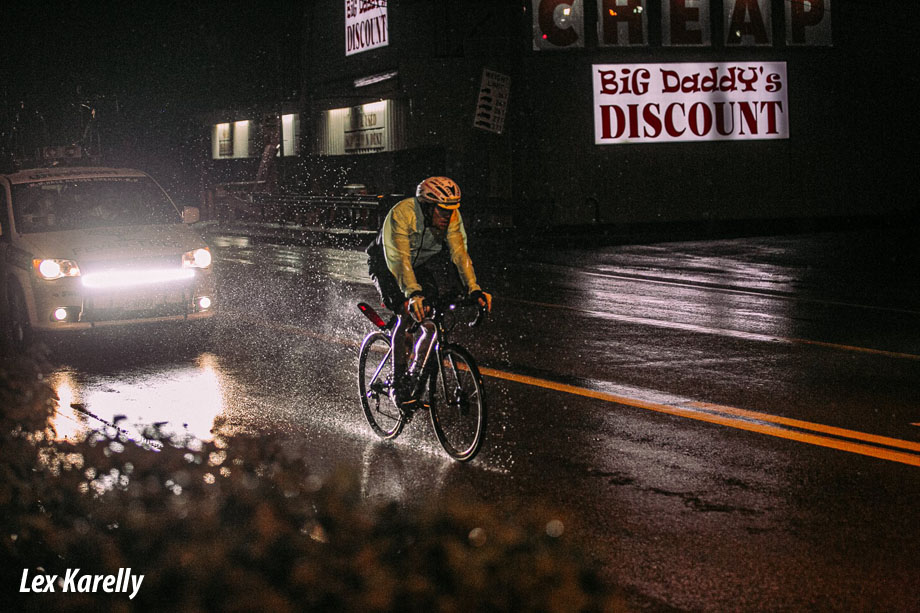 Rain during the night

PEZ: Are there other ultra-distance races around the world?
Yes, it’s a highly evolved sport with races in Austria, Ireland, Switzerland, Italy, Slovenia, India and New Zealand. They’re well supported and it’s growing all the time but RAAM is the oldest and most important. 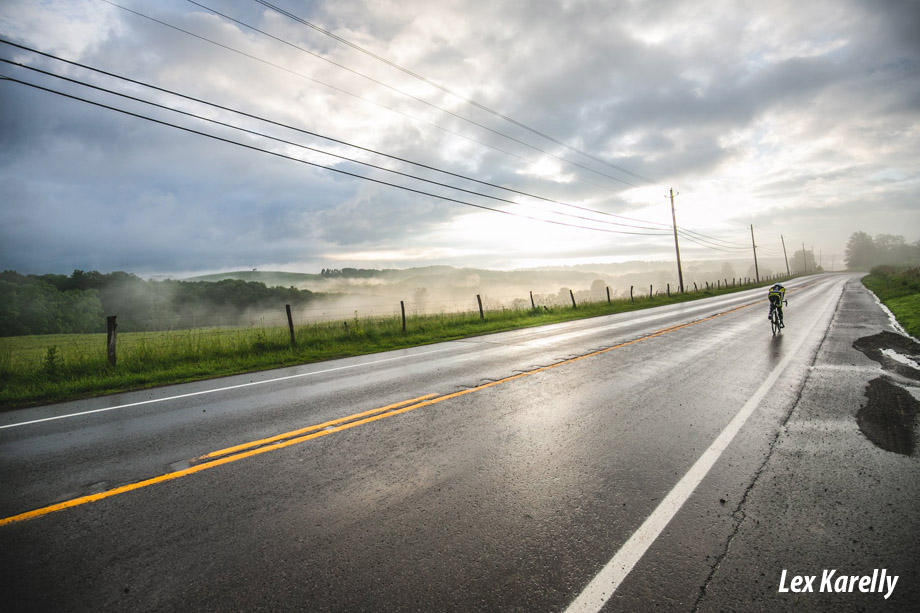 PEZ: Tell us about your RAAM bike.
I use three in the race, all Specialized. For climbing I use the Tarmac which is light and responsive. On the flat sections I use the Shiv time trial machine and on the downhills and rough sections, especially if it’s raining, I use the Roubaix with disc brakes. We change bikes when we think it’s necessary. The Roubaix has 28 mil. Specialized tubeless tires, they’re very comfortable and we had no flat tires. We ran 26 mil. Specialized clinchers on the Roubaix and Shiv but with self sealing compound in the inner tubes. We only had three flats the whole way - which is good because wheel changes break your rhythm. I have a mechanic with me as one of my 11 man support team, when I have my one hour sleep each night he gives the bike a full check - tyre pressures, lubrication. . . The roads are very bad in the US with glass, dirt and lumps of truck tyre rubber - European roads are much better. 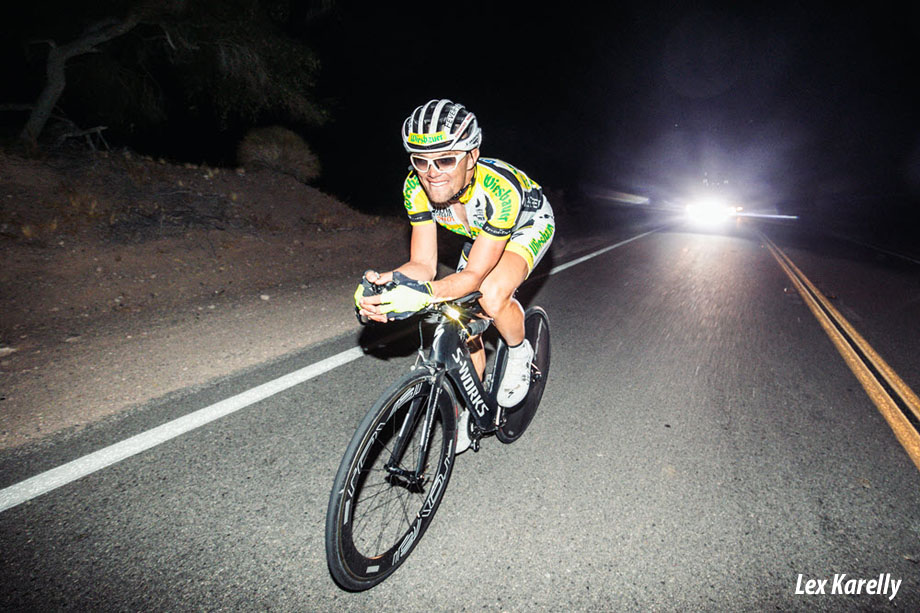 PEZ: Clothing?
If it’s dry then I only change after my one hour sleep; a clean jersey and shorts. If it rains then I change into dry clothes more often. You must be meticulous about hygiene in your seat area, you do not want bacteria there. I rode a lot of saddle and shorts combinations before I found the perfect combination, the pads in my shorts, which are made by Owayo are perfect for me. If you ride a lot then you should try different saddles and shorts until you find a perfect combination; and always use the best chamois cream - you must protect your skin in that area. 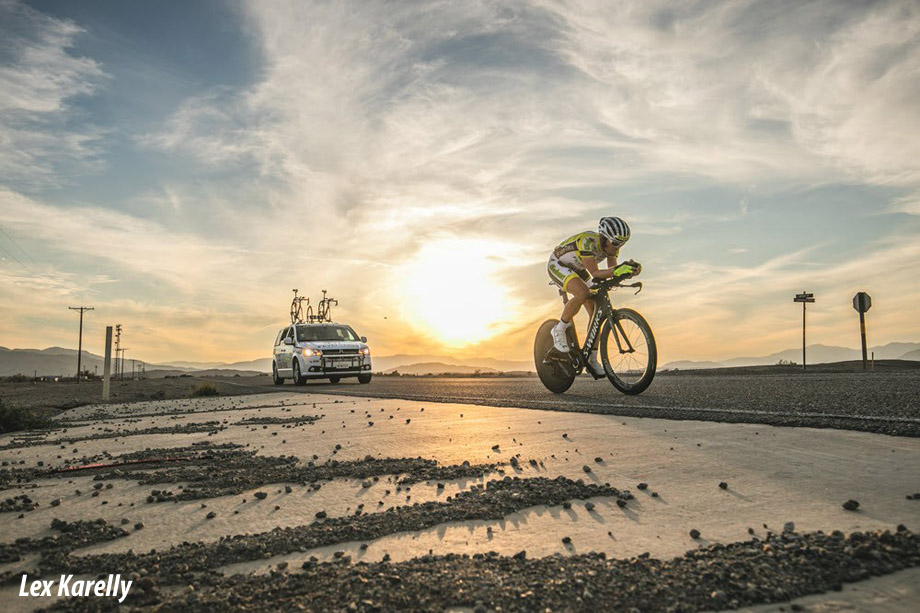 PEZ: Nutrition?
It’s a key factor in RAAM, you only ride well if you ingest sufficient calories; we’ve discovered that a complete liquid diet is best, it means that the stomach doesn’t have to work hard to digest. The liquid food we use is designed for hospital use by people who have had operations on their teeth and gums. The thing is that after a couple of days you are unable to listen to your body because of the tiredness and sleep deprivation. It’s up to your team to tell you when and what eat and drink. But you must be careful not to drink too much or your body retains the water and your face and body swell. In a worst case the water gets into your lungs and you can get pneumonia. This has happened to me so your crew have to carefully monitor what you drink. 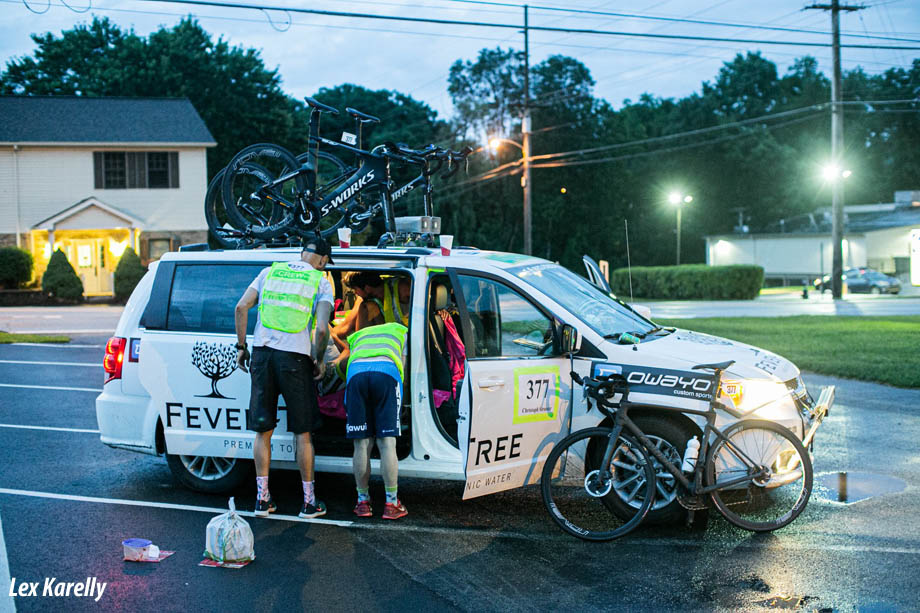 Not cheap to ride the RAAM

PEZ: What does a RAAM participation cost?
To do it at a professional level €50,000 and that’s with my 11 man crew doing it for free; but you have flights, expensive ‘one way’ car hire, communications equipment, excess baggage and all the rest. I’m very happy that I have sponsors so I don’t have so much work to do; I did at the beginning but after I was successful I got sponsorship. But getting the funds together is part of the ultra-distance game. Like I said, that’s why many people only ride it once - because it costs so much. The entry fee alone is three or four thousand Euros and there’s no prize money - but I like that, it means cheating is less likely. I make my living by sponsorship, doing lectures and writing books. 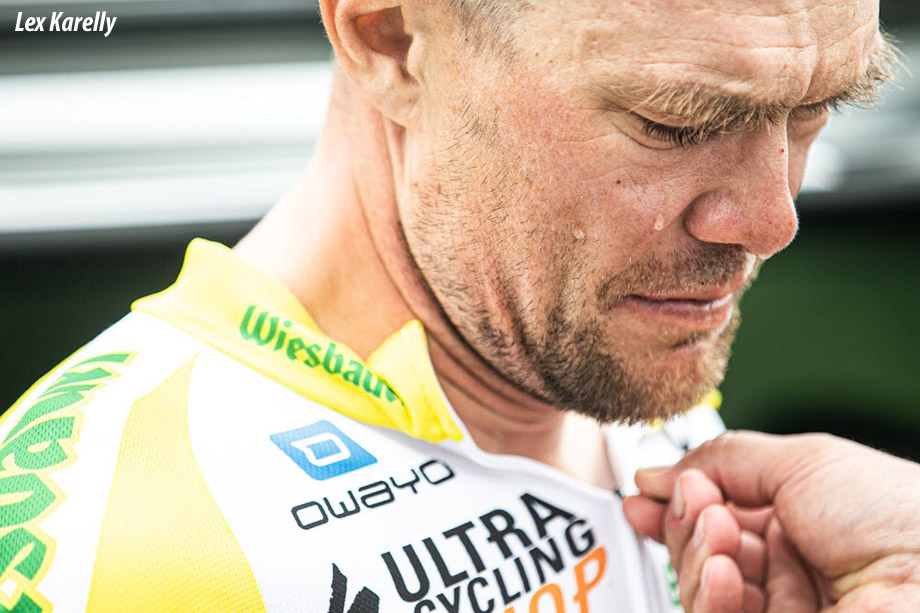 The pain of ultra-distance racing

PEZ: Recovery from such an effort?
It’s not always the same but this year it was quite fast. Obviously you eat and sleep a lot and you’re in pain and tired - it’s difficult to walk, your back side and knees hurt a lot but that passes after three or four days. After a week you maybe party a little and do some easy rides but it will take two or three months before you’re back at the level you were before the race. You have problems with the nerves in your fingers for a long time after, from the vibrations off the tri-bars, I couldn’t write or use a knife and fork for four months. 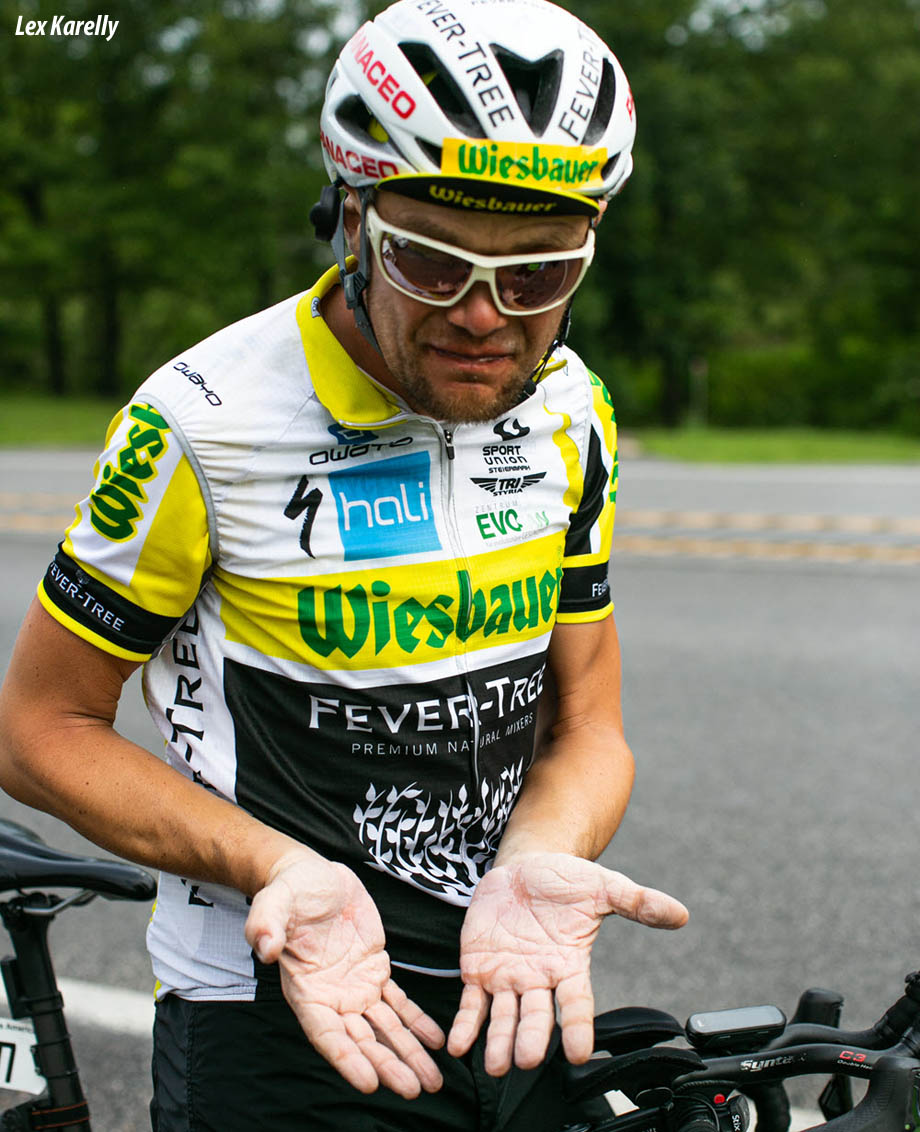 PEZ: What’s the next challenge?
The Race Across Austria as part of a two person team; I’ve done it solo three times but this will be a new challenge. I won’t ride RAAM next year, I’ve been riding it for 10 years with six wins – but I‘m not saying I won’t ride it again. I have the world record for 24 hours on the road with 896 kilometers and on the track with 941 kilometers. I think that 1000 kilometers in 24 hours is possible if conditions are perfect – that’s my dream. 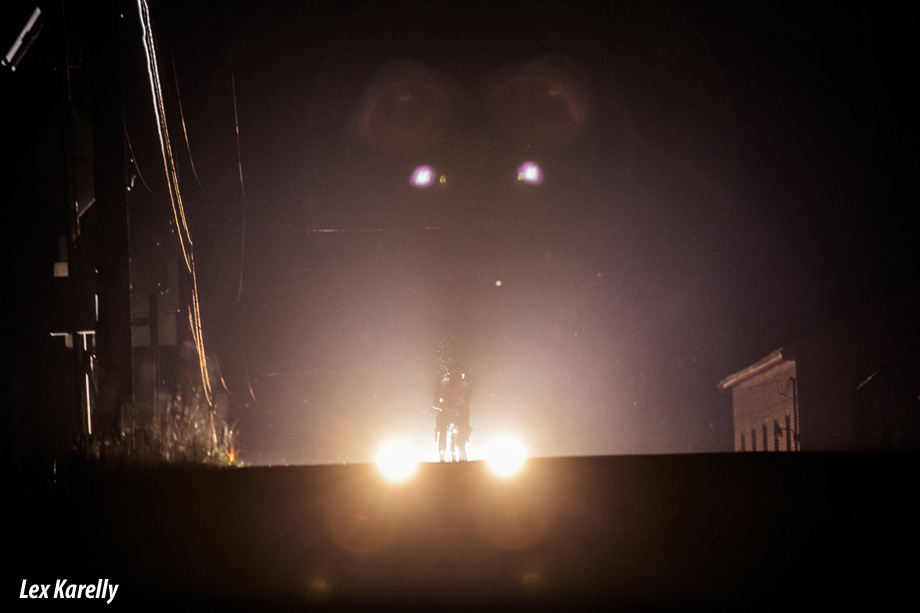 # Thanks to Christoph for his story and Lex Karelly for the photos. # 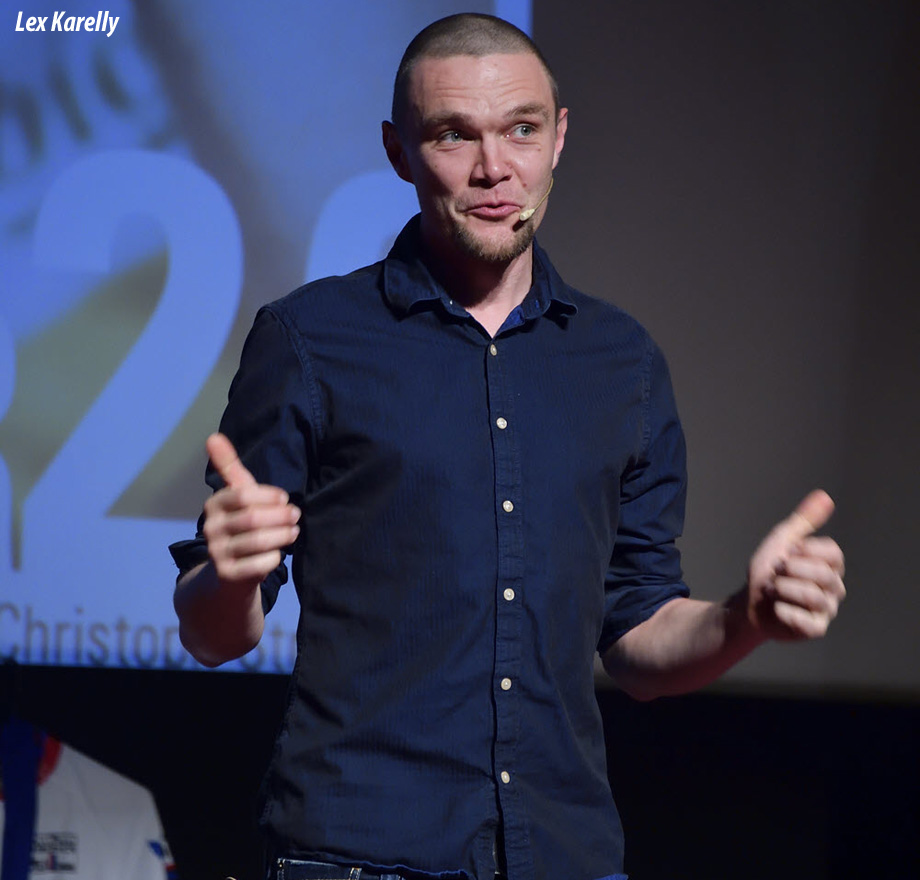 On the lecture circuit