INTERVIEW: The Tour of America's Dairyland powered by KwikTrip runs June 20-30, 2019 and registration is open. For a deeper look into what's cool about this great race, I talked with young racer Henry Lutz of the Project Echelon Racing cycling team.

Play this video to watch our 10 minute interview - and subscribe to see more at the PEZ Youtube channel here. - or scroll down to read the full transcript. 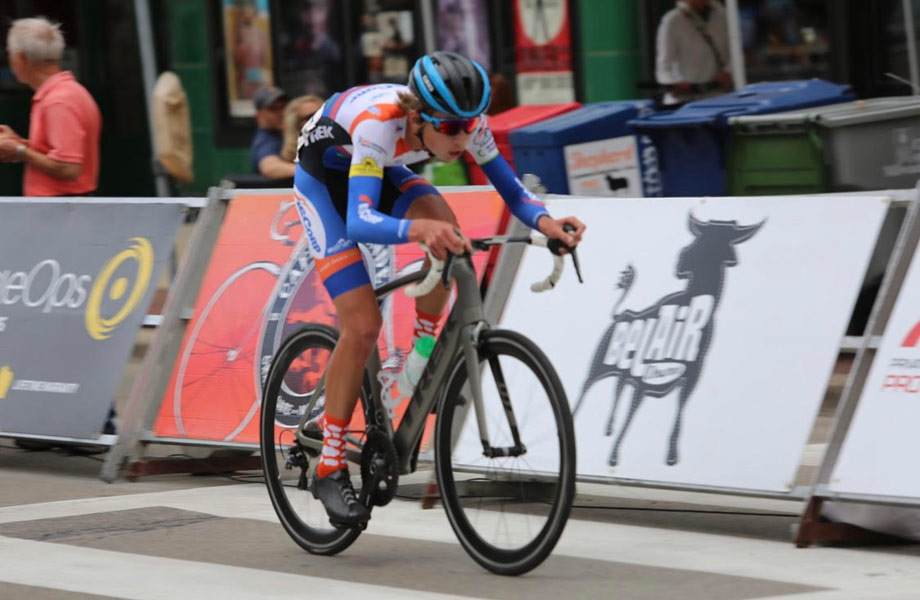 Henry's not afraid to go for it.

The Henry Lutz Interview Transcript
Pez: Pez Fans!  Thanks for tuning in. Welcome back to the program. Today I am talking with young racer Henry Lutz about this year's upcoming tour of America's Dairyland, one of the great races in the United States and anywhere actually, and we have talked to a lot of people in the past about this race, but generally people that have been involved for a number of years, guys like Tom Schuler who organized the race, Rahsaan Bahati who's been around for a long time. Henry is the first young rider we've talked to and I think it's going to be really cool to hear a perspective from somebody at the other end of the spectrum. Henry, welcome to the program. Welcome to Pez. Thanks for joining us to talk about TOAD!

Henry:   Yeah, thanks for having me. I'm really excited and talking about TOAD with you guys.

Pez:  All right. Okay, well then awesome. Let's get started.

Henry:  So this year is my first year out of the junior ranks and it's with Project Echelon Racing, so I'm really excited to get racing with them some more and show up to TOAD with them and racing a P1 2s.

Pez:   Okay, cool. So Project echelon Racing, tell us a little bit about that team.

Henry:    Project Echelon is a nonprofit and they educate, empower and equip veterans through physical activity. We worked with veterans in triathlon, cycling, running, and there's most endurance sports. So our team director, Eric Hill, founded the nonprofit a couple of years back with one of his buddies who is having this issue and that's grown tremendously and now they support our racing team and we also give back and support the veterans. So just a couple of guys on our team like coach and mentor veterans through their endurance athletics and it's really fun to see.

Pez:     Are there any actual veterans on the team participating actively with you guys as a racing team?

Henry:  No, there's not any veterans on our elite squad, but there are a lot of veterans who raced with our Jersey and race locally around the country.

Pez:   Will they came out and join group rides or training camps or anything like that?

Henry:   Yeah, we'll have some of our riders show up for some group rides if they are local to Wisconsin for sure. Do a group ride on Wednesday nights from a fellow city bike shop in Pewaukee and there'll be some of those guys who show up to that. 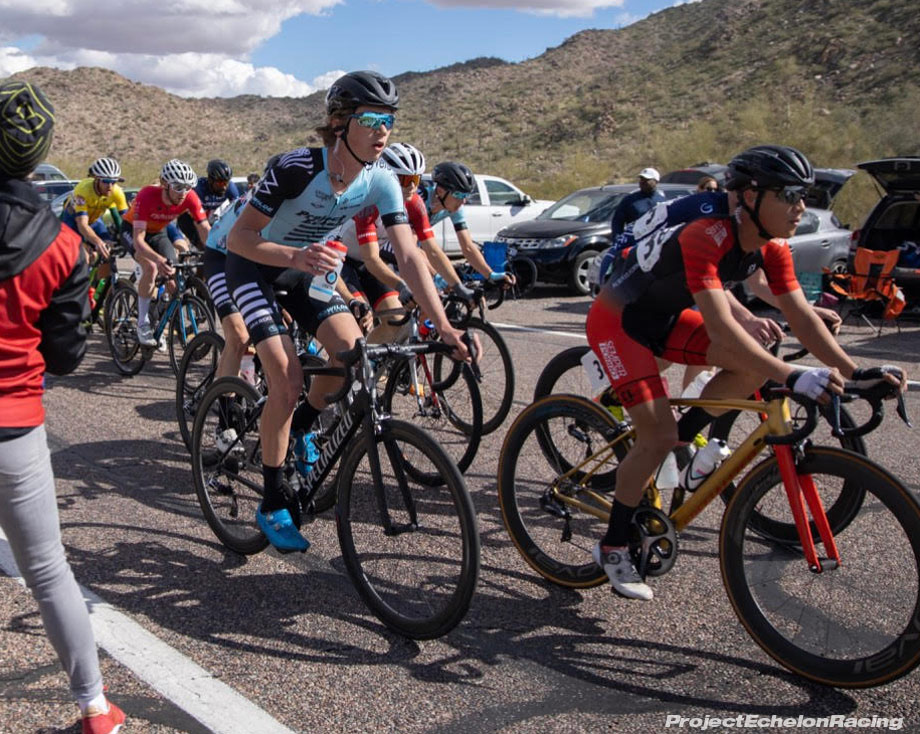 Look for Henry in the Project Echelon racing kit.

Pez:  It sounds like a good program. Tell me about your earliest memories of the race. Do you remember what it was like for you, riding TOAD for the first time?

Henry: It was definitely thrilling for sure because you're always used to be on the outside of the barriers and like watching them, like actually be on the start line with the announcers announcing your race and it was pretty crazy, especially because I was only like 13 years old, so I just felt like such a pro, so it was awesome.

Pez:In terms of racing that event over the years, you mentioned you've done this race four or five times now, so you must know this thing kind of inside out. How is it for you in terms of [inaudible 00:03:04]? Have you been on the podium? Have you, do guys look at you with uh oh, that local kid, he's got a lot of, got to watch out for him.

Henry: Yeah. It's fun because like throughout the years of TOAD is like I've moved up every single year in what category I'm racing. So this past year I was racing a mix of the pro 1, 2 and the junior 17, 18 so I was on the podium at the port Washington race for the juniors and also the Bayview Race for the juniors and the year before that, 2017, I was racing the 2, 3 category and I was only able to do a couple of days, but I got to stand on the podium at the Walker [inaudible 00:03:52]. So-

Pez:   It's always a good feeling when you're looking down on the peeps that you have just destroyed or something like that. So what about this year's race? Now you've got a new team, you're riding in a new category, you're working your way up the ranks. What are you kind of looking for in terms of competition results? What do you think you can do this year?

Henry:   This year I'm hoping to just overall team success is the number one goal for us. So we're going to have guys coming in and out throughout the 11 days because there's some overlap with Nationals. We have rides who are capable of winning these races over and we're going to probably be setting those guys up for the win. Personally, if I ever have the opportunity in the race, I'm definitely going to go for it and I would love to stand on the top step in the pro field. But that's a big goal for sure. 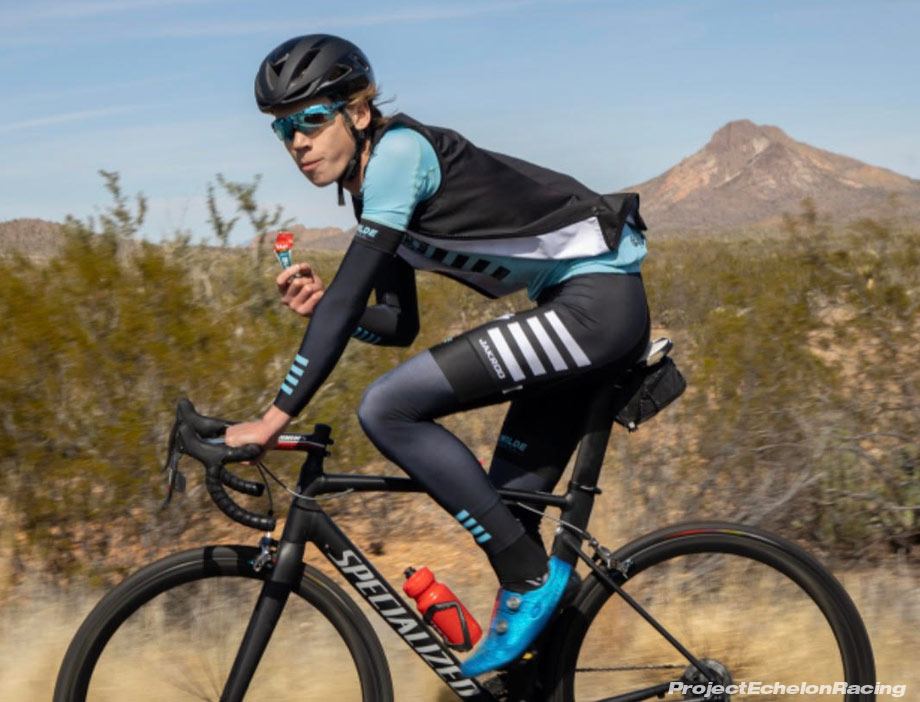 Pez:    Well that's going to be some good racing. So what about the stages? There's, you know, TOAD's got 11 stages. Riders can either race all of these stages or pick and choose, kind of do a dropping kind of deal, which makes the availability and accessibility for riders pretty easy because you can come in for the weekend if you want. Are you going to be doing, how many of those stages are you going to be racing?

Henry:    This year I'm going to be racing, I think the final five, because I have Under 23 Nationals is during the first five or first six of the days, so I'll be coming straight back from Maryland and racing TOAD right away.

Pez:     So you should have some hot legs as what we're thinking when you get back in there. What about those five stages? What do you see that looks good for you on paper or in experience? Have you got a favorite stage in there that you're really looking forward to?

Henry:  I'm always excited about the TOAD's race because that race is always something special. I mean like all my friends and family show up to that one. So that one's, the course doesn't suit me too well, but the energy and like having all those people there cheering for me definitely helps me do better. So I'm always looking forward to that day. But yeah, otherwise all those final five days are pretty fun. The crowds are big, so it's good days to be racing, for sure. 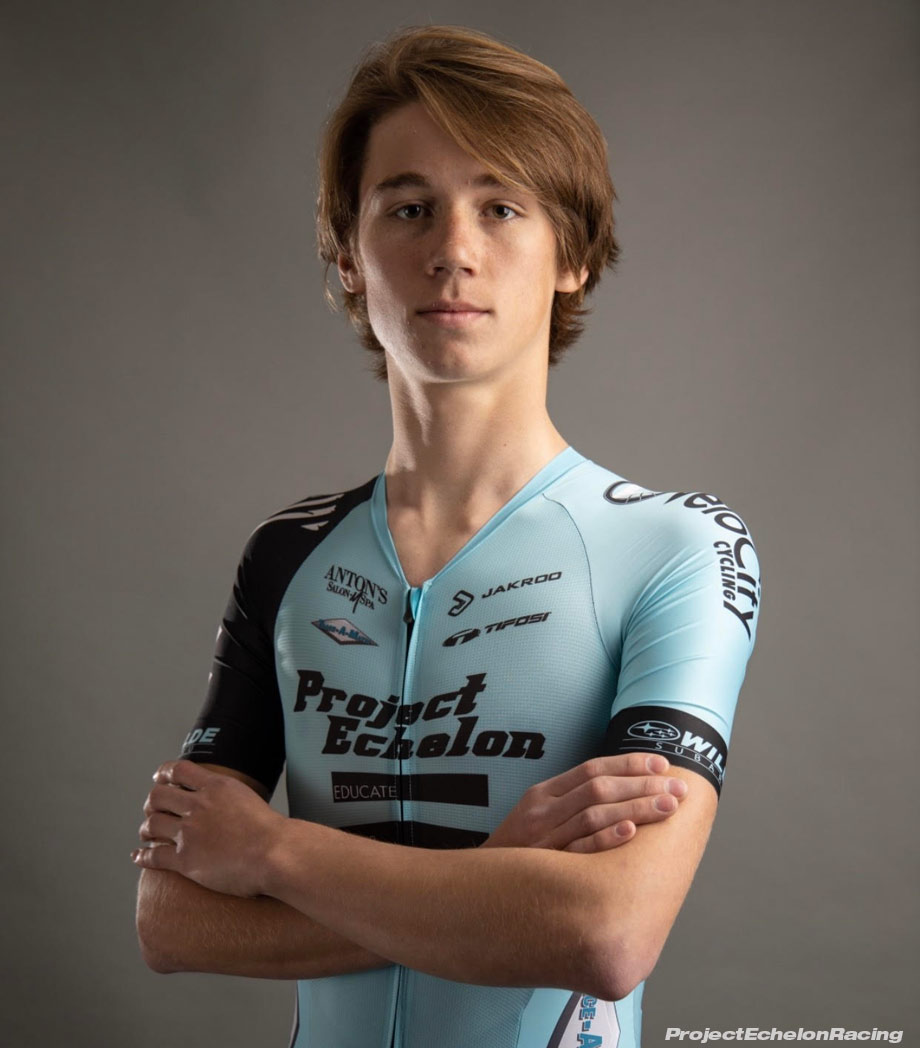 Pez:  That's cool. Okay. What about, you've got this experience of racing a TOAD, you know what this race is like. You know what makes it cool. What stands out for you about this raise? What makes TOAD such a great event?

Henry:   I think for racers is the community because it's really like a lot of people are they use the host housing that TOAD does and it's really easy for teams to come in and have a place to stay. And then the races are also close together that you're never going to have to drive more than an hour depending on where you're staying, usually to get to most of the races, so it's really convenient for a lot of people. And then for me it's just, it's my hometown race. I've known about it before I even started racing bikes.

Pez:    You must get a few fans coming out to this thing to cheer you on, being a local man.

Henry:For sure. The last year I raced the East Tosa Grand Prix in the pros and they gave me a little local call up .

Pez:    Any banners? Are we going to see some Henry Lutz banners out there maybe?

Henry:  I don't know about that.

Pez:  Your official fan club. Okay, well maybe that somebody can get that started and they can say you heard it here first on Pez. Let's get this fan club started. 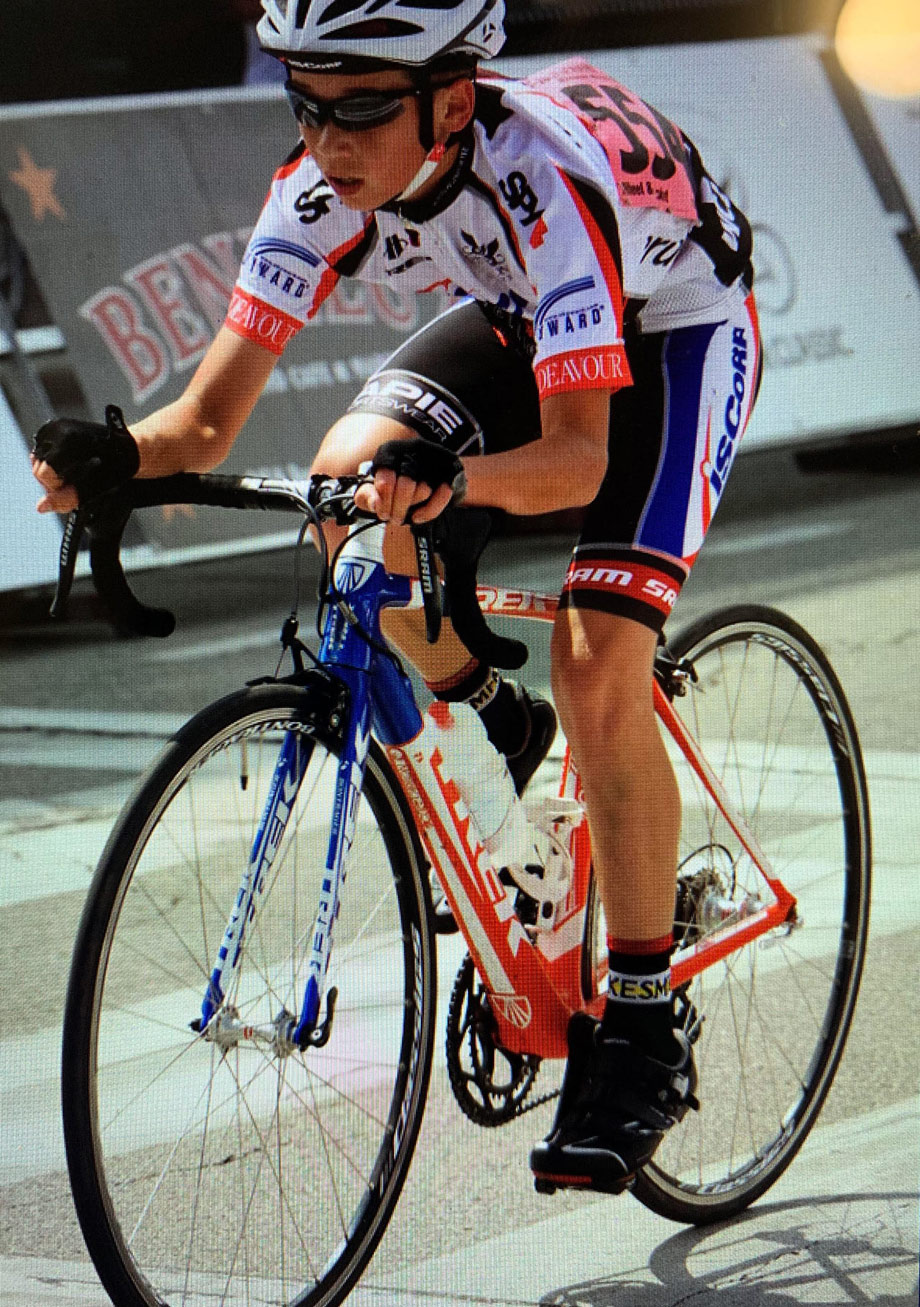 Even as a junior Henry displayed class on the bike.

Pez:  People are always talking about the Downers Avenue Stage and big crowds, big Primes, big fun. What do you know about that stage? What do you think about that one?

Henry:   Yeah, Downer's is definitely like the biggest day of the whole entire series. The crowds are huge. You know it's right in the heart of downtown Milwaukee, so you get a lot of just people passing by who will stop and watch and then they always put on the super Prime which is a crowdfunded Prime. It's upward of like $5,000 sometimes. You know it usually goes on during sunset, so it's an awesome race to watch. 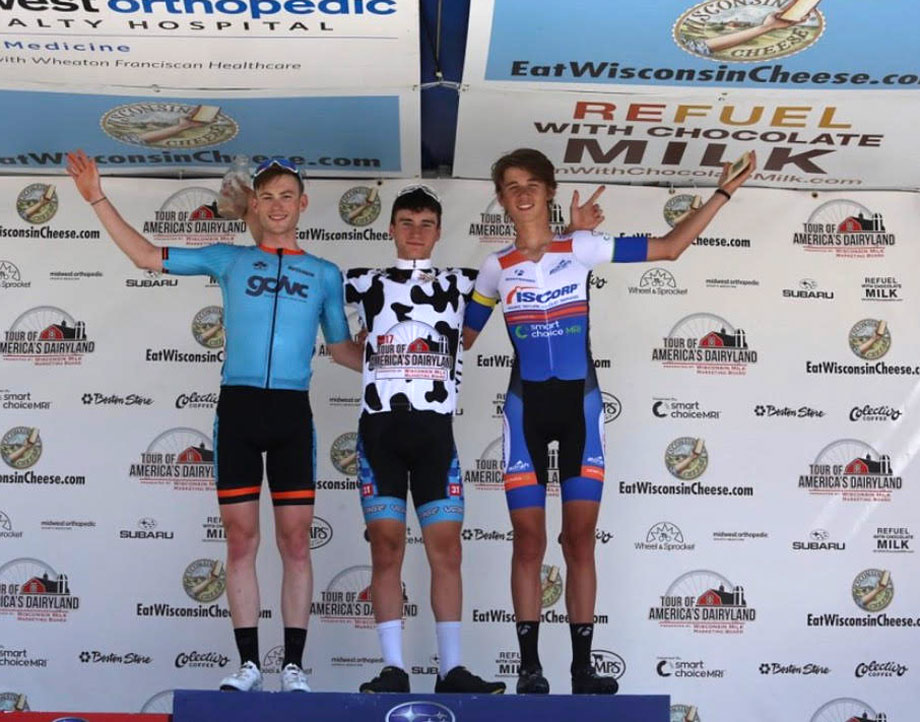 The podium at ToAD is always sweet.

Pez:   Cool, cool environment. So that sounds great. Henry, last thing I'm thinking about is what would you tell or what would you say to racers who are thinking about coming to TOAD? They haven't quite made up their mind, you know what words would you offer to people that are kind of, yeah, I want to check this thing out, but I'm not sure yet.

Henry:    I tell them that they'll probably never experience a race series anything like this because there's nothing else out there that's 11 straight days of racing. 11 straight days of credits is impossible to find. And in usually consecutive days of racing is a stage race where you have to do time trials and road races and you're fighting for the overall, but this is just a whole different thing and you're not going to experience much like it. The crowds are crazy and it's just, it's an awesome atmosphere. 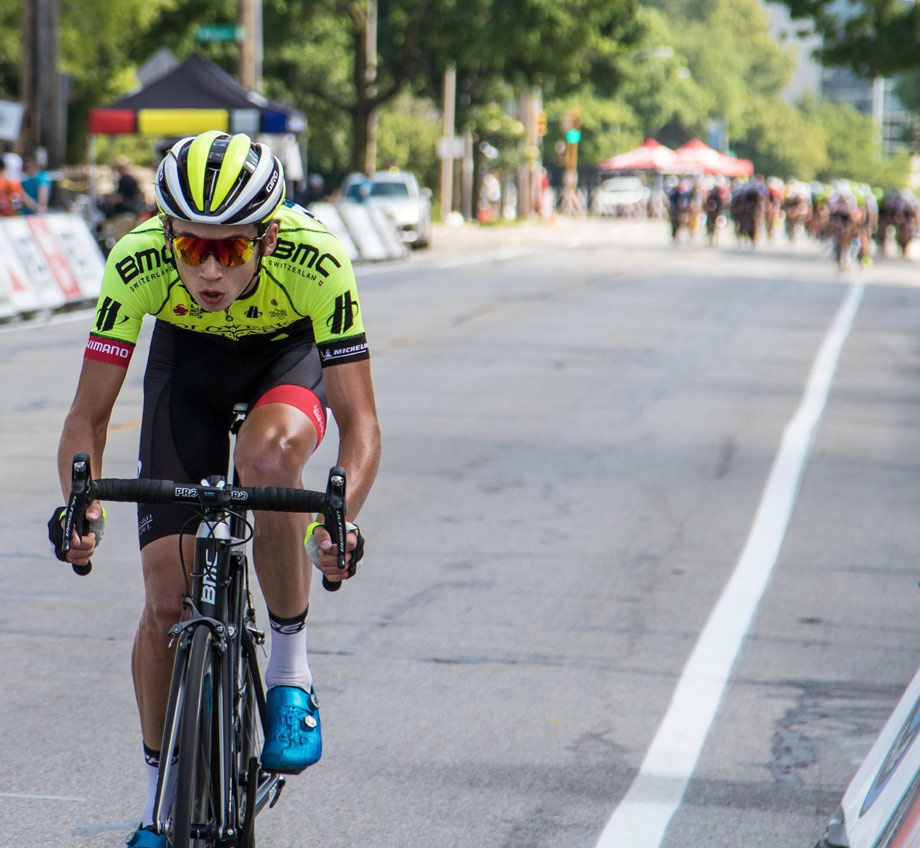 Henry off the front again at Tour of America's Dairyland.

Pez:     All right, Henry, thank you very much. Any final words before we say goodbye?

Henry:      Yeah, I just want to say that everyone should come out to TOAD if they can, watch and if you see me, say hi. Experience it for yourself and you'll definitely come back.

Pez:    Awesome. Okay. Thanks very much. Great talking to you, Henry. Good luck this year at the race.