Rider Interview: It's the depths of winter in the northern hemisphere and all the track racing is indoors, but in Tasmania the Christmas Carnival Series has been enjoying the outdoor concrete velodromes. Ed Hood caught up with one of the top riders of the series, Stephen Hall, to hear all about it. 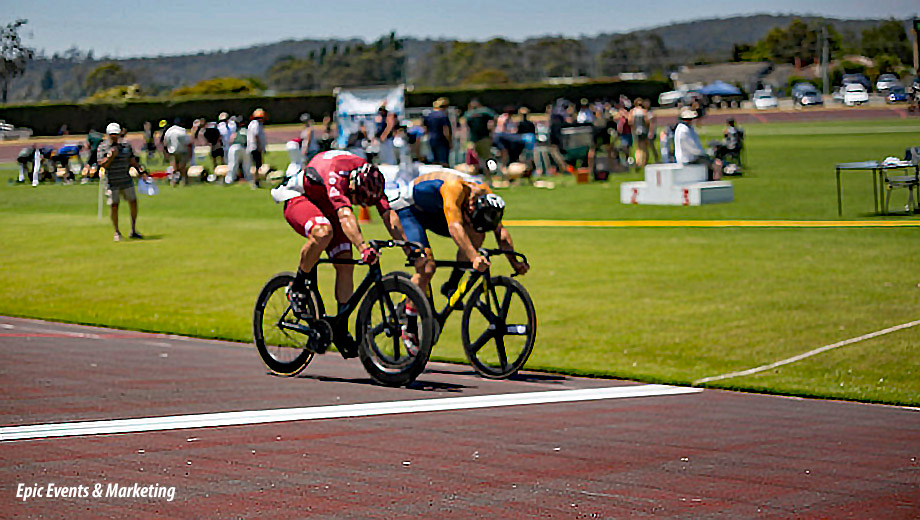 The boards may be rumbling in the big halls of Gent, Rotterdam and Bremen whilst that North European weather does its worst outside; but down in Tassie they’ve been enjoying the sunshine as they ride the famous Tasmanian Christmas Carnival series.

Aussie all-rounder, Stephen Hall has been riding them with no little success; he gave us this insight from the other side of the globe:

PEZ: What are the origins of the Tasmanian Carnivals, Stephen?
Stephen Hall: The Tasmanian Christmas Carnivals have a long decorated history, with the Latrobe Carnival the oldest running carnival, stretching over 130 editions. Spread all across the island state, they’re held on outdoor concrete velodromes which differ largely in shape, length and width. 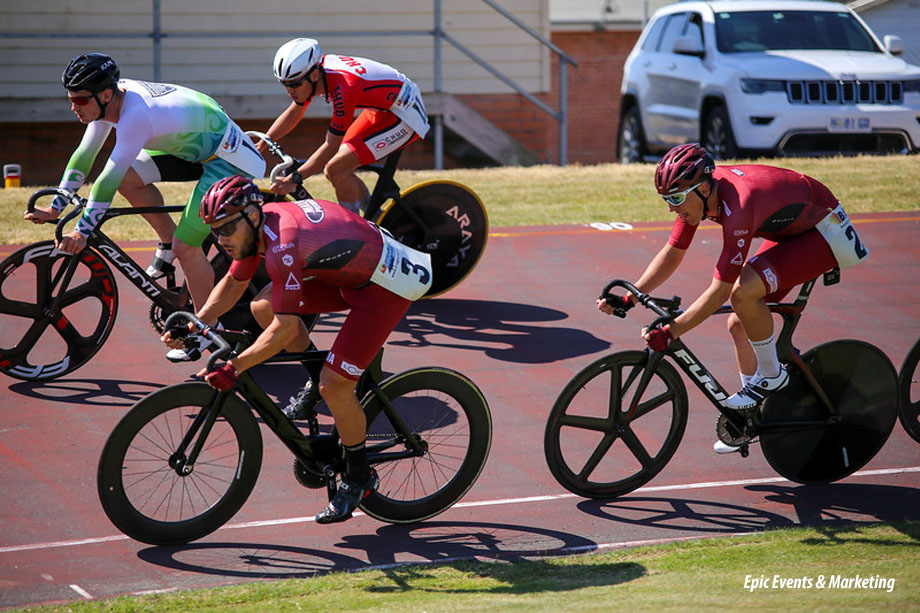 PEZ: Apart from cycling, what other sports take place?
Typically, the Tasmanian Christmas Carnivals feature track cycling around the concrete tracks, with athletics and wood chopping events held in the middle of the oval. The athletics have their own form of a handicap races (wheel races) which are known as “Gifts.” While Tasmania is also known to have produced the most world champion wood choppers in the history of the sport, considered part of their heritage from the early settlers days.

PEZ: How many carnivals are there, on which days?
The main carnival period runs from the 27th December, beginning with the 285m indoor velodrome in Launceston, followed by Latrobe, two days in Devonport, and finally Burnie on the 31st December. If you are willing to arrive in Tasmania a week earlier you can compete in the carnival held in Rosebery (21st December) and also after the main series there are a further two carnivals held in Hobart (5th) and St Helens (14th).

PEZ: Is it good prize money?
The Christmas Carnivals are renowned for great prize money, especially in the wheel races with purses of up to $10,000 AUD. 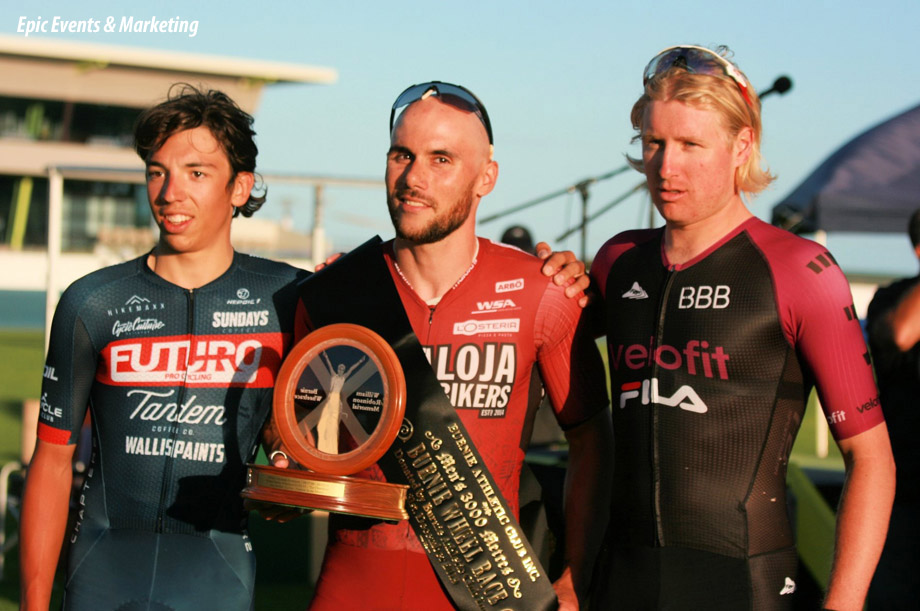 PEZ: What’s a typical cycling programme?
A normal cycling program at the carnivals will feature a 1000m handicap (qualifying heat and final), either a 2000m or 3000m wheel race (qualifying heat and final) and a scratch race. This season, sprint events returned to the carnivals after an absence for several years, with sprint, Dernys, keirins and team sprint events on offer. Combined with the athletic and wood chopping events, the entire day’s program might contain over 100 events.

PEZ: Are they all on big, old concrete bowls?
With the exception of the indoor wooden velodrome in Launceston, all the tracks are slightly banked concrete tracks around cricket ovals. They vary in length and width, (Devonport is the longest at 500m), with the most unique being Burnie, which has an uphill finishing straight adding to the already gusty ocean breeze. 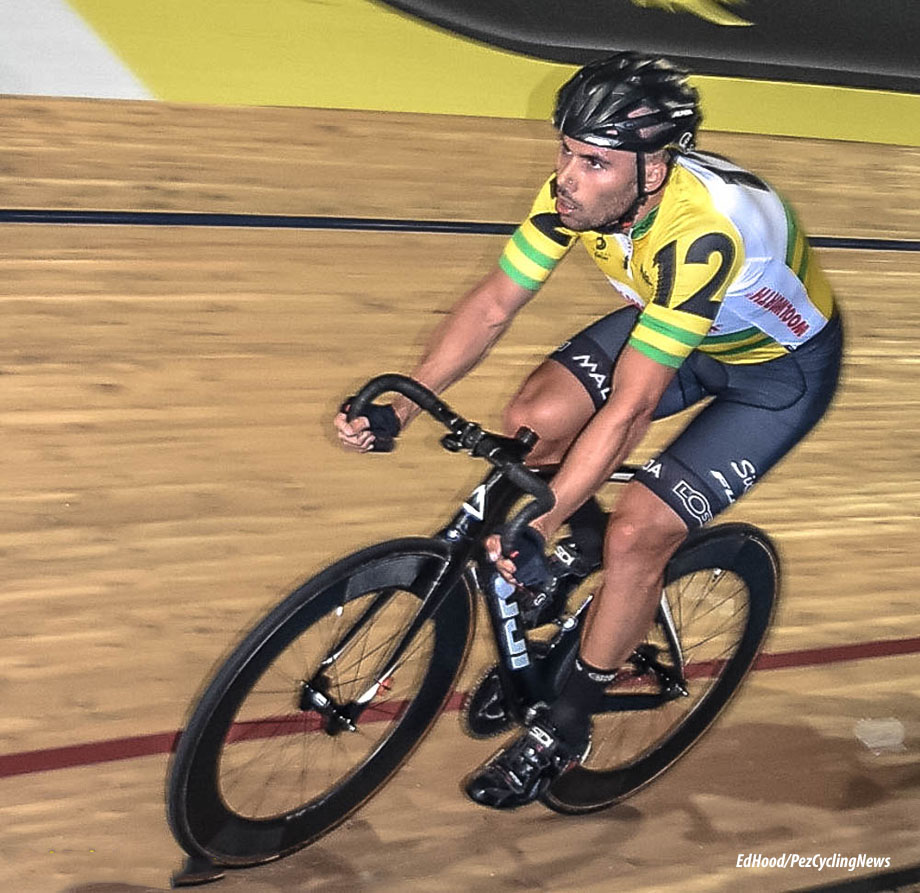 Stephen Hall on the indoor boards

PEZ: Is the bike set up different to that for an indoor velodrome - tyres? gearing?
Bikes are the same as what is ridden indoors. Some riders prefer not to use 5 spokes or discs if the wind really picks up as it can be a bit treacherous. Tyre choice and pressure is largely individual, but it wouldn’t be uncommon to see less PSI and a more resilient tubular to withstand the concrete surfaces. Generally, a smaller gear will be used than indoor but in the evening session if the wind dies down the tracks can be exceptionally quick, especially Devonport.

PEZ: What’s a “Wheel Race”?
A wheel race is a handicapped track race, unique to Australia. Varying from 1000-3000m, riders will be placed around the track based on their ability. The very best riders start off a mark of zero metres (also known as Scratch) while less experienced or lower ranked riders will receive a ‘start’ of anywhere from 30m to 350m. In Australia it is considered a great honour to be called a Scratchman. Qualifying heats will be held to determine who makes the final, awarded to the first six riders across the line. As indoor velodromes are rarely longer than 250m, a maximum of 2000m wheel races will normally be held indoor as riders cannot receive a handicap longer than the length of a lap of the track. All riders are held on their marks for the beginning of the race, awaiting a command of “Riders attention”, followed by a gunshot. Previously holders were permitted to running push the riders, however that has been removed the past few seasons and instead each rider must begin the race from a standing start. 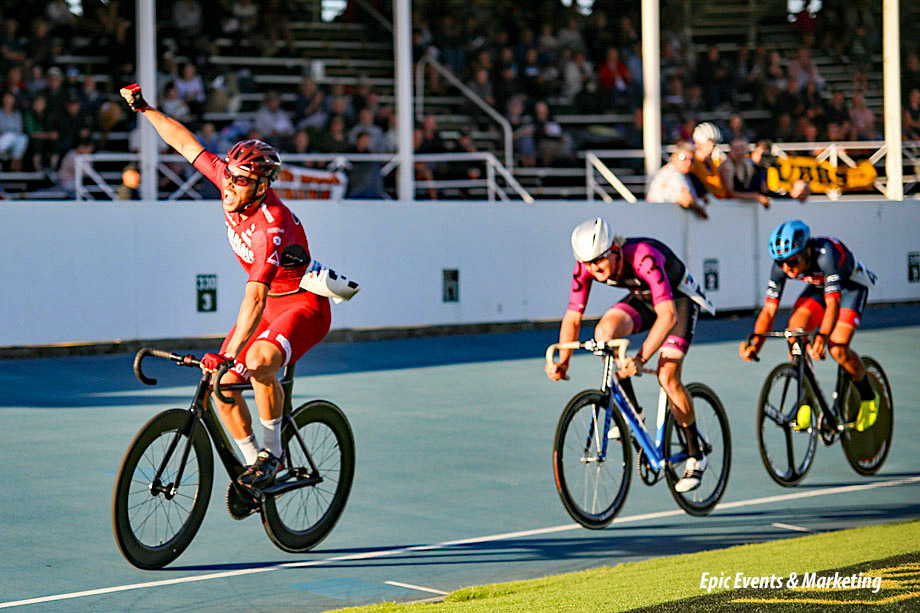 PEZ: You enjoyed a very successful carnival season, didn’t you; tell us about it please.
This season was easily my most successful of the past eight years. I won five straight Scratch Races (Rosebery, Launceston, Latrobe, Devonport and Burnie), in addition to winning the Burnie Wheelrace on New Years’ Eve and finishing second in the Latrobe Wheelrace.

PEZ: Which result gave you most satisfaction?
Definitely the Burnie Wheelrace. It is considered one of the most prestigious Wheelraces in Australia and has a great history, including my own father, Murray Hall, who won in 1981. To win off the same mark of Scratch, was a great honour.

PEZ: There must be some famous names on the rolls of honour of the races you won?
Looking through the honour roll of each carnival it really is a who’s who of cycling. Some of the most common cycling household names from yesteryear and current stars include Danny Clarke, Stephen Pate, Glenn O’Shea, Sam Welsford. . . 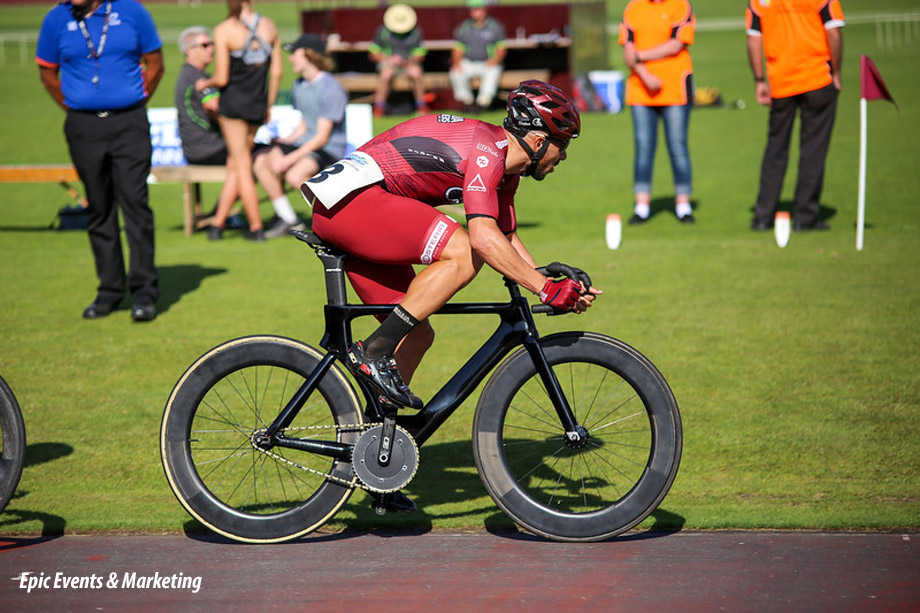 PEZ: Does your dad’s name appear anywhere?
My father had a great career racing in the carnivals and in Tasmania in general. The most well-known would be his victory in the 1981 Burnie Wheel (Scratch), his victory photograph hangs on the wall of honour in the Burnie Club Rooms. He also had two victories in the Launceston Six Day, 1979 and 1980, partnered with Dave Sanders, a Tour of Tasmania title and the classic Launceston to Hobart. No wonder he loved Tassie.

PEZ: What do you put your good form down to?
I know what is required to perform well at the carnivals. It’s my favourite week racing of the entire year so I like to put the work in and arrive in good form. The standing start and short races is what most of the international riders struggle with, as it is particularly foreign to endurance track cyclists – Europeans especially. I spent considerable time in the gym and on my sprint to ensure I could get off the mark quickly in the wheel races and also have the finishing speed to cross the line first. We ride big gears in Australia, you have to have the strength to push it or you’ll be left behind. 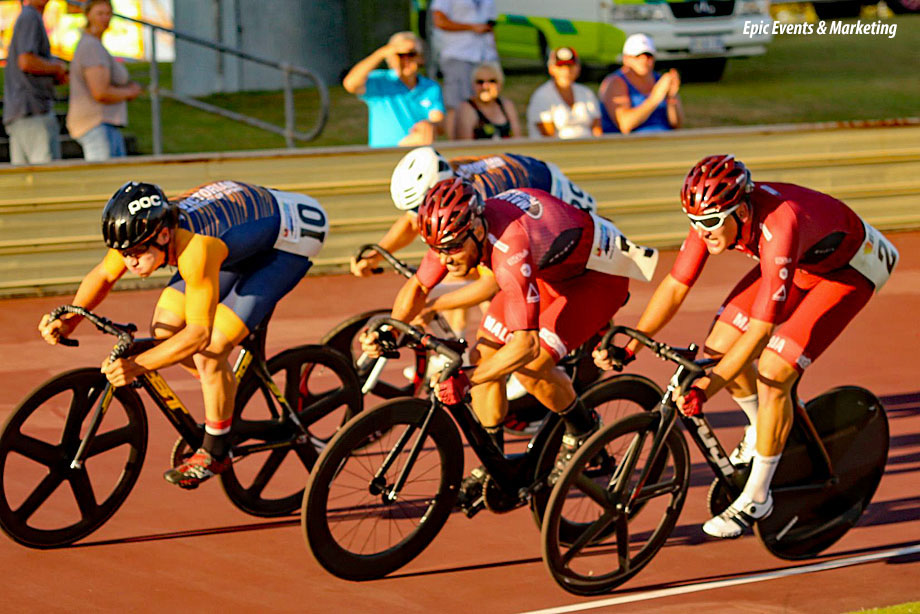 PEZ: What’s next for you?
I have a short break back home in Perth, Western Australia before I head to Europe to race the Berlin Six Day and a few other track events in my final preparations for the Australian Track Championships held late March in Brisbane.

# And there’s always at least one beer tent at a Tassie Carnival – with thanks to Stephen for his insights. #

You can see more of Stephen on his Instagram HERE. 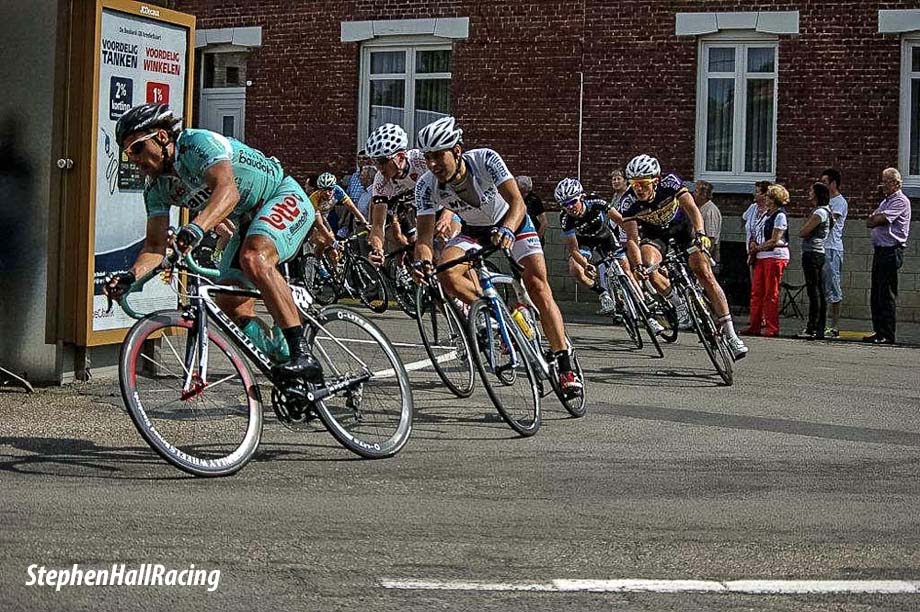 Hall on the road