Race Report: Final week and the big guns were ready to sound but after a superfast stage the only one to fire was the Green Bullet as Alejandro Valverde took his first Giro stage win. Steven Kruijswijk had been forecast to lose time to the favorites but it turned out to be the other way around as he put time into everyone else. Big loser of the day was Nibali but Chaves and Majka suffered too.

They’ve had all the rest they’re gonna get…we’re into the last week of the Giro, the third and final rest day is behind them and now there’s no rest until Turin. By this time Grand Tours are either sewn up or about to blast apart. The big names can no longer hide in the peloton only coming out to show us flashes of brilliance. 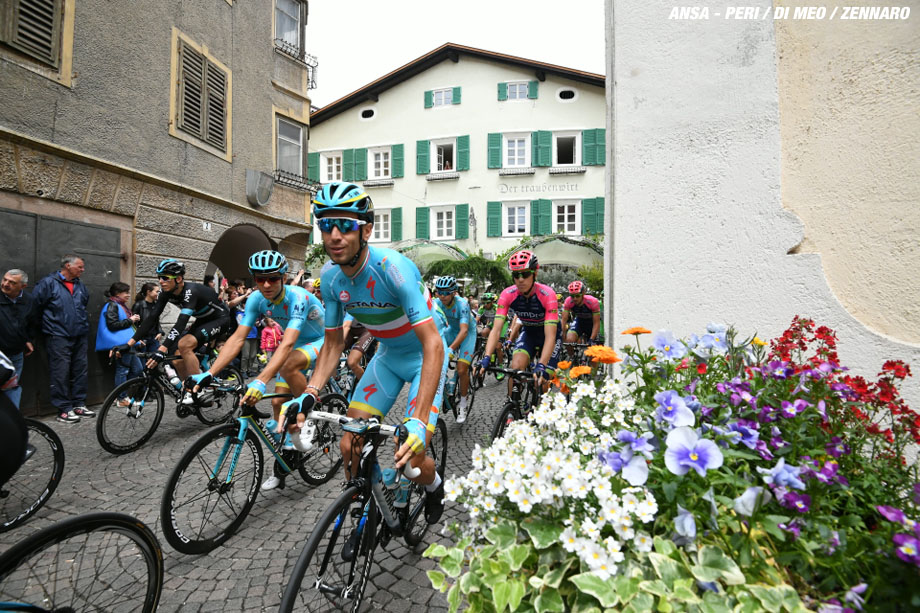 No flowers at the end of the day for Nibali

On paper, Giro’16 falls into the latter group…there are some huge time splits over the top ten but all of the main men are queuing up behind the leader Steven Kruijswijk (LottoNl-Jumbo) ready to assume the mantle of Maglia Rosa. Esteban Chaves (Orica-GreenEDGE) appears to be in pole position but the Shark of Medina, Vincenzo Nibali (Astana), is waiting to pounce. 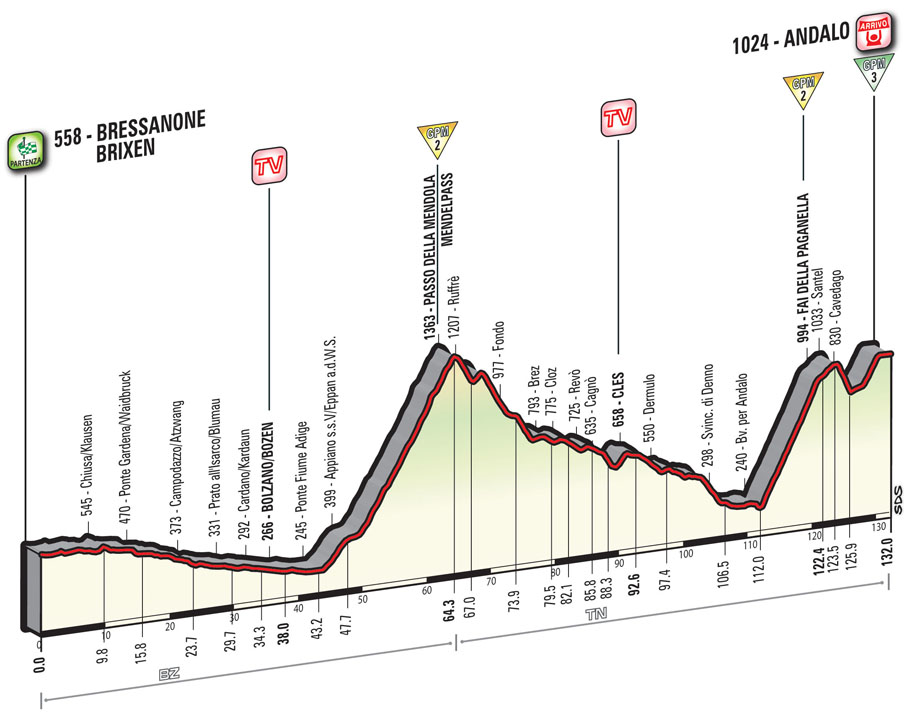 It was a short stage today from Bressanone Brixen to Andalo, just 132km and the second shortest of this year’s race, but it included two major climbs and a third kicker that, in the race manual didn’t look too severe but they all had sharp sections of very steep gradient…and the Passo della Mendola, at 15km long, was always going to be tough. 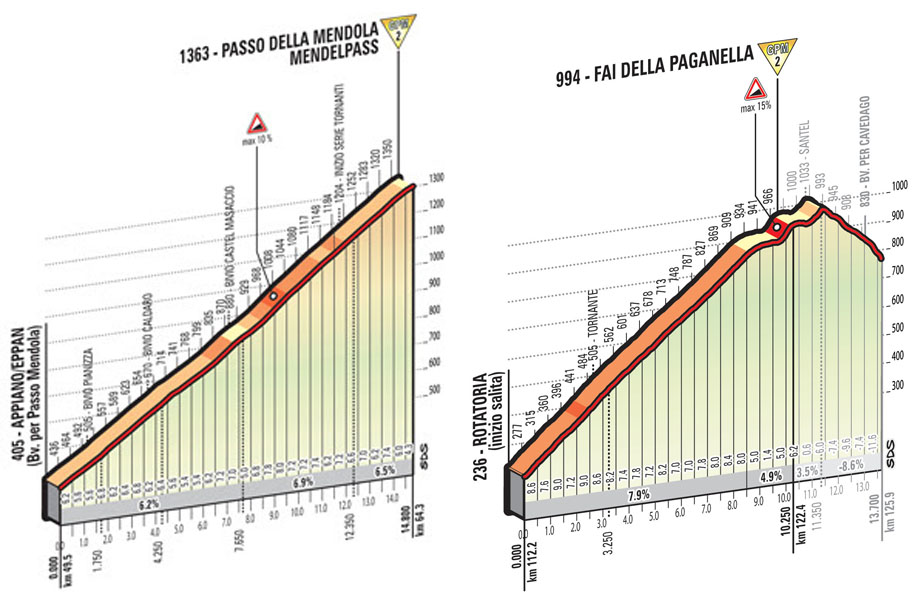 Keen to Get Going
As the riders rolled out of Bressanone Brixen they were keen to get on with it and the pace was high. Riders were trying to get in the break and eventually one formed but it only ever got 30 seconds with the peloton not letting anyone get away.

All together and they were coming onto the first climb, the Mendola, and up front Igor Anton (Dimension Data) was putting in the attacks as Movistar and Astana began to mass at the front. Valverde (Movistar) and Nibali were seen to have a quick chat, perhaps sorting out their race tactics for the stage ahead.

All Hell Breaks Loose!
Rider after rider attacked only to be brought back but the result was that Kruijswijk was now down to one teammate and that was not good news for the Maglia Rosa.

Illnur Zakarin (Team Katusha), in 6th overall, attacked and was soon joined by Tanel Kangert (Astana). David Lopez (Team Sky), Damiano Cunego (Nippo-Vini Fantini), Valverde and Diego Ulissi (Lampre-Merida) were all having a go. Just about everyone was giving a dig apart from Chaves, but eventually we had a group of five off the front with several chasers trying to get across. Joe Dombrowski (Cannondale) bridged the gap and then there were six with the peloton at 40 seconds…but it was not a settled race with attacks and digs off the front of the main group.

And what a dig as Nibali came from the back and caught most of the others off guard. Kruijswijk was forced to chase taking Valverde with him and they had a gap over the Chaves group behind. Up front Lopez was first over the summit with Sergey Firsanov (Gazprom-RusVelo) just behind. Could the Nibali group join them on the descent and push their advantage over Chaves and Rafal Majka (Tinkoff)?

So with the shakeout on the downhill we now had six in front with the Nibali group trying to catch them. The six were Bob Jungels (Etixx - Quick-Step), Tanel Kangert (Astana), Lopez, Ulissi , Dombrowski and Firsanov

And catch them they did with Nibali, Zakarin, Valverde and Kruijswijk keen to push their advantage over Chaves, Andrey Amador (Movistar) and Majka, 30 seconds behind. With pretty much a full-on descent to the second climb it was always going to be a quick day. 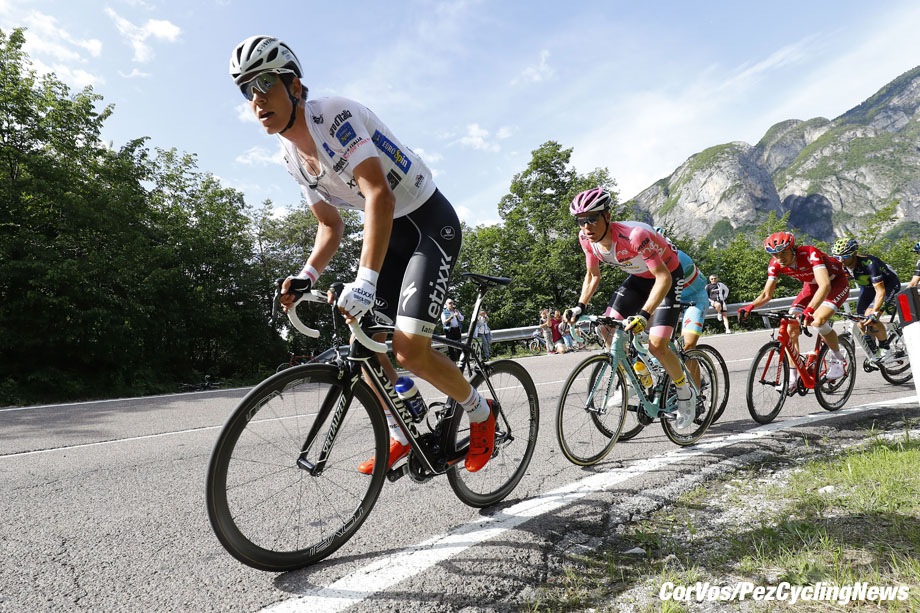 Bob Jungels bounced back to move up on the overall

Good Day, Bad Day, Rest Day Blues
Now it was obvious what Nibali and Valverde were up to. Although they still had Kruijswijk with them, their target today was to put Chaves into trouble and claw back some of the 1:30 that Chaves had put into Nibali in the time trial. They had seen that Chaves had not been responding to any of the attacks on the climb and had lost ground over the top so they were putting the hammer down to come back to the top of the GC. Coming out of the rest day often does strange things to the legs and it was the Orica rider who was suffering.

Everyone in the front group was contributing including Kruijswijk who was benefitting from the move. Nibali also had a trump card being the only man to have a teammate with him.

With bonus seconds on offer at the second sprint both Nibali and Valverde were keen to get involved but maximum points went to Ulissi with the Astana and Movistar riders picking up the rest. The Chaves group was holding at around 30 seconds although it was 10 seconds up, 10 seconds down as the gradient changed but they weren’t really getting any time back as the leaders started the climb of Fai della Paganella.

Cannondale riders were lining up with Chaves but with Dombrowski up front they were playing the stage game rather than the overall for Rigoberto Uran…or were they? Up front, Dombrowski was losing contact with the Valverde group so either he was cooked or he’d been ordered back to help Uran. Tough deal for the young American if it was the latter. And judging from the swear words being shouted into the radio it was in fact the team position they were playing.

Recovery?
Onto the climb and it was uphill all the way now. Chaves came to the front of his group after hanging back for most of it and he had Majka, Domenico Pozzovivo (AG2R-La Mondiale) and Uran along too. It was now or never and Chaves was closing the gap. Up front Kangert, job done, was dropping back and radioing ahead that Chaves was moving forward.

After patting just about everyone on the back, Kruijswijk responded to the attack of Lopez and Zakarin and went away from Nibali and Valverde. Uran dropped away from the Chaves group and there will be harsh words in the Cannondale hotel tonight…young Dombrowski will not be happy!

And now that wily combatant Valverde launched his move, attacking with Kruijswijk on his wheel, ever-watchful. Zakarin made the join but Nibali was struggling, looking to Firsanov, Lopez and Jungels for help but not getting any. 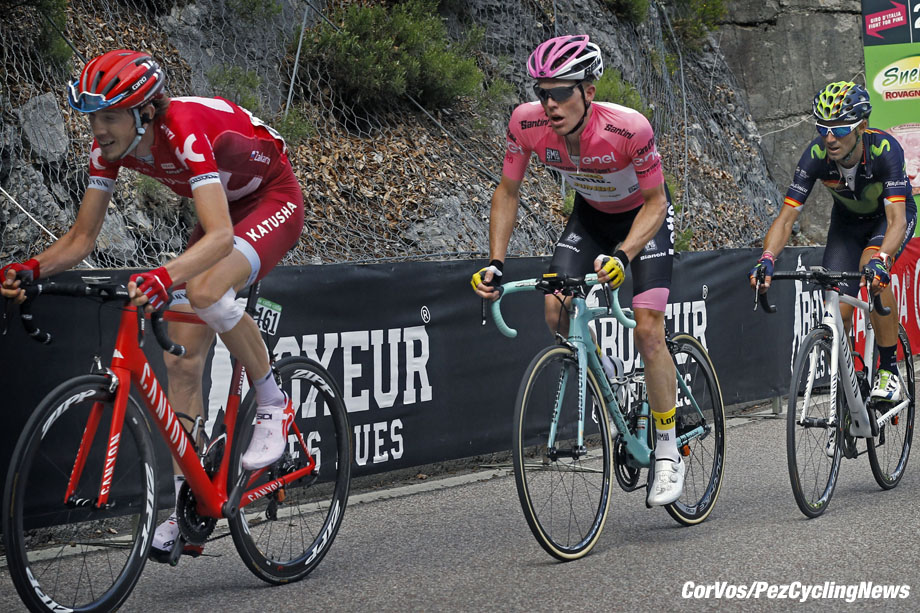 The winning move with Zakarin, Kruijswijk and Valverde, but no Nibali

Ciao Vincenzo!
The trio was pushing away from the four behind…and the Chaves group was coming up steadily from behind. That could help Nibali or see him lose more ground.

Valverde was looking for a stage win in his Giro debut and to make inroads on the GC; Zakarin was looking to move into the top five and Kruijswijk was looking to protect his lead overall for at least another day. The speed had been super high all day and they were running 10 mins ahead of the fastest schedule…just 13km to run as the Chaves group made it up to Nibali.

Coming to the last, and steepest, section of the climb first Nibali and then Chaves injected some pace in a bid to draw the leaders back. Kruijswijk was riding like a man possessed and the gap stretched once again but Chaves and Majka were giving it a go behind as Nibali went backwards.

And now Nibali was passed by an ailing Pozzovivo and losing contact. With a 3km slight descent before the final kick-up he could get back on but the race was in full flight and both Italians were suffering.

Agreement!
Chaves and Majka had a quick chat and it looked as if they were agreeing to work together but the trio at the front was shifting. Kruijswijk had taken the climb and he and Valverde were hammering the downhill to keep the gap that was now at 30 seconds.

Third place overall at the start of the day Nibali was now with Pozzovivo 11 seconds behind the Chaves group…and going backwards.

Thinking of the Stage Win
The leaders were just getting on the very steep section 3km from the finish and beginning to think of the win. Race leader Kruijswijk wanted a stage win to go with his pink jersey but he would have to beat Valverde who always knows how to finish at the top of a climb.

Chaves was pushing hard behind putting Majka into difficulty while Nibali’s race was lost. Chaves couldn’t put any time into the lead trio and the winner was going to come from the front.

Final K!
Zakarin was doing everything to pull the time out while they other two were looking at each other.

Kruijswijk opened up the challenge but the Spaniard had no trouble coming round him and holding him off to the line and obviously enjoying his first Giro stage win so late in his career. Zakarin came home just seconds later but it was 41 seconds behind before Chaves crossed the line, with Nibali another 1:04 further back. 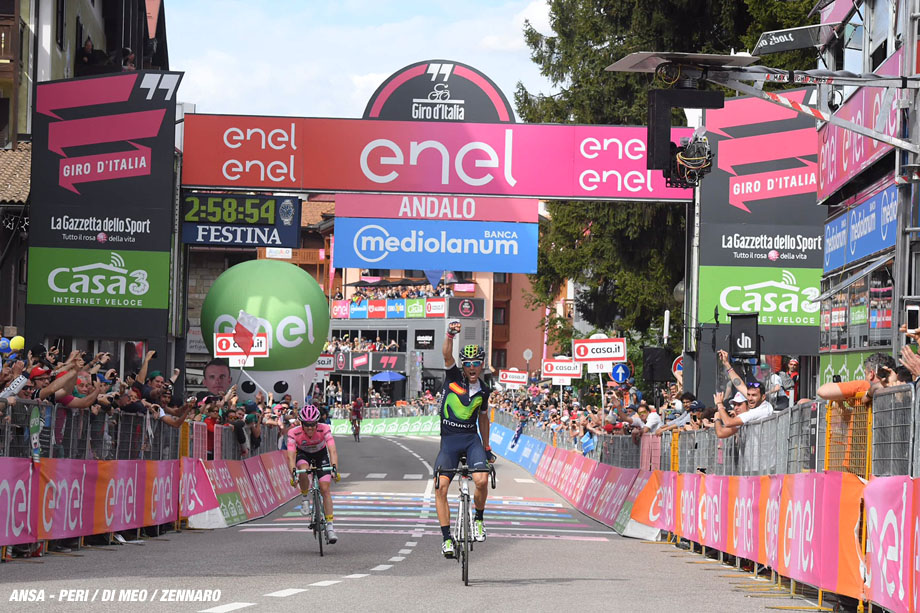 The first Giro win for Valverde and third overall

The day belonged to two men, but let’s not forget Zakarin too. Alejandro Valverde took a very clever win and the young Dutchman not only retained his pink jersey but put time into almost all the men who had thought it would work out the other way around.

One day closer to Turin but there’s still everything to ride for. Can Kruijswijk make the Giro just as popular in Holland as the Tour will be come July? We’ll see this week and Pez will be there to bring you all the action.

Keep tuned to PEZ for Ed Hood's day on the Giro d'Italia and catch up with ALL PEZ Giro news here.