Film Review: For many fans, pro bike racing begins and ends at the finish line as the stars duke it out but a bike race is in fact many races. A superb documentary by Lithuanian filmmaker Arūnas Matelis, filmed in Italy over several years, takes into Deep Cycling and the world of the gregario. 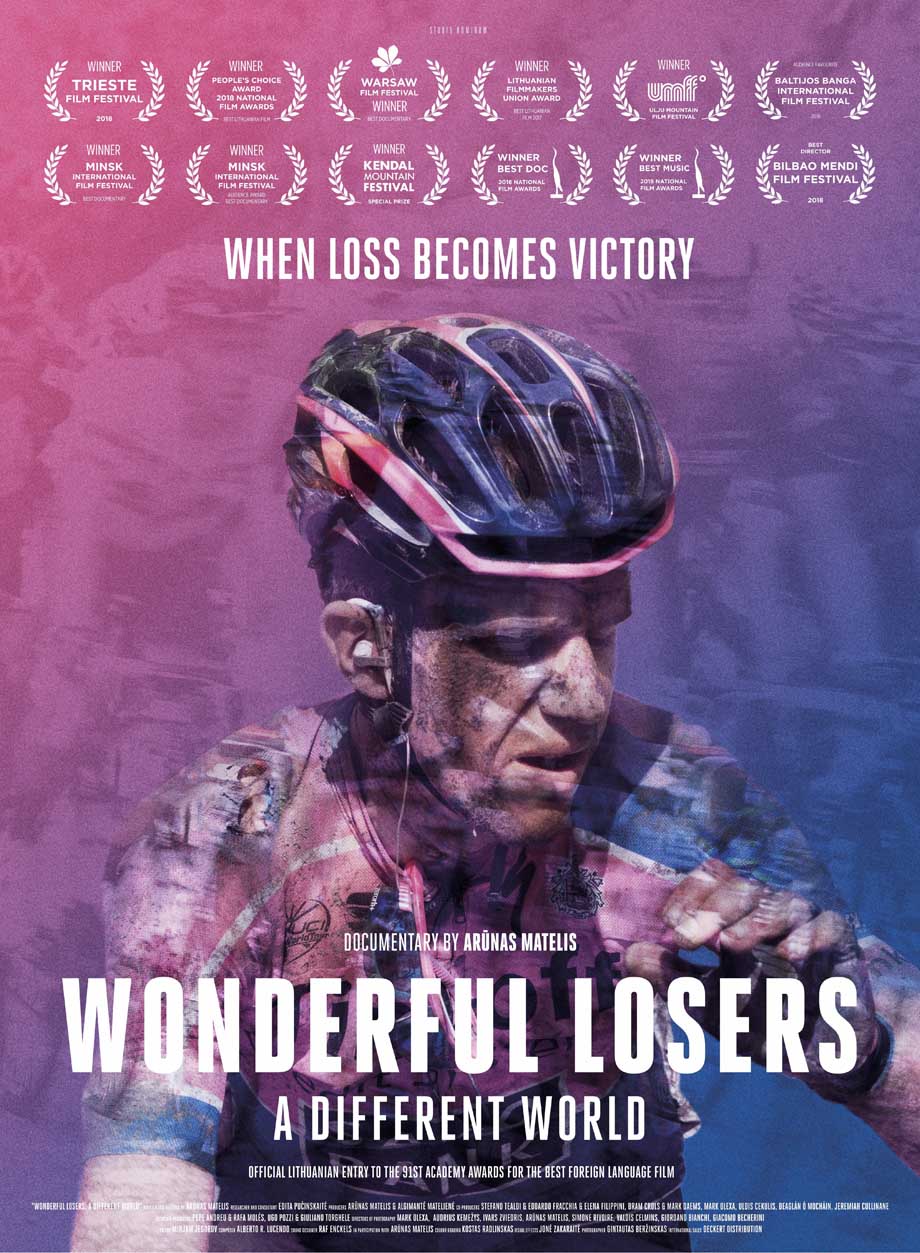 “Wonderful Losers” begins with the medical team at the Giro d'Italia, chasing after the peloton and treating the wounded in the chaotic atmosphere of a Grand Tour. The film then switches to Svein Tuft, alone in the mountains, communing with nature and sitting in a stream surrounded by ice and snow after some barefoot rock-climbing. Tuft is an example of the pure gregario, or domestique, and in a world in which winning counts for all he is able to explain precisely what his role is and that the team's success is his own.


WONDERFUL LOSERS: A DIFFERENT WORLD from Studio Nominum on Vimeo.

This is not a movie about finish line glory. It is about the trials and tribulations of those who help the stars, the riders who are good enough to be professionals at the top level but will never win a race. Their sacrifices can be extreme but as Tuft remarks that even after a crash you keep going because not doing so is like turning your back on your teammates. 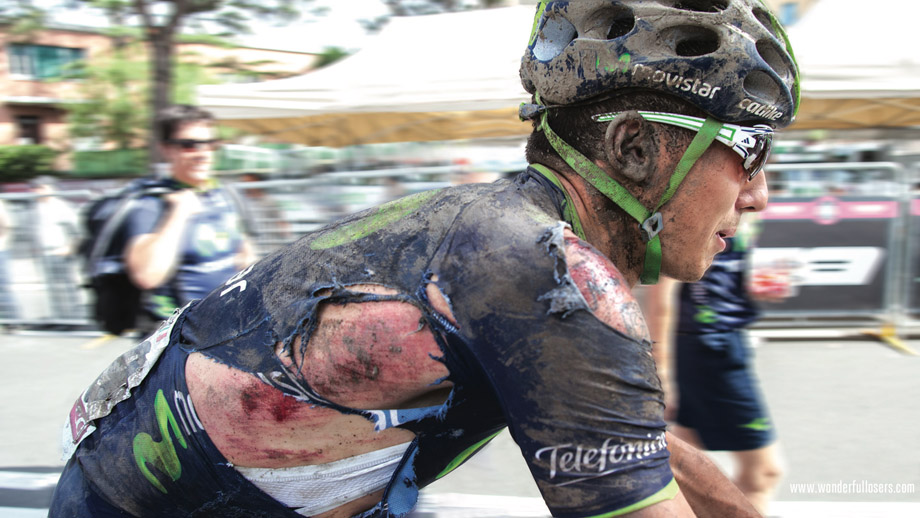 There are a lot of sequences of smashed-up riders getting medical attention, both on the road while hanging on to the medical car, or in the hospital. These are tough people. When told that he had three fractured vertebrae and might not be able to ride again, one of the riders thought “Let's see what these doctors know!” and was back on the bike seven months later. 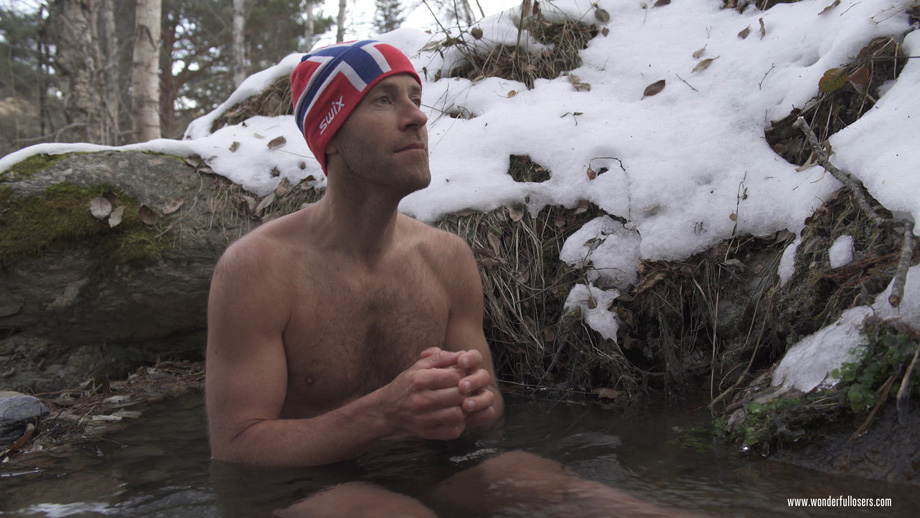 Watching the gregarios at work, which is seldom shown on sports broadcasts, is interesting. One watercarrier works his way up the peloton, handing out bottles as he comes to each of his teammates. Another time, he advances to the front and as his teammates come past they each take a bottle as they go by. There is a great bit of footage where someone is standing by the road, concentrating with great intensity, and you realize it is a soigneur at the feed zone, ready to hand out the bags. How this all can happen without massive crashes is hard to fathom. The bags vanish in movie magic. Or racing magic. 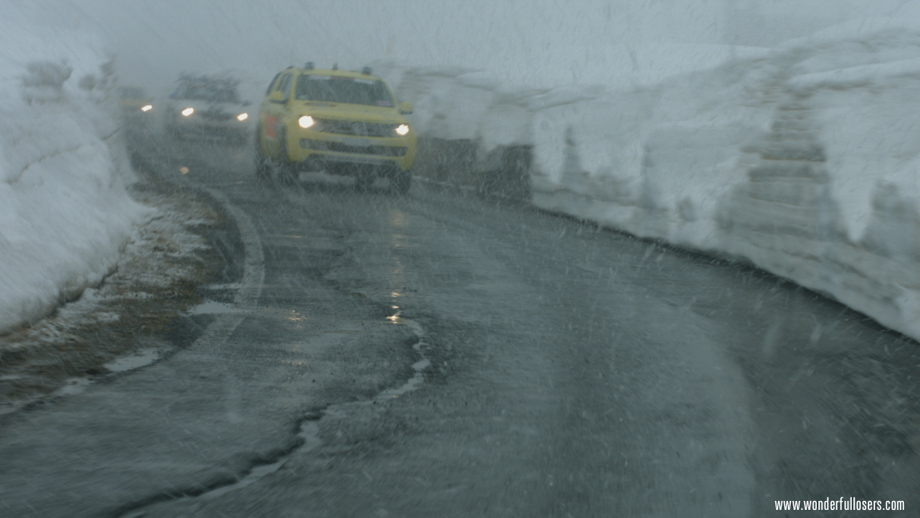 Cycling is different from so many other sports. Jos Van Emden, a Dutch rider, focuses on his uphill time trial but stops briefly for a totally unexpected personal moment that made international headlines in 2014. Daniele Colli, who was shown badly injured at the beginning of the film, gets to enjoy a lovely moment with his fan club during a later race. Daniele Colli, you might wish to be reminded, won the Italian Junior National Championships in 1999 and two amateur races in 2004 before turning professional the next year and never winning a race since. His fan club is very proud of him. 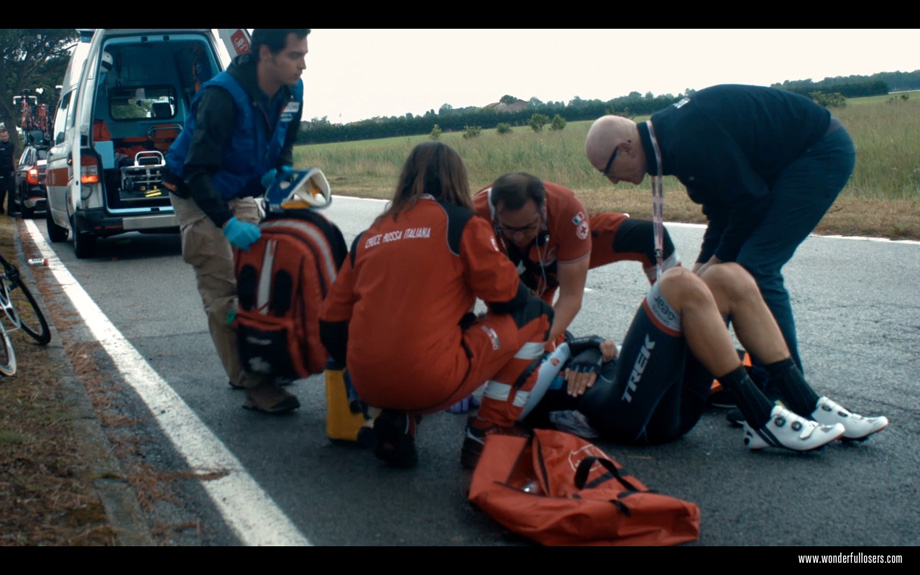 The Giro medical team impresses with its calmness and professionalism and vast amount of equipment. It needs all three of these as riders constantly are passing by with torn shorts and bruised skin and potential concussions. Some of the scenes are painful to watch and you have to wonder how it can be worth it all for the riders when it looks like a battlefield with wounded cyclists strewn all over the tarmac. A rider who has cycled since he was seven years old wonders, 30 years later, ruminates on what retirement could be like, what it would be like without the environment that surrounds him. He wants to tell people what it means to be a cyclist. 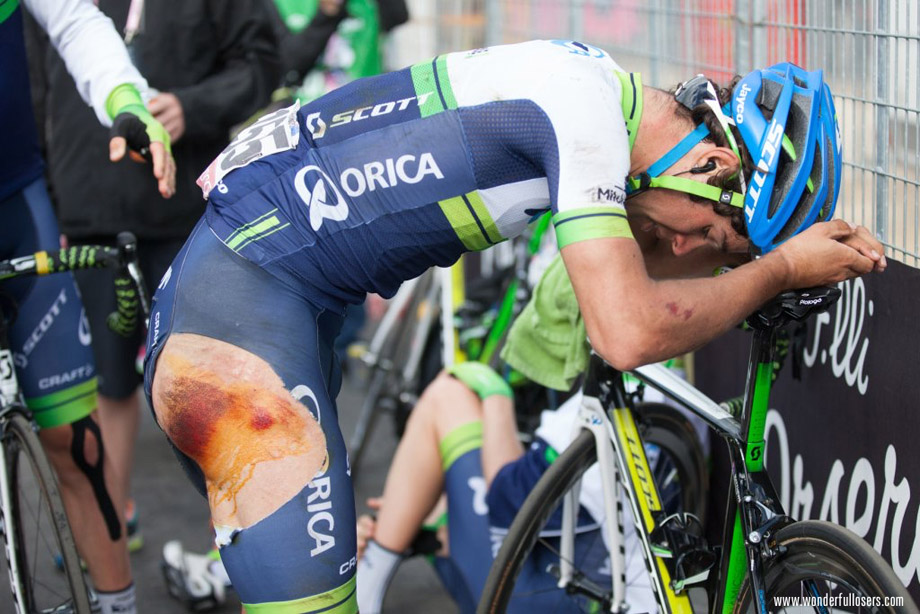 Besides being able to deal with pain, the gregario must have the right attitude. Each of them has a very specific task and even when sprinting for the finish they are aware of what their team leaders are doing. 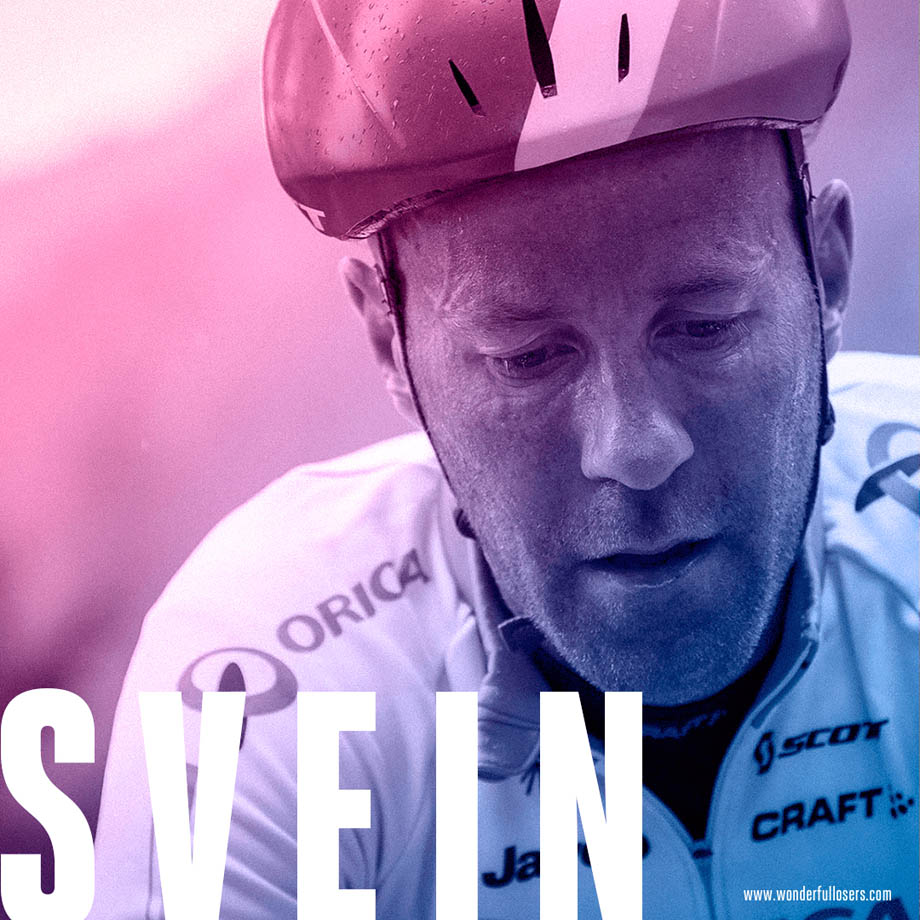 Svein Tuft comments that when people look at the start line they see 200 riders, all of whom they think are riding for victory; people ask him who he could have come last. In fact, he says, there are really only five guys who have the potential to win. It is due to the unnamed stars of “Wonderful Losers” that those leaders have those moments of glory. But “Wonderful Losers,” a sensitive and deeply thoughtful film, is not all about crashes and wounds and not winning. It is about men who are fiercely proud of their metier, who are the pillars of the pro cycling structure, and who, in spite of their modesty, do from time to time grab the brass ring crossing the finish line. 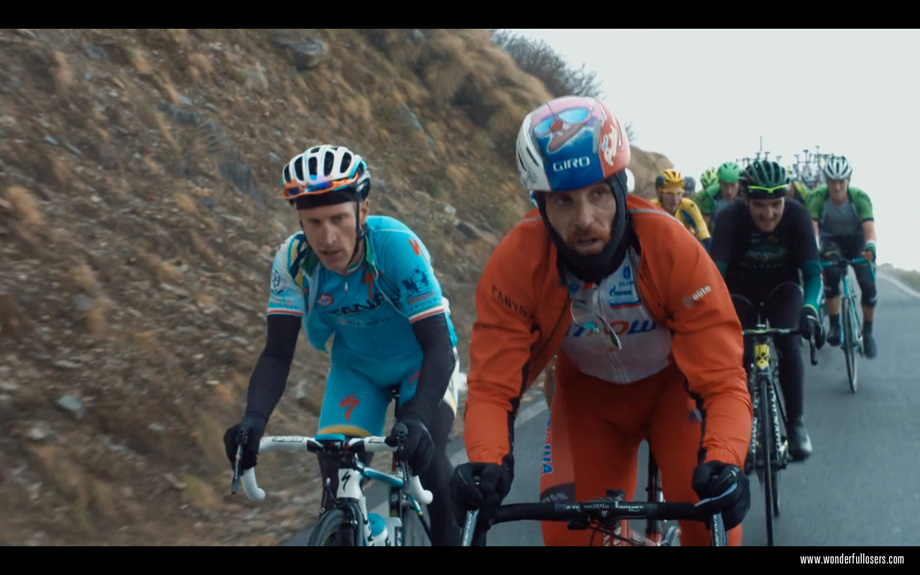 Criticisms of the film? Gregarios are the anonymous ones in a race but it would be nice if their names were subtitled on their appearance rather than listed at the end of the movie. Crashes also happen to stars and it might have been preferable to show more of the gregarios's work besides carrying water bottles (sheltering the leader, chasing down attacks, blocking pursuers) rather than emphasizing the admittedly dramatic injuries. 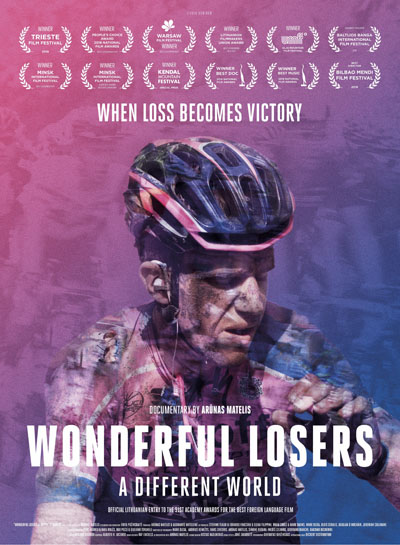 “Wonderful Losers - A Different World” is available as a video-on-demand and is the kind of award-winning poetic documentary that all cycling enthusiasts should see - even if sitting in an ice-cold stream is not your thing.

When not glad he does not feel he has to ride for five days with a broken pelvis, Leslie Reissner may be found ordering more champagne for his gregarios at www.tindonkey.com
▲ BACK TO TOP ▲
Related Stories
﻿