With gravel rides exploding all over North America, it’s good to remember that gravel is an international discipline, with great rides all over the world. Let’s explore Duke’s Weekender in Scotland happening September 7-8, 2019. 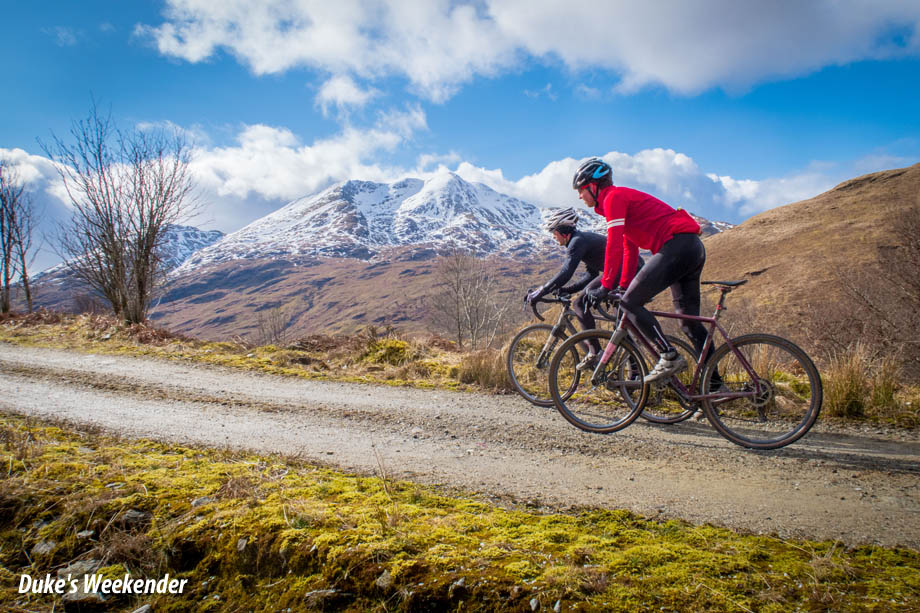 In response to our “Pez Goes Gravel Riding” series introduction, the organizers of Duke’s called me up to talk up their ride. In a bit of perfect timing, it turns out that I have a conference in the UK the week before, so let’s talk to Rob Friel, Frazer Coupland, and Stu Thomson about what I’ll be experiencing at Duke’s Weekender on September 7-8, 2019.

Duke’s Weekender The group working to put the event together are a small team of friends but we bring together a host of experience across events and the cycling industry. Rob has been racing for years across an array of disciplines (Elite Scottish XC MTB Champ; age group British kilometre and pursuit champs). He’s local to Aberfoyle, passionate about the area and has an intimate knowledge of the huge gravel trail network. Frazer is the brains and banter (if Dad jokes count as banter) behind the infamous No Fuss Events. No Fuss operate some of Scotland’s biggest cycling events including 10 Under the Ben, Tour de Ben Nevis, Scottish Enduro Series and the Scottish rounds of the WEMBO World 24h champs. Stu is a rider turned filmmaker who runs the Glasgow based advertising agency Cut Media. Cut Media specialise in Outdoor and cycling industry work and produce a host of work for brands such as Santa Cruz, Cervelo, Red Bull and Adidas. And yes, he also is the man behind the lens on many of Danny MacAskill’s biggest films such as The Ridge, Wee Day Out and Imaginate. 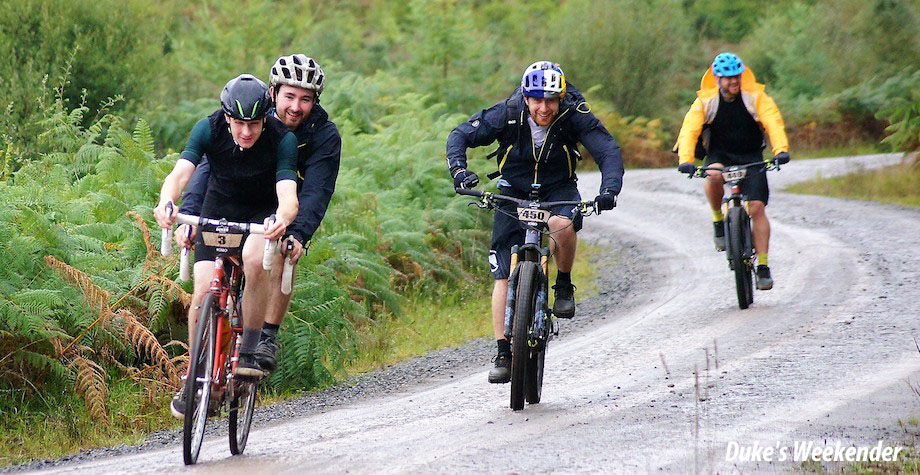 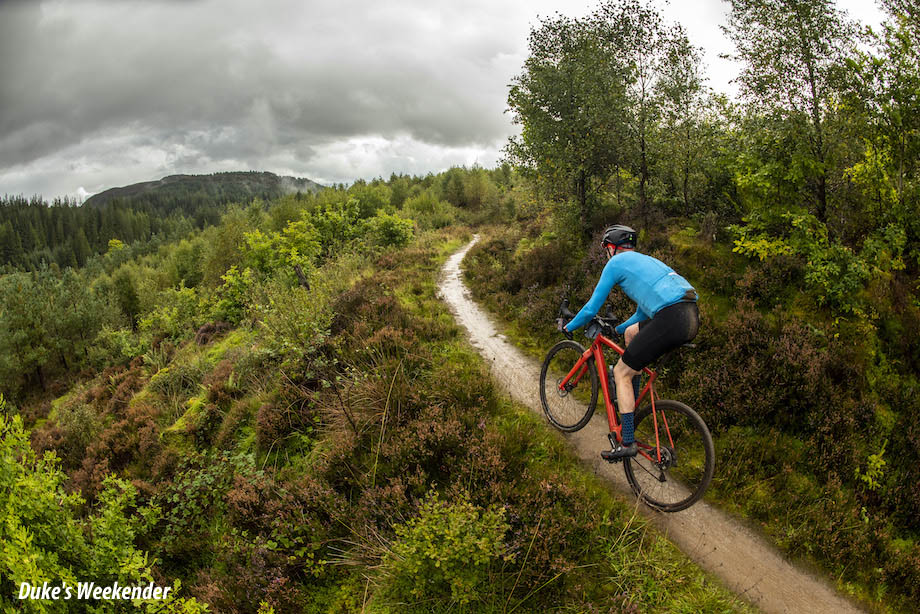 Pez: Besides it being where you live, why a gravel ride in Scotland and Aberfoyle area?

DW: The Dukes Weekender was driven by the desire to bring you all the incredible gravel and trail riding in the Loch Lomond and Trossachs National Park. Scotland is already well recognised as a world class destination for road cycling and mountain biking, and we happen to think the Queen Elizabeth Forest Park is the best place in the UK to ride a gravel bike. Miles of beautiful and exhilarating forest trails, hills, singletrack, loch side paths, open moorland tracks and scenery you’ll never forget. Despite all this Aberfoyle is not as remote as the scenery would have you believe. Just 45 minutes from Glasgow Airport, and an hour from Edinburgh the wild natural beauty is easily accessible to those who know. 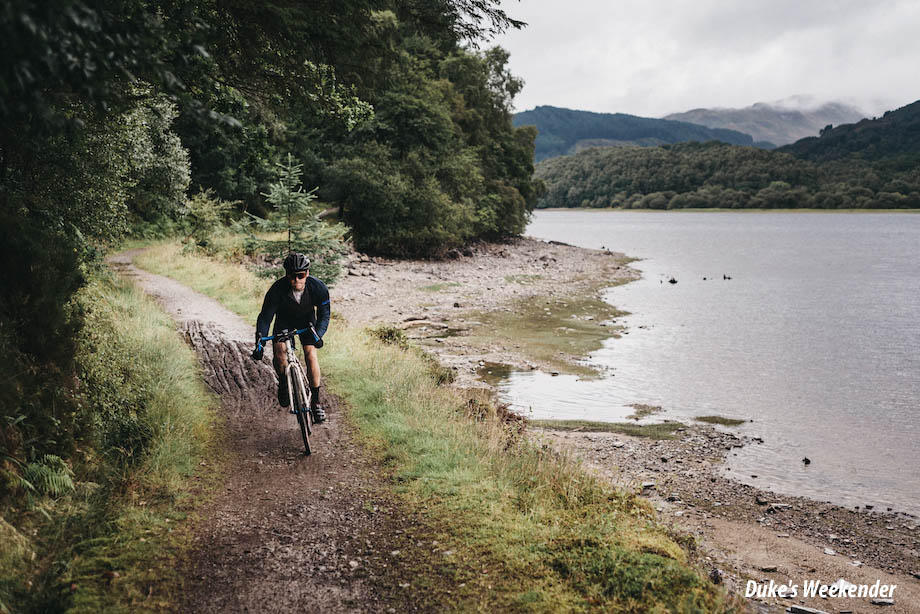 Pez: "Gravel" is a very broad term that encompasses pretty much anything off road. So what's "Duke's" gravel?

DW: The Duke’s Weekender is an event based on an Enduro format which includes several timed stages throughout the day, with beautiful transitions between stages over approximately 65 km. The majority of the lap is on hard packed well-draining forest trails. We have also included some smooth and flowy singletrack along loch sides and through the forest. These can get a bit more muddy, but nothing like a CX race. Your bike could get splashed but won’t clog up. We think you could succeed on a variety of bikes as the different advantages that a gravel bike, CX bike and XC MTB have will come into play at different times of the day. Last year’s male and female winners both happened to be XC MTB champions who opted for their drop bar bikes. 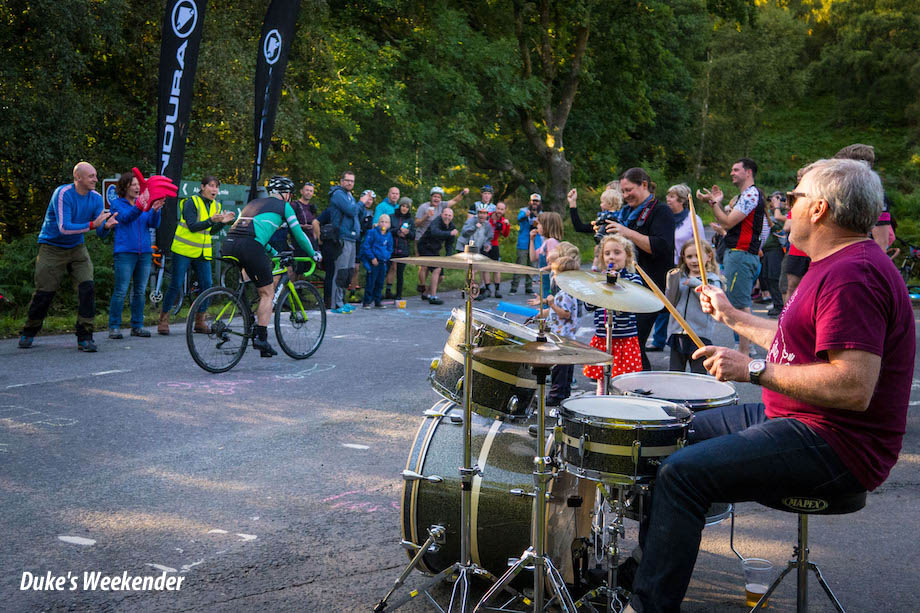 Pez: What are other events going on in the region over that week? (both cultural and other cycling events).

DW: The Dukes Weekender itself is more than just a Gravel Enduro. The main event includes a Saturday evening hill climb up the Dukes Pass complete with live music and a bar on route. There is also a Saturday morning kids enduro which includes timed gravel stages over a shorter (but equally as competitive) race. Last year we had world famous trials rider Danny MacAskill starting Stage 1 and signing autographs. 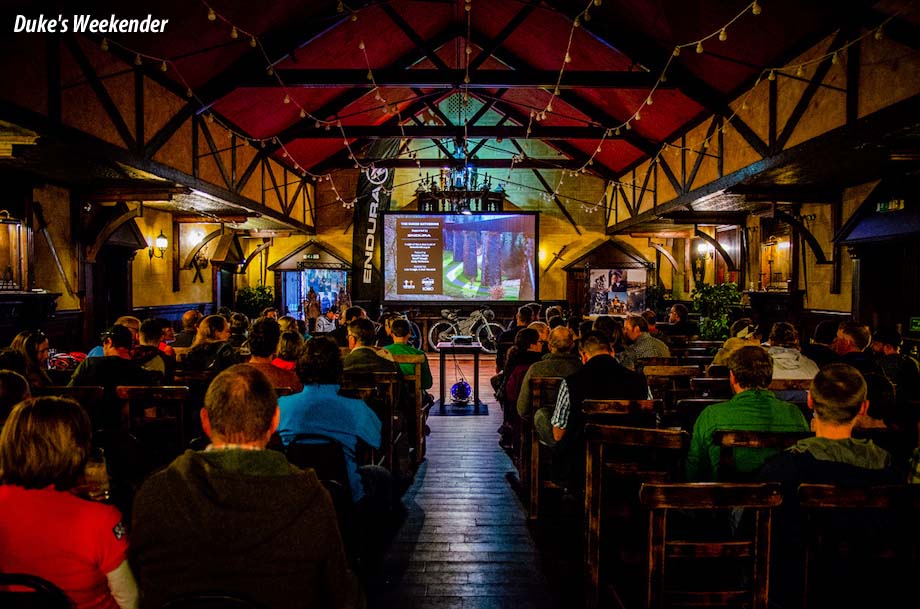 Saturday evening will see the Dukes Gathering – a cycling evening of film and talks by some legendary speakers.

The world-famous Three Peaks CX race has been moved to the 15th Sept weekend because Yorkshire is hosting the Elite Road World Championships at the end of September. If you are travelling over from N. America or elsewhere for a few weeks, this would be a brilliant month to come! Both these events are around 3.5 hours drive from Aberfoyle. 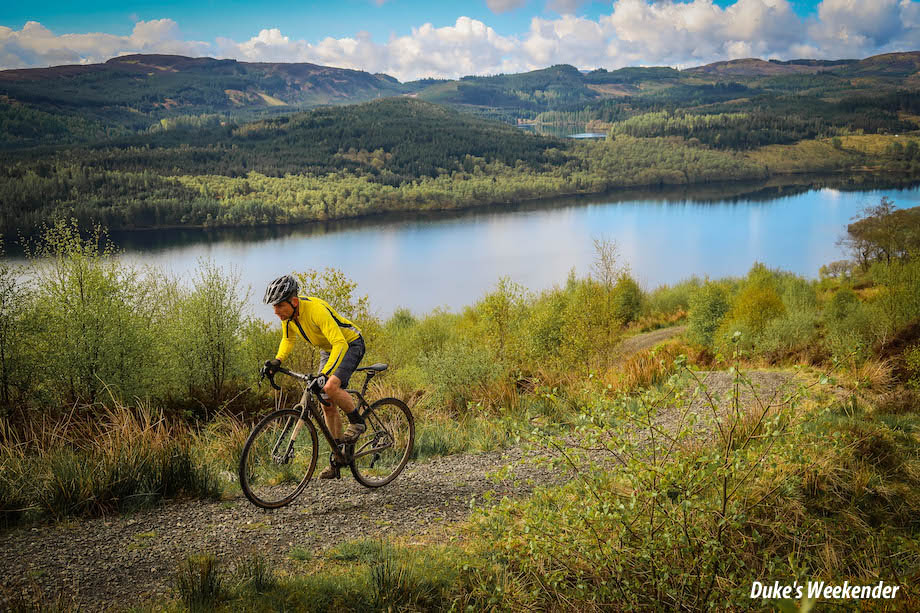 Pez: Every event has its own peculiarities. What's the big/infamous/hardest feature of the Duke's course?

DW: The Gravel Enduro offered a lot to a lot of different people. For some the flowy loch side stages stood out, or for others hitting 70 kmh on stage 4 was described as “moment of the year.” There are also loads of fascinating features on route as well as the natural beauty. We pass below the old slate quarries above Aberfoyle which closed in the 1950s but are still very atmospheric and made famous by Monty Python’s Tim the Enchanter in the Holy Grail film. In the second half the route also follows a masterpiece of Victorian engineering – a pipeline that took fresh water from Loch Katrine to Glasgow in the Industrial Revolution and pretty much eradicated cholera and typhoid in the Empire’s second city. It is still in use today and as you pass through breath taking wild scenery an occasional piece of jaw dropping engineering pops up. 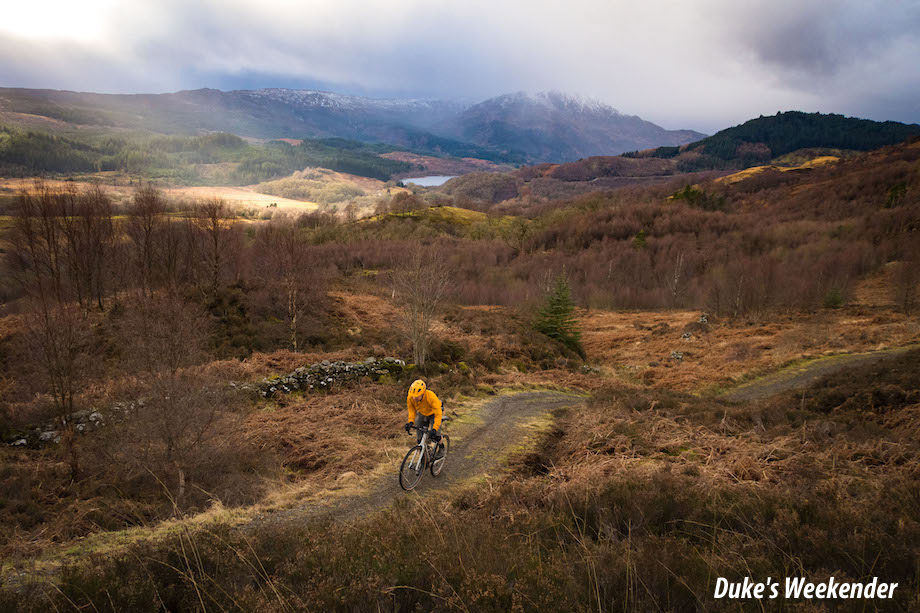 In terms of difficulty – each stage offers the opportunity to open the tanks, but as a stand out obstacle just approaching the finish line of the final stage riders are faced with a wall of a climb up above “Rob Roys Cave.” It’s short but it’s a challenge to ride it clean. It has local spectators creating more atmosphere on route. Once the riders pass Rob Roy’s (an iconic bandit) hiding place they are greeted with tea/coffee and cake provided by one of our excellent local cafes the Wee Blether at the final finish line of the day.

Pez: What are the registration details, and where can we find more info?

Registration is through SiEntries. A link can be found on our website. We close a week before the event. 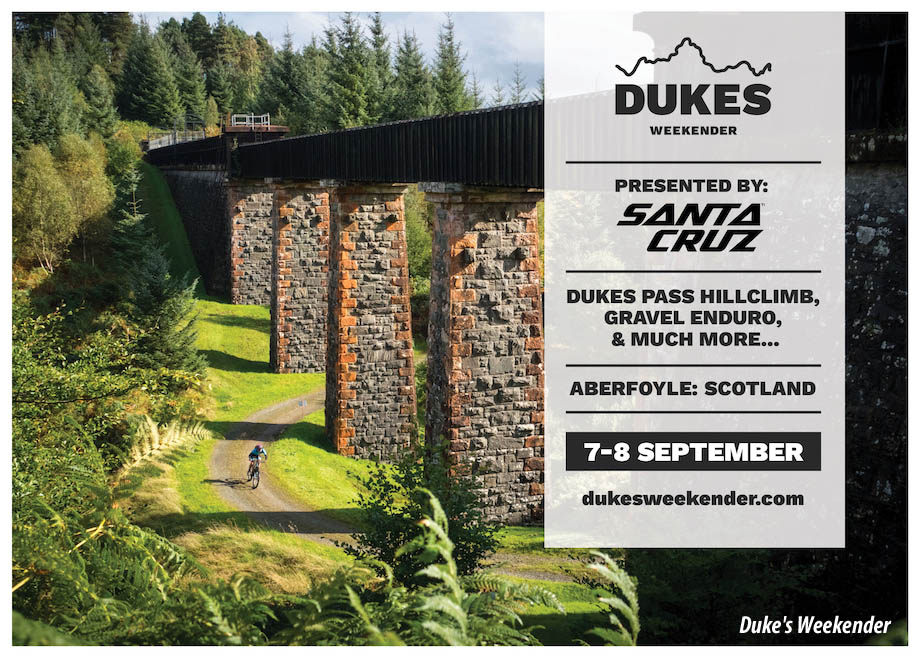 Stephen Cheung is a Professor at Brock University, and has published over 110 scientific articles and book chapters dealing with the effects of thermal and hypoxic stress on human physiology and performance. Stephen’s new book “Cycling Science” with Dr. Mikel Zabala from the Movistar Pro Cycling Team has just hit the bookshelves this summer, following up Cutting-Edge Cycling written with Hunter Allen.