On January 2 every year there is a big event in Castellania, a tiny village in Italy's Piedmont region. Cycling fans from all over come to pay homage. This year the morning began with a mass in the little church, followed by the awarding of prizes to journalists; there was a special opening of Casa Coppi, and in the afternoon a visit to nearby Novi Ligure and the Museo dei Campionissimi. Because on January 2, 1960, sixty years ago, Fausto Coppi died and a cycling legend began. 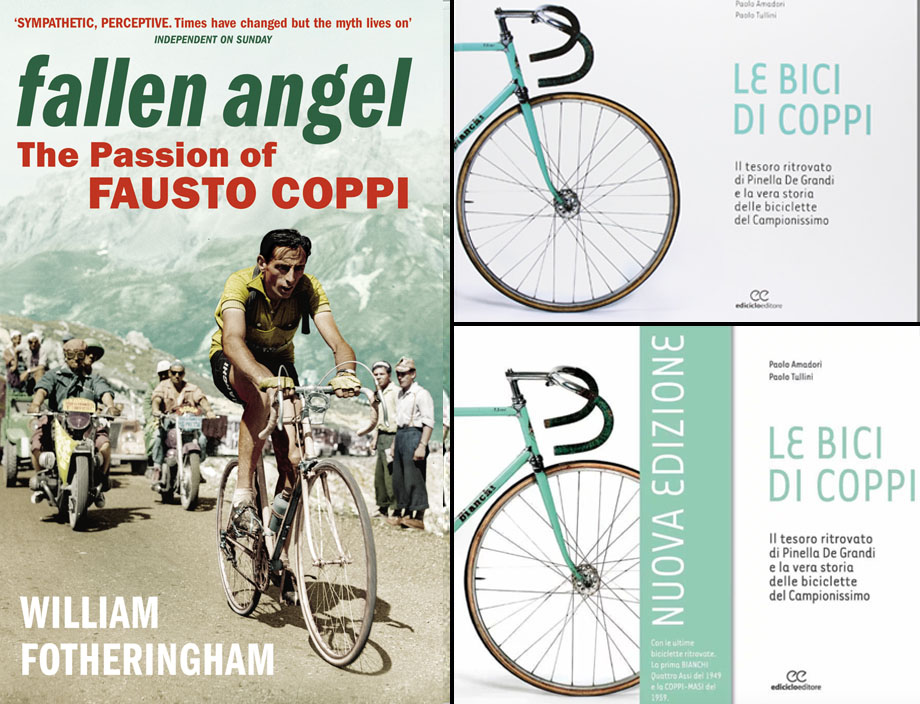 Greek dramatist Meander (342 BC-292 BC) wrote: “He whom the gods love dies young.” Fausto Coppi was 40 at the time of his death and while the greatest part of his career had taken place from 1949 to 1952, he never grew fat and old and querulous, like his great rival, Gino Bartali. His racing record was superb but others have done as well or better since. Yet deceased riders who were great in their time, like Jacques Anquetil or Louison Bobet, are not the subject of pilgrimages like Fausto Coppi is six decades on. Who is this man and why does he still haunt our cycling dreams? 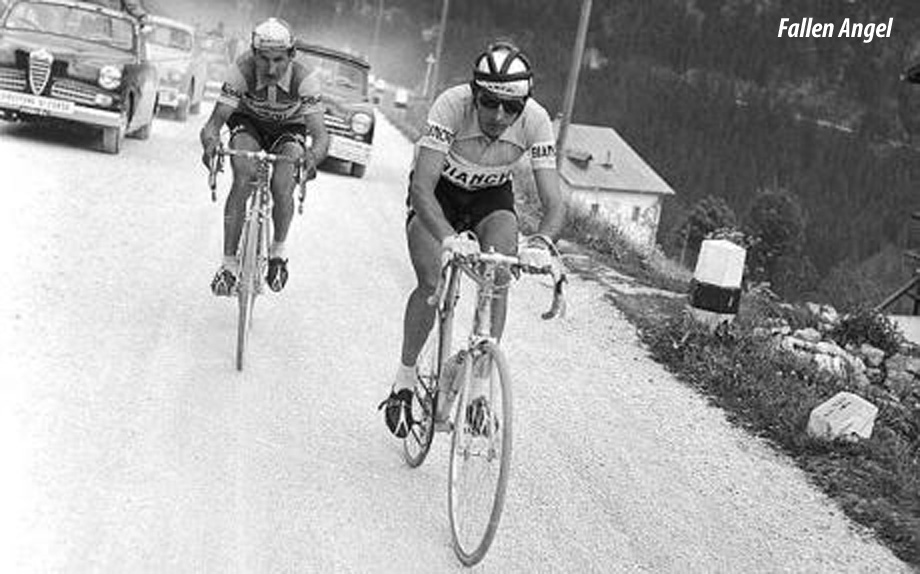 Perhaps the finest English-language book on Fausto Coppi is “Fallen Angel: The Passion of Fausto Coppi,” by William Fotheringham and published in 2009 and still easily obtainable. The story of Coppi's life is well-known but retold here as well—how he grew up in Castellania, a poor farming village, and discovered a love for cycling; how he came under the tutelage of Biagio Cavanna, a blind masseur/soigneur/coach; how he was the surprise winner of the 1940 Giro d'Italia; how his career was derailed by World War II; how he became the first rider to win the Giro and the Tour de France in the same year; how his rivalry with Gino Bartali energized Italy. World Champion, Holder of the Hour Record, the man who rode away by himself at the 1946 Milan-San Remo race and finished nearly a quarter of an hour ahead of the next competitor. A man alone. The Heron. Il Campionissimo. 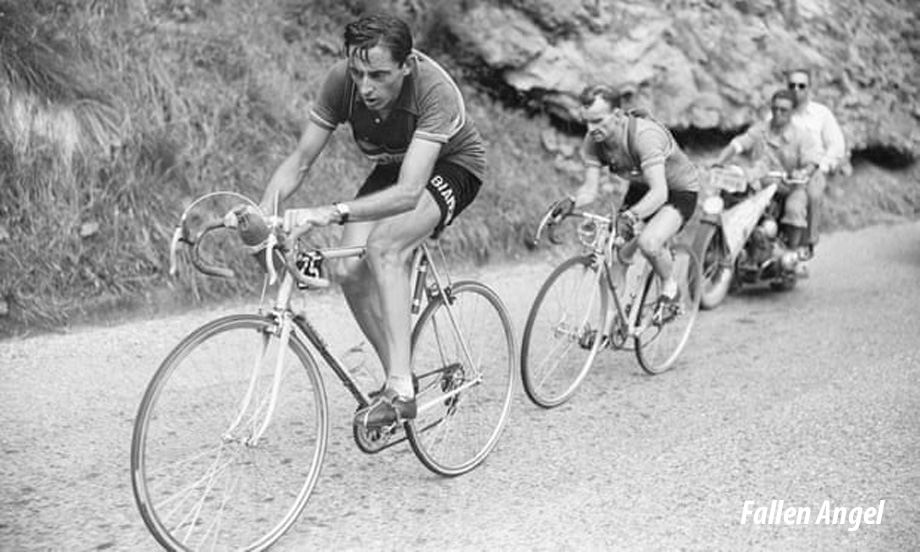 But the book gives us a much broader portrait. In many ways Coppi was the man who invented modern pro cycling in terms of how he trained and ate, how teams were built around him, how his equipment was managed and maintained. Although always slight of build (and the author discredits the story that Coppi had suffered from malnutrition as a child), Coppi was remarkably diverse in his cycling skills. An excellent climber, he was the first person to win a stage on the Alpe d'Huez during the Tour de France but was also a superb time triallist, winning the de facto world time trial championship, the Grand Prix des Nations, twice. On the track, he won the World Pursuit Championship twice. He looked beautiful on the bike and was famous for his spinning form. He was a perfectionist and a leader. 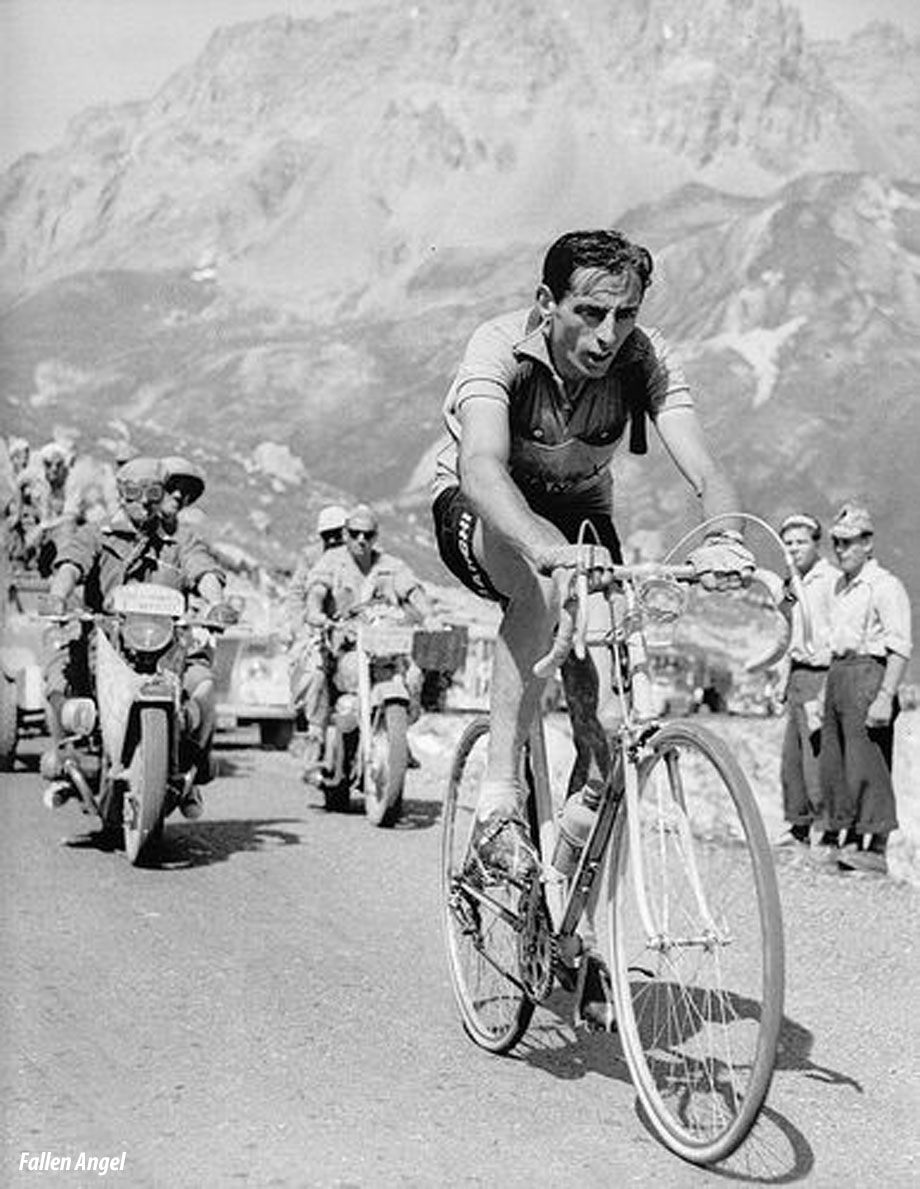 That is one Coppi. Then there is the personal life and Fausto Coppi appears to be one of those people who go through life on the outside looking in. He was quiet, reserved, and surprisingly fragile in temperament. His younger brother, Serse, rode with him on the Bianchi team and one has the sense that Serse was like the pet dog or donkey that racehorses like to have in their stable to keep them calm. Other top pros have had the same arrangement—Jean Bobet for his brother Louison; Prudencio Indurain for Miguel; Stefan Ullrich, the trustworthy mechanic for his brother Jan; Antonio Nibali, and so on. In 2009 there were still lots of people who had had personal contact with the Coppis whom the author could interview and, oddly, everyone remembers the antics of the entertaining Serse but nobody had much to really say about the inward-looking Fausto, nothing really memorable. He spoke through his bicycle, it seems. 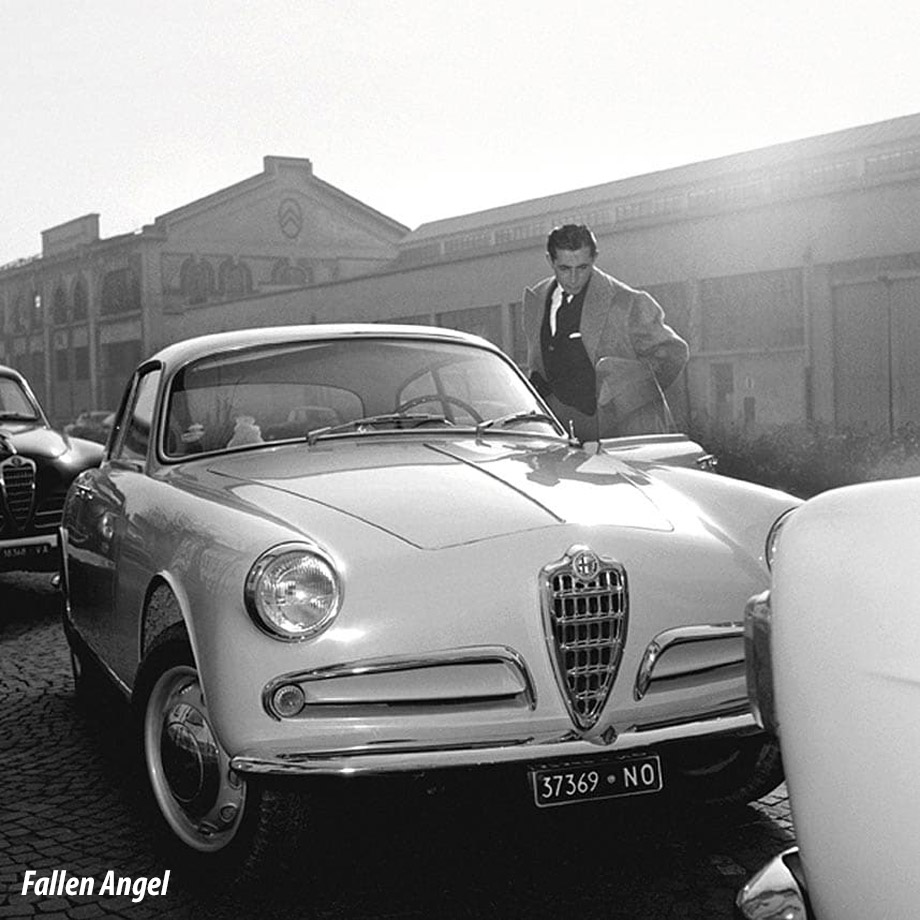 He did want to move up in the world. Although brought up in peasant surroundings, he was polite and well-mannered. As the money came in he enjoyed fine clothes and fancy cars, although his taste in homes sounds a bit underdeveloped. He enjoyed hunting and had well-trained dogs and expensive guns. Become more worldly had its consequences as his personal life changed. His marriage, entered into with a local girl in 1945, fell apart and he began a relationship with a married woman, Giulia Occhini. This precipitated a massive scandal and brings us to the third Coppi in the book: Coppi as an Italian. 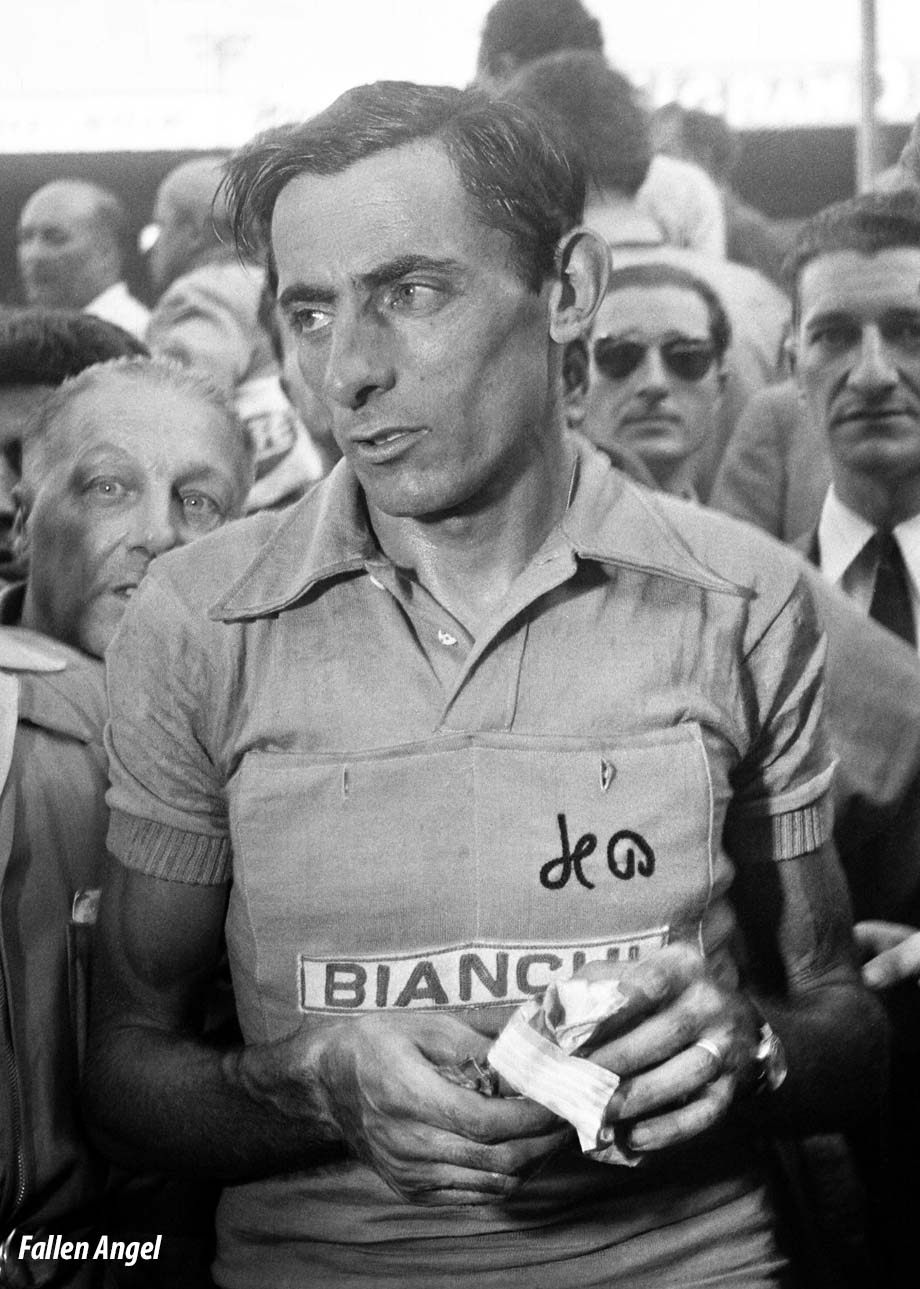 Much of “Fallen Angel” is about Italy and what was happening as the country moved from a predominantly agricultural society to an industrial one, more sectarian and less Catholic, but also how the country shifted from the authoritarian fascist state of Mussolini to a nation ravaged by conflict to a post-war democracy. In a time of national disillusionment, Fausto Coppi, the glamorous, the talented, the superhuman cyclist, gave hope. Pro cycling was resumed very soon after World War II and when Coppi won the Tour de France in 1949 it was a popular win not only in Italy but in France itself. It was said that because every town wanted to put on its best face for Coppi all the roads were paved as he rode the Giro d'Italia and approached, helping rebuild the nation. In this way he acquired part of his larger-than-life persona. 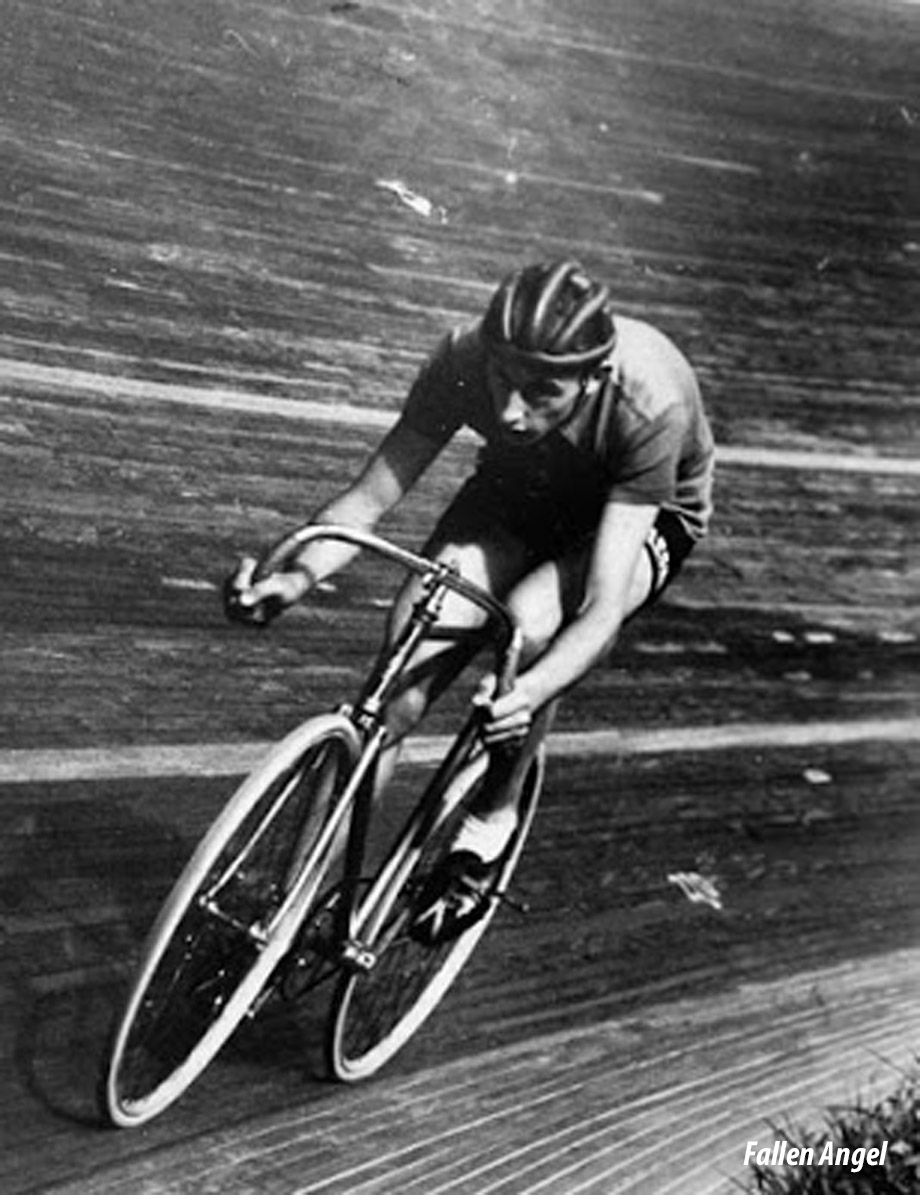 The other, albeit less positive, way was through his divorce. The invasion of privacy must have been incredibly painful for this self-effacing man, although much of the blame for the end of his marriage was laid at the feet of Signora Occhini, typically for the time. She was actually imprisoned for four days as adultery was on the books as a crime. Coppi could not escape. The Pope refused to bless the riders of the Giro one year as “there was a public sinner” among them. All kinds of people tried to interfere and have Coppi reconcile with his wife. It is all hard for us to believe today what society was like then. On the other hand, Jacques Anquetil's novel domestic arrangements remained an open secret until long after his death. The French were different, it seems. 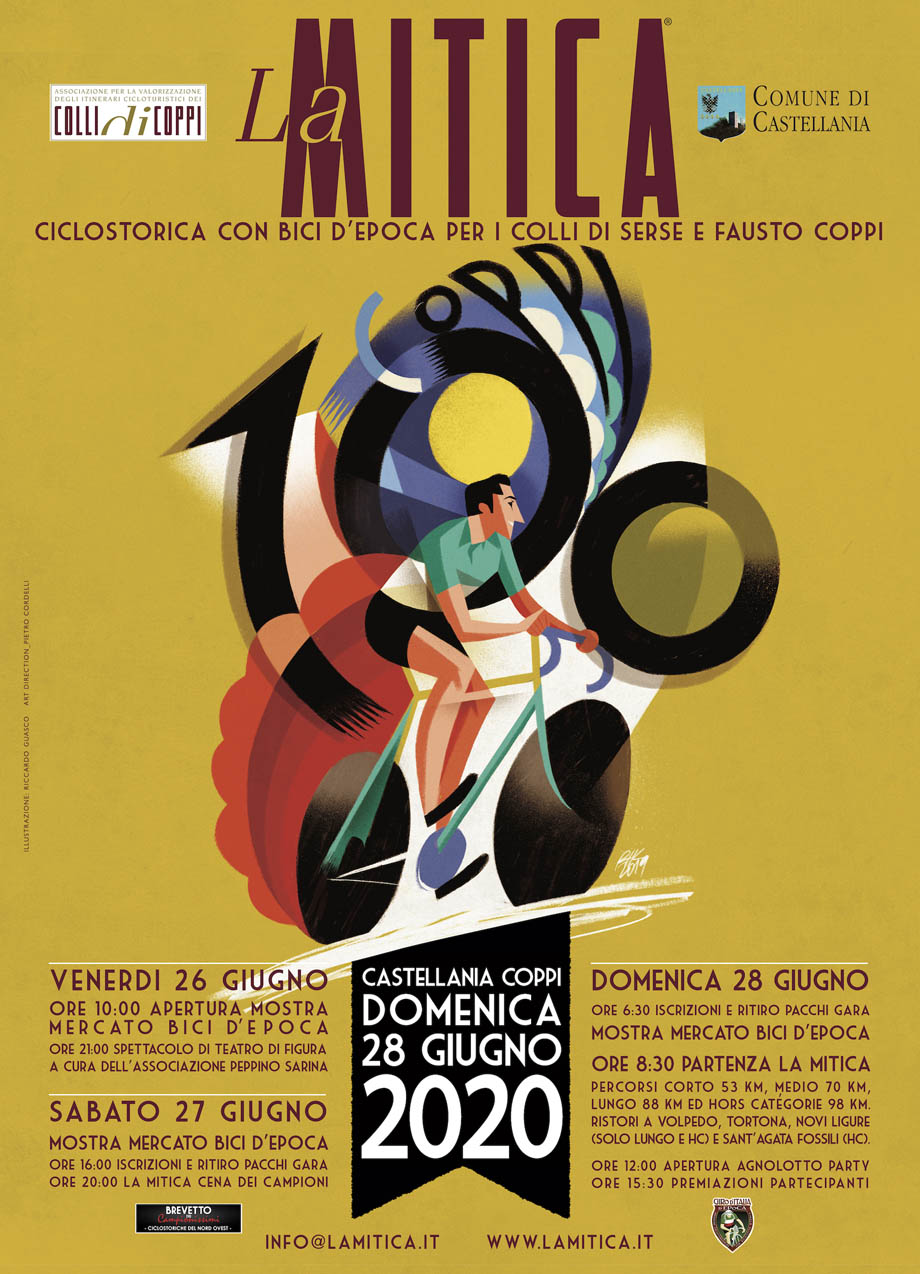 Great Cyclist. Symbol of a Reborn Italy. Public Sinner. Then all that remained was the tragic end, Coppi dying at 40 through a medical failure, a misdiagnosis of malaria picked up on a hunting trip to Africa, and the legend was brought into existence and the pilgrimages began. Every June there is a retro ride, La Mitica, similar to l'Eroica in Chianti, giving amateurs on old bikes the opportunity to ride the same roads around Castellania that Fausto and Coppi did. There are famous photos, such as the 1949 image of Fausto Coppi and Gino Bartali passing a bottle to each other during the Tour de France. Bianchi, the bicycle company most associated with Coppi's career, continues to trade on his name and story. You can visit the Casa Coppi (“The House Museum Fausto Coppi”) in Castellania, the family home, on weekends. The people of Piedmont are still proud and if you go there you can be well-prepared with their website: www.faustocoppi.it 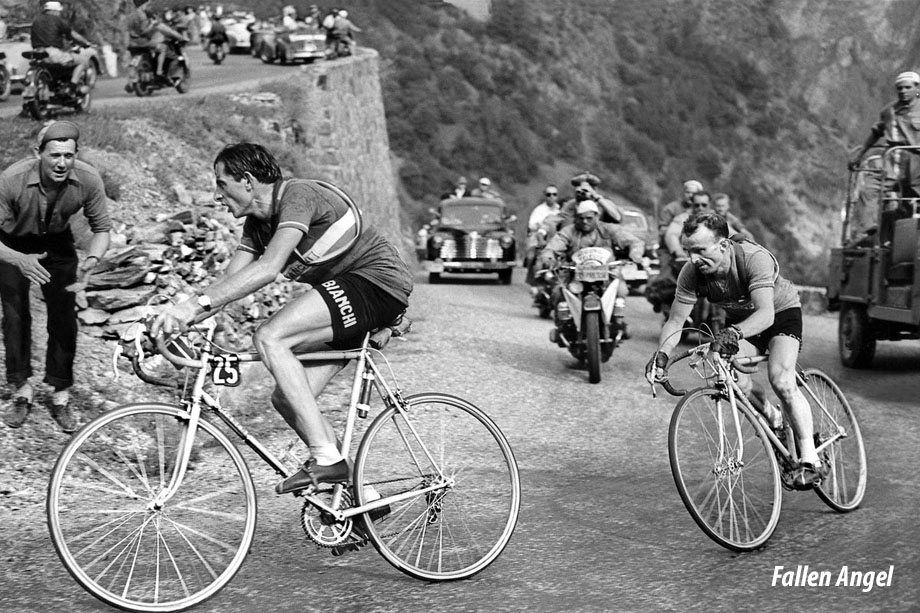 There are some great photos in the book and the visual imagery surrounding Coppi is striking in an era before television and when sporting events like the Giro only had newsreel coverage at the movies. The black-and-white photos of the period are so atmospheric, so sharp and timeless that this has also contributed to the legend, as it has for another famous rider, Hugo Koblet, who life ended early and tragically.

“Fallen Angel” is a superb reflection on these three Coppis — the sportsman; the individual; the symbol. Sixty years later we are still moved by those events and it is worth understanding why through this masterful telling.

Those glorious Bianchis of Coppi are brought back to life in a wonderful book that was published by Ediciclo Editore in Italy in 2013, “Le Bici di Coppi”. Beautifully produced, it is a labour of love by a pair of bicycle collectors and aims to fill a gap. They suggest that numerous books about Fausto Coppi have been written that focus on the man, the sporting hero, but very little on his bicycles. As mentioned, Coppi was obsessive about equipment (unlike Bartali, who seemed to suffer mechanical disasters frequently) and when he moved to the Bianchi team he brought with him Giuseppe “Pinella” de Grandi, a master mechanic. De Gandi (1908-1981) was nicknamed “The Golden Pliers” by Tour de France Director Jacques Goddet after witnessing a fast tubular tire change in the 1949 race. 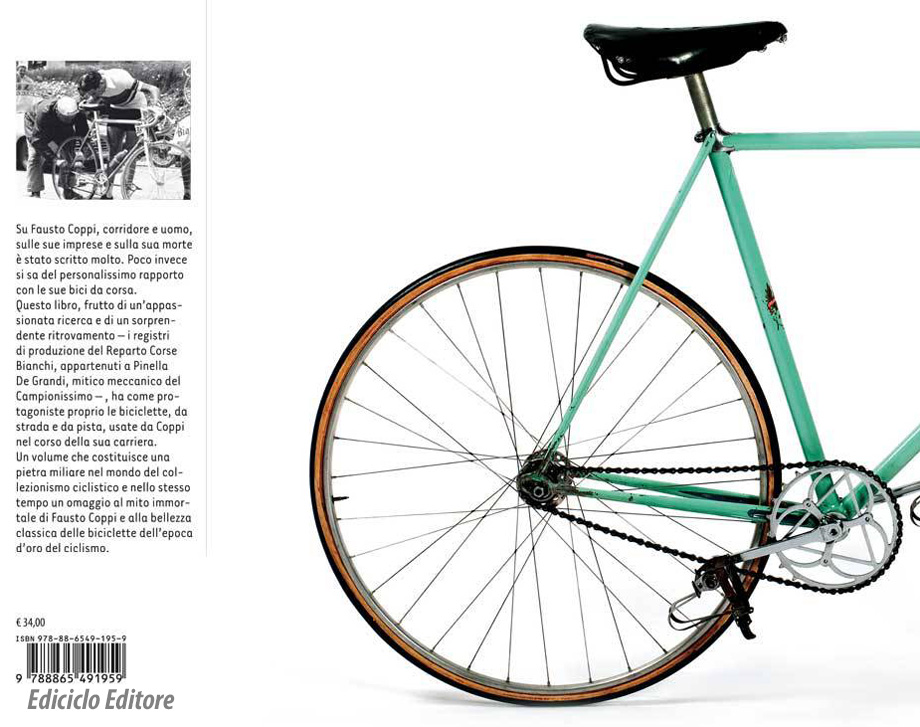 The authors discovered that de Gandi's granddaughter had a suitcase that the mechanic took to the Olympic Games in Melbourne in 1956 and it was filled with documentation relating to the bicycles that de Grandi built for Coppi and other Italian racers, along with photos and mementos. It includes the registry of bicycles made in Bianchi's famous Reparto Corse division, long thought to be lost as the company has relocated often. From these documents, it can be determined that between 1945 and 1958 (excepting the years 1956 and 1957, when Coppi rode Coppi-branded bikes), Bianchi built 70 bicycles for Il Campionissimo, with 53 for the road and 17 being track bicycles. The registry includes dates, measurements and serial numbers so one can determine if a bike credited as Coppi's actually was one. 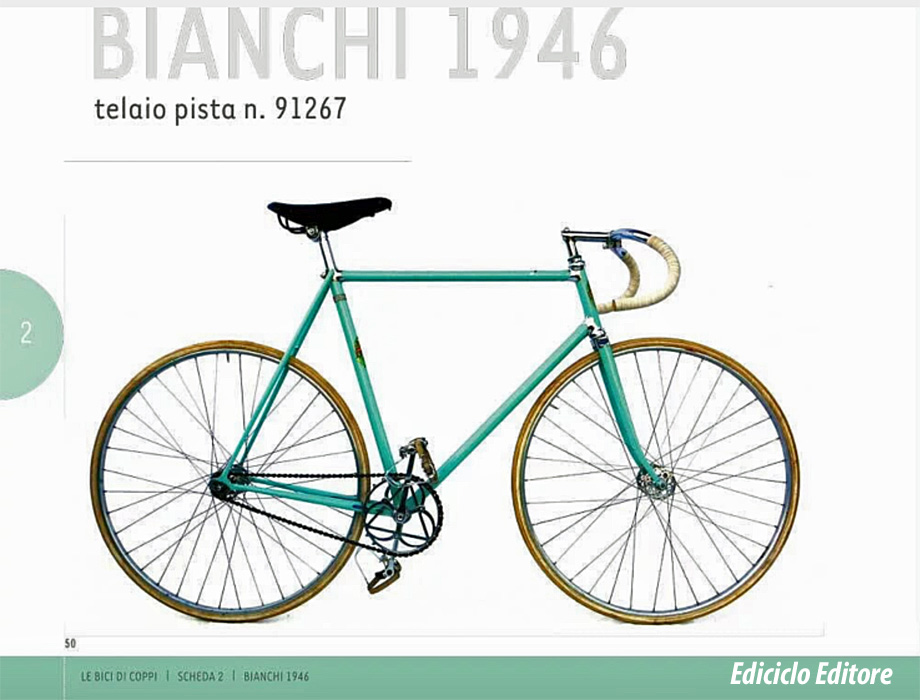 Based on the material in the de Grandi archive, the authors have identified fourteen existing bicycles used by Coppi and they are illustrated in fine photographs in the book. Each bicycle (9 road, five track) has its own story and componentry is described in detail. One always had the impression that Coppi had extremely long legs (hence the nickname of “l'Airone” — the Heron) and this is confirmed by these frames, which have 60 cm long seat tubes and 57 cm top tubes, surprising dimensions for a rider who was 5 foot 9 inches tall (175 cm). 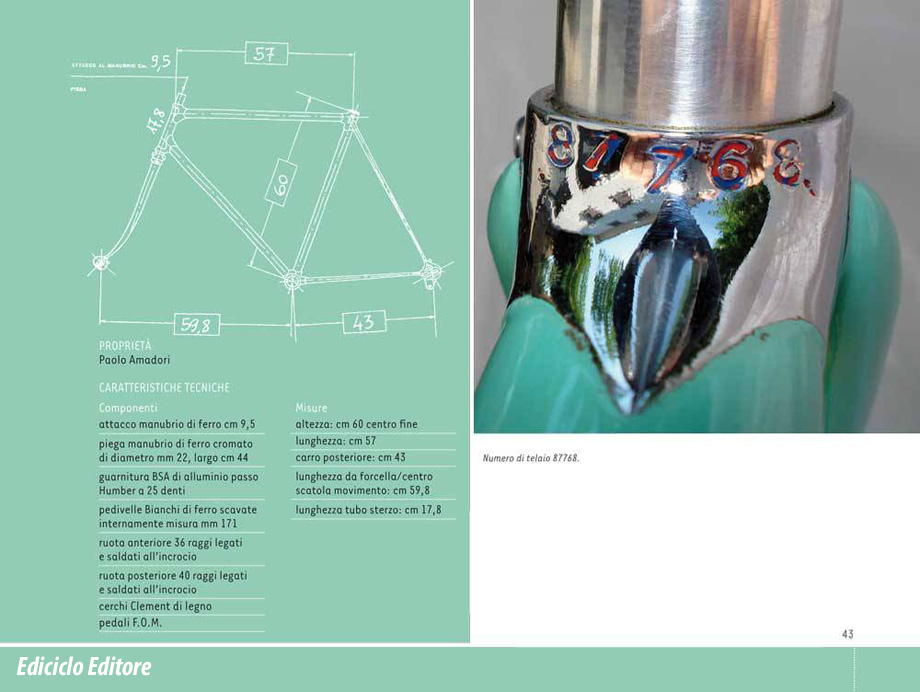 “Le Bici di Coppi” is subtitled “The Rediscovered Treasure of Pinella De Grandi and the true story of the bicycles of the Campionissimo” and is a must-have for any cycling enthusiast, even if your Italian is limited since it is unilingual. It is a gorgeous hardcover book with excellent photographs and tells a story about Fausto Coppi (the man who demanded fresh bar tape for every stage) that tells us much about a working pro athlete of the day. 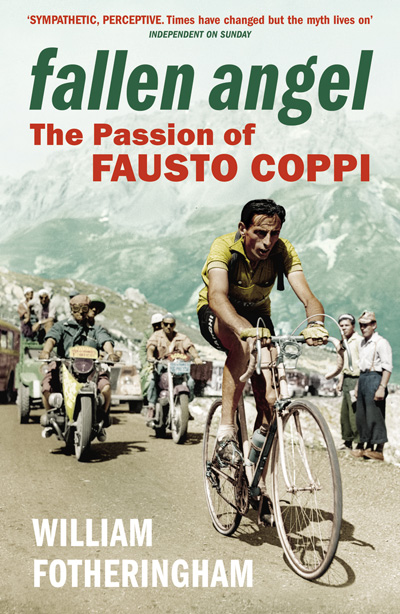 “Fallen Angel: The Passion of Fausto Coppi” by William Fotheringham is available from AMAZON.COM. 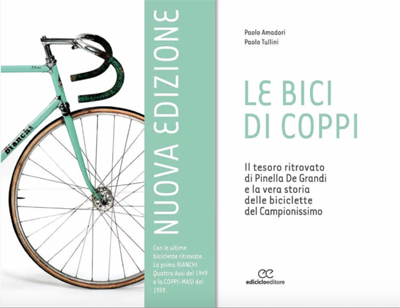 # For those interested in riding Coppi's native roads, here is information on La Mitica, the annual commemorative ride in Castellania: www.lamitica.it. #

When not dreaming in celeste, Leslie Reissner may be found enjoying an espresso or riding his ancient but beloved Bianchi Limited and looking good at TinDonkey.com
▲ BACK TO TOP ▲
Related Stories
﻿