The Peter Sagan VIP Charity ride raised over $54,000, took in some great riding around Malibu CA, and gave us a chance to get to know a bit more about the World Champ and most popular ride in the pro peloton.

The invite was pretty easy to accept – join a handful of cycling’s best journos to ride with World Champ Peter Sagan at his inaugural charity ride to support Boy’s and Girl’s Clubs of America in Malibu.  As guests of Osmo Nutrition, we were also there to find out why Sagan loves their hydration products so much. 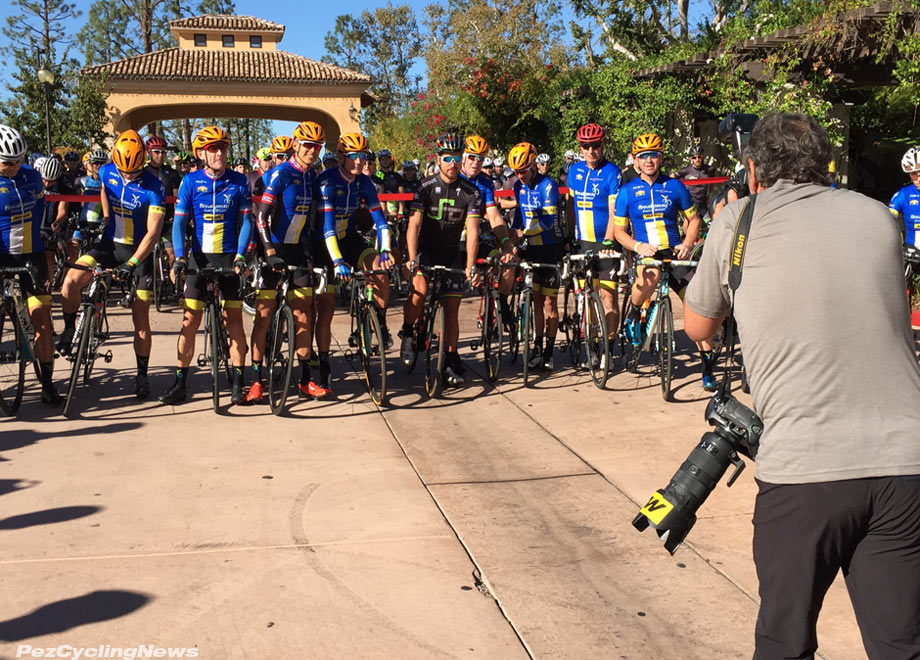 Osmo made a solid name for itself a few years back with some sound science and easy tasting and digesting drink mixes for performance cycling.  But while the products were always considered very good, the company’s business side wasn’t working, so the company changed ownership to Ben Capron and Lee Hutchinson, who convinced Peter Sagan to try the product after he cramped badly in a brutally hot stage (112F degrees) to a mountain summit in Palm Springs in the 2013 Tour of California. 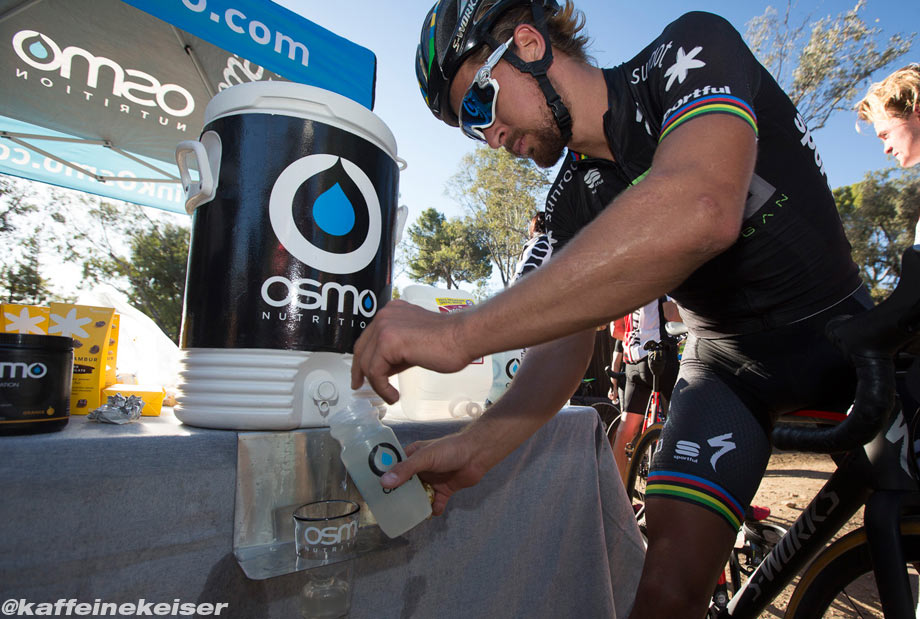 Sagan continued [from the company press release - Ed.], “I started using Osmo in 2013, after the second stage of the (Amgen) Tour of California. Stage two into Palm Springs was really hot, and I cramped, like I cramped the month before at the Amstel Gold Race. I told the team we needed to try Osmo, which I had learned about earlier that year. The whole team drank Osmo PreLoad that night, and then Active Hydration the next day, and I won the stage. I have used Osmo ever since—even through times when I had to buy it myself! I used to think that when it was hot, it was unavoidable that I would cramp at the end of a hard race. But that’s not true. With Osmo I am ready for the final—even when it’s hot, like it was at the world championships in Doha this year.” 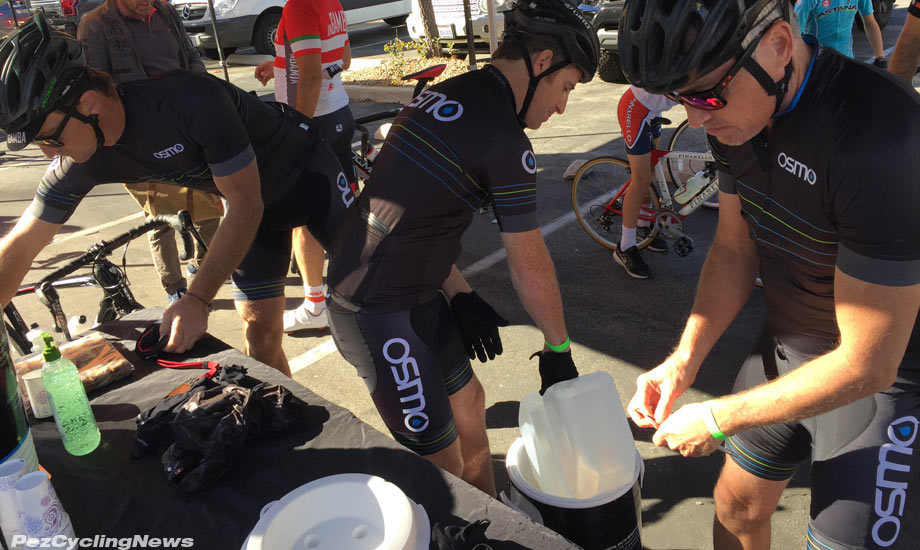 The compelling thing about Sagan’s endorsement of OSMO is that he truly believes in the product. In an era when pro athletes happily endorse whoever offers the biggest pay check, Sagan’s deal with Osmo is not about the money – because most (if not all) brands in the crowded cycling nutrition category have little to no budget to sign deals with the world’s highest paid pro (Sagan’s contract with Bora is a report 7 million euros).

But the Osmo products don't just taste good.  The company says that: "Osmo’s sports hydration and recovery products are based on peer-reviewed science to provide performance benefits to athletes. Through repeatable studies, Osmo Active Hydration has been proven to improve cyclists’ power output by an average of 9% compared to other sports drinks."

I can tell you the drinks tasted good and gave me no digestion issues - even after a 5 hours of sweating on the bike and eating bars and race food. I followed their advice and drank lots, plus enjoyed a bottle of their recovery drink (which was laced with cinnamon) with a couple cold beers after the ride, and amazingly I felt great for the rest of the night and into the wee hours, which included a lot of standing at the after-hours bar.

See the Osmo Nutrition website for more info and where to buy it. 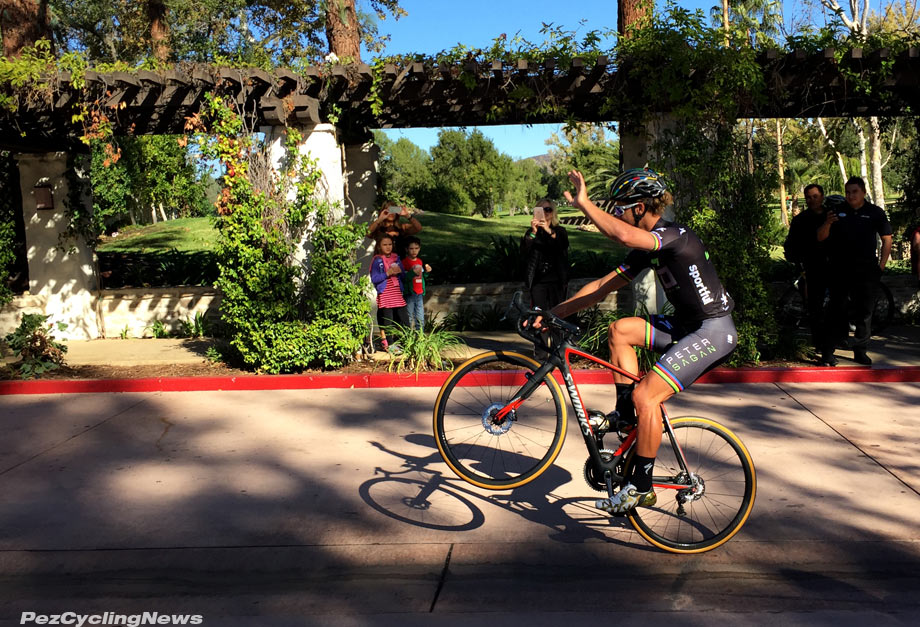 Peter makes his signature entrance to the start.

The Ride
Peter wanted to put on a high-end event that was more than just a gran fondo style ride - so he built a whole weekend that included a couple nights at the very nice Westlake Village Inn in swanky Westlake California – think rich suburbia. After a casual Friday night cocktails and reception dinner, there was a big ride Saturday through the mountains to the Malibu coast and back offering two loops of 60 & 80 miles, followed by a gala dinner that included a live auction to raise money for the Boy’s and Girls’ Clubs of America (two signed jerseys fetched over $2000 each). Bob Roll was on hand too for the ride and his always colorful and entertaining commentary ensuring everyone had a few laughs.

But the area is also home to some awesome roads and great rides - so putting together a 60 mile and 80 mile route was easy- taking in climbs between here and the coast in Malibu.

The weekend was full of cool surprises – maybe the most unexpected was the moto stunt show by professional moto star Jason Britton- who basically dazzled the riders before our ride start Saturday morning. We were all secretly hoping Peter might jump on the moto for a couple trick of his own, but he signed off his arrival to the start with one of his own patented wheelies - which was just fine with us.

But the best part for me was meeting some of the 200+ riders and guests who’d stepped up to support the cause and ride with Peter. New friends and stories were made, exaggerated and posted, and everyone had a great time. 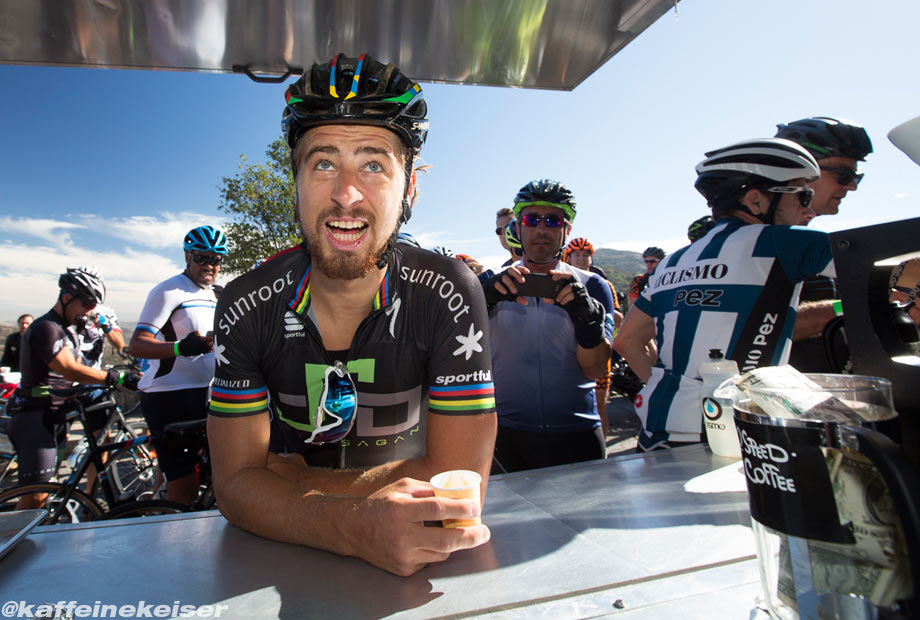 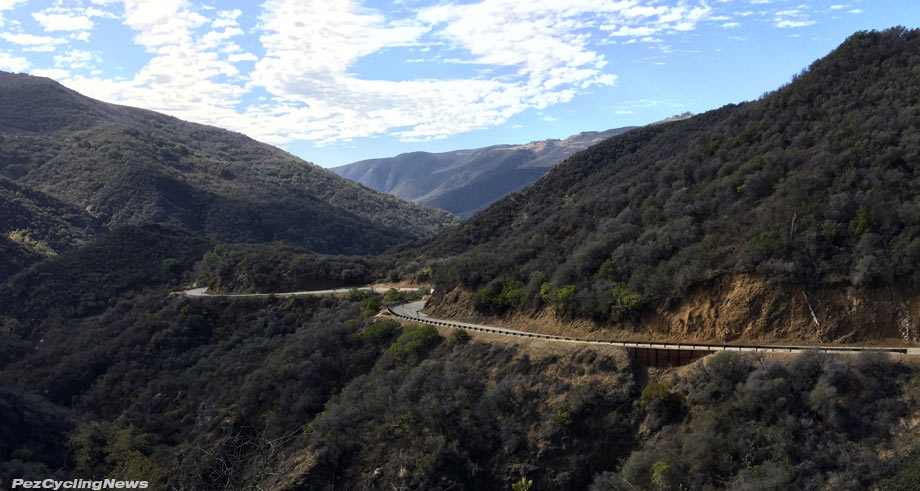 The Mulholland Highway climb featured twice on the long route.

The Sagan Interview
We were treated to a round table interview with Peter, which can be a funny thing when you get a handful of North America’s best known cycling journos at the table. This was my first time meeting the World Champ, but seeing him in action was exactly as I expected from watching his public version of himself. As a young guy who's on top of the world, he's still humble, gracious, shy, and doesn’t try to invent answers he doesn’t have. He still seems a bit surprised by all the attention, but seems to be enjoying it for what it is as well.

I asked him a couple questions about his popularity... 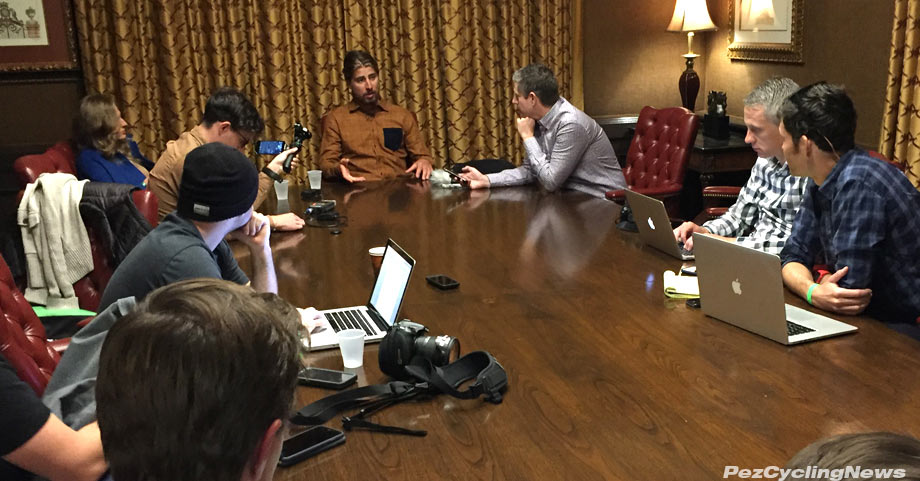 Pez: Cycling has lost the big personalities we had in previous generations.  You're kind of the new personality of cycling and it's a lot of fun to watch you race. How does your popularity play into your training, motivation, and affect your job?

Peter: Well, it's part of the job, right?  If I don't win, then I'm not popular, then nobody will care about me  [lotsa laughs from the table here].

Pez: Is your popularity tied to whether you win or lose?

Peter: From the start for sure, if you are not winning then it's not.  Now maybe I start to have more fun, and do wheelies, but this is from my personality because I was winning.  If I'm not winning I never do something like that... and if I do then nobody will care.

On Making People Happy
Peter: There's a lot of luck in what I did - in Richmond I was good, and in Doha it was a little bit of a lottery for sure, and I won also Flanders - it was a big race for me and I thought it will be a good season.  Then Tour de France I won the Green jersey, and again there my season is finished - and I just continued doing my job and doing good.  And the European Championships and World Championships looked easy but it's not easy.  I did things maybe more relaxed, but still I was training well...  If someone asks me for a photo selfie then for me is no problem, because if I can make happy some people, then it's good.  Because if I am happy, then everybody has to be happy.  [more laughter]  The most important is making other people happy - because otherwise it's a bad world , no?

From here Peter admitted that the wheelies and videos are "for the people" - giving up that he doesn't need to do those things for his own happiness. 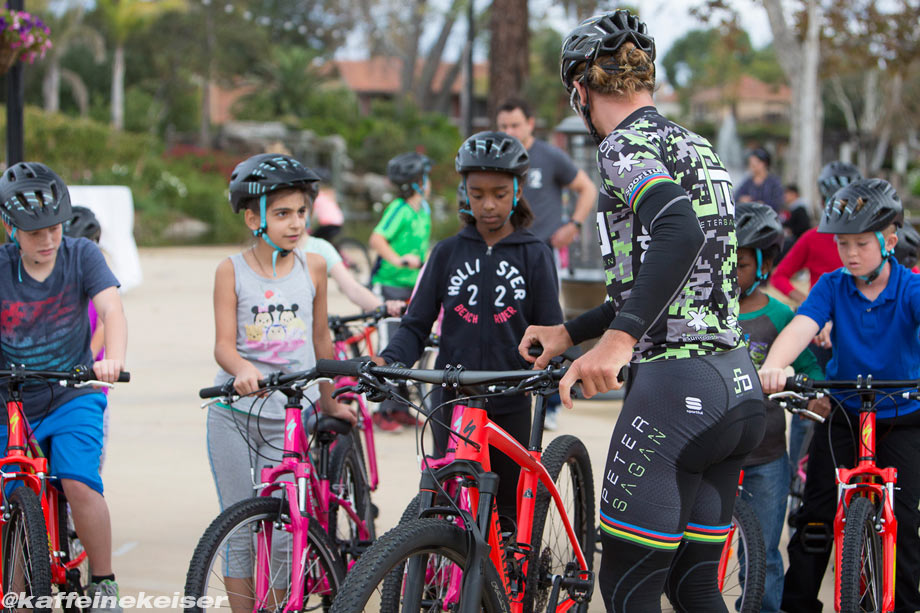 All in the Peter Sagan VIP Charity event raised over $54,500 for the Boys and Girls Club of America. 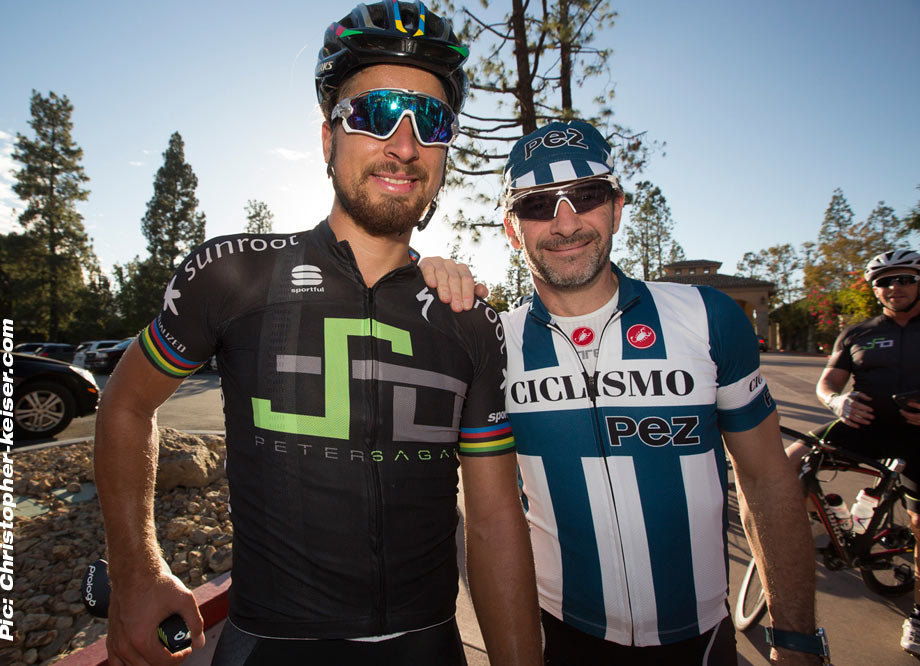