Doping and sexism don't usually appear together in a cycling article, but you can rely on Lee Rodgers to combine both subjects in his Lowdown. Welcome back Mustafa Sayar to the Tour of Turkey, we have missed his EPO fueled victories and good-bye Jess Varnish, British Cycling don't want you. All sounds a bit unfair.


You know it’s a normal week in the world of cycling when absolutely nothing normal happens at all, for this sport seems to be guided by that old proviso which states that the only thing we can be certain of is that we can be certain of nothing. And yet, in a very swift move which will do nothing but contradict what I just wrote, what happens week in and week out in the cycling world, whilst it may at first appear to be bafflingly disconnected and just plain freaking weird, it does in fact follow certain rules that bear evidence to a thread that runs deeply through the fabric of it all. 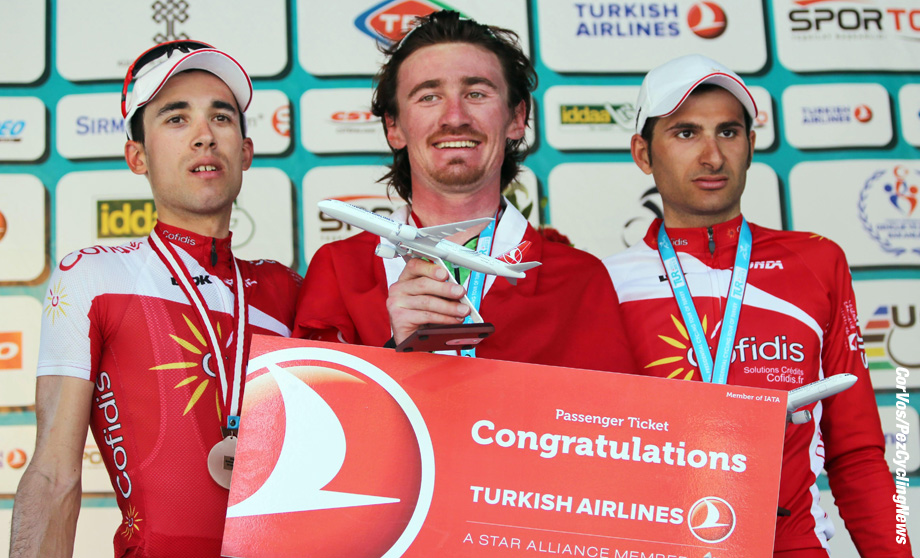 First up we have Mustafa Sayar who is back at the very race that he disgraced after being stripped of the overall victory in 2013 for testing positive for EPO. Yes, he’s back racing in his native Presidential Tour of Turkey despite having announced his retirement from cycling after he got busted back in 2013. 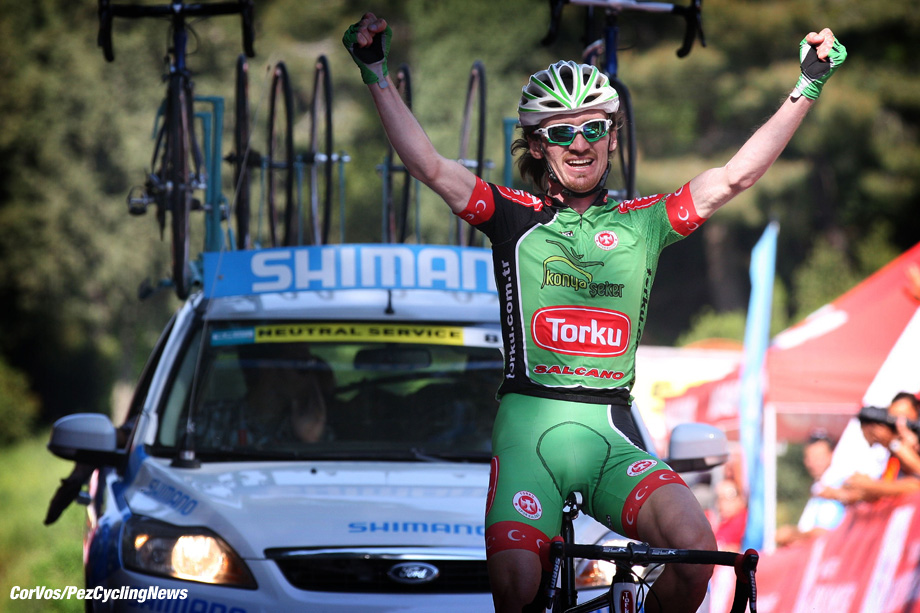 "I don't know how my form is and I'll need two days of racing to figure it out," Sayar told Cyclingnews on the start line in Turkey. "Since I finished my penalty last year, I only took part in the [2.2] Tour of Mersin last week [he finished fourth overall while his teammate Nazim Bakirci won it]. It was an international stage race but not of the level of the Tour of Turkey. But I'm ok, don't worry!”

Phew, rest easy folks, we can now stop worrying about the form of Mustafa Sayar, which I am sure was giving us restless nights. Mustafa must have been as thrilled with the soft questions he got from CyclingNews’ journalist as he was with his return to the sport, part of that info-package that prospective dopers receive on the way through the doctor’s door. 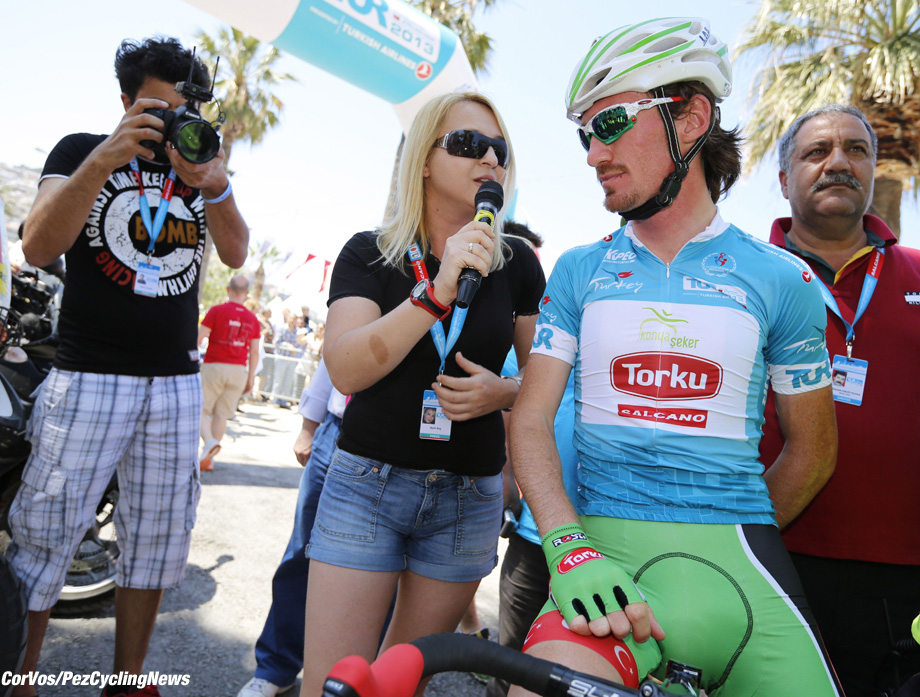 “Fear not, young man, for this is only cheating if you get caught and, if you are stupid enough these days to do so, you’ll get a shortish ban and a slap on the wrist and when you do return, the journal from the biggest publications will be throwing you only softball questions anyway. NEXT!”

It’s not shocking he comes back but what strikes me as madness is this: why is he allowed to come back to the very race that he disgraced? Yet this situation has been rendered absolutely normal, despite it being crazy when you actually think about it. As a race organizer I can tell you that there is no way in hell I would be ok with a guy who doped through one of the events I work on coming back to race it. It’s not just Turkey, happens all over, at the Tour de France, the Giro and the Classics. Guys get busted at these events then hey presto, get welcomed back after their bans are up. 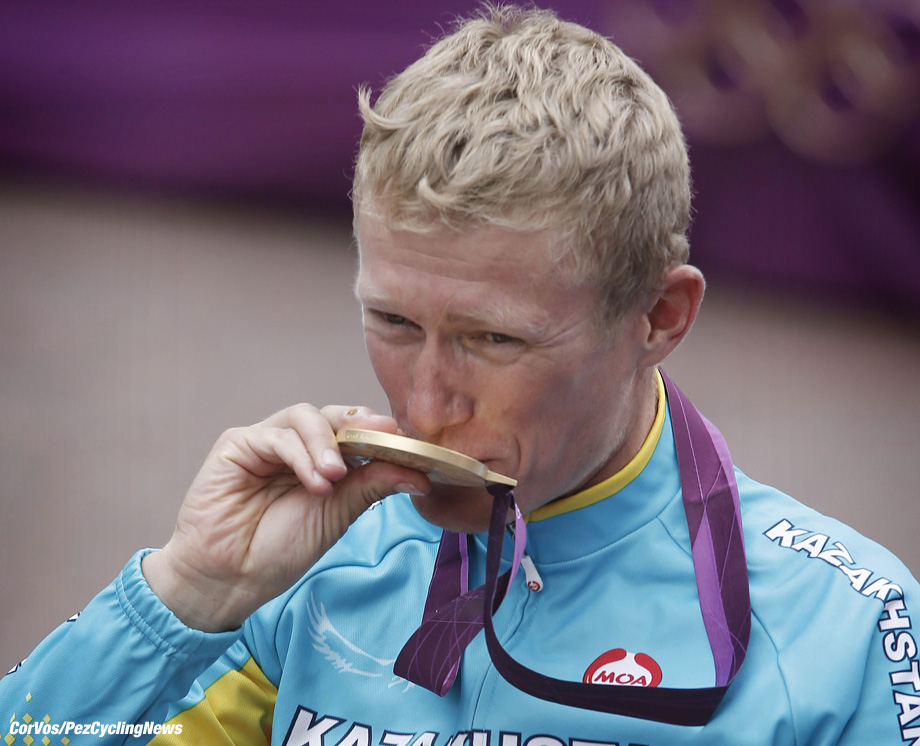 Vino at the Olympics

What’s the message here? ‘Everything will be ok in the end, my son…’

In other news, it will now be ok in the USA for people to ride using testosterone. A new ruling by USADA will allow riders to compete whilst using medically prescribed testosterone, however “an athlete must prove to USADA that he or she is unlikely to actually win one of these amateur races, in addition to proving a medical need for an illicit chemical.” (USADA).

Where to start. So, there are people out there who for whatever reason do need to take shots of testosterone to get their levels up to normal, due to medical conditions and/or loss of testes. I can see that, and I can also see that some of them may love bike racing. However, first of all what kind of oversight will be in place to make sure the system doesn’t get abused? The UCI and other cycling bodies have not exactly done a fantastic job in that regard before. Also how exactly does one prove that one isn’t in it too win it? That line in particular reflects a thought process that is about as firm and well-shaped as melted fudge. Riders on these TUEs (called Recreational Competitor Therapeutic Use Exemption), that aren’t even in for a podium spot will inevitably be in position where they still can affect the outcome of the race. 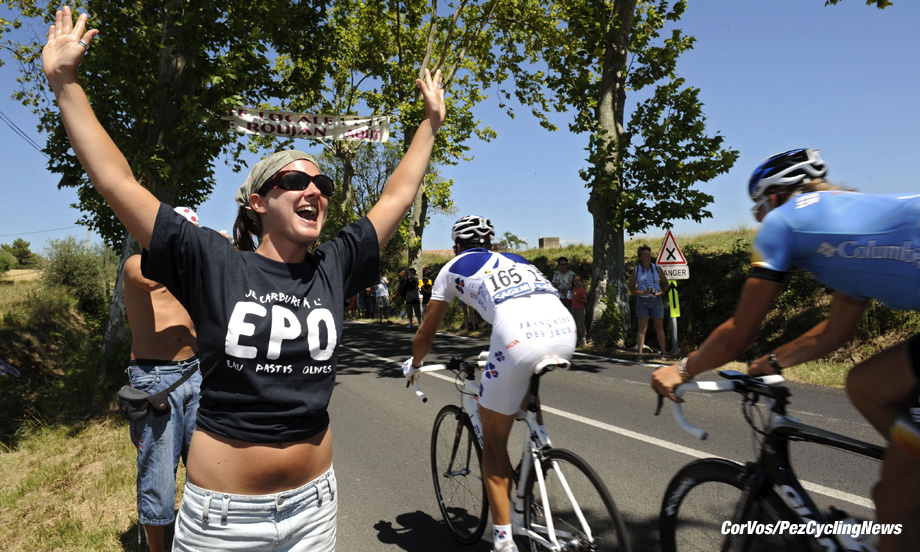 And then what if a guy comes along with anemia and low hematocrit numbers? Does he or she get an EPO TUE? I really don’t know, I wouldn’t want to tell anyone they cannot race because they have an illness and maybe there’s a way for this to work but, I feel that USADA and whoever else is involved in this decision has made a cack-handed attempt at making it possible for the rest of us to comprehend.

And last, but let me say in no way least, to the women’s cycling. Two developments here caught my attention this past week and both are evidence of how depressingly backwards attitudes still are in regard to women’s cycling, and yet nether truly have shocked the cycling world because, well, they just seem so normal, business as usual.

First we have the case of Jess Varnish, the British cyclist who was allegedly told to “get on with having a baby” by British Cycling coach Shane Sutton as, at 25 years of age, she was deemed too old to be in contention for a spot on the British team.

There were other factors involved, namely Varnish’s results, though there’s no denying that the British Cycling Federation has for many years neglected the women’s section of the sport. One person who has first hand experience of the sexism at the heart of the BCF is Nicole Cooke, who wrote an article in The Guardian defending Varnish and criticizing Sutton, with whom she had her own run ins in the past. 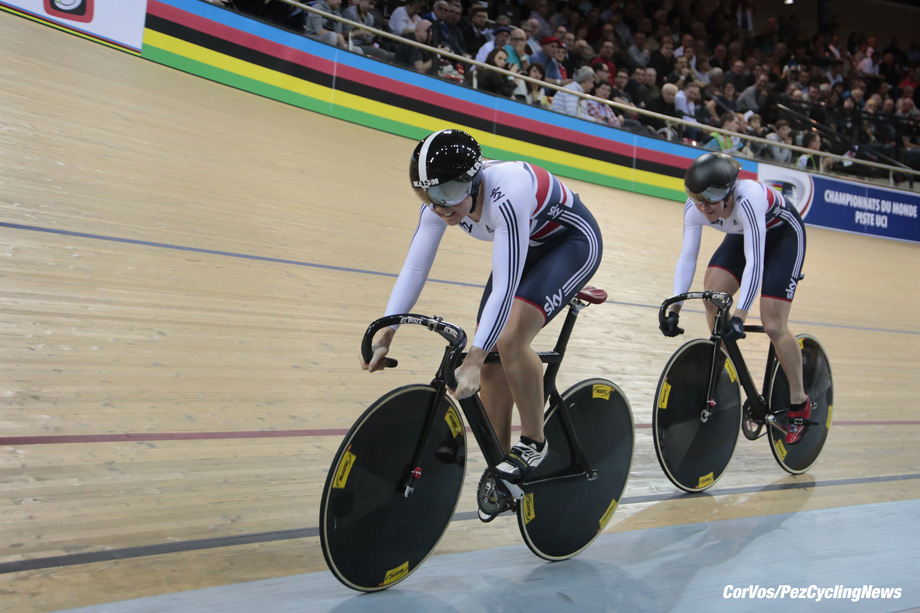 Varnish and Williamson at the 2015 track Worlds

“The men get all the glory and TV coverage as they are doing a 'proper job',” she writes, “while the girls are 'allowed' to be there on the day. That would be sexual discrimination by design. The rewards would follow the coverage, so the men would get the prizes and the girls some token gifts. Welcome to the reality in the world of elite cycling where sexism is by design. And cycling is not alone.

“When challenged, those at the top of these sports are well versed in the platitudes they need to put out to deflect the temporary criticism. A well-crafted statement of intent, a desire to rectify; but the reality is decades of inaction. Sexism spins all the way down from the top to the bottom. Somewhere in the middle of this are Shane Sutton and Jess Varnish.”

She’s right, and anyone who would argue against is nothing less than stupid or willfully misogynistic - or both, as the two do both go hand in hand. What will happen here, once the initial hullabaloo has died down (and it wasn’t exactly a cacophonous din in the first place), is absolutely nothing. Sutton will retain his job, Varnish will be labeled a trouble maker as Cooke was, and the world will trundle on as before. 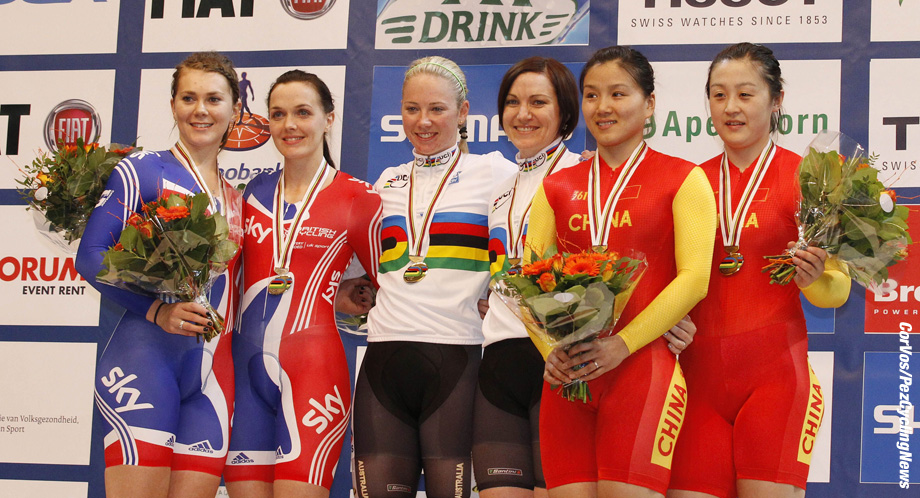 Jess Varnish and Victoria Pendelton on the Worlds podium

New Assos CEO Phil Duff cited an embarrassment with the ‘old’ Assos approach in a recent interview with CyclingTips.

“Yes, I am quite painfully aware of how Assos has portrayed women in the past,” said Duff. “Not only do I know that from the marketplace, but in my first few weeks of getting involved with Assos, I’d come home every night and my wife would say, ‘when the hell are you getting the naked women off their website?’” 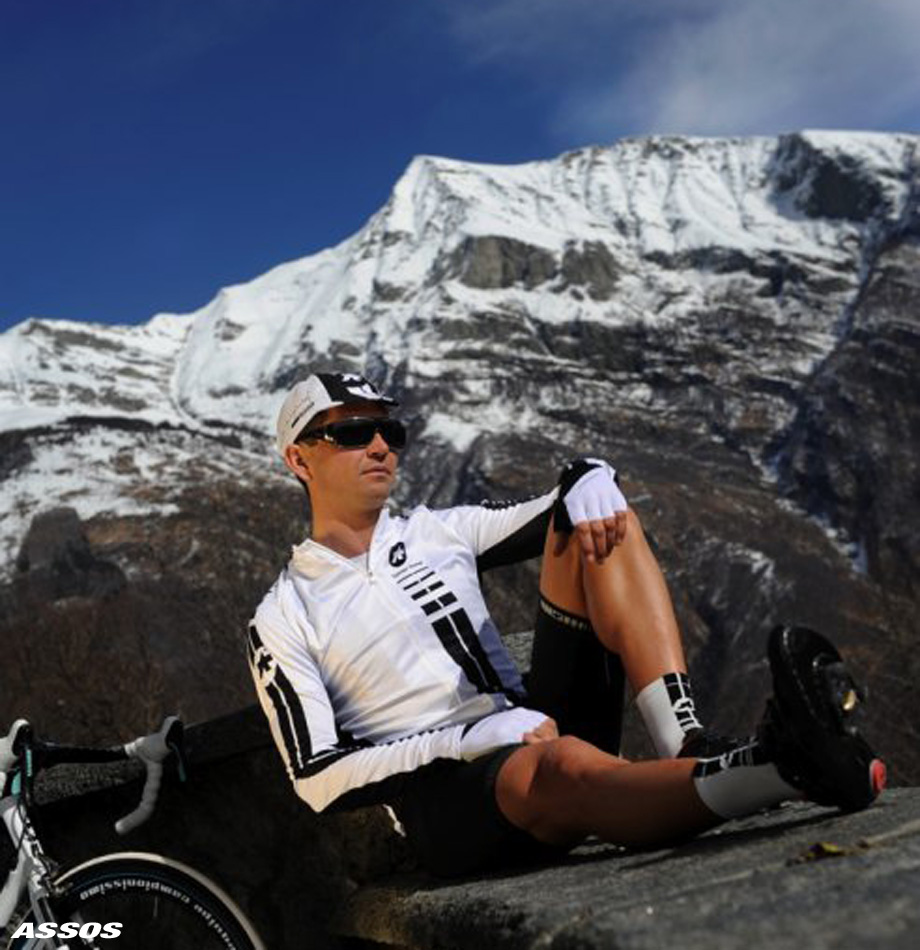 It’s great that women cyclists will now be portrayed as the athletes they are and not as a reflection of men’s fantasies but, well, sometimes the old adage ‘better late than never’ is just not fully satisfying enough. 25 years late is pretty damn late. . .

But then again, hey, this is cycling, where the absolutely absurd seems absolutely normal, all the time. . .

Lee Rodgers is a former professional road racer on the UCI Asia Tour circuit now racing MTB professionally around the world. His day job combines freelance journalism, coaching cyclists, event organizing and consulting work. You can keep up with his daily scribblings over at www.crankpunk.com.